Decided to start a new nano tank in my kitchen where I'll be moving some of the LPS (and possibly SPS) from my 32g tank. I'm rescaping that tank and going in a different direction with it. Here I'm gonna be documenting this new tank (which so far I'm very happy with) I'll also post any links if anyone wants some of the same bits and pieces.

To start, I was heavily inspired by a couple other tanks, mainly a @pongpit one from a few years ago. I liked the floating aesthetic and that it was.. somewhat on a budget. I went in a slightly different route with my rockwork, I wanted it to look like it was floating, but also to look like the rocks were coming out of the glass.

I was going to use a basic 10g Aqueon tank for the build but when I was removing the rim I cracked the glass and also cut myself so instead of trying again iI just found another option. I got a Lifegard Aquatics 10g aio. I like the aio aspect so i wouldn't have to buy extra filtration parts, the rimless look is great and the build quality is better than i expected.

I also got 5lbs of Marco rock from BRS and a 10lb bag of Nature's Ocean Samoa Pink sand (which i've been cycling so i can get the tank started once i'm done with the rockwork. I'll also be taking some bio media from my other tank to put in this one.

I started by taking a hammer and screwdriver to the rocks to chisel them into smaller, more manageable pieces.. only to put them back together later lol. I'm using super glue and the Nature's Ocean 2 part epoxy putty they sell at every fish store. I figured since the rock is white and the putty dries white-ish it's fine for now. 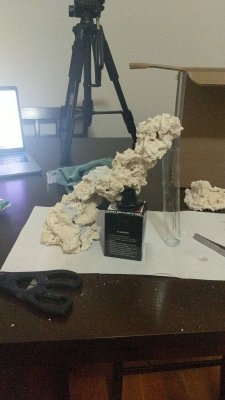 So here comes the hard part. Now I had to find a way to get the rock to stay on the sides of the tank. For this I used a mixture of silicone and VERY strong magnets (which I also covered in silicone in the hopes they won't rust or whatever) I used two pairs of magnets for the larger rock structure and one for the smaller. I attached them to both sides of the rock so it would help keeping them up and keep some stress off the silicone that's keeping it on the walls. The tricky part was trying to keep things propped up the right way until it all sets. 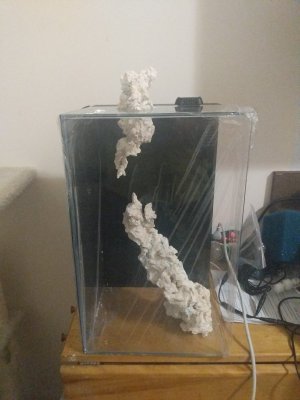 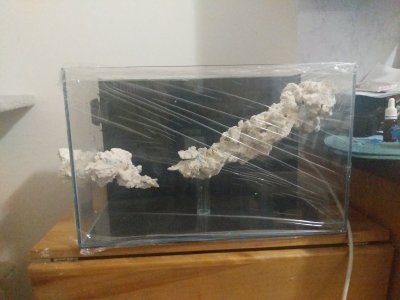 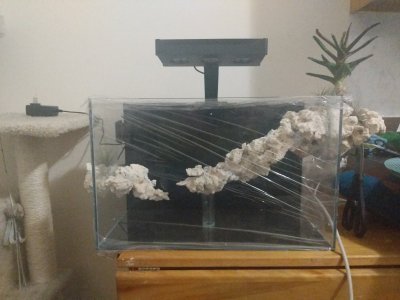 Look great, looking forward to seeing how it turns out
OP
T

Day 2: I've had the sand sitting in a bucket with some water for a few days and have been dosing it with bacteria. I'm using Aquaforest Bio S.. which I've never used before, just wanted to try something new. Bacteria is bacteria. Now that the silicone is cured, everything is dry and the rock can float on its own it's time to add the sand and water and a few other things. I just got a new RODI system so it was really great not to have to wait like 3 hours for a 5 gallon bucket to fill up. I also added some cycled bio media from my other tank. Now to wait for the clouds to settle. 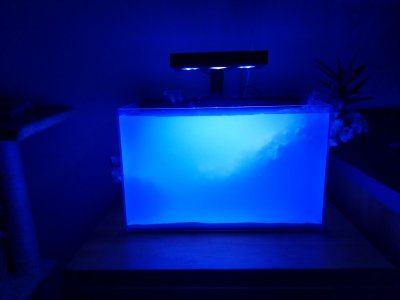 Day 3: Water is clear, parameters are good. I moved two rock flower anemones and an anemone crab that's been hitchhiking on them since I got them into the tank, probably prematurely, but I couldn't keep them in my other tank. I don't think it's a problem since I'm using established media from the other tank but I'm gonna monitor them for like a week, since I wouldn't normally put anything in the tank for at least a couple weeks. 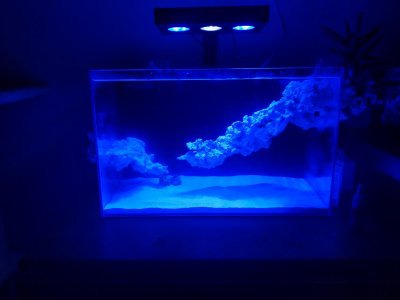 Two questions for anyone who might have an answer:
1. I'm thinking of adding an extra DIY led light on this tank to compensate for the spectrum, probably with two UV's covering the 360-400nm spectrum as well as a lighter blue to make up for some of the cyan/green spectrum and possibly a red. What do we think about that? I'm on the fence about it because I've seen some high end lights not utilize these colored led's and be just fine in growing coral. I'm also trying to get the best coloration for when I do move coral in this tank.
2. Does anyone know where I could get a glitterbomb goni? I've only ever seen it on Tidal Gardens and usually in a goni 4 pack.. and always out of stock the second it goes up. This is what it looks like. 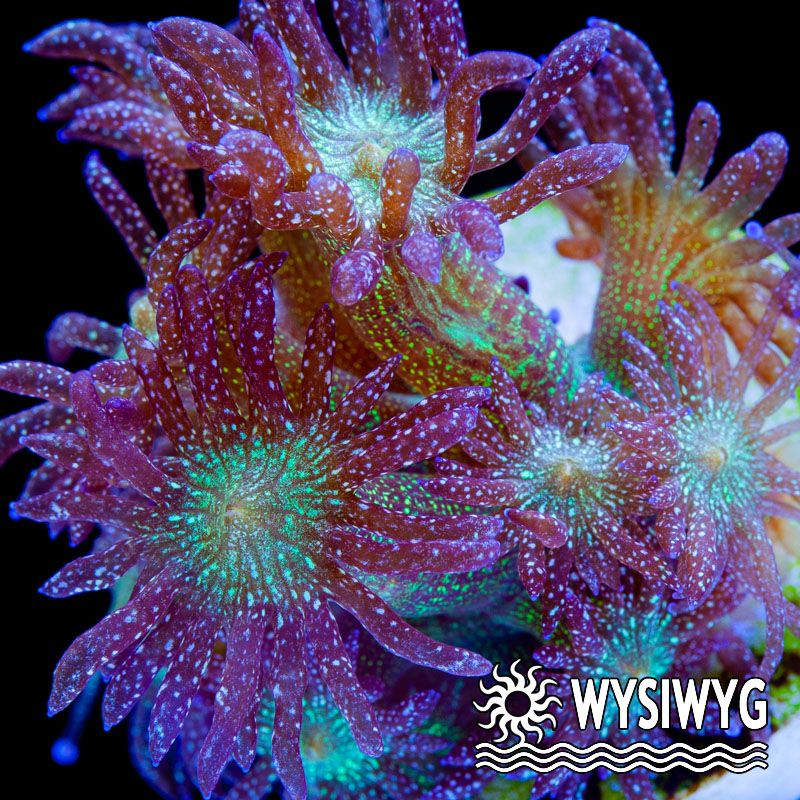 Day 4: I added a small goby from my other tank that, no matter what, kept finding a way into the sump. That was last night and he seems fine still. I figure since i'm using a ton of cycled media it's not the biggest deal. I also added a yellow dwarf fan worm and a bi-color hammer from my other tank since i didn't really have great spots for them. I needed more flow in the tank than the tiny return could provide so I threw in a spare hydor koralia nano and I think it's a good amount of flow for the tank.
You must log in or register to reply here.
Share:
Facebook Twitter Reddit Pinterest Tumblr WhatsApp Email Link