Ok. I've been putting this off for way too long.
A few months ago, I purchased a used RSM250 from a friend. It was up and running, but needed some serious cleaning and a few repairs.
I should have taken more pics during the process.
Here it is on day 1. On the stand and ready for some serious cleaning. 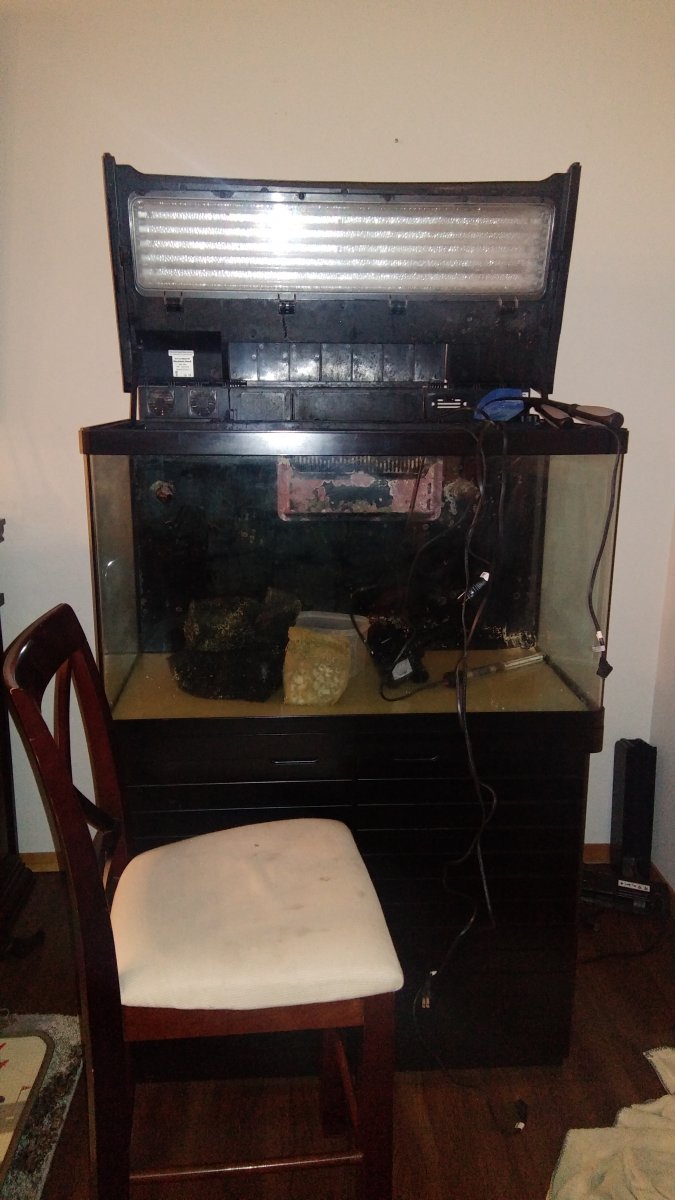 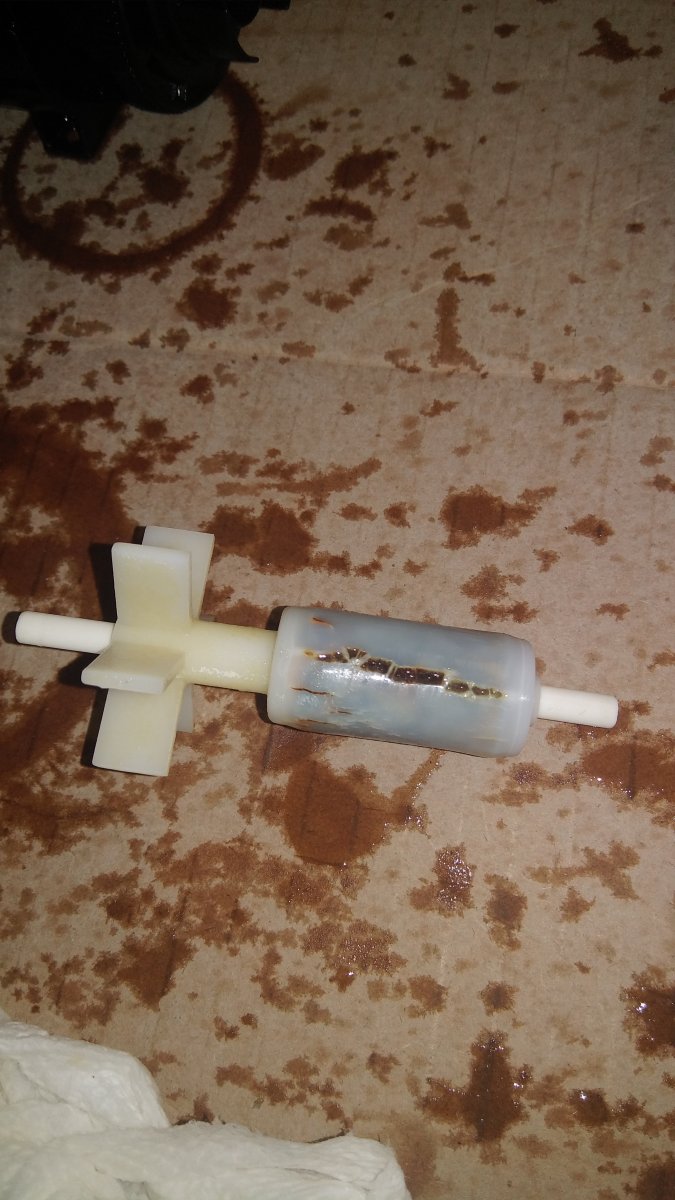 Next was cleaning the tank/sump. This job sucked but I think it turned out pretty nice. Little vinegar and a LOT of elbow grease...
Top down shot of the rear chambers: 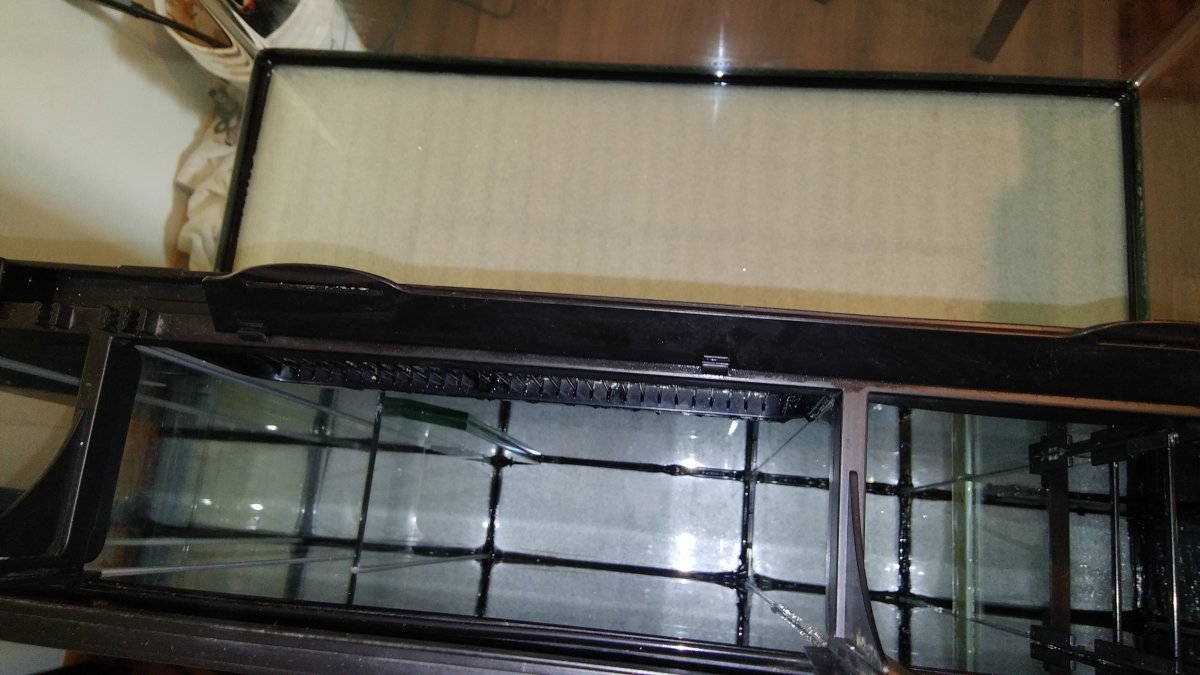 Full tank shot. I intentionally left the coralline on the return chamber with hopes it would come back. No such luck. Ended up scraping it off after it all turned white. 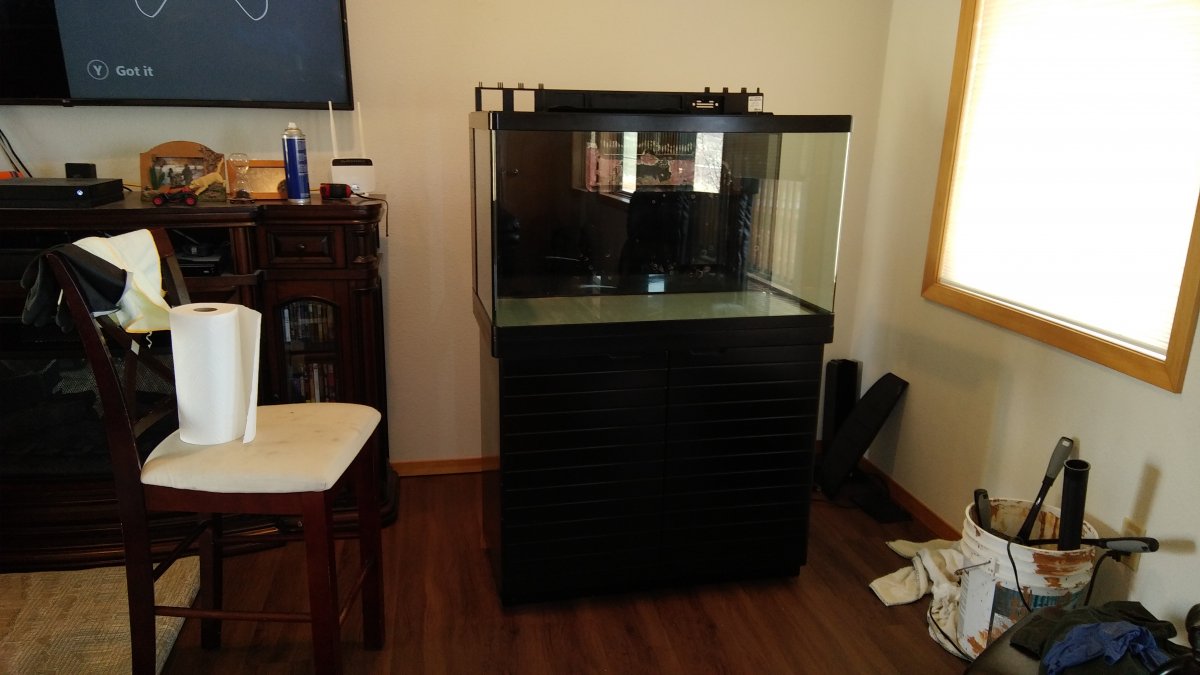 Next, got the aquascape all put together. This is what I came up with. 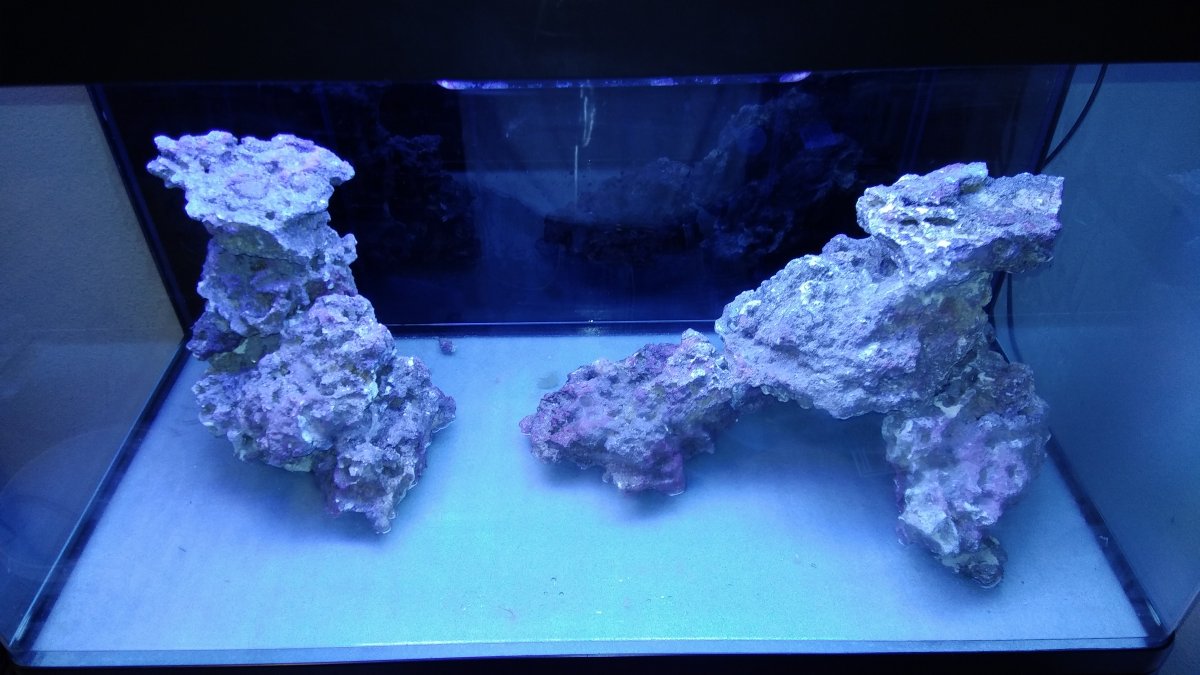 Thoroughly rinsed the sand until no dust clouds rose when it was disturbed. 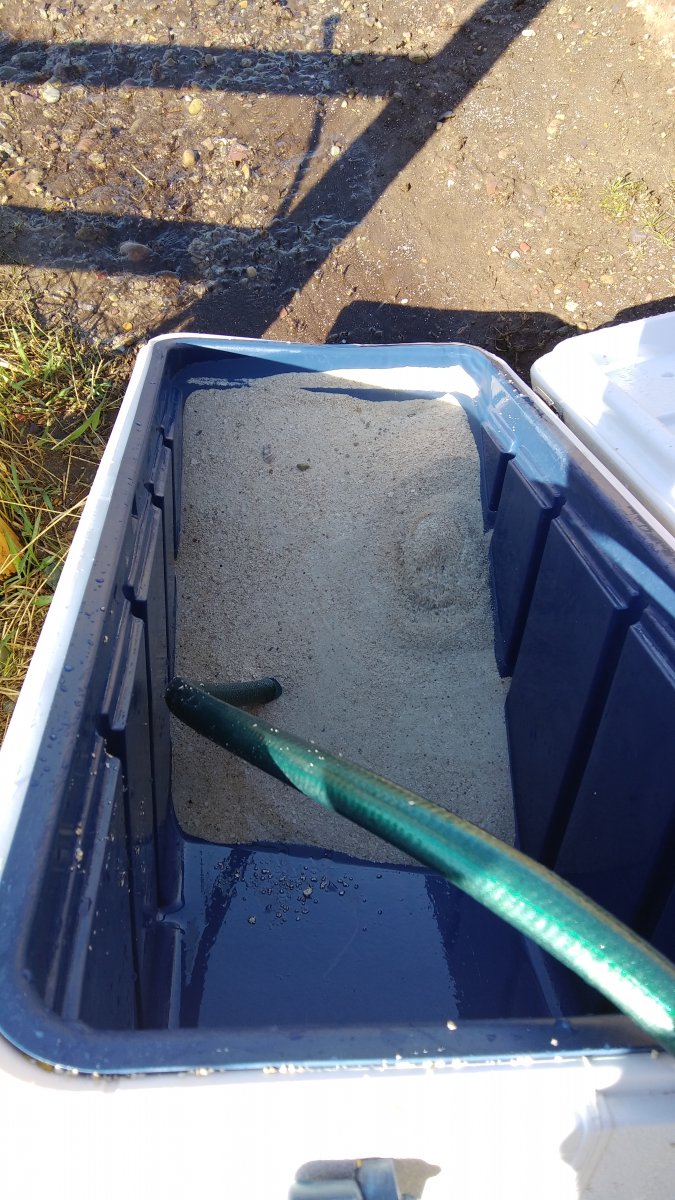 Used 50% existing sand and 50% caribsea live sand. Got it in the tank and started cycling. 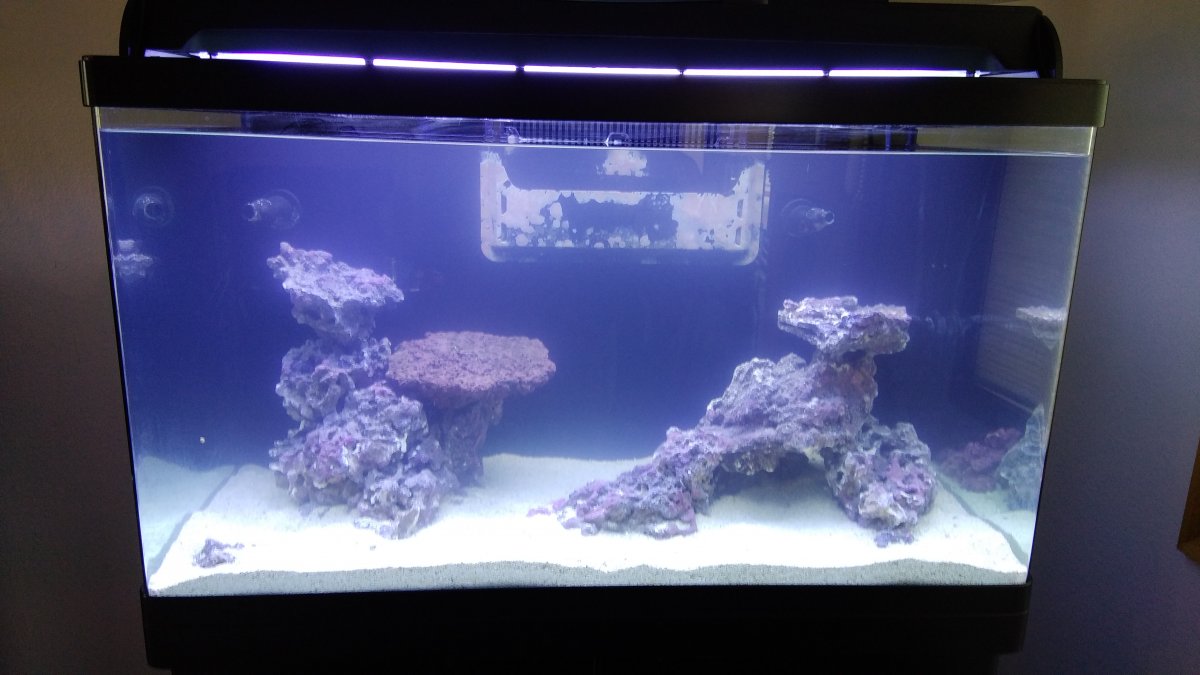 I went with a BRS heater controller and titanium heater rather than the internally controlled heater. This has a few advantages.
1: I can see and control my temperatures very easily.
2: I plugged the heater controller into a surge protector, freeing up the heater plug on the switch panel inside the tank. Now, the heater switch is instead, a flow pump control switch. 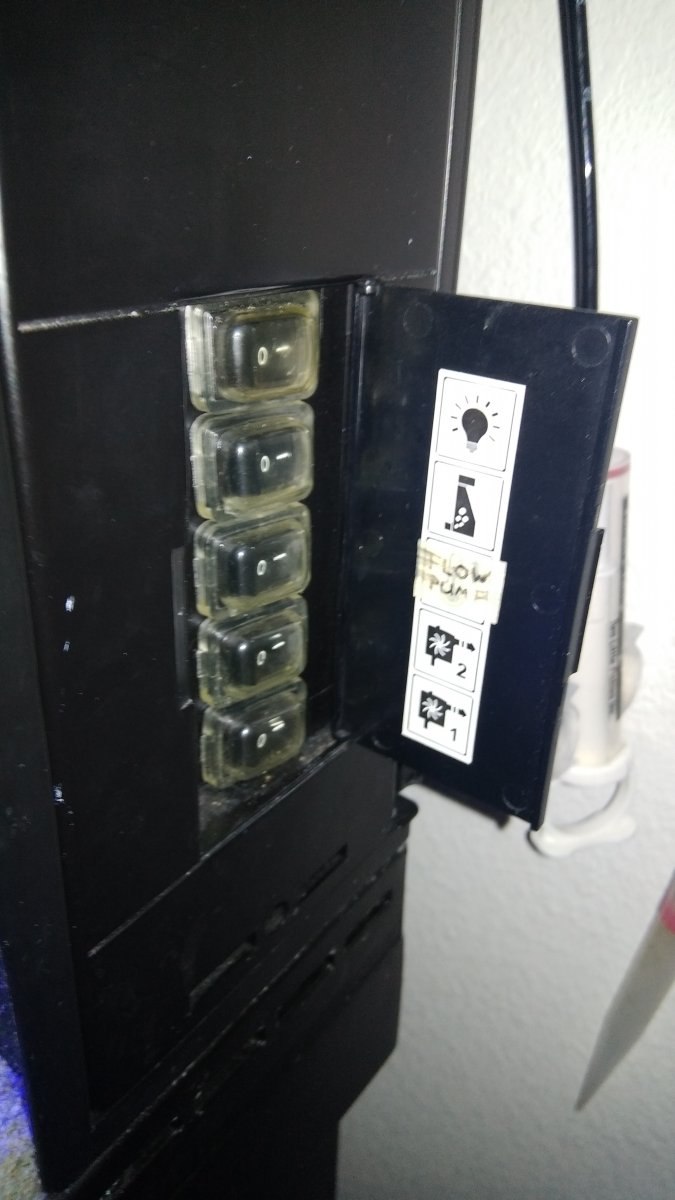 During the cycle, I found another issue. Temp alarm on my heater controller kept going off. The water cooling fans were seized.
The red sea fans are no longer available, so I found some cheap ones on Amazon that were built to the same specs and soldered them in. 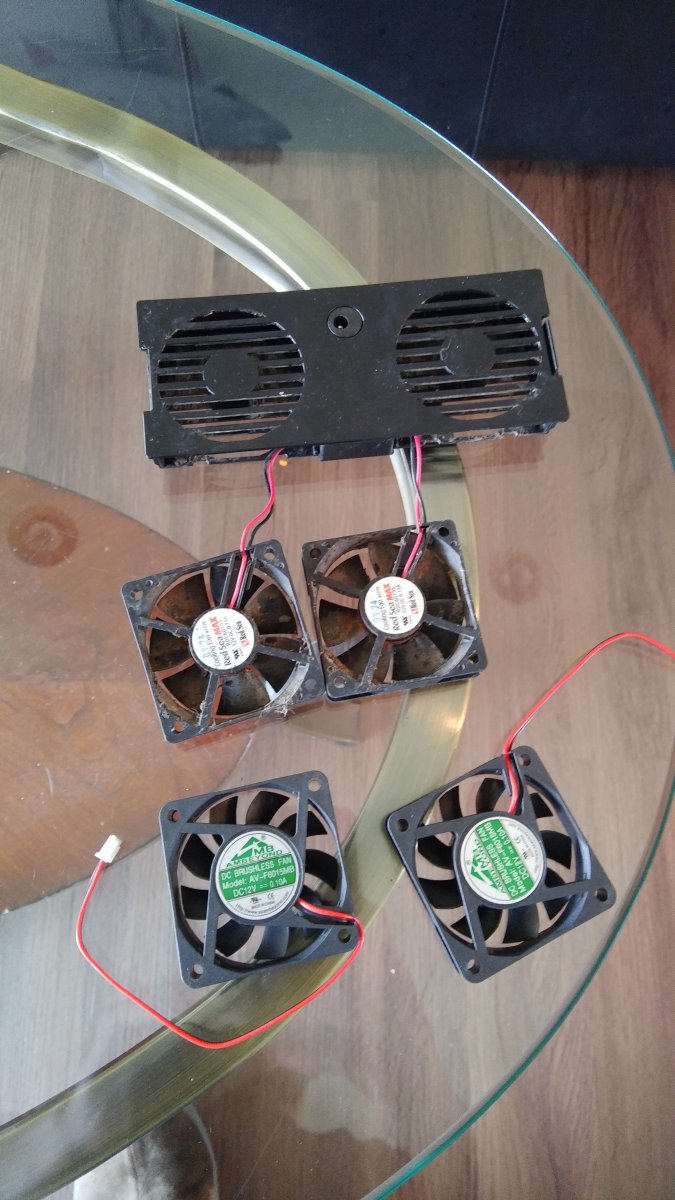 Bad idea... These things are loud! Sounded like a jet trying to take off in my living room. One of them failed in less than a week. So, now what?
Well, I did some digging and found the red sea max 250c fans were close to the same and that fan module is still available. So, I ordered one and modified it to fit into the back of the tank. Didn't solder anything in yet, because I wanted to make sure these fans will work.
Still working and keeping the tank cool a few months later. These fans are 5mm deeper than the original ones, so I will have to cut one of the grates off of the original housing to make them fit. Still haven't got around to that. I will post pics when it is done.
Next on the list: lighting... The t5's in this thing were shot. Coralife bulbs that were practically black. Time for some new ones.
After doing some more research, I decided to go with ATI bulbs. I also thought an actinic LED strip would be a nice addition, so I ordered a Reefbrite actinic strip for it and modified the hood to fit. 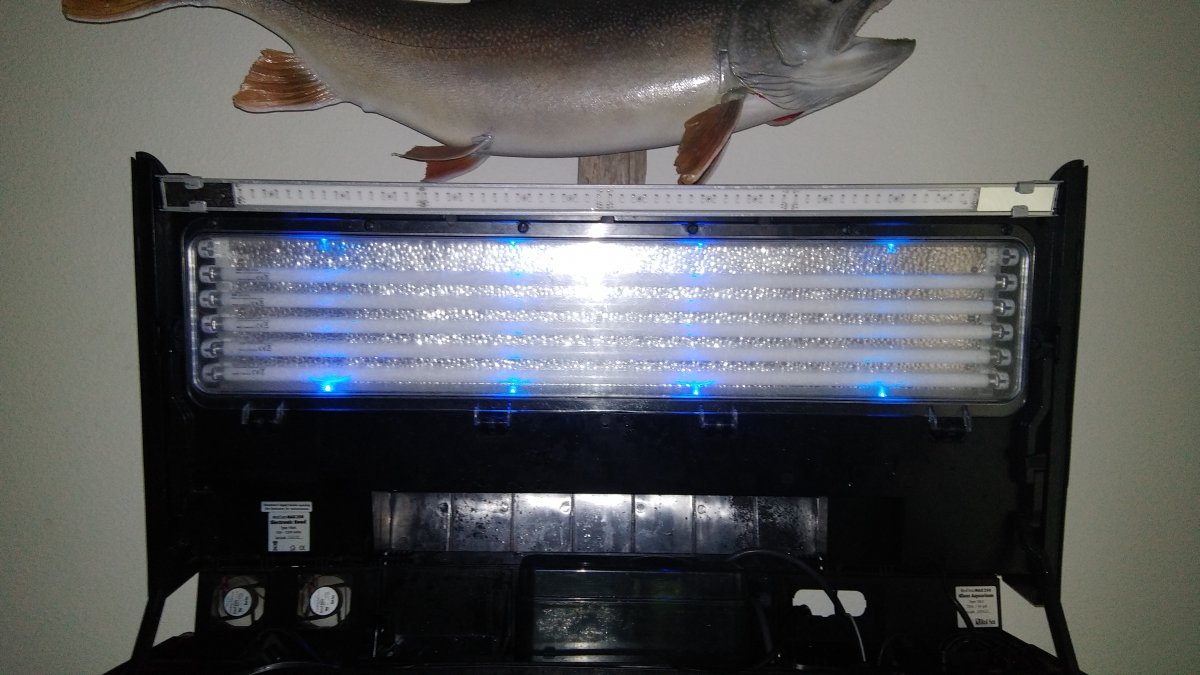 Next issue, was the hood fans. Some of them were getting pretty noisy, so I decided to replace them as well. This required total hood disassembly. Wow, that thing was dirty! But, after cleaning all of the dust out of the hood and replacing the fans, my water temp dropped 2 degrees!
While the hood was apart, I finished the modifications for the actinic strip for a little cleaner install. Turned out great! The 36" reefbrite strip just barely fits between the hinges for the hood and is angled back slightly to allow for better coverage. I purchased a coralife surge protector with a daytime and nighttime sockets. Plugged the actinic strip into the daytime socket and have it running from 8-11. 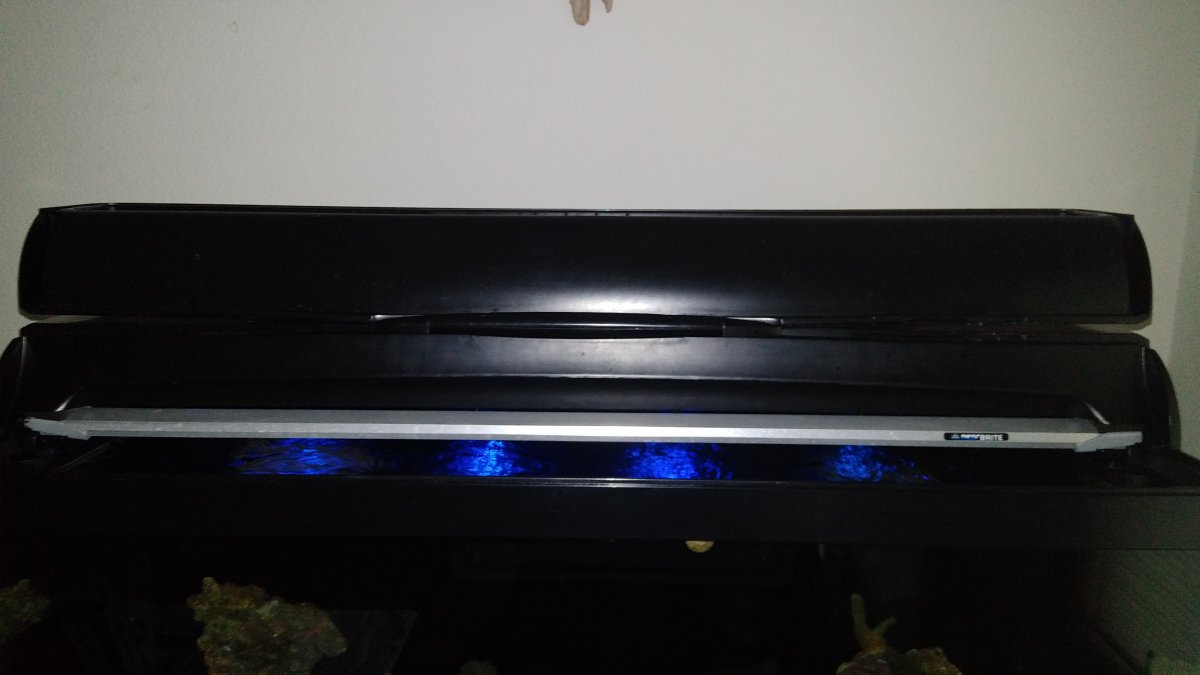 Since then, I have only added a Tunze ATO. 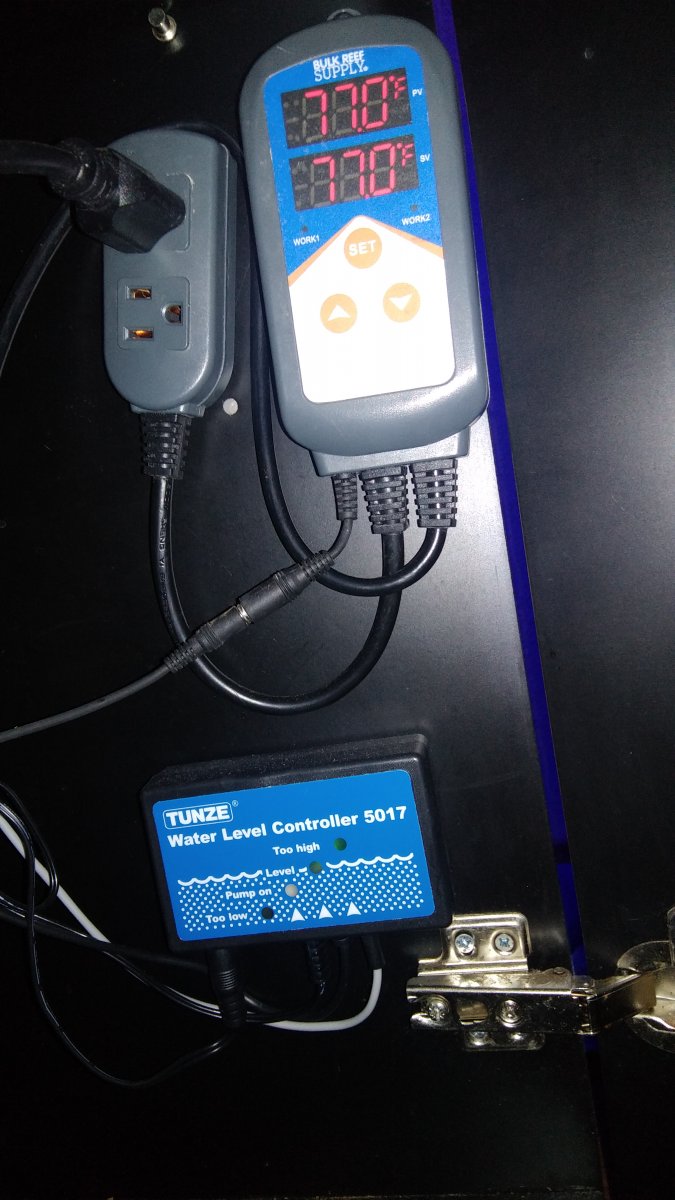 Here is the tank today. 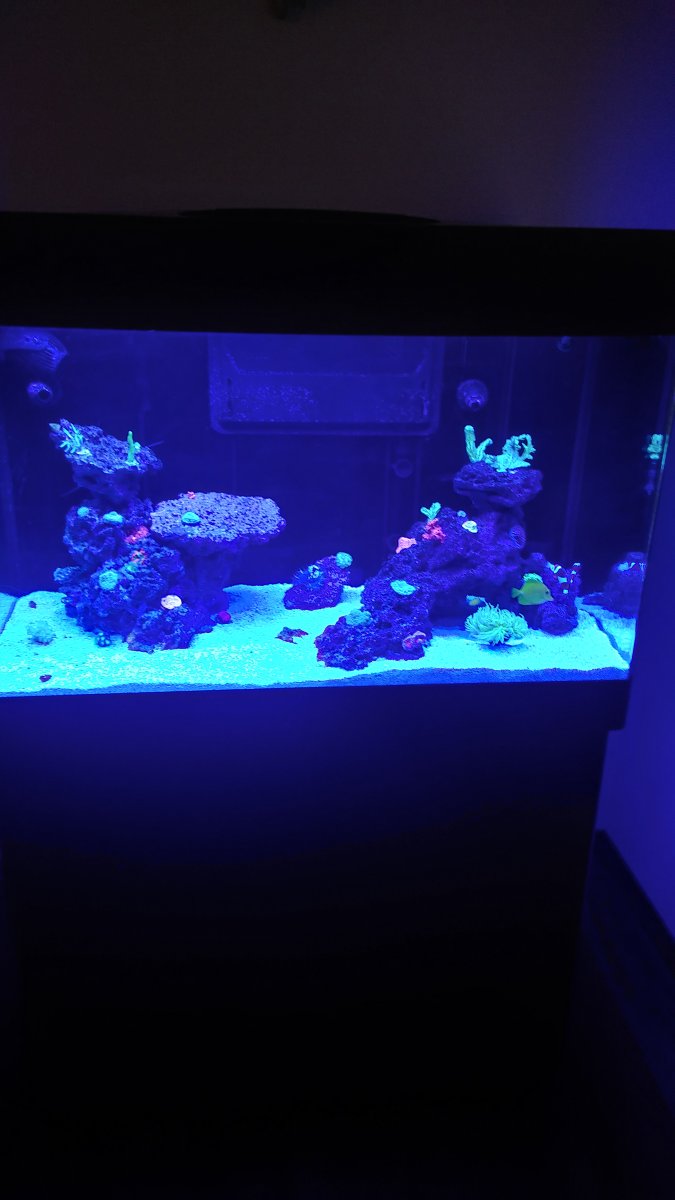 It was a lot of work, but I learned a ton and the tank is up and running great!

I love seeing these builds. I wish RedSea would bring back the Max 130 and 250.
OP

Update: Removed 2 bulbs from the hood and moved some stuff around. Lot of corals getting too much light!

Several new frags in the tank as well. Lots of room to grow! 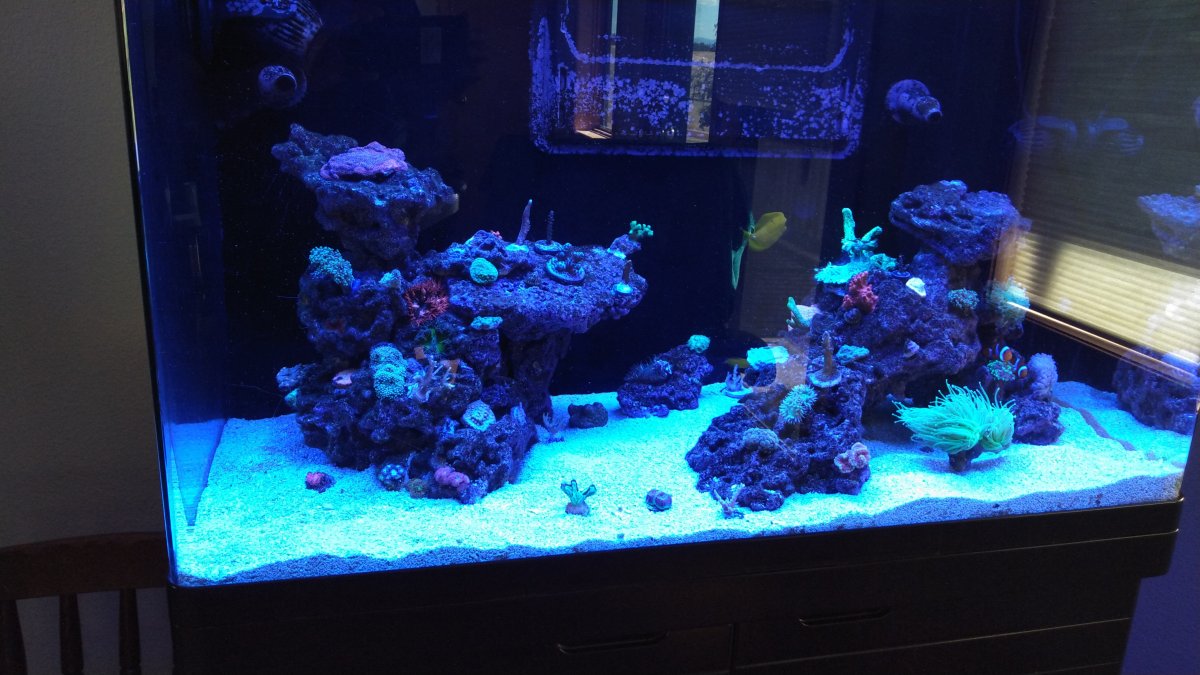 FTS pic update.
Down to 3 bulbs in the hood plus the ReefBrite strip to achieve a reasonable level of PAR.
Blue+
Actinic
Aquablue special 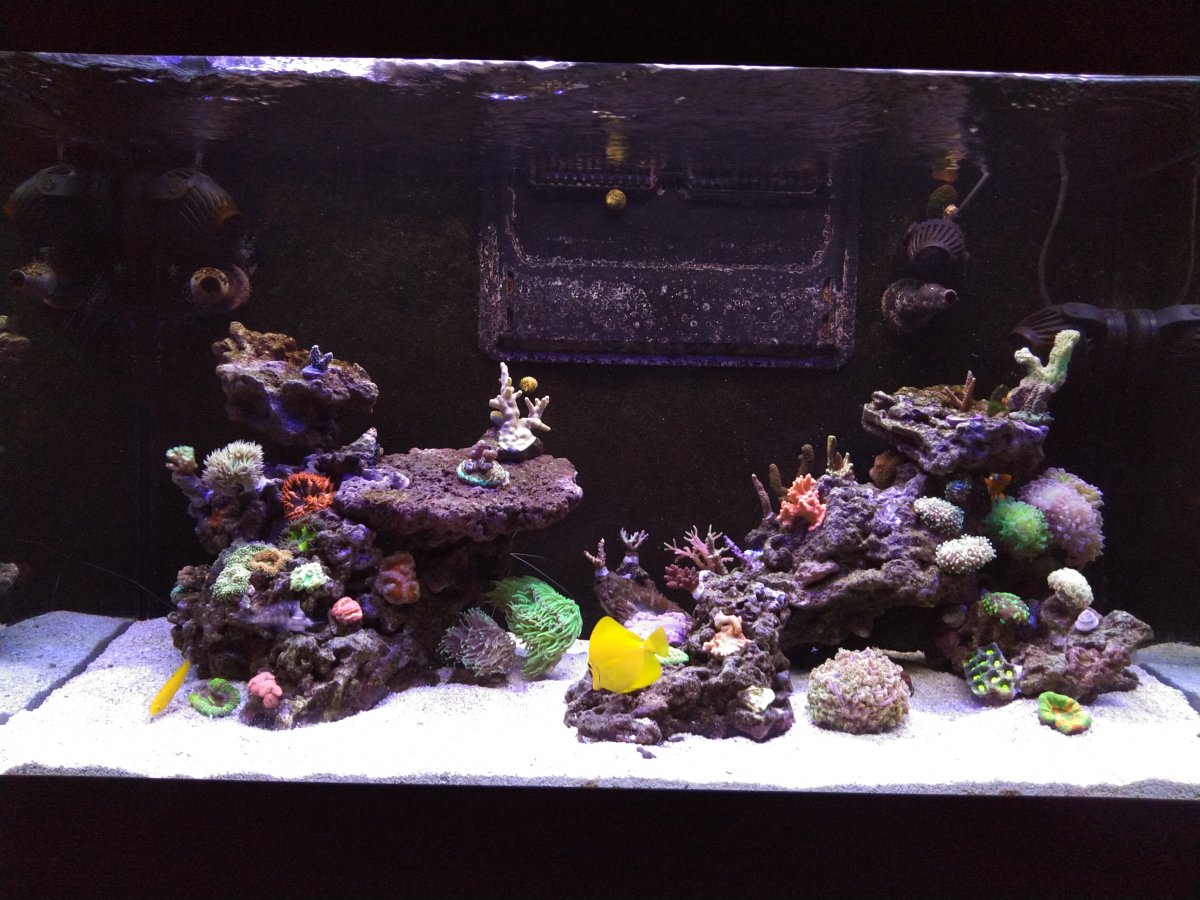