I'm about a year into "reefing" and switched from a 50gal -> 150gal a couple months ago. No quarantine, was comfortable managing ich.

50G fish stock, in roughly the order of introduction:

Things were fine, fish were from 2 sources, primarily a trusted one-man shop owner (40yrs in the business) who has never experienced a tank wipeout and has multiple tanks with his personal fish; I was following his guidance despite research to the contrary because I'm big on nature doing it's thing and not using chemicals. CBB had dots on fins, but recovered.

I lost the kamohara suddenly after the tank move, no signs of distress, just found dead end of the day about a week after move.

2 weeks ago I finally added the "tang gang" which was the whole reason for larger tank. Two yellows and a yellow eye kole.

Spots appeared on the two yellows quickly, but they were eating and doing there thing so I didn't panic.

One of the yellows has since stopped eating, the kole has been covered, and the other yellow seems to be improving, getting fat and generally having a good time.

Now the CBB and Midas have dusty spots. The Midas has been flashing periodically for weeks. I was in denial that it was Velvet instead of Ich, but now visually it has to be Velvet. Scratching and head twitching also.

Purchase new 55g (wish the $/gal sale hadn't just ended!) and move everyone over, treat with copper. I have spare ATO, heaters, wavemakers, and Hanna checker, but need to figure out filtration. Seeded matrix from the DT sump will have to do. I will likely have to teardown the DT in order to get them out so the associated stress has made me hesistant to do this, but now I've convinced myself it's the only way to avoid losing everyone.

Biggest concern is the Mandarin. I have a fallow 10g coral qt that has pods, so I'm considering doing a H2O2 dip and putting him in there. I don't know how to make sure he has available food otherwise. It is captive bred, and does eat some frozen, but not enough that I'm comfortable relying on it.

Thoughts? It's been 2 weeks now with an apparent outbreak, so I'm still a bit puzzled. I would post pictures but they wouldn't show anything that any google search for velvet wouldn't provide.

Amyloodinium (velvet) usually kills pretty quickly, and rapid breathing is as hallmark symptom. If you can get a respiration rate on one of the affected tangs (by counting the gill movements it makes in 15 seconds and multiply by 4) I can give you some idea asto how elevated its respiration rate is.

Sometimes, when Cryptocaryon has been cooking for awhile, the lesions look less like little distinct grains of salt, and look more diffuse and cloudy.

In any event, your plan for the mandarin seems the best under the circumstances. What copper product are you going to use? Do you have a Hanna checker to test?

Other than the one tang not eating and a little strange behavior from the blenny, all seem to be acting somewhat normal. I am seeing the cloudy spots on the tails of the wrasses now... makes me think the parasite is multiplying rapidly.

I have the new 55 filled, but waiting for temp to come up and salinity to stabilize. I had to make the water...


Everyone is still alive. I’m really concerned about the stress of capturing all of them. It didn’t go easily in the 50. I can’t imagine how this will go.

Quite worried about starving mandarin in QT too.
OP

I have Copper Power, as I read it may be easier on wrasses than ionic versions. Obviously I don’t want to be putting wrasses through, but what choice? TTM didn’t seem plausible for 12 fish

120 is elevated, but lower than I’d expect from velvet (150+). I still think you should proceed as you’ve planned. Don’t take too long getting the copper to full dose, maybe 24 hours.
Jay

Thanks. I really don’t know how I am going them out of the DT.

This is going to be ugly

I feel for you. I am in the same boat but there is no way to remove the fish from my 450G and 750G so now its just death by attrition until they are all gone and I can go fallow.
OP

I got the 3 tangs out and the Midas. In the dark it wasn’t awful, took an hour.

The rest will have to wait until tomorrow evening when I can take the rock out.

We shall see how they are in the morning. Copper is at 1.57

I don’t think the skinny non-eating yellow tang will make it. I think the freshwater dip gave him a heart attack.
OP

Trouble sleeping. Checked on the infirmary; one yellow deceased.

Not a surprise, as he hadn’t eaten in a week, but discouraging nonetheless.

Remaining yellow & kole were responsive. Couldn’t see Midas which is good I guess. He found a hidey hole of some sort hopefully.

So after another 2+ hr struggle, everyone is out except the mandarin. I’ll do him tomorrow with a H2O2 dip and send him into the frag tank. Still quite concerned about him eating but guess I’ll figure that out when it becomes a problem. He is properly fat, nearly round, so I guess I have a little wiggle room.

Ammonia build up is my next issue, assuming the copper and stress don’t kill any of them.

I moved about 1L of matrix and a 8x8 piece of filter media over. That and dosing MB7 I hope will keep things manageable. Water changes and testing must be the only answer. 55 gallons... 10 fish... crash cycle. Eek.

Beau_B said:
So after another 2+ hr struggle, everyone is out except the mandarin. I’ll do him tomorrow with a H2O2 dip and send him into the frag tank. Still quite concerned about him eating but guess I’ll figure that out when it becomes a problem. He is properly fat, nearly round, so I guess I have a little wiggle room.

Ammonia build up is my next issue, assuming the copper and stress don’t kill any of them.

I moved about 1L of matrix and a 8x8 piece of filter media over. That and dosing MB7 I hope will keep things manageable. Water changes and testing must be the only answer. 55 gallons... 10 fish... crash cycle. Eek.
Click to expand...

This is terrible. I’m going to lose the Kole tang too. He is about 36hrs (@1.61, just checked) and was looking ok yesterday but now seems to be losing slime coat and laying on his side with very distressed breathing.

I gave another h2o dip but I don’t think that helped at all. I’m going to now lose the new fish anyway... disrupt my “happy” fish and potentially lose some of them too. This doesn’t feel like the right move. Maybe I’m not cut out for this. 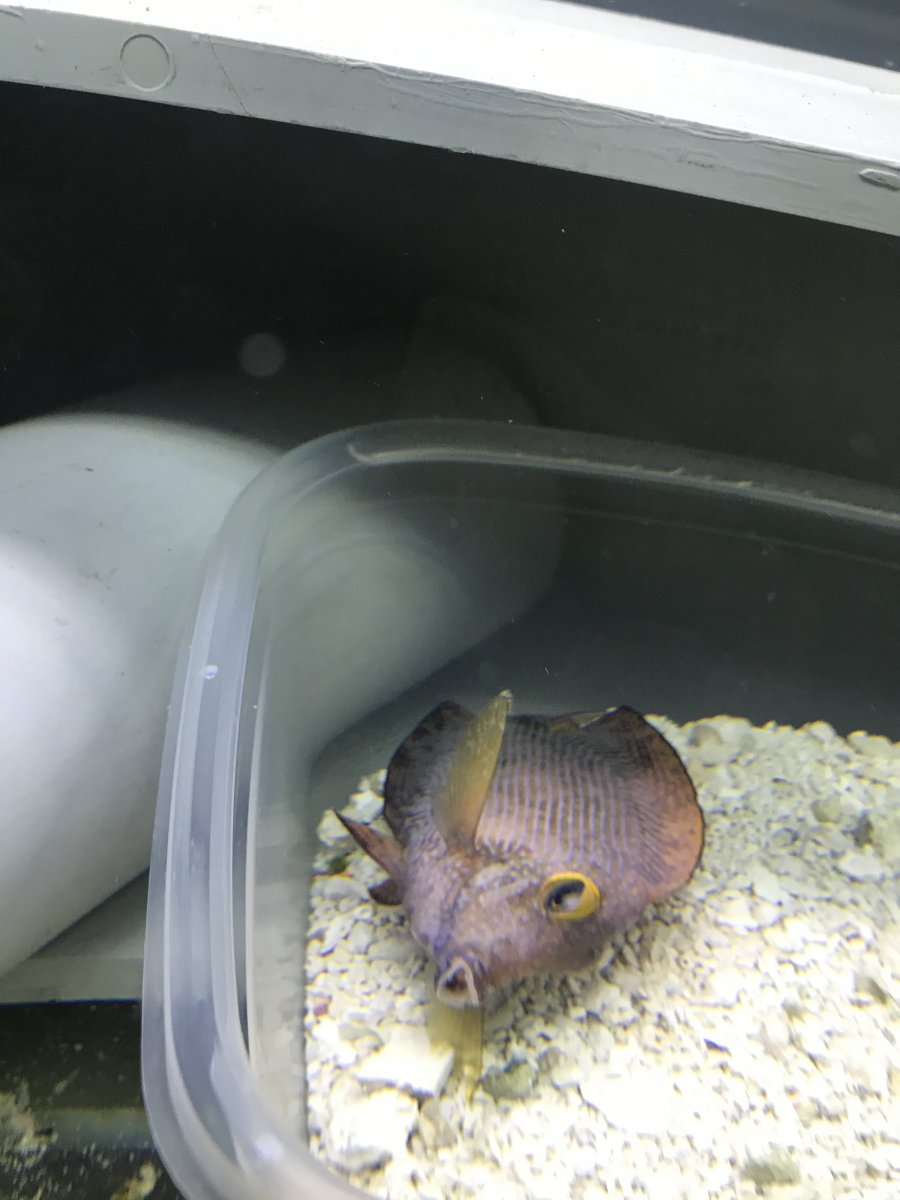 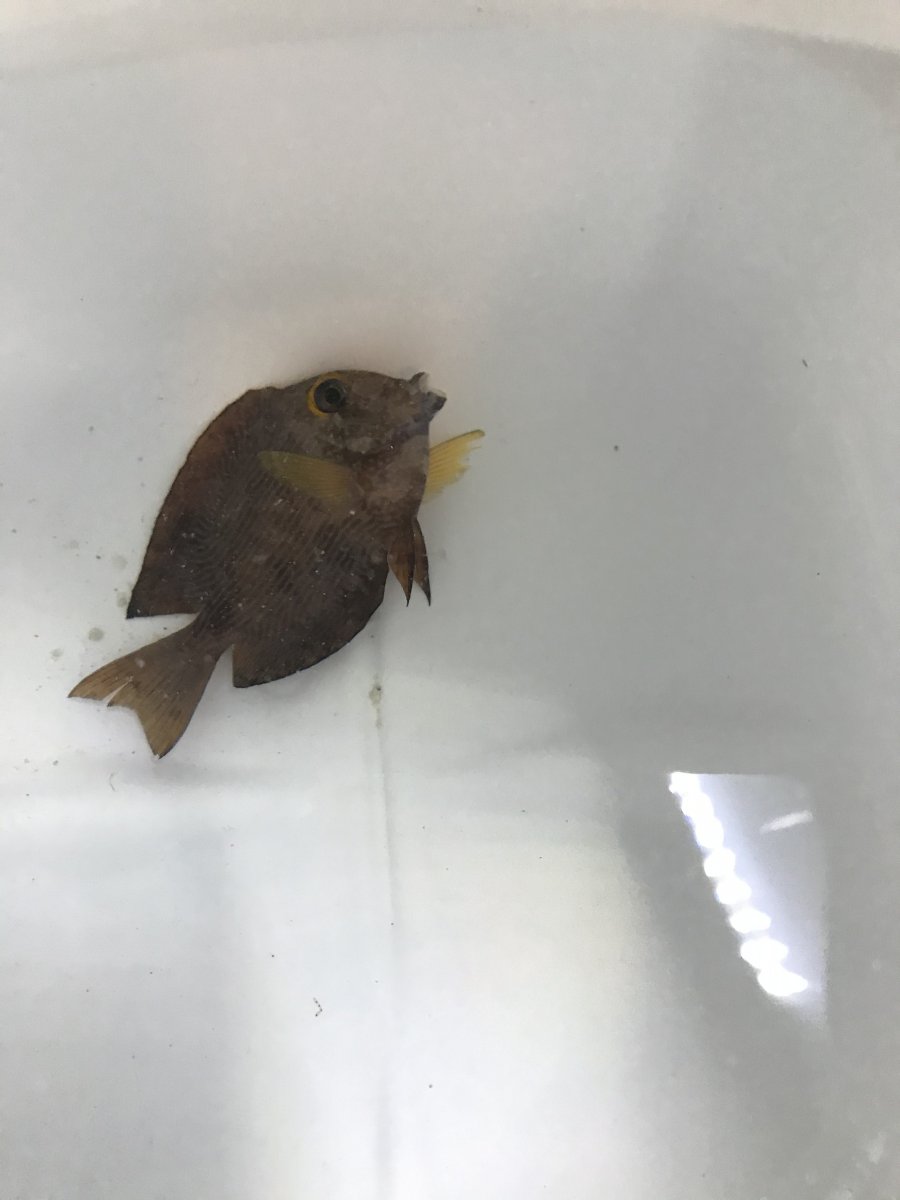 I guess this must be a bacterial infection. I don’t have anything on hand I can put in and I have to go to work momentarily.

With the tangs dying I’m seriously considering just putting everyone back in and letting nature do it’s thing. I’m having more signs of death in QT than ever.

I really think this is a protozoan infection, not bacterial - it came on fast and rapid breathing matches. Sorry to see.
Jay

Beau_B said:
I guess this must be a bacterial infection. I don’t have anything on hand I can put in and I have to go to work momentarily.

With the tangs dying I’m seriously considering just putting everyone back in and letting nature do it’s thing. I’m having more signs of death in QT than ever.
Click to expand...

I know this won’t help you now, but maybe it will in the future. People recommend setting up “hospital tanks” when problems arise, and your situation is exactly why that doesn’t work. If you have room for a 55 gallon qt (I keep my quarantine tanks in my unfinished basement), it’s better to keep it up and running for preventative quarantine and for situations like this. I always start a new qt with a bottle of Biospira before copper needs to be added so that it can establish an effective bio filter. I may have missed it, but it seems that you don’t have a filter, which won’t work long term. There are reasonably priced HOB filters that work well for quarantine tanks. I use a Seachem Tidal for my 50 gallon qt that’s a bit oversized. It works well.

I hope that this doesn’t come off as preachy. You’re doing the right thing by trying to save these fish. I know it can be discouraging - I didn’t have success with quarantine until I started using the method I described above.
OP

It’s filtered, hob with a seeded sponge. Also two power heads, temp controller, ato... operational it should be fine. I moved 1L of sea chem matix into the tank that has been in the DT for 6mo. I don’t think bioload is this issue.

I’m quite upset and fully discouraged. It’s one thing to lose the new fish but if I get home to the rest of them sicker now I’m QT than they ever were in DT for the past year I think I’ll lose it and throw in the towel. For an expensive hobby that’s supposed to be enjoyable it has become nothing but a source of stress and insomnia.
OP

I guess the real issue is I’m now thinking it was just ICK not velvet and the stress of the move and the immunosuppressive nature of copper is threatening all the fish that were otherwise surviving, even thriving. I kept reading and convinced myself I had to act when it may have worked itself out with some lesser degree of death. I’m now faced with losing more and perhaps all.

I’m going to go euthanize the Kole and leave for work. He’s suffering and I can’t leave for 10hrs with what is sure to soon be a carcass in the tank.

Beau_B said:
I guess this must be a bacterial infection. I don’t have anything on hand I can put in and I have to go to work momentarily.

With the tangs dying I’m seriously considering just putting everyone back in and letting nature do it’s thing. I’m having more signs of death in QT than ever.
Click to expand...

IMHO, keep treating your fish and let your DT run fallow the 76 days.

I just finished 14 days of copper for 24 fish with velvet/ich. Lost 2 to bacterial issues.
Couple thoughts that worked for me: consider adding fine layer of sand or sand box - calms wrasses and jaws, extra air stones to keep the water full of oxygen for the tangs, buy extra Hanna checker copper reagents so you can do water changes (match copper level of new water to levels in Qt) - while extra work, gave me peace of mind, and take extra time observing fish at feeding time. If someone is showing signs of bacterial issues or not handling the copper, pull it out and treat. (I pulled an emp to treat swollen eyelid, a coris with eroded fins and all the pearly jawfish for various reasons.).

Here’s a good read for you to consider.
https://www.reef2reef.com/threads/hybrid-ttm-to-treat-all-parasites.640247/
OP

Thanks. I’ve read that. I’ve probably read more about QT and fish keeping in general than I did in all of my schooling. I am a little manic when it comes to researching... to a fault.