Awesome tank and kudos to you! You’ve kept 20 Purple Queen Anthias for 6-7 years already without a single loss? That’s amazing. How old are your other Anthias?

I wonder if anyone keeps P. Fasciatus?

Zionas said:
I wonder if anyone keeps P. Fasciatus?
Click to expand...

I am in the UK and I'm always on the lookout for different species or anthias, the members of the forum I'm on in the UK know and tell me if they have seen any. I have contacts who work at importers in the UK and they haven't seen them.

I have never seen or heard of these anthias ever being imported into the UK in the last 6- 7 years. Whats the betting someone in the UK will reply saying XXXXX LFS had 20 of them last week

Oh really? They’re so rare. I heard they’re a deepwater species but I think they should be more frequently imported.

Zionas said:
Oh really? They’re so rare. I heard they’re a deepwater species but I think they should be more frequently imported.
Click to expand...

I have no idea if they are rare, they are just not imported into the UK. This is my gripe, there are lots of potentially great aquarium fish out there that are never imported. Just look at ,Fusilier damsels stunning, peaceful fish not scarce in the wild but rarely imported.

Unfortunately, in the west, fish are commodities with a limited shelf life (sorry to be brutal) and a LFS knows if they get fish that don't sell it is a monetary loss for them. LFS owners and importers know their market and they will stick to the 'tried and trusted' sellers. After all how many LFS have a tank in the top corner with those fish that never sell. I don't know how the market works in China where you are.

We, aquarists, also tend to be conservative when buying, we for the most part look for the 'standards' we understand and know how to keep. For the most part we don't like to experiment with a fish, mainly because it's our money and tank harmony we are playing with. You only have to look at the fish wish lists posted on R2R I bet you never get an unusual fish listed.

The hobby in China is probably younger than the lifespan of a common Clownfish. It only started in the 2000s and even now I think it’s just starting to take off. Much like the West, profit is king but the unfortunate thing is (and I see this elsewhere in Asia) there are plenty of ignorant people who insist that something is okay just because they have succeeded (or think they have long term success) with it. I see way undersized tanks with every single Tang, Angel and Butterfly they can cram in. As of yesterday I had a guy from Hong Kong boast to me that he kept up to 25 fish in a 3 foot tank, and that quite a few of them were 5-6 inches. I didn’t bother with him afterwards.

People where I am generally lack a commitment and interest in the long-term welfare of their fish and corals. More so fish. Since costs are lower than in most developed countries they just don’t care even when I tell them they are living creatures that live for years, decades. They just have that “live for today and don’t worry about tomorrow, and if something drops dead just replace” kind of mentality. I cannot imagine doing that to what I’ll end up owning. Now if you asked them whether they’d treat a cat, dog, or rabbit the same way, I guess it varies.

I know a guy who’s really into Tangs. At one point he crammed 4 Tangs into a 55-gallon tank, and three of them made me shake my head in disbelief. He had a Yellow, Powder Brown (Japonicus), Clown Tang and Blue Hippo all in that tank. And much to his surprise, he had a white spot outbreak that killed everything. How does our hero respond to this? “Oh well, stuff happens” and proceeds to get another Yellow and a Mimic Lemonpeel Tang and a juvenile Emperor Angel. The Emperor Angel and Lemonpeel again “died for no reason” (I don’t know how he actually takes care of his tank), but he still thinks it’s okay to just keep buying because “it’s cheap anyway.” I am too lazy to upset him.

So yes, in my part of the world people and many retailers / wholesalers are equally shortsighted and outright dumb. The most common imports seem to be Tangs and large Angels, the latter of which most people don’t have the tanks for and the former of which only a few of the smaller species can fit into your average home aquarium. Sometimes the wrong species are imported because I guess well, people ask for them. Cleaner Wrasses (not the captive bred ones), corallivore butterflies, and the Golden Trevally (Pilotfish) which usually come as juveniles but nobody seems to know or care that they grow into 2 foot monsters. Oh well, they’re a schooling fish and schooling fish look cool so people don’t do their research.

jdiefenbaugh said:
Have kept P. dispar, P. tuka, P. pleurotaenia, P. hutchii, P. squamipinnis, P. bimaculatus, P. bartelletorum, P. hypselosoma, P. pictilis, and S. latus. They all form hierarchy's, some change sex extremely fast, some are tolerant and some aren't. I generally recommend just sticking with plain old lyre tails, as they still look nice, can be kept in groups in medium/large sized aquariums and adapt to most foods. A lot of the odd ball anthias require live naups multiple times a day. People talk about purple queens being difficult to keep, and I think they are one of the easiest. I introduced a group of 20 or so 6 or 7 years ago, and they are still thriving, but you have to have bbs for them to feed on. 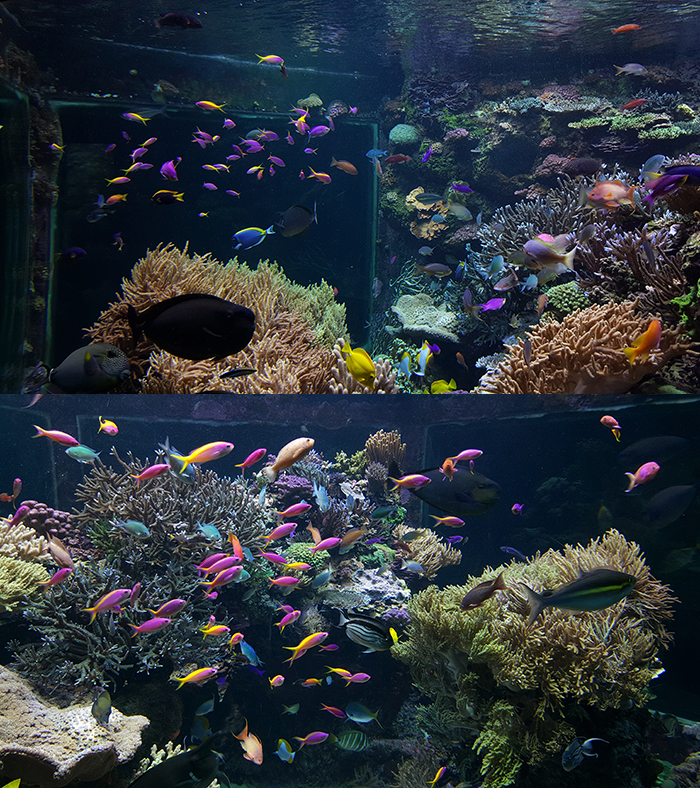 What an amazing tank.
Seen a ton…..nothing like that though.
Impressive!

Yes things happen but where I am people claim 2 years as a success for most fish. They call a Tang they’ve had for two years an “old fish.” If I had that same fish they’ll earn the honor of being “old” once I’ve had them for 10+ years. If someone asked me how long I can keep a fish for, if it’s one with a long lifespan I’ll ask them to repeat that same question in a decade or two.

I also find many deepwater Anthias that haven’t made it into the trade to be very attractive. Perhaps one day we’ll see them.

To give you guys some examples of top notch husbandry in my part of the world (if your eyes hurt or if you get a heart attack be sure to have health insurance):

Questions about the Square Spot Anthias