According to the experiences of my LFS owner in China, he has never seen a Genicanthus female change to a male, only the other way around. From your experience, is it common for 2 Genicanthus females where 1 eventually changes to a male, or are they most likely to remain female? If not, will 2 females usually get along if they’re the same species? What about if they’re 2 different species?

I would really love to see a pair of Spotbreasts or Watanabei where one changes to a male.

It's actually the other way around, they all start out as female and the dominant turns male. They xan live harem style with one male and multiple females. There's a good write here but I dont know how to copy and paste from my phone. But you can search the name of the thread. "Genicanthus Angels: The True Reef-Safe Angels"
OP

Ahhh ok I have found the thread. He says you can mix different species of females (maybe the same as well?) but I would love more people to chime in.

BTW sorry if you’ve already gone over this in a previous thread but how big do Mimic Tangs get? Do they get any bigger than the smaller Zebrasomas?
OP

I actually get what your lfs is saying. Male genicanthus can definitely revert back to females and it's happened enough times in tanks for it to be a "thing". Naturally this would only happen if the male was harassed by another male but (and might not be a fully mature male yet anyway) it can occur without another males presence.
I have heard of females turning into males but don't think that is particularly common either. There are also instances where the female begins a transition and stays at a half way house with characteristics of both sexes.

Yes I see. If that’s the case what are the chances of 2 females getting along? Do they have to be the same species?

I had my Female Watanabei turn male after about 1 year together with a smaller female in the past. I don't have them right now. Many reefer stated that their female "never' turn male. What they mean by 'never' is varible, however, this Genus, sex change is less reliable. Many people report males lost color and turn female if they are by themselves.
OP

What happened to your old pair, if you don’t mind.

I keep Watanabei angels only because they are beautiful and are the smallest species of the Genicanthus. The first pair I sold when I took down the tank. The second pair, got kill in the aftermath of hurricane Harvey.
I think, like angels of other genus, Genicanthus male will more likely fight, even if they are not in the same species if they are close enough in genetic and behavior. I don't have any experience on this but other reefers have reported that they normal have only one Male Genicanthus in a tank, the others are females. IME, females are tolerance to each other, but I don't keep two species of Genicanthus in my tank.
Then there is tank size as a huge varible. I have larger tanks, 420 gal and 320 gal DT so what I find in my tank does not necessary translate to a smaller tank, especially in fish that are requiring larger tanks thank most people provide for them.
OP

Ahhh ok thanks for clarifying.

I have kept a number of Genicanthus species over the years (well the one's you don't need a mortgage for), I think they are a very underrated genus, but as I usually buy a pair or trio I have never seen one transform female to male. As has been said above it isn't reliable

However, I did have a trio of G. semifasciatus where the male changed to more a female coloration. Besides the male and 2 females there were no other Genicanthus angels in the tank and neither of the females harassed the male.

The male looked like this when I got him 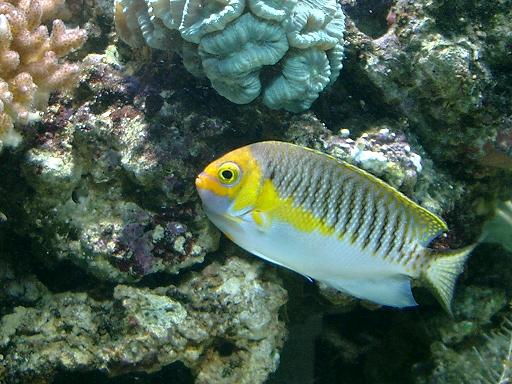 He started to revert after about 3 months The white stripe behind the gill is developing. 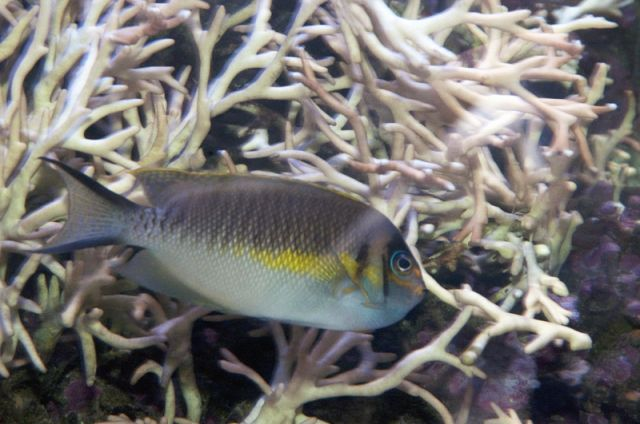 This was after about 5-6 months the white stripe is getting much clearer, the yellow edge to the dorsal is there and the body shape is changing especially around the head area. 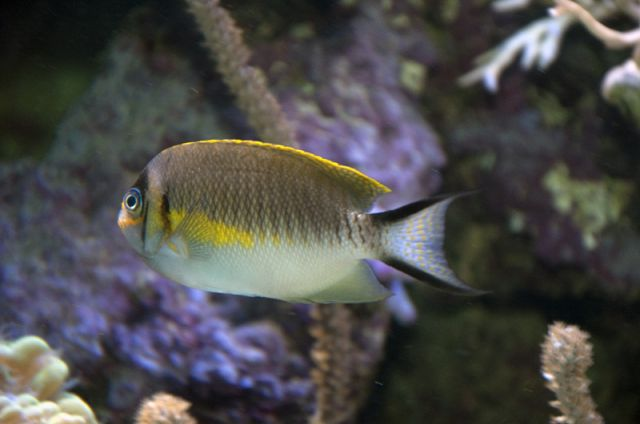 That’s great to know, and yes they should be a lot more popular.

Zionas said:
Yes I see. If that’s the case what are the chances of 2 females getting along? Do they have to be the same species?
Click to expand...

I've seen people keep one female from at least 3 different species together and they seemingly had no problem, the tank was pretty small as well. I've also seen people keep trios of females from the same species and they had been very territorial. A couple of times this has caused an apparent death of one of the females but my personal experience with a trio of bellus was that although initially a little territorial they were fine (8 foot tank). I didn't try a male because I think the females are far nicer than them but would probably take a punt on a pair of wantanabei.
The key, like any other planktavore is to provide as much space as possible so their naturally aggression is reduced by space. I think this is more important if you aren't really cramming them in like anthias as you don't get a dilution of aggression through numbers.
OP

I see. I think I’ll give it a try and hope for the best. Out of a trio, with one of the females dead did one of the remaining females eventually change to a male? 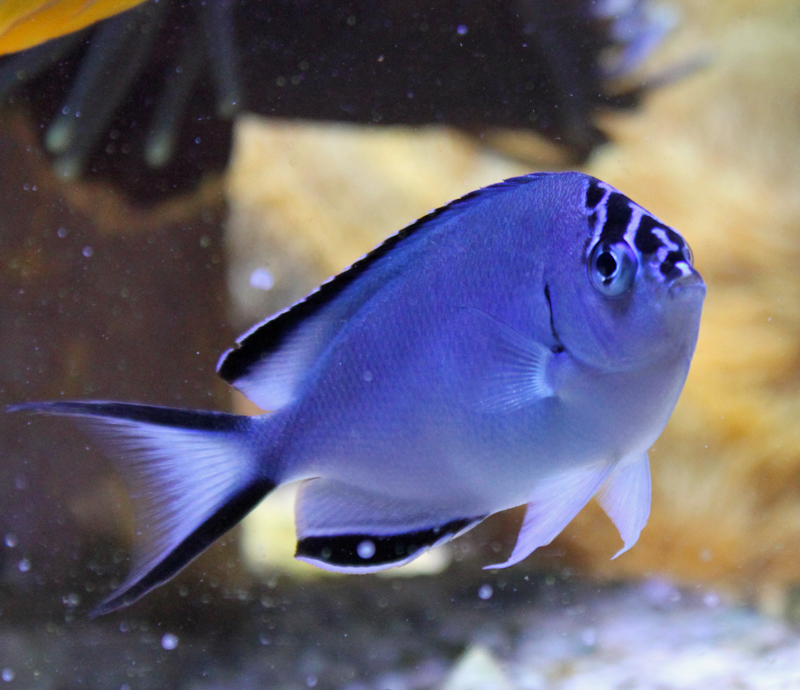 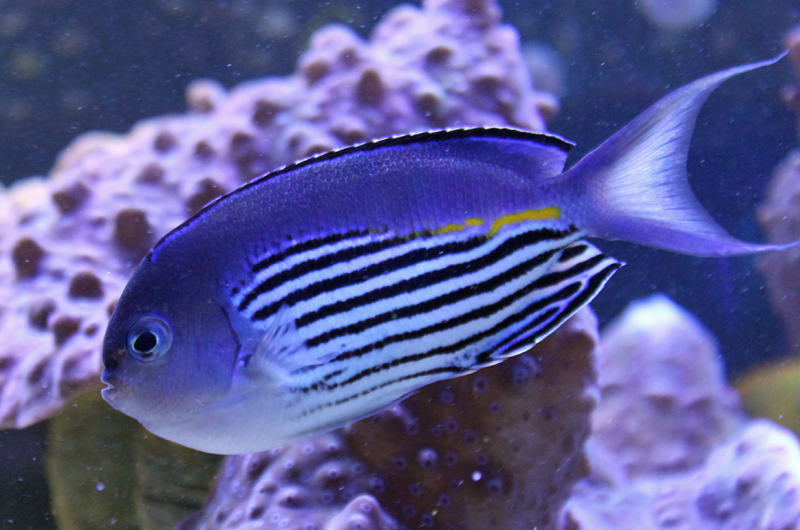 Do you think one will likely change to male if they are the same size as females when purchased?

Zionas said:
I see. I think I’ll give it a try and hope for the best. Out of a trio, with one of the females dead did one of the remaining females eventually change to a male?
Click to expand...

I don't know as the females that died were from someone else's trios that I read about. I remember one lost both the others to disease shortly after but the other I don't know.

With my trio there was absolutely no sign of sex change or even dominance really. I'm a bellus fan but ime they grow painfully slow and after 4-5 years were probably 4", so perhaps still to young to transition. I didn't mind however as I'm not really a fan of the males (other genicanthus males on the othe hand are stunning).

Zionas said:
Do you think one will likely change to male if they are the same size as females when purchased?
Click to expand...

I don't think they are that worried about becoming males to be honest going by the lack of sex changes in the hobby. I don't know whether they are slow to mature and pass before they get there, whether they aren't kept in pairs trios or groups enough for sex change to be common, or there is a lack of stimulus for change.
OP

Ahhh okay thanks for the info. What disease did they perish from?
OP

Do you think on average a 4” fish would already be 4-5 years old? How long can they live for?

What would be a good tank size for 2 Genicanthus?
2

A
Female Flame Wrasse to Male?

Adding another male mandarin that’s not the same kind

Will my female and male blue throat triggers pIr up?