Your GO TO medicines to treat sick fish that you keep on hand!

Rating - 100%
1   0   1
We're continuing our topics on sick fish this week and one thing that sick fish need is fish medication! It's good to have certain types of medicines on hand for different types of sickness but which ones are the GO TO Medicines? Let's talk about it!

What are the GO TO medicines to treat sick fish that you always try to have on hand? 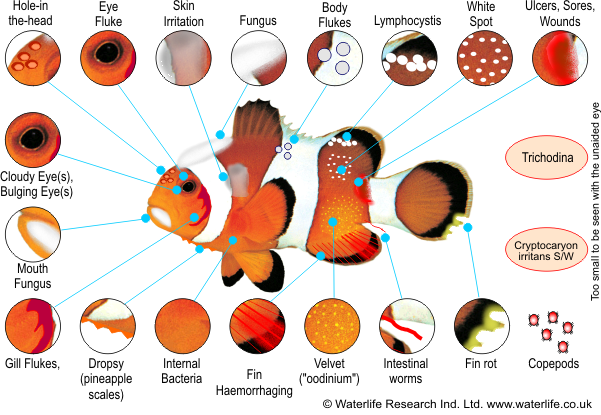 I think I also have a few random API packets products like fin and body cure, super ich cure, etc... but a lot of those are for freshwater or things I rarely use for marine fish.

Rating - 0%
0   0   0
pH pen for freshwater dips which are more reliable and easier than test kits. That is about all that I do for diseases.

Rating - 0%
0   0   0
Currently have prazi, metro, kanaplex, levamisole, and cupramine at hand. I need to pick up formalin.
I also have super ich cure (malachite green/Nitrofurazone) which I’ve never used and melafix I haven’t touched in years.

Rating - 0%
0   0   0
I just started stocking up on these and have never used any of them (thankfully!), so don't take my advice for stocking your own, but here’s what I've started accumulating. Although, I believe what I have will manage most of the common fish illnesses (or atleast the initial treatment).

I post the prices so you can see how affordable it is to have some of these medications on hand. All the medications above can be had for about $30 and if you buy the Hanna Checker too, less than $100. Seeing as how people spend $50 on overnight shipping and several hundred dollars on frags, having medications on hand for the emergent treatment of fish is the least I can do to be a responsible and respectful fish owner.

blaxsun said:
Polyp Lab Medic. In Canada, we've very limited to what we can treat fish with (no copper, no prazi, etc.)
Click to expand...

I second that. I used Poly Lab Medic with my Ich outbreak in my DT along with Vitamins and garlic soaked Nori.
6 out of 21 fish did pass but the rest recovered.

Ich has been gone 3 months now.

Jeffcb said:
I second that. I used Poly Lab Medic with my Ich outbreak in my DT along with Vitamins and garlic soaked Nori.
6 out of 21 fish did pass but the rest recovered.

Ich has been gone 3 months now.
Click to expand...

Same, except it was velvet (nasty stuff). I've been adding Selcon as well.

Rating - 0%
0   0   0
Rally Pro, Cupramine, Paracleanse (metronidazole+praziquantel). I only had Rally Pro before due to Canada's laws on fish meds, but managed to get my hands on the others.

I think I also have a few random API packets products like fin and body cure, super ich cure, etc... but a lot of those are for freshwater or things I rarely use for marine fish.
Click to expand...

in addition to the above, I've also got:
cupramine (don't like to use this any longer, which is why I didn't mention it before)
paraguard (also don't use this much, but have it if necessary)
I have about 10 packets of Safety Stop dips, which is formalin and methylene blue.
I also have melafix that I mostly use for dipping corals, but have used it in a fish QT before.
I also have a bottle of kick-ich, which came in a combo pack with the Ruby Rally Pro. Have never used it though.
I also hve some fenbendazole in the form of dog dewormer powder.
and last but not least, H2O2, which I use for a lot of things. killing aips, killing algae, killing parasites, etc.

Rating - 0%
0   0   0
I have several different marine antibiotics and also some ich medications.

I have had good success treating cloudy eye and skin infections although occurrences have been rare in my 25 years of marine fish.

R
Fish First Aid Kit - What would you keep on hand?

Nov 8, 2022
chthao
C
L
EMERGENCY What medicine do I give a fish if they’re having red fins and trouble to eat?

QUESTION OF THE DAY Navigating holiday visitors: How do you deal with guests and your fish tank?
2 3

QUESTION OF THE DAY When was the last time you have a had sick fish in your aquarium? What was it?
2 3 4