It's hopefully a beginning of something good. I'll keep this intro brief, so we can focus on the tank itself. It's a 10 gallon Lifeguard Aquatics, rimless. Absolutely beautiful, impeccable craftsmanship. It's expensive for a 10 gallon, but I believe it's worth every penny. Ultra clear glass, incredibly well built. Very well executed rear compartment. Only negative is the outlet setup. It's nice quality components, just not designed as well as I would have liked.

- Eheim Jagger 50W heater
- Upgraded pump (210GPH). Connected to a smart switch to work with Alexa, so I can easily turn it off and on as needed for feeding and maintenance. Hoping to avoid additional pump/wave makers.
- Inkbird smart thermometer with data-logger
- Fluval Sea/Marine 3.0 Nano (Bright Reef preset, violet nightlight)
- 20lb live sand
- Rock sufficient to create a sweet aquascape

Non-coral livestock will be limited to two clown fish and clean up crew. Plus a few crustaceans, like the sexy shrimp which is awesome.

So, I was initially going to have a zoa garden but then I saw a beautiful hammer. Why limit myself, I asked. So, I promptly ignored plenty of good reasons and decided to make it a mixed reef.

Here's the general idea of what I'd like to do. I welcome all feedback and suggestions. The depth scale may seem way off, but it's due to the angle of the camera when the photo was taken. Par values are as stated by Fluval with some guesstimates for in-between depths.

It's hard to see in the photo, but there are areas of shadow where there is almost no direct light. This was intentional. That piece of rock was originally upside down. I flipped it to create more light levels and some shadow areas for low-light corals. 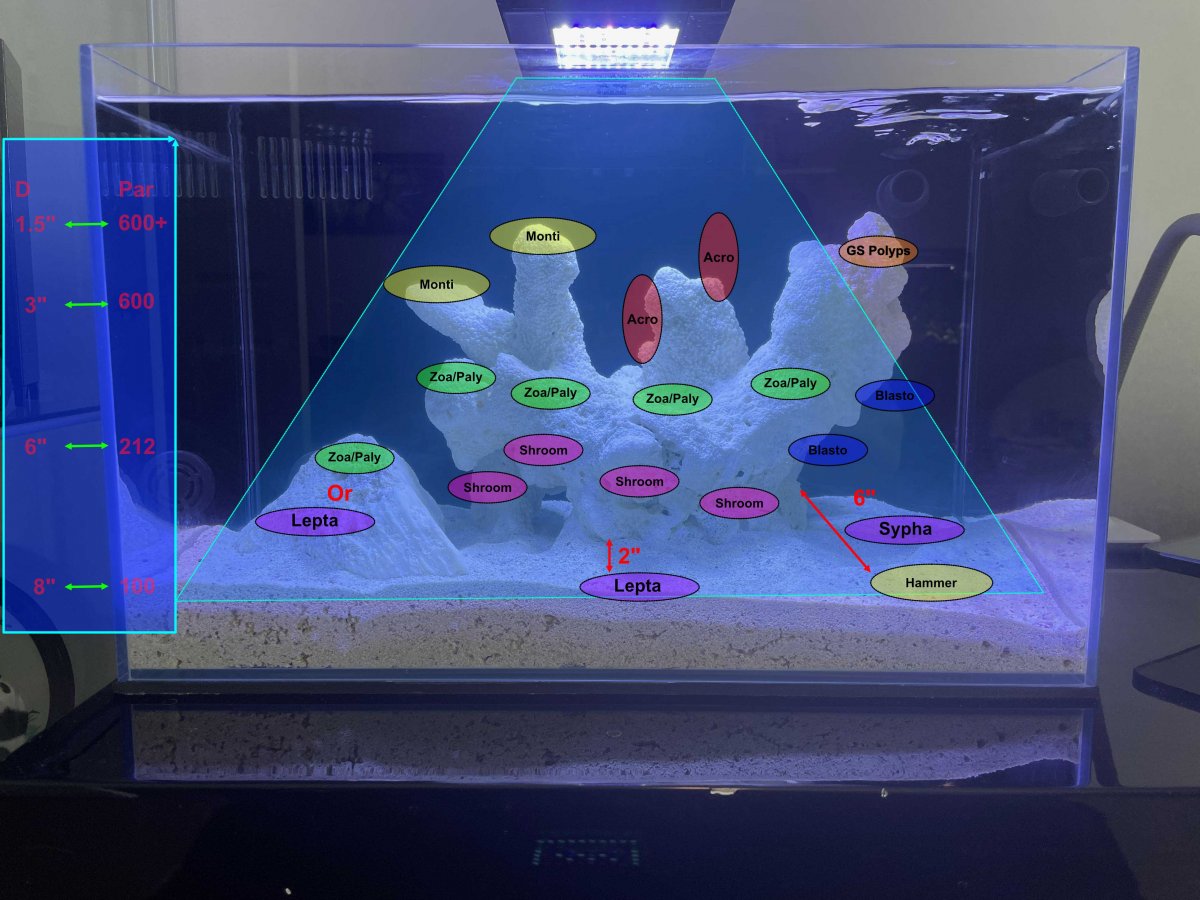 Filtration is another issue on which I would welcome your advice.

Here's the plan for the back chamber. I am concerned that the chemipure will strip too much nutrients as the stony corals grow. Is that a thing? I know they need phosphates and nitrates. I am pretty sure we're okay early on (maybe the first year) but in the future, it might be an issue. Does this seem right or should this be addressed now?

The factory sponge is pretty large. I am not a fan of sponges to be honest. I don't have any data to back this up, but have this feeling that they just become nutrient factories. They really are more of a biological filter that is also expected to act as a particle filter which doesn't make sense. Unless you clean them very frequently. When you do eventually rinse them out, I think it messes up the biology and impacts stability of the tank. I decided to keep it for now and added a polishing pad that covers it, so little to no debris gets into it.

What are your thoughts on this? 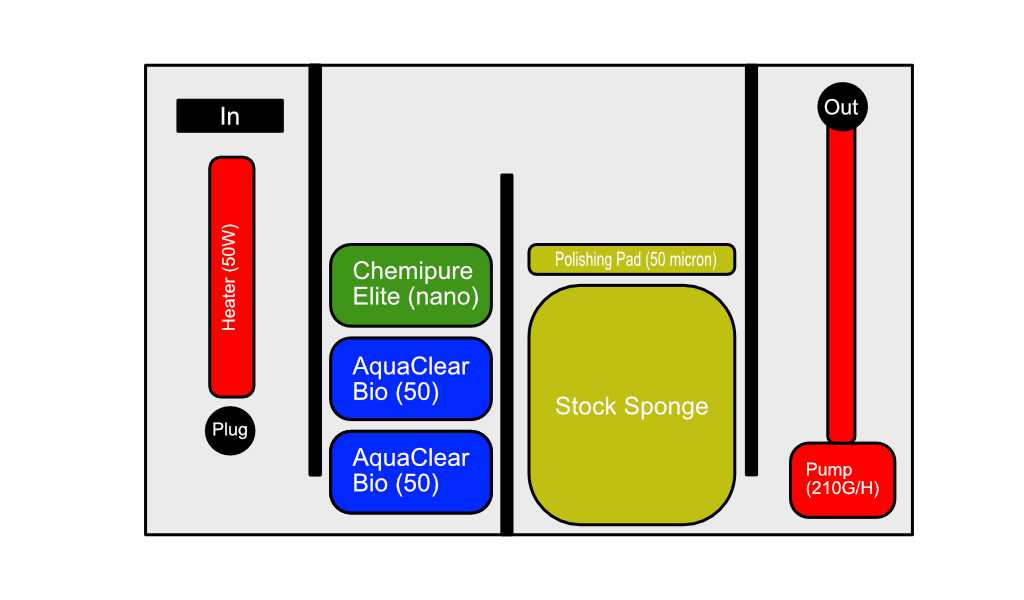 Looking forward to your feedback!

Love the detailed plan on your coral shelf, for the sponge replacement have you looked into intank media racks? You could put some other media besides the sponge and run your polishing pads in the top chamber.

Tank looks great! X2 on the Alexa switch for the pumps. Run all mine to google

look into an ATO keeping your levels with evaporation on a small tank will be rough.
OP

Reefingwithreefer said:
Love the detailed plan on your coral shelf, for the sponge replacement have you looked into intank media racks? You could put some other media besides the sponge and run your polishing pads in the top chamber.

Tank looks great! X2 on the Alexa switch for the pumps. Run all mine to google

look into an ATO keeping your levels with evaporation on a small tank will be rough.
Click to expand...

Yup, amazing how fast the water evaporates. I got ATO on order. A very simple one that uses plastic bottle on top. It’s really the only option for a nano that is reasonable in terms of space.

I thought about a basket, but don’t think I need it. It’s not that tall and I can stack media bags without worry about flow. Any suggestions on the media I should add, if any?

I’ve always been a fan of purigen, you could throw extra live rock in the chamber as well which is something I’ve done forever.

Intank was more of a question than suggestion as I’m dealing with some of the same restrictions with my AIO And how to organize one of my additional chambers. Right now my middle chamber is haphazardly filled with different media bags and rocks. And then an aftermarket sponge and two filter pads.

also if you’re ever considering keeping a qt tank you could leave a bag of ceramic bio rings that you can drop in the qt to speed cycle your next tank as needed.
OP

Fish are in and ATO installed. 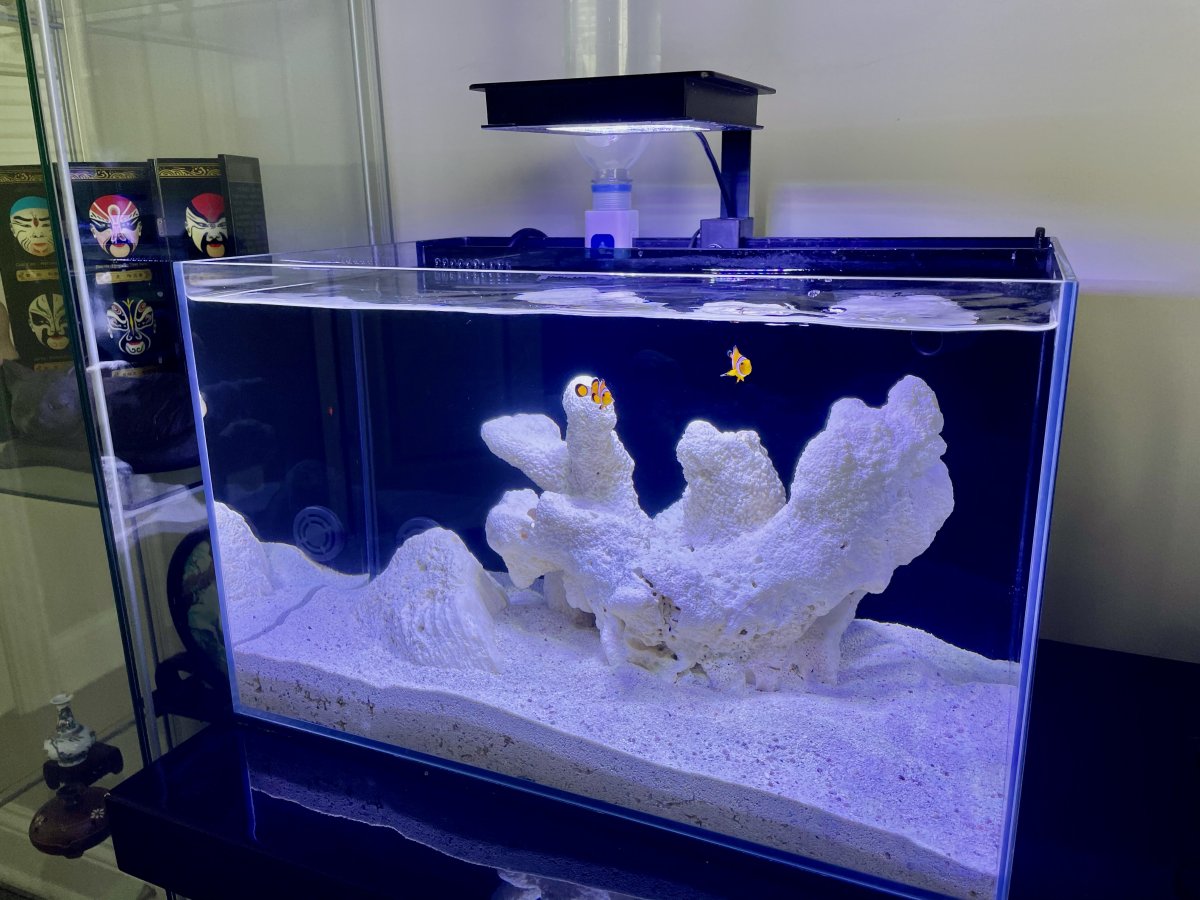 Changed the back chamber layout. Moved everything from chamber 2 to chamber 3 and removed the sponge from chamber 3. Retained the polishing pad, which I replaced twice a week, in the 3rd chamber. Filled the now empty chamber 2 with live rock rubble. Added three live rocks to the display to help speed up Coraline algae growth and to shorten the diatom bloom phase. I also think it looks more natural and creates a more interesting space.

Last, I ordered a programable wave maker intended for a nano reef. Looks fantastic, can't wait to get it.

Have you thought about renting or purchasing a PAR Meter to configure your lights? This is one area that still confuses me being new to the hobby. Curious how others are doing it.
OP

This1Guy said:
Have you thought about renting or purchasing a PAR Meter to configure your lights? This is one area that still confuses me being new to the hobby. Curious how others are doing it.
Click to expand...

No, I haven’t. I did upgrade to Red Sea 50W though and depend on the well documented data on their website. AI Prime and other popular options will have ton of measurements for you to reference.