Namaste y'all, Sammy here from Eastern india.
I am having another foray into reefing after a long while. I was 16 when I started my first setup, I am 27 now. I had a 3 feet, 70 gal setup with mostly Lps, a huge sebae anemone, few tridacna clams, tubastrea and nps gorgs, and few acros too, with a hang on bubble magus nac 5e skimmer, Chinese Dsuny/popbloom leds, a sump fuge with pl lights lol. I didn't have any major issues at my watch.. but to my misfortune sadly, it leaked while I was away for uni. Tank got shifted elsewhere and things went down south from onwards,
I've been wanting to start over for a while and build a somewhat low maintenance setup.
My goals are for a mixed/grow out tank, a bit heavy on NPS especially tubastrea, orange cup, sun, black sun etc. dendronephthea, umbelluifera, nps gorgs and so on too.
And this time get more of what we in India consider 'Import' and less of 'local' that is stuff collected in snorkeling depths from reefs in india. They in general are more of greener, dull pastel morphs albeit much cheaper. Some people fill out their tanks with those and I would presume mostly kill/crash the stuff out of ignorance. And officially its all illegal, all 'reef building' corals are technically banned as a schedule 1 sp. Under wildlife act. But like some things out here it's an unregulated circus haha.
That aside this is some equipment I got for my setup. Got some low iron glass cut out, and planning to diy the sump out of acrylic.
And hopefully will be mostly fun! 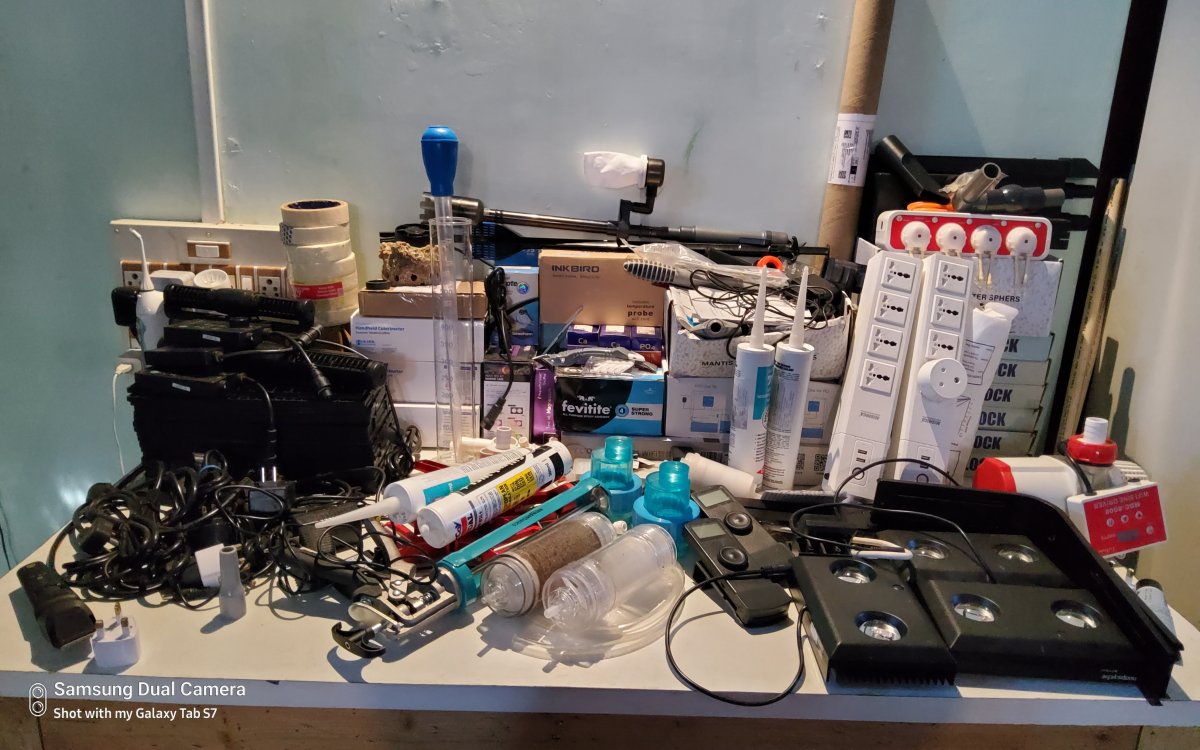 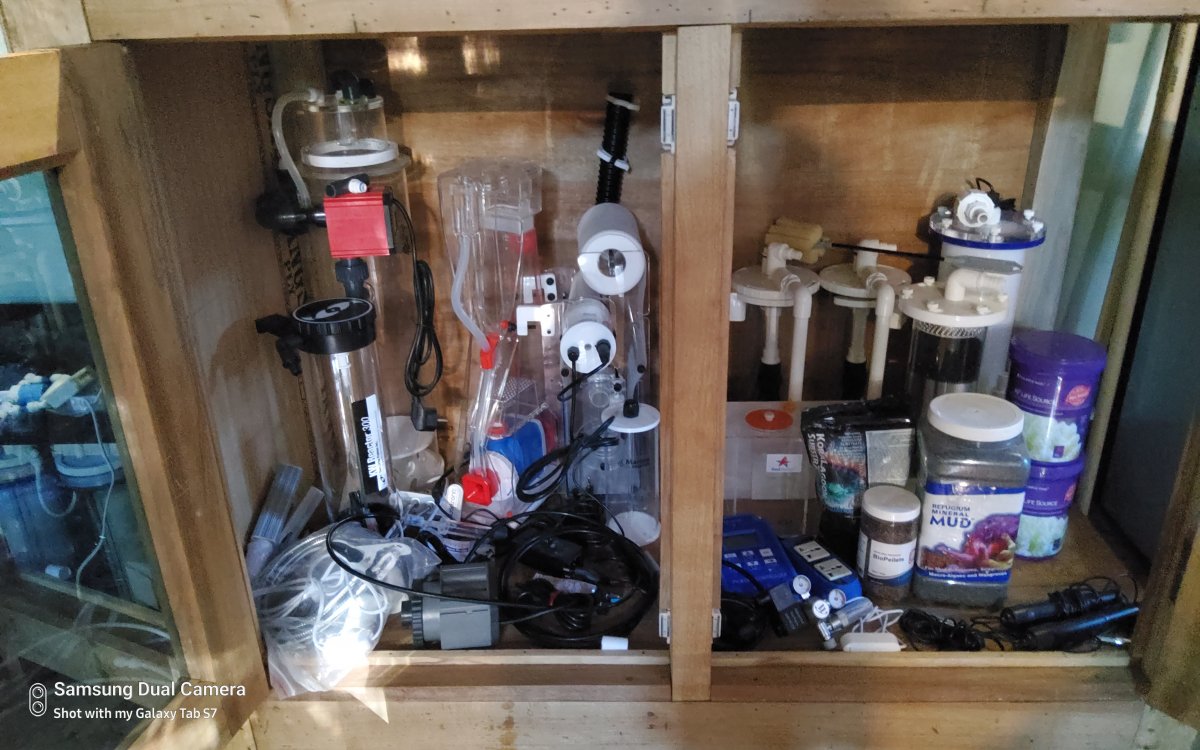 Looks like you’ve got quite a bit to get you started. Should be fun. Good luck!
OP

Thanks! The plan is to implement heavy input heavy output nutrition wise. There aren't any decent reefers or reefs in my entire region. Even if there are due to it being a grey area legally, I won't be getting any help, hence some redundancy.

Nice Bud. are you DIYing the tank too?
NPS are so cool I had a few gorgs and sponges over the years but sadly the gorgs did not fair well.

it will be cool to see what you do with your heavy in heavy out filtration.
OP

Yeah I'll have to diy the tank, maybe get some help. We don't get aio's over where I live. Well maybe Cade but no one sensible gets them. The markup's just mad in india haha.
Last edited: Sep 10, 2021

Been getting horrible tds rejection from my diy Ro, my tap tds is around 100, output is between 10 and 14. It's most likely from the third rate, spurious or fake membranes we get over here, might as well call it the great Indian ro scam

Although in hindsight I used only Ro and no Di resin previously, Everything looked dandy, got tunicates and sponges growing too, tho might have been the silica

, tds used to be much higher, It's well water, now we have a commercial de-ironing thingy. 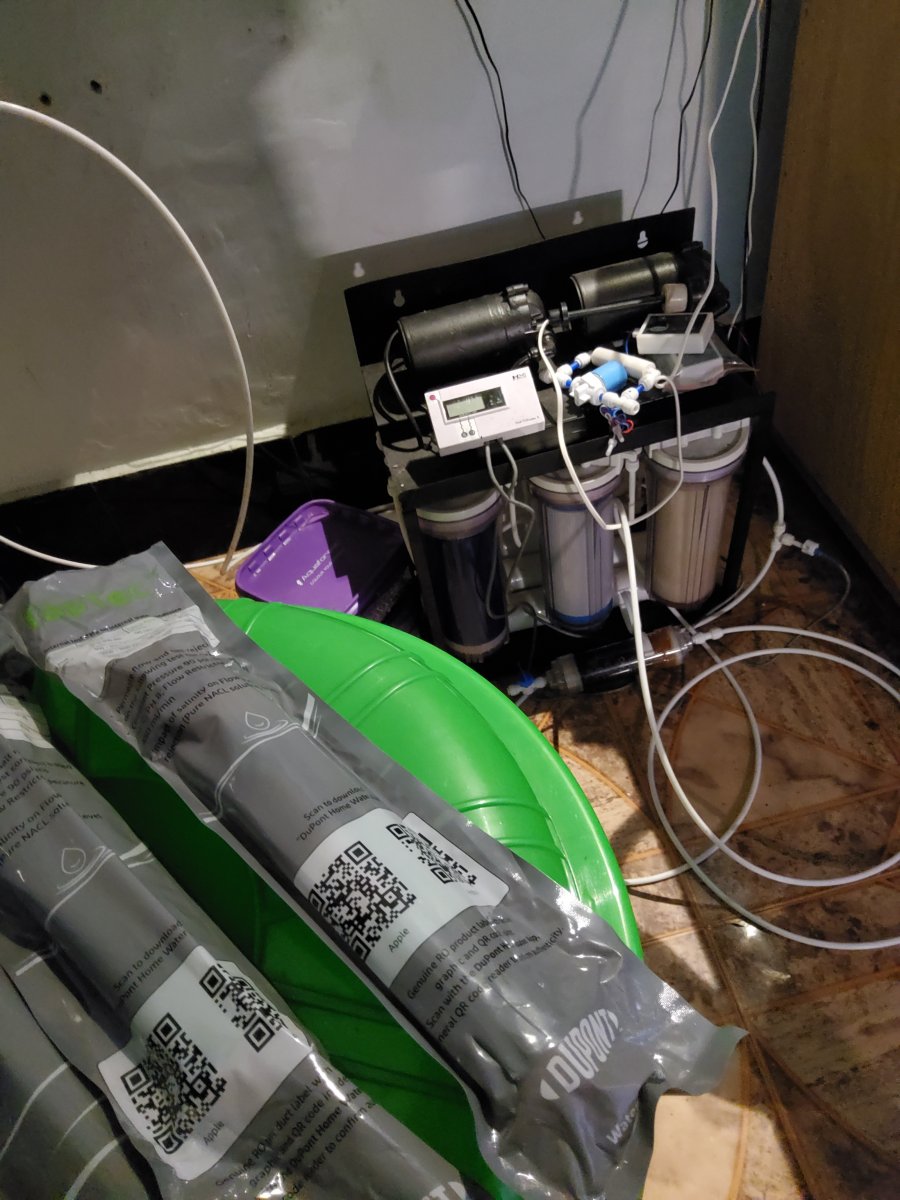 I didn't know I could get more output by just adding another membrane to the drain line, so I just put another 90psi pump

Might add a third membrane and housing in the reject line.
And plumb an auto flush circuit. Was thinking about a high pressure switch, perhaps later.
Got new membranes, dupont taptec plus, somewhat affordable and advertises >98% rejection for below 500 tds, app QR code for authenticity too, hopefully will check out alright and save some resin money, maintenance.
Last edited: Sep 11, 2021
OP 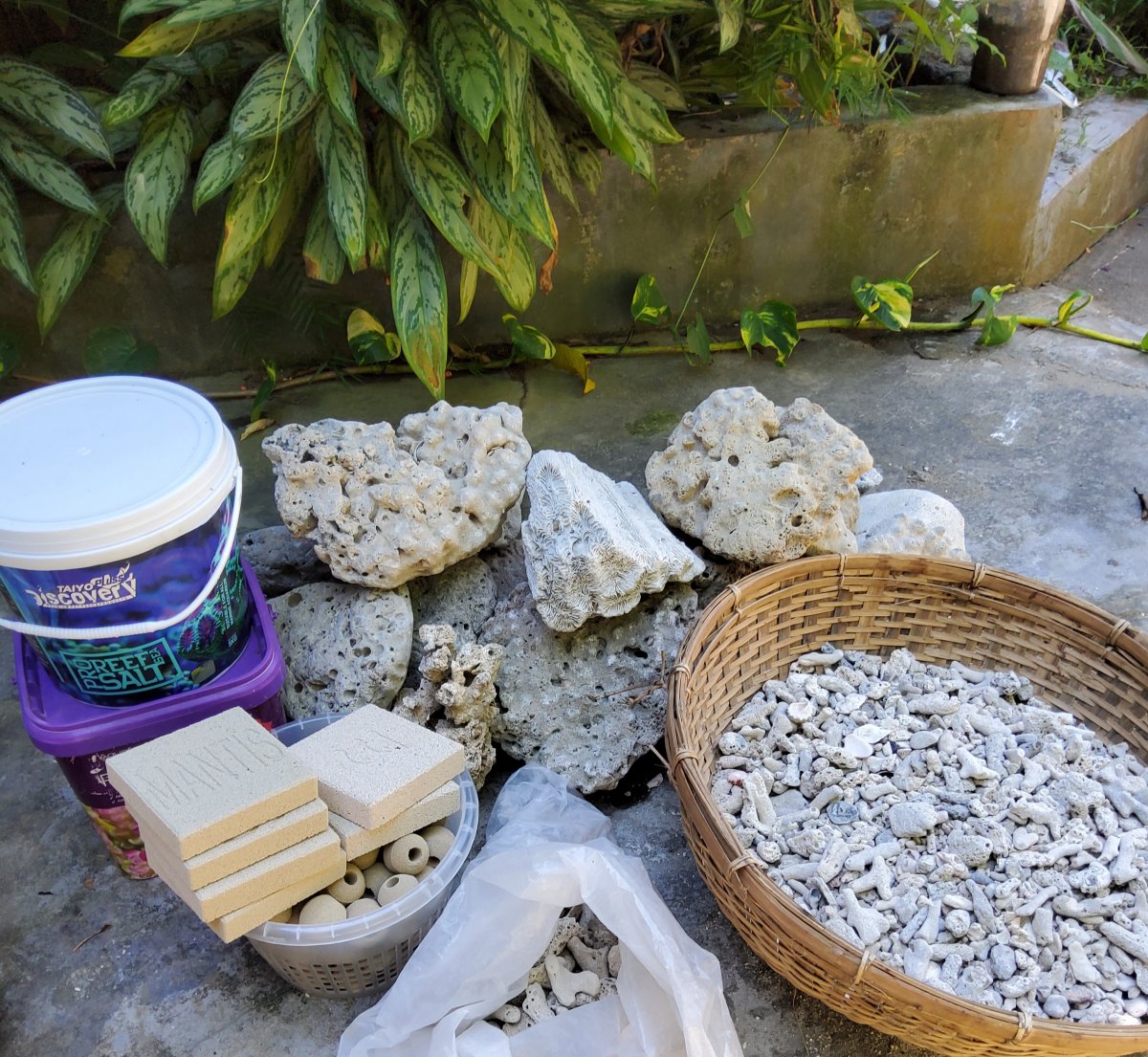 Cooking time!
Got hold of some dry rock and rubble on the low, I think its better than the painted ceramic and PoP/cement stuff and way cheaper,although hard to source too, hope it stays that way. 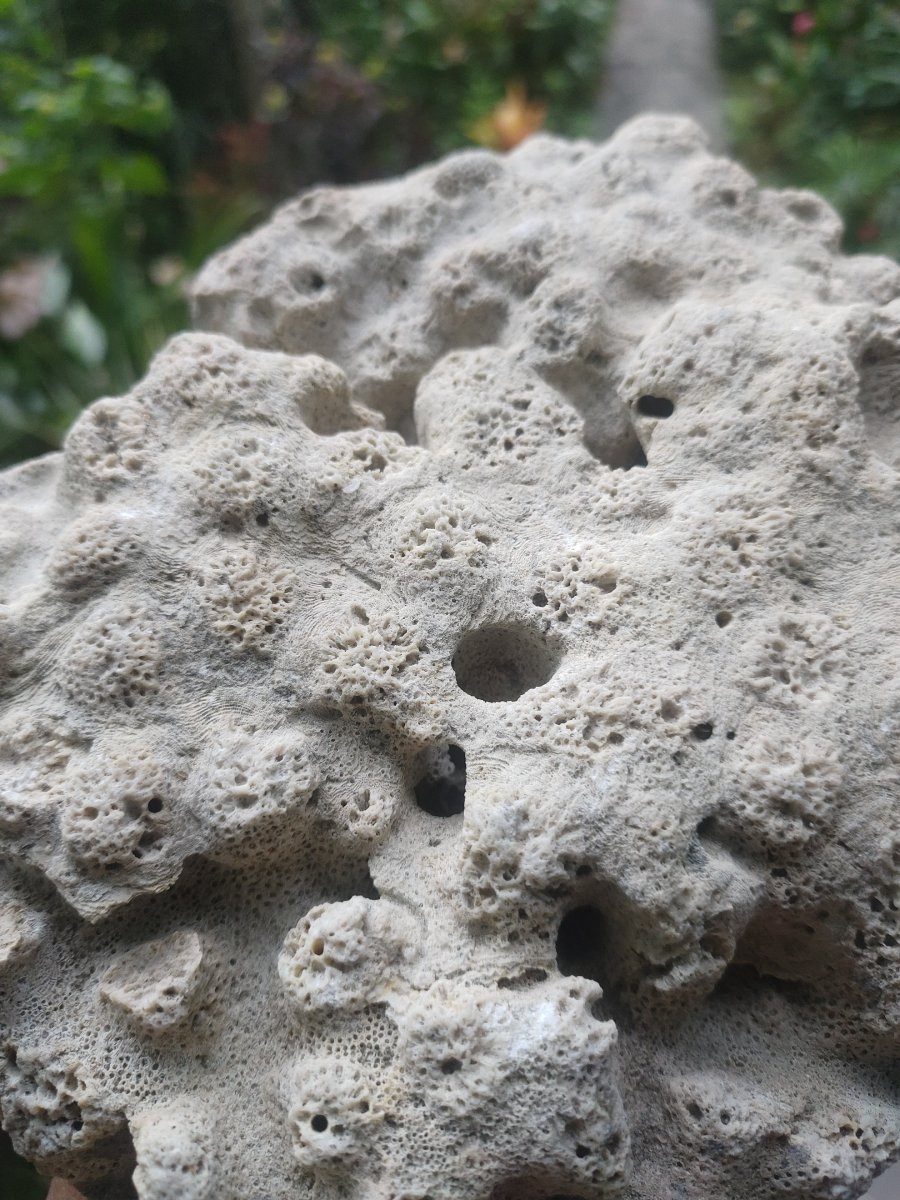 I can get the live stuff but I don't wanna risk the pests.
I shelved the idea of using the mined rock I had. But someone said to put it into cycling as well. 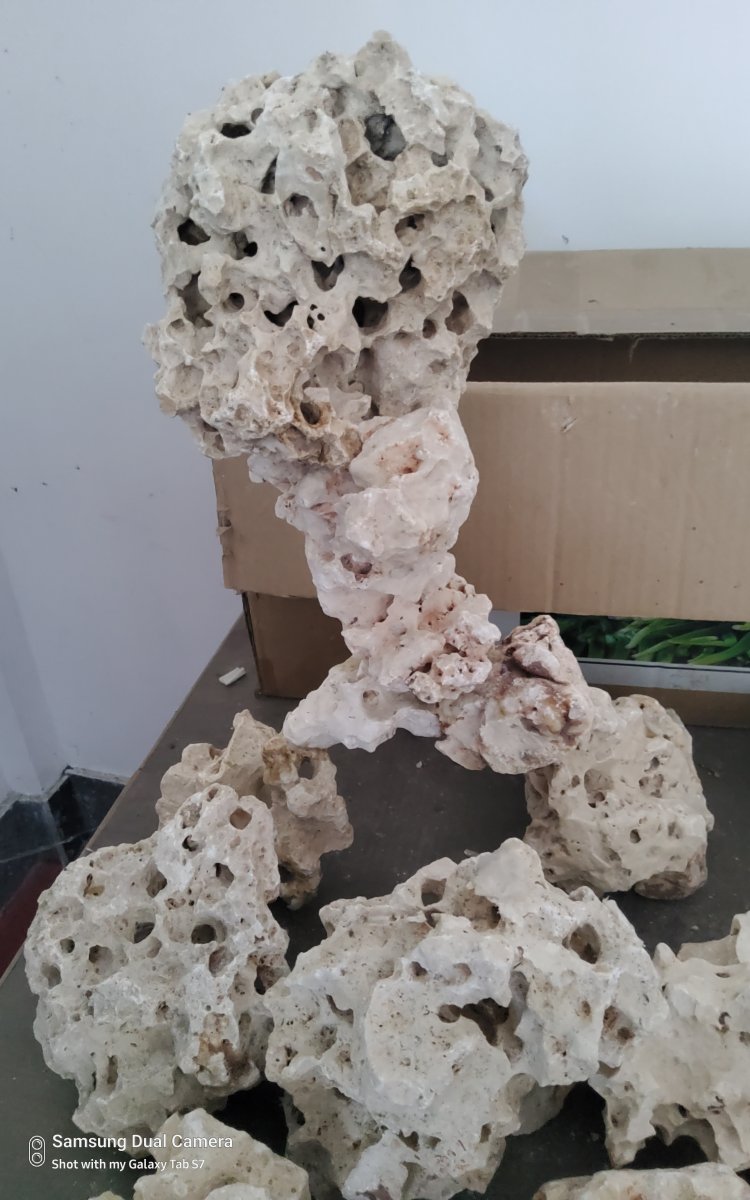 You have a lot of equipment
OP

noopsyche said:
You have a lot of equipment
Click to expand...

Because I am very lazy

Maybe I won't need, but it's nice to have,it isn't very expensive.
I hope I can put everything to good use to keep my animals happy.
D

How is it coming along?

davy31 said:
How is it coming along?
Click to expand...

Somewhat slow, currently seeding my dead rock, coral rubble, bio media in a vat. Getting some uncured live rock shipped tomorrow, will cure it in the same vat.

I've got 70 pounds of dry reef rock and some more of mined rock I wanna cycle/cook in a 300 litre vat. I am not very keen on live rock because I don't want any pests. Although I know it creates less problems and swings. Ideally I want it to soak for four months but maybe can stretch it more. I...

www.reef2reef.com
Its gonna take two months at least.
Meanwhile i will build my sump, but i need some advice in that regard. I made my display tank, was not very hard.
I am having a minor setback with my stand/table top, i used freshly milled timber, which got shrunk and warped due to drying. Will have to get removed and levelled, topped with a granite slab or marble.

Could have gone bigger, with less equipment, a slightly bigger skimmer. But i just want it in a certain way, what i assume will be enough for certain types of coral, Also i am curious about using new types of gear. You don't really need as much to get going at all.