This is my 150 Deep Dimension Extermination project. The goal of this tank is to support a pair of Latz clowns, a gigas clam, a bunch of BTA’s, maybe a future H. magnifica, and primarily SPS corals.

I accepted a rock with one visible aptasia when I was new to the hobby, and spotting an occasional aptasia wan’t an issue for quite a while. A quick shot of kalk and they were gone. Well, until there were thousands or more. I tried drying out some rock, curing it for a while, then swapping my rock out. That put a notable dent in them for about a year before they started coming back more quickly than I could eradicate them and I eventually came to the conclusion that I would need to perform a full reboot to stand a chance. This created the opportunity to address my energy consumption concerns, eliminating my basement sump in favor of a closed loop filtration system consisting of a Royal Exclusiv RD2-230 return pump, ARID N-24 algae reactor, Geo calcium reactor, and inline Apex probe holders. I also plumbed in provisions so that I can plumb in my Lifereef skimmer externally in case I decide to run it. The display side will have 2 Radion G4 Pros and 2 Tunze 6255’s for water movement.

The first phase of the project was to dry out an adequate amount of rock to start a new tank. I removed a couple rocks at a time until I had enough and let them dry for months. Once I was ready, I set up a 40 breeder, moved my rock, water, fish, and some corals into the tank, and began cutting up the plumbing for my display. Everything looked good. My fish were swimming about and I went to bed around midnight to get a fresh start in the morning. Well, Murphy struck and all of my fish perished. I suspect it was lack of oxygen, even though there was tons of surface agitation from my MP40. I’m not sure what I could have done, but I suspect that my basement has very high CO2 levels as I’ve always struggled with low pH even when running an airline outside and leaving windows open, and perhaps this contributed to their demise. Either way, I have cut my basement air out of the equation with my new setup.

I’m experimenting with a running my return through the bottom of the tank. I installed bulkheads over the stock holes since I’d removed the stock overflow. One is capped off and the other had a valve tied into my drains. For the reboot, I simply redid the plumbing so that it is now my return. This return method is largely to ease sealing off the top of the tank for preventing jumpers and also serves as an emergency drain in case my tank fails. I can simply turn a valve and begin dumping water down a basement drain. I know there is always a risk of a plumbing failure, but I decided that being able to intentionally drain it was more important to me.

An issue that I had previously was fish getting into the overflow and sucked down the BeanAnimal siphon drain. My downturned elbows weren’t quite closed off enough to prevent fish from getting sucked in and I had a few that either got stuck between the elbow and the glass or made it to the gate valve. Since my filtration is a closed loop, all of my plumbing is always fully flooded and I am using strainers over each bulkhead. I believe this will prevent any fish from getting stuck to one of the drains. I also recently saw a pic of an octopus tank and I realized that my new plumbing setup might be good for such a system.

My new method dramatically reduced my energy consumption. My old return pump consumed 300 watts. The RD3 is set for 150 watts, though that may change. My tank is now evaporating about a gallon per day instead of three or more, and my basement dehumidifier/AC is running far less than before. Initial results suggest that I’ve cut about 6-7 kwh per day from my electric bill, though the change will vary based on the season.

Sounds interesting!! Have any pics?

Glad I never had aptasia like that. Cant wait to see some pics. I have a 150DD also.

Out with the old sump. It was passed along for free as a fixer upper. 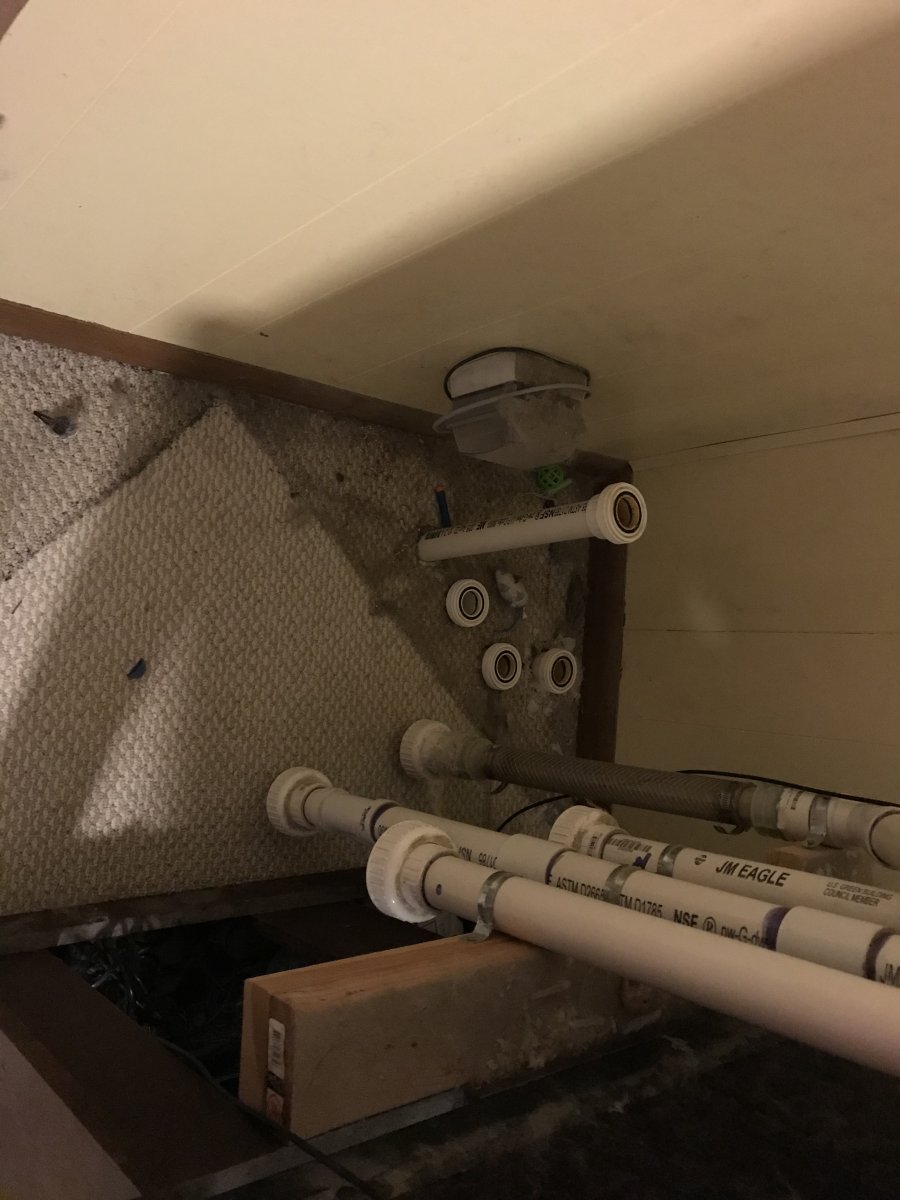 First glimpse behind the tank in years. 1 dog, 4 kids, and 5 cats make for a lot of hair and dirt that even daily vacuuming can keep up with. My wife...has regretted picking a white carpet since a week after it was put down. 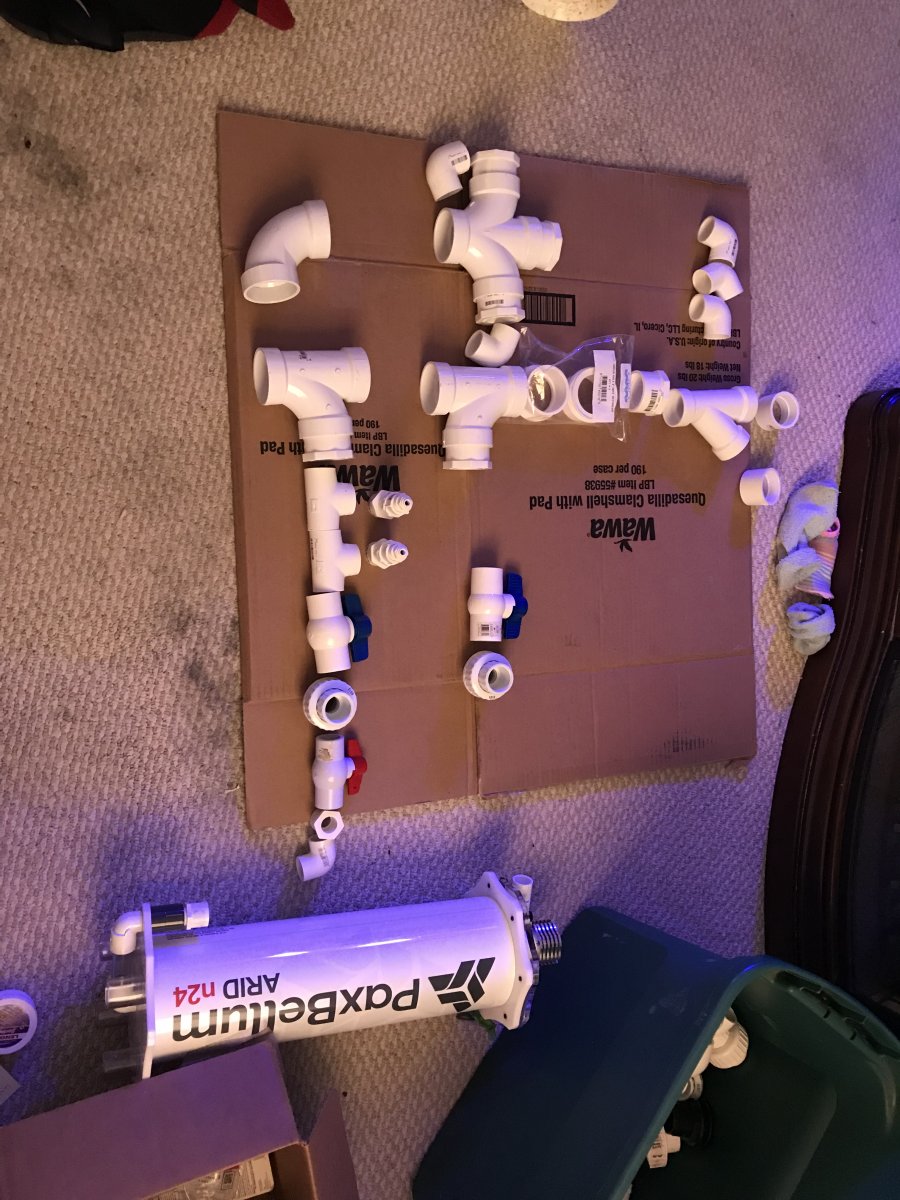 New plumbing all laid out. 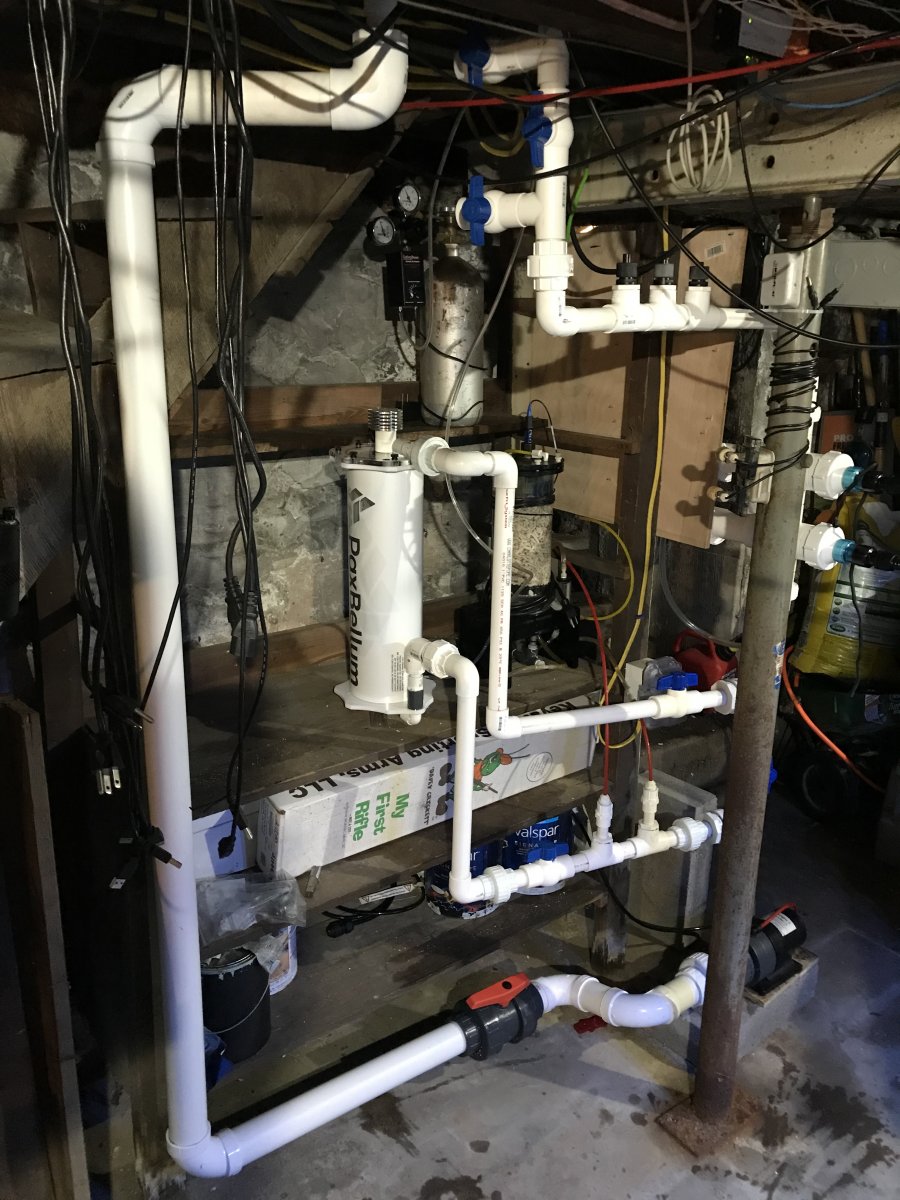 Everything installed, though I had to swap my trusty K2R calcium reactor for a new Geo 618. The K2R just couldn’t hold a seal with ~10 feet of head pressure. Note the probe ports inline with the return for pH, conductivity, and ORP. 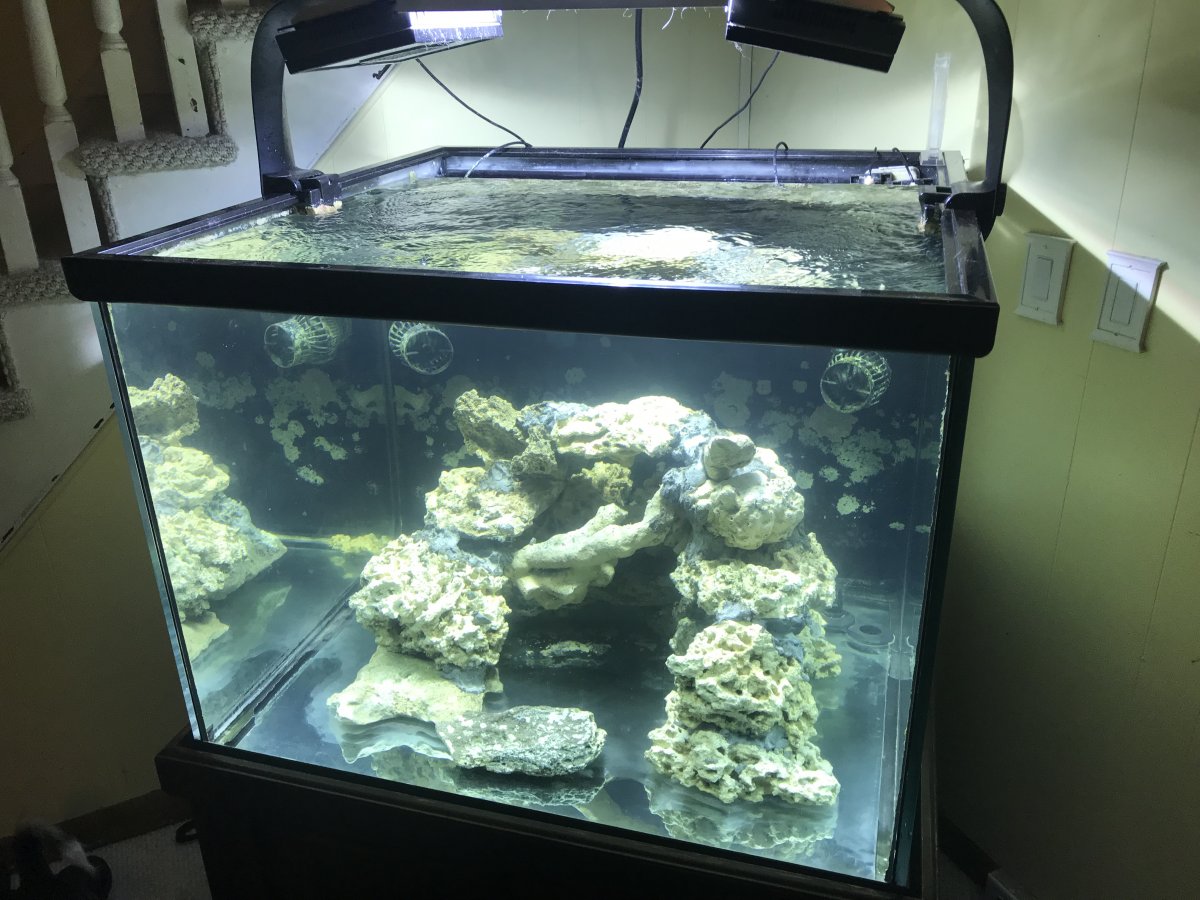 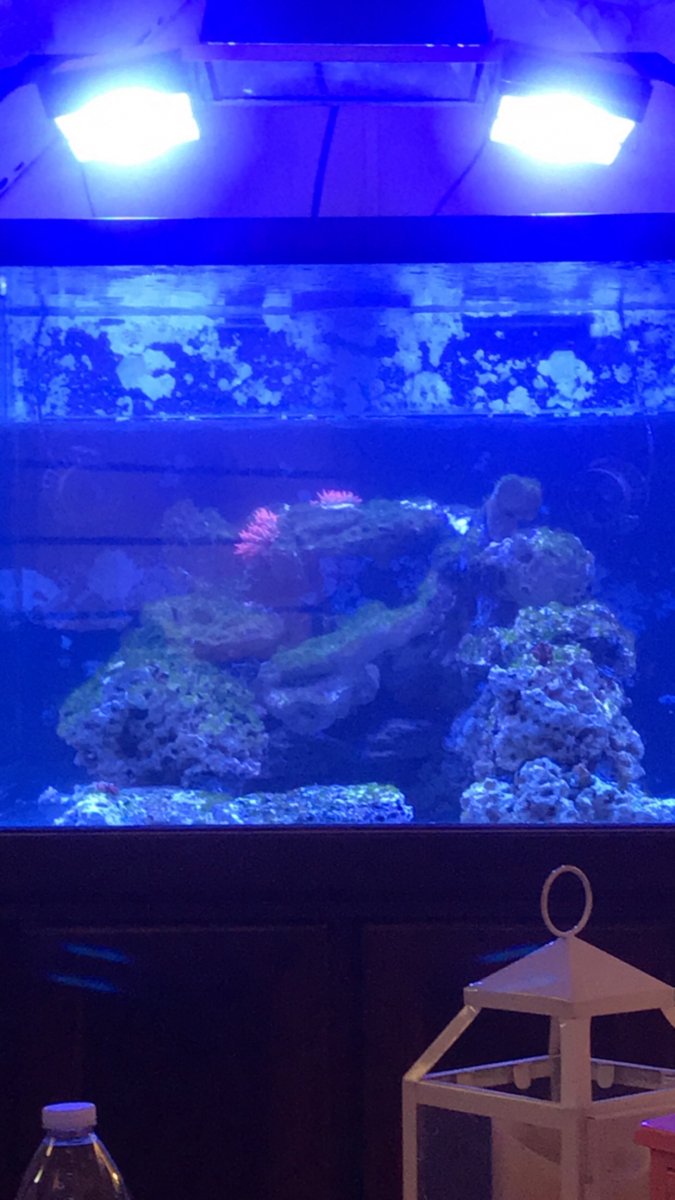 Ah, the algae expected from using dried out rock without curing. I’ve set my lights to all blue to minimize algae growth and added a pile of snails. A few shots of lanthanum chloride and the ARID knocked nutrients to a hard zero in a few days, so now I’ll likely have to periodically dose NO3 to keep up with leaching PO4. 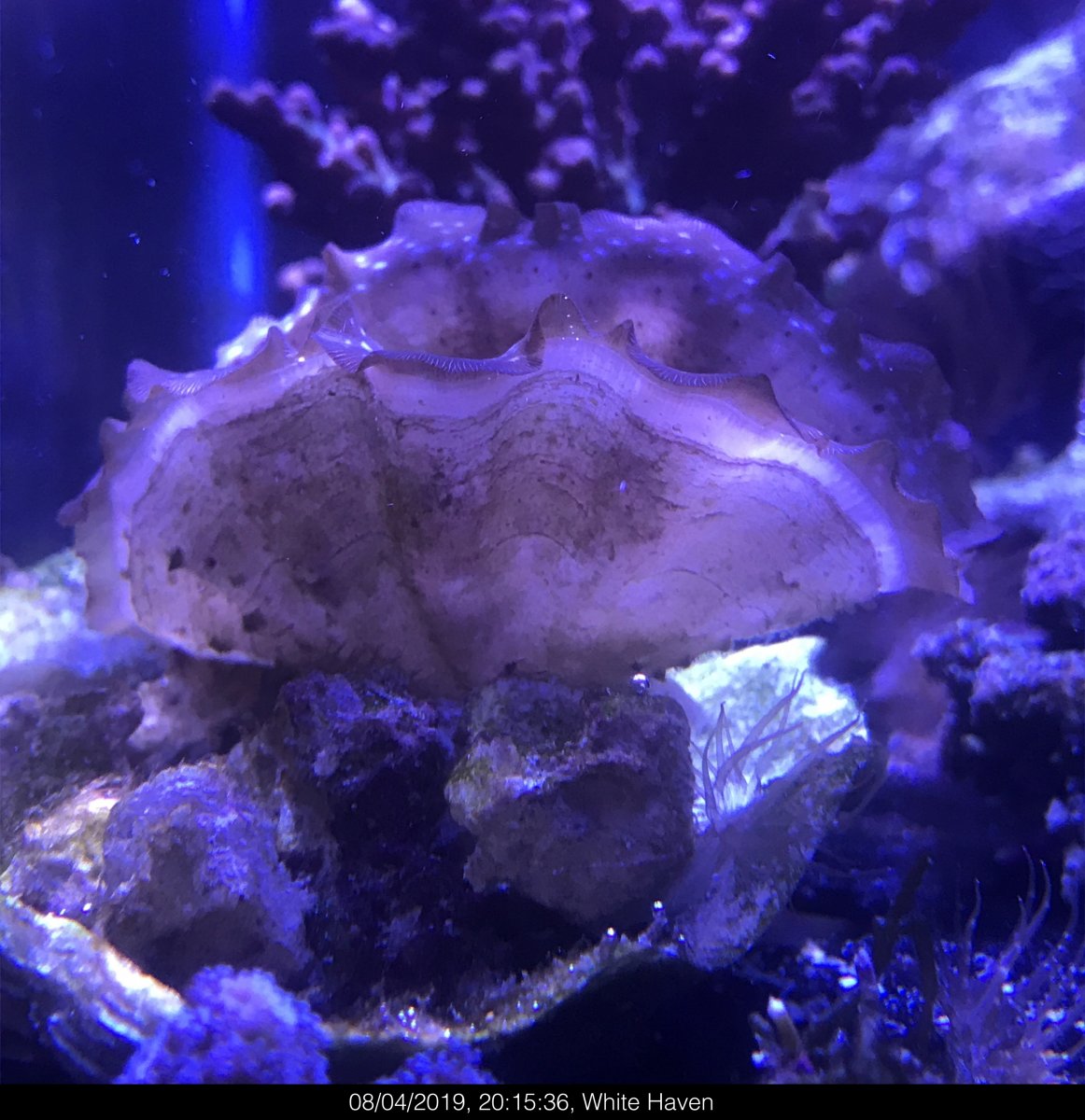 Here’s the centerpiece, a gigas clam along with a pair of Latz clowns. I’ll have to snag a pic sometime.

My long term plan is to keep the Latz, gigas, BTA’s and SPS. Short term, I’ve got to fully integrate my Apex and clean up the wiring as I want to keep maintenance simple. I also need to find a solution to protect my ATO floats since they are in my overflow as that is essentially my return chamber and is subject to light exposure and snails. I also need to solve how to hold the floats better as the tank rim makes it difficult to attach magnets. I think I’m going to use acrylic trimmed to fit the space snugly, but am not committed to that. 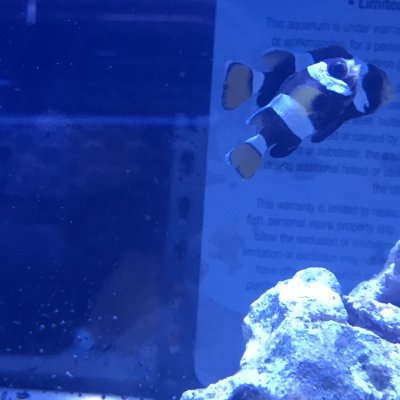 Cool. What lights are in the pic?
OP

Silent said:
Cool. What lights are in the pic?
Click to expand...

Radion G4 Pros and a 400 watt halide in the center, though I don't think I'll use the halide. One of my focuses on the build is energy efficiency, which means minimizing the need for heaters, chillers, and fans.

This is just a temporary lid, but I expect no more issues with jumpers. This lid will become the top of my canopy in a few weeks or less. I just question whether I want to keep the halide. I love the look, but I don’t know that it fits in the energy efficiency plan for the tank and the Radions can certainly do the job. 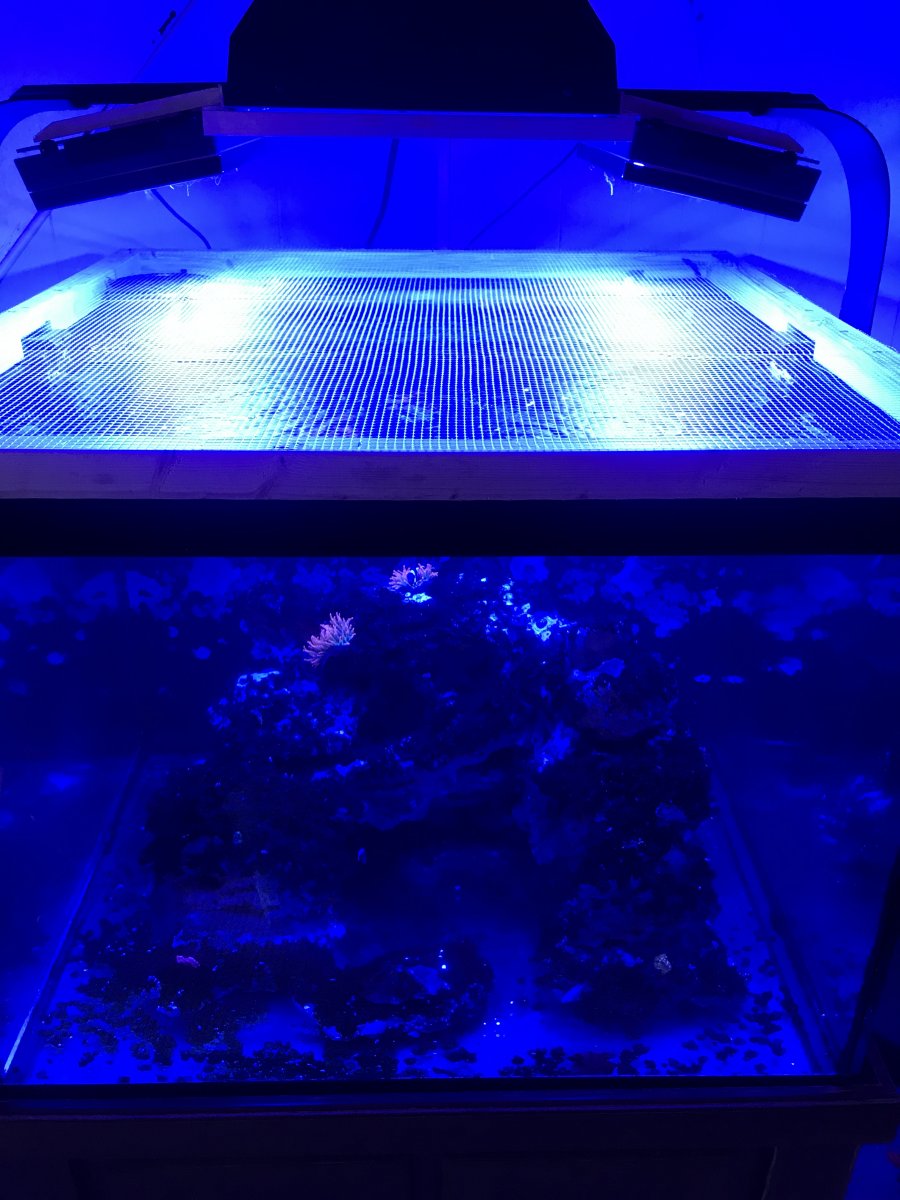 If the halide is a 250w than that's about the same as many leds. If its a 400w than yes it certainly consumes more electricity.
I have 4 120w led fixtures so 1 400w mh with some actinics would be the same if not less electricity.
OP

Silent said:
If the halide is a 250w than that's about the same as many leds. If its a 400w than yes it certainly consumes more electricity.
I have 4 120w led fixtures so 1 400w mh with some actinics would be the same if not less electricity.
Click to expand...

It's a 400 watt halide. I'm debating selling the Radions and grabbing a couple dimmable LED strips for ambient/viewing light and using the halide for punch, but am not really committed.

I have my halides on standby and might use them with my leds in the future. I built my leds with 5 watt cree so i want to try them for a while by themselves first.
OP

I've been hit by a cyano coup. 56 hours after a dose of Chemiclean and it's mostly gone. I'm going to give it a few days, then repeat the dose if needed. I'm also being overrun with ulva, so I reduced the duration of my tank lighting schedule, but kept the peak the same, and increased my ARID time to help with nutrient export. Ulva growth seems to be reduced, but it'll be at least a few days before I check the ARID for growth. I'm off to run some water tests!

150 also looking forward for this build

Here’s an uglies FTS. The water is a little cloudy because I just scraped the glass. I’ve got a 400 watt 10k Hamilton halide and a pair of Radions over it, as I’m torn as to whether I want to run the Radions or sell them and get some LED strips to supplement the halide.

I didn’t take the time to cure the rock that I’d dried out, so it’s fueling the algae. To combat it, I’m running an 8 hour photoperiod to help tip the nutrient uptake toward my chaeto reactor. 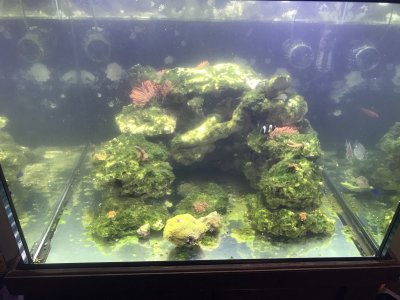 So how are you liking your flow? You have a closed loop return pump and 2 powerheads in the display correct? Is that enough or will you add more powerheads?
Why not just keep the radions and set them for just blue lighting instead of the led strips? Seems like that would be perfect. Maybe even have the other colors on 5% or something.
OP

I'm not quite happy with my flow yet as everything settles behind my rocks. I'm going to change my wave pattern to have one pump pulse and the other run at 20% for a little while, then swap patterns.

As to the lights, the halide forces me to space the Radions pretty far apart so that I had to angle them inward by about 20 degrees. The incentive for selling them is that a strip setup would allow me to put some cash toward other things. After running the halide for a few hours, my tank went from 76 to 81 and wasn't starting to taper off when I turned off the light. Without my basement sump for extra evaporation, I think the heat may be too much to keep with my energy efficiency goal. 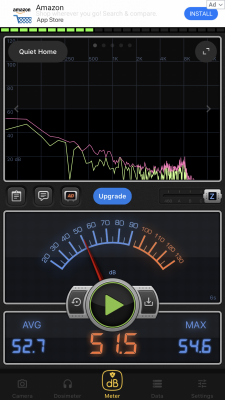 Nice Reboot! Would it be possible to go with the lower 250 watt version of the Halide? I love the look of them.
OP

kireek said:
Nice Reboot! Would it be possible to go with the lower 250 watt version of the Halide? I love the look of them.
Click to expand...

I don't know, but suspect 250 wouldn't do it alone. I think it would be difficult to find a reflector that allows it to punch down 27" while still providing adequate light to the corners of a 36" box.

My current fish list. I’d like a few more wrasse, a mandarin, and a bunch of smaller fish. 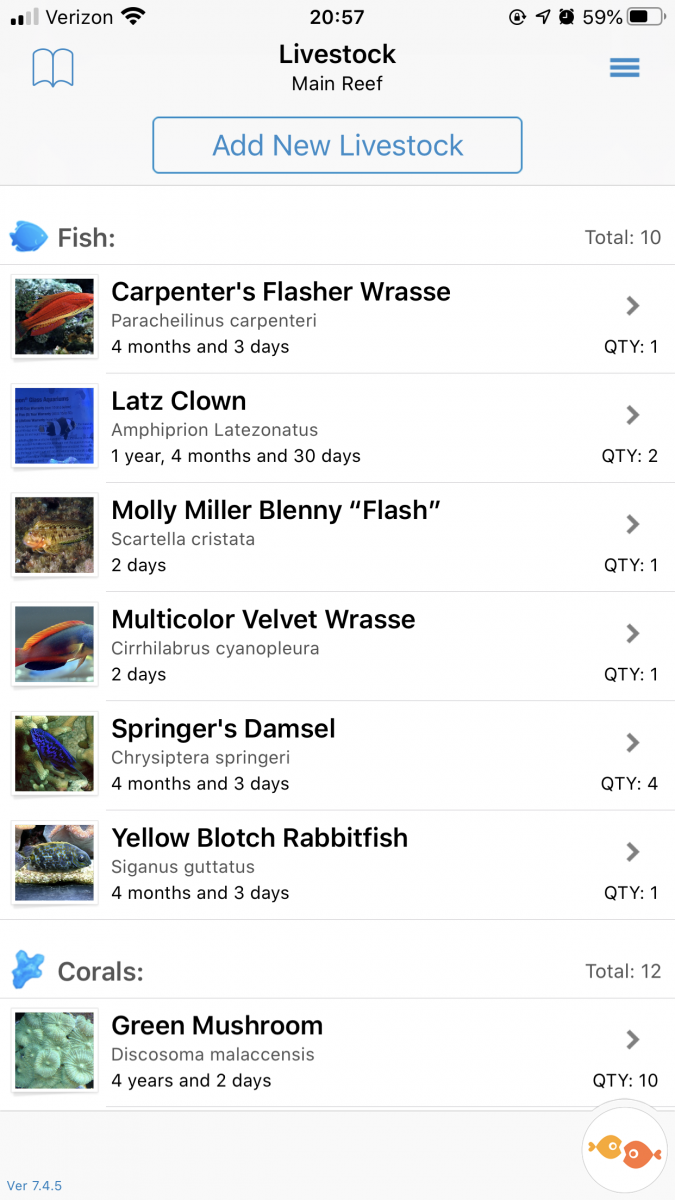 Not great yet, but going in the right direction. Maybe I should have scraped the glass, but I’m okay with it. 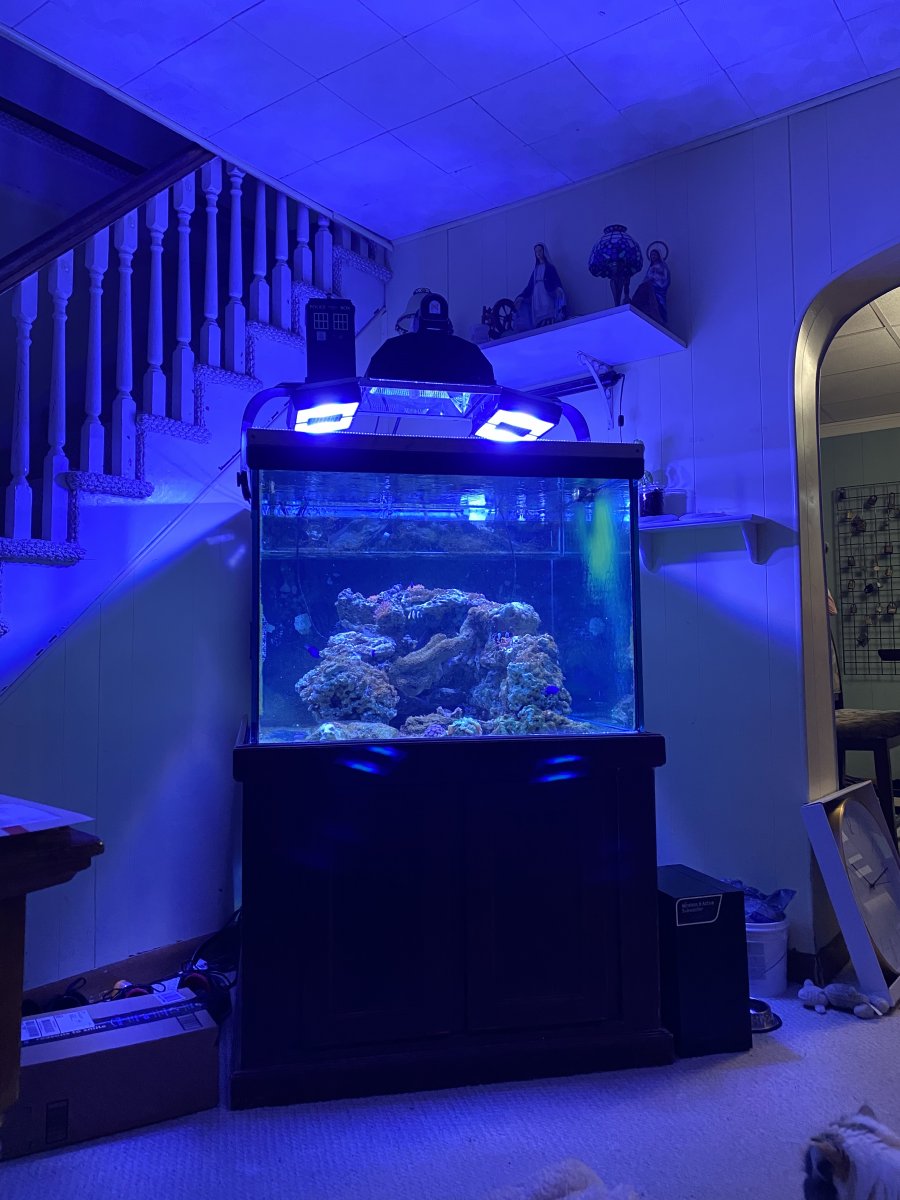