My first ever fish tank. Everything is new or open box (except the Kessil controller). Totally not how I wanted to start, but the local used market after several months produced nothing, and many more months later, still nothing, so I don't regret buying what I have bought, especially since covid came along right after I started- perfect way to pass the time at home!

Although I failed to understand how it would limit mounting an MP10 anywhere near the surface on the back wall, I'm very happy with the overflow, and the way the light mounting turned out and how the light looks on the tank, but some aspects of the plumbing and the difficulty of doing what should have been simple plumbing didn't work out anywhere near what I intended. And overall, sometimes it just seems like a Honda Civic with wobbly wheels and a jet engine strapped to the back; as I have learned more, I think an experienced reefer would approach a smaller system like this radically differently for good reasons, resulting in something much simpler. If I had to do it over, I would have done 2 x 40 gallon breeders in a muscle stand and not worry at all about appearances (save that for after some experience). On the other hand, if the tank succeeds and the stand doesn't corrode or emit too much noise (later update: shockingly quiet- the Kessil is by far the loudest thing, I should have bought the A360x), I will have succeeded as planned and could potentially be happy with this set up for a long time, assuming I like the husbandry part of this ongoing. 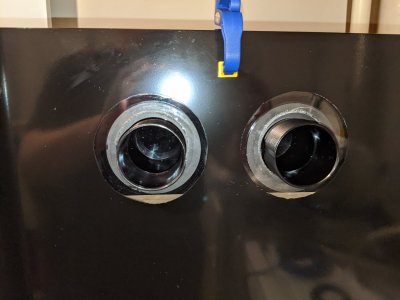 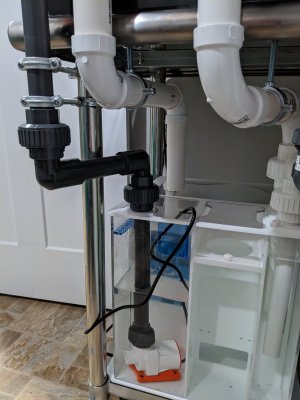 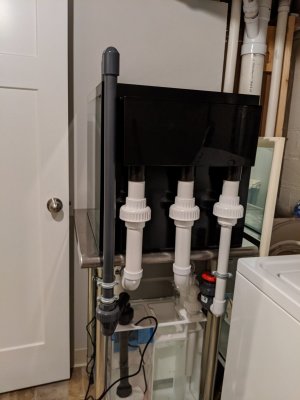 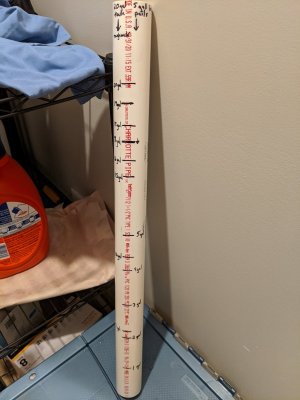 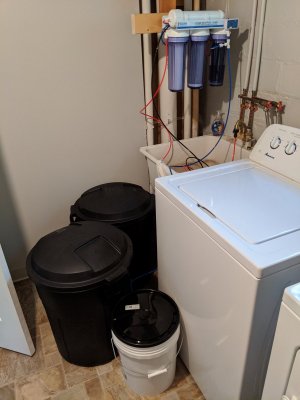 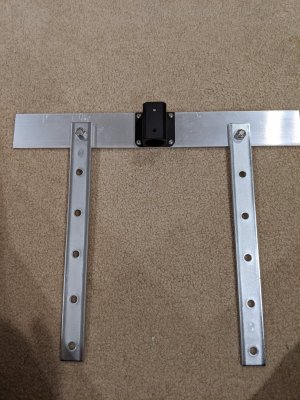 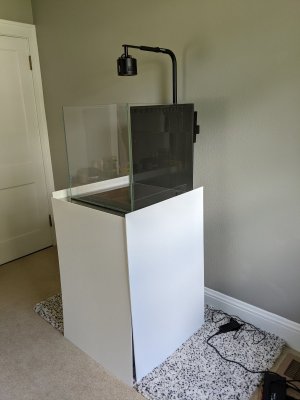 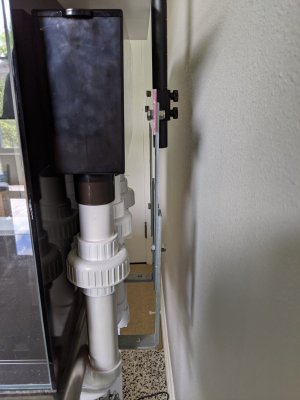 looking good! I'm going to steal your pvc pipe idea for measuring water in a mixing container. Might save me some time in measuring out salt
OP

Reefs and Geeks said:
looking good! I'm going to steal your pvc pipe idea for measuring water in a mixing container. Might save me some time in measuring out salt
Click to expand...

The marks are near the red labeling on the PVC pipe for a reason- saves an enormous amount of time if you do this, FYI. I used the red lettering to visually determine where the water level was, pull the pipe out of the water, and mark it. Otherwise.... guess what? It's actually quite hard to accurately mark the pipe when it's in the water! Just put your finger where the water level is and pull the pipe out? Try it... doesn't work at all! Crayon marker while in the water? Try it... doesn't work! Etc. The easiest and best thing was to sight the water line with respect to pre-existing markings on the PVC. Unless someone has a better idea, I recommend what I did, the lines are super accurate (I double tested things out as I went along just to make sure measurements weren't drifting, etc.).
Last edited: Jul 22, 2020
OP

Aquascaped. Struggled much more with this than I expected to. Tried to make some areas for the fish to hide, not sure how many of the lowest "tunnel" spaces will end up filled with sand. Only plan to do a very thin layer of sand.

That's pukani from craigslist, was given a brief acid dunk by the LFS, has been dry for 6-9 months. Will need to do some glueing and hopefully make salt water and begin cycling his weekend.

Notice the upside down GFCI plug in the first pic. I hack sawed off the ground plug to get that into this old house's socket. Hope it works... seems to. What plugs into that is an American DJ rack mountable line of 6 power switches. 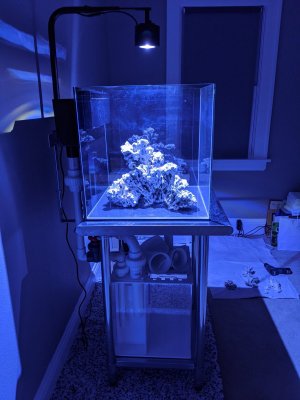 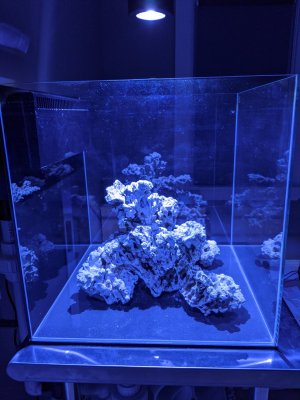 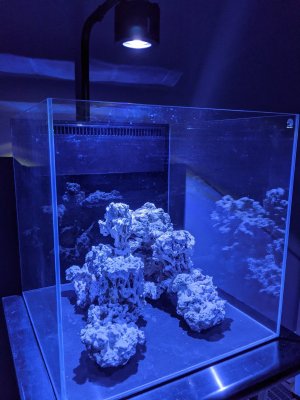 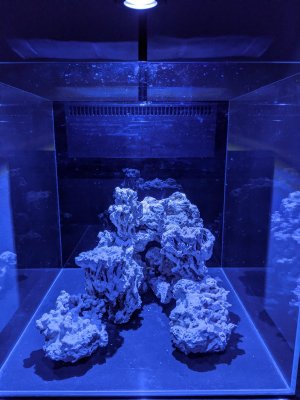 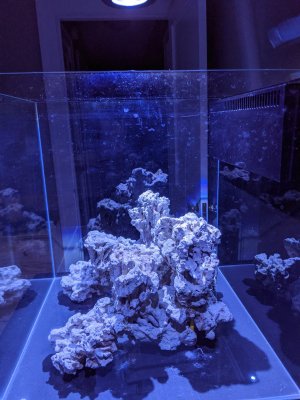 Aquascape do over. It has some shady walls where I plan to grow cyphastria. 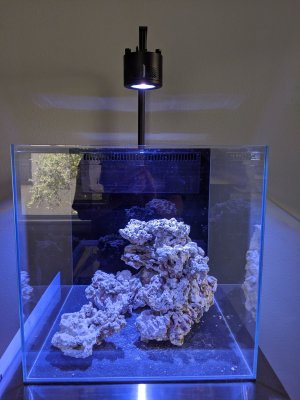 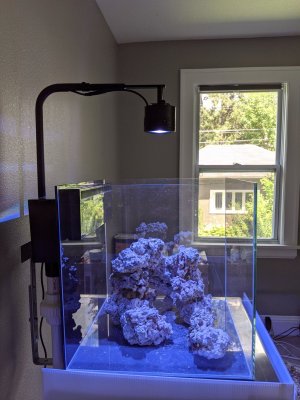 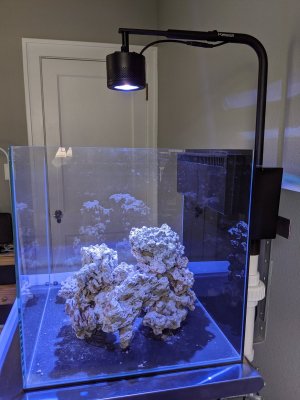 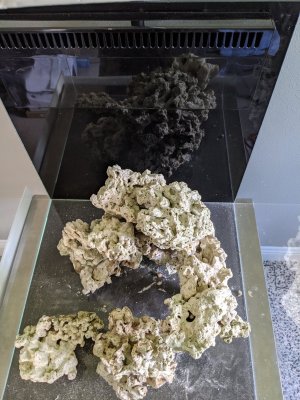 Don't take offense, but it kinda looks Frankenstein-ish. I like it! I was thinking, to make things a it more stylish for your wife and easier for you have you looked at custom cabinet boxes cut so your aluminum stand can fit inside it? I've seen them go for at little as $35 and you can modify them for your stand. Just cut out a top to you your tank size and slip it over the aluminum and seal and stain the wood all the same color. It all hinges on how tall that thing is and if you could find a box roughly the same size. Also, I'd try to make a custom rectangular box going from floor to just above the tank drain box. it could stained the same color as the cabinet and attache to it and it could both hide all the drain pipes and your Kessil could be mounted to it too.

Just some ideas. I really like your project though. It really gets the creative juices flowing lol.
OP

@MaxxuM , don't worry, no offense taken. Just bear in mind that the side panels aren't cut nor attached in the shots showing them leaning against the stand. I don't know if that's the Frankenstein-ish you're talking about... maybe not, maybe it's all the metal nuts and bolts.
Last edited: Aug 3, 2020
OP

2.5 months in, 4 young fish that are well established.

2 frags went in and the lights went on 2 days ago.

Still need to cut those side panels on the stand... 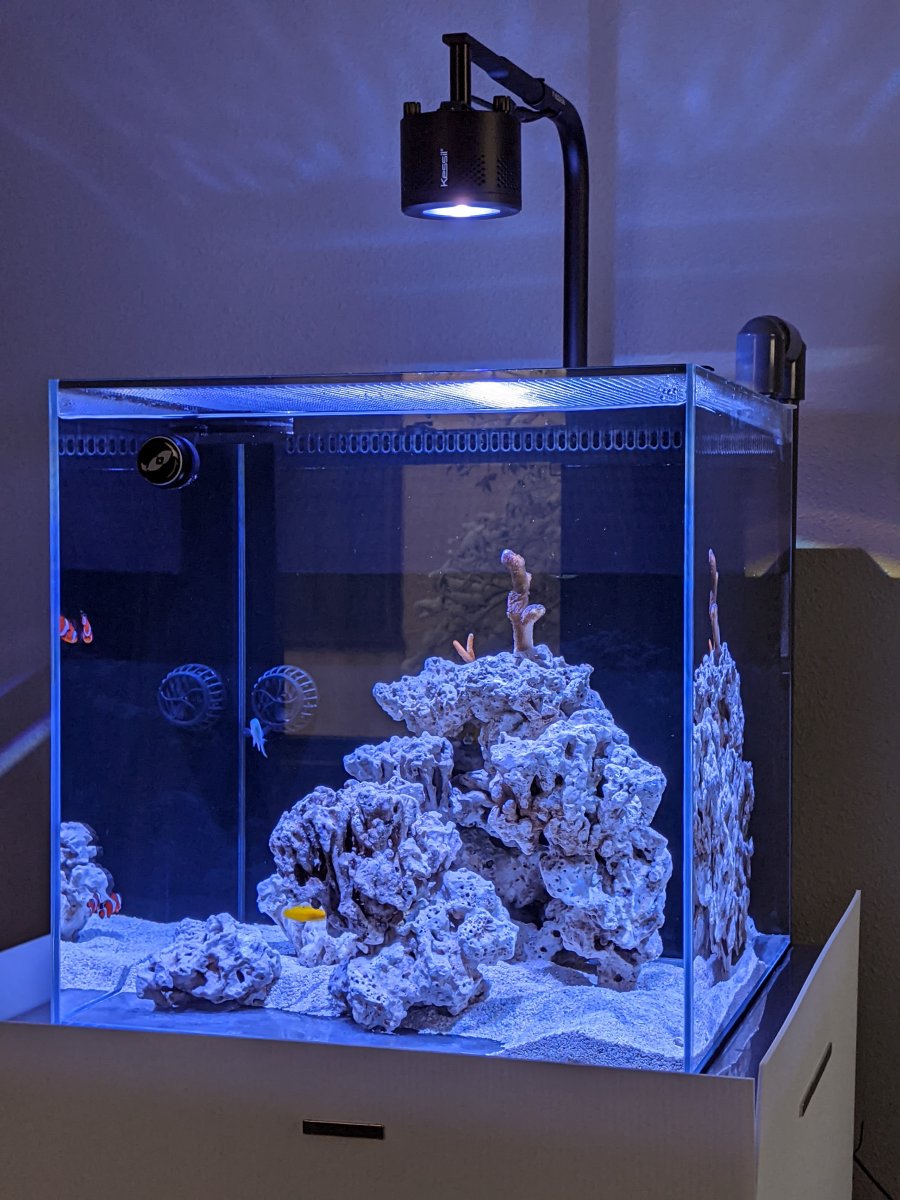 Take a new pic once that elegance is looking good! Awesome scape and beautiful rocks you got there.

Elegance has returned to normal, yay!

So, going thru some uglies. Algae. Some cloudy water. Phosphate and Nitrate test at 0, which is also concerning, but maybe because the nitrate is getting immediately pulled out by the algae, I can't tell. Phosphate has been zero for months.

I fed Reef Roids a few days ago, to try to avoid bleaching and get a non-zero for those elements.

Got 5 snails in there.

Obviously have put some (mostly) cheap corals in, all are growing:
I'm dosing Tropic Marin Carbo-Calcium after getting my levels up (8.5 Alk, 430 Calc, 1280 Mg). At this point I just add the minimal dose which maintains levels. Got Black Friday "deal" on a Kamoer X1 Pro Wifi dosing pump, going to hook that up over the long Thanksgiving weekend, covid raging, not much else to do.

Sadly, this weekend, I lost a clown. He was a favorite as he was the life of the party in the tank, had a lot of personality. He flopped out in the middle of the night in the corner by the return line where I could not put the cover (1.5" square area). Trying to find something permanent for that spot now, and temporarily covering in the meantime. I'm kicking myself for not seeing that coming, though they went for 2.5+ months without ever showing any interest in jumping out AFAICT. Indeed, my fish seem to be doing terrific, but I'm 3 for 5 now, and that is frustrating and a bit traumatizing. I don't want to lose another fish anytime soon (presumably over the course of many years, they age out, etc.- just want stability now for as long as possible). A very ill tempered Royal Gramma was injured as I was removing it from the DT, that Gramma was repeatedly trying to kill the Yellow Coris Wrasse. The Gramma would get the wrasse's entire head in its mouth and start thrashing, etc. The wrasse couldn't get more than 1.5" off the sand without the Gramma charging it, no matter where in the tank the wrasse was. It seemed to have nothing to do with territory and the Gramma left all the other fish alone. The Gramma even charged the wrasse initially when the wrasse was in the acclimation bag floating at the top of the tank. And now lost the clown, despite my best efforts to prevent a fish from jumping!

I do want another fish, wrestling with what to get. I don't think I'll try to find a mate for the remaining clown. I'd love some sort of purple / lavender dottyback, but fearful of aggression.

It's a very peaceful tank ever since I got the Gramma out. There's minor aggression now and then, but less and less over time as the fish seem like one big family in there. Clowns, yellow coris wrasse, and chromis. 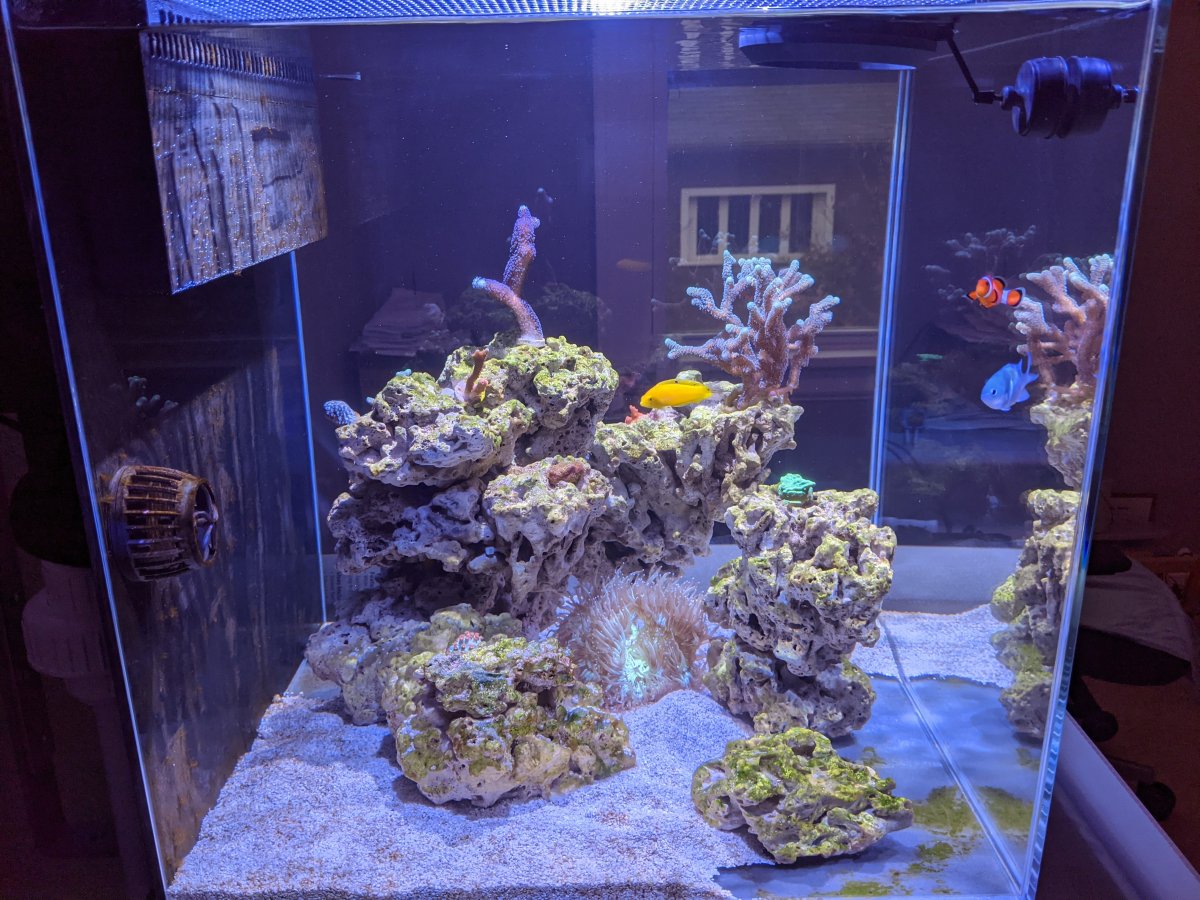 A week ago the uglies were even uglier: 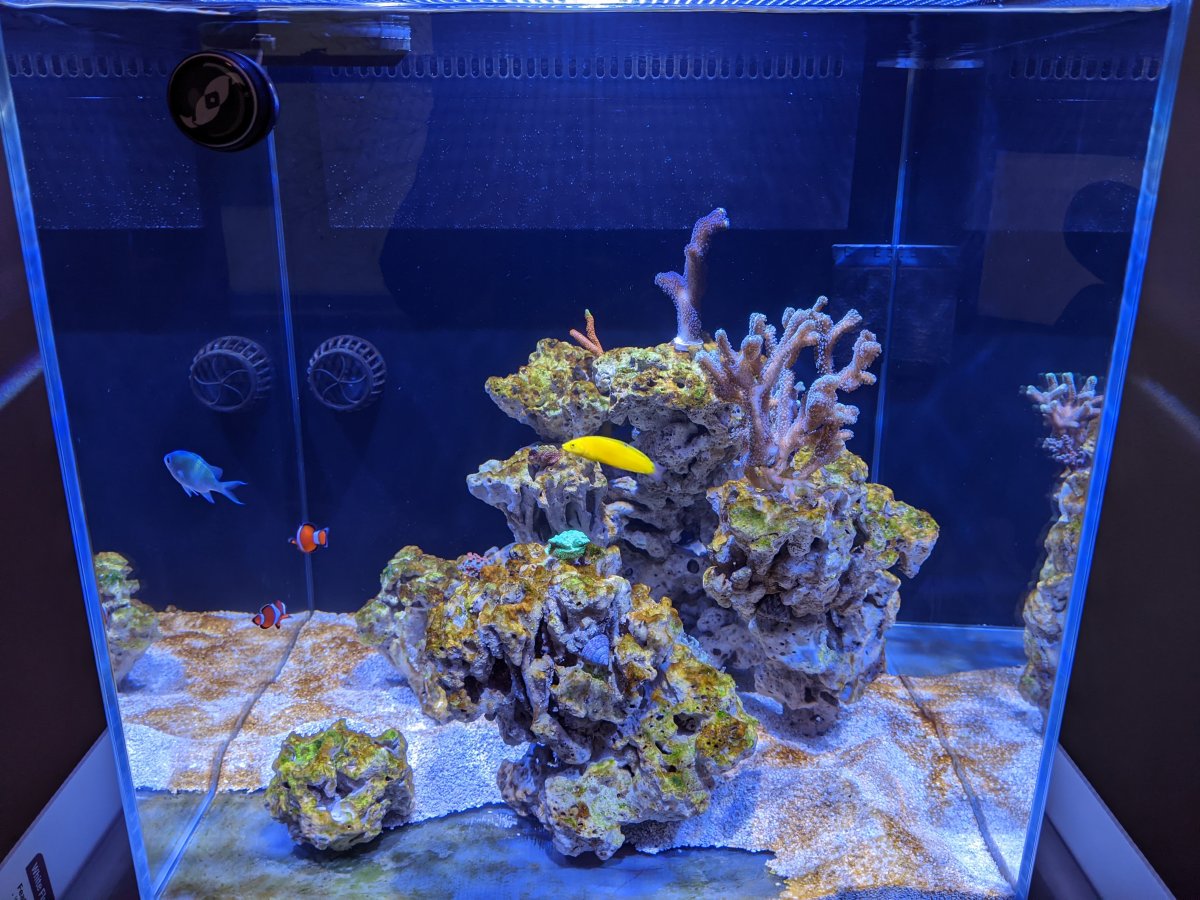 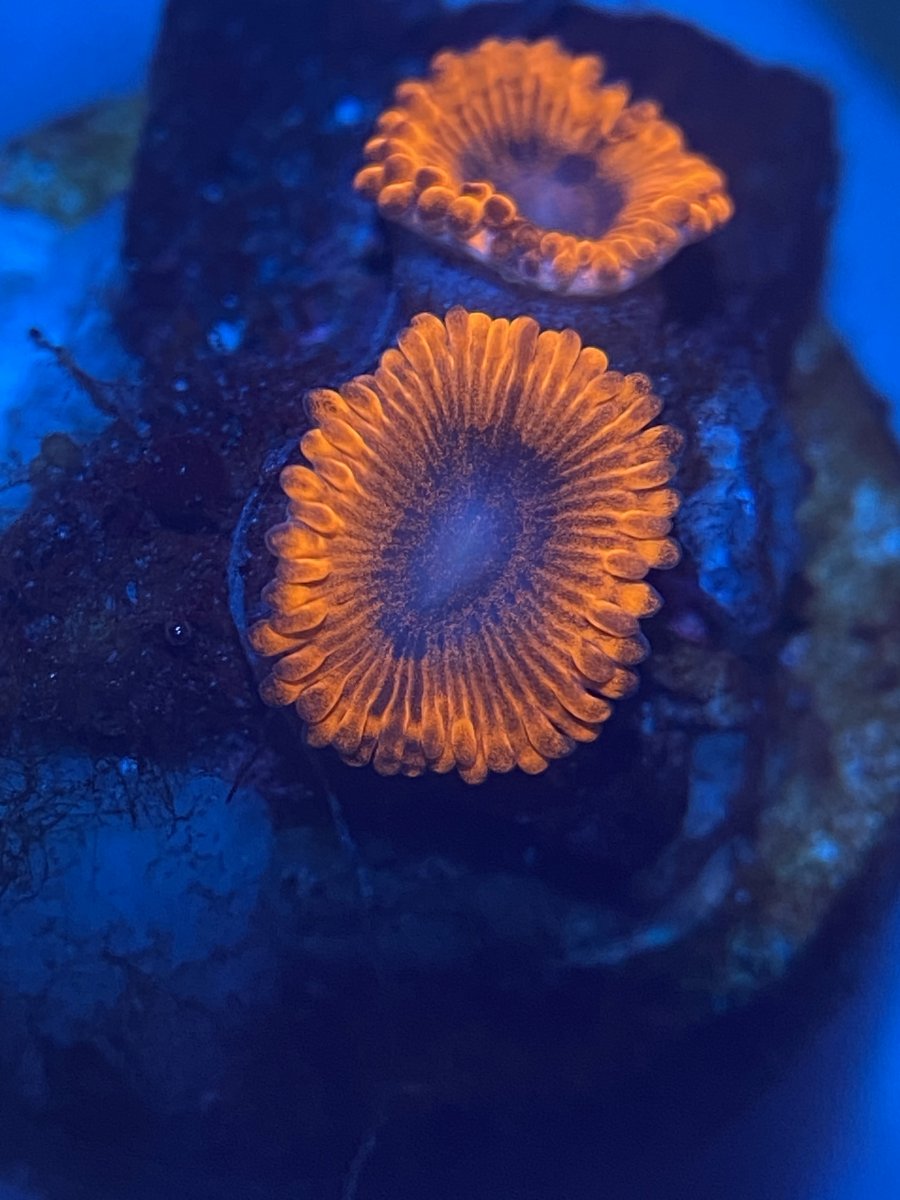 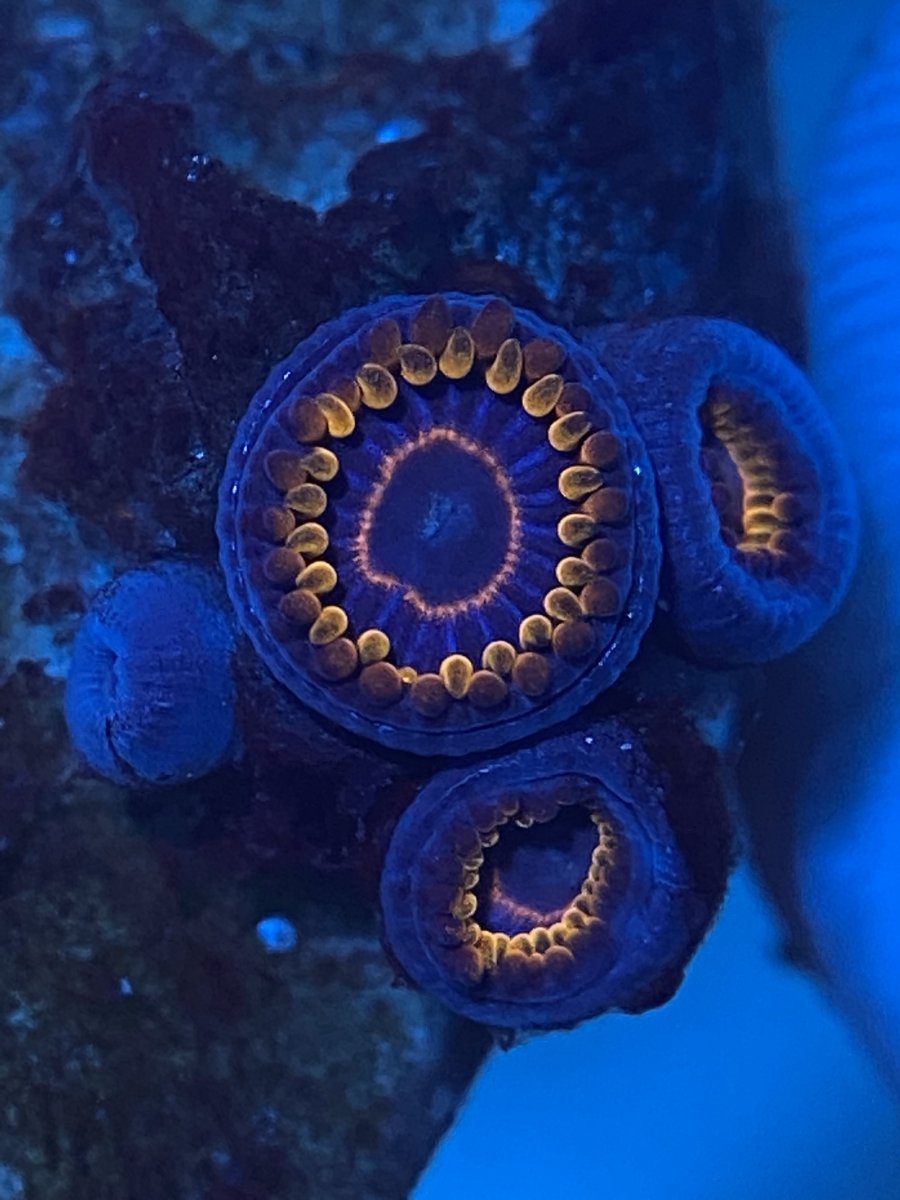 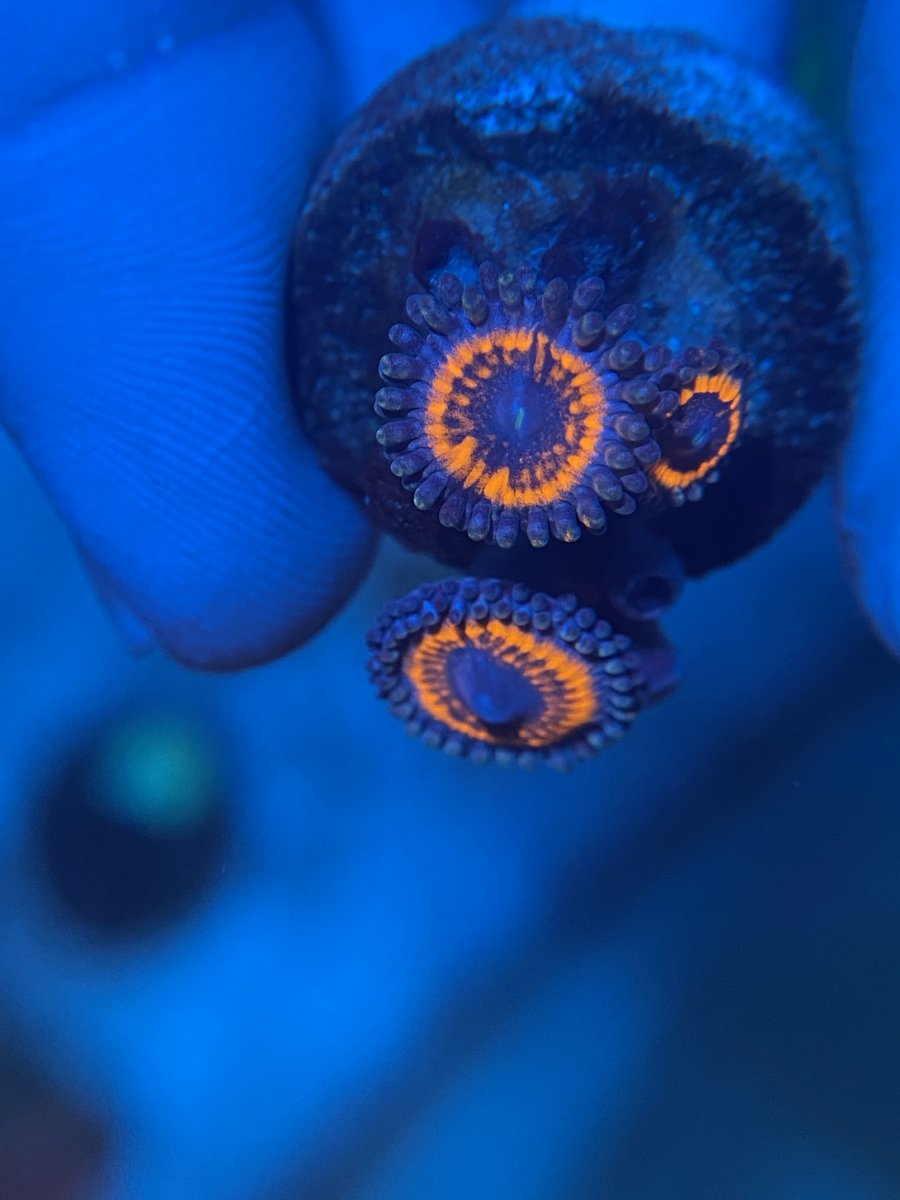 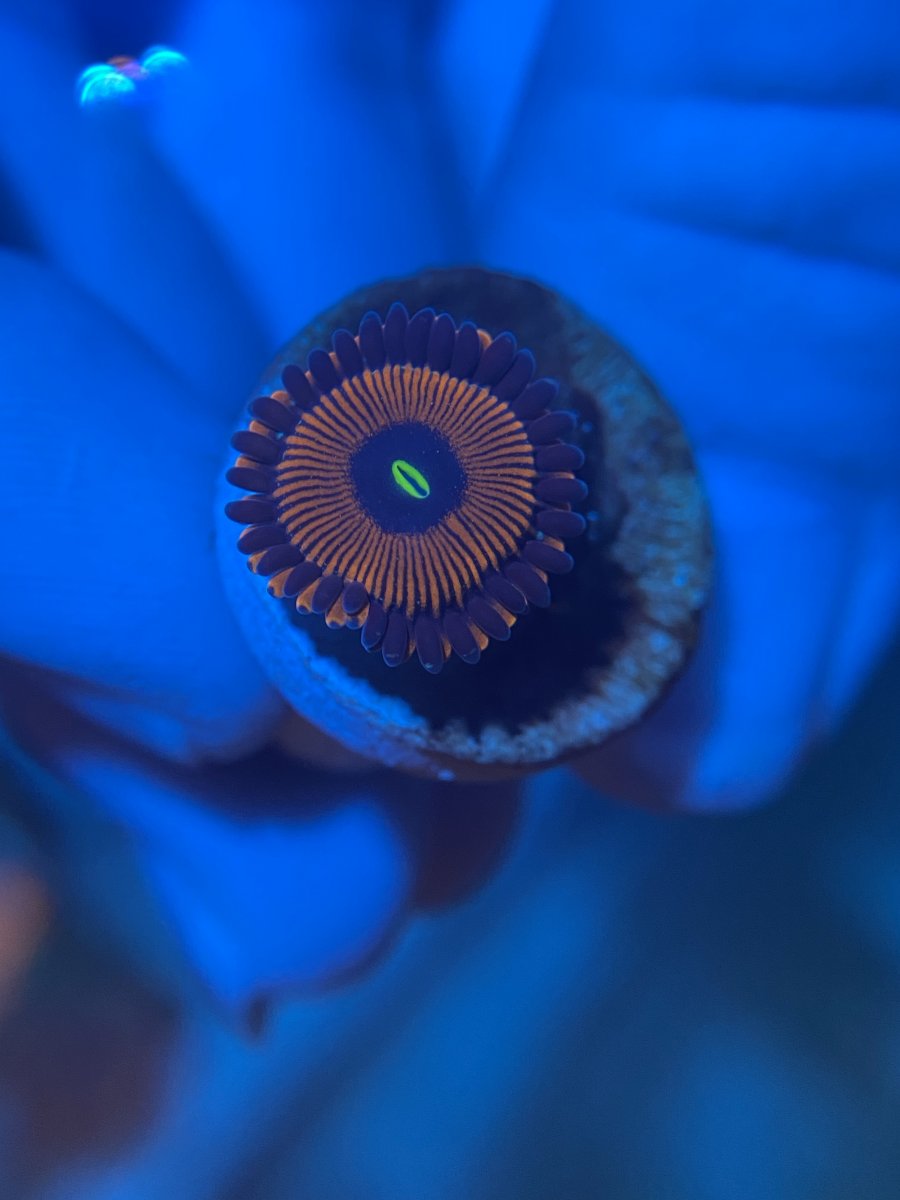 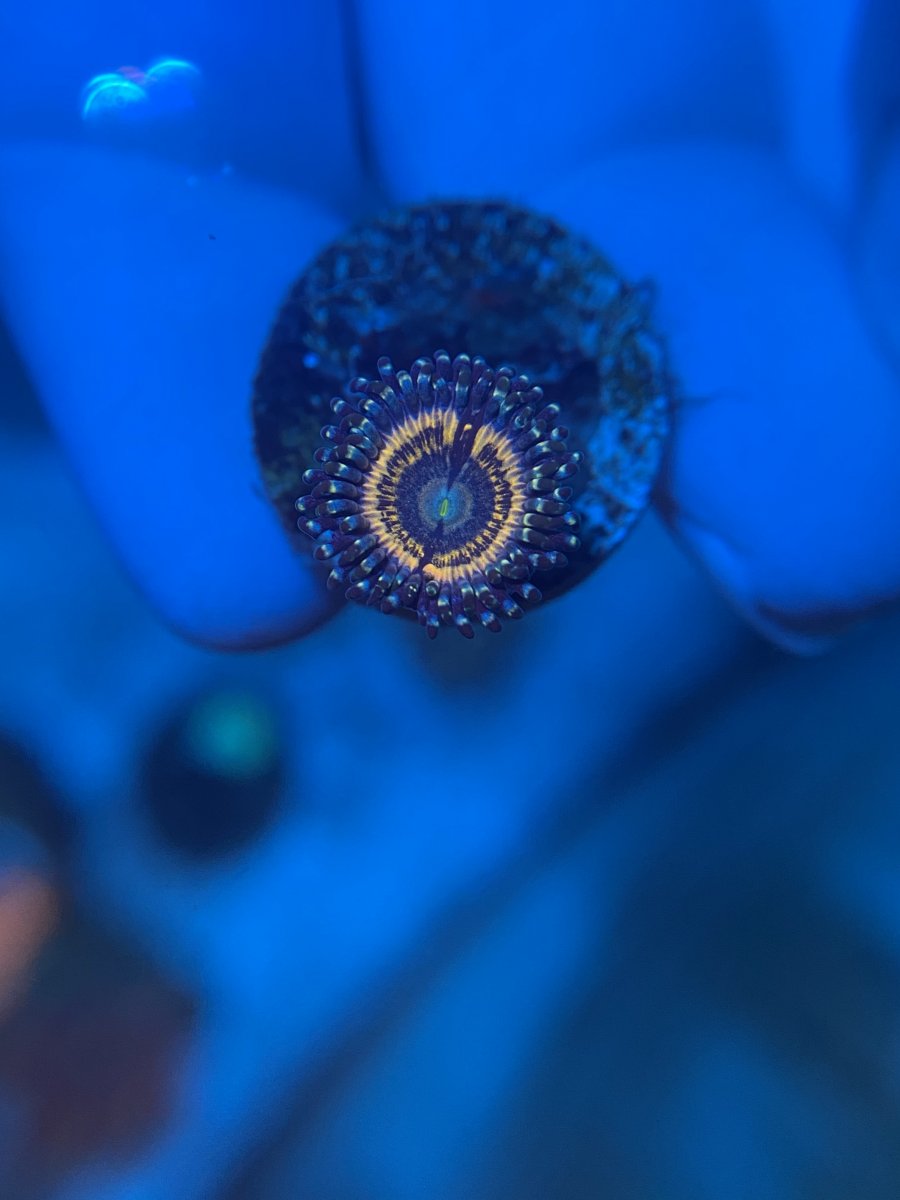 oo that reminds me of dragon stone from freshwater. you found some super cool rocks and that stylo is going nuts

Uglies are the "fun" stage

GHA has been even more fun than the uglies... I got a Tuxedo Urchin for it, and if I could kiss it, I would! He's an algae eating rock star.

I'll have to post some new pics, including of the doser and coral growth. Umm.... along with the GHA.

I have a new tank as well, the 20G long, will have to post that.

Keep updating the the thread we will check back. If you ever need anything you can always ask us