Hey everyone first time posting here. My tank has been up and running for about a year now and it has been a great ride with a steep learning curve. My wife and I previously had a 35 gallon freshwater tank that we maintained very poorly and stocked from petsmart. Maintenance was basically wait until the water is green, drain the whole thing and fillet back up with tap water and Prime. When ich wiped out all of our fish we decided to go a different route. The tank we went with is an Aqueoun 55 gallon reef ready corner flow with a 20 long sump I had glass baffles made for and a wooden stand I built out of a 2x4 base. 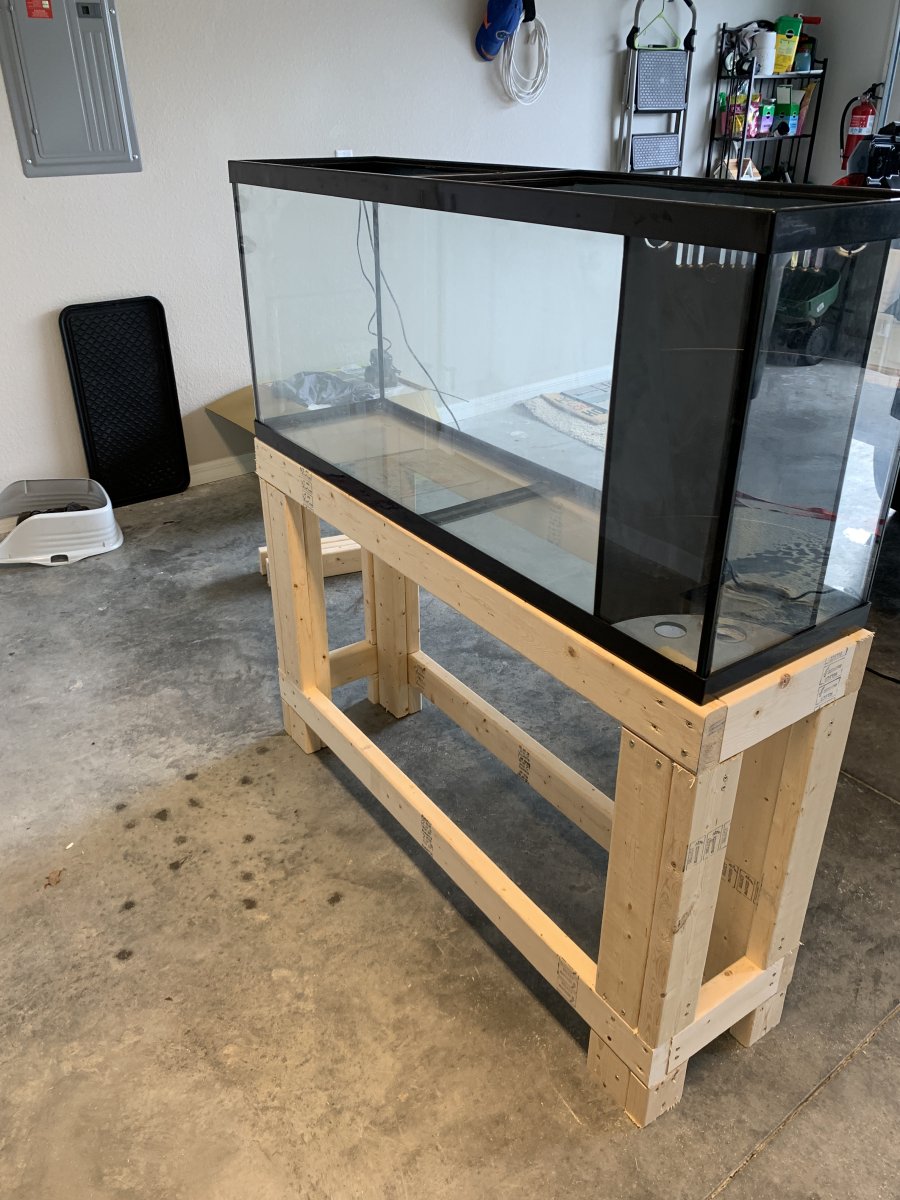 Initial framing, I'm a cautious guy so I went with 2x4. Ridiculously heavy, but extremely sturdy. 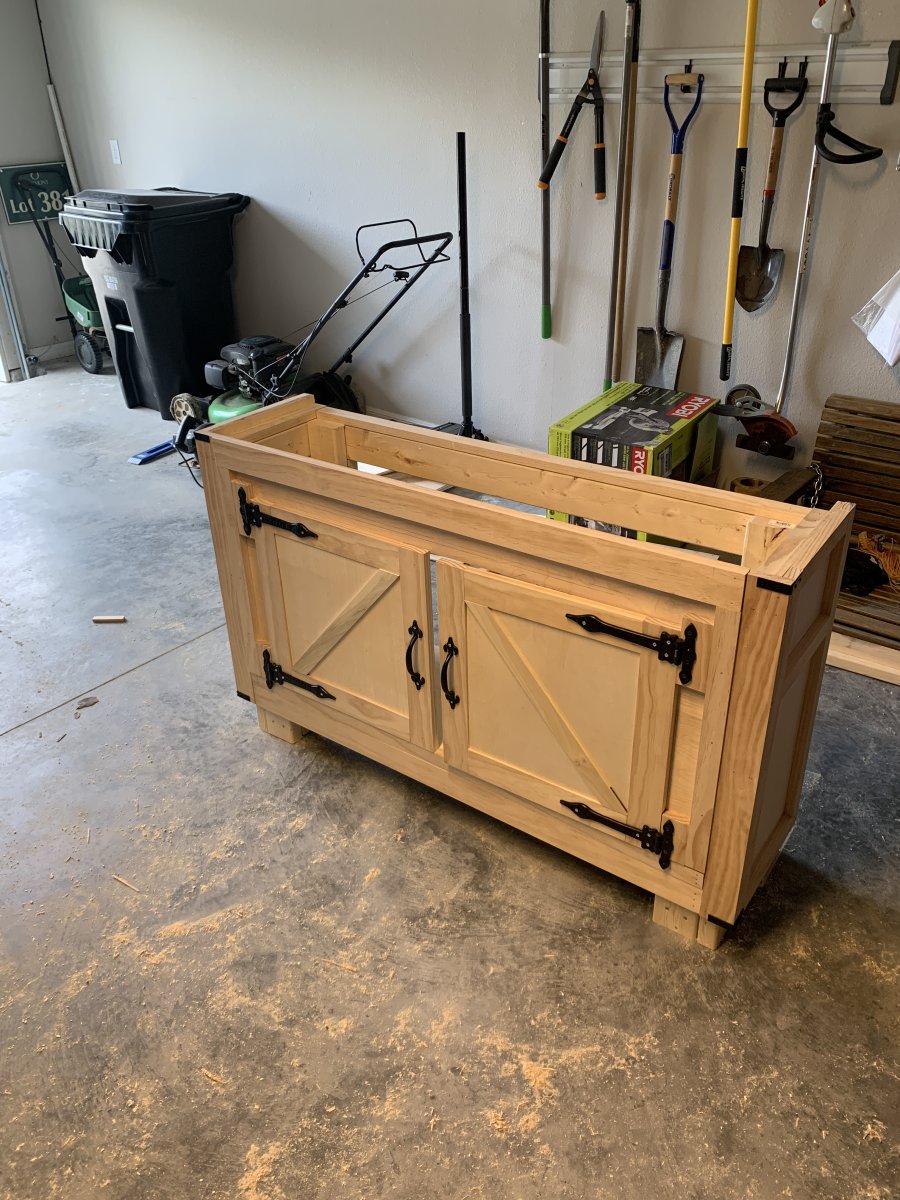 With the decorative bits on. Our house is a bit of a farmhouse theme so this was mandatory. 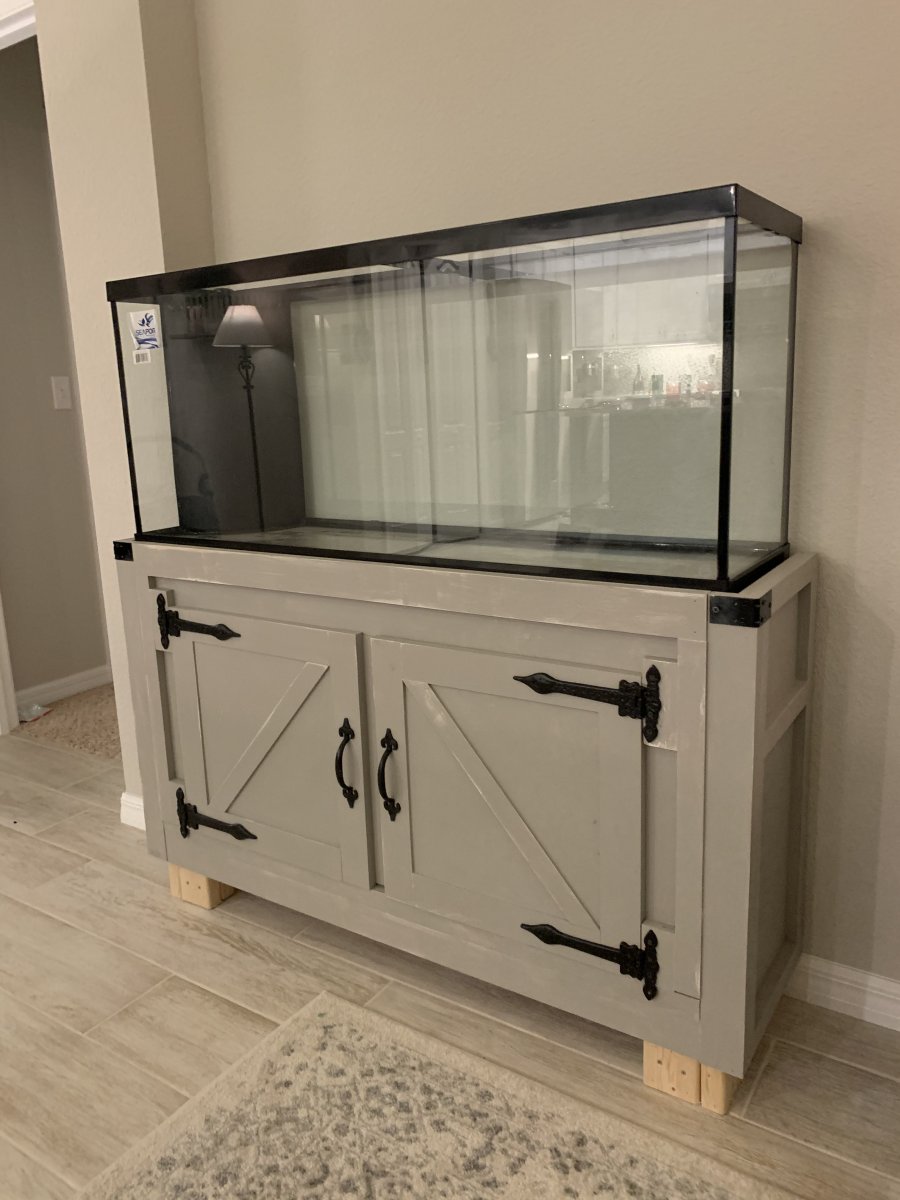 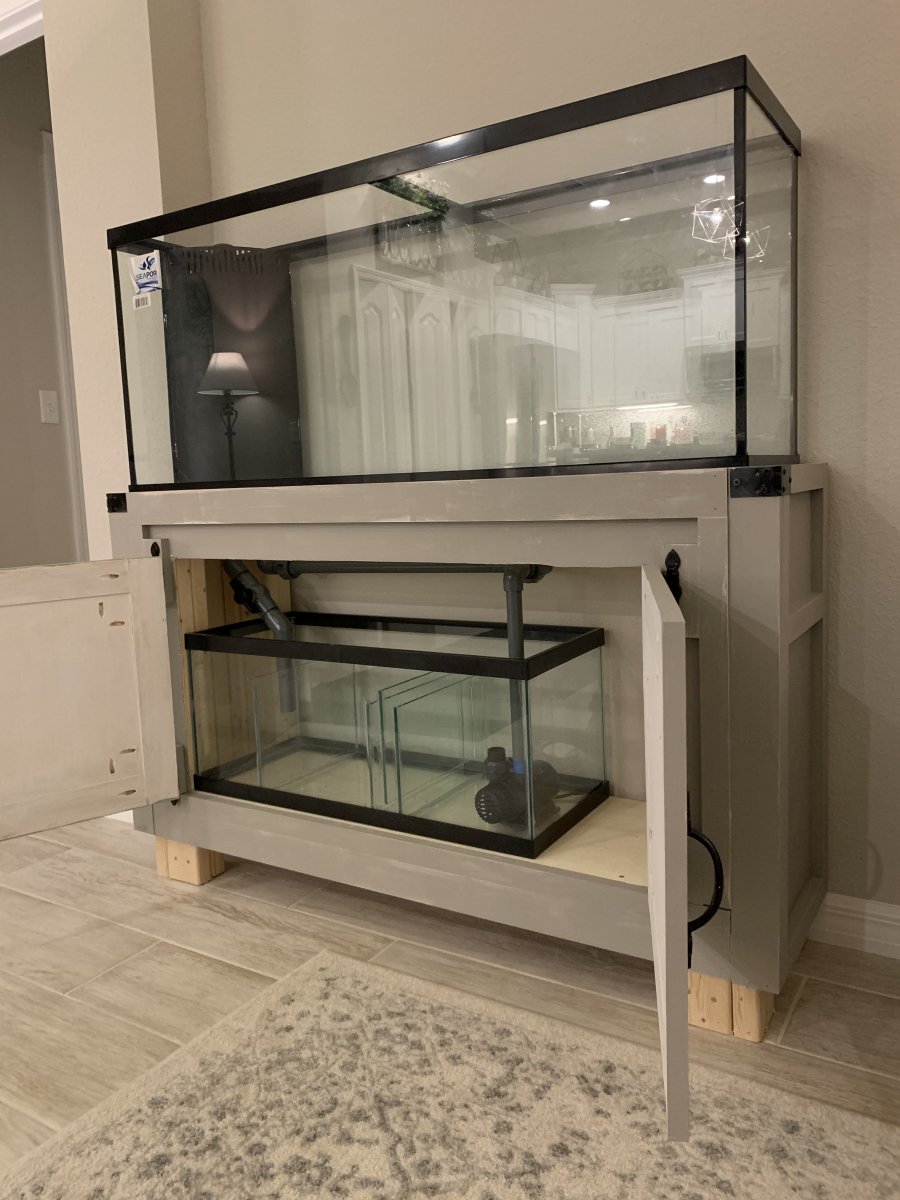 Initial plumbing design. The tank came drilled on the floor with a 1" and 3/4" hole designed for a standpipe or durst setup and the return plumbed through the overflow. After filling the tank and seeing how loud this design was and the tank being in our living room, I had to make changes which will be seen in the follow up photos. Long story short, I converted to a Herbie drain and ran the return plumbing up the back and over into the overflow so it would remain hidden. 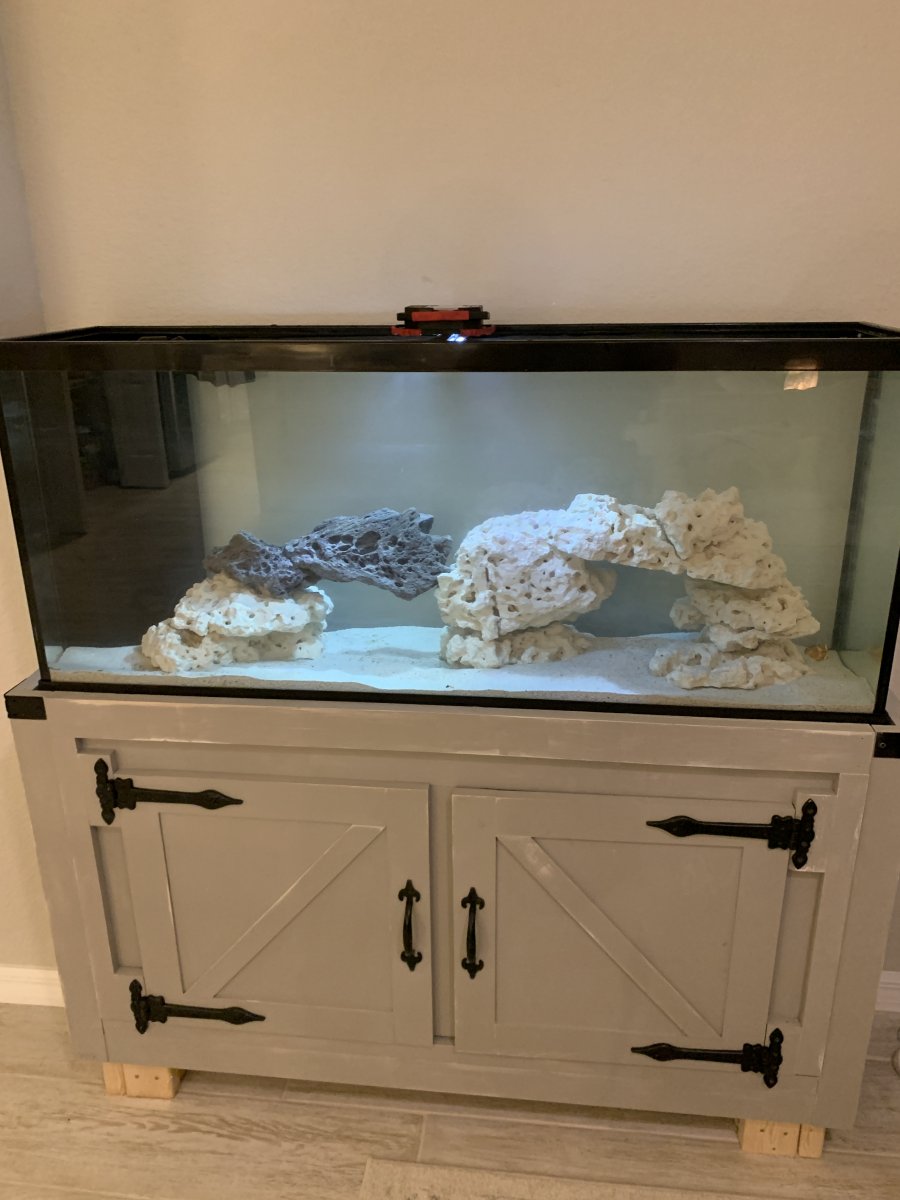 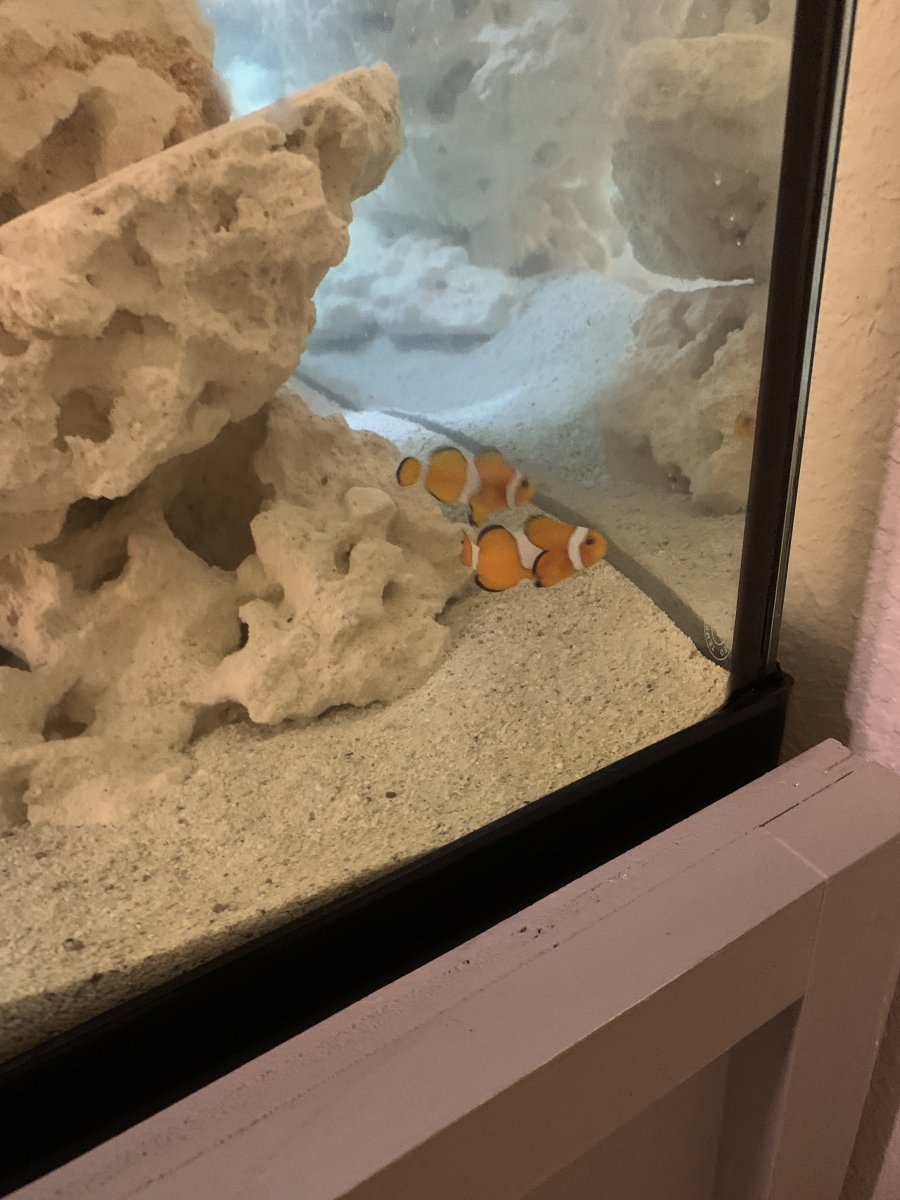 After filling from our RODI (koolermax brand, should have gone with BRS...oh well) adding live sand, and running for a couple of weeks we added our first inhabitants.

Fast forward through the next 10 months, I let the tank finish it's fish only cycle without lights like BRS recommends in their setup videos, and honestly it worked very well. The tank has gone through various stages of "fuzziness", but no full blown algae blooms thankfully. I did a lot of research on lights and flow and ended up going with 2 Red Sea ReefLED 50's and a Reefwave 25 on the end of the tank opposite the return. Currently, my return pump is a Jebao DCP 3500 and sump turnover is about 3x display volume. When I added the lights I did have to build a canopy for 2 reasons: one, the light spill into our living room was unbearable (55 gallon tanks are only 12" deep), and two, the mounts from Red Sea clearly were not made for such a narrow tank and wouldn't center the light properly. 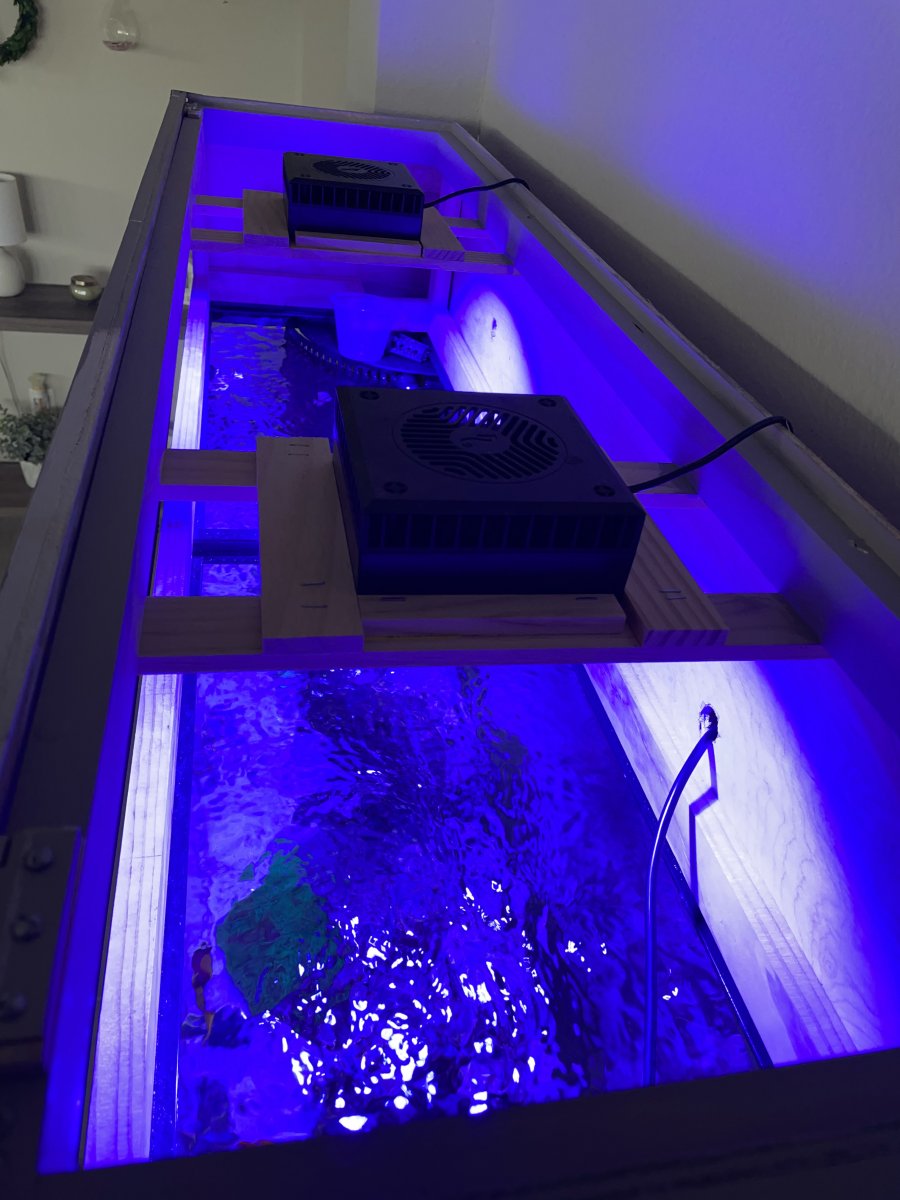 My solution; I built the canopy to hold these lights exactly 7" from the water surface as recommended by Red Sea, with an open top for air circulation. 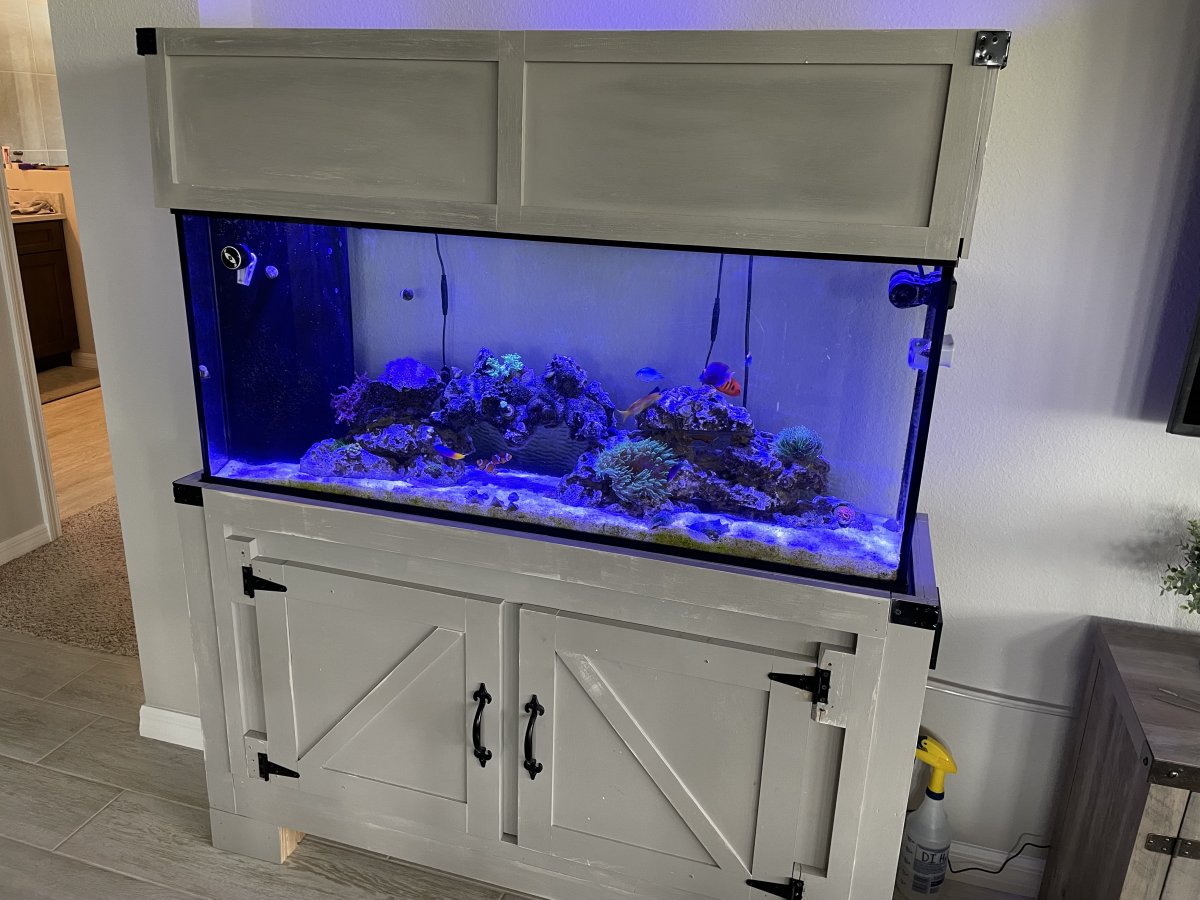 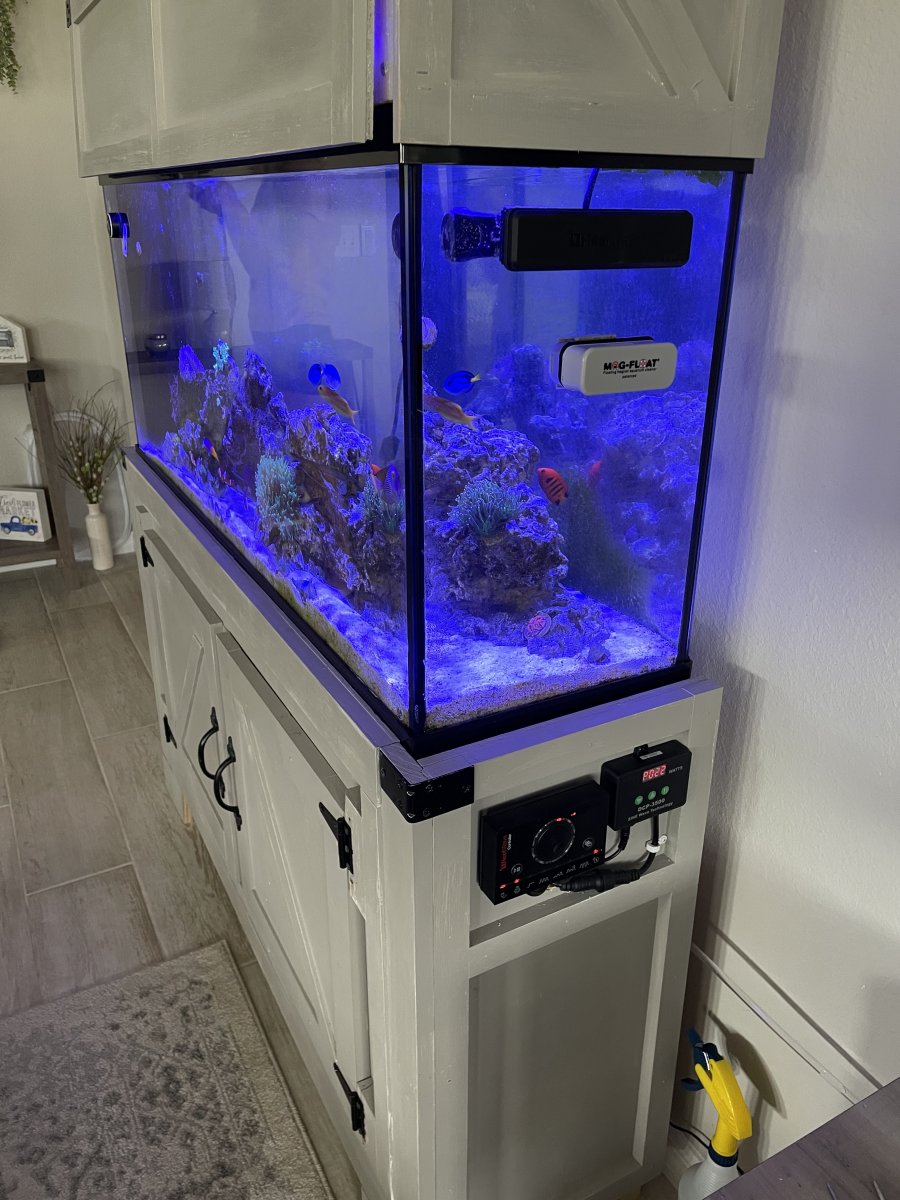 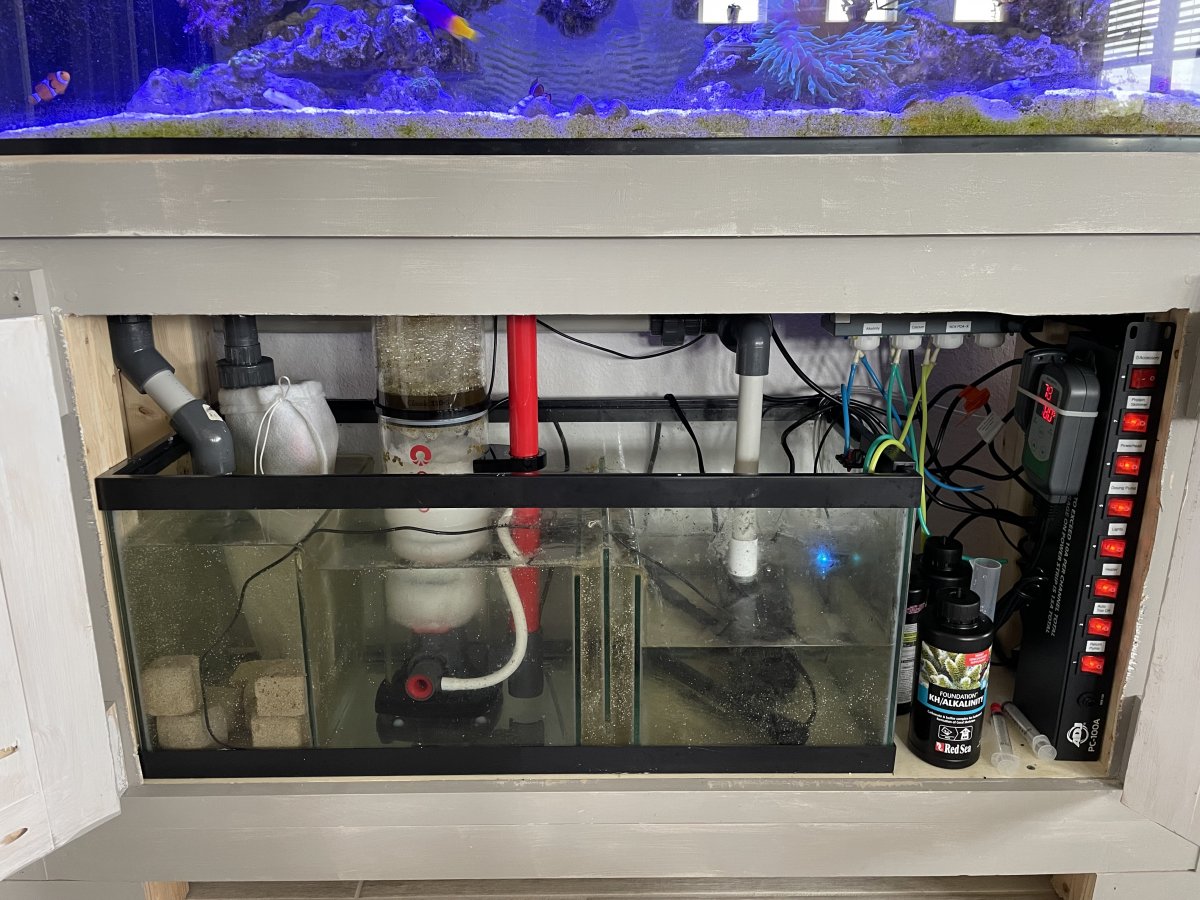 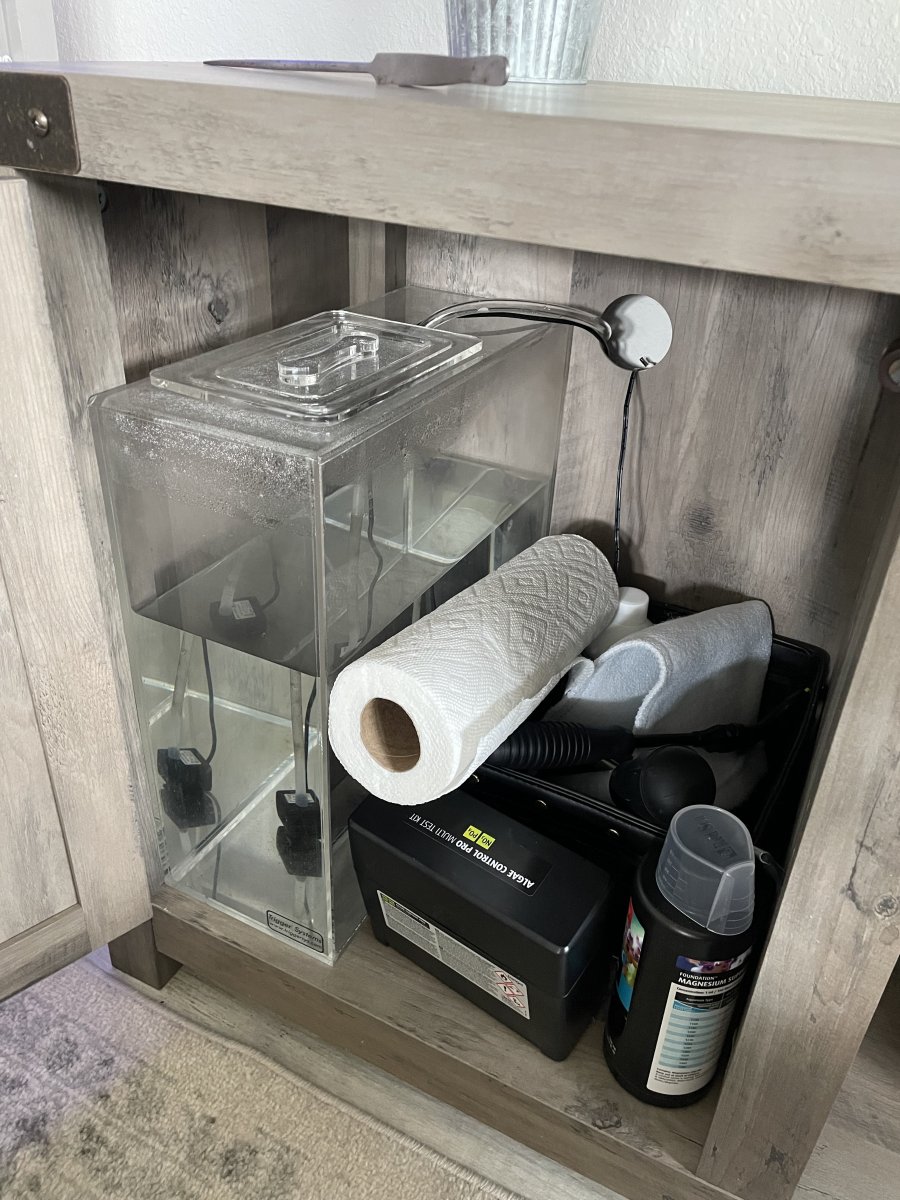 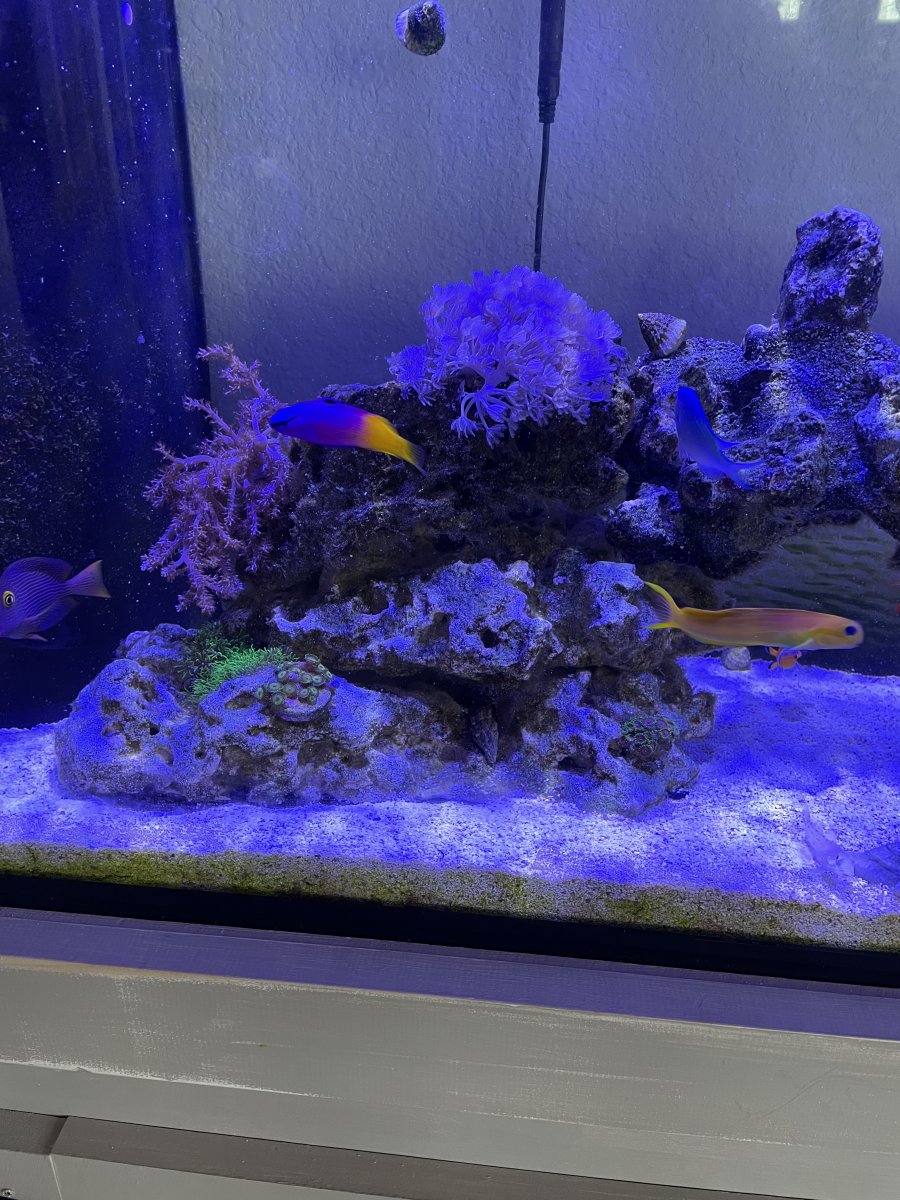 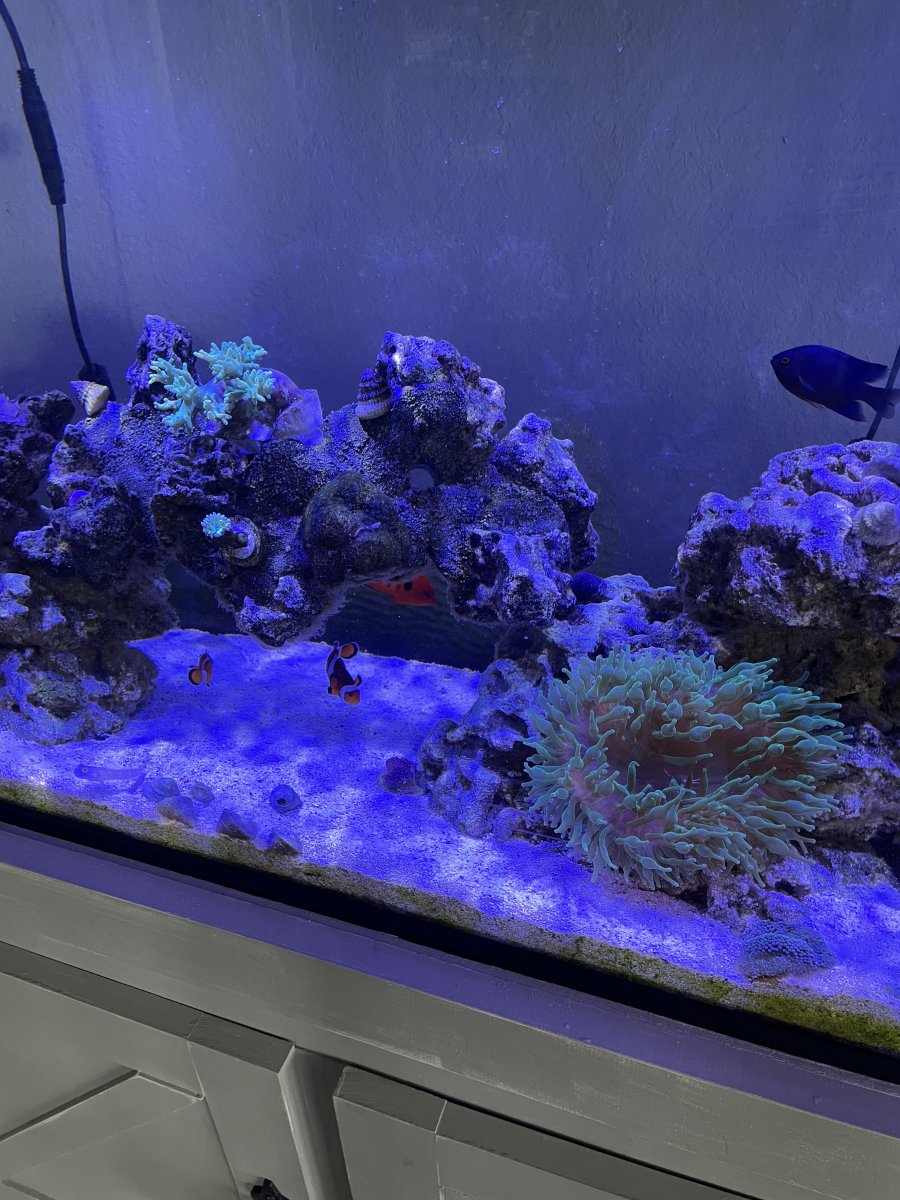 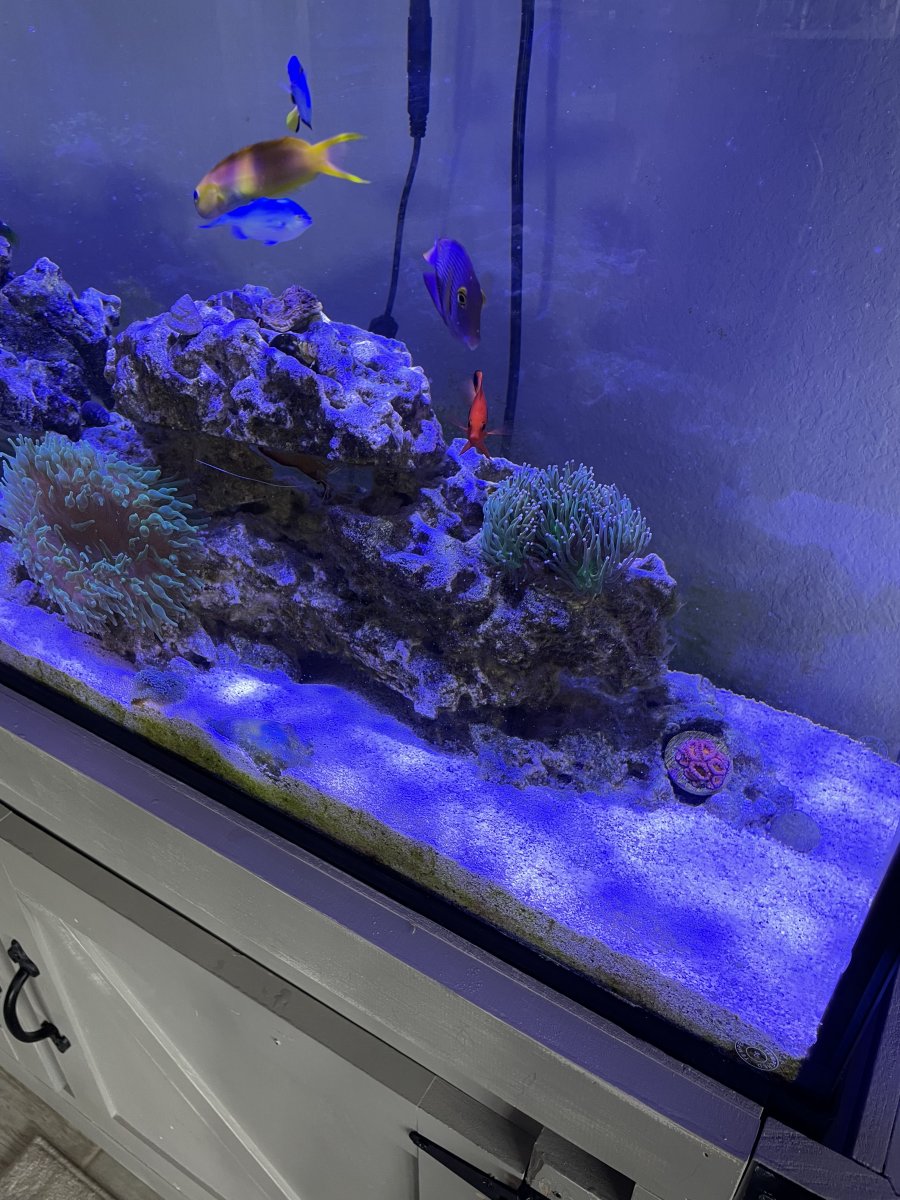 Recently, I made the decision to rent an Apogee. In hindsight, I should have done this much sooner. My reefLEDs were set for 12 hours of light with a 1 hour ramp up/down followed by an hour of moonlight. Intensity was about 65% blues and 30% whites. PAR readings were about 60 on the sandbed and not even 150 on the tops of the rocks. I should have known with the wattage of these lights that they wouldn't need to be dialed back much if at all. And yes, ideally a third light in the middle would be needed to cover a 48" tank. The middle bracing made that impossible to look at. Plus, I'm in CRNa school in the moment and don't care much to try SPS for a few years. That being said, I cranked the lights up using the manual mode on reef beat and took new measurements. On 100% blues and 40% whites: Average 100 PAR at the sand and 175 at the tops of the rocks, exactly what I was looking for from the beginning. Growth has been far from ideal in the last 8 months or so and I'm hoping this helps. That and I've been using No4Po4X for nutrient control and added a Reef Octopus classic 110sss. I'll be following the recipe wizard from Red Sea.

Lighting changes after measuring with Apogee.

Again this is my first build and all things considered I've been pretty satisfied and there has been lots of great advice on here. Sorry if the post is a little scattered too haha.

Current livestock:
-2 clowns
-Midas Blenny
-Yellow eyed Kole Tang
-Flame Angel
-Neon Damsel (he's a jerk)
-1 blue/green chromi (started as a school of 6 and they slowly killed the weakest one off until only this one was left)
-Royal gramma
-Diamond Goby (keeps the sand spotless!)
-Lawnmower blenny
-small blue hippo tang (will have to re-home of course)

Corals:
-green BTA
-A few zoas
-kenya tree
-xenia
-cap monti (impulse, it was cheap and I was curious. It was green but rapidly lost all color. I thought it might have been excess nutrients at first, but now I'm sure very low light had something to do with it as well)
-Ricordea
-Singularia leather
-Duncan (1 head, hasn't grown in the 6 months I've had it
-Aussie red (pink) Acan

Various snails and hermit crabs as well, and I aint counting them.

Also, I got tired of lugging 5 gallon buckets in and out of the sink because our RODI was under the kitchen island, so I loved the whole setup to the garage closet and ran the tubing straight through the wall to the laundry room behind for water and drain access. 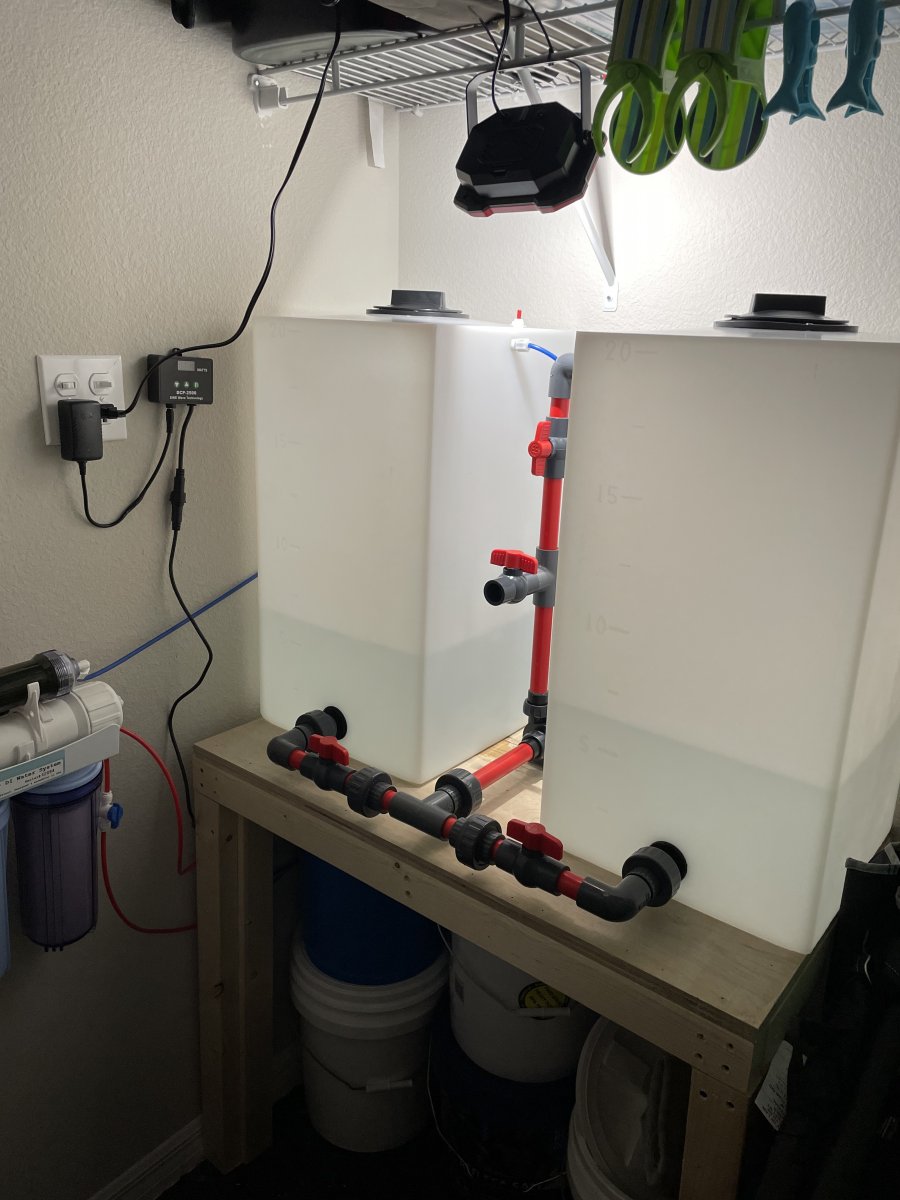 Two 20-gallon containers and a cheap Jebao. Soooooo much better than 5 gallons at a time in the kitchen.