Really, ohh ... Hmmmm... Thank you for pointing out my ignorance. Yes, my old one is indeed 2 channel. Too much info for my old brain apparently. Darn it- finally decided to just do the cheapo Chinese box. Now I will have to reevaluate. Leaning toward two V2+ 24 fixtures to cover my 150. That way if I end up down sizing I have a useful light or if one has an issue - I only have to cover 1/2 the tank.

Well the friend that lent me her SB original Basic light fixture had 2 more - both unopened and they sold them to me for a good price. So, here is the plan: one SB basic fixture on each side of the Reefbreeder 24 fixture I currently have - I will orient the SB basics from front to back, then Reefbreeder 24 in the middle of the tank oriented normally ( side to side). Then, I will place one 24" T5 blue bulb in front and 1 behind of the Reefbreeder fixture to help with shadowing and overall color of the tank lights. I may pick up a new Reefbreeder 24 V2+ to replace my old Reefbreeder. I will put up some Par values with this lighting scheme to see if that is necessary or not.
Timing: Ramping up the blue Reefbreeder channel starting at 8AM ( 1 hour ramp up) , 9 AM T5's come on and the White Reefbreeder channel lights starts ramping up ( 1 hour ramp up) , 10 AM both SB blue channels turn on, 11 AM both SB white channels turn on. So - from 11AM till 6PM all lights are o 7 hour coral growth period. At 6 PM T5's turn off, at 6:30 Reefbreeder White's begin to ramp down ( 90 minute ramp down) , 7 pm white SB channel turns off, 7:30 SB blue channels turns off and Reefbreeder blue channel begins to ramp down ( 2 hour ramp down) so by 7:30 the only lights that are on is about 33% of the Reefbreeder white channel and 100% of the Reefbreeder blue and by 8 pm only Reefbreeder blue at about 33% , 9 pm on lights are off except a 10% Reefbreeder blue channel as a moon light. I obviously need to buy a few more timers. LOL
I really like the way the tank looks with just blue lights for 30 - 45 minutes at the end of the day- the corals and fish really "pop". I know its an unrealistic look - but it also shows if a coral is not doing well = no "pop".
Update on the PO4 situation - after 24 hours of using my Dual BRS reactor with both sides loaded with new GFO - my PO4 went from .25 to .09 = yeah. Do not really know how it got so high to begin with. A bit of slacking on water changes and not changing the GFO as regularly as I thought, I suspect. Of course not tresting for nearly 2 months during my light crisis may be part of it - Ohh Ya.
OP 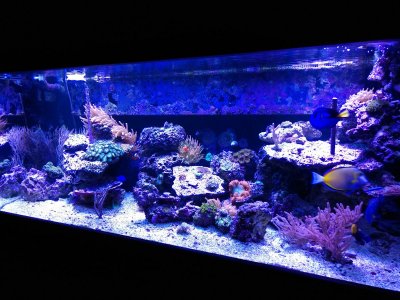 Well, I picked up a few Monty and Challice frags at the black friday sale at the Reef Gallery to see if I can get anything to grow in my tank these days other than BTA's and Zoa's and Gorgonians wiht the new lights. I am terrible at rememebring names corals- but I know the Superman monty, RaJa Rampage challice, but forget the names of the other frags I got. Super sale - thanks Reef Gallery!

My PO4 may go through the roof after just one week of feeding and the GFO completely exhausted.
I test for PO4 weekly. Use 2-3 cups of regular GFO and replace it relatively frequently. Before a more intensive vinegar dosing schedule, relying primarily on my tiny fuge for nutrient export, I'd have to replace 2 cups of regular GFO every 10 days to keep PO4 under .05. Now, on a more aggressive vinegar dosing schedule, I replace the GFO every 4-6 weeks based on test results. Still testing every week though. My tank is half your size...
OP

Thank you - I have been looking for any advice and or a schedule on how often GFO needs to be changed. Yes, my tank is large ( 150 gallons) - but I also have a large Fuge with almost 1/3 of a 75 gallon tank filled with Cheato ( which I am planning are thinning this week - so free Cheato at the next club meeting). I think once a week I will change the GFO out for at least a month with testing every couple of days until PO4 is below .05.

Aren't you on a high capacity GFO? I've never used it, but I hear it lasts at least twice as long as the regular GFO.
OP

But i think it was in the one reactor of my Dual reactor for nearly 2 months - now that I think about - I got distracted by my lighting issue.

Same stuff I use, doesn’t last longer just strips out the po4 quicker.
I’m usually running 1/2 cup to a cup at a time in a reactor for my 400 gal system.
I run mine for 2 to 6 weeks pending on my test results. Which as u know, I test po4 twice a week and alk just about every day.

That’s pushing it a bit!
It all comes down to what ur test results are.
Ur tank looks like u have no algae prob, so why do u need to get below 0.05?
What’s ur no3? If I remember it’s pretty low.
OP

UPDATE: Lights are definitely making a difference- my one surviving SPS= a purple monti , picked up at the Cleveland swap 3-4 weeks ago, it still has PE - yeah!! Also - the frags I picked up at reef gallery are all doing well. Alex came over last week and we tested and tested by system with his tests kits for over an hour to see if we could figure something out. But his kits all agreed with mine and my parameters are pretty good - with Alk being a bit high at 9.0, NO3= between 1-2, PO4 at .08 , Ca= is around 450. He has a PAR meter as well- I will post those results this weekend as its amazing how 1-2 inches one way or the other makes a huge par difference. but there is no dought my old reefbreeder 24 is on its last legs and it was actually putting out more light/PAR than my very old Ecotech XR30 G2 converted to a G3 about 5 years ago that I recently dropped into the tank by accident. So, no doubt my prior lights were not adequite for SPS. The biggest thing he thought to check that was off was my salinity - and sure enough, it was low= 1.022. So after rummaging through my reef equipment drawers I found some pinpoint calibration solution for salinity and yep- my refractometer was off and it needed to be re-calibrated. Lesson learned!! It took about 10 days of doing no water changes and adding salt to my top off reservoir to get my salinity up to 1.026 again. So , things are looking up - it looks like my lighting was a major issue for SPS as well as some low salinity affecting some of the more sensitive corals. Maybe by the LEAR swap I will be confident about picking up some higher level corals again.
OP

Some pics from tank today. Things are looking well. No losses and getting some growth from Monti's and my purple Digi. 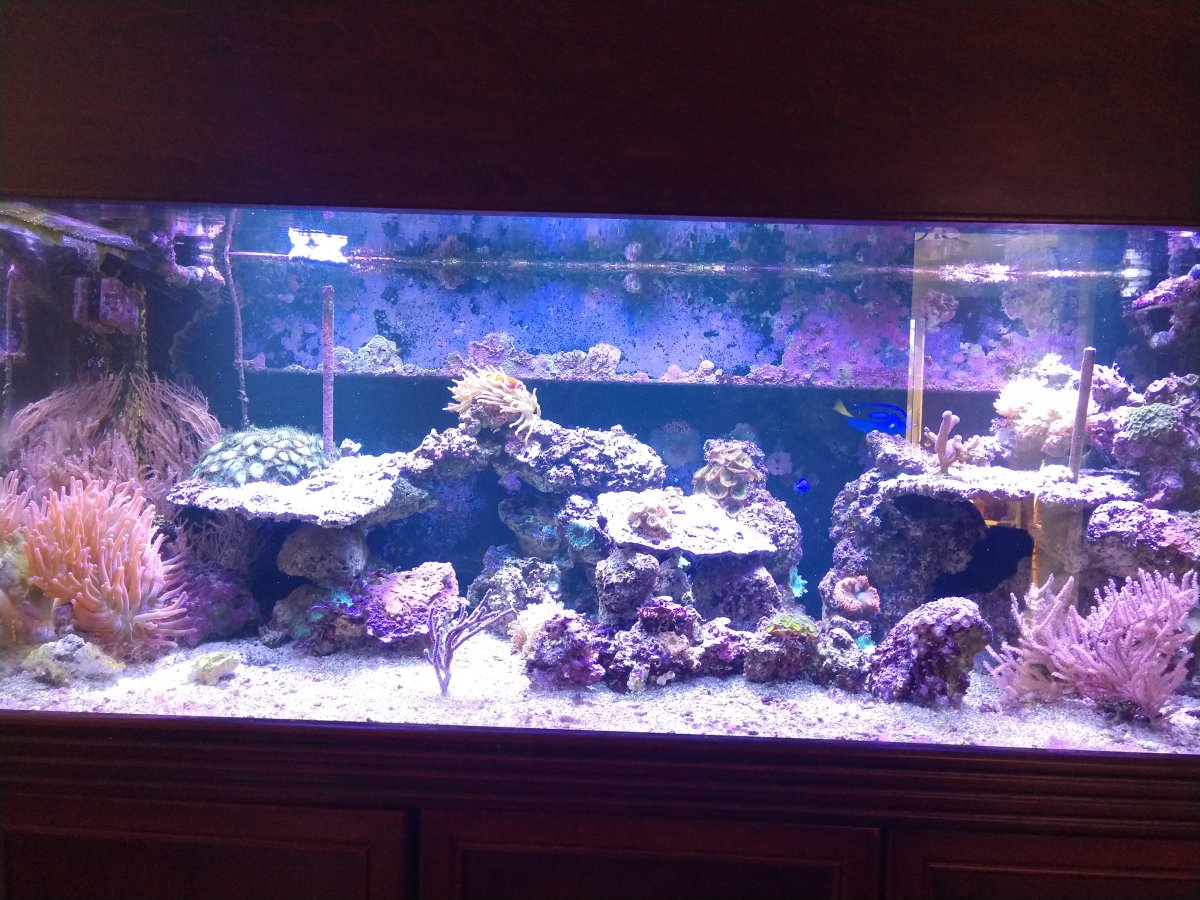 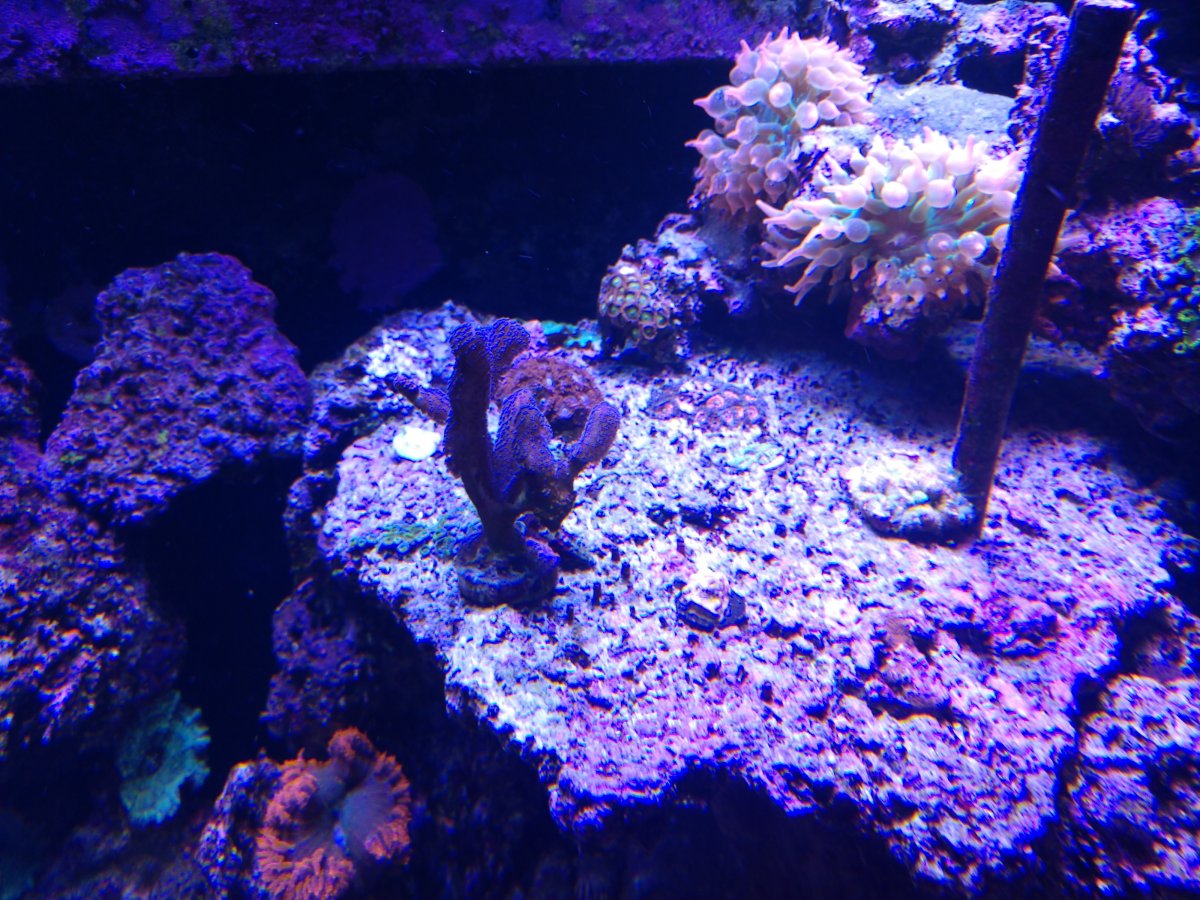 A few more, best my phone ( older Droid) can do. 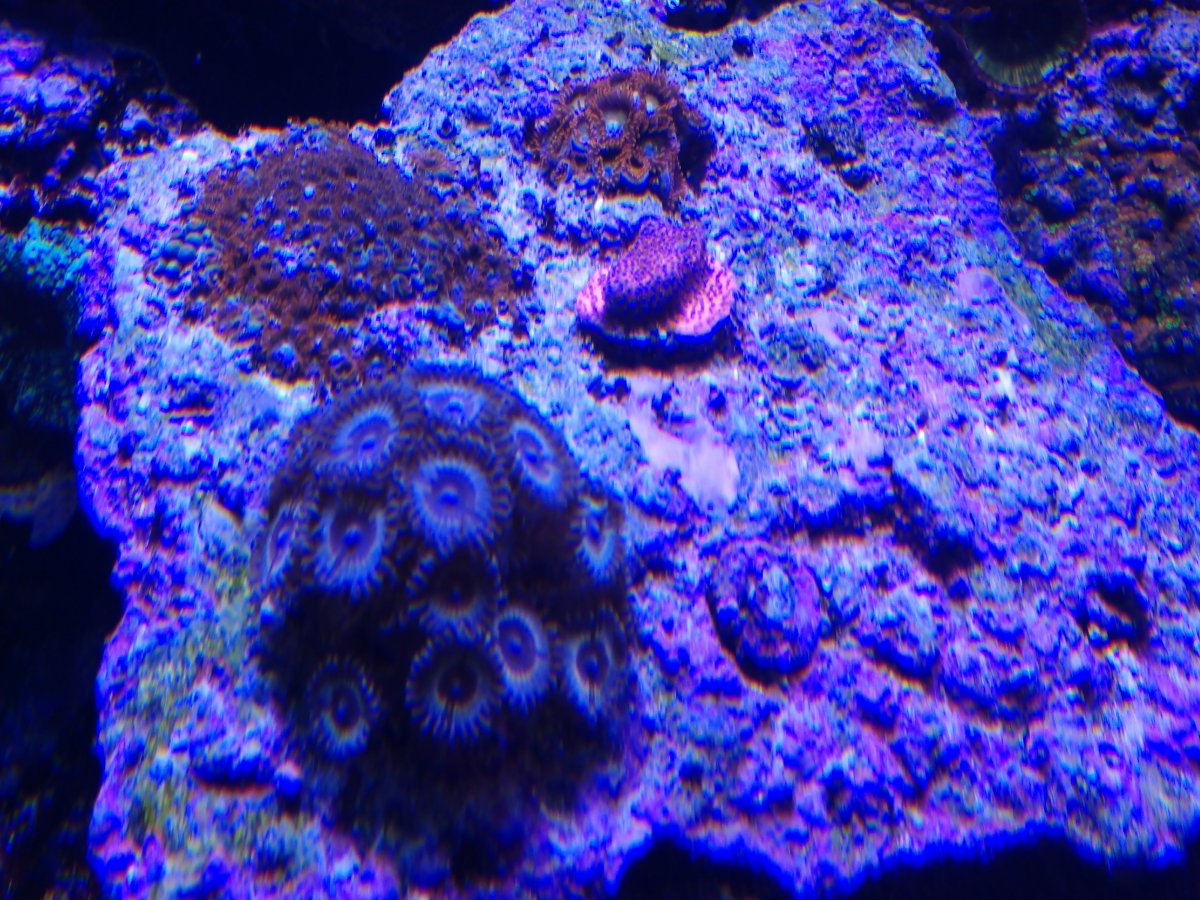 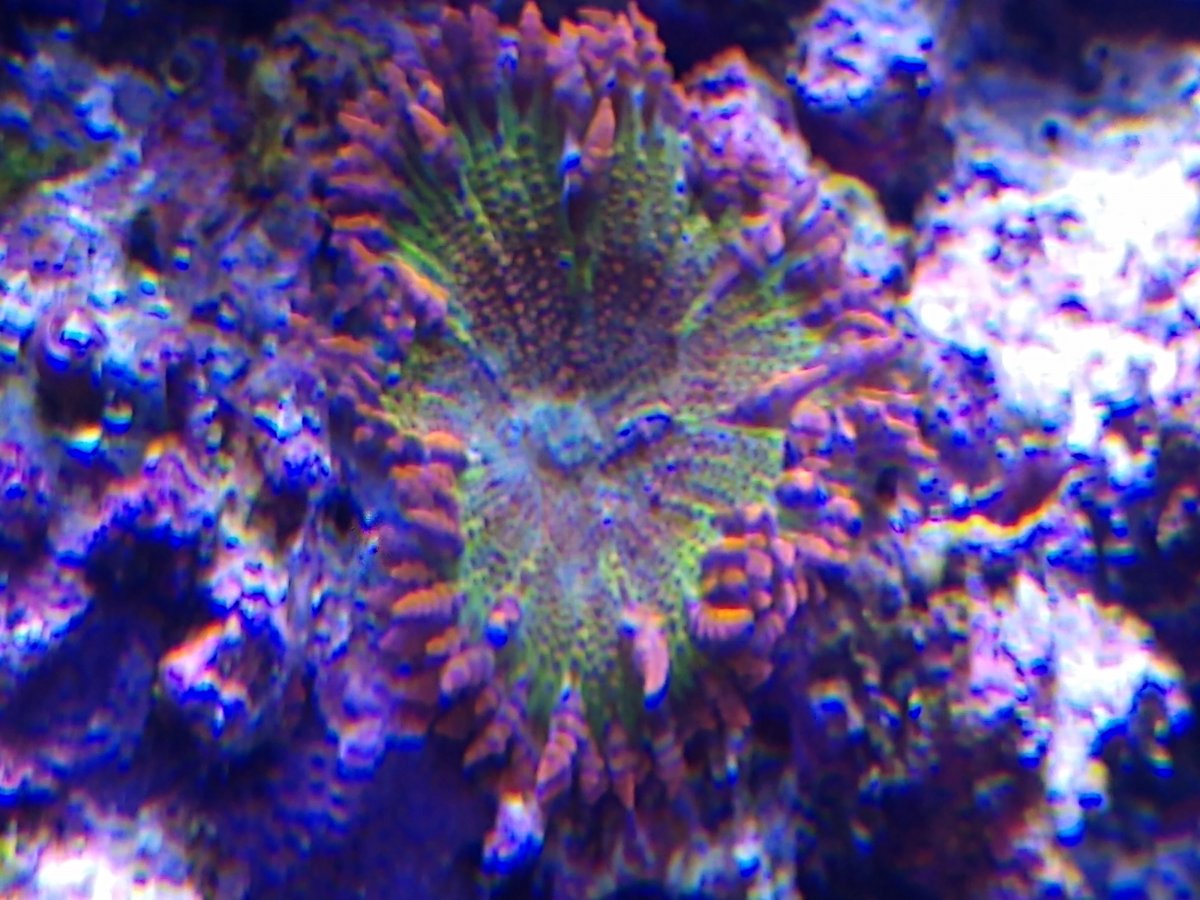 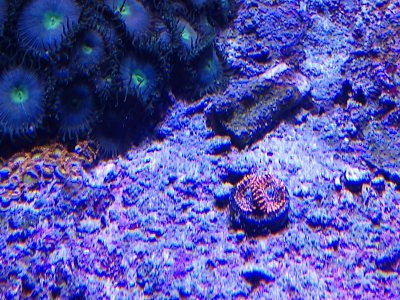 So the low salinity, due to not calibrating my refractometer, seems to have been my entire issue 2018 and nearly all of 2019. The Monti cap, that I thought was dead, is now coming back and has an nice orange color again. The one remaining monti I had = a "sunset" is now growing again and has more orange color than nearly pure greeen of a few months ago. The purple branching "digi", that I picked up a few months ago at the Cleveland swap, not only has great hairy polyp extention but has actually visually grown - I almost forgot was that was like. And I have not lost any of the Reef Gallery frags I picked up at the Black Friday deal ( thank you Kevin and Jaime) . So, I will actually have to start testing regularly and figure out a dosing schedule again as corals will now be uptaking Alk, Mg, Ca as they should. For a final test I picked up a decent sized Green "slimer" frag at Reef Gallery a few days ago - it should be a good test to make sure the tank is really ready for SPS again, or not, and will determine my buying attitude at this years LEAR fragswap.

Ph probe = 8.0
Tested both Hanna and Salifert Alk= 7.3 DKH
Tested both Salifert and Red Sea Pro No3= between 2-4
Hanna ULR = 30PPB = 0.092ppm phosphate ( I changed out the GFO in both areas in the dual reactor a week ago)
Salifert CA+= 440
Salifert Mg+= 1440
Salinity = 1.026 ( yes, I have had to re-calibrate this stupid refractometer each and every time as it was OFF each time - so maybe going to purchase a digital refractometer - opinions)

I have a digital refractometer (Milwaukee MA887). Not sure how much dust it collected over the years due to its unpredictable output. Different readings every time with the same water sample. +/- 0.002 variance, give me a break.
A high quality regular refractometer is much more consistent and accurate IMO.
OP

Hmm .. well I have never had a refractometer have to be recalibrated daily like my current unit. In 24 hours it reads .oo4 high ( usually) , so if you use the reading without recalibrating your mixing hyposalinity water. I don't want to purchase a digital refractometer, but if I purchase another regularly refractometer, I am thinking it won't be any better than the one I have.

I'd imagine there are different brands of regular refractometers. You've seen mine. It's ~12 yo and I have calibrated it maybe twice over the years. Mine feels much heavier than yours, FWIW. Someone around here should know which brands seem to be better. I'll check at home later if I can still tell what brand I have.