Anyone keep mollys in a reef?

I know mollies can do brackish and even full salt temporarily, but has anyone ever kept them in a reef at 1.025 long term?

How long do you acclimate them? Bump salinity in QT .0025 per day, or can they take a faster rise?

Do diseases likely not survive the change, or are they parisites and such that can also handle fresh and salt?

Converted my mollies (acquired 7 months ago) from freshwater to saltwater, then back to fresh (ich issues), then back to saltwater. Currently the fry I've got are around 3 months old. The adults can be sensitive to rapid salinity changes (1.000->1.015 or so). But the fry can go from brackish (1.010-1.015) straight to salt and be fine. The only problem is that the fry have a large tendency to get sucked into the overflow. I'd change the salinity over a week, and the fish should be fine assuming they aren't overly inbred.

Few if any diseases survive the shift from freshwater to saltwater. Hence why I could take the ich infestation on the mollies, bring the salinity from 1.025 to 1.000 and cure them. Then it was back to saltwater once the disease was beaten back.

I bought 7 I don't even remember how many months ago, converted to 1.023 over 2 hours. 6 survived and are still going strong today. They've even had fry, though my other fish ate the fry. Or at least I assume so, because several looked super pregnant before I left on vacation and when I got back, none did. Never caused any issues in terms of nipping corals, though they were somewhat mean to the other fish, and annoyed the heck out of my Maroon clown, marine betta and moray eel. They spend a lot of time picking algae and pods off the rock.

I also got a batch of mutants, or that had somehow been exposed to marine ich and survived prior to my purchase. I know this because I have ich in my display and the ONLY one to show it is my Hippo.

What I'm saying is mollies are tougher than the T-800 and have a similar attitude.

Edit: Mollies can Harbour parasites, both internal and external. Fortunately the external parasites are killed by the salt water, so that isn't a worry, unless you buy them already living in saltwater. However I have heard the internal parasites can sometimes carry over, and should thus be watched and treated for. It's pretty obvious though, when they start defecating huge strings of white schmoo. 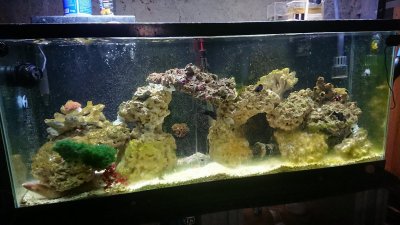 M
Mollys in a Frag Tank?

Top 10 Benefits of Keeping Mollies in a Saltwater Tank

A
Acclimating saltwater mollies to freshwater?