Just started my first reef tank and added two clowns and three frags yesterday. Enjoying it so far - hopefully they survive. Trying to keep things as simple as possible. 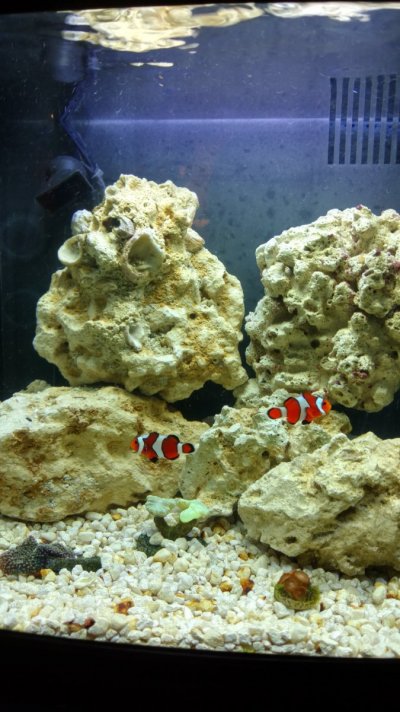 Nice looking clowns! Welcome to the obsession. How did you go about cycling your tank (since it appears you used dry rock)? If you ever have questions and don't know which forum to turn to, just tag your question to the @ReefSquad! Looking forward to seeing how your tank evolves.
OP

Thanks Trig. Well . . . I understand this wasn't the best way but I used tap water with Red Sea Salt and added Microbacter daily for two weeks. The only thing I tested was salinity. When everything looked good, I added the fish and corals. I realize there are probably a lot of other things I should have done but my plight is simplicity. . . hopefully not at the expense of the clowns and corals but all is well so far.

I'm starting to get algae growth on the top of my rocks closest to the lighting and my coral in the lower right corner of the pic has stayed closed for the last 24 hours. The clowns and other corals seem to be fine. I keep my blue light on about 12 hrs a day and turn the white light on around 6 hrs a day. I also keep the tank covered during daylight hours. Do I have a problem that should be addressed asap? Suggestions welcomed! Thanks!

hi it is a new tank,w tap water ,how are phosphates,would back them blues to 8 hrs for now 1 before whites ,1 after.
OP

Thanks fish guy. No idea about phosphates and no testing mechanism. Is it okay to use an algae treatment or will that potentially damage the corals?

Don’t worry about the algae, that’s normal. Please don’t use anymore tap water though. Eventually you will kill your tank with it

i'm sorry cannot answer that ,i do not use chemical fix in a bottle

Unlike freshwater tanks where you might be able to get by on tap water you really don’t want to use it for a reef tank. It has things in it that feed the stuff you don’t want like diatoms, hair algae, etc. Not to mention metals can be present that will kill the majority of the tank, which unfortunately can trigger a cascading die off.

Okay thanks. The coral seemed to be thriving until yesterday. Hopefully it will eventually open back up.

Two high level approaches: Identify the cause, or simply address the symptoms.

Identify and address cause:
Attack the symptoms:

I'll add that in mature systems, the secret is to having a sufficiently high, diverse bio load which consumes a lot of the nutrients and which demands a fairly high input of food/nutrients, but which through all mechanisms maintains water parameters that are "decent", not necessarily ultra low nutrient, but low enough that the habitants win over the algae. So high input in (nutrient/food wise), high export of nutrients out (though whatever means).
Last edited: Jan 31, 2021
OP

Thanks Triggs. I think I'm feeding too much as you suggest. I also decreased my dosing with Microbacter per the instructions. It was due for a dosing today. Hopefully food reduction will help. I had been feeding the clowns daily. I didn't realize I could only feed them 2-3 times a week.
OP

Strange . . . the brown growth (assuming algae) has disappeared. I cut back the lighting and changed my filter cartridge just a few days ago. The Zoa coral remains closed. May try a water change if it doesn't open in the next few days.

The zoas will perk back up. How many hours of light do you have them on now?

Specific Ocean said:
The zoas will perk back up. How many hours of light do you have them on now?
Click to expand...

Hope so. Roughly 8 hrs blue with 6 hrs white in between. Just started this a few days ago. I was originally doing closer to 12 hrs blue and 6 hrs white.

Tanks go through phases that are just out of our control. We can do all the things to reduce it, but let it just run it’s course.

Give it a day or so, if it’s not opening up, try placing the frag elsewhere. Maybe not so much flow
OP

Specific Ocean said:
Tanks go through phases that are just out of our control. We can do all the things to reduce it, but let it just run it’s course.

Give it a day or so, if it’s not opening up, try placing the frag elsewhere. Maybe not so much flow
Click to expand...

Thanks Spec. I appreciate the advice as I am all about keeping things simple. The more hands off the better as far as I am concerned. Funny - your suggestion makes me think the nano tank (or any tank) is a little like life. You can get consumed trying to control matters to achieve desired outcomes, but at the end of the day, very little is within our control. Thanks.

No way!! Jeremiah Johnson - best movie ever except for maybe The Good the Bad and the Ugly. You are a kindred spirit, Specs.

Any advice for my next project?