The innocence is an act!

KrisReef said:
This reminds me of a Climate Change story, you can't deny it's happening and the outcome is terrible but could possibly be prevented if we just change our habits?

The clownfish were good Samaritans administering a powerful sedative to calm your drowning damsel-in-distress. The bubble tip got a nice fresh meal and the damsel is done with suffering now and in a much better place than you put it.

We all get-it in the end.

Every time you move a business to Asia or Mexico from the United States you make the World a more polluted place . They just ain't got the environmental standards .

Technewb said:
So I removed a live rock from my display and didnt realize one of my damsel was hiding in there. He was out for a few minute and I put him back into the display. He was alive trying to catch his breath and then suddenly my 2 clowns dragged him into my bubbletip. RIP damsel. Couldn't react fast enough.
Click to expand...

A little over 2 years ago I got back into the hobby. I purchased 2 small baby clowns. The fish who became the female was by far the most aggressive fish I’ve ever owned. I despised this fish. Every time I put my arm in the tank it would attack me, startle the hell out of me. When she jumped out of the tank and perished. Wasn’t very upset at all.

14 months ago I bought a pair of breeding ocellaris with a large [sand?] anemone that were together for 4 years, but the female was older than the male by nearly 3 years. They spawned every 14 days without fail and the fry hatched exactly 10 days after each time. Poor female passed away last month aged 8+. The male was looking lonely for almost a week so I went to buy another smaller tank bred one. After acclimation I let it (I say "it" because it's still gender neutral) go. It went straight to my existing male and they paired up without incident. What seemed unusual to me was that the new, smaller ocellaris, was steady as my existing male played the submission game by turning on his side and shaking. That behaviour stopped after only one day. Now they are always together and dominating an area around the anemone - constantly chasing away any would-be intruders. It's only been 2 weeks since I introduced the new ocellaris. I'm guessing that the existing, larger male will become female but I can't be certain yet because neither are displaying the submission dance, however they are both nipping and cleaning the same part of the rock that the late female laid eggs on for over a year. I've read that the sex change + hierarchy can take up to 3 months. As far as being savage, these 2 are pretty calm until I went to feed the anemone with its weekly chunk of food. I use a half inch black pipe to steer the food into the anemone's tentacles. I need to keep it there until the anemone closes around the food - if I don't, the clowns will pull out the food and drop it outside their area where the other carnivorous fish will feast on it. For now it's a waiting game to see which one will become the dominant female.
Here's a short video of the previous female laying. I'm hoping that this will occur again with the new guy. 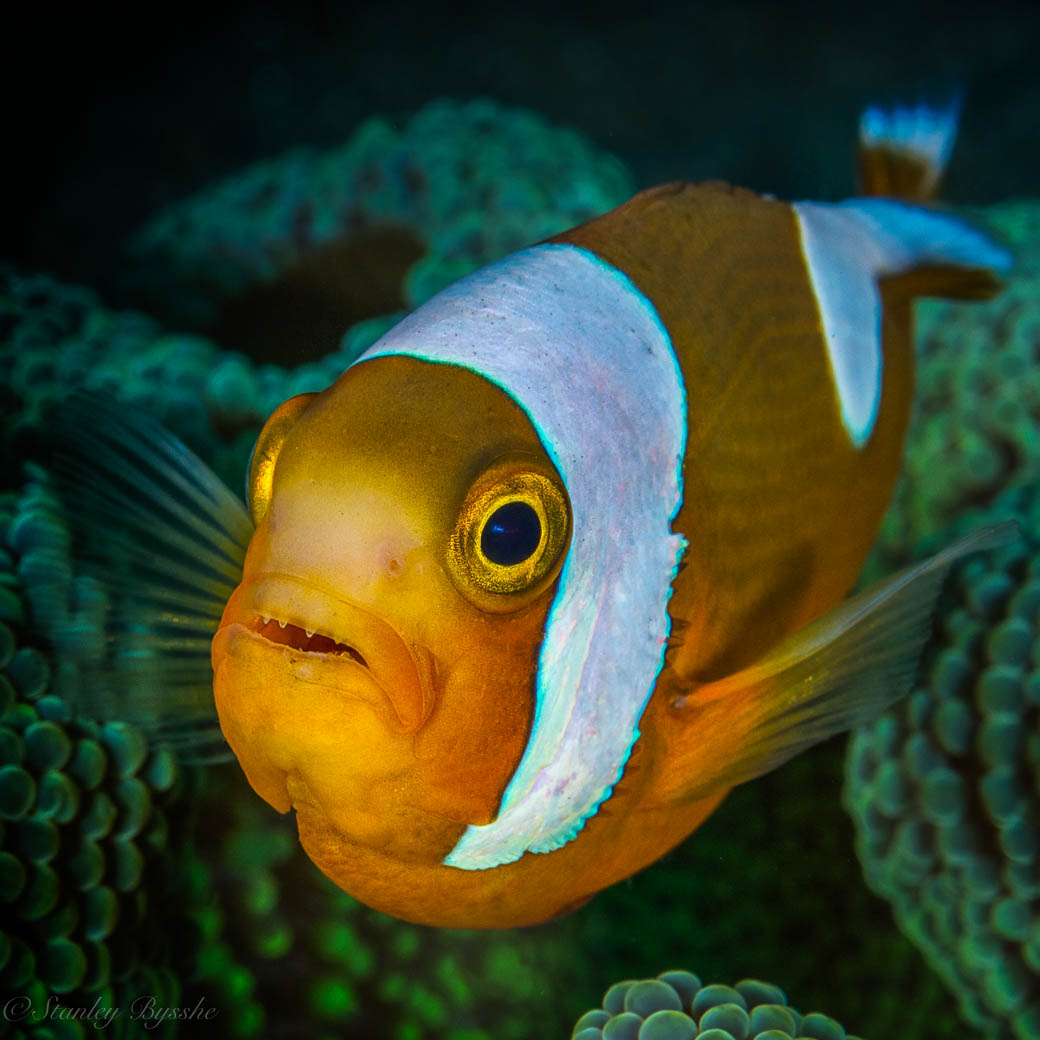 Well you got the picture.

They certainly can draw blood. Once I had to put my hand in the tank to afix a coral that was knocked over. The late female let me know that my fingers were not welcome. My middle finger was bleeding a little. Since then I always wear gloves.

your clownfish are the MIB
D

Wow! I hope mine don’t turn out this evil!

My pair of platinum perculas have been the sweetest clowns ever. The only incidents of aggression from them were when they were in a 10g QT for over a month while being treated for brook/velvet (still unsure) and took out their frustration of cramped quarters on the black mollies being treated with them.

Since returning to the display, they’ve been great and even made friends with the mollies again. 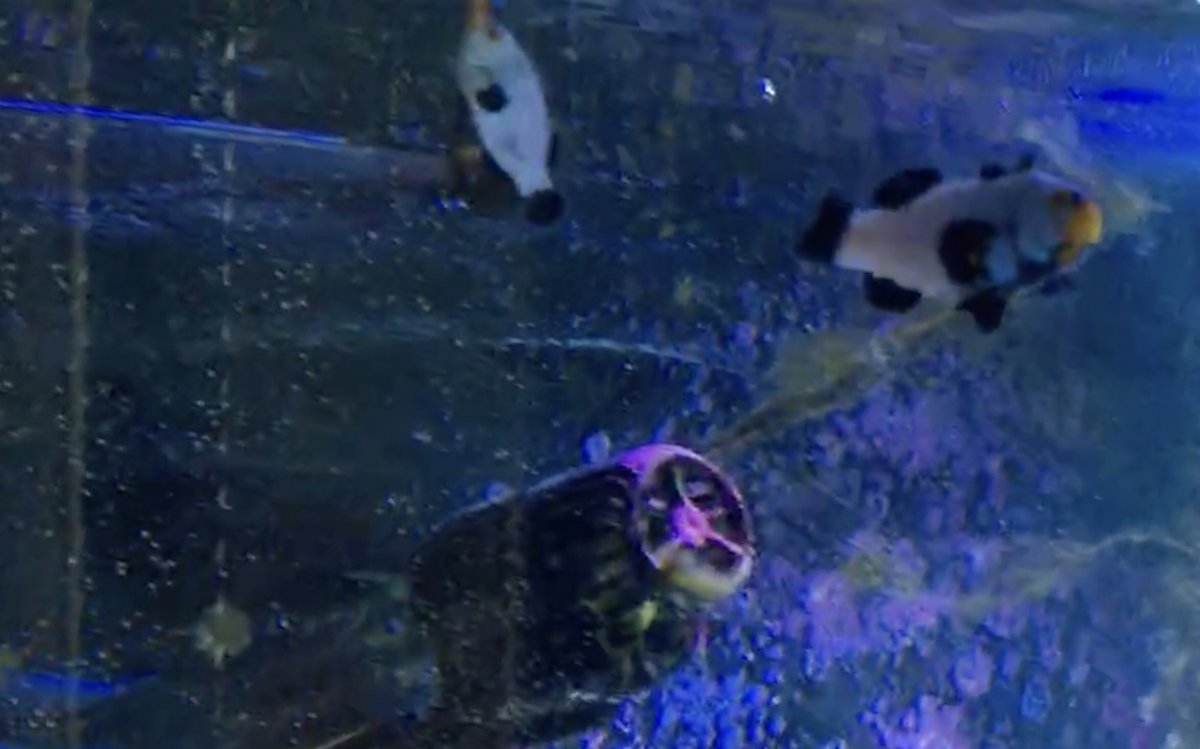 I use to have a pair of clowns and the male would draw blood on me everytime I put my hands in the tank. I started wearing gloves and he would take a chuck out of the glove too.

MombasaLionfish said:
Well you got the picture.
Click to expand...

I think it is a well known tactic amongst reef Clownfish: draw blood and let the real big fish take care of the photographer!

Magellan said:
I don’t know if it’s a trend or not, but many of these posts seem to be describing “designer” clowns, (What I call GMO clowns). Either way, it’s always better to be lucky than good!
Click to expand...

Mine were regular Ocellaris. I have a pair now that are nice. Female is black snowflake and male is a regular black clown.

Lots of interesting storys. I had a pair of clowns in my 18" nano for 2 years. Only other fish was a 6 line wrasse.
The female was shy. The smaller male would attack me every time I put my hand in the tank.
The female constantly bullied the male to the point that when I setup my current 120 I took the female to a lfs. She now resides in a 150 semi display.
The male is in my 120 and resides in a current 12 head frogspawn. He stays in his corner most of the time and comes out to feed. He still goes after my hand but much less I believe do to more space. He will chase any fish away from his space.
He seems much happier now. Just took this one with lights off. 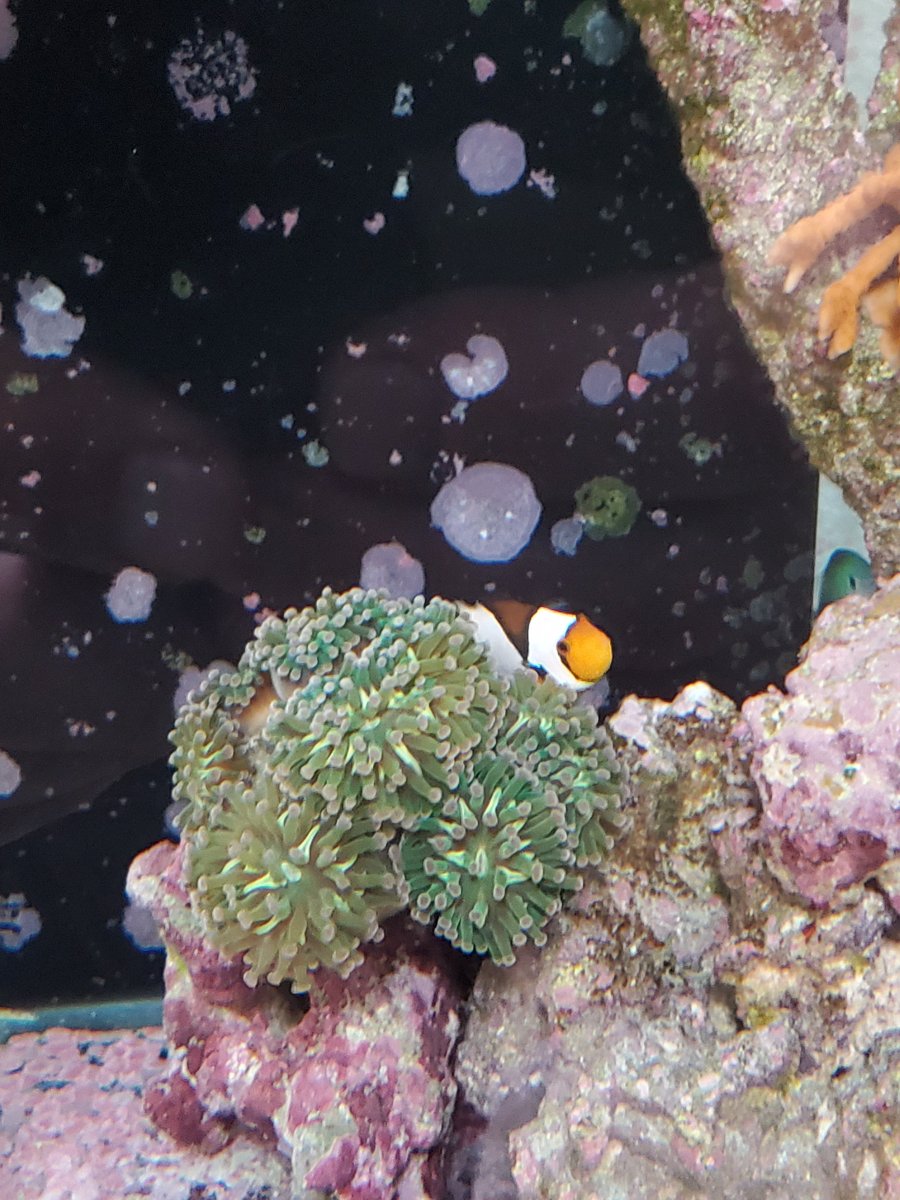 Does the hosting behavior inspire more aggression? Seems like the most brutal stories here are when clowns are with a BTA or similar.

Mine are apparently some of the calmest clowns ever, despite being perculas. The only real difference I can see is that they’d rather school with my chromis than try and host anything.

I think so. My clowns were never aggressive until I got a BTA. Some months since, they've calmed down some. I haven't been bitten in a while.

Indytraveler83 said:
Does the hosting behavior inspire more aggression? Seems like the most brutal stories here are when clowns are with a BTA or similar.

Mine are apparently some of the calmest clowns ever, despite being perculas. The only real difference I can see is that they’d rather school with my chromis than try and host anything.
Click to expand...

I think now we are on to something. I don’t have a nem, my clowns sleep behind my heater (i could get a smaller one that would fit in the rear, but then they wouldn’t have a home!). They are also really peaceful.

Magellan said:
I think now we are on to something. I don’t have a nem, my clowns sleep behind my heater (i could get a smaller one that would fit in the rear, but then they wouldn’t have a home!). They are also really peaceful.
Click to expand...

That might be bad news for me then! I just bought a baby BTA. Maybe they won’t notice it for a while!

Just about all fish are opportunistic swine. If they ‘think’ they’ve an advantage, or see opportunity, they’ll press it. The last time I ran a small tank, the dominant was a large piece chalk basslet - supposed to be mild mannered ..... not mine! BTW, it is common for clowns to actively feed their host anemone. It part of the mutulaistic relationship. Fish feed anemone and chase away nippers; anemone provides shelter and protection.