So, I started my account after already having my original tank running. Then I was extremely lucky and got my big tank free from a LFS that was upgrading and I didn't share any of that build. I'm at a point where I feel like I'm not seeing any progress, so I started taking a full tank shot once a month. I've had some ups and downs since I started that and there was definitely a learning curve going from 20 to 90, which I didn't expect in such capacity. I had some monti and acros that did amazing in my 20 but bleached and died after the transition over, I started doing well with them again, saw a HUGE burst of coralline growth accompanied by a massive decline in magnesium, and lost all my sps again.

Since that point, I started auto-dosing with redsea, then once stabilized moved over to Tropic Marin's All-for-Reef (which I love!). No issues with calc,mag,alk since then. I test weekly. I was buying premixed saltwater from my LFS, then happened to stop at a different LFS one day and almost nuked my tank with their water. My nitrates jumped from 5 to 15 and my alk from 9 to 12 with a 10% change, I have no idea what was in that water.... Had a few LPS that didn't bounce back from that and decided it was time to mix my own water (I was already making my own RODI anyway, why not make my own saltwater?). I use Tropic Marin Pro-reef salt now, and honestly only do about 6g a week in water change. It's not a lot but it's working for me.

I don't have a lot of fancy tech equipment, I'm running 2 viparspectra lights, an aquamaxx skimmer, jaebo return, jaebo crossflow, and 2 jaebo wave makers. I added a green killing machine back when the LFS water nearly nuked my tank because I had dinos/diatoms/cyano all pop up with that snafu. I also added an oxydator some months ago that I run with 8% and refill about once a month.

Recently I switched over to Easyreefs easysps and easybooster and I'm seeing some of my sps start to color back up, I unfortunately feel like even the ones that stayed colorful haven't been growing. I don't want to chase numbers, but the only thing off is my ph is on the lower end of the recommended reef spectrum - I blame my husbands beer brewing and us having co2 taps in the house. Considering a co2 scrubber to help combat that.

I'll get some photos up later from my monthly attempts at documentation....

It's still fairly low tech though. In the next few weeks I'll be temporarily downsizing to a cade 600s2 until we move, then setting this tank back up at the new house and transitioning the 600 into a pony tank. I'll continue to post on this thread throughout the transitions, and start a new thread for the 600 once it swaps to ponies. Ponies will keep my gorgs and softies, 1200 will get my lps and any sps i choose to keep back into it after being set back up.
Last edited: Jun 12, 2022

Here's a decent top down shot of my zoa garden....from Dec 19, 2019. You can see one of my clowns in here, they've taken to the Armor of God zoas and as a result, the AOGs are tough as nails and spread like wildfire. 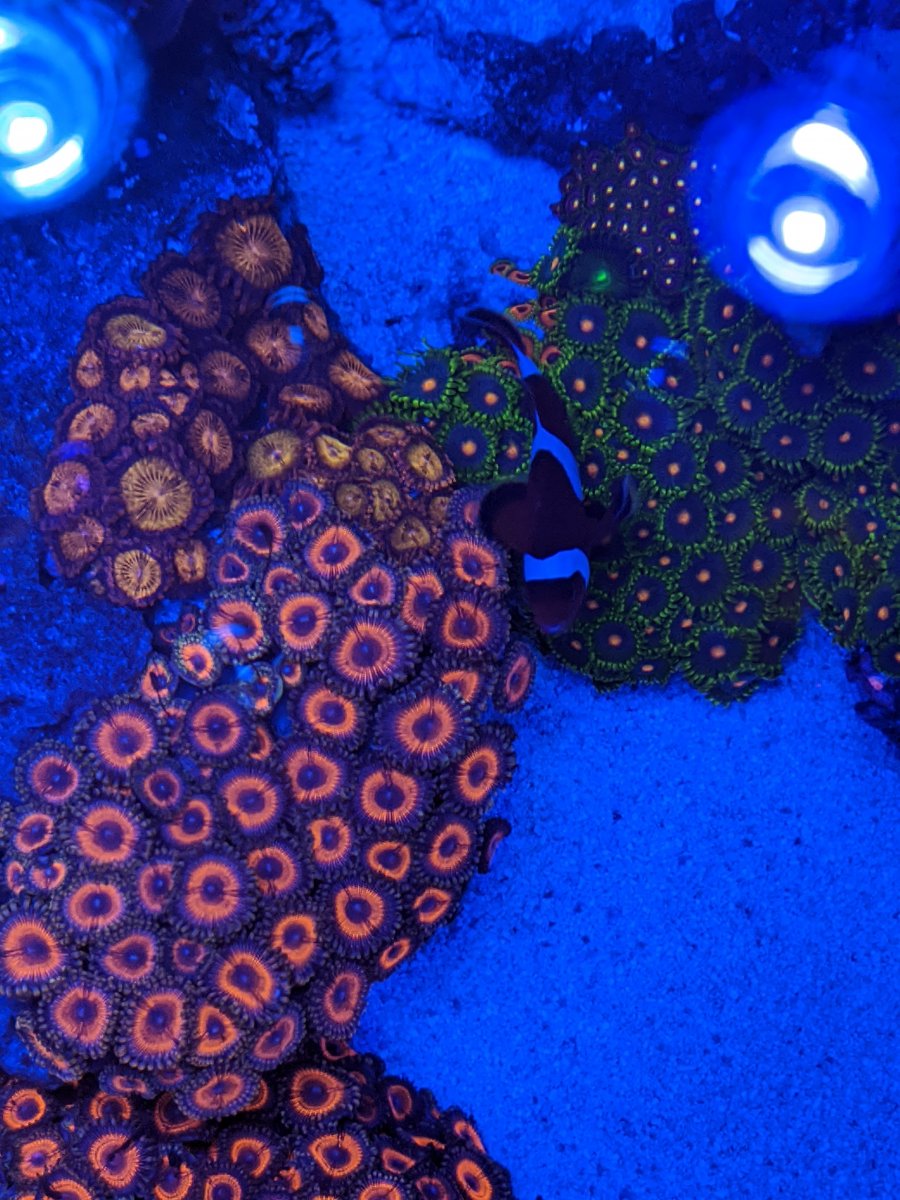 The 20g I rescued on day two, vs awhile in... I lost the torch, the stunner, and the monti in the great magnesium plummet of 2019 in the big tank 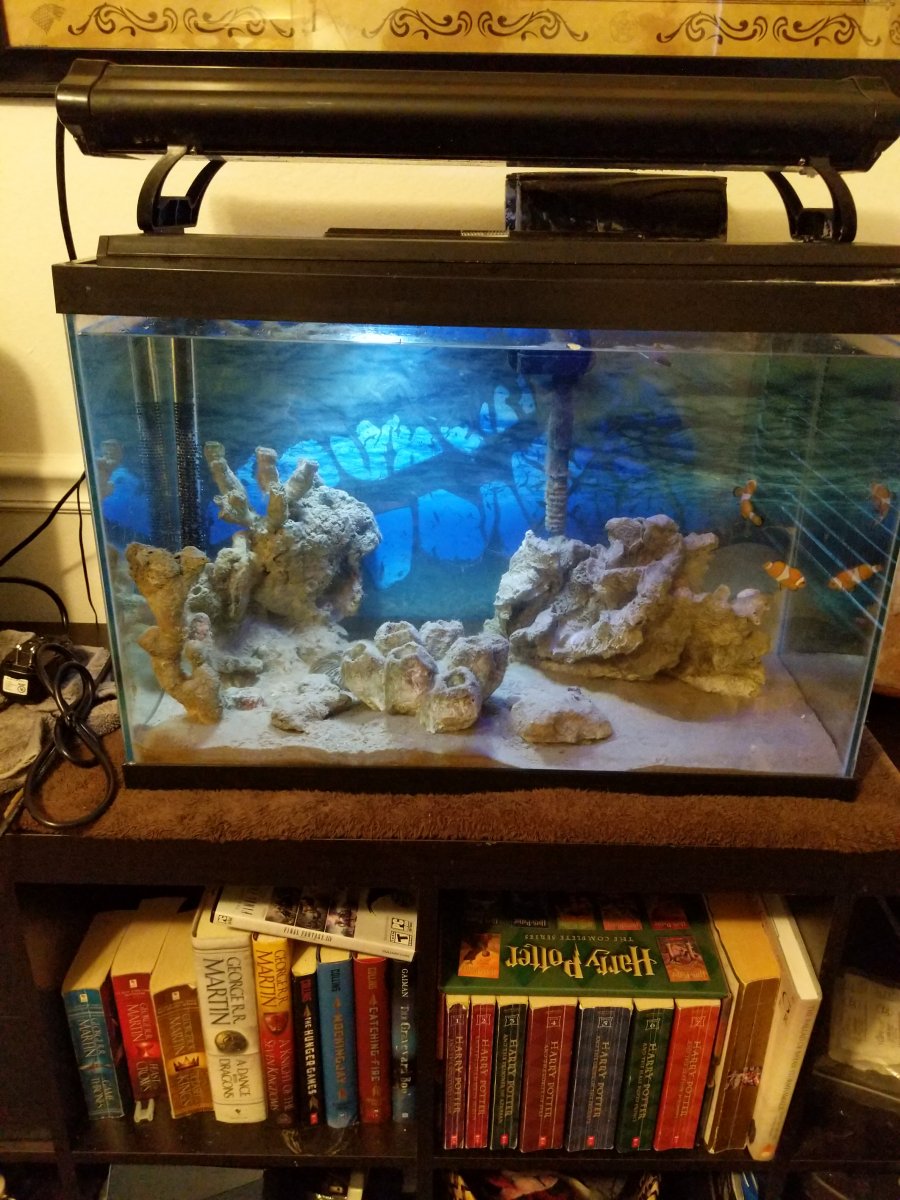 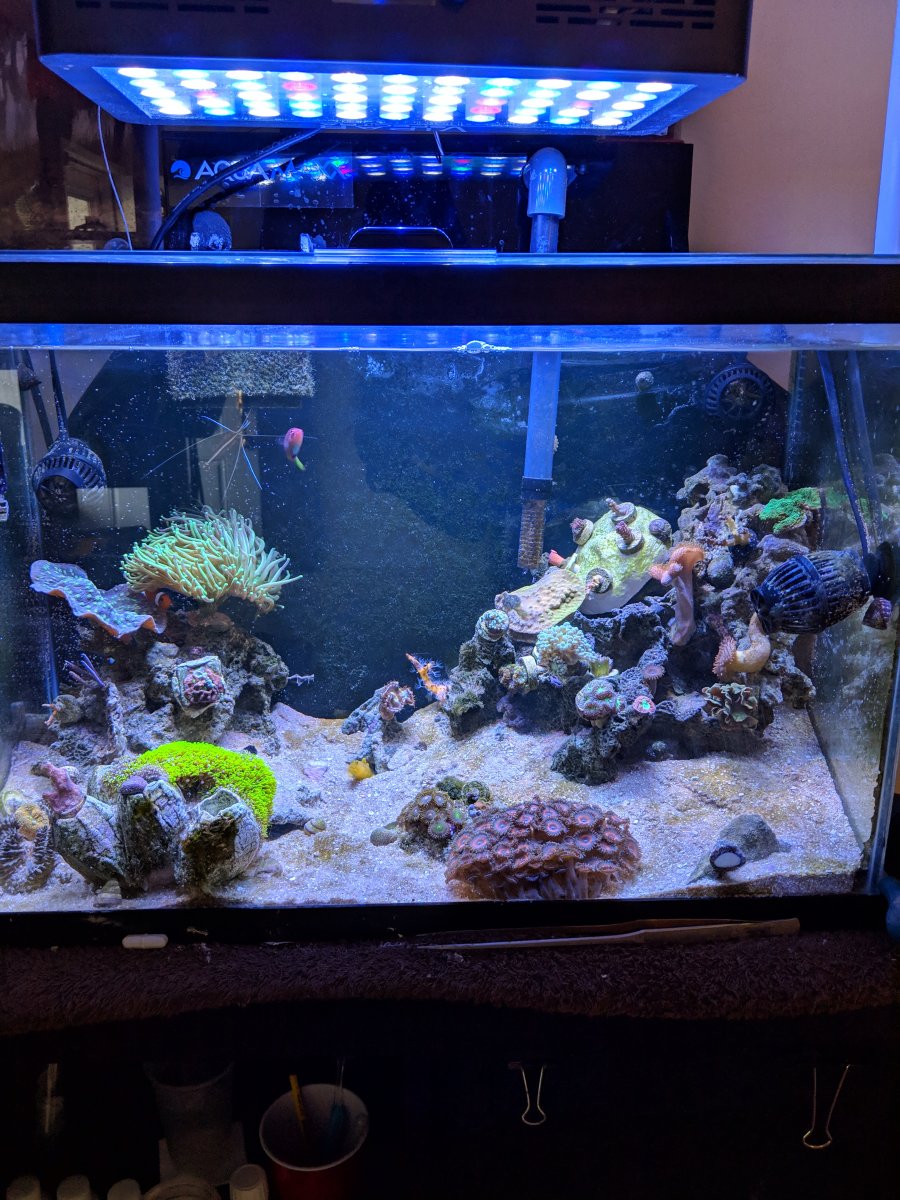 As I mentioned before, we got the tank free from an LFS, used. My incredibly talented husband built a new stand and canopy - as well as a matching cabinet because the one that came with was falling apart and white. Here's a few photos as it was starting up.... Mostly to show off his skills. 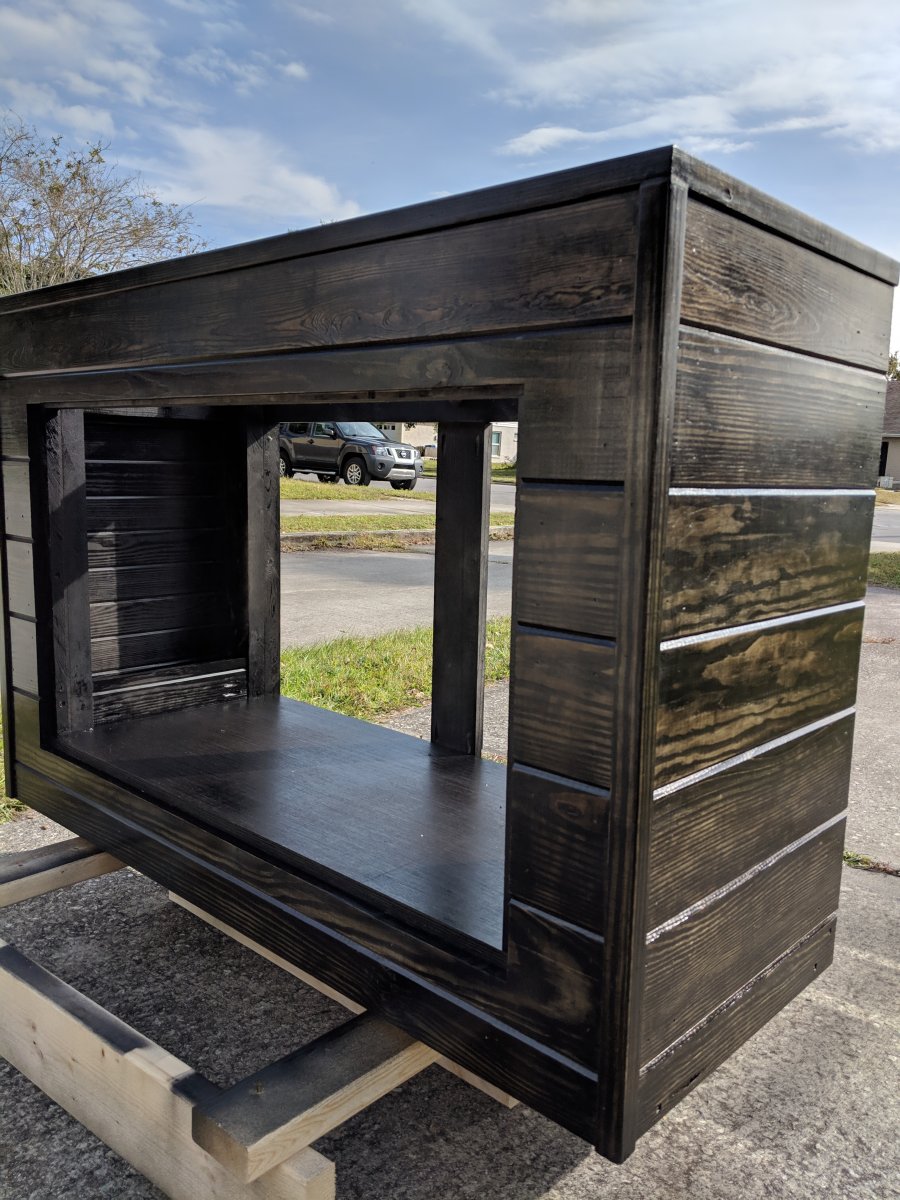 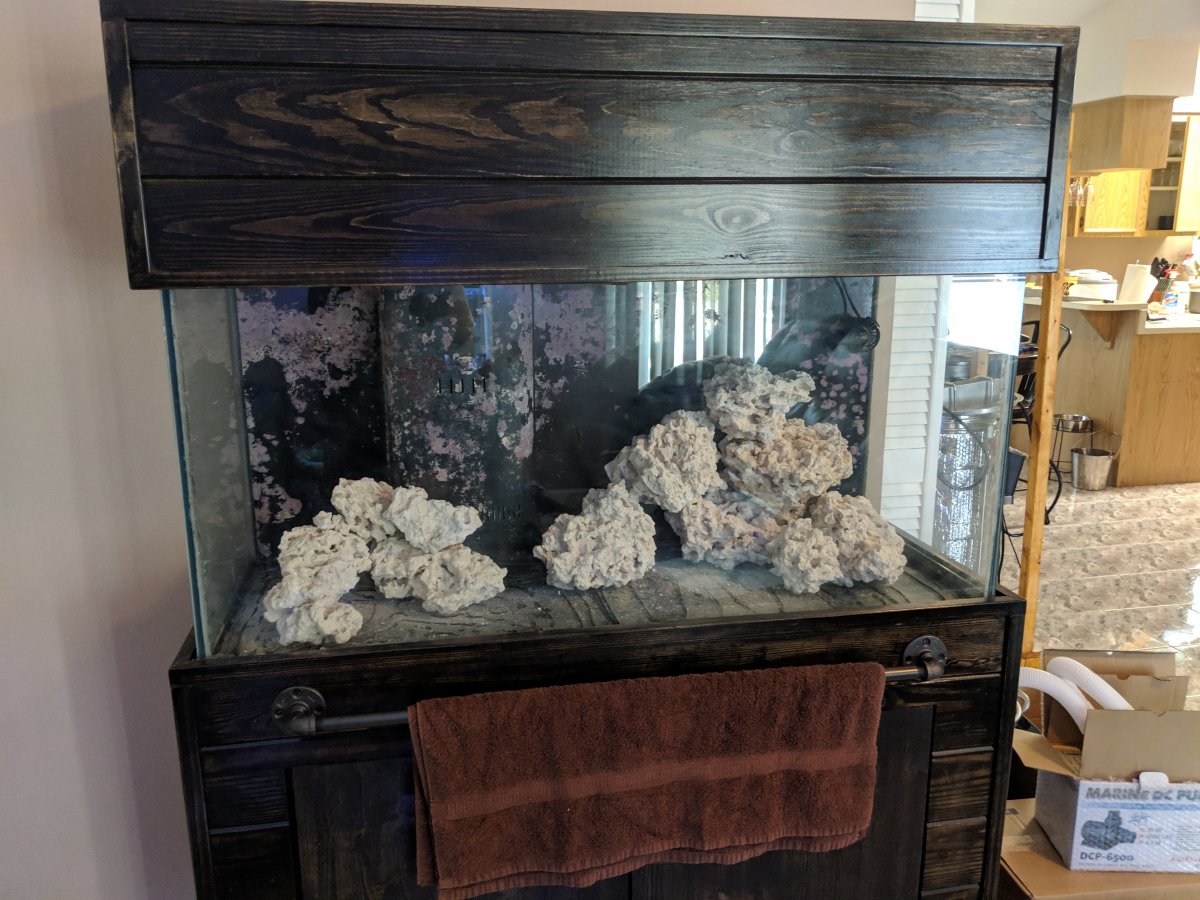 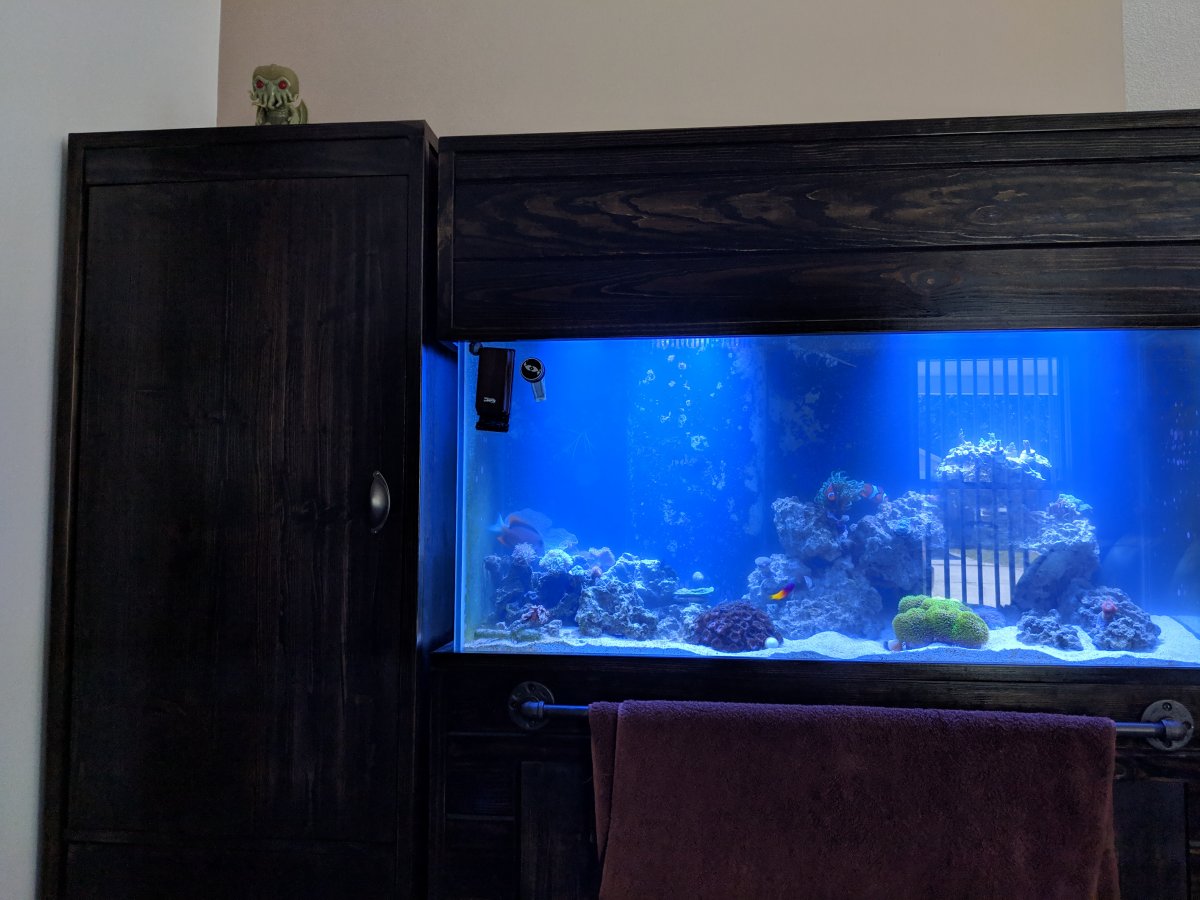 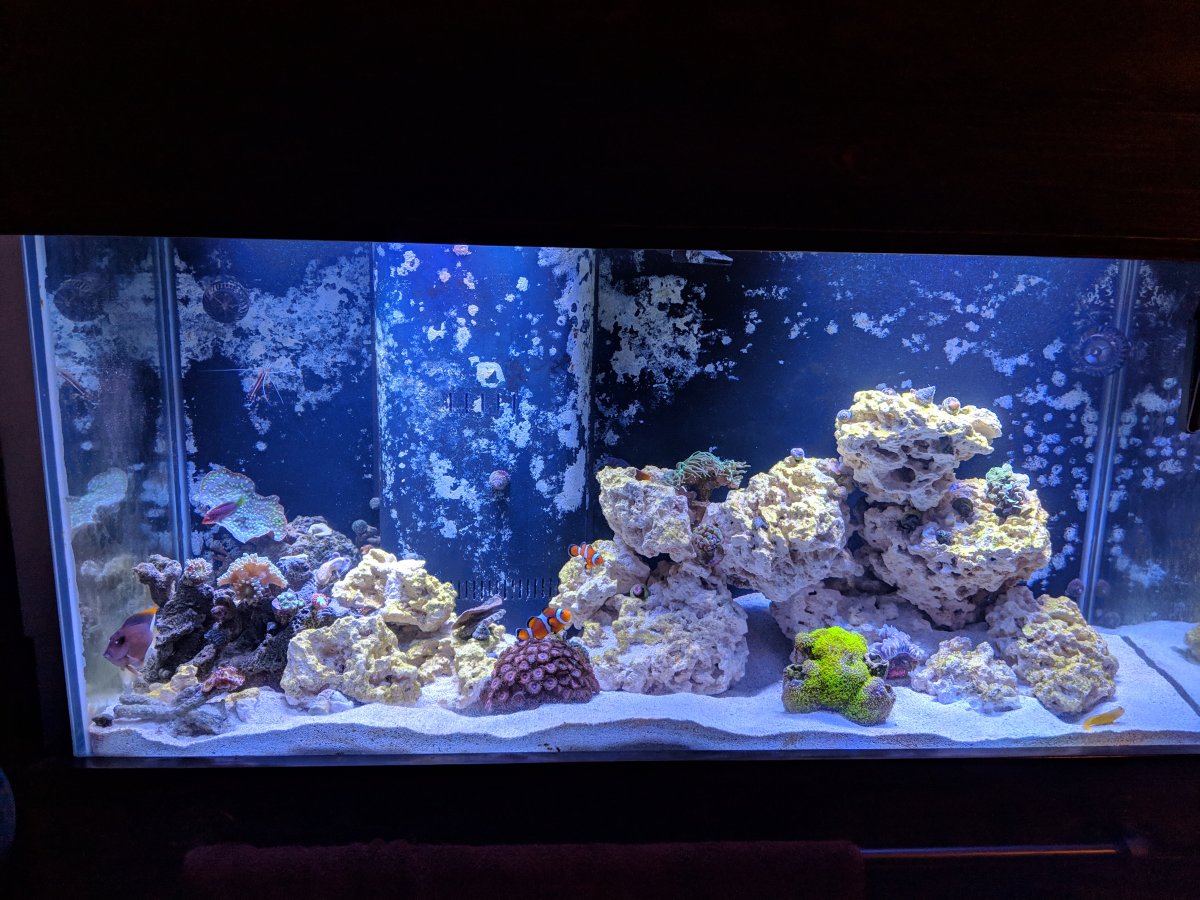 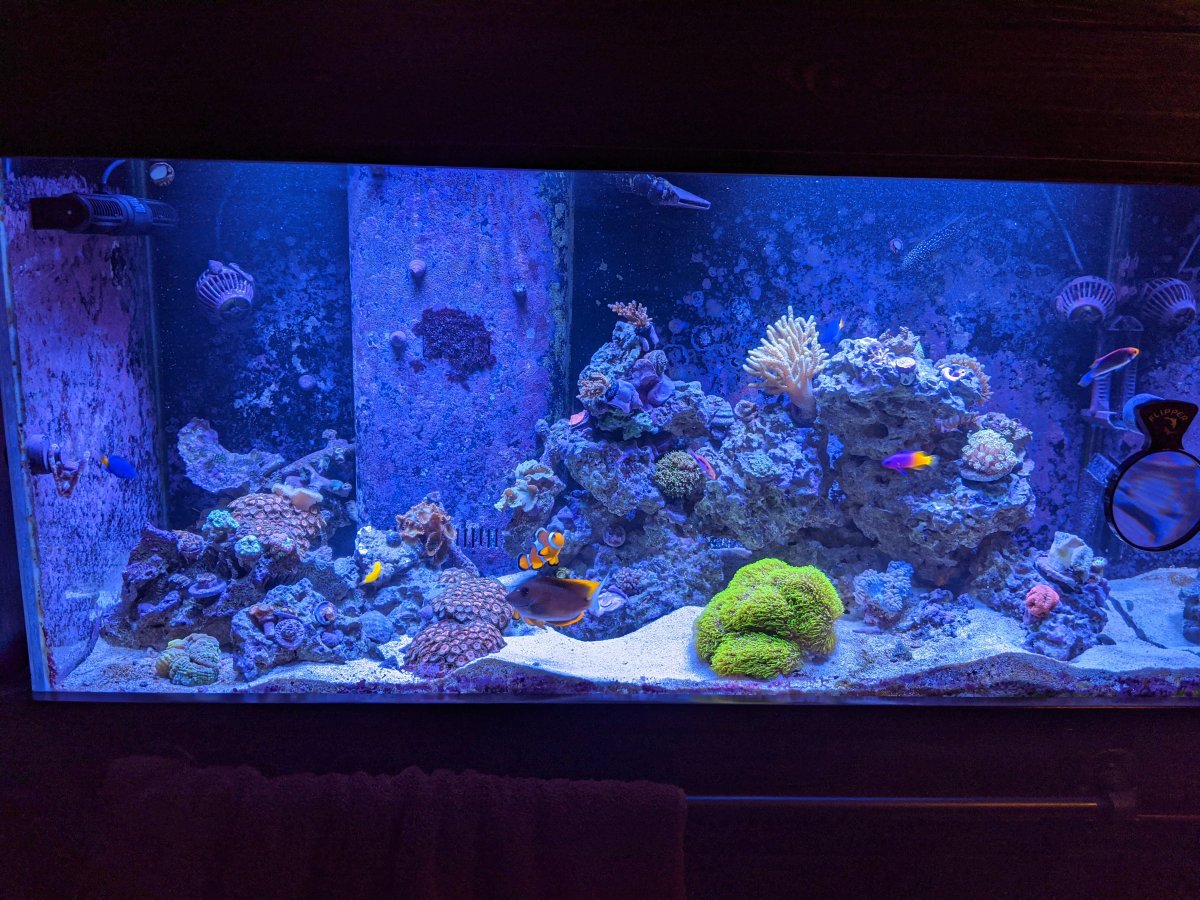 Started running carbon (just in a bag) this week and plan on changing it out weekly to see if I'm having issues from leather toxins.

Struggling with low flow in one chamber of my sump. Eshopps branded and it's supposed to be the refugium chamber (obviously that won't work with chaeto). Short of adding a small pump or powerhead, anyone have ideas for troubleshooting the problem? It's been pretty bad since the beginning but lately I'm getting a gross filmy buildup that I'm cleaning out daily.
OP

Frozen for both, 1x a week typically:
LRS

Dry Fish foods:
autofeeder 2x a day Omega One marine flakes and kelp flakes (looking to replace - taking recommendations)
Easyreefs masstick 2-3x a week (once I run out of powder I'll be switching to easymasstick)

Looking for a good soft pelleted food to add to the auto feeder, almost out of the flakes and the fish don't like the Omega One brand pellet. Fish did NOT like PE either, thinking they don't like the hard?

Considering a mixture Nyos soft pellets right now - does anyone have any feedback on these for me??
OP

What's happened in the last 2 months??

Pulled all for reef offline for a bit this week, had a calcium/magnesium spike. Tank is using a LOT more alk than anything else at this point. Will resume once I get everything balanced back out.

Went with NYOS soft pellets, mixture of all 3 for the auto-feeder with great success.

Finally broke down an ordered a baby koji wada pink nepthea frag from Unique Corals. It's doing well, just arrived within the week.

Added 2 citrinis clown goby and a mimic lemonpeel tang to the livestock list.

Pulled apart one of my Armor of God zoa colonies and started gluing it to the overflow box last night.

Haven't updated the thread for my big tank since May... 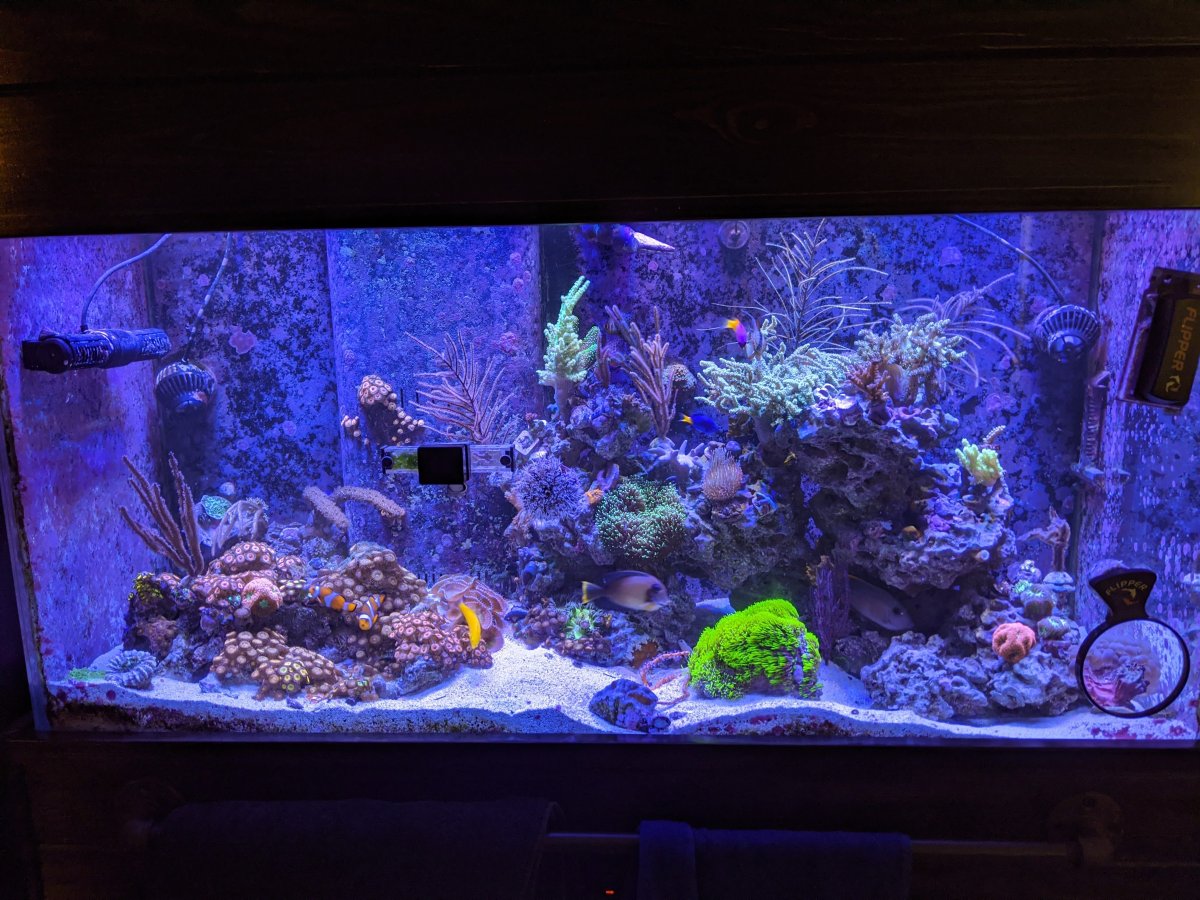 Another month in, here's an updated photo. No major changes to inhabitants (coral or fish) though some are more visible in the new photo than the last one. No major changes to tech either; however, installing a new reactor tomorrow as well as upgraded powerheads from a black friday/cyber monday purchase. 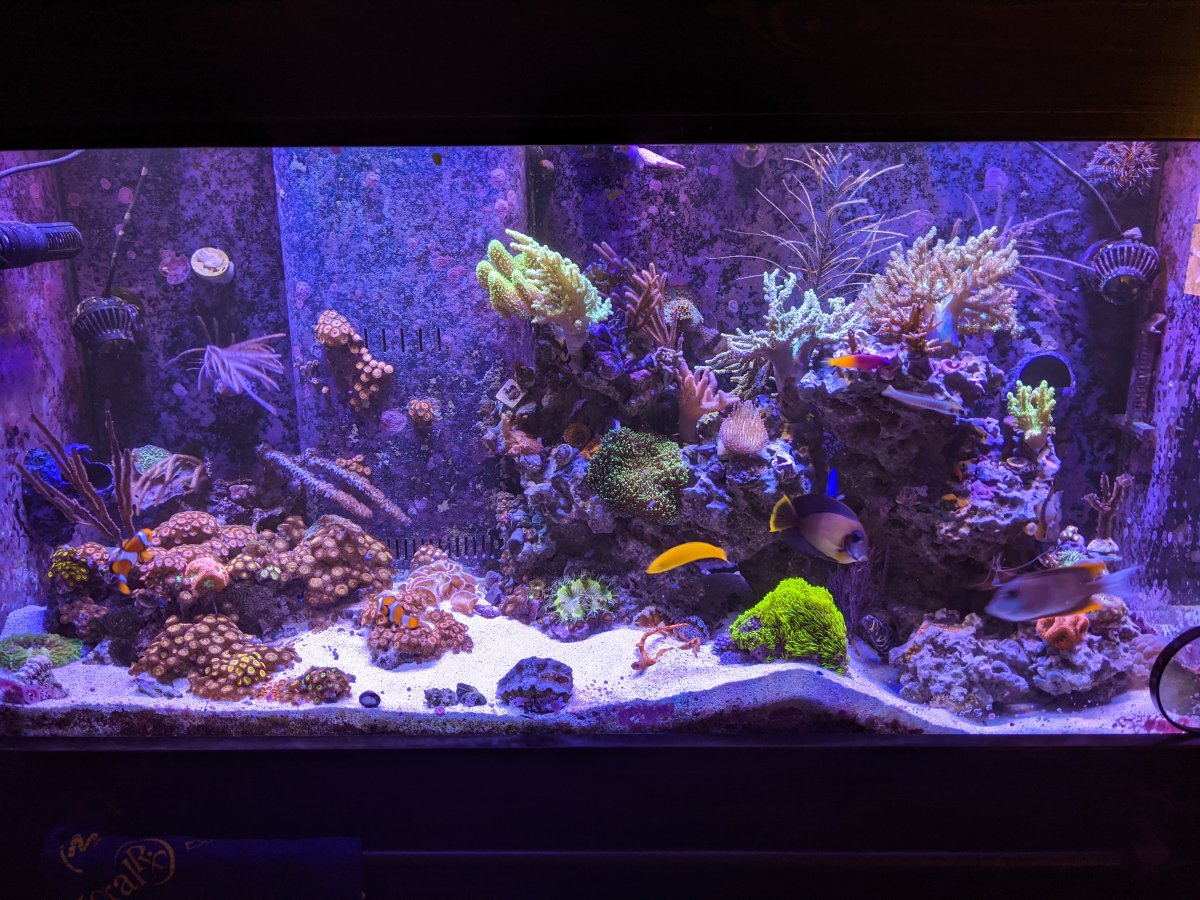 Finally got my dream fish in the tank. Really this is the last fish addition I was going for. I had one for about 4 months previously that mysteriously died with no signs as to why, so fingers crossed this guy does better. So far the tangs are afraid of him and keeping their distance. 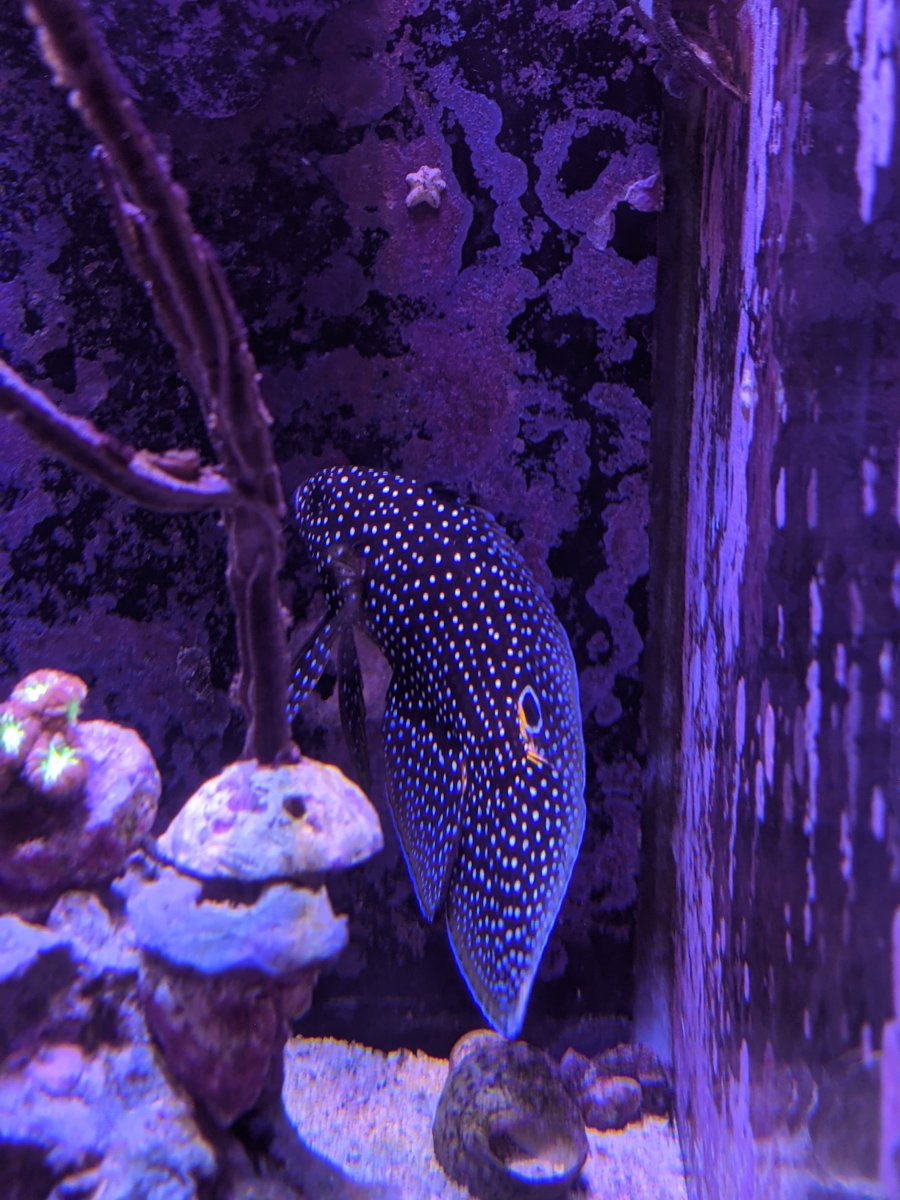 Looking into setting up some kind of a timer for my skimmer. I recently reorganized my dosing system and now it's dosing directly behind my skimmer, so I'm concerned the skimmer may be pulling some of the "extras" out and making them less effective. I was considering some kind of single smart plug into my surge protector, then putting the skimmer in that and setting up a timer to have it turn off say an hour before dosing begins and back on again about an hour after it ends? The various elements are all pumped in over the course of an hour, this would leave my skimmer off for about 3 hours? Does that seem reasonable? Anyone forsee any problems with this plan?

danieyella said:
Finally got my dream fish in the tank. Really this is the last fish addition I was going for. I had one for about 4 months previously that mysteriously died with no signs as to why, so fingers crossed this guy does better. So far the tangs are afraid of him and keeping their distance.

What type of fish? How are the armor of gods you put on the overflow doing?

I absolutely LOVE the stand, canopy and cabinet! Your Hubs did an amazing job!

sfin52 said:
What type of fish? How are the armor of gods you put on the overflow doing?
Click to expand...

They're not spreading as much as I expected them to, to be honest. My urchin pulled a couple off - of course. The others are alive and growing for sure, but moreso in little bundles instead of spreading out. I say that and today EVERY SINGLE COLONY of the armor of gods - no matter where it is in the tank - is completely retracted and pouting. All other zoas perfectly fine. Who knows.
OP

Erin O said:
I absolutely LOVE the stand, canopy and cabinet! Your Hubs did an amazing job!
Click to expand...

I know, he did soooo good with it. All he does is point out things he would do differently "for the next one" so hey - sounds like I've got the green light for an upgrade in the future.
OP

Bought a 2pk of these smart plugs and thanks to the glory that is amazon, they arrived same day & I installed last night. 1 for my fuge light because I always forget about turning it on/off. The other for my skimmer to turn it off around dosing time. Day 1 and it already seems like it's making a difference in that my skimmer cup isn't black yet - I assume this happens from sucking up all the easybooster immediately.

danieyella said:
Bought a 2pk of these smart plugs and thanks to the glory that is amazon, they arrived same day & I installed last night. 1 for my fuge light because I always forget about turning it on/off. The other for my skimmer to turn it off around dosing time. Day 1 and it already seems like it's making a difference in that my skimmer cup isn't black yet - I assume this happens from sucking up all the easybooster immediately.
Click to expand...

hi ,i would worry about on off ,of skimmer pump ,just my opinion,would not do,shorten life of skimmer pump,even the dc models that have feed mode

the tank is looking great btw