Hello All, I purchased an EVO 13.5 in October and wanted to show my journey with the tank, and hopefully let others thinking about the hobby see the pros and cons of working with the tank. Originally the wife and I wanted to do a larger tank, but due to the older house, with flooring being fixed (Not everything is level) and having to restore the floors we opted for a small “starter” tank to help us get accustomed to the hobby. We started to cycle the tank Nov. 5th 2019 and used Dr. Tim’s ammonia, and Bacteria. We watched a typical cycle biologically happen, which took about 2 weeks, and then waited before adding any clean up crew. We ended up with a mini cycle that took 4 days in the third week. Then the diatoms started happening, so we stocked with a trochus snail, 2 small hermit crabs and 3 astrea snails. After another week we bought a scarlet hermit crab, and tiger conch. The store we been going to recommended we put in a fish. While browsing there clownfish I ended up getting a small pair of orange storm clownfish. These fish have adapted well, and I ended up purchasing pellets too large for them. To feed the fish I would crush the pellet and give them little bits for about 2 minutes waiting for everything to be eaten before putting in more. The fish were doing well, and I changed the food and we decided to get our first coral. We purchased a Duncan coral and sa small Zoanthid frag. I did not dip the corals, and I should have ☹, I placed these corals in the tank on December 13th. the Zoanthid had bubble algae on it, and the Duncan had developed brown jelly. I removed the zoanthid with the algae and dipped what remained in Coral RX, it is currently clear of the nuisance and recovering well. The Duncan on the other hand got placed in a small breeder container the I attached to the side of the aquarium while I tried to rehabilitate it. This was a lost cause as I had seen a lot of mixed reviews about trying to remove the jelly and in order to prevent it from spreading, once it was engulfed, I removed it. Currently I have a GSP, Xenia and the Zoanthid, all of which are doing well So yesterday me and the wife picked out corals at a different LFS. We now have a red chalice, and a Jack-O-Lantern Lepto.
I did add another fish but he has deserved to be mentioned separately. Against our better judgement we got a neon dottyback. I had seen how a lot of people do not like them in small aquariums due to their tendency to kill shrimp, and the clean-up-crew. Our cleaner shrimp is a good size, and we decided if it wouldn’t work we would return him, and we talked about this with the LFS before we purchased him. The color is amazing, and the reputation I have gathered, and his darting around constantly make him look like he is up to no good. Before we got him out shrimp has been living mainly on the return head, and now we find ourselves doing hermit crab counts every day. The shrimp and the dottyback are very interesting to watch together, since introduction the shrimp has been on the rocks more, seeming to be keeping an eye on the fish. You can catch the dottyback hovering in the shrimp’s whiskers and occasionally they have stand offs. I have seen the dottyback Peck the shrimp, and I have seen the shrimp chase the dottyback. To me it looks like they both are keeping each other in check, and they are almost always together. All other clean up crew has been unaffected by the dottyback so far, this seems to be working. The clownfish eat food extremely fast and I noticed if the dottyback does not eat enough that’s when he gives everything (except the clowns) the stink eye. I have been making sure he eats all he can and now when he is done, he returns to his caves.
I keep extra shells in the tank for the hermit crabs, and they do not bother the snails, actually one time they lined all the shells up next to each other which was actually hilarious.
1 livestock loss so far the Trochus.
For equipment I replaced the return pump with an Eheim CompactON 1000
Sicce voyager nano wavemaker
Light - AI Prime 16 HD
InTank chamber 1 with filter floss then chemi blue Elite and phosphate balls in the bottom.
Second chamber houses an aqeon 50 watt heater
Third is the return pump.
DIY mesh screen lid, but I did the amazon recommend purchase together, and the clips for the side are too large (10mm) one day I will order the 6mm.
Salifert test kits
Alkalinity averages around 13
Magnesium 1310
Calcium 410
PH 8.2
Salinity 1.026
Temperature 79 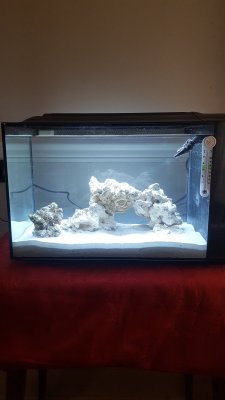 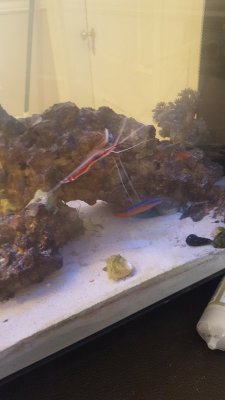 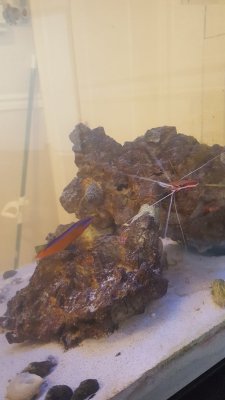 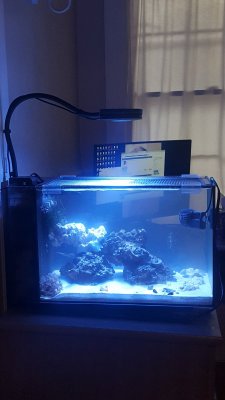 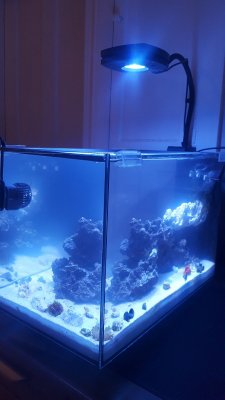 Looks great. I just got the same tank and I have only begun to add the cleanup crew. I'm curious what you mean by dip the corals before introducing them (I haven't learned about this yet).

I'm also curious how you like the new return pump, did you upgrade because the original pump wasn't sufficient?

What are your experiences with the intank filtration? I'm considering getting it and upgrading from the stock filtration, but trying to stay on a tight budget, but if it's necessary I plan on upgrading
OP

kiteski14 said:
Looks great. I just got the same tank and I have only begun to add the cleanup crew. I'm curious what you mean by dip the corals before introducing them (I haven't learned about this yet).

I'm also curious how you like the new return pump, did you upgrade because the original pump wasn't sufficient?

What are your experiences with the intank filtration? I'm considering getting it and upgrading from the stock filtration, but trying to stay on a tight budget, but if it's necessary I plan on upgrading
Click to expand...

I purchased Coral RX, the instructions guide you through mixing the solution, and then rinsing the corals. When I did this with my green star it killed off green hair algae, and it took a bristle worm out of my xenia. This prevents adding pests into your aquarium that you probably don't want.

I upgraded because I want to get higher flow through the tank I believe the stock pump is rated at 80 GPH, the eheim can do 280 GPH. This helps run more water through the filtration and helps take away dead spots where fish waste was gathering.

The filter upgrade is by far the best thing I believe I have done. There are tutorials on making DIY baskets but for simplicity I went with INTank. They also include a plug for the middle flow hole on the tank, instead of allowing water to mix in from halfway below the stock sponge. I have read that the stock sponge becomes a Nitrate harboring refuge and when I took it out you could see different color growth on it, In my opiniong changing the filter floss is much easier than cleaning the sponge.

I also wanted to stay on a tight budget, but I have found it difficult to 1. Keep the temperature down 2. Provide the flow and filtration that I would require for the livestock and corals that I will be bringing into the tank. With the stock hood and light I would stay at about 83 degrees, so I ended upgrading this as well. There are cheaper lights, and cheaper ways to handle the media basket to help keep the price down, because when I look at how much I am spending I wonder why I just didn't get a larger tank (Maybe 30g).