Lowell Lemon said:
Looks great! Soon the tanks will be set up. Someday I might get around to setting up my tanks. So I am here looking for inspiration. Well done!
Click to expand...

Thanks so much bud! it makes it all worth it.

One other thing, the break box cover is indeed crooked. The box itself is level and plumb. I have no dang idea why the cover is so off. I think I will oblong the holes with a die grinder so I can twist it a bit.
OP

Got a bunch of cleanup done today. Everything is to where the tarp or drop cloths will cover it.

I got the caulking done as well.

Tomorrow and Tuesday I scrape the ceiling and Thursday we go pick up primer and paint. I am going to take my colorblind glasses and actually attempt to pick out the colors. Sherry will be there as backup of course.

I have amassed a collection of different Kessils and was planning on using this hodgepodge on my marine tanks sort of like I am now but on the tanks going in the room. I just can't get the color I want and have three different ways of controlling them and just am not happy in general. Other than the shimmer which I love.

So, I am trading almost everything thing to a buddy for a total switch over to some lights I tested and sold and wish I hadn't. Smatfarm. Yes, you read that right. I have tried every brand including two different generations of Radion (these are awesome just too expensive for what I need), Kessil, AI (really almost switched to them), Noopsyche(loved these, hated the controller), etc. Given my tastes, the growth and coloration I saw, all being controlled the same and price, I have decided to switch. Now, if money were no object, I would be going with Orphek Atlantic but that's just silly for my setup.

Say what you will, but, for any light under $500 these things beat them all, in my opinion anyway. If one goes bad or I damage one, they are inexpensive enough to order another. And I can keep an extra on hand just in case. Not many lights you can afford to do that. (well for those of us who live in the real world anyway )


The only thing that sucks is 5 of them I don't need the brackets for which would bring the price down even more if they had an option of light only.

Plus, they are on Prime day which saves my buddy even more money.

For now, the two 30"x30" tanks will have an a160we on them. The one will also have a white light over the mangroves as well. The frag will also have two a150 deep ocean blue. But, eventually, these tanks will switch to the smatfarm light as well.

The RSR625 is going freshwater because something came up with the room and how much space I can allot to FW tanks. I am going to be starting testing even more various maker equipment and I have to make the desk/bench larger for equipment. This leaves plenty of room for the RSR but not the 75 and the 55.
OP

lots of maintenance today. Three skimmers cleaned, media reactor/canister filter cleaned, glass scraped on two tanks, remounted a couple frags because an urchin didn't like what they were attached to before.

Also cleaned the 75's refugium light and glass. And filled all the top offs.

I still have to finish scraping the ceiling in the fish room (got too busy this week) and get the stuff off the top of the fridge in the room and take my wife to dinner and pick out paint.

I am also ordering a new canister and inline heaters for the freshwater tank today.

Has anyone ever removed the overflow from a red sea reefer? Just wanted to know if there are any gotchas like everything else to do with red sea tanks.

Purchased the paint and primer last night. Hopefully, will at least have primer done this weekend. I would love to have the paint done so I could start setting up tanks next week.

I still have to build 3 stands, modify the 625xxl, build the two frag tanks, build the desk and remount the ceiling lights after painting.
OP

Scraping done! I did the entire ceiling (14x23) with a 4" scraper! My shoulders hate me now.

Rest for a bit and start priming.

Fast and furious now. I really would love to have all this done by the time we go to the beach first of September. I think the original goal was April but, COVID twice and a stroke changed a couple things.

I really appreciate the encouragement from you guys. It really does help.
OP

BTW, I pulled the engine out yesterday and made sure it was still ok after sitting all this time and, except for a few spots of surface rust, it's fine. Turns over with a ratchet easily. I went ahead and put some more assembly lube on everything and used scotch brite to remove rust.

I should be setting the engine next weekend as long my help shows up.

FYI, the minisplit has a humidity setting, so the fan shouldn't be needed. I have a 10×13 room built in my garage. Framed the walls in 2x3 then 3 inch foam sheet board
I use a 12k 110v minisplit to heat and cool it. This is in South Texas whare my garage hits 130 inside at times. Minisplit easily handles this.

Shooter6 said:
FYI, the minisplit has a humidity setting, so the fan shouldn't be needed. I have a 10×13 room built in my garage. Framed the walls in 2x3 then 3 inch foam sheet board
I use a 12k 110v minisplit to heat and cool it. This is in South Texas whare my garage hits 130 inside at times. Minisplit easily handles this.

Thanks for the input. I did see the setting. Guess I will just use it.
OP

I got the first coat of primer on the ceiling: 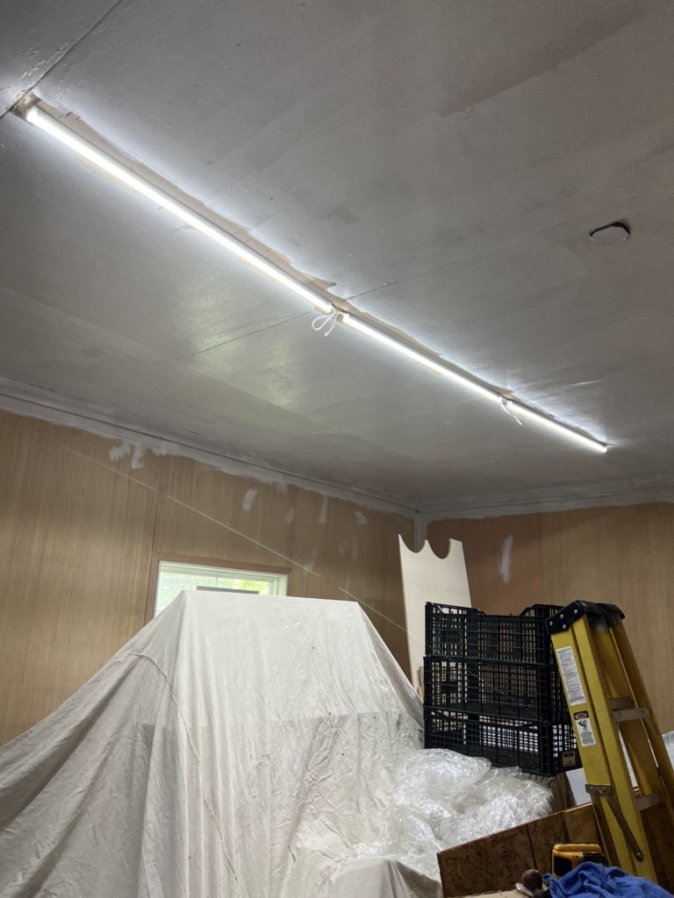 My shoulders are shot for the day.

Tomorrow is second coat on the ceiling and a coat on the walls. The walls will only need one coat. The ceiling had two different colors of paint on it so it needs two.

dantimdad said:
Thanks for the input. I did see the setting. Guess I will just use it.
Click to expand...

It works well for my room. Keeps the room at 77 degrees constantly.
OP

So I set the mini split on dehumidify for an hour then on 75 and it's way cooler in there than it was yesterday on 72 and it's hotter outside today. Thanks @Shooter6 ! The water was pouring out of the drain outside.

I just finished the ceiling except for where I have to take the lights down. That will come after the walls are complete and I move the tanks out of the center of the room.

I dumped a coffee can of primer on the floor. Dangit!

We also decided to paint the brick the same color as the other walls to blend it in. It's going to be hard enough to cover it without making it a focal point.

Rest for a bit then finish priming the walls except for the brick. I have to move a bunch of stuff before I can do all of it. But it will get done today as well, I think.
OP

all the priming is done except for the brick. Still have to move stuff around. 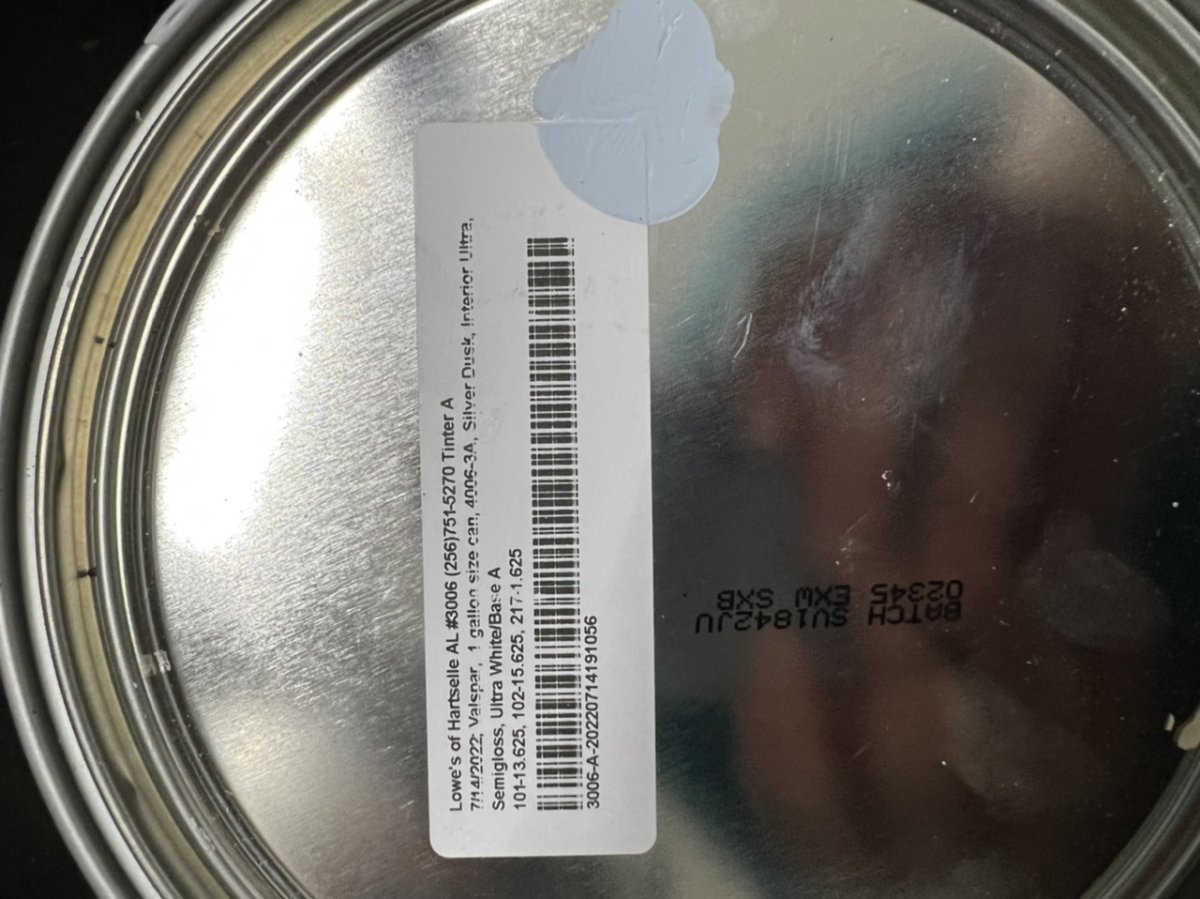 Ok, I’m old. I don’t have the energy to prime the brick tonight. It’ll keep until tomorrow.

I did get everything moved out do the way and the mess cleaned up though.

New lights will be here next Sunday.
OP

I wound up having to use a brush on the brick to get the primer to cover. I only got half done tonight. Finish it tomorrow and then Thursday start the blue. Still on track to finish painting this week and move the tanks against the walls.

oh! My buddy said my lights came in today. He's bringing them out Saturday. Just in time to miss all the painting fun! Imagine that!

I have built a water change station but, it's not big enough for emergencies, should one arise. I have an extra 55 gallon drum that has a screw on lid that I have mixed saltwater in before and thought about keeping it full of saltwater as well. So, the question is: If I keep it aerated, how long can I safely store saltwater?

Never been faced with this before. I always mix and use the next day.

BTW, I have two RODI units I will use 100gpd and 150gpd both with boosters with auto flush. So, making up water will be no issue at all.

dantimdad said:
I have built a water change station but, it's not big enough for emergencies, should one arise. I have an extra 55 gallon drum that has a screw on lid that I have mixed saltwater in before and thought about keeping it full of saltwater as well. So, the question is: If I keep it aerated, how long can I safely store saltwater?

Never been faced with this before. I always mix and use the next day.
Click to expand...

I have had 500 gallons sit for 4 months in the garage with no issues. I keep a large simplicity pump in it and it is always on. It sits directly in the middle of the container and has a pipe attached to put the water outlet about 1' from the surface. This keeps the water moving and does provide some air exchange. The container is also mostly sealed with only a small vent on one side and that vent has a carbon filter pad zip tied to it lol.

Also, if you every have an emergency, I can load 150 gallons up and be at your house in 1.5 hours max lol.