dantimdad said:
I am going to need a larger skimmer. It will need to handle a medium to heavy bioload at 400+ gallons.

The biggest I have is a curve 9 elite. Won't handle it unfortunately.
Click to expand...

I am seriously considering one in the corner.
OP

I just came a hare's breath away from smashing into the RSR 625XXL with a hand truck!

I am going to halt everything and start on the stand for it tonight so I can get it off the low sitting dollies it's on before I ruin it.

Started ripping up the parts to the rsr625xxl stand but got too hot.

I worked on this: 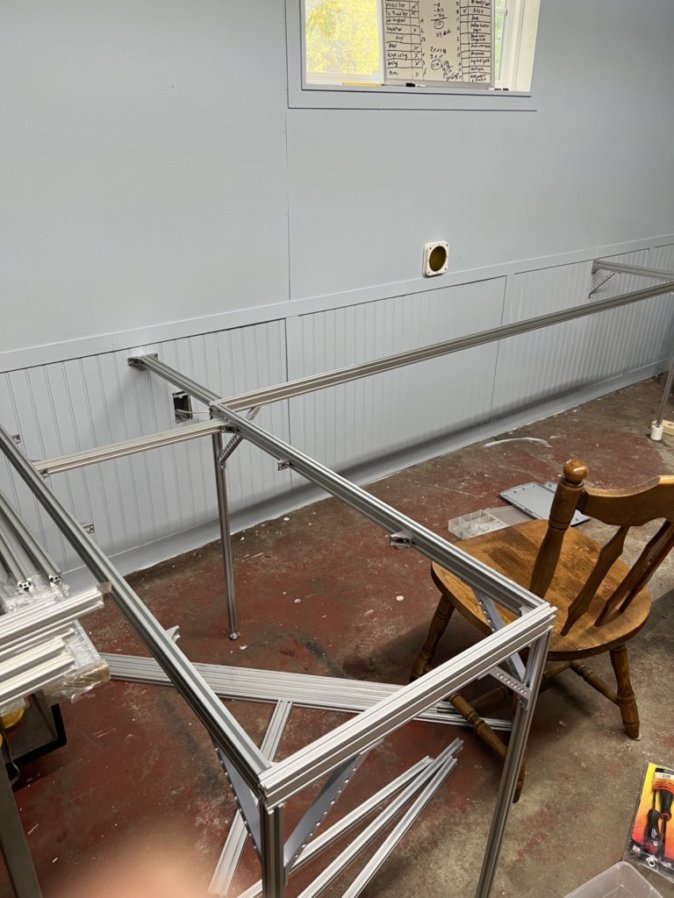 Almost ready to put the top on it. it will be inset in the frame.

I have to cut one of the cross pieces 1/2" shorter. I have no idea how I cut it off by that.

Anyway, the desk is 10 feet long on the long side and 5 feet long on the short side. Should leave plenty of room for my computer and 3 printers. The wall will have a 10 foot long filament rack on it. That'll hold about half of the filament I own.
OP

Desk frame complete going to get the melamine this weekend.

strips all cut to width for the rsr stand. Will have a long session at the miter saw followed by a longer session of pocket hole drilling after that tomorrow evening. Saturday I will assemble the frame before going to the autism fundraiser.

I should be able to prime the stand Saturday evening.
OP

The basic stand for the red sea reefer is done except for the top and stain.

I am going to do it gray and make 2020 doors with gray panels in them for the doors.

I am pretty stoked on how the stand is turning out. It is under 1/8" out of square and the top will pull that into square because it's inset flush. I have yoga mat for the top sort of like the old RSR stand had on it. Just this stand has more room and is way stronger. 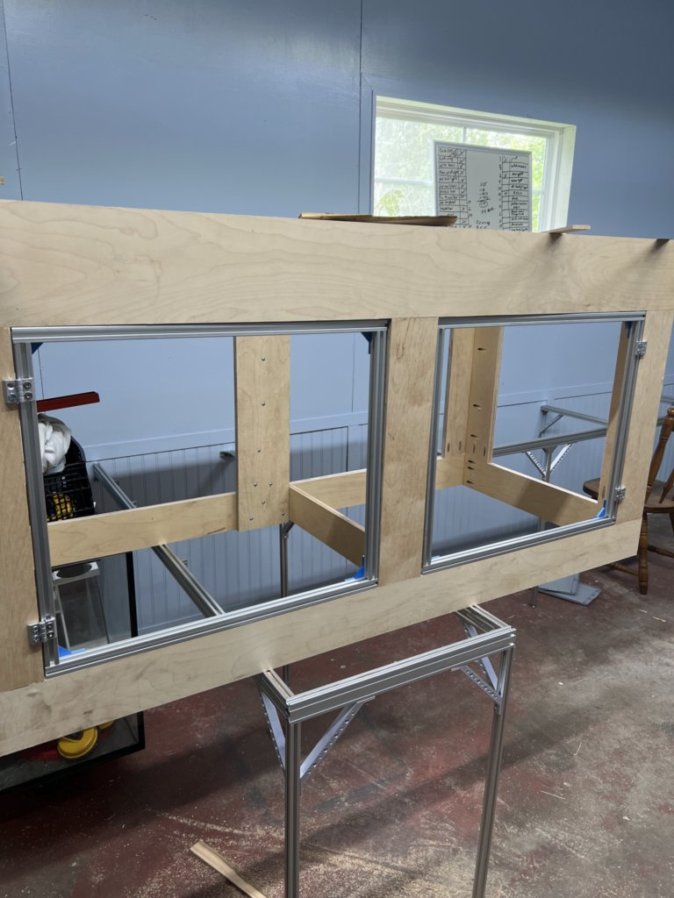 I have to figure out door stops and am printing handles.

I also need one more cross piece on the bottom.
OP

BTW, that will give you an idea of just how strong the desk is.
OP

Door stops done. Top on, fit perfectly. Handles printed and installed. Yoga mat glued on top. Side panels installed. I forgot the door panels at Ray's. Will grab them and finalize the fit tomorrow as well.

I am having balance issues so done for today.

Tomorrow I will do a light sanding and stain/poly it. Sherry bought the stain today for me.

I have to clean up the mess before I can stain anyway. 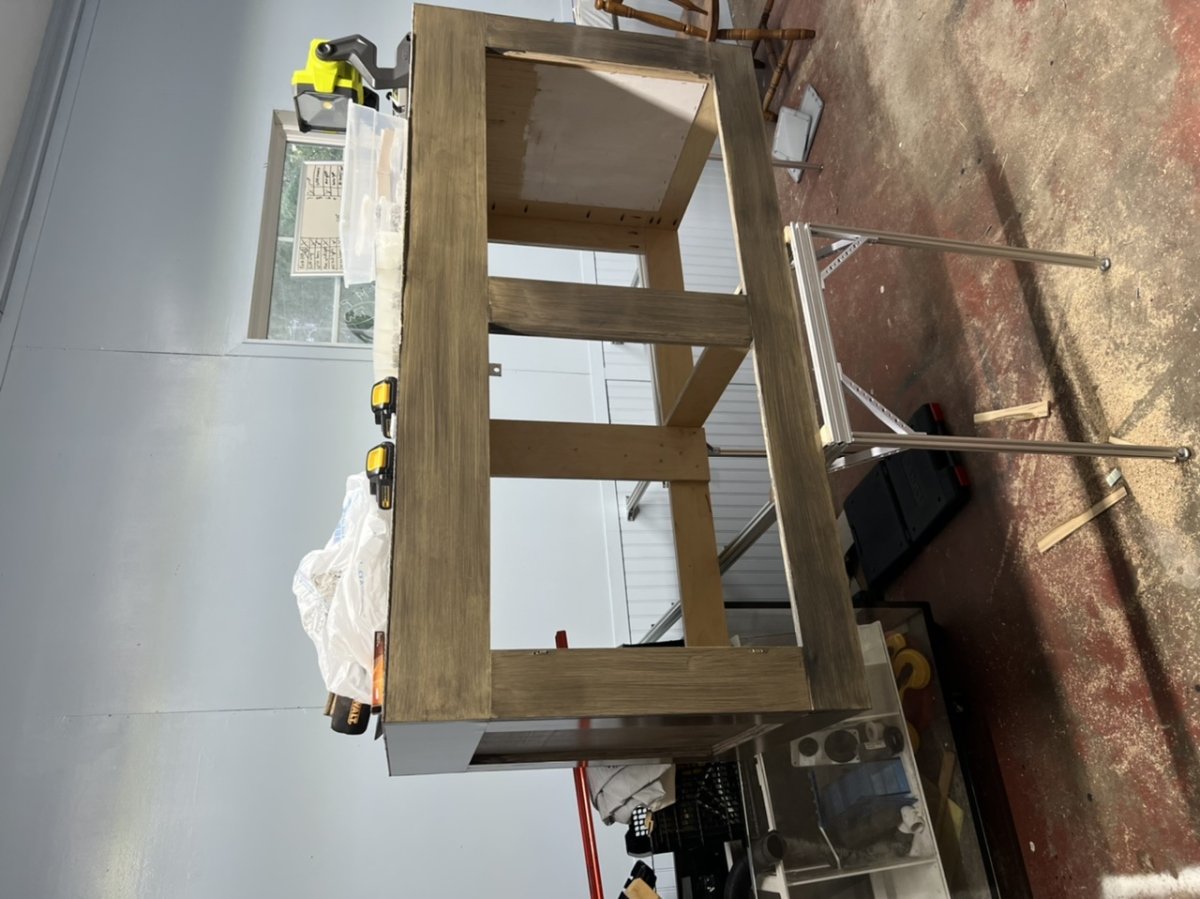 two coats of gray stain and polyurethane.
Click to expand...

Decided to go with one stand for several reasons. But mainly to get the tanks all on the same plain without having to do some really weird shimming due to the floor being so off level. With three tanks it would take a bunch of work to get them all flush with each other.

The 187 will be in the center and be open. No middle leg. The frag tanks will each have a door and possibly a shelf or two inside for storage.

One thing I have always lacked in this house is places to store things. I plan on using the entire underside of the 12 foot tank and both frag tanks to store stuff. I will also rearrange the storage closet off the room because it's mainly full of stuff that will get used on this room and my truck. For example, I have over 300 pounds of aragonite, 7 buckets of salt and an aluminum radiator and a ton of other parts in the closet.

Hey @Eagle_Steve got any thin wall pvc laying around at least 6" in diameter? I am thinking about building a tall (6 foot) recirc needle wheel skimmer with forced air. Finding thin wall around here is like hen's teeth.

dantimdad said:
Hey @Eagle_Steve got any thin wall pvc laying around at least 6" in diameter? I am thinking about building a tall (6 foot) recirc needle wheel skimmer with forced air. Finding thin wall around here is like hen's teeth.
Click to expand...

I have to go out to the barn this afternoon, so can look then. If I do, it may be green.
OP

Eagle_Steve said:
I have to go out to the barn this afternoon, so can look then. If I do, it may be green.
Click to expand...

The color doesn't matter, besides, krylon fusion fixes everything!

The 625XXL stand is finished. I am convinced I am going to make the other new stand match and, over time, the 12 foot stand as well. 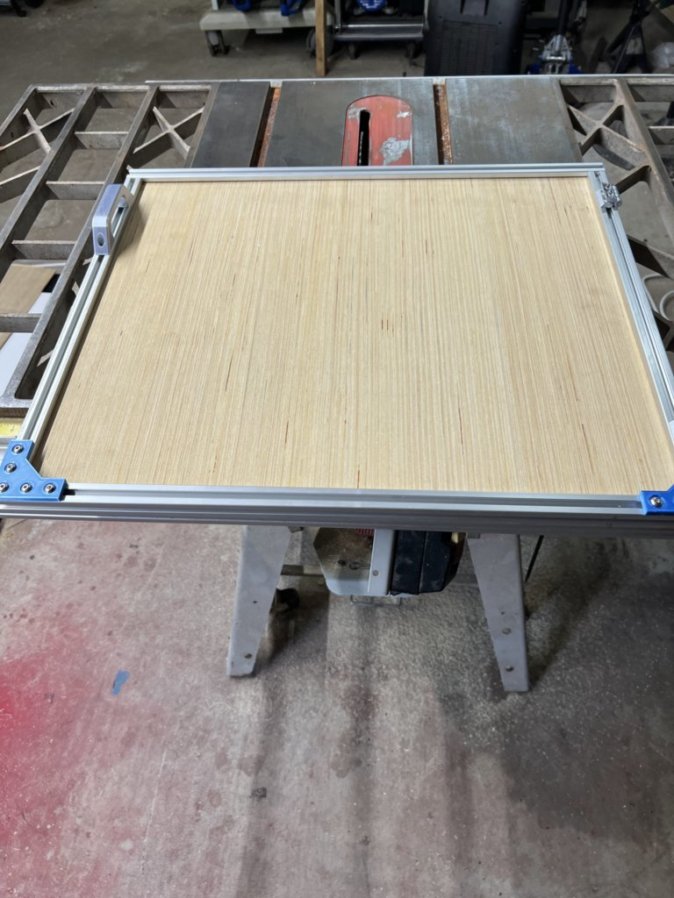 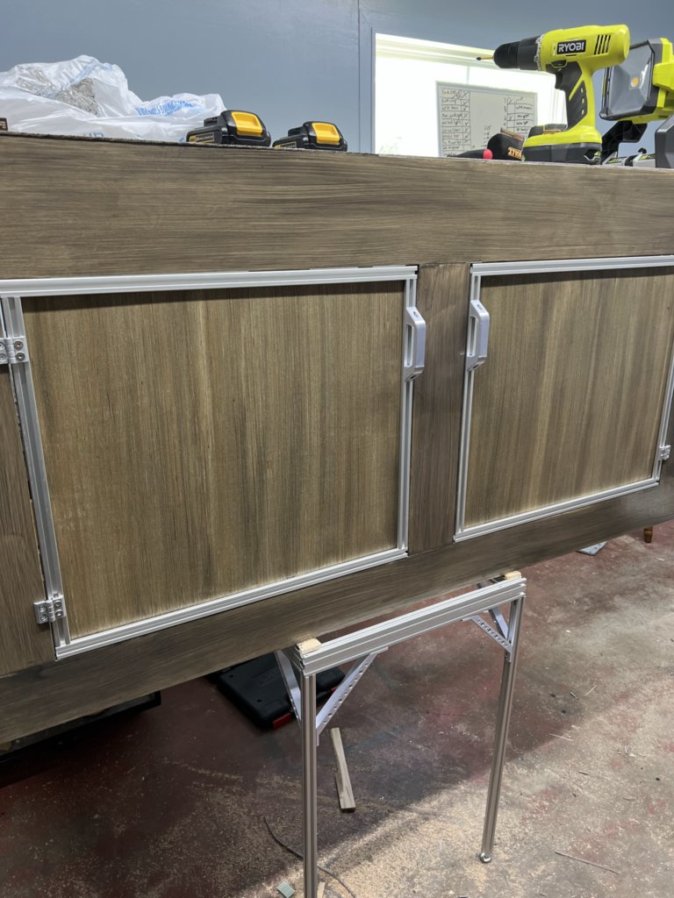 For those interested, I found the paint swatches for the wall colors. lol 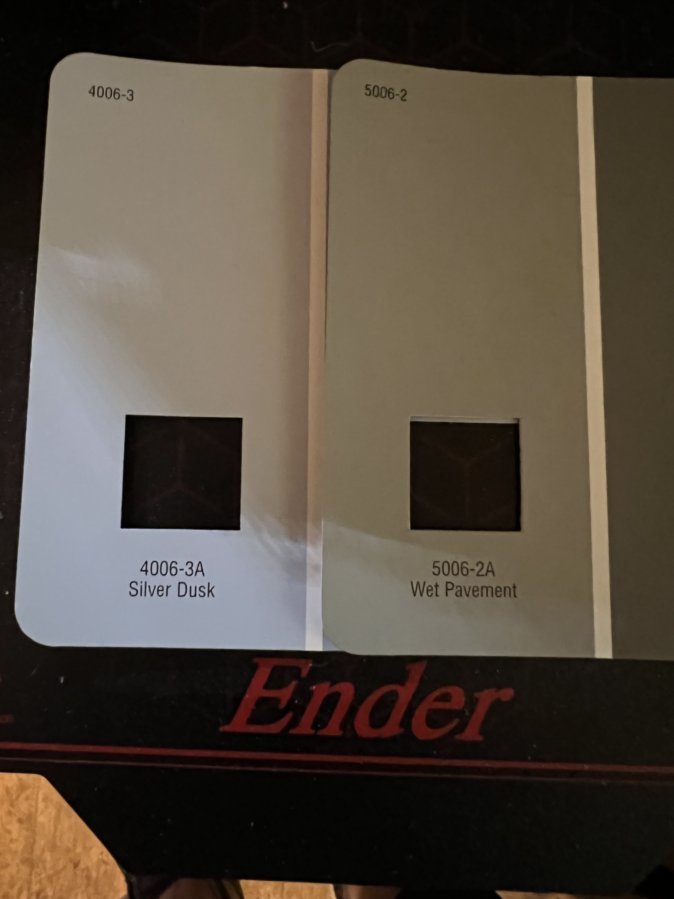 The stand is on the floor and it looks like it won't take much to level it.

The overflow is out of the 625XXL: 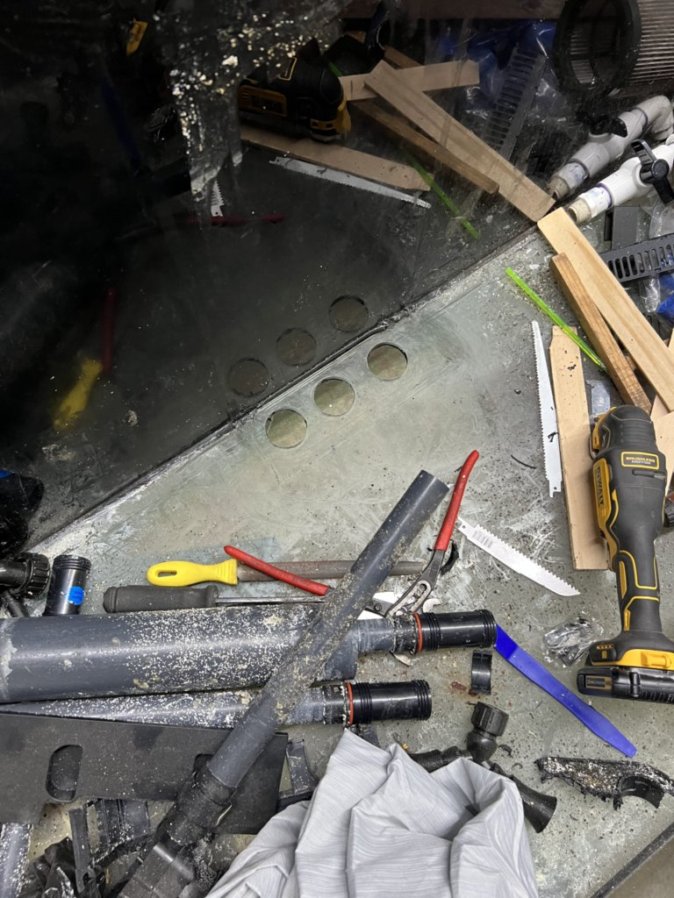 It appears the put the overflow in after assembly so I won't have to reseal the whole tank.

The stupid adapter plate thing on the bottom was a ridiculous pain to get out. Why can't they just use bulkhead fittings like everyone else?

Anyhow, I will give it a good scraping tomorrow followed by acetone followed by a 1/4" thick glass patch over the whole area put down with a ton of ASI sealant.

It will then officially be a rimless freshwater tank.

I also got to work designing and building the light rack for the red sea tank. It's almost done except a couple brackets I am printing.

I figured out the mount for my smatfarm lights. Designed in TinkerCAD and printed on my ender 2 pro. 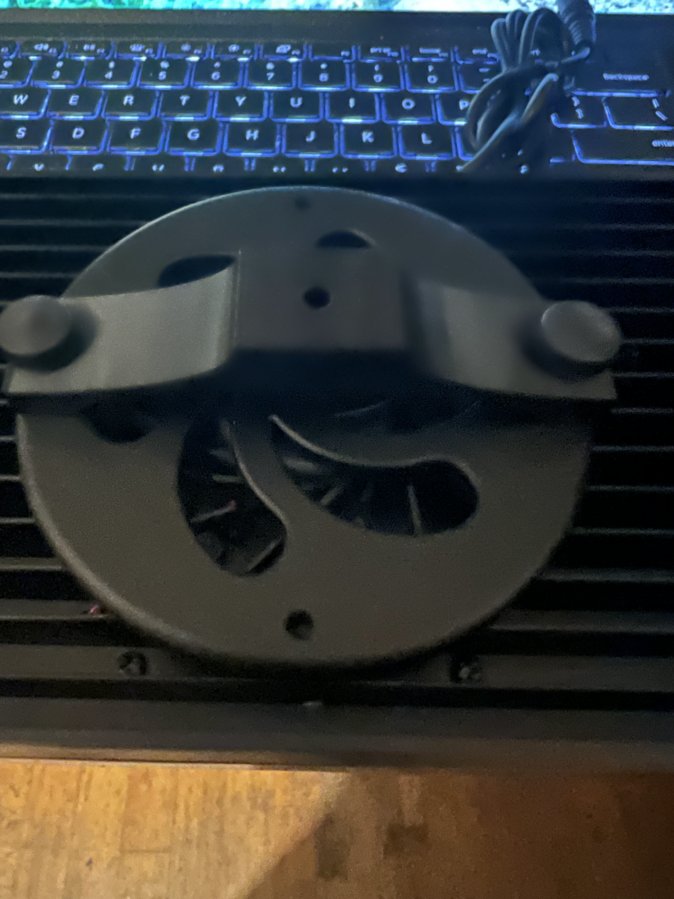 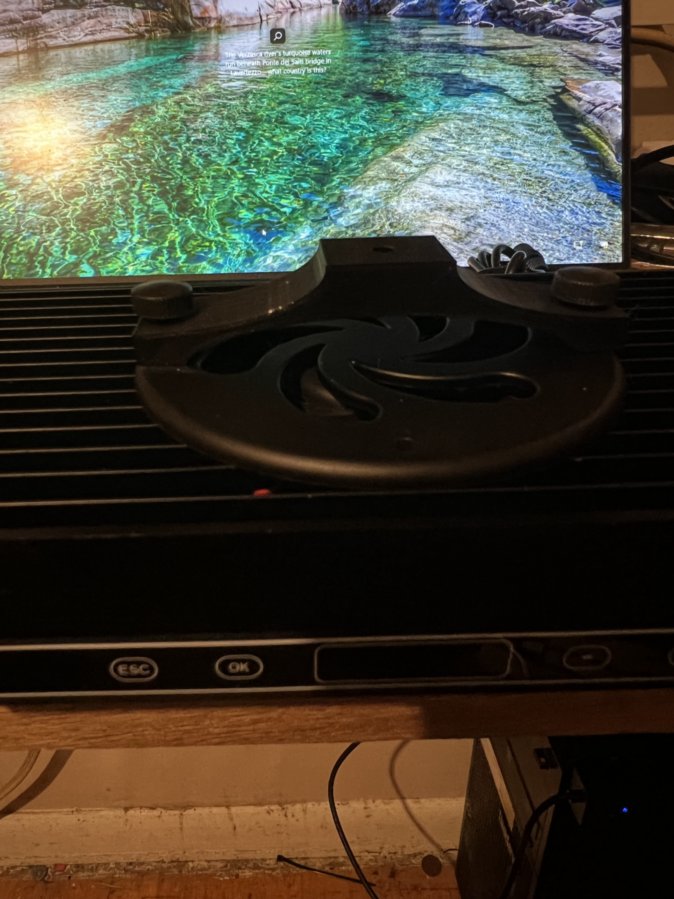 will work out nicely with the light rack on the 12 foot and the one I am building for the other wall of tanks.

@dantimdad no luck on anything larger than 4" pvc. I know there is a piece of 8" somewhere, but cant find it lol.