It's been two years since I took down my last tank. You can see the details of my previous build here: https://www.reef2reef.com/threads/ghosts-30-gallon-low-maintenance-mixed-reef.420751/

I've decided to reboot, determined not to make some of the mistakes of last time. Here are the lessons learned and goals for this tank:

1. I want it to look better, no cluttered equipment visible hanging behind the corals, no giant black box lights.
2. Live rock is the heart of a reef tank, I will use aquacultured live rock this time in hopes of cutting down on new tank syndrome.
3. I want a mixed reef with high density, that means good nutrient export, and lots of small peaceful inhabitants.
4. This tank will be on my desk, in my bedroom, it must be quiet and hopefully not spill.

I have also ordered a Tunze Recirculation Pump Silence 1073.020 and some soft silicone tubing to replace the stock pump. Already placed an order for 23lbs of live rock from KP Aquatics, it should ship Monday, weather permitting. 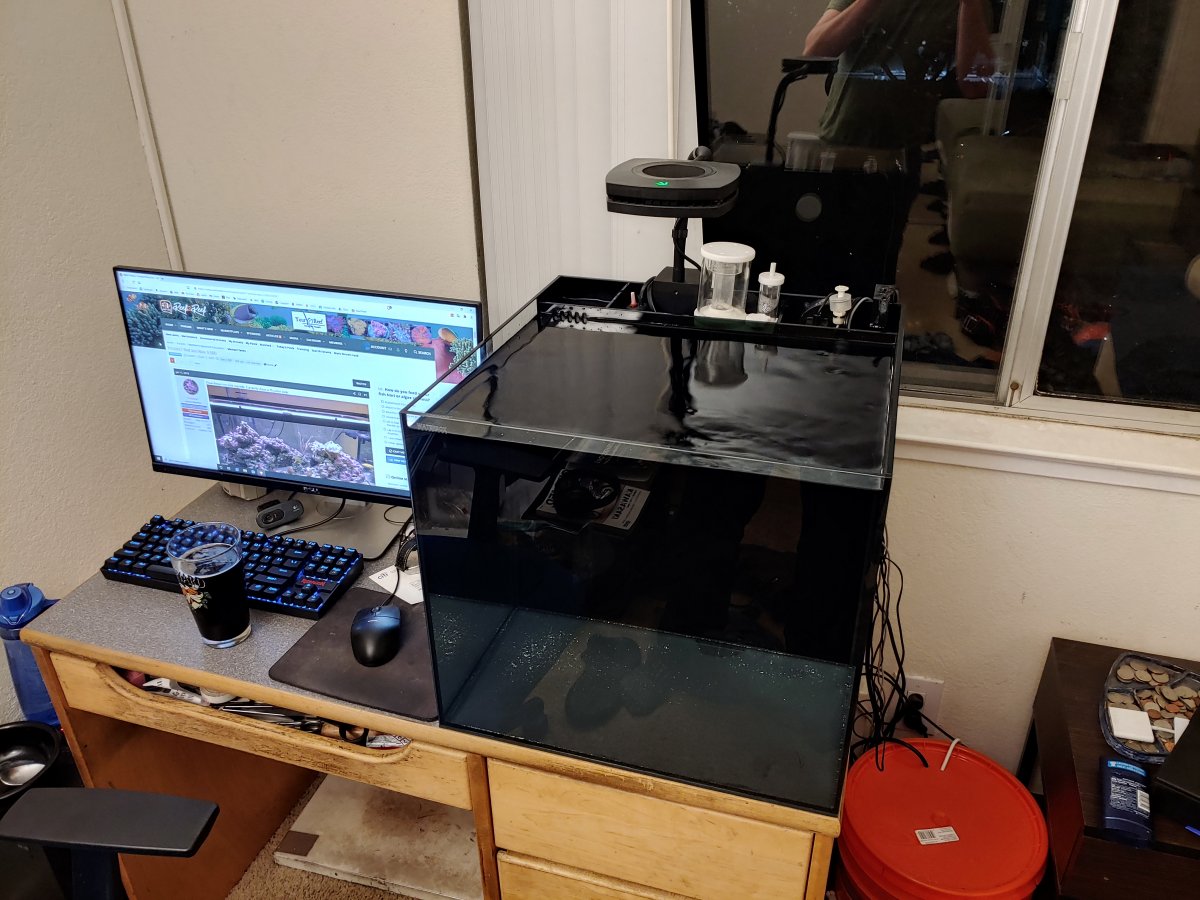 OK, two problems arose. First of all I turned on my light using the David Saxby program to see how it looked, and very quickly it became apparent that there was a problem. The spillover from the light was very intense and effectively blinded me. It doesn't help that there is so much blue and violet in the light.

User ludnix kindly provided a public STL file for a 3D print of a shade designed to solve this very problem: https://www.reef2reef.com/threads/ai-prime-hd-light-shade.615720/ . Luckily my housemate has a 3D printer so I should be able to print one tomorrow. Still it ticks me off because this is the light Waterbox sells for this tank, I'm sitting at a totally reasonable viewing angle and it's very unpleasant. I really liked the aesthetic of this light but I don't appreciate that in this situation it is effectively unusable without modification.

The second issue which I just realized is that the Tunze Silence 1073.020 I ordered uses 3/4" tubing but the stock pump uses smaller tubing (3/8" I think). The issue is that the return jet and corresponding hole are sized for the stock pump. So likely I need to get a 3/8" to 3/4" coupling adapter and use the stock jet. I suspect this will add resistance and reduce flow, though it should increase water velocity slightly.
OP

Well that's one problem solved. I printed the shroud out of PLA and it fits and seems to do the job of blocking spillover light. 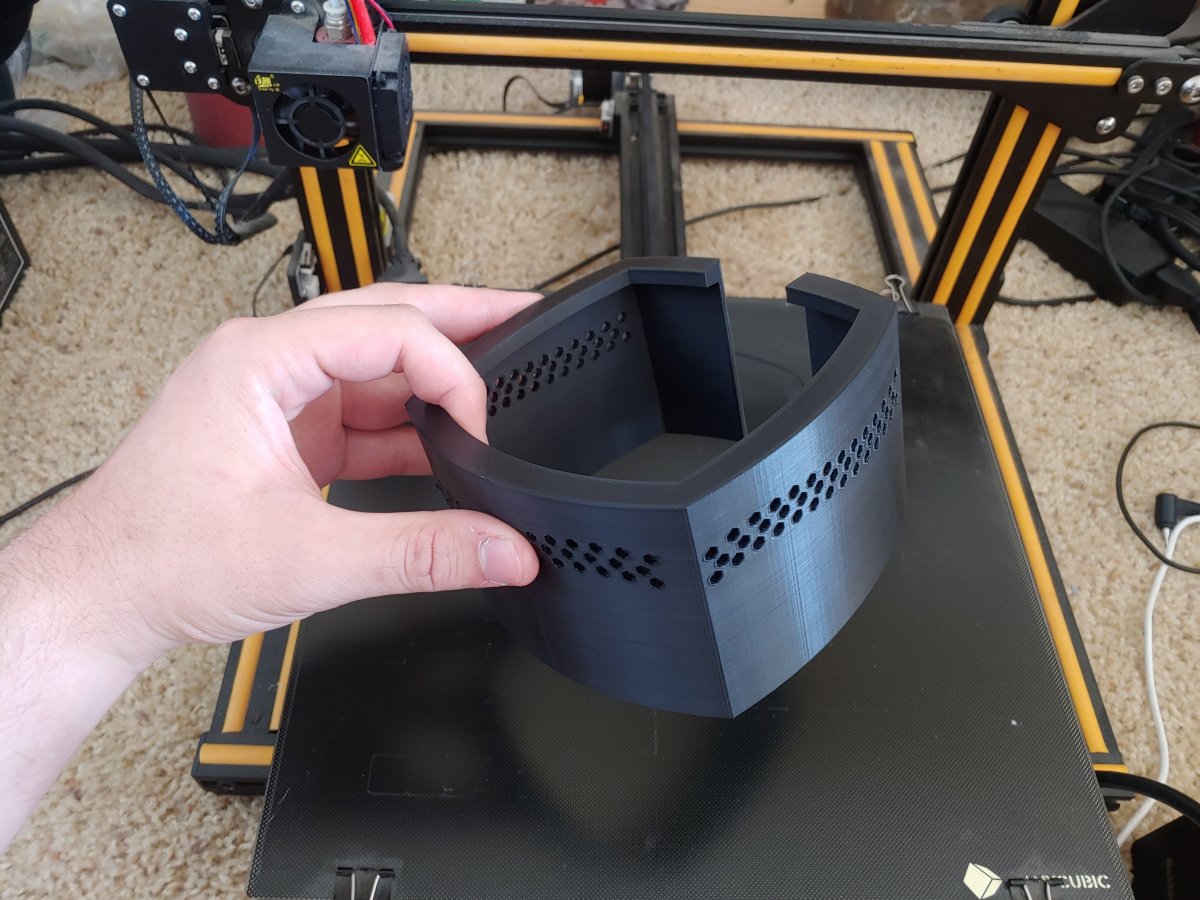 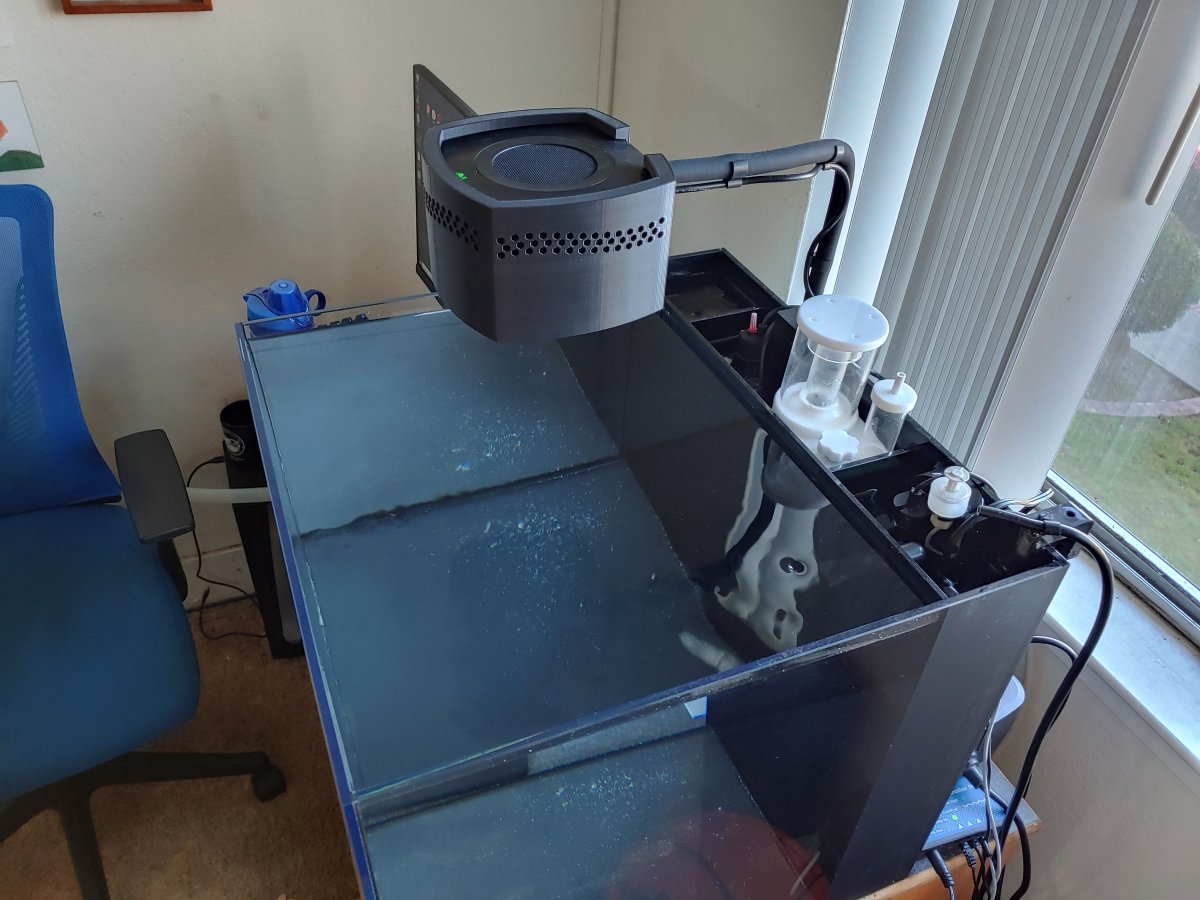 I got in some live rock, I did post about it elsewhere but I'll add it here to keep the build thread complete.

My last tank used Pukani dry rock and went through months and months of dinos, cyano, and epically hair algae. I will say the Pukani was very porous and had a great shape for aquascaping, but I was willing to pay to avoid the headaches of new tank syndrome if at all possible, and I love inverts and looking at all the little life in the tank. I have heard great things about Tampa Bay Saltwater but they are closed indefinitely so I went with KP Aquatics.

I got 23lbs of "Shipped in Water - UncuredLive Rock - Buyer is responsible for Airfreight Charges" because that was the best chance of getting everything alive and in the best condition. Total for the rock was $211.60. Picking up the shipment from Southwest Cargo was pretty straightforward, luckily I live 15 minutes from a major airport. Freight charges were $70.76 for a grand total of $282.36 or $12.28/lb.

Package had several inches of water in the bottom, no leaks. Two small heat packs which I don't think were big enough to do anything, smell was fresh and water was not too cloudy. Rock went straight into the tank. Initial impressions: to be honest I was a little disappointed at first, I had heard other people got crabs, urchins, and large sponges. I did not see anything large at first glance, although a clicking sound indicates a shrimp of some kind.

On further inspection there are some live feather dusters, sponges, coralline algae, maybe some hydroids. We'll see, I'll let the pictures speak for themselves. 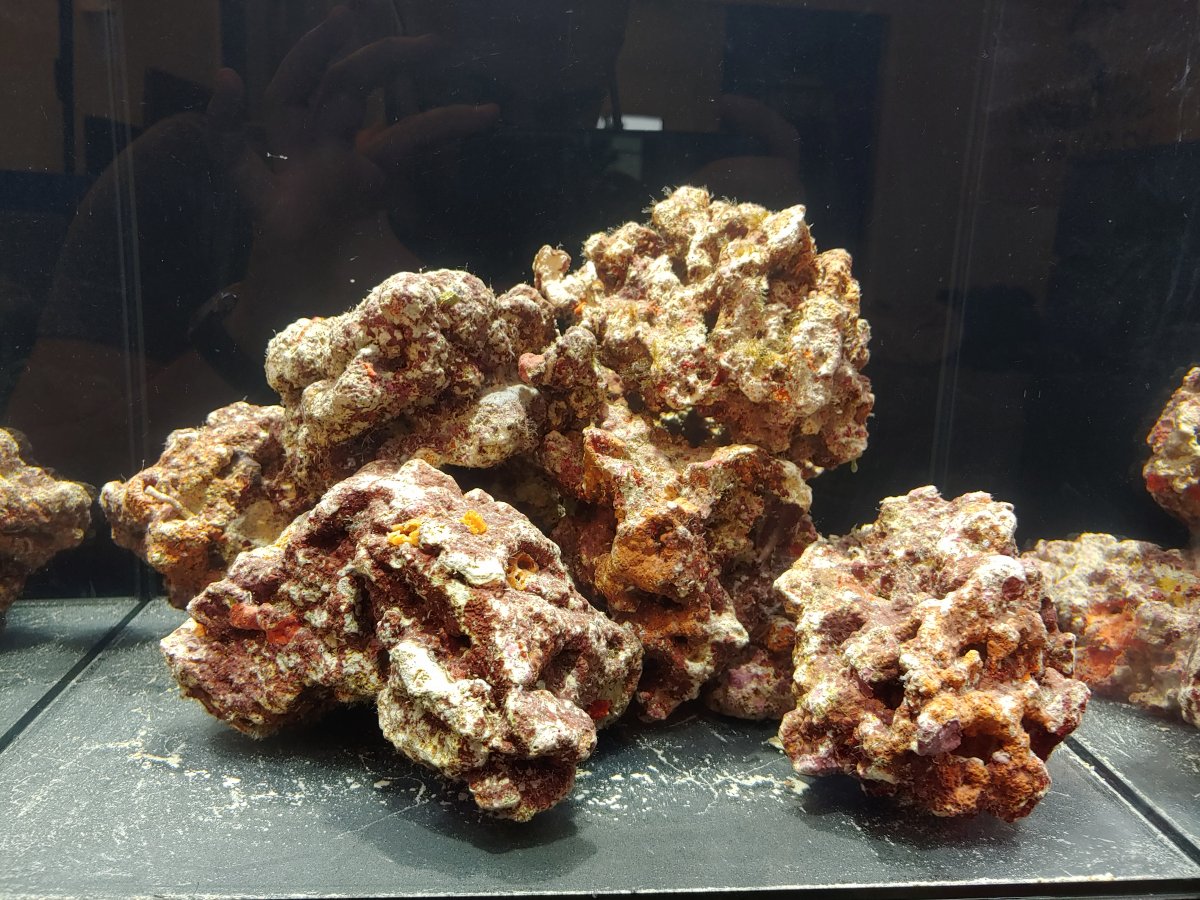 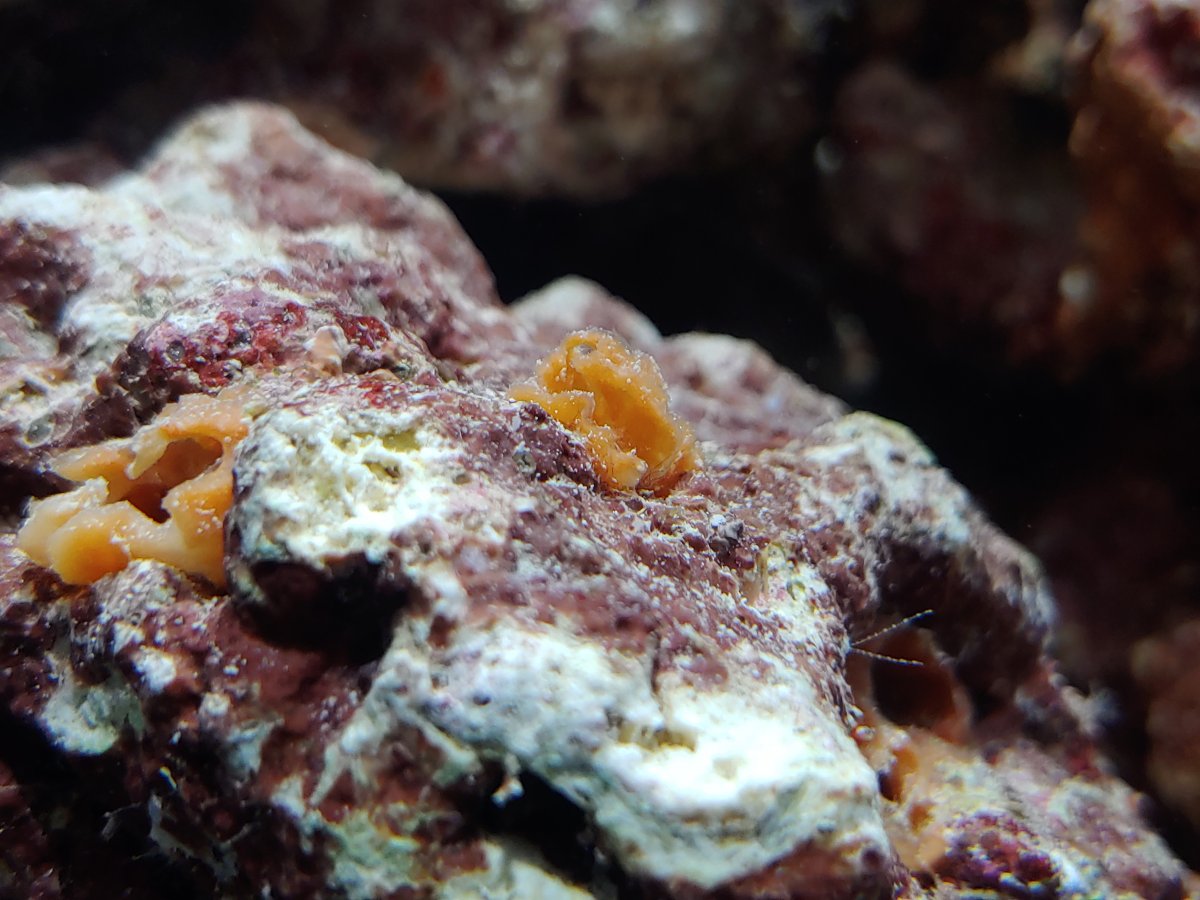 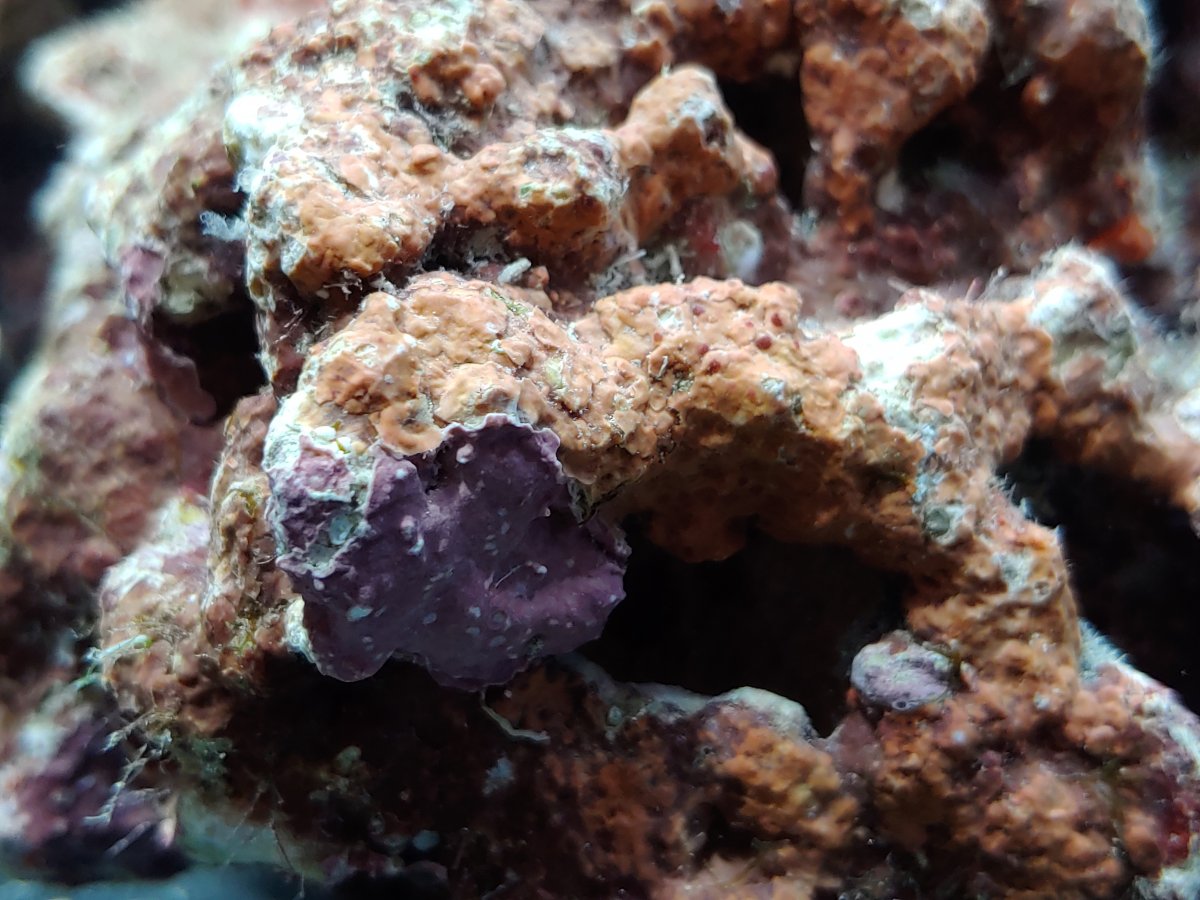 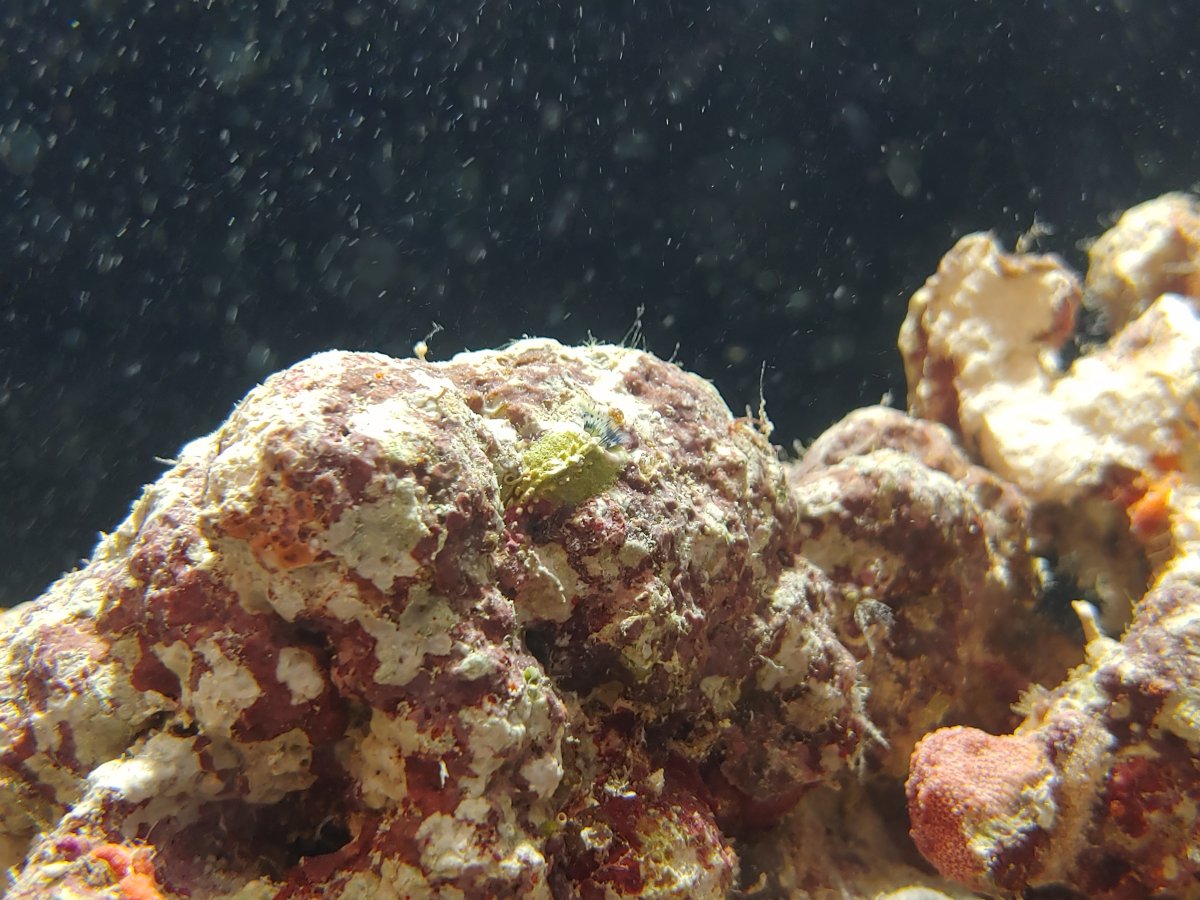 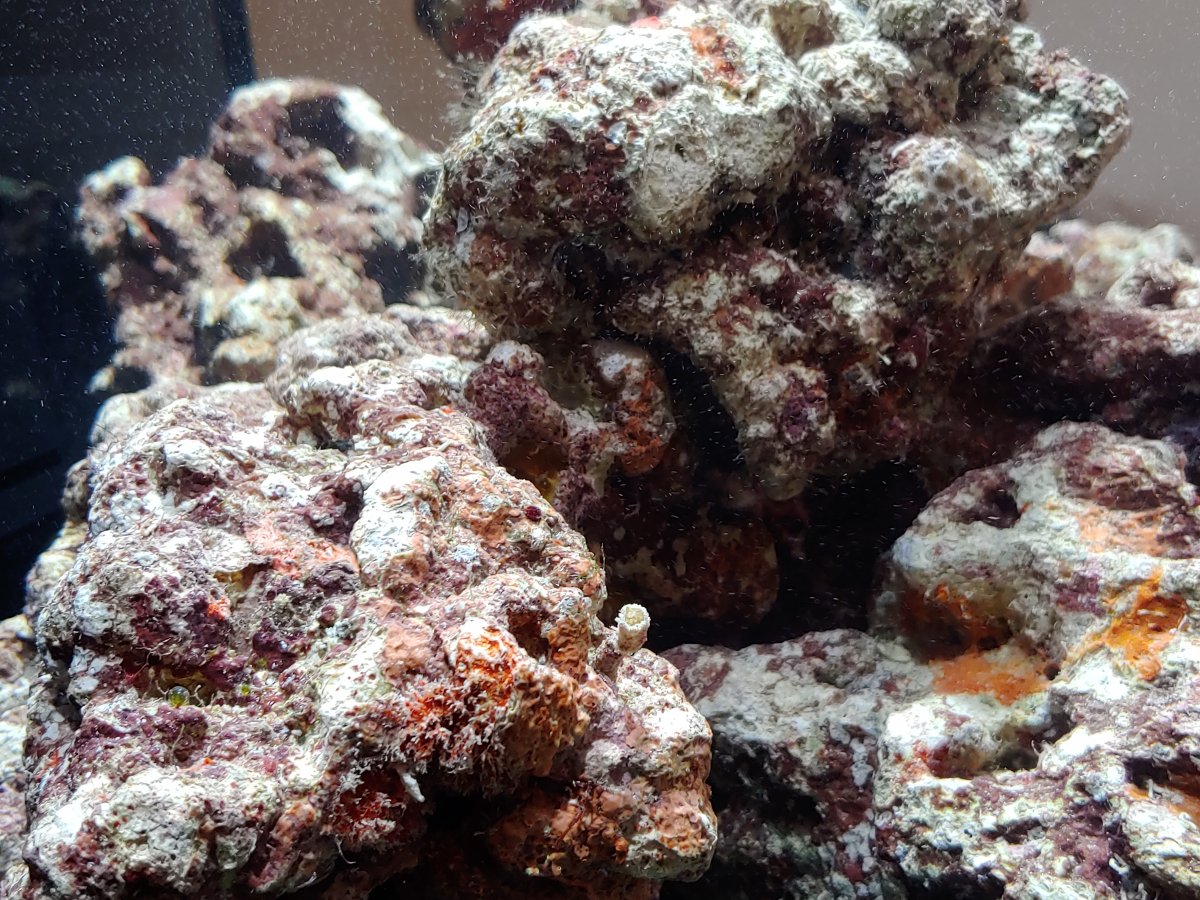 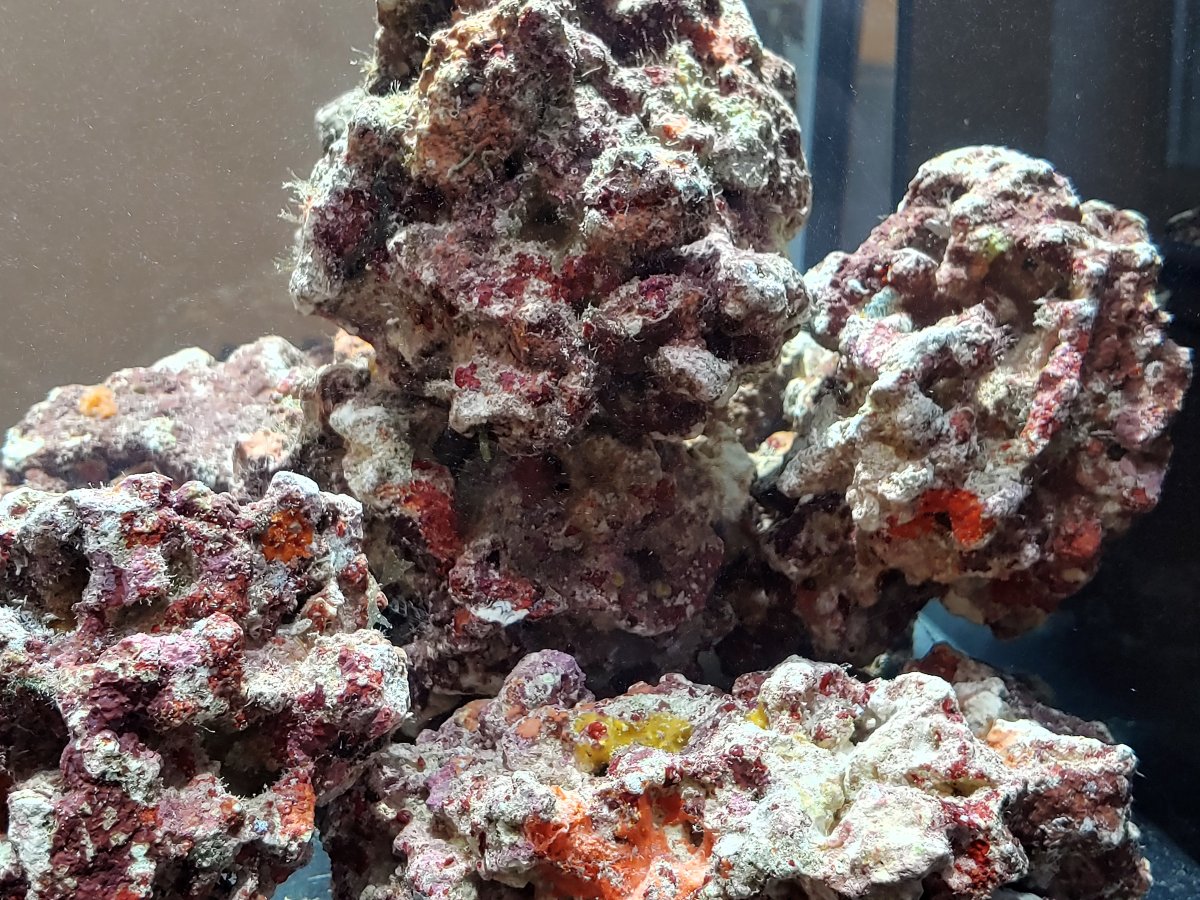 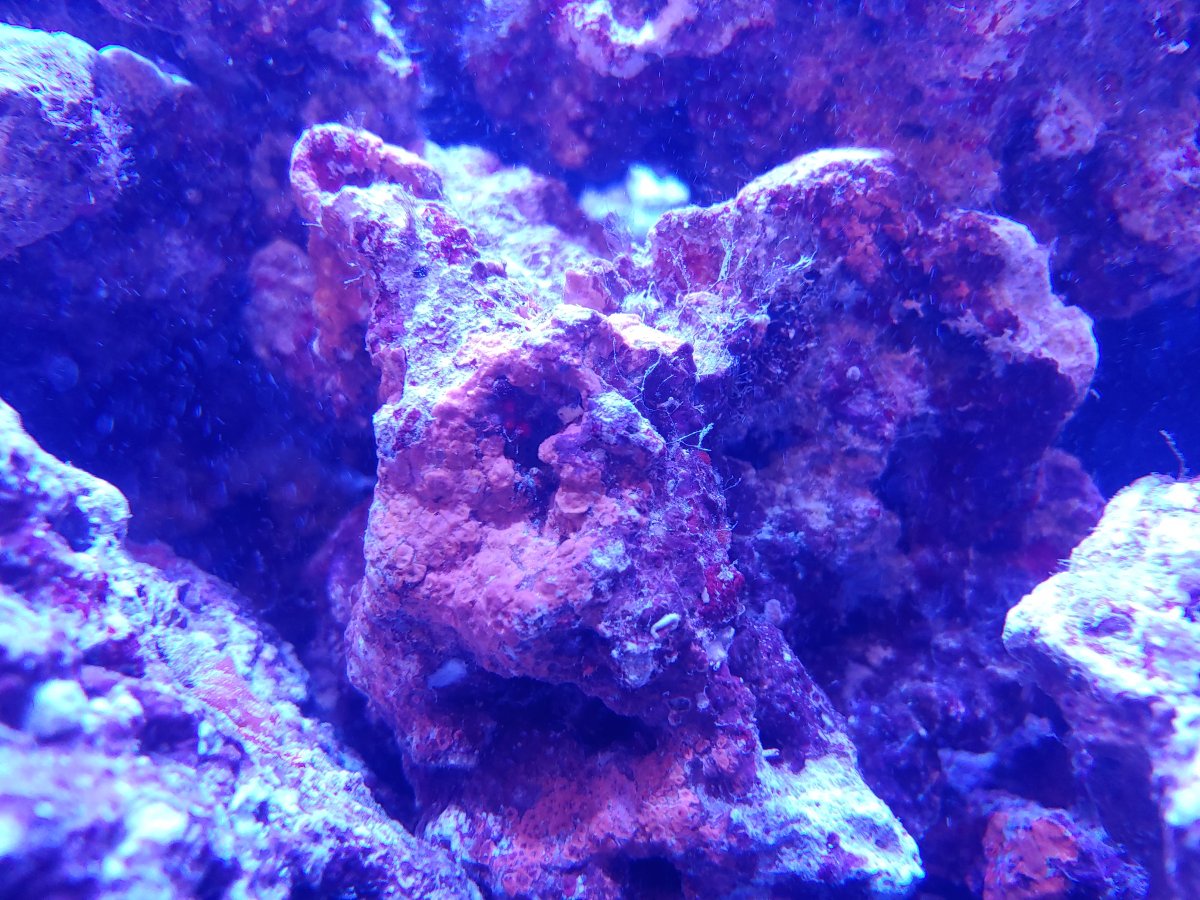 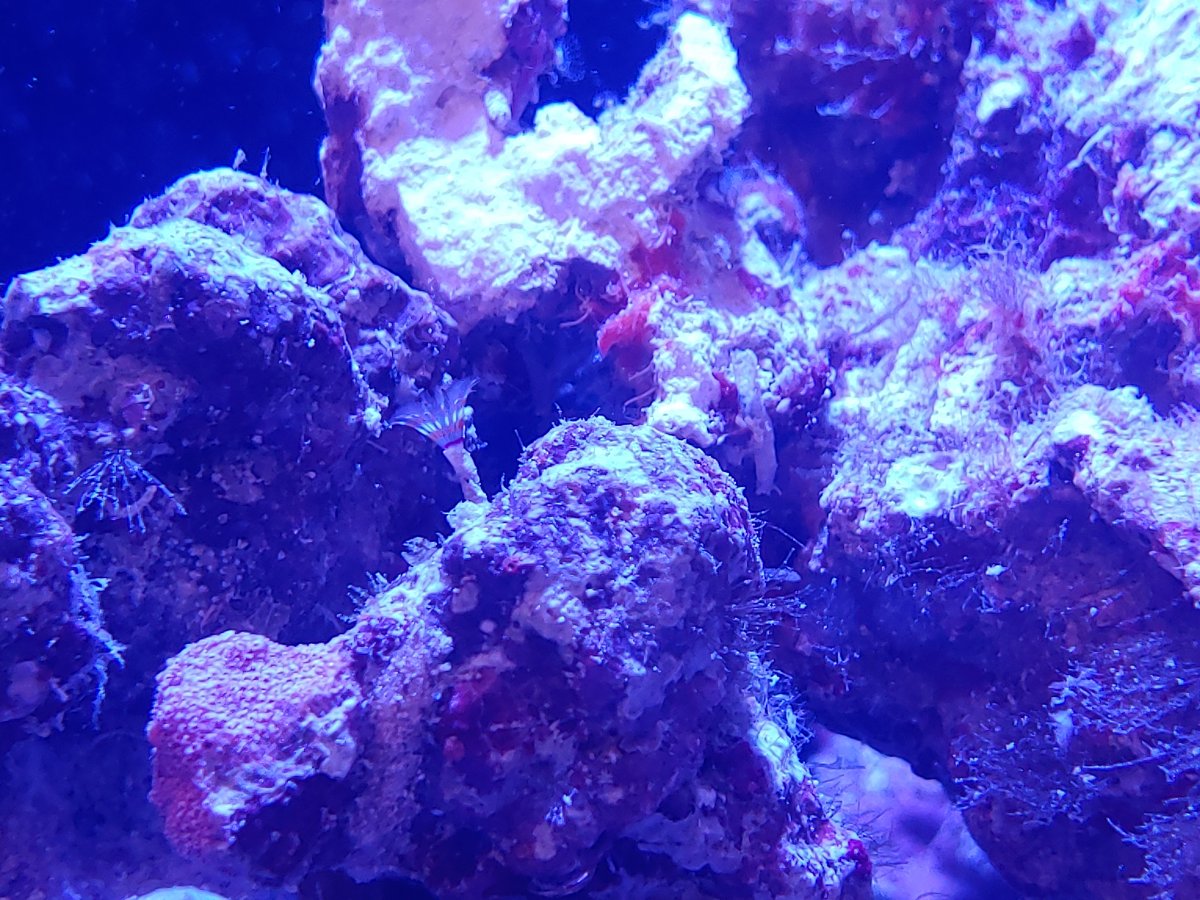 I have this same tank. Seeing that amount of weight on that desk is making me anxious

Awesome, thanks for sharing.

get a lid of some sort to help stop moisture from leaving and getting into your electronics. Also please be sure that stand can hold the weight
OP

M.X. said:
Seeing that amount of weight on that desk is making me anxious
Click to expand...

Alexreefer said:
Also please be sure that stand can hold the weight
Click to expand...

Thanks for the concern though.

It is likely more weight than that. The weight of the tank itself is 40 pounds + weight of your live rocks + sand. The rock and sand displace some water yes but they are much more dense than water, the tank is in my estimation closer to 200 pounds.

I am showing concern because I emptied my tank 1 week after I set it up and had to move it to another piece of furniture because I heard a loud snap in the middle of the night only to find a large crack forming directly on the underside of the wood on which my tank was on.

I've done two 5 gallon water changes since adding the live rock. Collecting a decent amount of wet skimate but it stops collecting for a while after each water change.

I shimmed my desk a bit because the water wasn't quite level. I did another 5 gallon water change yesterday and added sand. I'm using CaribSea Arag-Alive Fiji pink which I've used in the past with success. Sand settled quickly.

The inverts seem to be alive and everything looks good so I decided to add some fish. No ammonia/nitrite/nitrate testing this time but like I said, if feather dusters, crabs, and snails are happy I have no concerns for fish. I added a small Tailspot Blenny and a Ruby Red Dragonet. I had both of these species in my last tank and I really liked them. Acclimated for 20 minutes in bags and added them in.

My first go round I dipped fish and tried to quarantine but I found that stressed fish too much. 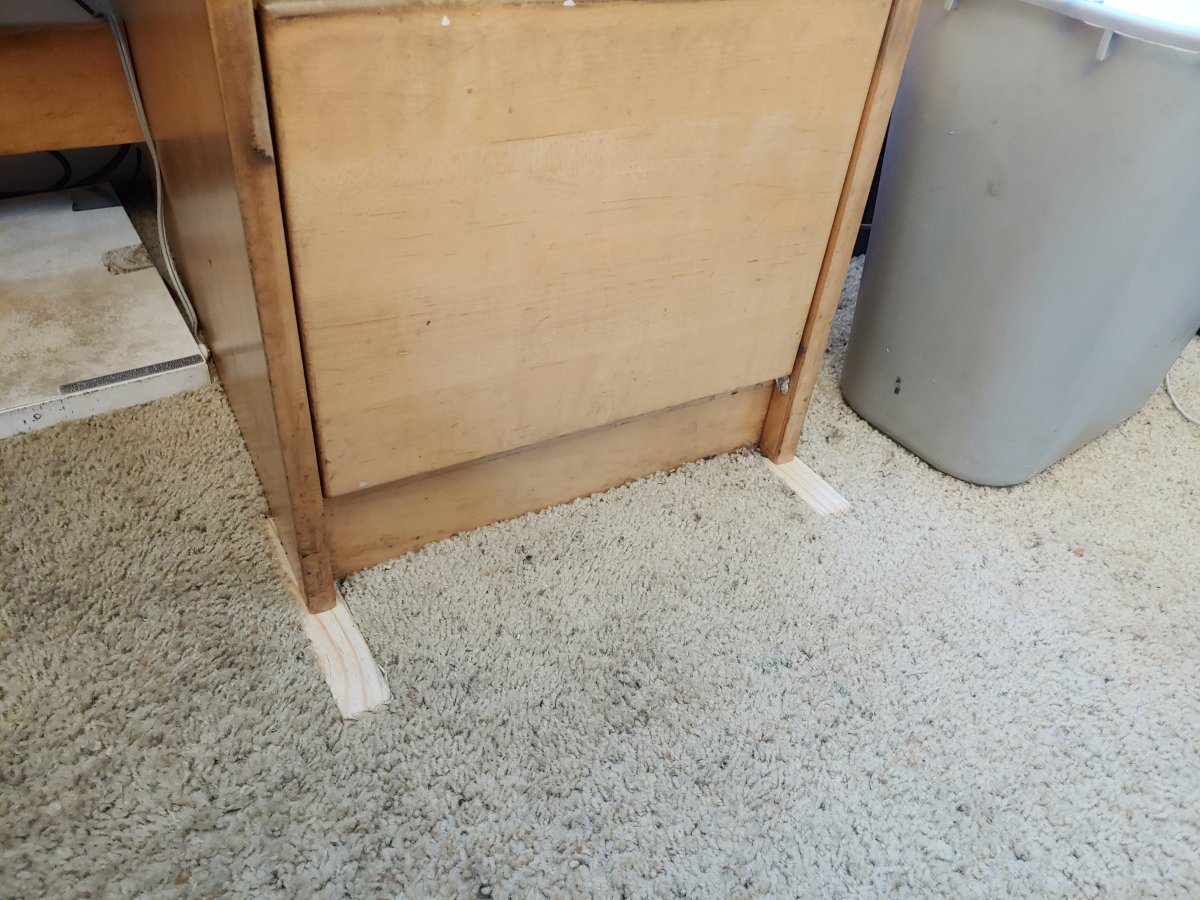 I'm not thrilled with the current aquascape, but it's ok. I can always change it but there's so much life I'm afraid I'll destroy it by moving it too much. 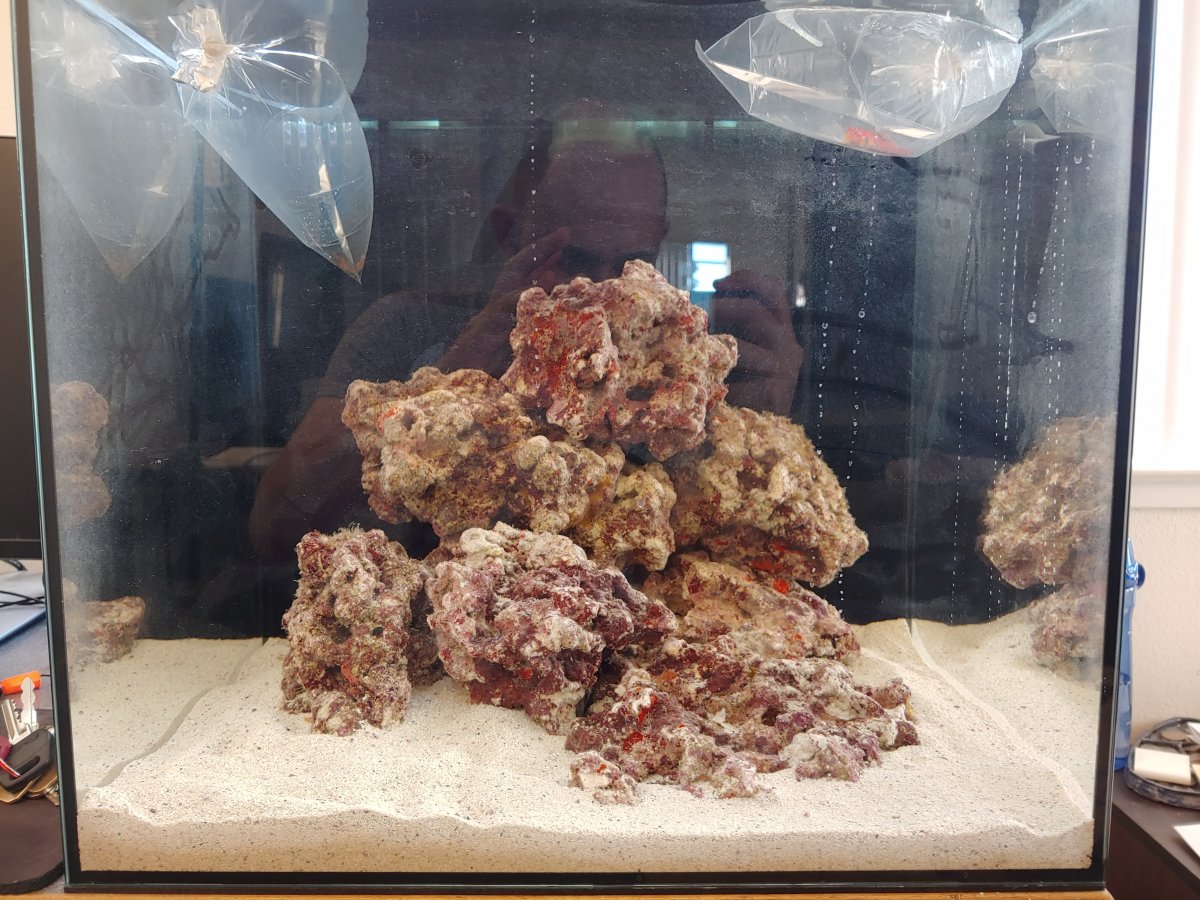 I love blennies, they're so goofy looking and the way they change color is cool. 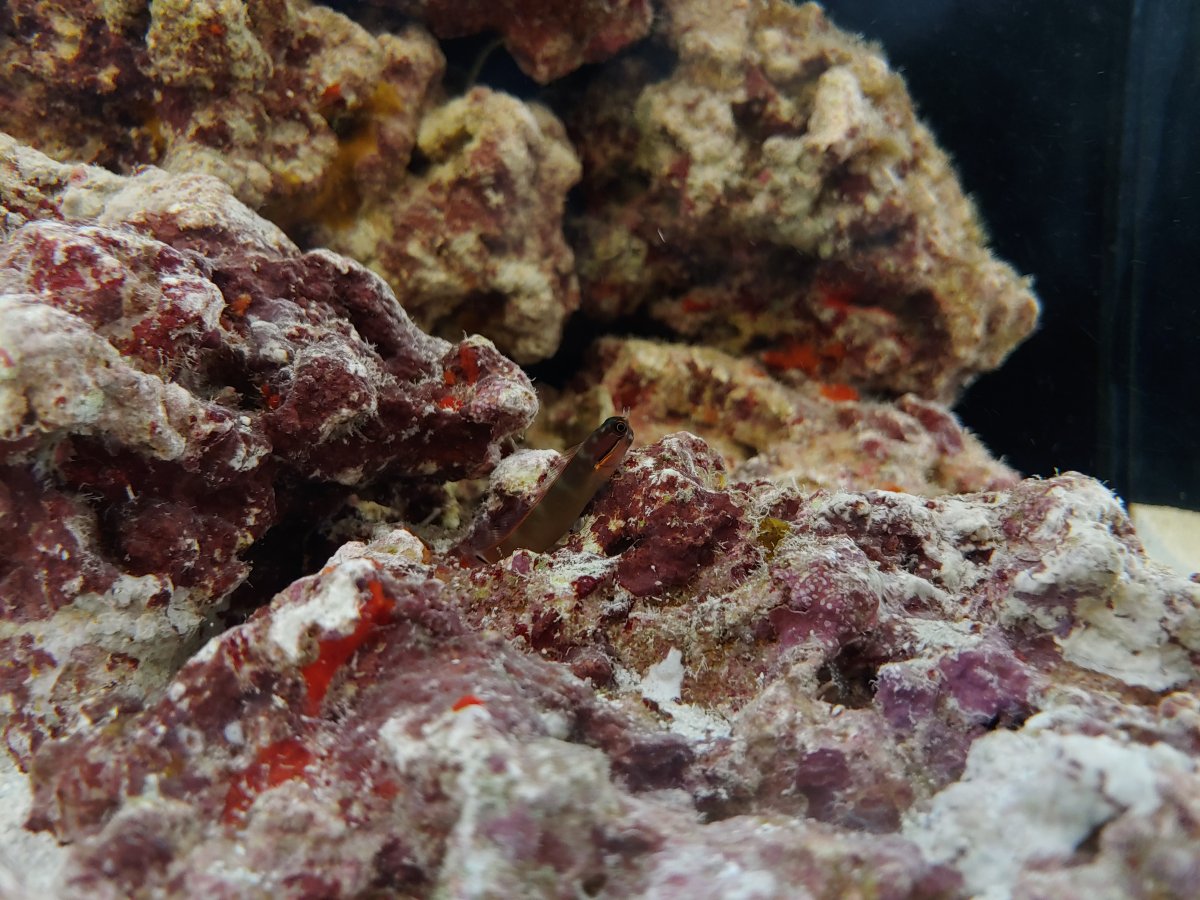 Ruby Red Dragonets are gorgeous and much less fussy about food than Mandarins. 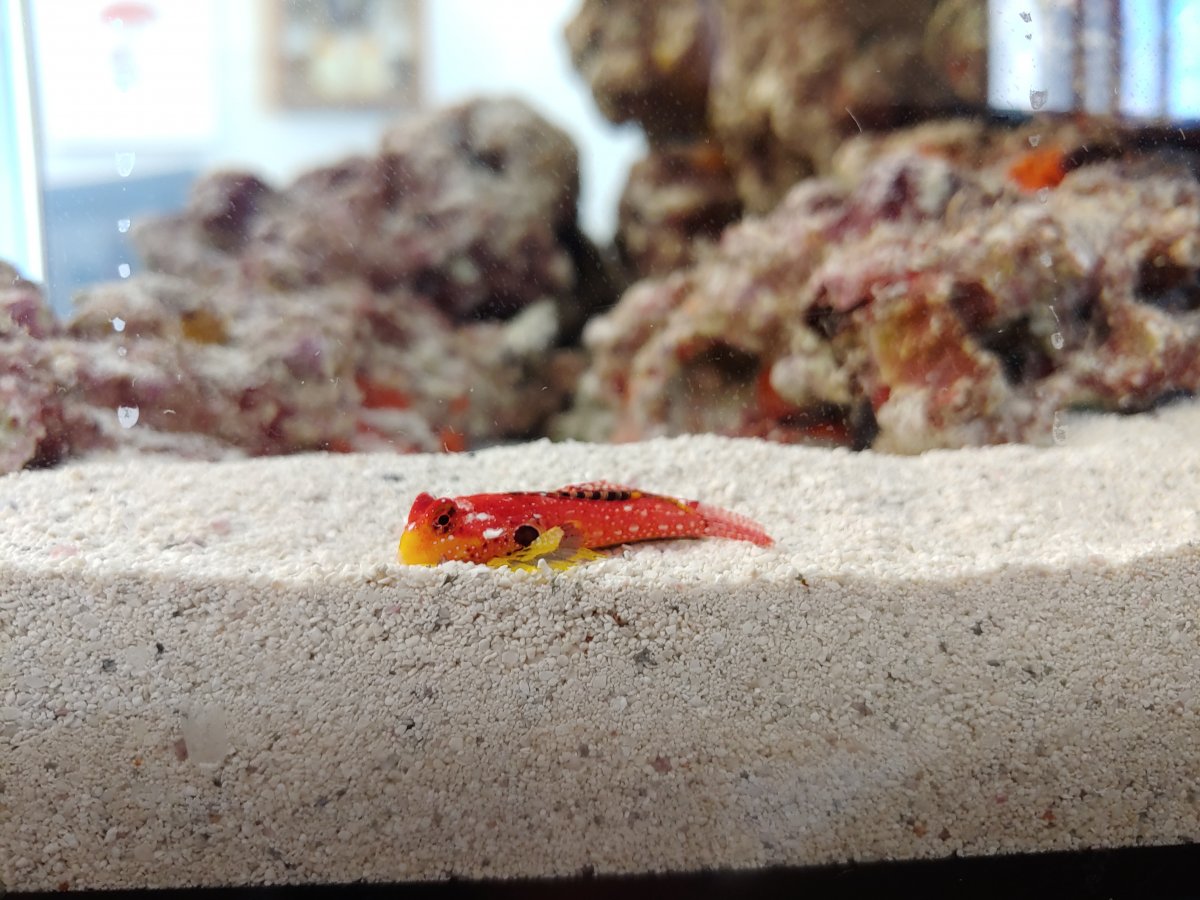 ****, well my Ruby Red Dragonet went MIA within 12 hours of putting him in. I don't have much hope of seeing him again but he disappeared with absolutely no trace. My fear is that a crab or shrimp hitchhiker got him but I don't know.

The tail spot is doing fine though.
OP

Well a lot has happened. First I got a few more fish, a clownfish, a yellow neon goby and a pair of yellow clown gobies. The Neon goby and clownfish are both ORA. I didn't realize it but one of the clown gobies wasn't looking great. Skinny, ragged fins, not eating. Found in the filter sock a few times. He's survived several days so far but we'll see.

Then I got some coral, two Cyphastrea, two baby rock flower anemones, some Favias, a Ricordia, and a Leptoseris. I dipped the stony corals in CoralRX and the Lepto was NOT happy. It turned 80% white and I though I killed it! But it seems to have recovered quickly. Leptos are delicate apparently.

Now the real story. I mix my food with tank water in a mason jar, as I was feeding today I knocked the rim of the tank with the bottom of the mason jar. Cracked the tank. Not a big crack but given it's location if it broke it would be a catastrophe. So I got a 27 gallon tote and moved everything out. Plastic mixing cups from now on. In my hurry I also managed to get some saltwater into my backup UPS. Heard some sizzling, perfect. Next step is to call Waterbox tomorrow and see what they say, if it comes down to it I'll buy another tank. It really sucks and maybe it would be fine but I'd rather spend $250 then risk my computer, flooding my apartment and the downstairs apartment, and losing all my fish and coral. 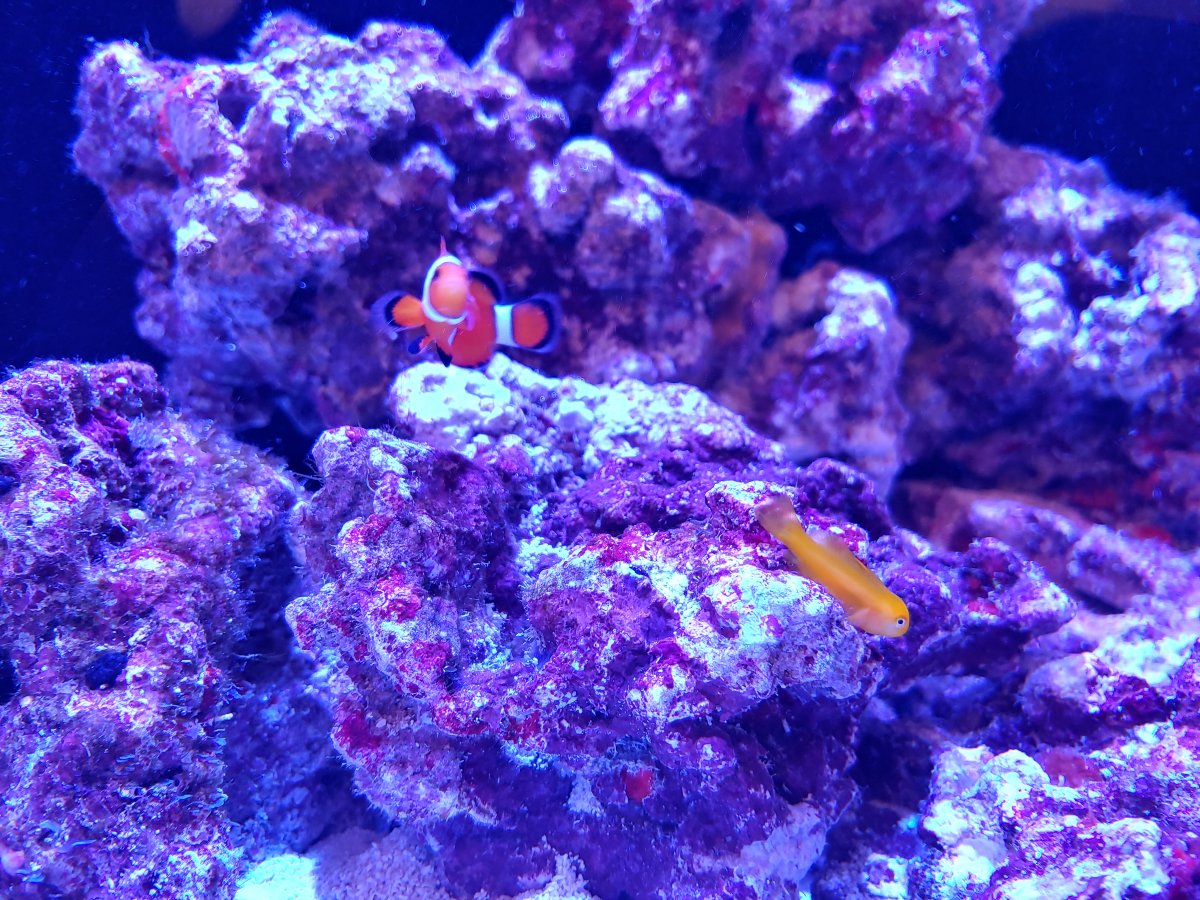 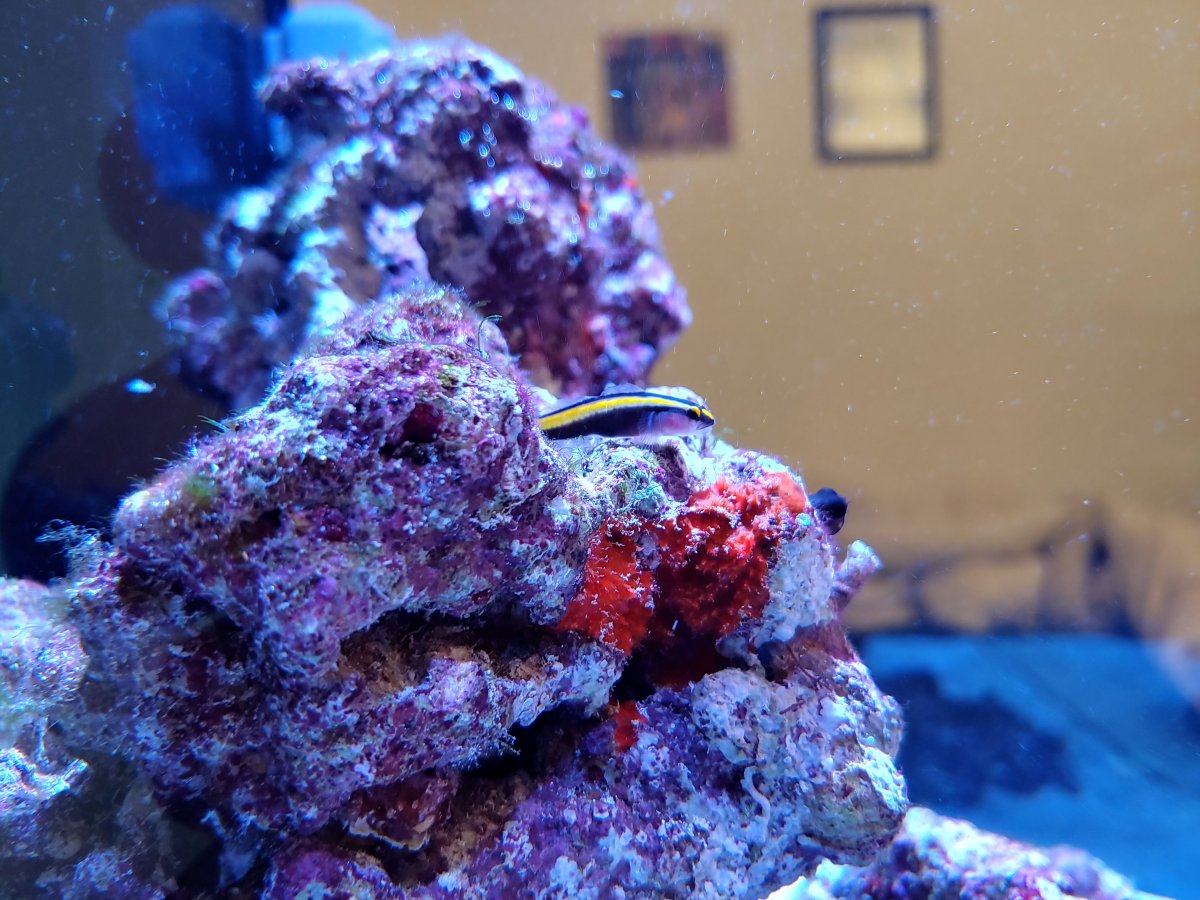 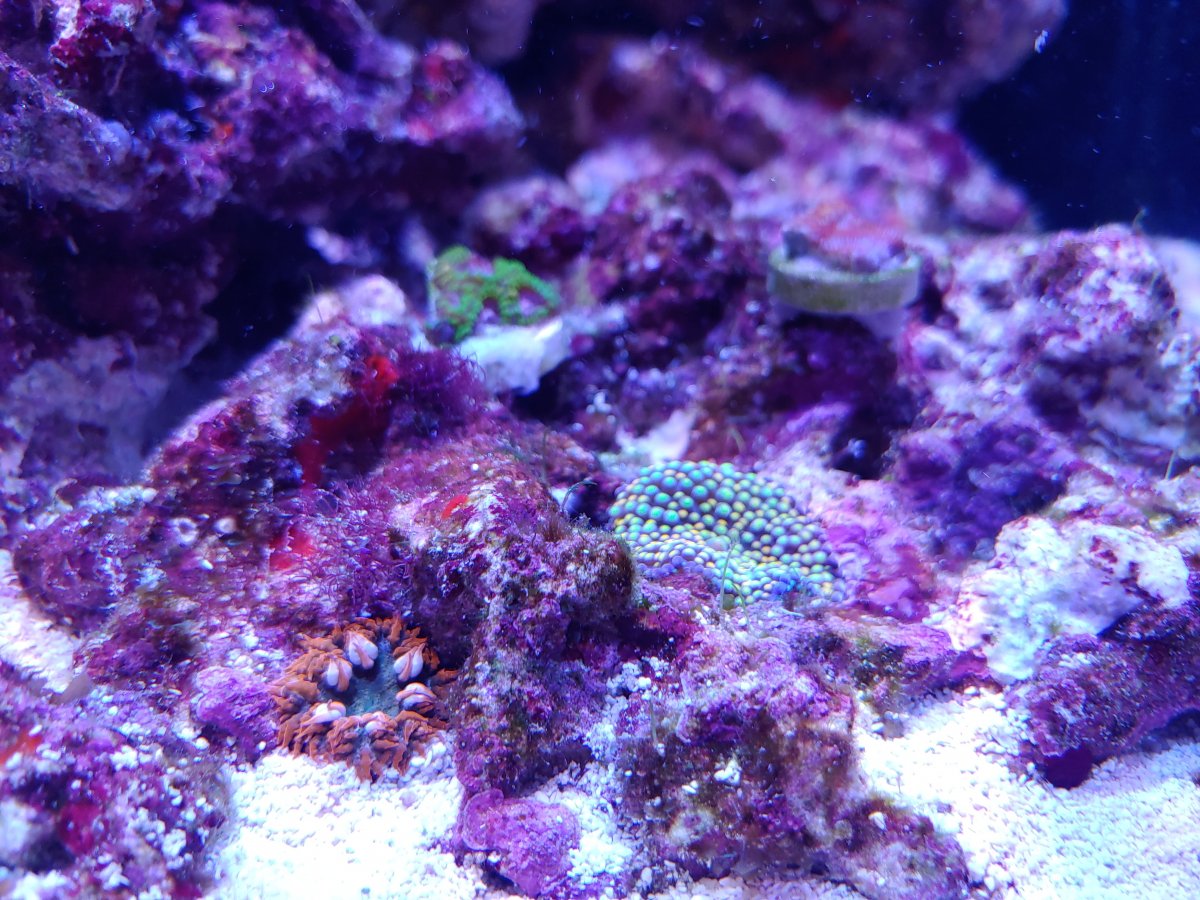 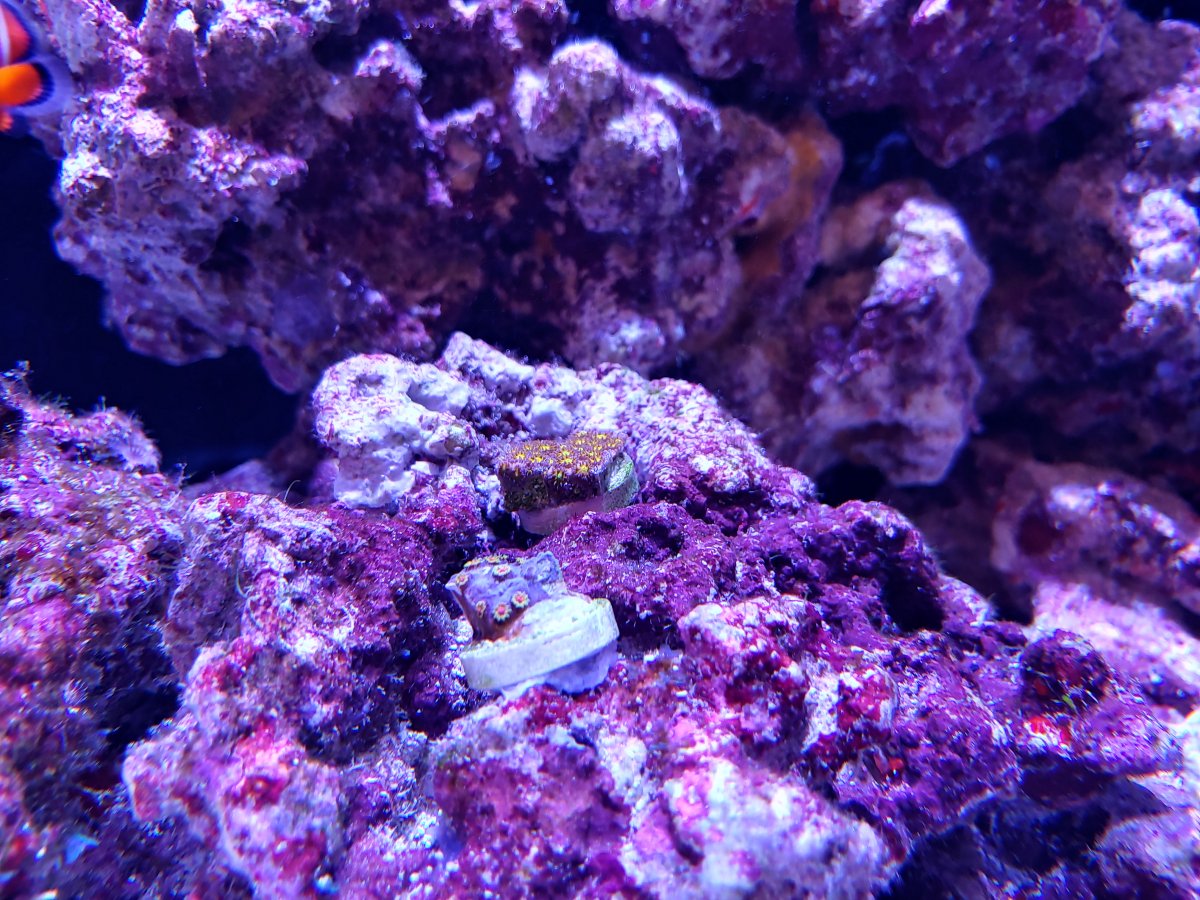 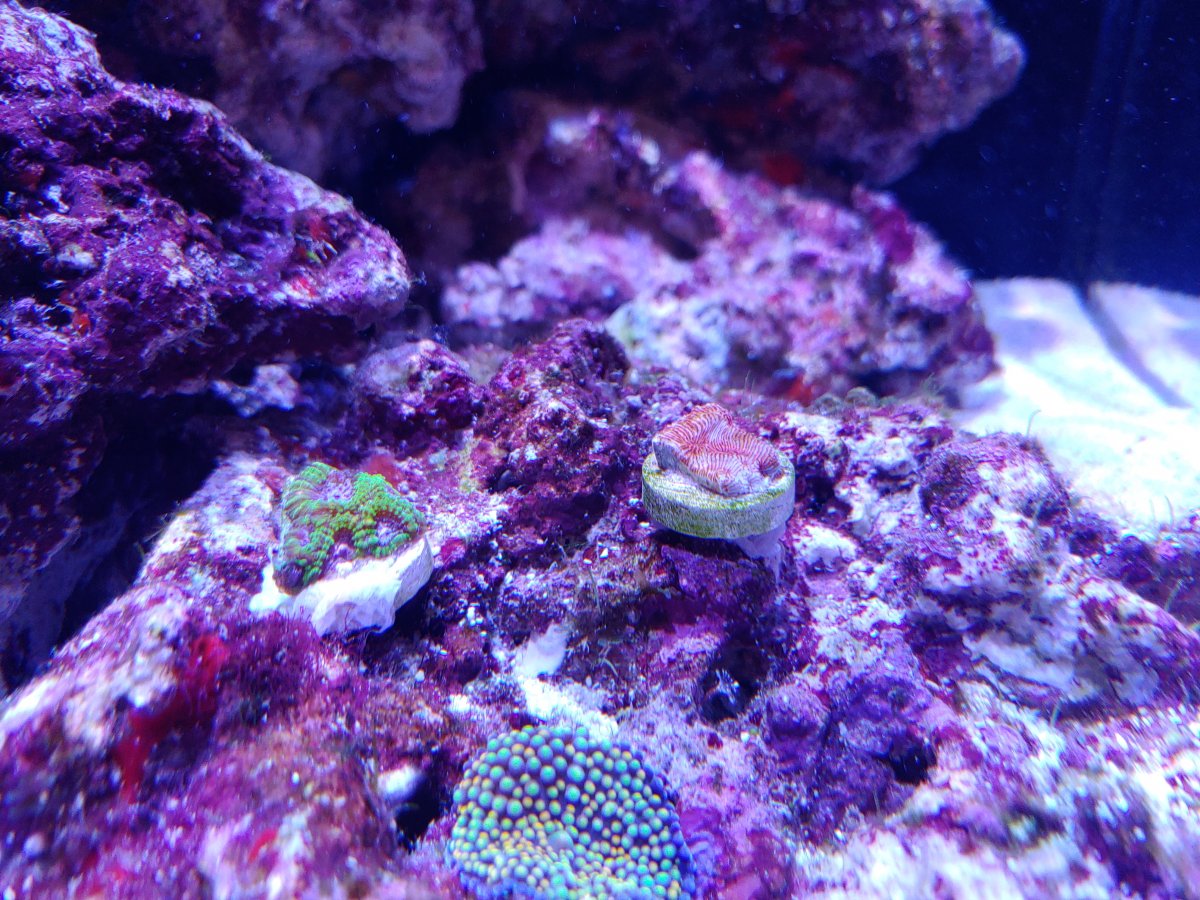 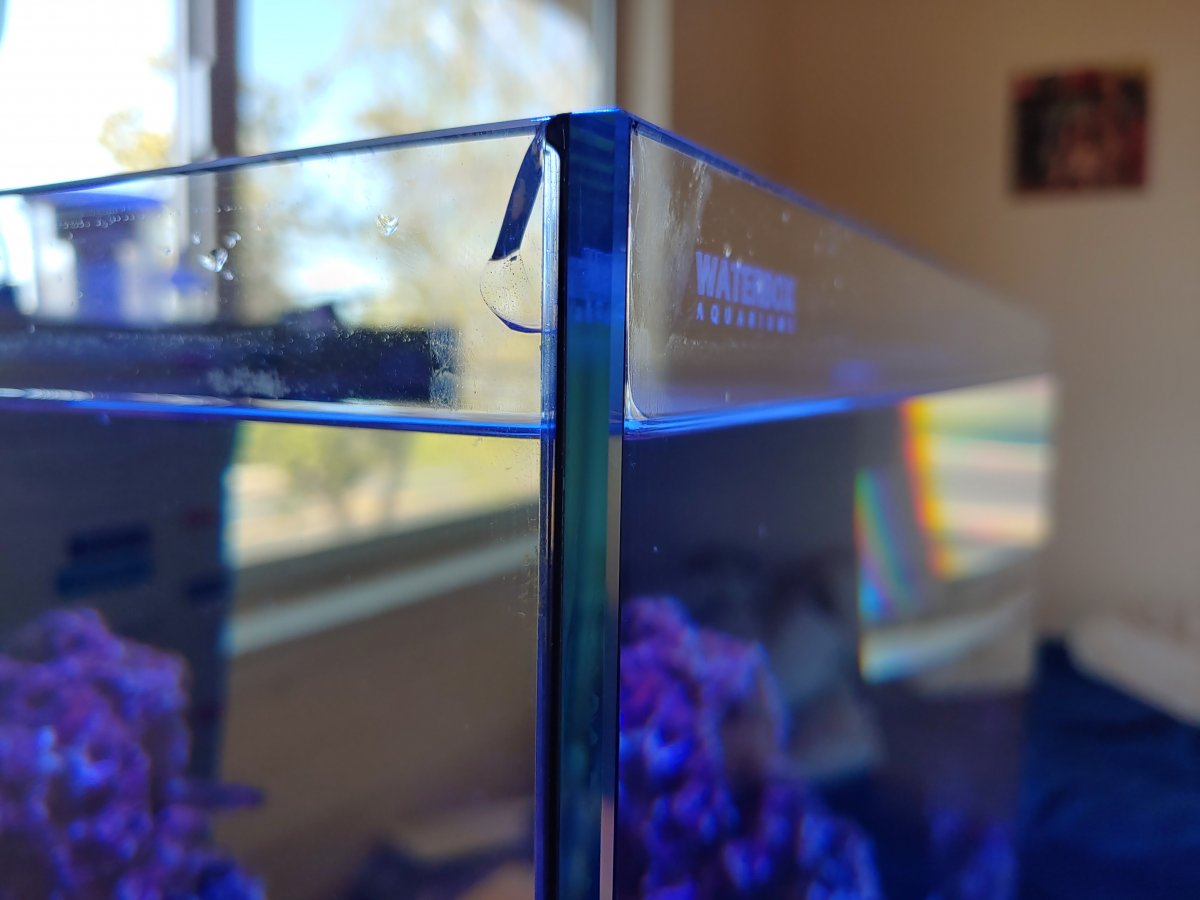 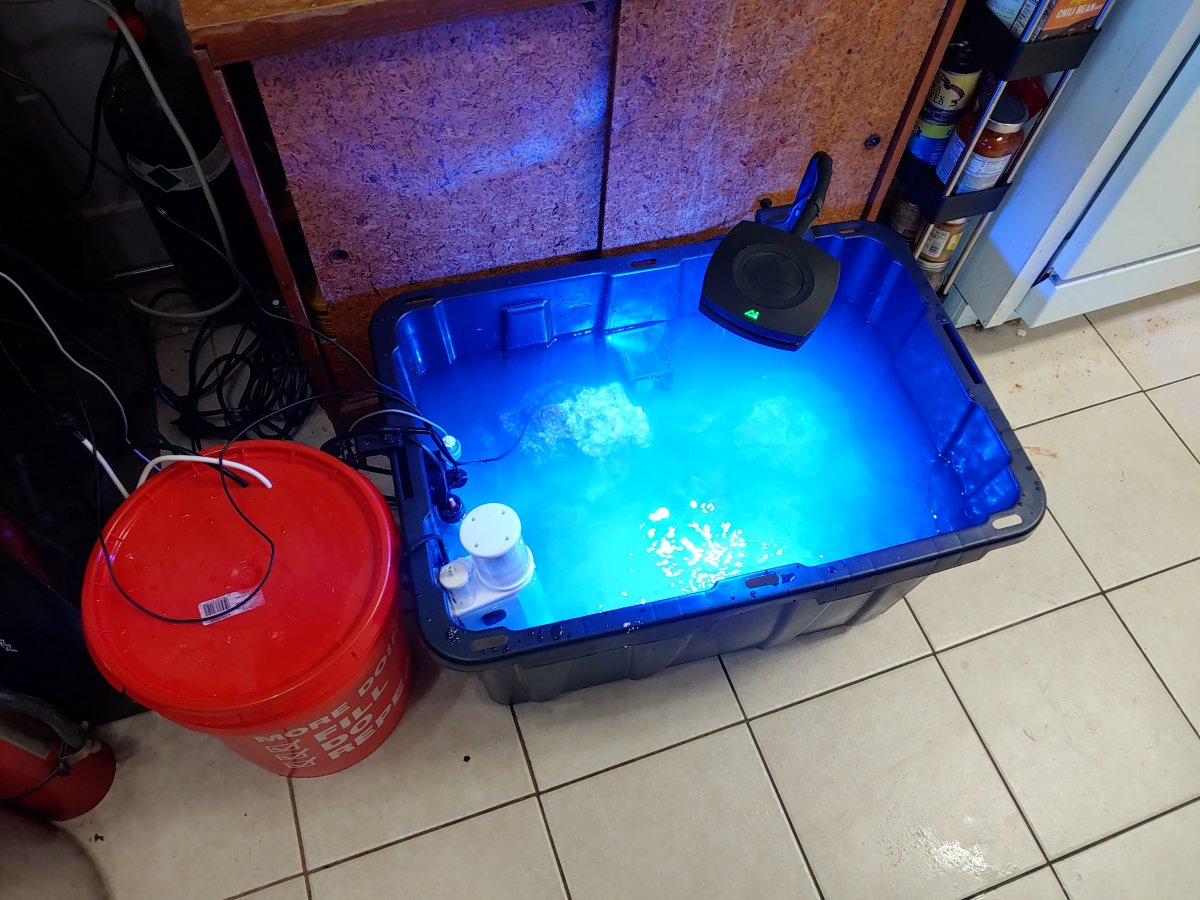 Got my replacement tank installed, got a bunch of new corals including a bunch for free from a friend. Managed to fit the Tunze 1073.020 in by removing both side covers, grinding down the intake port, and using some adapters. Flow seems lower than I would expect but it is getting pushed through narrow tubing and the intake is pretty close to the wall. 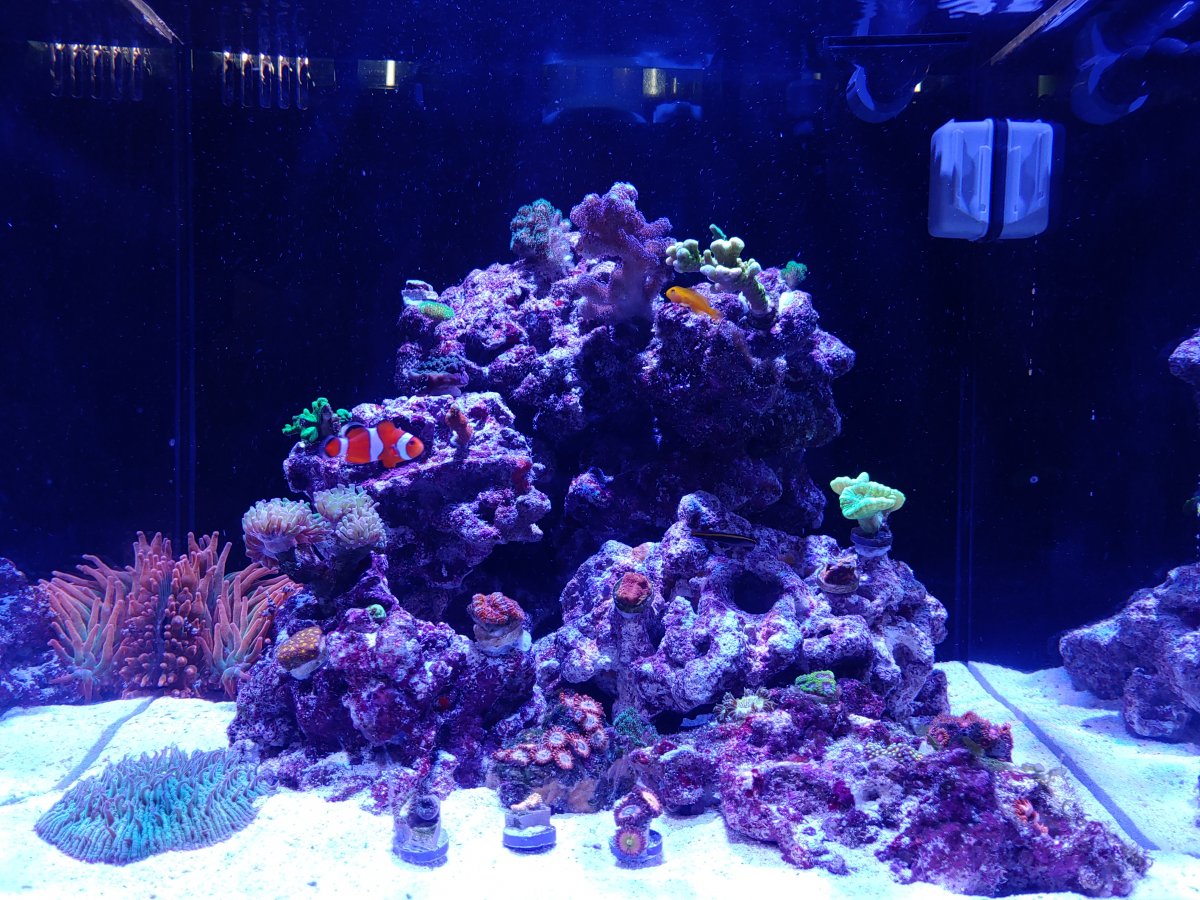 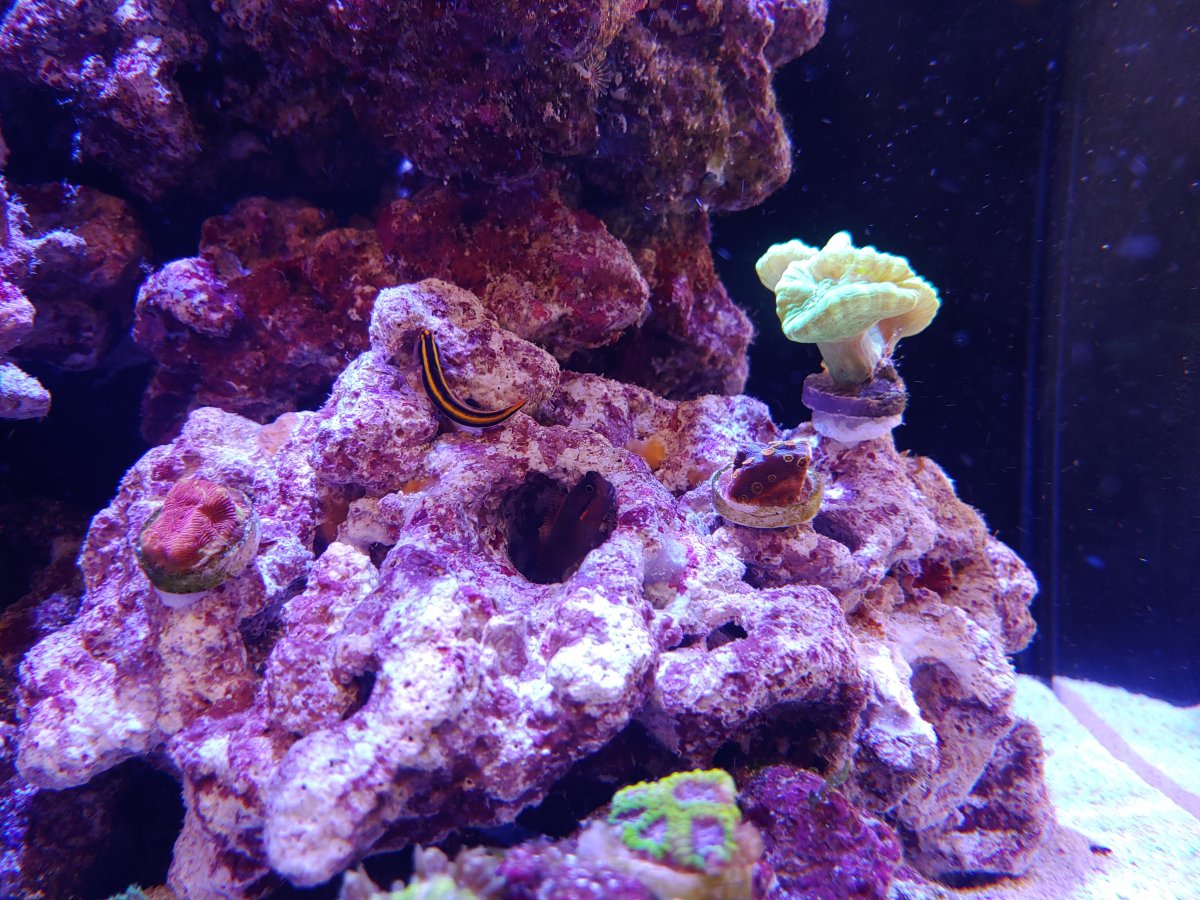 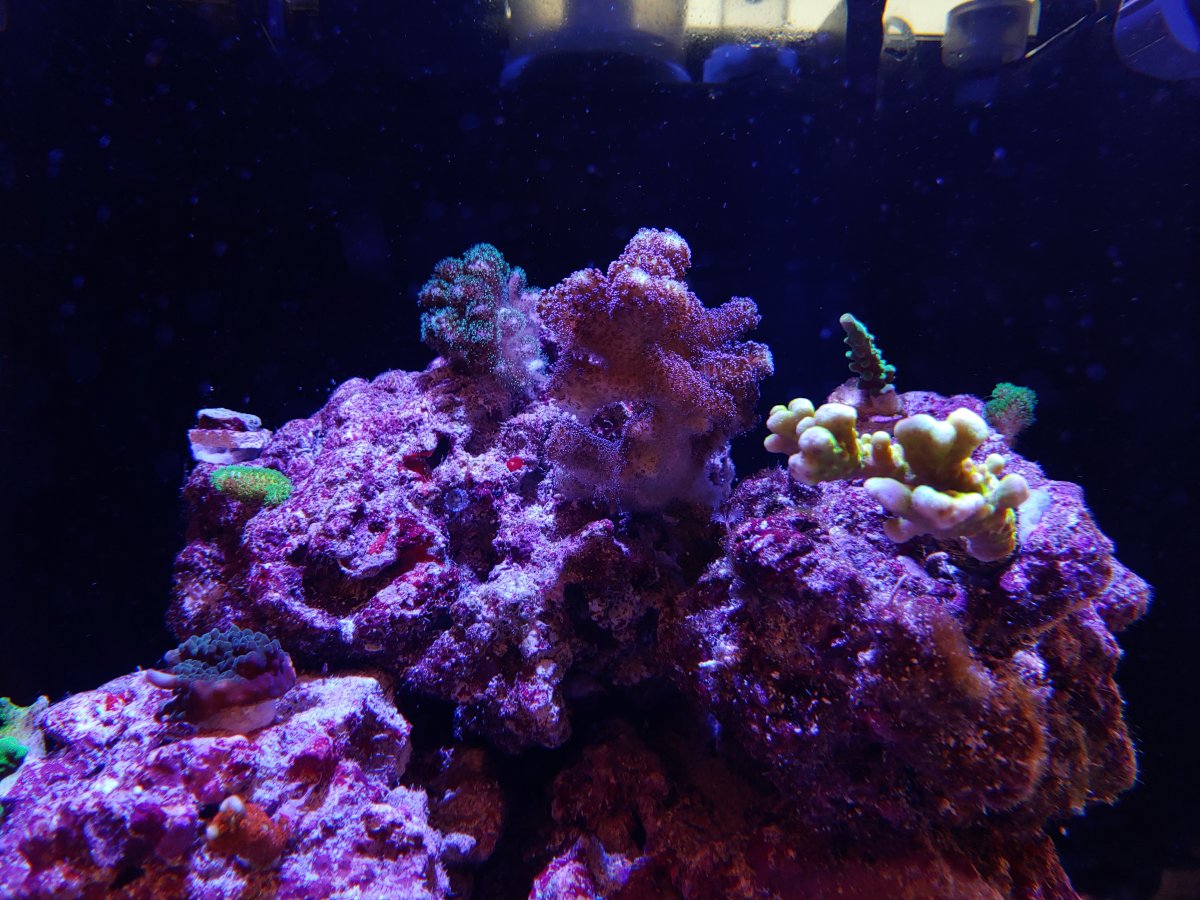 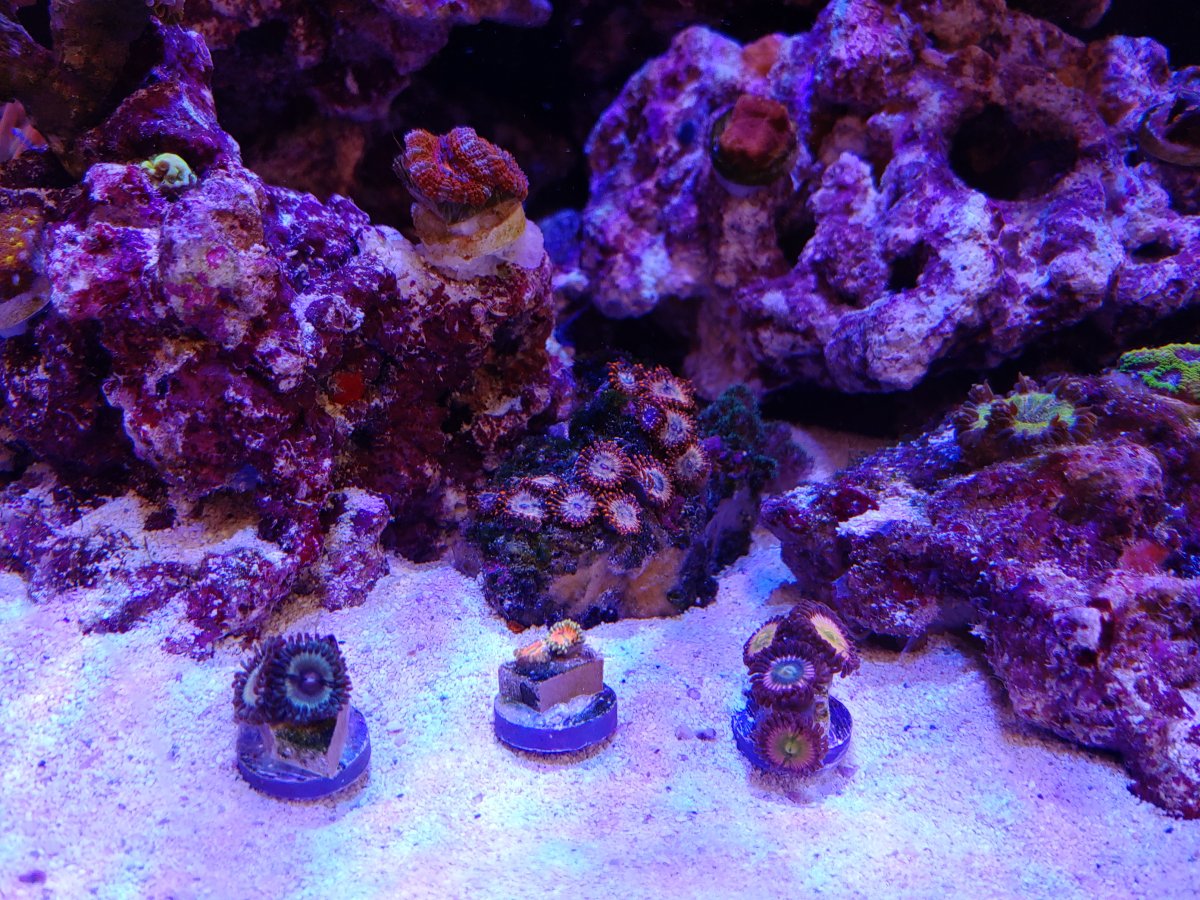 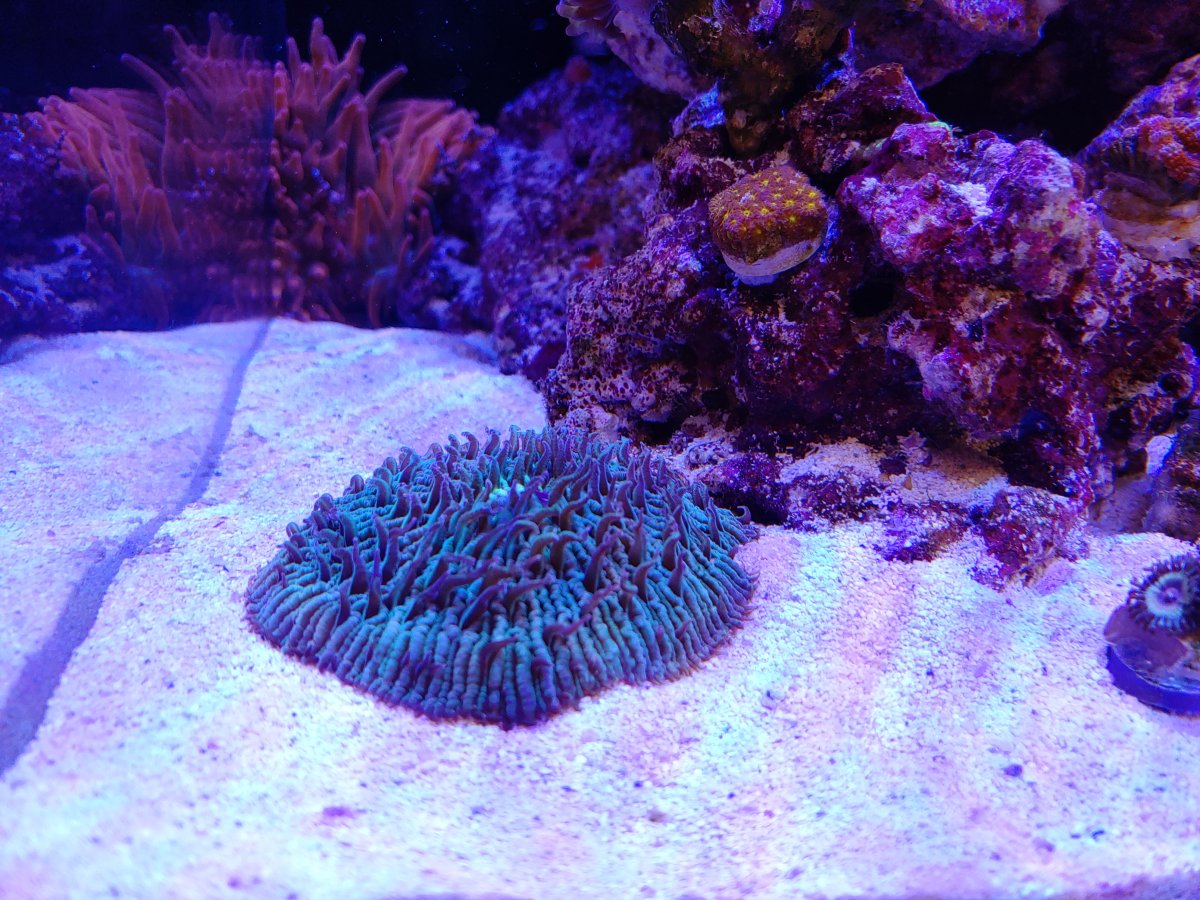