Hi,
I need expert help on connecting two tanks in my home office. My current tank sits next to my desk which is obviously an ideal position as my eyes drift from my monitors to my tank several times per minute. It's really incredible how connected I feel with my tank due to working from home and being next to the tank at almost all times.

Now, behind my back there's an empty space that has been a mess of reef tank related stuff for several years now - buckets, hoses, pumps, towels, a few boxes with spare parts, old equipment and a rack with supplies - foods, additives, glues, putty... Not only is the wife fed up with the open storage in the middle of the room, it's now also myself who's fed up with it in all honesty.

Obviously the idea of a nice long shelf to hold all the buckets and equipment is nice, but even nicer is the fact that I'd have a flat space for a frag tank! However... and now I come to the issue at hand - the tanks wouldn't sit next to each other and I don't know how to connect them without having pipes running over the floor. Naturally, I'd like to use the sump I already have. I won't have space for another sump within the new shelf and I'd also like to save costs on a separate skimmer, doser, heater etc. 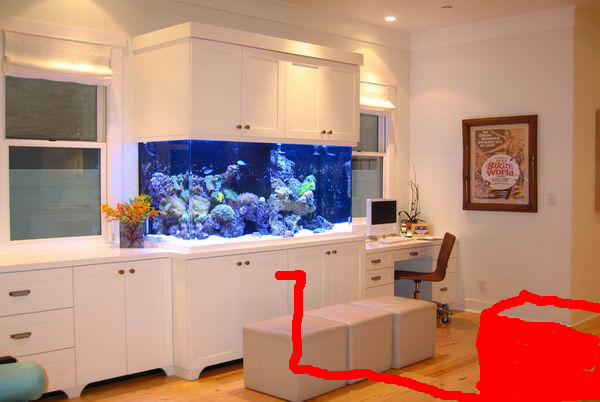 This is not my photo but you will get the idea as the setup is similar - my desk is next to the tank and the only place where I can put the new shelf with the frag tank is right behind me and in more or less the middle of the room (expertly drawn in red). People walk over that space all day, including kids running, crawling and generally being a hazard to any object within this area, particularly one filled with water and being placed on the floor.

Now I also live in Europe and the floor is reinforced concrete. Yes, I could lift the laminate flooring, drill the concrete and place the tubing there, then pour concrete over it and place new laminate on top but it's extremely expensive, I'm afraid of leaks and I'd long be dead in a domestic violence case perpetrated by my lovely wife before the project is ever complete.

Now I'm turning to the r2r DIY community for ideas. My first idea was to use a permanent peristaltic pump to pump water from a common sump with a thin flexible tube and have the same silicon or thin plastic return tube with enough leeway running back to the sump. The flow would be lacking but it'd be something at least. Tubing could be longer and flexible enough so that even if someone stumbles on it this won't be too bad. Nothing would break. Honestly, I don't know if this make any sense in terms of flow to/from sump and in terms of safety.

The other idea is to have a sort of a "Tower Bridge" system, whereas early in the morning I would "lift" or disconnect the pipes from the sump creating and empty space between the two tanks and effectively disconnecting the frag tank from the main system. Then late at night I would lower the pipes and connect the flow again. I have no idea how this could be accomplished and if possible at all. It would also need to be pretty simple to do so I'm not lazy to do it every morning and evening, but also pretty foul-proof in terms of flooding. I know that parameters would fluctuate quite substantially, including pH and that I'd need a separate heater in the frag tank when it's not connected but I'd take that over drilling reinforced concrete.

The only thing I know would work without drilling are those hose protector ramps placed on the floor with tubing running through them but they're just ugly and are not a kind of decorative pieces you'd like to have in a middle of your home.

Personally I would say get an AOI aquarium as your frag tank. Yes the additional cost of a couple pieces of equipment, but with countless hassles saved.

I would strongly advise against using "small flexibly tubing" and pumping water between system half the day. It sounds like a lot of water damage waiting to happen when the return runs to slow (or clogs because it is very small and at similar height. You would really have to pump both directions and just hope they stay in sync and one does not get something stuck in it.

Don’t see a magic bullet here. Move the tanks closer together, or set up a sump for each is what I’d do

It going to be very hard to balance both tank's water levels like this, Pumping to and from each tank. and each pump is different, even by a little it could mess up you water levels further down the road. Just seems like such a hassle
OP

Alexreefer said:
It going to be very hard to balance both tank's water levels like this, Pumping to and from each tank. and each pump is different, even by a little it could mess up you water levels further down the road. Just seems like such a hassle
Click to expand...

Well, another idea was to just use flexible silicone tubing with a much lower rate of flow, with a small pump from the sump to the frag tank and just drain from the frag tank back to the sump.
Let the silicone tubing fall and "flow" over the floor with enough leeway so that even if someone trips or steps on it there would be no consequences.

Secure the drain in the sump using standard dosing tubing holder, while the return on the tank side might be something like a Xaqua with its integrated overflow.

One issue that pops up now that I'm thinking about it is the siphon on the return. The tubing would go from the tank down to the floor then up to the sump which is on the floor but is obviously almost 15" tall so the tubing would have to go over that and I'm sorry to be stupid but I have no idea if water would flow "by itself" through this tubing without initiating a siphon?

I'm aware that the amount of flow would not be major but still, would it be enough to bring enough elements/nutrients and remove enough organics back to the sump in order for the frag tank to function?

This is very difficult, I have an idea of what you're talking about but just don't know how to carry it out. The siphon is a problem. could you somehow use a sort of auto top off system which senses that the water in the main tank sump is low and makes a small pump in the other aquarium run?

in order not to overwork the ato you would need your feed pump to be extremely weak, no more than 100 gph so the ato isn't running 24/7 and still not keeping up

Not sure what you guys are talking about. One return pump for each tank, one drain for each tank. Once running it levels off in sump and ato takes over from there. This is not a problem.
The problem is how to get water from sump on one side of room to tank on the other side
OP

theMeat said:
Not sure what you guys are talking about. One return pump for each tank, one drain for each tank. Once running it levels off in sump and ato takes over from there. This is not a problem.
The problem is how to get water from sump on one side of room to tank on the other side
Click to expand...

Exactly. So one possible idea I've had was instead of using standard PVC plumbing between the sump and the frag tank was - use flexible silicone hoses, such as used for dosers or ATO. Run it on the floor but with enough leeway so that even if someone steps or trips on it it doesn't cause a disconnect or a failure.

Yes, the tubing would just sit there on the floor but hey - we do much worse things in order to keep our tanks!

they have electrical plug runners (for office buildings) that u could cover up tubing with (keep peeps from tripping/pulling it out or standing on line) not 100% sure if that would work or not but maybe check it out?

Could always just build a "false stepped up" floor (or section) to cover tubing running from one to other.
I'll bet it is cheaper & ezr in the long run to just run a AIO tank or small sump.

Rotational moulded ATO and AWC water tank - under sump set up - to be made - give me your ideas?