Quick details about the tank:

I started cycling the tank in mid-June. Used Microbacter7, live sand, and a store-bought shrimp to kick the cycle off. Test showed cycle was complete around 4th of July. Made the mistake of adding fish a bit too early before the good bacteria had enough time to build up a big enough colony. Dosed Prime to handle the spike of ammonia and nitrite and did regular water changes. Continued to dose Microbacter7.

Took about a week for the params to settle out. After testing the water to make sure the nitrate cycle was going well, without any spikes, I added a leather toadstool coral and a single frag of assorted zoanthid polyps. They responded well and all opened completely up within 24 hours of being added to the tank.

Being an idiot, I fed the corals ReefRoids without considering what that would do to the bioload. What followed was a terrible algae outbreak. Every inch of rock, sand, and glass was covered in green algae. It looked brown under the blue lights, but was clearly green when wiped off the glass using a paper towel.

I immediately turned off the light for a day and a half. Sucked and scraped what algae I could off of glass and rocks. Did smaller water changes every other day and finished with one big 50 percent water change.

There is still some algae in the tank, but it isn't growing nearly as much. I have a protein skimmer on the way that will hopefully keep the waste a bit more in check. After the algae outbreak is also when I added the Chemipure Elite (replacing the stock Aquaclear carbon) and the Microbacter7-seeded Xport NO3 cubes.

My zoanthids were all happy with the lighting and flow before the algae outbreak. They all, understandably, closed up when the tank went through the bloom. My toadstool coral shed its skin once the water cleared up to get rid of algae buildup, and had a full day of its polyps fully out. I pulled out as much of the shed skin as I could using a net and changed the filterfloss it looked like the rest had been sucked up by the filter. The leather coral has closed up again to shed since small amounts of algae re-accumulated on its skin.

I am looking for advice, though, with the zoas. I understand how I got to this point, and the mistakes I made along the way. I am a bit perplexed, though because some zoas are fully open, and some are only opening partially.

My "generic" zoas, basic light green polyps, reopened day one after the big water change. I have about 7 polyps of Eagle Eyes zoas that are acting really finnicky and opening up halfway in early mornings, and then closing by mid day (once my lights ramp up). I have adjusted the light to about 50% of the power from before the algae bloom, thinking that the zoas might need to just readjust. I am just confused about why the more "dull" colored zoas are perfectly happy, but the brightly colored zoas are still refusing to fully re-open.

I have an API Reef Test Kit being delivered tomorrow so I can test the phosphates, calcium, and carbonate hardness levels. But since the zoas seem to re-open early in the morning when the sun is up but the tank's lights haven't come on yet, it feels like this might is a light sensitivity issue. If it is, do I just wait it out for the zoas to become comfortable again?

I know the leading advice tends to be "give them time," which I am more than willing to do. The fact that the zoas start reopening and then stop 25-50% of the way and close up again, though, has me a bit concerned. And since it is only the brightly colored zoas that are acting up, I wonder whether there is a simple solution that I just don't know about yet. So any advice you have to give would be greatly appreciated.

Lastly, since there is some algae starting to cover the toadstool leather again, is there anything I can do to rid the tank of algae without killing the good bacteria or going lights-out again? 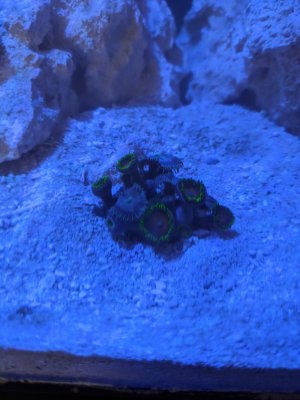 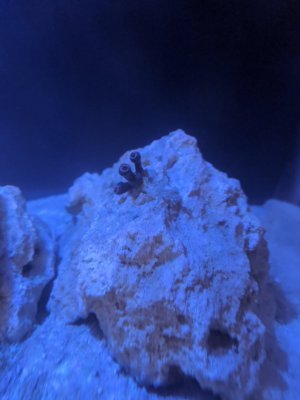 To start: Do you run carbon? What are your phosphate levels?

I’m going to go with give them some time. I’ve had some stargazer zoas for a 3 months or so and they stayed open for first 6 weeks and growing they got algae growing on them so I worked on getting the algae off and they stayed closed till this week so another 5 weeks or so. They slowly started peeking through and about 5 out of the 8 polyps are now open.

Obviously you'll need to see where you stand once your test kits come in. Zoas benefit from dissolved organics in the water, some nitrates and phosphates... ergo you'll hear 'zoas like dirty water.' What they actually like is mature aquariums where they're able to pull food out of the water. I'd suggest your zoas would benefit from just a tiny bit of spot feeding with a product like 'reef roids.' I'm talking about 5mils or less just to 'help them along' while your aquarium matures. Naturally you're in a delicate position due to the newness of the aquarium, you don't want to add too food and further encourage algae growth or mess with you cycling.

As for the algae question... I'd just leave it alone. Time and patience are your friend here. Adding something like Chemiclean is only going to cause more problems at the moment.

Help - one zoa frag not opening

Zoa not opening up

Help! I think I have zoa pox

J
Zoas extended and not opening