How can I fix this?

I have a small acro colony, it seems to be doing well. The polyps are all out but… where the light doesn’t hit the underside it’s going white.

if you see the picture, underneath is going white.

how can I fix this? Should I attach some reflectors to the tank so it can hit the shaded spot? 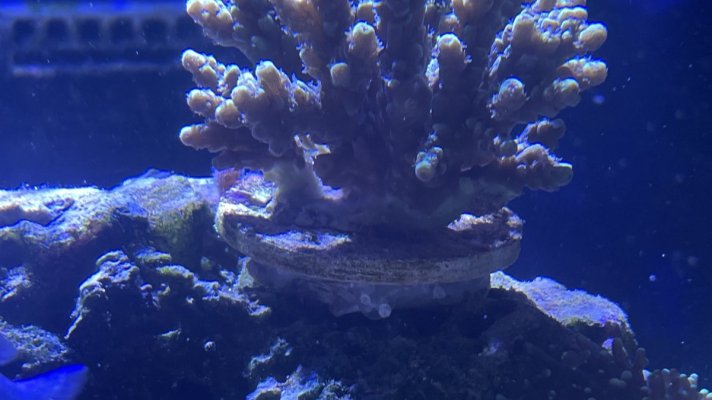 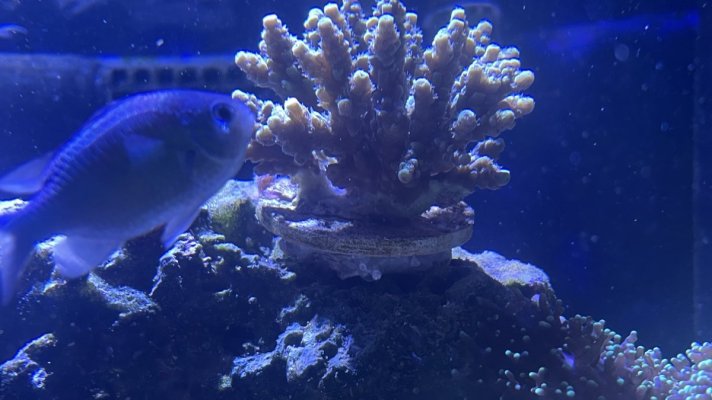 +1 to tissue recession. What is your N03 and P04? Hopefully not zero. How long has the piece been in the tank?

"...in perfect isolation, here behind my wall."

I agree.....looks like the tissue is dieing off. To answer your question though, there really is no way to provide lights to the underside of colonies without adding additional LEDs, implementing T5s, etc.
OP

it’s been in the tank around 3 weeks to a month maybe. All the polyps are out and it’s still very bright.

Some corals can tolerate phosphate of 0.04 in an aquarium but some can't and their tissue recession looks like what you show in your pic. Might want to bump that up a bit.

I have a couple frags doing the same. Will raising the po4 slow or stop the tissue recession?

I have a 4' x 8' trough set up as a coral grow out tank. I tried running it at a phosphate of 0.05 with little growth, tip burn (despite alk of 7.3-7.5), and tissue recession at growth margins. Increased my phosphate dosing a little too aggressively and bumped phosphate temporarily to 0.8 (in less than a week). SPS corals demonstrated improved colors, tips started regrowing immediately, and no change in algae at all. I'm bringing the phosphate level down and will try to keep it in the 0.1 to 0.3 range but it was abundantly clear that maintaining that low of a phosphate level was not a successful strategy for that tank.

I realize that there are many tanks running low nutrient levels. However this is a bit misleading, as many of these tanks have balanced high phosphate in/high phosphate out (via utilization by growing organisms, turf scrubbers, etc) resulting in low measurable phosphate. Phosphate is always available and is rapidly used, resulting in a low measurable water concentration. Generally this is through high fish bioloads, heavy feeding, and large volumes of rapidly growing corals.

By comparison, I believe that maintaining new tanks with minimal growing biomass at very low phosphate concentrations (as with my trough above) literally starves the animals of necessary nutrients. There is no large phosphate input with rapid utilization/export, it's just near absent/in very low concentration. In corals that are either growing quickly or require greater phosphate availability, growth either slows or recedes due to lack of necessary intracellular phosphate. This is typically seen at stony coral bases and growth tips.

Having set up two tanks in the past two years and seen similar results from trying to maintain a phosphate concentration of 0.05 in a new tank, it's my druthers to keep a higher phosphate level (0.1-0.3) until the tank matures for a year or two and then consider lowering it to 0.1-0.15.

By the picture we see there is no light hitting that part of the coral. The light seems poor and without anything to offer. The balance of light, water motion and nutrients is the tripod of reefing. People have been talking about nutrients but forgetting about the true qualities of the light they have.

RR Night Show? ANyone heard of such an acro?