I totally dig this guy. Wish I had one in my past tanks. 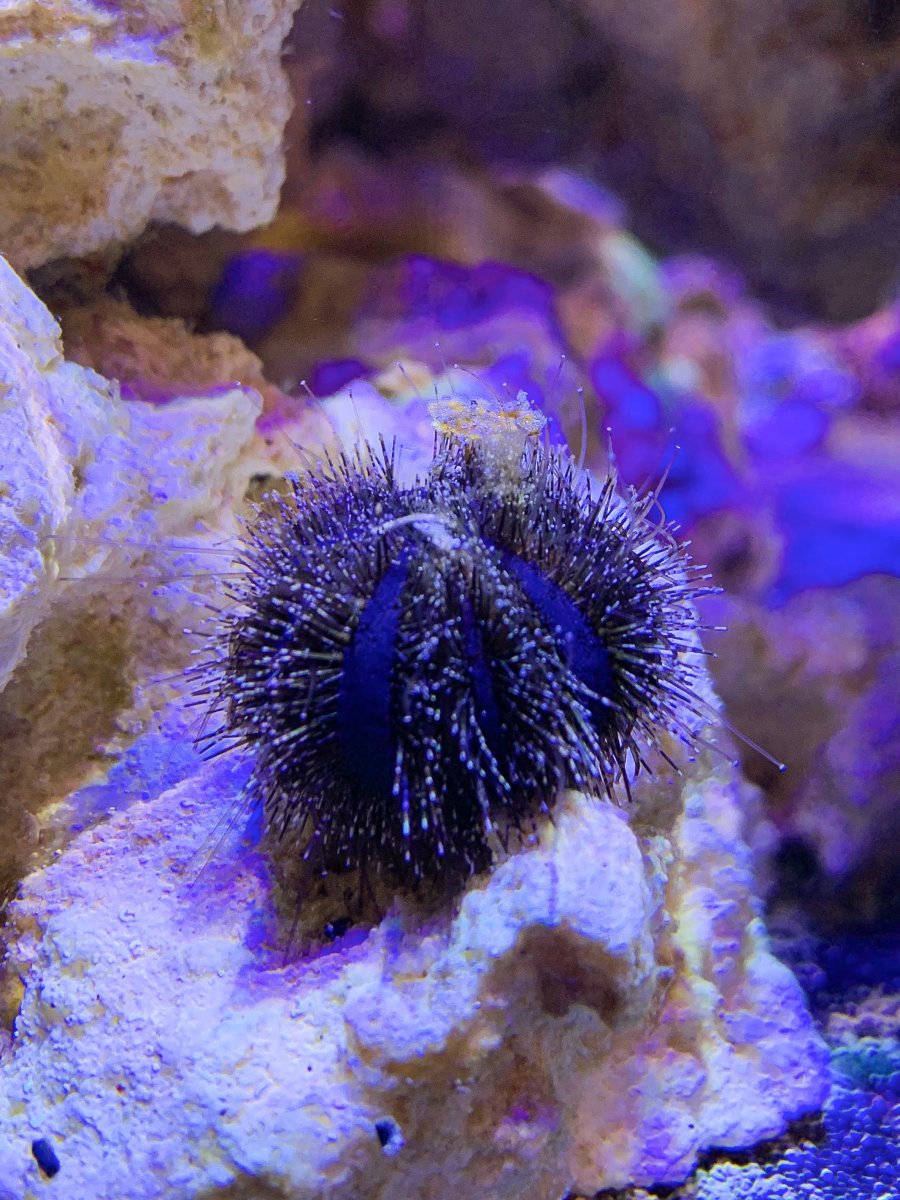 BeardedMcG said:
I totally dig this guy. Wish I had one in my past tanks.

They really do an amazing job I don't think anything else can do.
OP

Clowns in QT swimming without a care in the world.

Loving the additional pics, particularly the side FTS. Looks great!

I was feeding the clowns this morning and thought one looked a little pale. I noticed the air hose in the QT tank had come out of the water overnight. Not sure how my clamp had come undone but it’s a good reminder to double check things.
OP

Last tank transfer is done! Clowns are happy. I’ll move them to the DT this weekend if everything looks good. 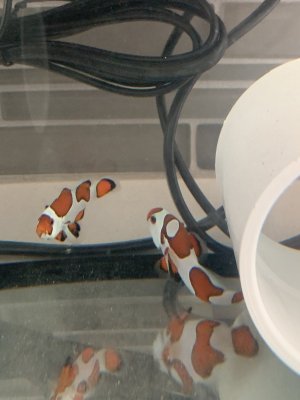 Those are such pretty clowns. That went quickly!
OP

I’ll be gone for the next 3 days being a consular at my sons summer church camp. Setting my wife up to cover top off and feeding as easily as I can while I’m gone with individual bags of food and jugs for each day. 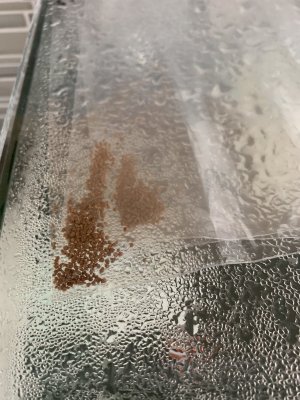 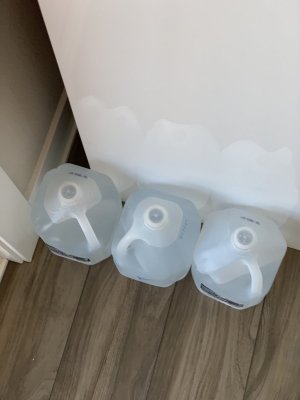 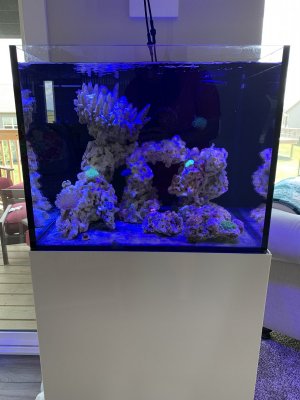 I had a great time last week at my sons summer camp but we had a small scare Thursday night with the clowns. I did the final tank transfer Monday morning and left them in QT because I wanted to move them to the DT when I got back Friday so I could watch them.

Thursday night my wife called saying that the female clown was laying on her side. She did an ammonia test and it looked like it was at 0.5-1 ppm. I talked her through a 1/3 water change in the QT and had her turn the air pump up because I think the hose might have come out of the water during the day. She text an hour later the female was doing better. I returned home the next morning and she looked better but still not great. I moved both clowns to the DT and she recovered quickly. 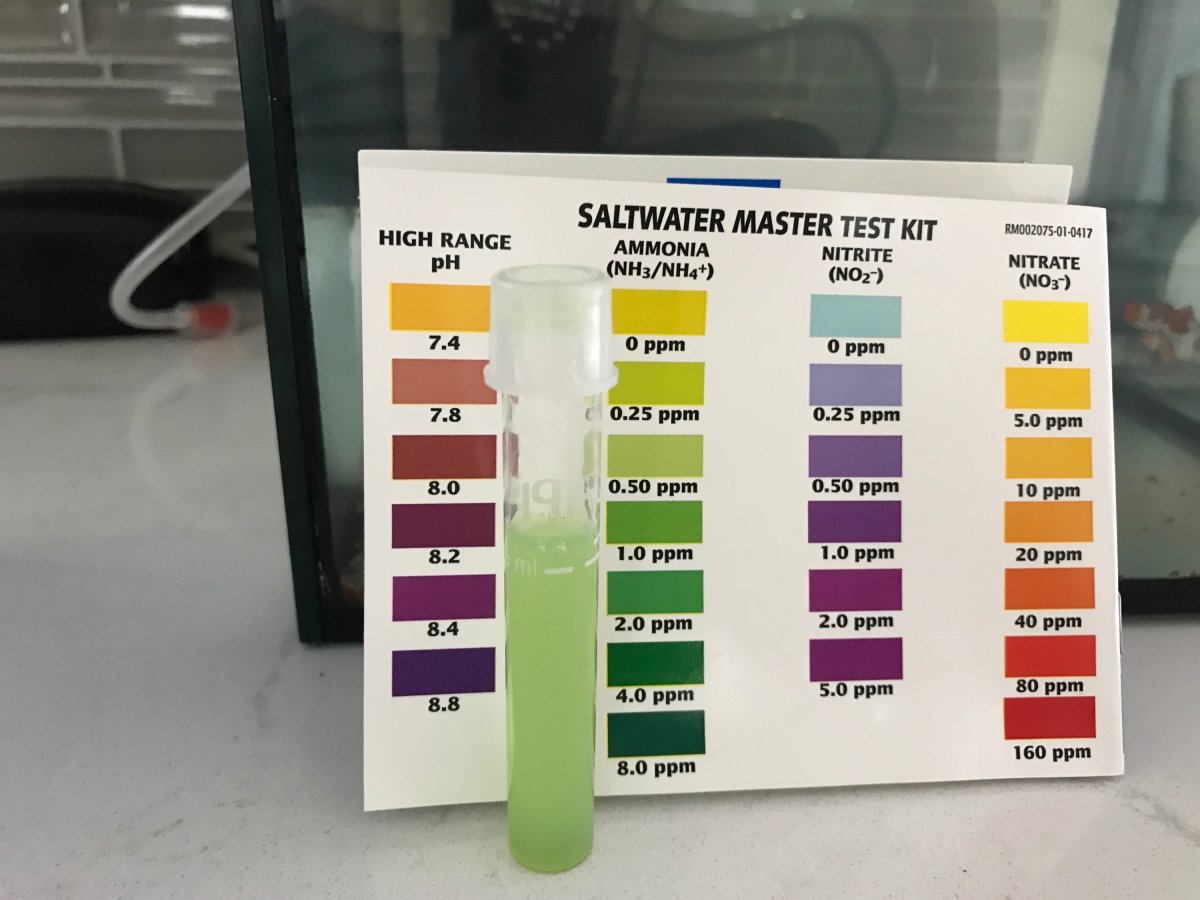 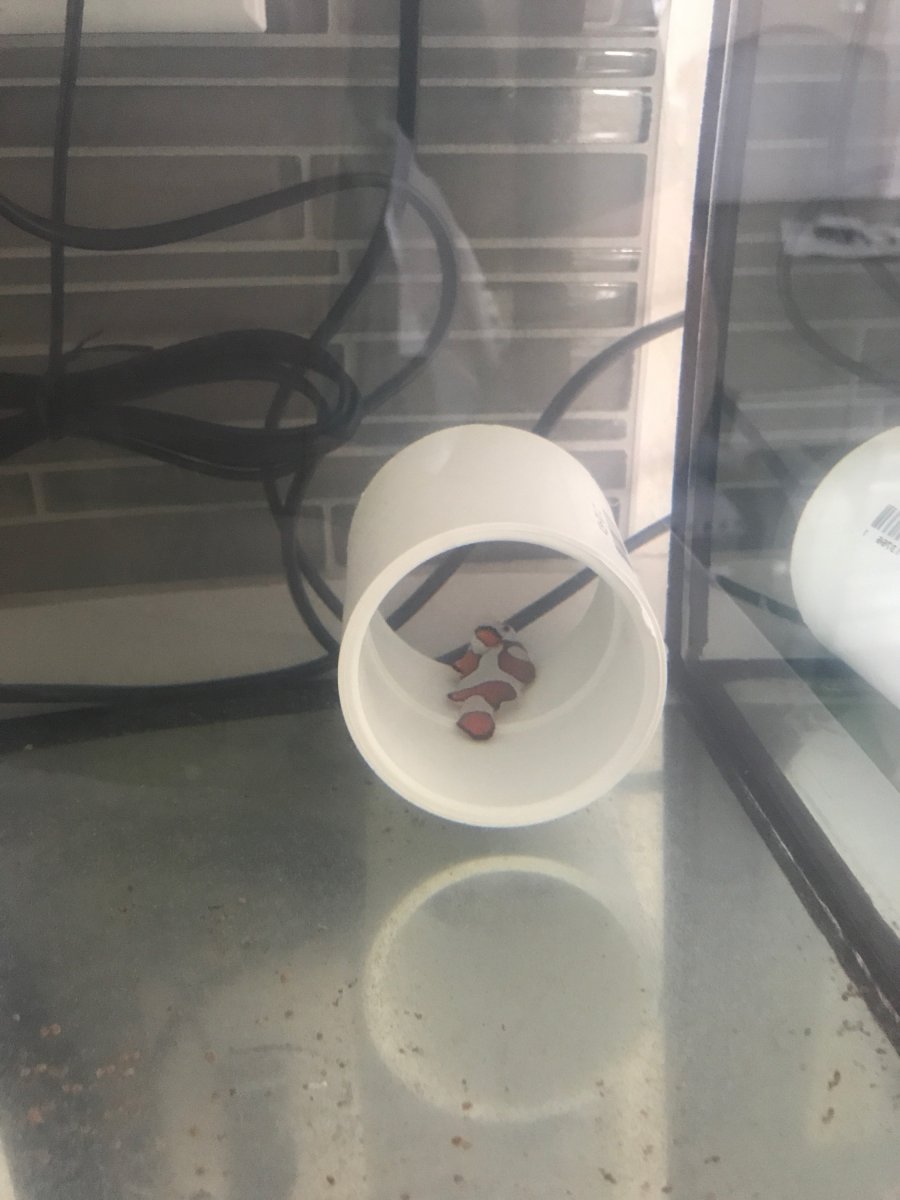 Glad that all worked out ok, doesn’t take long to lose a fish to ammonia. Good thing she noticed so quickly.
OP

I’m not sure what’s going on with my alvapora. Something might be eating it but a polyp or two goes missing everyday for the past few days. 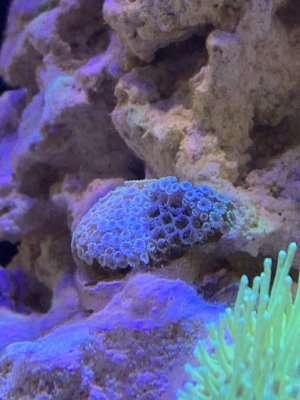 are the clowns in there with it? They might be trying to host in it.

Glad you managed to save the clown. Close call for sure.
OP

No updates since I’ve been spending all my spare time trying to finish putting in my fence. I’m 97% done with the fence and had a few minutes to look over the tank. I haven’t seen any major growth recently but my Cyphastrea is doing well with a lot of new baby polyps.

Thursday the plumber comes to install a line for in ground yard irrigation. I’m also having him run a line for my RODI unit since I currently don’t have a hookup in the basement. 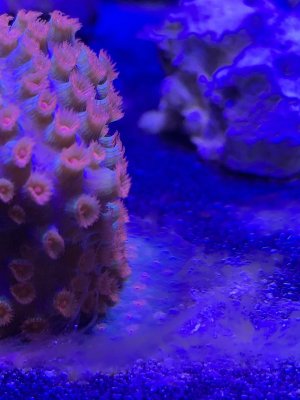 Almost another month of growth on the birdsnest. 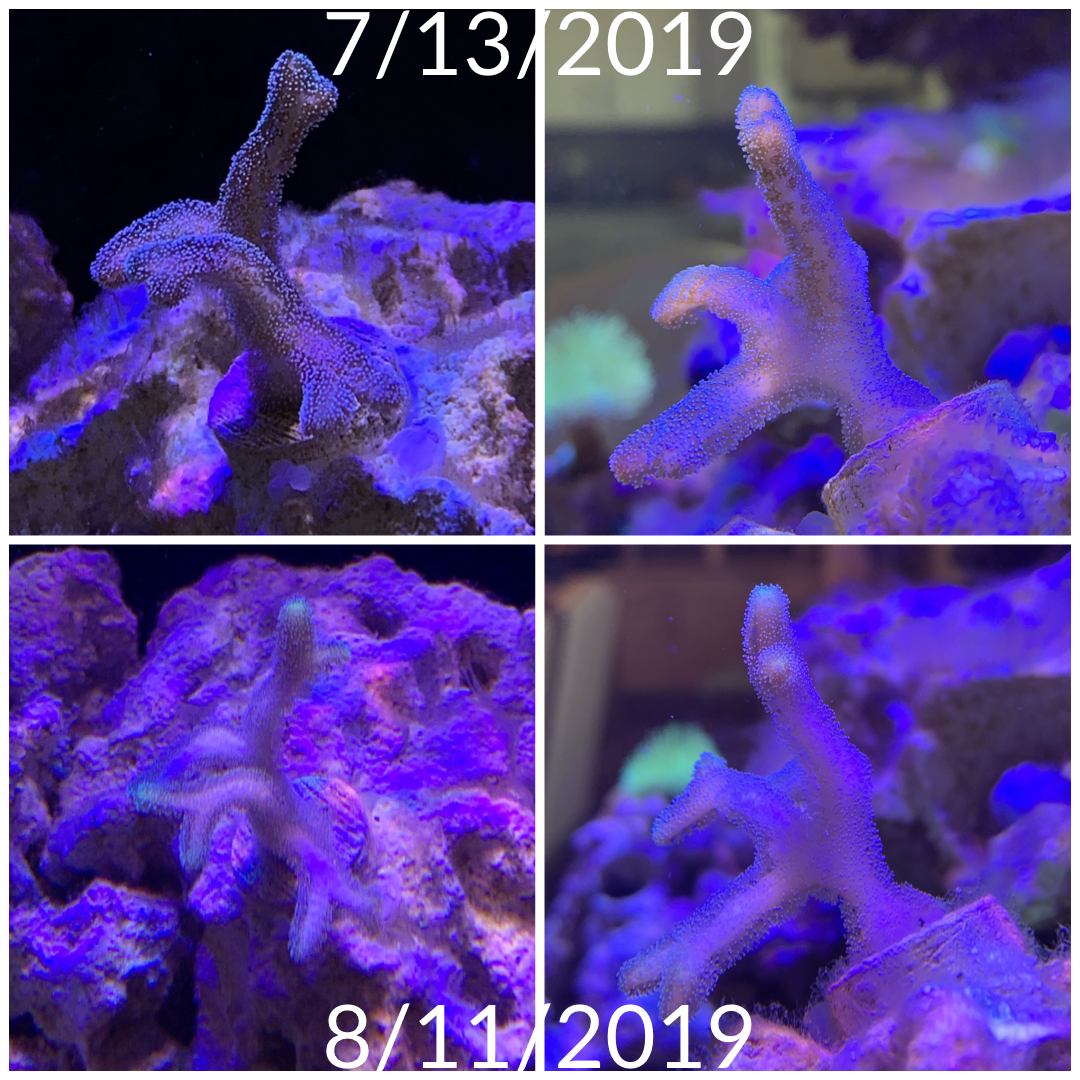 Someday the fence will be done and he will come play reef tank with us again....
OP

Yesterday I got a spigot installed in my basement so I can hook up the RO unit. I built a stand for the brutes and tested the first can. I still need to finish a few things but this will already make things easier. 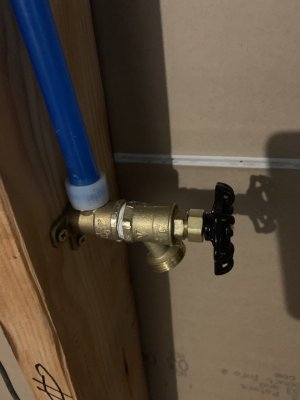 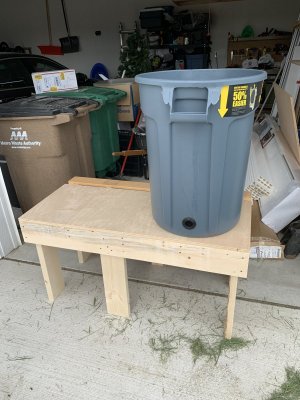 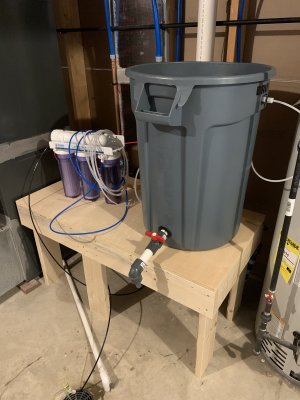 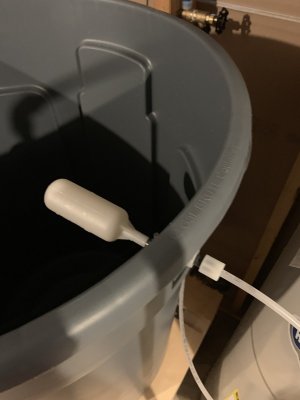 Big quality of life improvement there!

Awesome! Great news on the spigot and station going.