As promised, I've finally the time to start a build thread for my 40 breeder! This project is an upgrade from my previous 25 gallon rimless. I wanted to design something manageable and adaptable as I'll likely upgrade in the future. Most of the equipment can be moved to a larger tank. The other reason I decided on a 40 gallons, is the ease at which it can be moved. Apartment life in Cali does not lend to longevity...

For review, I'll give a brief overview of my 25 gallon as most equipment and rock work moved to this tank.

The initial setup was simple, stacked rock work, one MP10, and 10 gallon sump. It quickly evolved into much more. Before transitioning to the 40 gallon, the 25 became SPS dominant and running the following equipment: 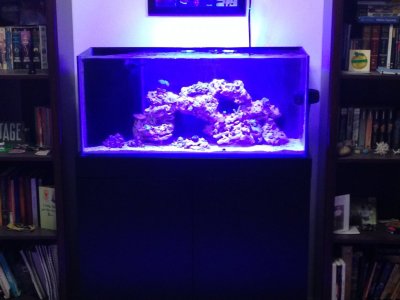 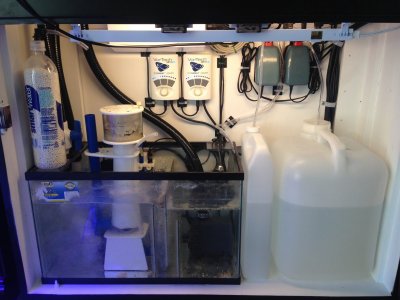 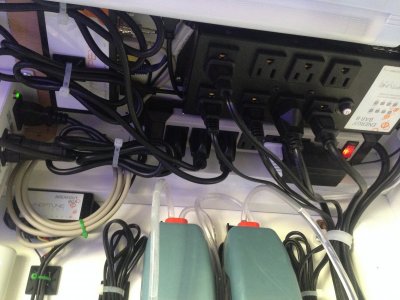 I'm a tech guy, love DIY and electrical projects. My background is manufacturing and CNC programming, so naturally, I have brought this passion into my reefing hobby. My first complete DIY project was a dosing pump build running on an Arduino board. I'll build a DIY thread when the time permits. This was built just before the move/upgrade. 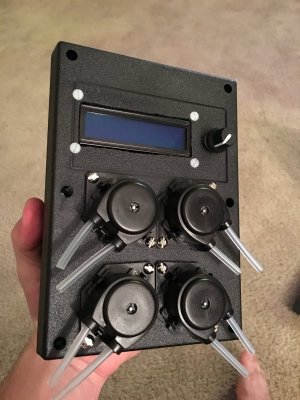 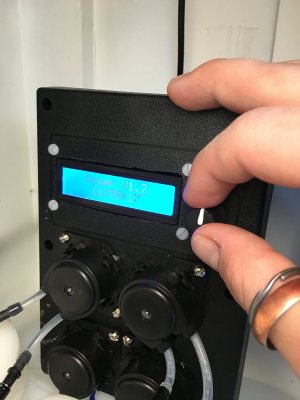 During the planning for the 40 gallon tank, I decided I wanted to try something different for rock work. As I started planning this tank a few months before moving, I was able to redo rock work and place it in my 25 gallon to cure. I also think it improved the look of the 25. The idea started with a few pictures I saw of a floating reef in which most of the sand was free of rock. It wasn't a week later I stumbled upon the following pieces at a local LFS. 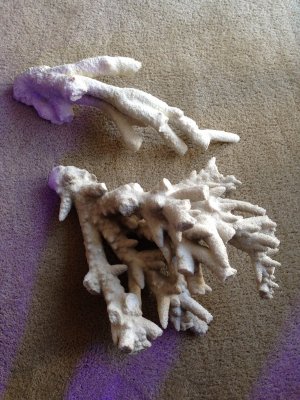 With a little manipulation (hammer and putty), it quickly came to life! 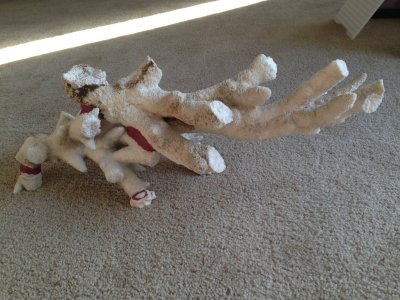 Here is a shot after placing it in the 25 gallon... 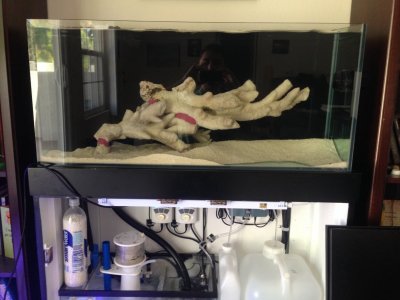 And with corals! You might also notice the T5 above the tank in this picture. I moved to T5 because the Radion didn't have enough spread to keep the sides of the corals healthy to my liking. Hence: back to T5's. 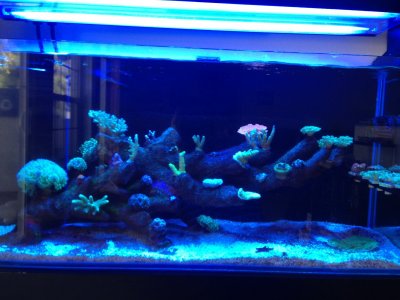 Okay, back to the 40 breeder! I wanted to go with a custom rimless, however, I knew it wouldn't be long before upgrading again. So, I decided a Pecto 40 breeder would suffice for now. The stand was designed using extruded aluminum from Misumi and ordered online. It took about a week to arrive. I highly recommend this type of stand, it's strong and light. Plus, the components can be cut and used for other projects if needed. 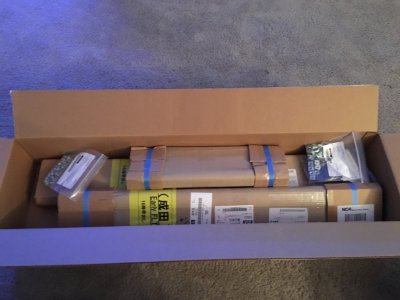 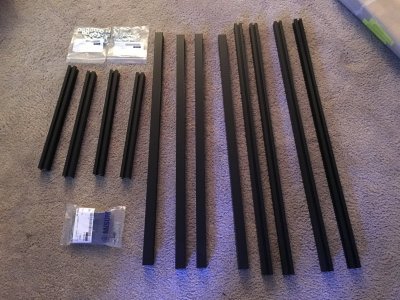 Most of the aluminum components have two sides smooth to make outside appearance much more clean. Although, I would not choose this if I had to again as it eliminates the possibility of using a groove for mounting door/skirting. 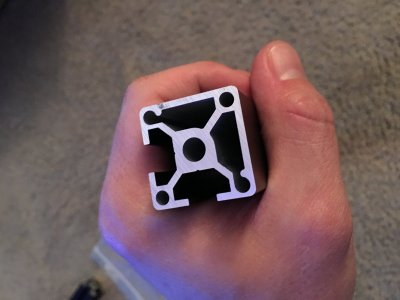 I apologize for not taking a picture once the stand was built, pictures of the entire setup will have to suffice. Once I started setting things up, a brilliant thought (at the time) came to mind. I would design a 3 chamber holding tank to handle top off and auto water changes! Yes, interesting idea, huh? To top it off, the sump was going to sit on top of this tank. I went so far as designing it, but got caught up in the complexity to finish it. One day I might do just that as I think it's a great way to optimize space under a tank. The tank slides out via under cabinet rollers about 6 inches so as to keep from overbalancing the entire setup. One chamber for RO, another empty, and the third holds new saltwater. The plan was for water to be removed from the tank and into the "empty" chamber. Once full, it could be drained and the cycle started over. The Apex would control everything via float switches and aqualifter pumps. Here is a picture of the design. 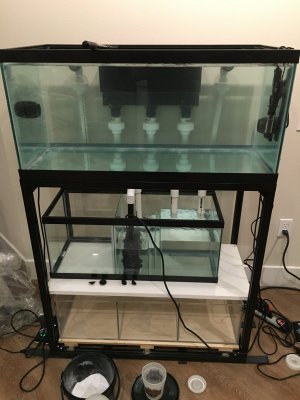 The 20 gallon long pictured above didn't have the room I wanted anyway. After doing much research, I went with a Icecap sump by Coral Vue. Little is known about them, little more is referenced outside of their website. But the fact it fit my dimensions and the inclusion of a 5.5 gallon reservoir for ATO was perfect! It's the model RS-30. 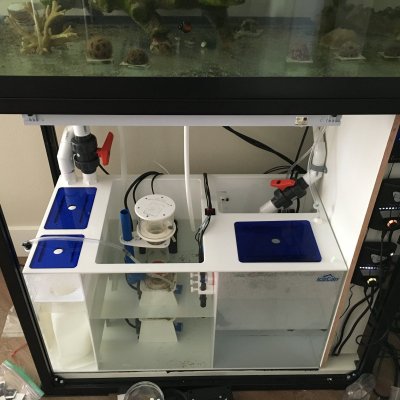 To be continued! I need some food...

Alright, back to it.

In the previous post I gave an outline to my thinking on this project, as well as a brief overview of the tank feeding this project. It would likely be easiest from here on out to give explain the tank as is and why I came to the decisions I have.

Current picture of the display: 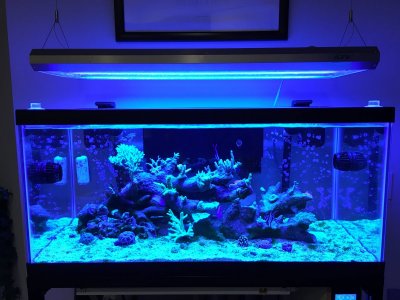 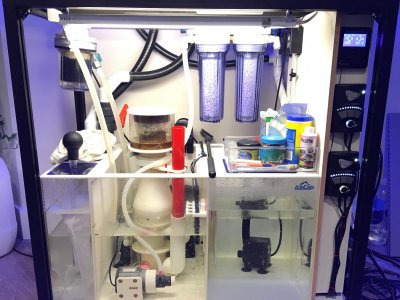 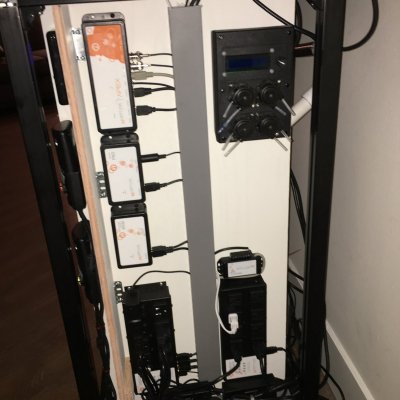 Thanks! It would be much better in a peninsula but I don't have the room in my apartment for such a tank...

MaddyP said:
Thanks! It would be much better in a peninsula but I don't have the room in my apartment for such a tank...
Click to expand...

I would love to build a room dividing peninsula tank. Some day, hopefully.
C

That is a sweet looking dosing pump. Are you willing to share your code?
OP

clownfish chris said:
That is a sweet looking dosing pump. Are you willing to share your code?
Click to expand...

Absolutely! I hold no liabaility for failures, even though it's been running 6 month on my tank. Shoot me a PM with your email and I'll send you the sketch.

Nice size tank . I like the 40 breeder. I think the only dimension I would change is make it even wider front to back. A full two feet. Glass cages will do it for 400 bucks but 400 vs 40 is an easy choice in my mind. Stand looks great too.

Be neat to see those corals grow in.

Here is a short video of my reef. Props to @revhtree for motivating us with free stuff to post pics and videos of our tanks!

Also, look forward to a post about a new dosing pump developed by @djbetterly soon to be used on this tank!

Here's a FTS for the new year! Moved the rock apart a little as I felt there wasn't enough balance between positive and negative space... 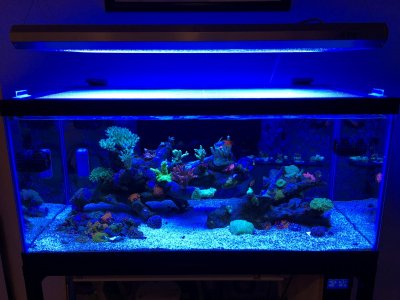 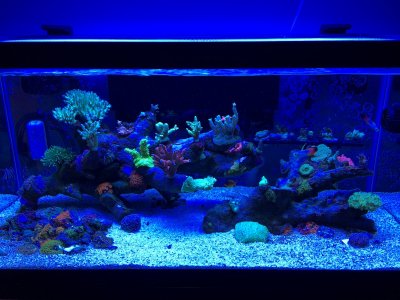 Looking good. I have the same tank and pretty much the same lights, so I am enjoying following the progress.
OP

Husker said:
Looking good. I have the same tank and pretty much the same lights, so I am enjoying following the progress.
Click to expand...

Yeah? It's like the perfect dimensions for a smaller tank! The next version of this tank is going to be a peninsula style...

Location
Nutley, NJ (AKA - The Nut)

Good things do come in small packages.. Nice setup and well thought out.