Dear readers, WARNING this is an account of my personal experience. Although I had a positive outcome, your experience may vary. Altering an EB832 may result in serious damage to person and/or property. Reader discretion is advised.


I had a bout of bad luck the other day when I heard popping noise emanating from the fish room. As I opened the door, I was met by a strong odor of burnt electronics, my ears directed me in zeroing in on the source of the popping, it was coming from one of my EB832's. I quickly removed it from power and went into crisis mode. I made short work of relocating and reprogramming the essential equipment to a nearby EB832.

Now that the tank companions were safe, I turned my attention to the problem. Water made it's way to the energy bar through an oversight on my part, a 1/4" tube began to drip just at the right spot to fall onto and eventually seep into the energy bar... What drag!!! Most of us have been there, the best laid plans are no match for murphy's law.

As I made my way to Marine Depot website to order another. I first decided to take it apart to see what the damage was. Upon opening it, I got familiar with the layout, it was somewhat modular making it easy for the manufacturer to conduct repairs while under warranty. However this was no warranty issue and complete neglect on my part.

The extent of my assessment was looking for obvious signs of damage. Carefully removing and visually checking each component, the problem appeared to be isolated to one part... It was fried

I posted this in my build thread with the intent to document it for others to read, but was asked to create a separate thread so that it can be searched out in case someone else runs into the same problem. The pictures I took weren't necessarily supposed to be a step by step but i'll try to make do with what I have. Hopefully lack of photos doesn't detract from someone wanting to do this themselves.

Being familiar with how the energy bar worked and the features it had, I easily detained that this was the 24vdc power supply. Having it in my hand, I started to think, this is about the same size as a 24v power brick, I wonder if I can get away with simply breaking one open and replacing the damaged component with the internals of a power brick?

I went onto amazon and found a 24v power brick that had the dimensions in the description and purchased it. It was only $20 and worth a try.

Deciphering the numbers on the old power supply, it's safe to assume that it was a 24V 4A. The one I linked is 5A, no big deal as long as the one purchased is not less than 4A and the physical dimensions are the same. 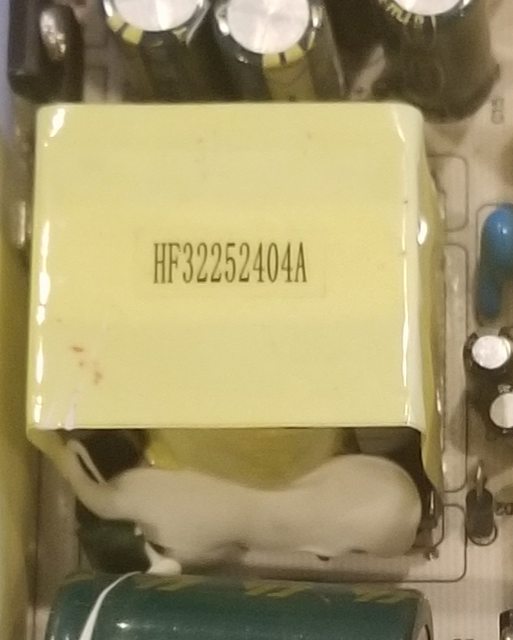 I don't have a pic of the power brick, nor how I cut it open. but the brick was sealed and needed to be pried apart. I personally used a band saw and cut through the plastic without damaging the components inside. It was messy and took some effort to get out.

Here's a side by side of the old and the new.

As you can tell, they're the exact same dimension only they are mirrored. The way that the old power supply was mounted to the EB832 casing made it impossible to mount the new one because the heat sinks were mirrored. But not to worry, because I imagine that Neptune Systems gets them in bulk and must've had the same issue. Molded into the EB832 plastic is 4 screw ports, however only 2 are used to secure the power supply. The old power supply used the 2 that are circled and the new power supply will have to use the ones with the arrow.

The next step will require a soldering iron or gun, because you're going to have to make some connections and remove this socket from the new power supply.

There's solder wick that can help remove the old solder but all I did was melt the solder of each of the 3 points individually while prying the socket apart with my free hand, I had to cycle through them multiple times to slowly pull the socket back but it took less than 2 minutes to do it this way.

Next is simply soldering the wires to the corresponding ports. Luckily for me, printed on the new power supply was L and N (Load and Neutral) which is the 110vac input to the power supply. The EB832 also has these letters printed on the board as well. I simply used the old wires from the energy bar to make those connections. If your new power supply doesn't have L and N, don't worry it will always be laid out like this. 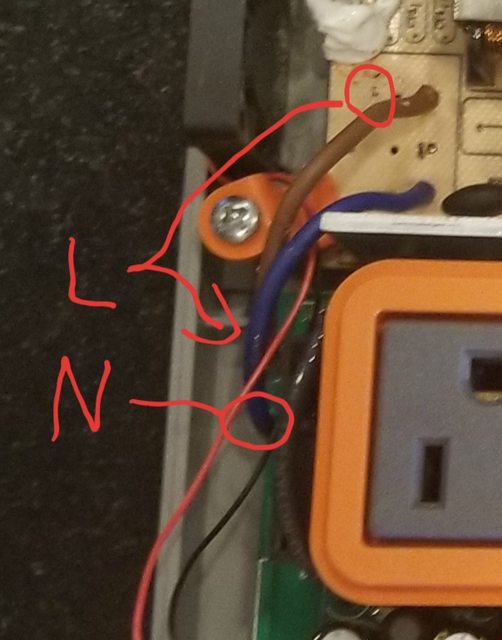 When I removed the old power supply, I clipped the 24vac wires in the middle which meant that I couldn't reuse them. So I simply soldered the wires together and used some heat shrink to protect the exposed solder joint.

Here it is all wired together and ready to be buttoned back up. I don't have steps for that, but if you took it apart, you should be able to put it back together.

Lucky for me the damage was isolated to the power supply and when I connected everything back to apex, it worked flawlessly. Each port in the EB832 cycled and I chalked this one up to a success. spending $20 vs $300 is a sigh of relief and a win in my book.

NOTE: Electing to undertake any DIY repairs can lead to a whole host of inherent risks. By choosing to do so you're waiving any liability to R2R and the manufacturer.
Last edited: Jul 20, 2020

Excellent!, and they said all that learning you did wouldn't pay off, I don't know if anybody actually said that to you. Good job on the fix!

Nicely done. I don’t trust myself with even simple soldering sadly.

Thanks for all the Fish

Nicely done. I’m sure others can use this. #MODS this would be a great article.

AZMSGT said:
Nicely done. I’m sure others can use this. #MODS this would be a great article.
Click to expand...

Agreed this is excellent!!!

Really nice job @Sisterlimonpot .
I am sure this will save several people a lot of money.

@Sisterlimonpot what was the LED indicator of the eb832 doing, before you attempted the 24v supply repair? Totally off? Blinking?
OP

TheHarold said:
@Sisterlimonpot what was the LED indicator of the eb832 doing, before you attempted the 24v supply repair? Totally off? Blinking?
Click to expand...

after removing 110v from the unit the NS logo remained steady orange, after removing the aqua bus cable, all the lights went out.

Very nice post! I just made a post about repairing the 12v power supply in an EB832, it is a very different issue and symptoms, but figured I should link it here in case anyone is trying to diagnose and fix their power bar

CAUTION- I am not liable for any damages to your person or property. This is offered as a possible solution to an electrical problem, and with this territory comes risk to your health and property that may not be directly mentioned. You should only attempt this repair if you are sure of your own...

Neptune Apex not connecting to EB832