I've purchased this IM tank with the goal to try and minimalize any major maintance and not going to stock it with harder to keep animals - but would like some corals and inverts too. I tend to do a ton of research before so this is the list of equipment and supplies I've acquired for this build.

Ended up getting some digital ones as I'm colorblind and having the digital versions make life for me a lot easier.

I started off pouring the entire bottle of BioSpira into the tank which was a pretty large bottle. Then I had some 10% Ammonia Hydroxide from Ace which I used on the freshwater tank a year ago. Put about a capful of that and here we are. The tank is currently on its 5th day cycling and has near 0ppm Ammonia 0.5ppm Nitrite and tons of Nitrate - when I tested Alk it was around 6.5 but I know this is because of the bacteria I'm building up. I really want to take this slow so I am adding a bit of Microbacter7 every other day to continue the cycle. Once the cycle is complete I'll water change and redose some of the ammonia to continue the cycle, at this speed I'll probably be looking at getting 2 clowns sometime in March.

I want to try and keep the easiest possible tank with "insurance" for the fish. The insurance I'm talking about will basically come from the refugium and UV light. While not necessary/ I'm sure, it hopefully will make things a little bit cleaner in terms of algae and the ugly phase that I'm sure will come. I have not got the Chaeto yet as it's out of stock but once I see it on Algae Barn I'll grab some. I'll add it prior to adding fish but want to wait for the bacteria to solidify first.

I have not run the skimmer yet, but it is a little bit louder than the rest of the tank, so I hopefully can run that periodically and the combination with the refugium will be helpful. Along with the Chemi-pure blue and Purigen (which go in the media racks) the filtering should be pretty good.

I'm new to reefing so let me know how I'm doing and any thoughts you might have on the build.

Here's a picture of the tank today, I have some tape covering the sand just so less light gets in and minimized any algea on the sand I can see on the bottom. It's not as bright as the picture may make it seem. I also have a cardboard peice that blocks light from a light strip I have behind the TV again to reduce the light on the tank right now. These will get removed with time. 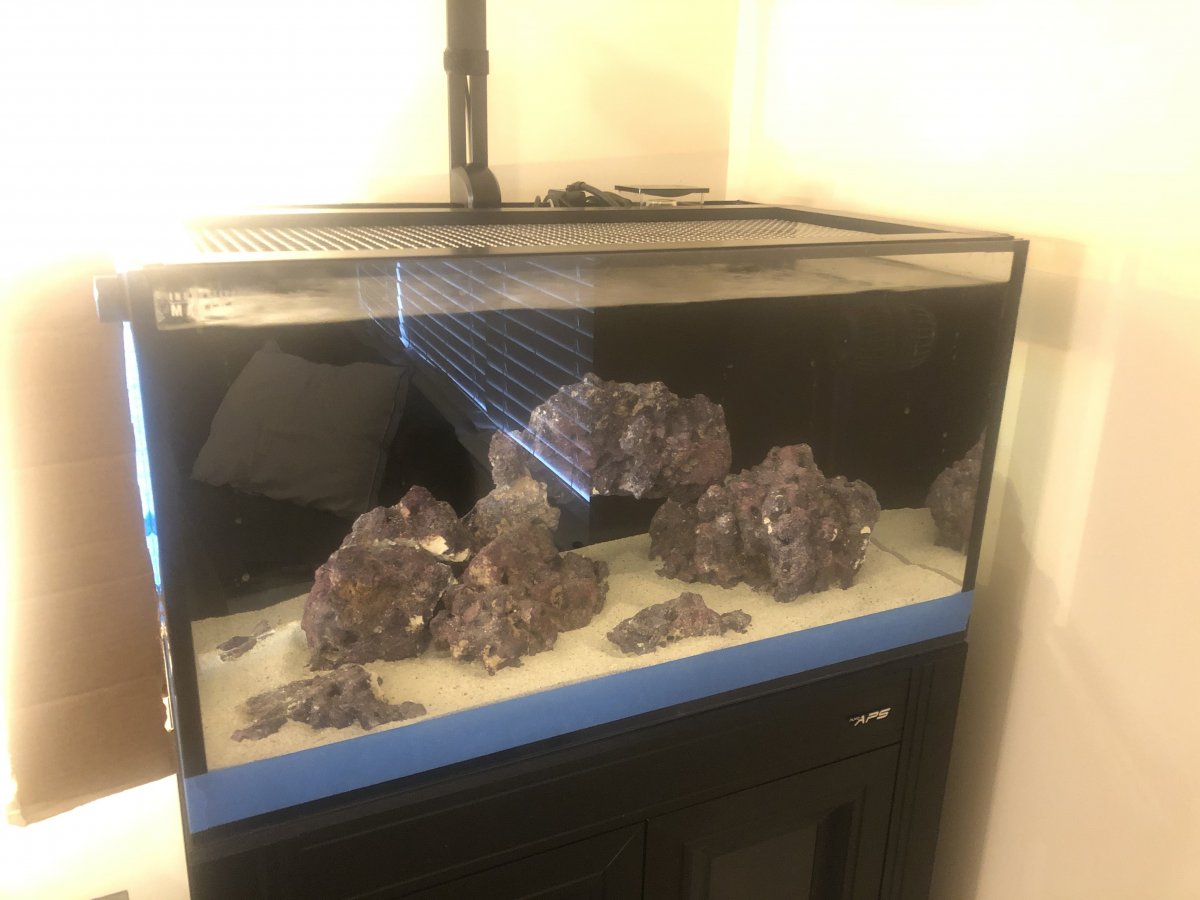 Nice. I debated going with this tank vs. the peninsula. Ended up going with the peninsula, but I liked the fact the regular 20 had more room in the back for exactly what you're running. I'm in the same boat but I started a couple of months or so ago. I threw some Macro algae in the display tank because I like the looks of it Dragon's Breath.
OP
F

Research Monkey said:
Nice. I debated going with this tank vs. the peninsula. Ended up going with the peninsula, but I liked the fact the regular 20 had more room in the back for exactly what you're running. I'm in the same boat but I started a couple of months or so ago. I threw some Macro algae in the display tank because I like the looks of it Dragon's Breath.
Click to expand...

Might end up getting a peninsula for the freshwater tank I have to upgrade that as well now. IM tanks were a huge upgrade from the aqueon tank I started with.

You have quite a nice setup. I have the same tank and stand. I use the JBJ ato with the 5 gallon glass IM reservoir. Fits perfectly in the stand. I run a Kessil 360. The skimmer is loud and I eventually pulled it out and do 3-5 gallon weekly water changes. You're going to love that tank.
OP
F

Just ordered an X1 Pro doser and some all for reef. This is probably about where the complexity of the equipment will end. Hoping dosing this will keep alk up and also be good for some more basic-moderate corals. Thinking softies and some LPS.

The two rocks I placed in front were for the "nuisance" corals GSP and Xenia, I like the flow they show and wanted to make sure they had their own island so I don't have to deal with trimming them back. In the back left I have another rock to put other corals on but I might move xenia back there instead, I'm worried that area might have higher flow because of the MP10 pushing into it and I want the xenia to pulse. Oh well, plenty of time to plan for that as that's probably months down the road at this point.

I have the almost same tank! The protein skimmer just needs to go through the break in phase i have the same skimmer and for about a month it was loud but after its quiet and works great! I have the 25 gal lagoon tank in my signature is my build thread. Im running a filter sock on one end and a media tray in the other. I also use a aqua clear HOB that I stuck on the back for any misc. media. Carbon, chemipure pads, etc. Normally it runs a bit low so I have to fill the tank up a lottttt but definitely worth it.

Looking forward to seeing the progress on this!!
OP
F

Small update, I wanted to put in a UV Sterilizer to try and get out front of any algae and other stuff that might get in the way. I originally had a Green Killing Machine 9W that fit nicely in the back. I ended up reading around on R2R that the pump would leak antimony into the water so I decided to pull that out of the tank after ~24 hours.

Ended up getting the Innovative Marine 9W UV that takes place of the filter sock. The media rack on the other side will have the "1st" stage with filter floss to take care of the filtering of solids, a lot easier to replace than an entire filter sock too. Stages 2 and 3 will have Purigen and Chemi-pure blue.

Getting pretty close on finishing the cycle. I initially dosed some ammonia in a small amount, and once that completed I wanted to do it again but dosed a bit too much ammonia. It pretty much converted to nitrite quickly but the Nitrites have not gone done too much yet, I see the beginning of the downward trend happening now. Probably another week or so.