I set up a 20 gal saltwater tank for a couple of hermit crabs my kids brought home from the beach last summer, and have been tinkering with and adding to it ever since (live rock, mangrove trees, sps coral, two clownfish and a bubble tip anemone). As of two weeks ago, water parameters were good and everything was doing nicely. Then Ida knocked the power out. When we evacuated, we took the critters and a small amount of live rock with us in a 10 gal tank. We arrived home last night and I’m now beginning the work of cleaning and rebuilding the 20 gal. There was a thick, gelatinous film over the water, and dead worms everywhere. Breaking the surface caused a strong rotten egg smell to escape. I’m attaching a pic of one of the rocks, as seen through the murky water, dead worms and all. I moved the live rocks to a 5 gal bucket and covered them with fresh salt water (see pic), then drained as much water from the tank as possible. Next I’ll be removing the sand and rinsing until it’s perfectly clear. 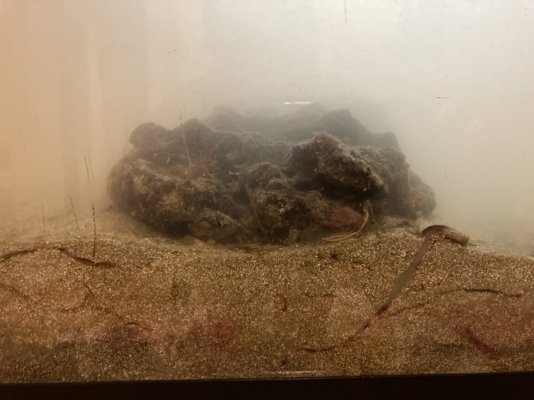 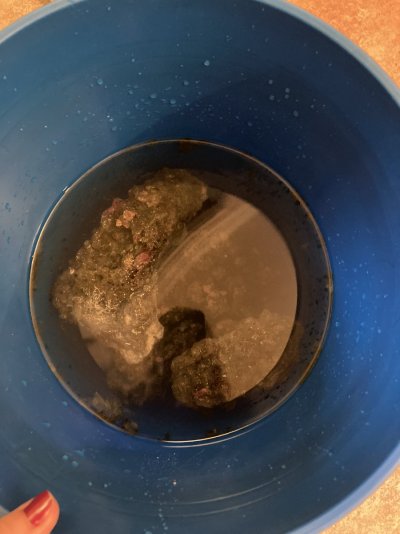 Sounds like you are going in the right direction
OP

Yesterday I washed all the sand (a little less than 30 lbs). First attempt, I filled 3 gal bucket 1/2 full of sand and rinsed it in deep sink, agitating frequently with long metal spoon. After 3 hrs water was still not running clear and rotten egg smell not fully dissipated. Second attempt, I filled 5 gal bucket 1/3 full and rinsed it with the garden hose outside, pushing hose to bottom and agitating constantly. After about an hour, water was fully clear and no smell remained. This method worked well to rinse the partial-clean sand still in the 3 gal bucket, which only took another 20 min or so (although there was higher degree of sand loss due to it being a bit too full of sand). The remainder of the sand from the tank filled the 5 gal 1/4 full, and it only took 30 min to fully rinse. In sum, if I had started with the 5 gal and the hose from the beginning, it would have taken about 2 hrs instead of 5. I moved all the sand into a plastic tote we use for storing winter clothes, and rinsed it again in the bathtub, using a fine mesh net to extract little black flakes and anything that looked like it could be part of a dead worm or other organic matter (I found very little, and this step with the net was probably overkill). Today I will do a final rinse of the sand with distilled water (RO water not available near me) to remove traces of tap water, clean the tank and move the sand back in. If I have time/energy, I’ll start scraping the live rocks with a knife to remove dead organic matter. Here are some pics of the sand rinsing process.

Today I cleaned the 20 gal and did a final rinse of the sand with distilled water. I put the sand back in and began filling the tank with freshly mixed saltwater. I went ahead and re-planted the mangroves as well, because the powerhead in the 10 gal dislodges them, and they have been looking a little droopy from just sitting in water for a week). I then scraped the smallest of the live rocks with a knife, really digging into nooks and crannies, which took about 40 min. You can see how much stuff came off in the before and after pics. I mixed up 2 gal of saltwater in a 5 gal bucket, held the rock under the water, and used the powerhead to blast off any remaining gunk. Then I placed the “clean” rock in the tank. I’ll try to do the two larger rocks tomorrow, but one of them is massive and I’m starting to become daunted.

Today I cleaned the second rock (took about an hour) and the filter (in a bucket of fresh saltwater), and put them both back in the 20 gal. I noticed a slight rotten egg smell after running the filter for awhile, but hopefully that will pass. I’m intrigued by a suggestion I received to try a filter-free setup with only live rocks for filtration, and am hoping to learn more about that, but since I don’t currently have any other way to aerate/circulate the 20 gal, I’m using the filter for now (see pic). It moves 211 gph. Hopefully that will be sufficient for the skip cycle I’m trying to achieve. I used to have two filters and a powerhead in there, but those are in the 10 gal at the moment. Here’s a pic of the critters patiently watching their home be rebuilt. I cleaned their filter and did a 20% water change for them today as well, because the nitrates in the 10 gal were starting to creep up. Before the storm came through, I hadn’t done a water change in months (just topped the tank off with fresh water occasionally to counter evaporation), and I’m hoping to get back to that place soon via skip cycle

First of all I'm sorry for anything that happened due to the hurricane, I hope you and your family are well. Hurricane Grace hit my city 3 weeks ago and was devastating, but now it's calm again.
It seems to me that the live rock will heal again in the tank while it works again, it's very likely that you will see ammonia peaks, you must prepare to mix enough new water because you will surely need it, excellent process with washing the sand although honestly I would have saved all the work and bet on live sand, good job so far, that tank will look pretty good once the process is finished.
OP

Although the third rock was much bigger than the other two, it didn’t take nearly as long to clean as I feared (about 1.5 hrs). It had no egg smell and very little dead stuff clinging to it, but there was a large amount of green hair algae, seemingly very much alive. The knife wasn’t removing it effectively, so I used a heavy-duty pipe cleaner, which worked pretty well (although I had to work with the rock submerged in a bucket of water in order to really see the algae clearly, which was kind of awkward). The tank no longer has a noticeable egg smell, but when I remove the other two rocks, I can still smell it on them. It’s interesting how these rocks reacted differently to the tank crash. I got the first two rocks (and the ones now in the 10 gal) from a FL marine supply company, back when we only had hermit crabs in the tank, and they came with a bunch of hitchhikers. It seemed great at the time, as my kids enjoyed watching all the limpets, worms, aiptaisia, etc. It was only later that I learned about the problems they can cause. I got the third rock from my LFS (the bubble tip was attached to it) and I assume it had been properly cured. It’s in the tank now too (see pic) and hopefully most of the “hard” work is done. I’ll test the water parameters repeatedly over the next couple of days, to make sure it’s safe to start putting the critters in.

ammonia and nitrite testing is where your rebuild can go off track, and cause the addition of new mixes into the clean water in reaction.

right now you're googling failed cycle to retro find that example, hoping its from this year at least, and seeing still only more of my diatribe, is that funny or not types of cycles: -dry rock with bottle bac and wait for params to line up, add fish when api permits dry rock and bottle...

skip all nitrite testing, it is no longer factored in updated cycling science at any phase in reefing, cycle to tank maturity. nitrite is omitted now in all troubleshoots for reasons covered in Randy's nitrite article.

you assembled a clean tank above using known active surfaces, its remaining clean vs cloudy, the nh3 is running in control as a result. test kits that aren't seneye need further reductions applied to the initial read, to be valid for saltwater feedback. folks only report the unadjusted numbers which we'd factor in freshwater setups, non seneye testing can set your thread back. its ready for bioload now because it remained cloud free.

your careful and surgical rebuild made your tank align exactly with skip cycle setups above, well done clean build here. knowing its ready for animals gets them in there quicker vs more time in holding.
Last edited: Sep 13, 2021
OP

I repatriated the critters about 36 hours ago and everything seems more or less okay (except for the mangroves, which have looked sad for days and are now losing their leaves). The fish and crabs are thrilled, and are eating normally. The coral seems to be doing a little better too; the polyps seem are out more than they had been in the 10 gal (unfortunately you can’t tell this from the pic b/c one of the crabs had just tromped all over it, but it’s in the top center of the tank). The bubble tip anemone is not particularly “bubbly” - the tendrils look more like noodles (see bottom right side of tank). I suspect it’s the PH. In the past, I’ve experienced an issue where I had trouble raising PH to 8.4 without sending alkalinity through the roof. When I tested tonight, both were a little low, so I added some Coralife Superbuffer. I have been monitoring nitrate, nitrite, alk and PH with Tetra EasyStrips and calcium and phosphate with API kits. Due to the issue I previously had, I splurged and ordered the Hanna PH and alk checkers a couple days after I got back to New Orleans (though they haven’t arrived yet - deliveries are still slow from the storm). Now I’m kind of wishing I had saved my money to spend on Seneye; it looks like an amazing product! Anyway, here’s an FTS.

Wonderful, it’s a perfectly clear laser rebuild really it is!

A week without power - Recoverable?
2

Lost Everything To Ida - How to Protect Your Reef Investment?
2 3 4 5