I am a tank caretaker at our college and we have this interesting case I wanted to share in case anyone recognizes it. This female clown is in a 30gal SW tank with a purple dottyback. Other inhabitants are really large toadstool, CUC (urchin, green emerald crabs, hermits, snails, etc), some hammer coral, and lots of manjano anemones (I know! they don't look that bad though). The male clown was removed because of continuous fighting. Both clowns and the dottyback have been in this tank for over 5yrs (that we know of, every year a new student takes care of the tank). The clowns were separated in Jan 2021 because the male was continuously beat up, the cranial half of the dorsal fin was actually devitalized and sloughed off. He is with a foster and is doing great. However, the female continuous to present with this recurring lesion near her R pectoral fin.

This lesion was first noted in first week of Jan. We performed several wet mounts and looked under microscope and had no findings. The wound was open and fleshy, so we decided to treat topically with neosporin once a day. We stopped treatment at day 12 because her wound was almost completely healed and she had stopped eating. We were unsure if this was because of separation from the male or from the stress of us treating her once a day (which is another reason why we stopped treatment). After that, she's been eating regularly and the wound was gone.

Until Feb 18th when the wound reappeared. In Jan, we assumed it was a wound from fighting. Although it is in an unusual spot for a fighting wound, the consistency in the tank (no new tank mates, consistent water quality with weekly water changes) we concluded fighting as the main culprit. Now we do not know. Performed more wet mounts, no findings. This time I did not treat with neosporin to see what happens, and the lesion went away on its own.

Like I stated, both clowns have been in this tank for at least 5 yrs. They have a reputation for fighting, so they've had injuries and lesions before, but this is different. The clowns also laid eggs regularly. Separating them has shown that this particular lesion is not from fighting, and honestly the smaller male is thriving having an anemone all to himself in his new tank. He has significantly improved (not just from his injuries, but color is more vibrant and he's very active). No concerns have been noted in the other fish in tank that he was moved to. I cannot say the same for the female, her color is not as vibrant, but she is at least eating regularly.

Theories include:
We are going to try and make a stained slide to see if anything pops up. She seems to be doing fine so there is no rush to perform additional diagnostics at this time, but if the lesion appears a third time, we will proceed with more diagnostics.

Attached are photos from different days/times so you can see the progression of the lesion. (I know they are blurry, I apologize in advance).

What do you guys think? Thank you for your time! Will post any updates as they happen 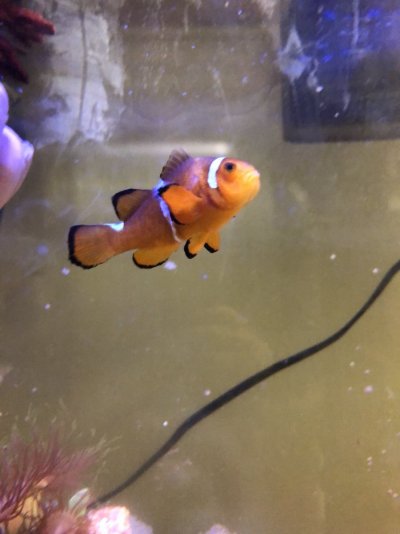 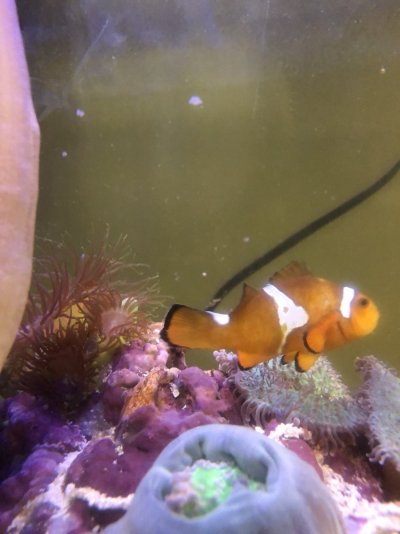 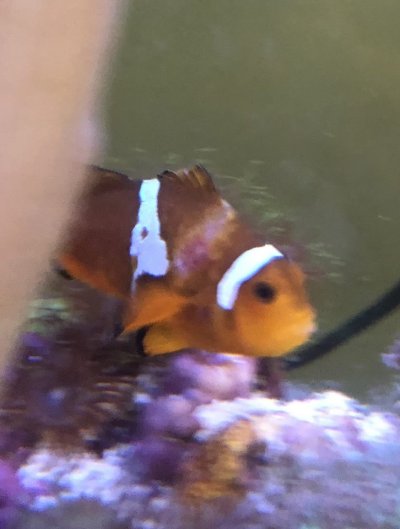 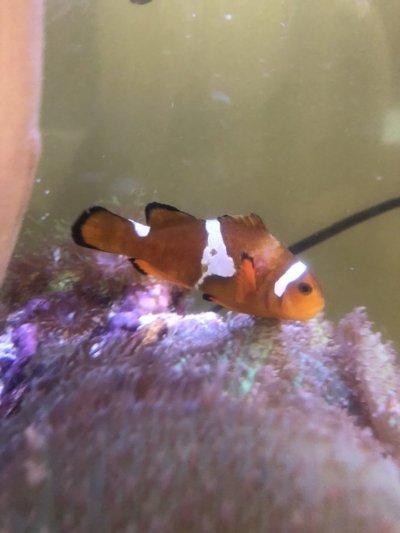 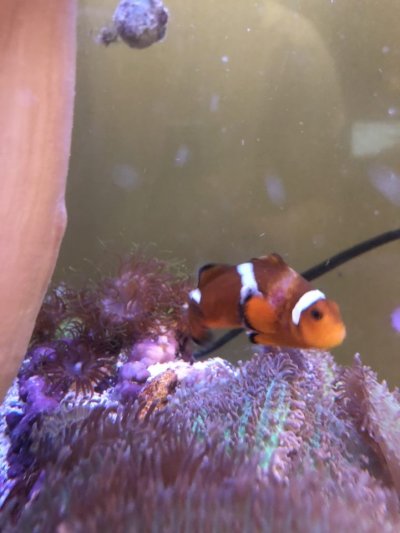 To clarify, lesion first appeared in Jan, went away after 12d treatment with neosporin. Lesion reappeared Feb 18th and went away in about the same with no treatment.

Mycobacteriosis is a common “catch all” diagnosis when a fish has a problem that defies other diagnosis. However, in this case your fish is clearly showing multiple symptoms of myco: the skin lesion, poor color, fin erosion and odd body shape. It really checks all the boxes. Granulomas won’t be seen in skin lesions, more commonly seen in the liver or other organs.
As you no doubt know, myco isn’t a treatable condition. It can be isolated from most environments, even our frozen fish foods have it. It just shows up as a chronic disease in older, compromised fish.
Jay
OP

I really appreciate your response! So she's most likely immunocompromised?

Time to revaluate her care/tank care with the rest of the crew then. Would you consider age as main factor? She’s at least 5 (could be much older, we don't know when this tank was set up) but I’ve heard of clowns living into their 20s. We switched over from dry pellet feed to frozen mysis/brine shrimp and both fish love it. I will say the tank was not in the best condition when we took over after school being shut down almost all summer because of covid and one poor guy managing all the tanks. However that was a while ago and this tank has seen regular maintenance since August. Nothing on our water quality tests have raised any eyebrows either.

Any recommendations when it comes to the flare ups? A quick google search shows that Neosporin is ineffective for the myco, but should I be concerned about potential secondary infections? (Or probably not worth the stress pulling her out of the tank once a day for treatment?)

What about lowering the salinity of the tank to help decrease her metabolic demands/osmoregulate easier? (We have very low maintenance corals in that tank. I do have that other purple dottyback in there too.)

Thank you so much for your guidance and expertise!

Once fish start showing major signs of myco, there really isn't much to be done for them. If you could move the fish to a treatment tank, you could consider dosing with a broad spectrum, gram negative antibiotic for the external lesion (like neoplex). I don't use topicals on fish as there is no proof that they adhere long enough for any benefit. Some people use higher dose antibiotics as a short term bath - for example, doubling the dose and the treating the fish in a bucket with a heater and an air stone for 3 hours a day. Still, the myco itself caqn't be cured, sorry!

Thanks so much for your help!
OP

UPDATE 3/3/21: Went last night to feed and noticed another lesion on her L side. Lesion on R side almost gone. Made wet mounts of both sides and saw something suspicious to my untrained eye. We are thinking Scuticociliatosis (Uronemosis) but unsure since that causes a quick death and that's not our case. Mycobacterium still on our differential list. We sent our results and a video of the fish to our aquatics vet, reaching out here in the meantime in case this looks familiar!

Nevertheless, we were excited to finally see something on a mount, puts us one step closer to a diagnosis.

Wow, I wish I could help with the fish but I have to say I am so impressed with how detailed you are. Are you studying to become a Marine Biologist?
OP

Update! Vet says most likely Trichodina, we didn't think it was this because they weren't moving, but apparently they can die pretty quickly and we had to walk across campus to use a microscope so maybe they died in transport. Trichodina are usually nonpathogenic but can colonize a wound so its still possible she has a mycobacterium causing her primary lesions and we just happened to find the Trichodina in her wound on the wet mount. Going to do a freshwater dip and monitor.

And thanks! I'm in veterinary school. Reefing is a personal hobby and the aquatics club maintains tanks on campus and I'm part of that team. This is all very interesting, in a way, this clown has been my first aquatics patient! Grateful to have access to an aquatics vet and Reef2Reef!

Ancarol2421 said:
Update! Vet says most likely Trichodina, we didn't think it was this because they weren't moving, but apparently they can die pretty quickly and we had to walk across campus to use a microscope so maybe they died in transport. Trichodina are usually nonpathogenic but can colonize a wound so its still possible she has a mycobacterium causing her primary lesions and we just happened to find the Trichodina in her wound on the wet mount. Going to do a freshwater dip and monitor.

And thanks! I'm in veterinary school. Reefing is a personal hobby and the aquatics club maintains tanks on campus and I'm part of that team. This is all very interesting, in a way, this clown has been my first aquatics patient! Grateful to have access to an aquatics vet and Reef2Reef!
Click to expand...

Trichidina is only rarely reported in marine aquarium fish, I’ve never actually seen a case myself. Even if they are not moving, the pattern of the denticles would be diagnostic. Pretty easy to deal with in FW using formalin.
Jay

Lesion on one spot foxface

EMERGENCY Mycobacterium? Something else?
2