September 3rd 21;
So, I have had my Red Sea Max Nano running for about.. 6 months, it has been running since March 12th 2021, unfortunately I don’t have images of setting it up but I can give you information on how it goes from now on,

So, from the start:

it got its first few animals in around 3 weeks after being set up (It was perfectly stable) and they were a Golden dwarf boxer shrimp and a yasha goby, both are still alive and well today, then it had the addition of a pink streaked wrasse to replace the possum wrasse that unfortunately passed in the old tank because of an urchin, but then it finally got its first coral which was a Florida Ricordea in July, and recently it has been going through a cyano outbreak which is unfortunate, this was my second tank of two, I’ll start a build thread on the other when the white lights are back on because blue just doesn’t give it justice 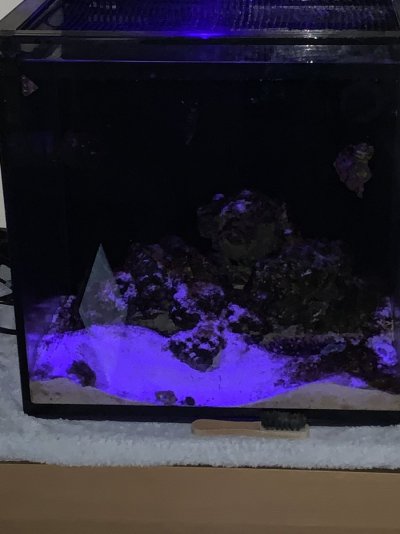 Rating - 0%
0   0   0
The cryptic wrasse is currently hiding but I can see where it’s sleeping, in the morning I will most definitely get a picture of it (I’m unsure of the gender but I think male)

I also forgot to say but it got a dot dash Blenny in June and he’s been amazing and filled with personality
And there’s also a Cirrhilabrus Naokoae currently being temporarily housed in this tank since he’s only around 1 inch and the big wrasse I own are around 2 all the way to a 3 inch Scott’s wrasse
Last edited: Sep 3, 2021
OP 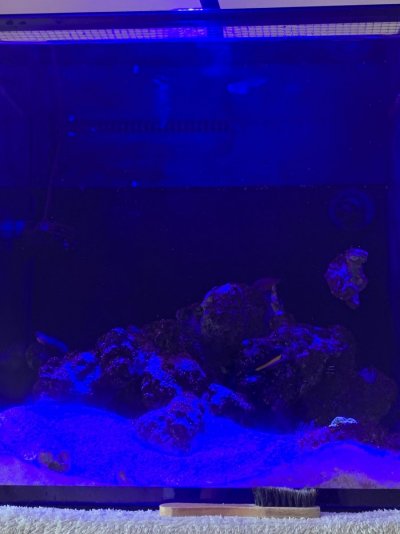 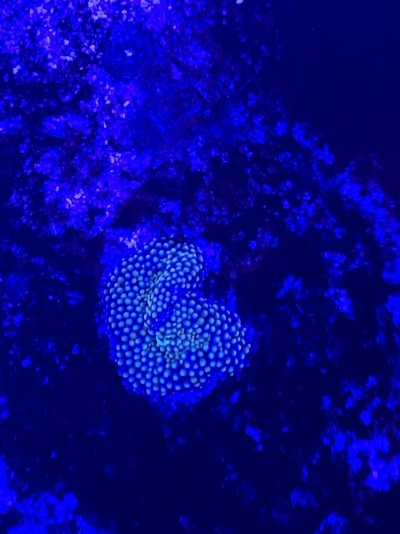 i cant think said:
It’s a very bad picture but I think if I get much closer then the two wrasses will be spooked
Click to expand...

Yes! They’re so underrated because of them being closely related to the pseudocheilinus wrasse and because they’re ‘cryptic’ in the LFS

Rating - 0%
0   0   0
I added a 1” M. bipartitus (I’m aware it won’t be able to sustain her long term, this isn’t a long term plan) until she gets to around 2-3” then she’ll transfer to the 4’ tank. Yes, my nano can hold the naoko & Leopard, I do weekly water changes and clean the sock out Atleast twice a week. she has had a peaceful introduction, I think she finally decided the sand bed was a perfect place to hide so I’ll attach a picture I got in the first 5 minutes of being at home 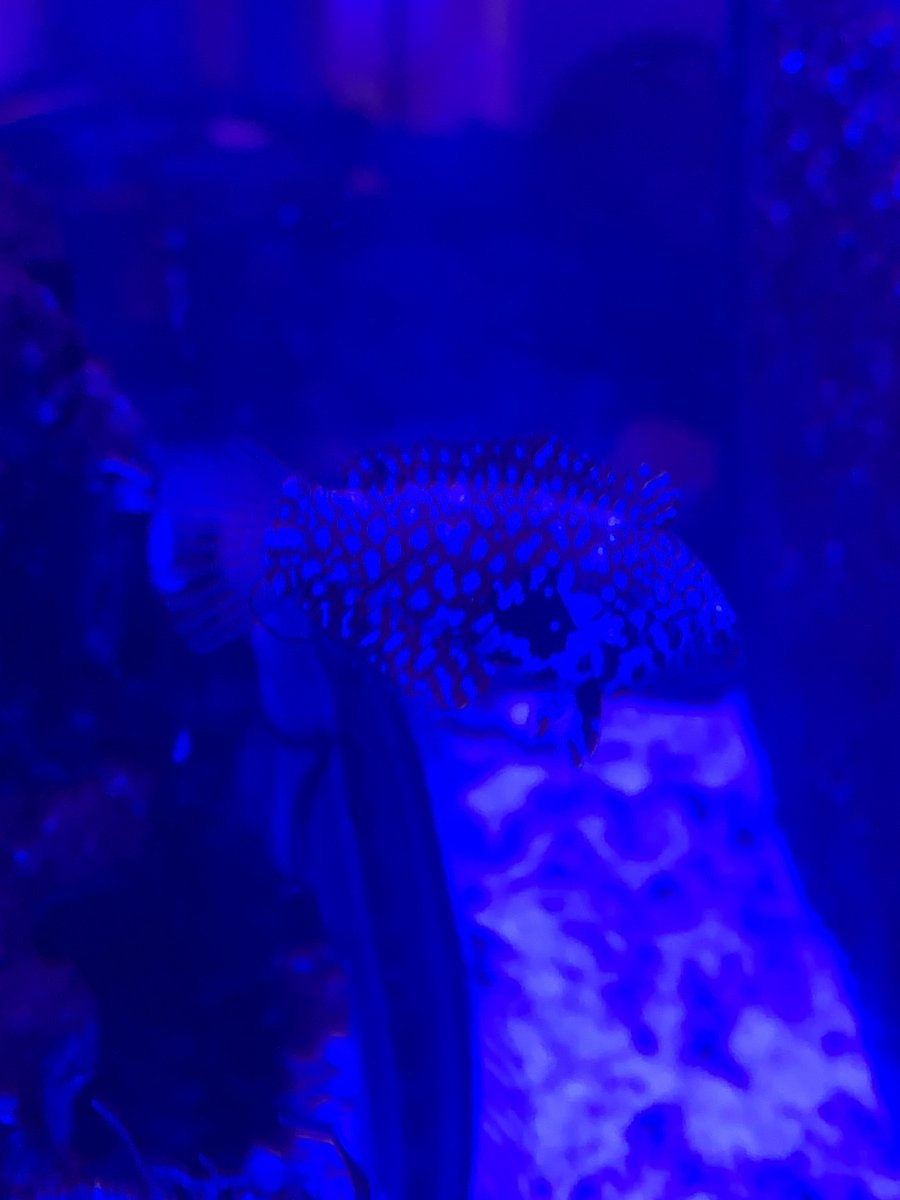 Rating - 0%
0   0   0
Just a quick question:
What macroalgae looks nice in your opinion?
I’m thinking on some gracilliara and caulerpa taxilfolia

TriggersAmuck said:
I'm a fan of the Gracilliara, but what matters is your own sense of aesthetic.
Click to expand...

That’s true, I’m just struggling on thoughts of macroalgae (I only recently got the hang of corals, scientific names for fish have been a thing I’ve known for around 6 years)
OP

Rating - 0%
0   0   0
So I ended up getting some “Sea grapes” and put them in the foreground since they seem to be growing more out than tall - Also just an excuse because It kept getting caught by the flow and taking a swim. 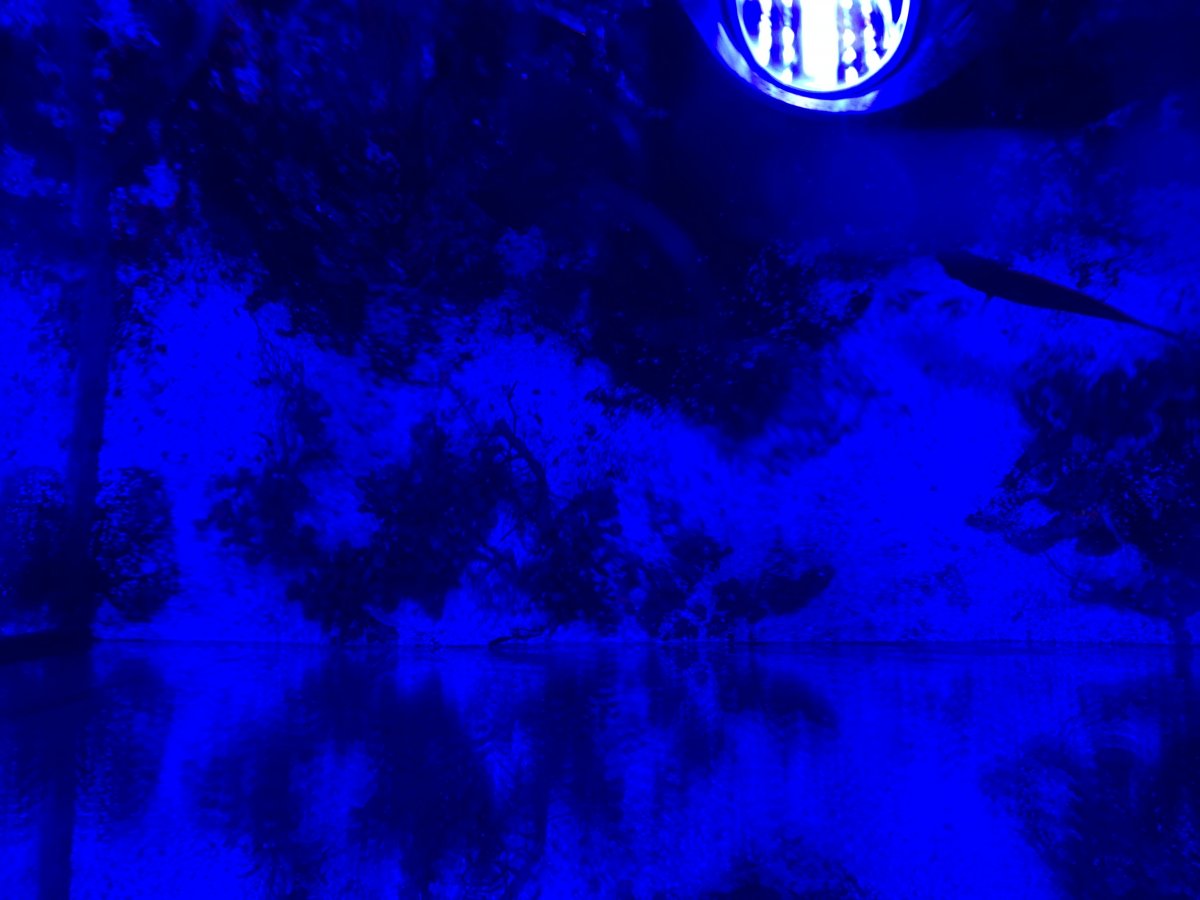 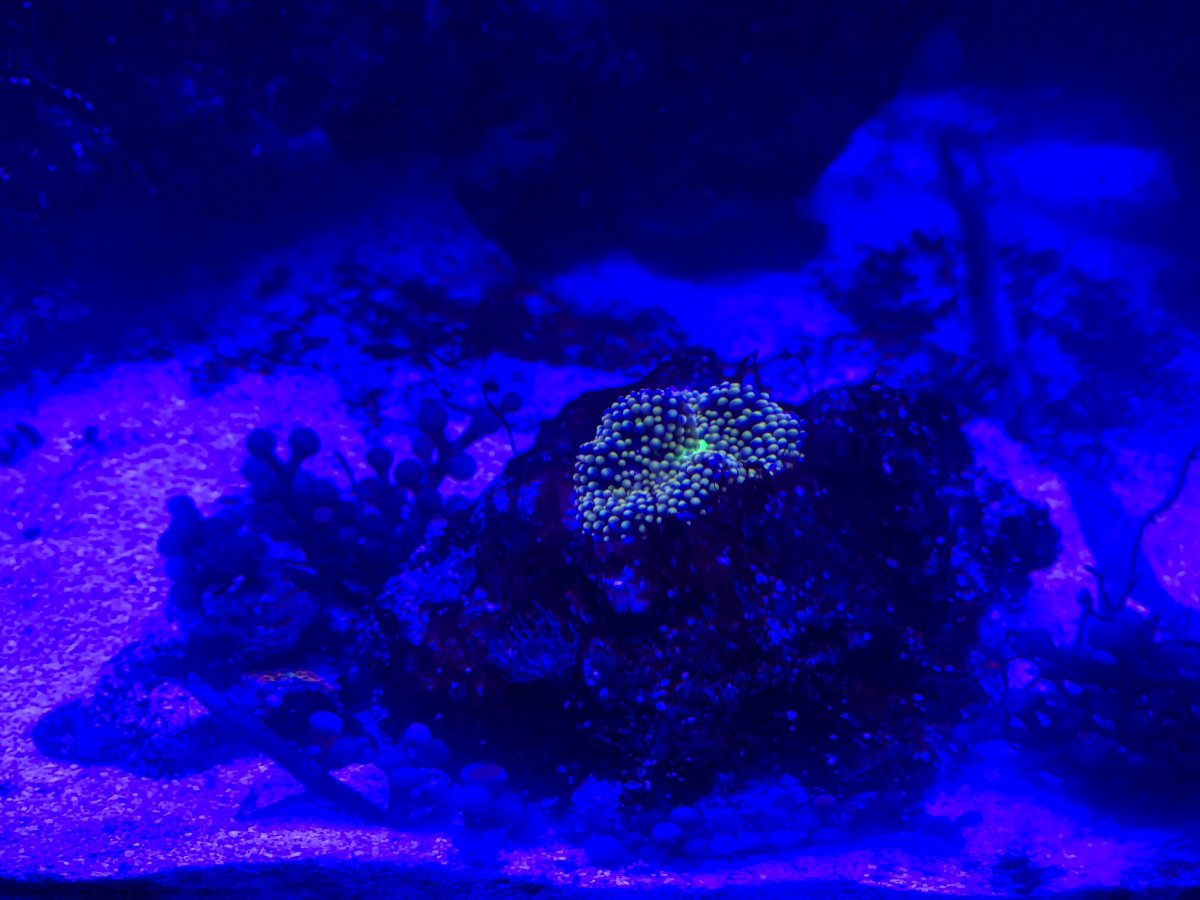 Rating - 0%
0   0   0
Hah.. this update is how my wrasse finally got his name:
So earlier I did a full water change, the pumps and everything. My naoko decided that when I took the returning flow part out he squeezed into the gap and through the grid he went, all the way to the bottom of the sump.
2-3 hours later and I realise he hasn’t shown up (I didn’t know he had gone to the sump) so I kept watching the tank for another hour or so and he still didn’t show. I left the lights for for around 1 hour then turned them on again to see if he would have thought it was a new day. Still no appearance of the wrasse and that’s when I knew something was wrong. I looked all over the floor and in ever crevice I know he sleeps in. He was nowhere, so then I wait around 2 hours later and my gut thinks to check in the back sump again with a torch. I did it and a stream of red shows up, I then went to get a net and bucket, empty everything out of the sump (Over the span of like 10 minutes) then the wrasse is just gone, I looked at the other side of the sump and red was there, eventually after a lot of back and forth S, I took out the top piece and the over flow. I finally got him around 10 minutes ago and he is not sleeping back in the crevice with the yasha goby. I named him sump wrasse because he survived around 6-7 hours in a sump with a heater on the bottom (Where he stayed around) and I have yet to see burn marks which was shocking to me.
I’m unsure if he will live however he did come out of stress colours after a minute or so in the corner of the DT so he probably will.
Last edited: Oct 3, 2021

Rating - 0%
0   0   0
He’s out with a bit of a discoloured belly which I find is just stress from what happened. He seems to be less stressed now though. 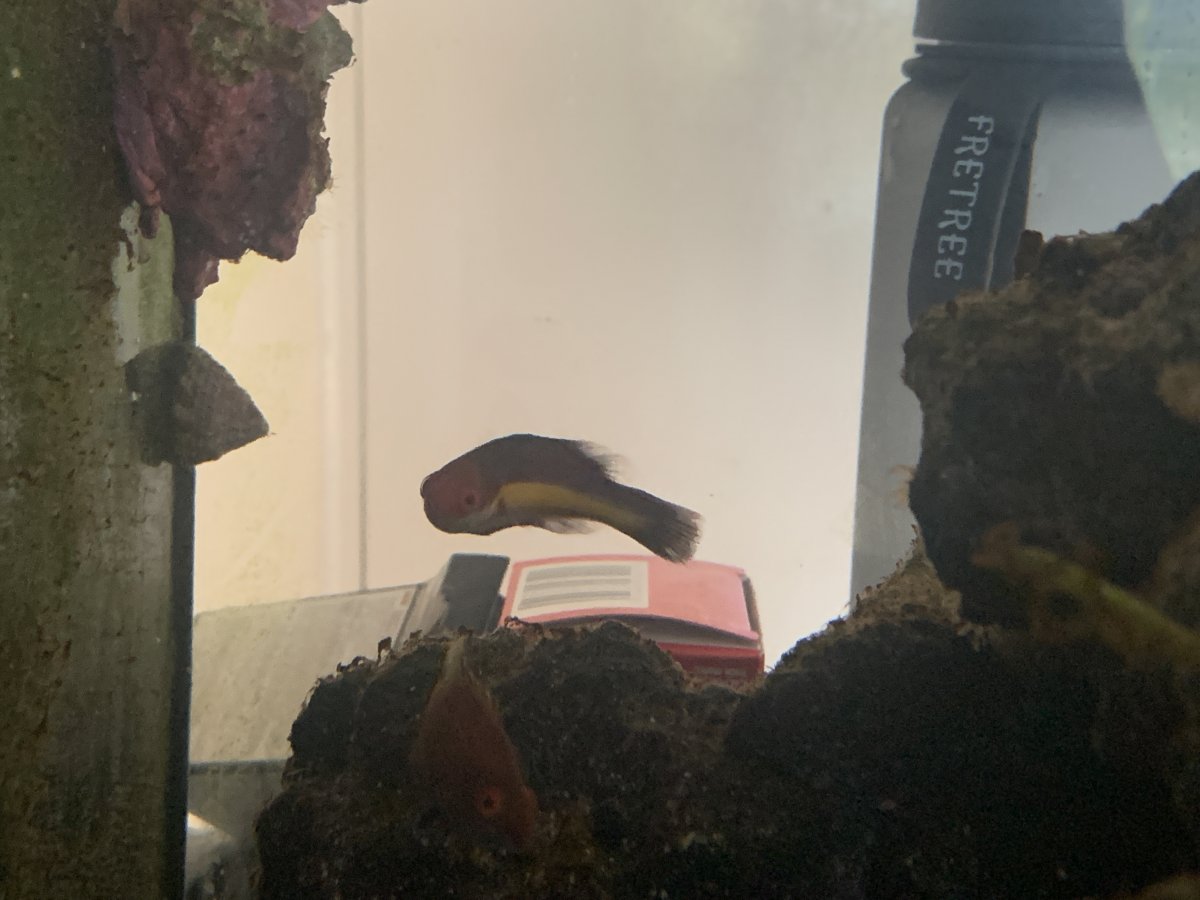 He’s the happiest PITA now, eating and not stressed. If I see two females in the LFS and I had room for them, then for sure I’d love to get them for him.
Last edited: Oct 10, 2021
OP

Rating - 0%
0   0   0
I got two new corals for this tank. Because it’s only 6 months old I got a small green Hammer, and also got a freebie Montipora digitata so hopefully I can get that to grow in this tank. 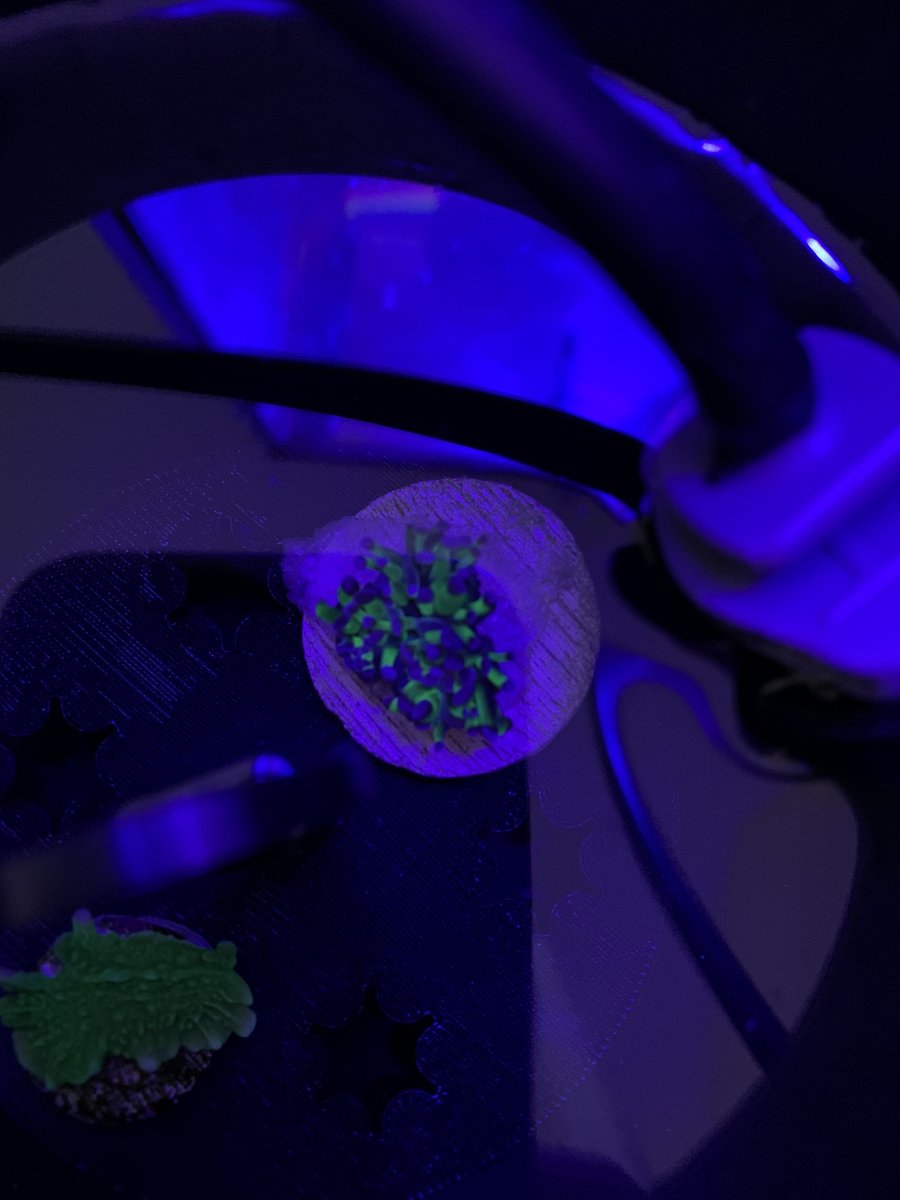 I took the chance to get a relatively good photo of both that wasn’t blued out completely. The bucket is small but it’s good for things like coral and small fish such as Cryptic six lines and ~1” fish
Last edited: Oct 11, 2021
OP 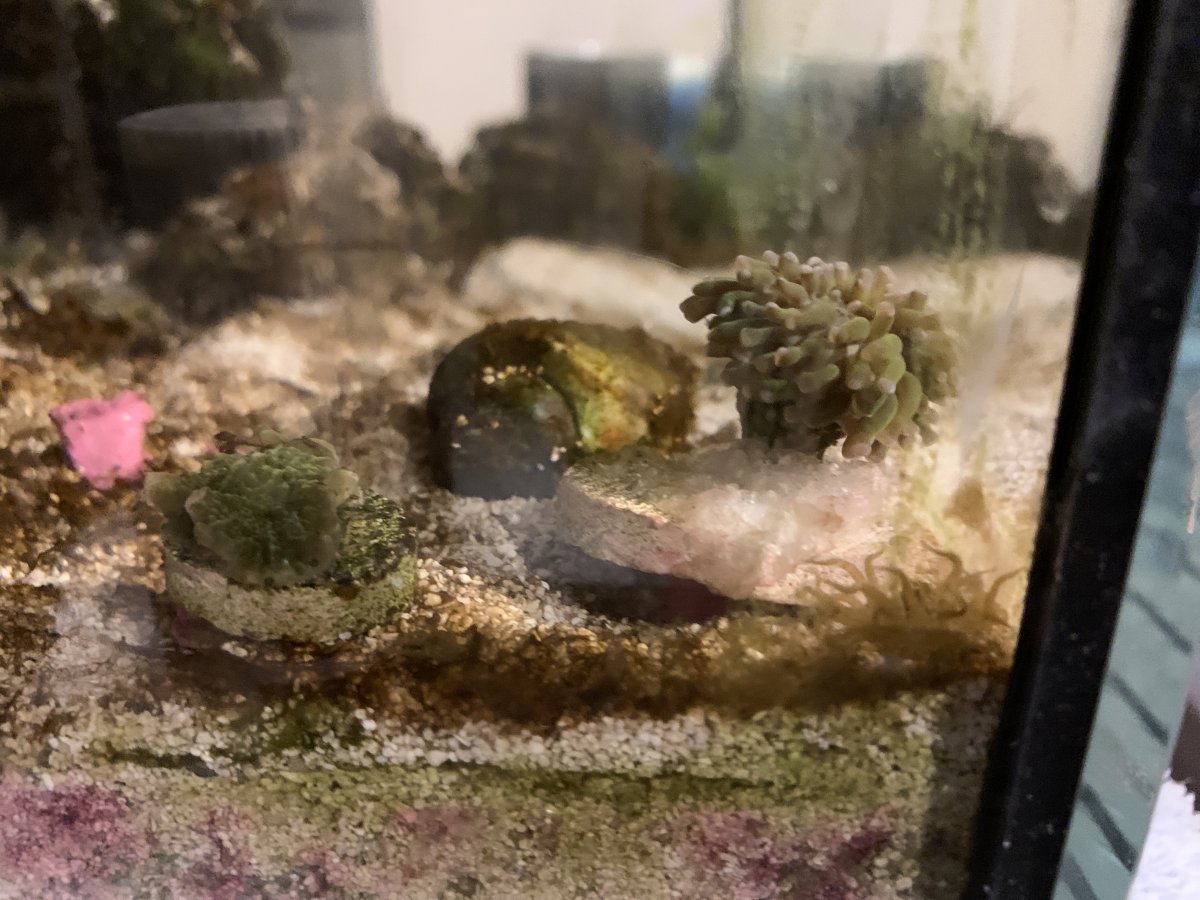 And now in their maybe final places (The hanmer may go up a bit more, it’ll stay on that side for sure, just may get a bit more lighting. 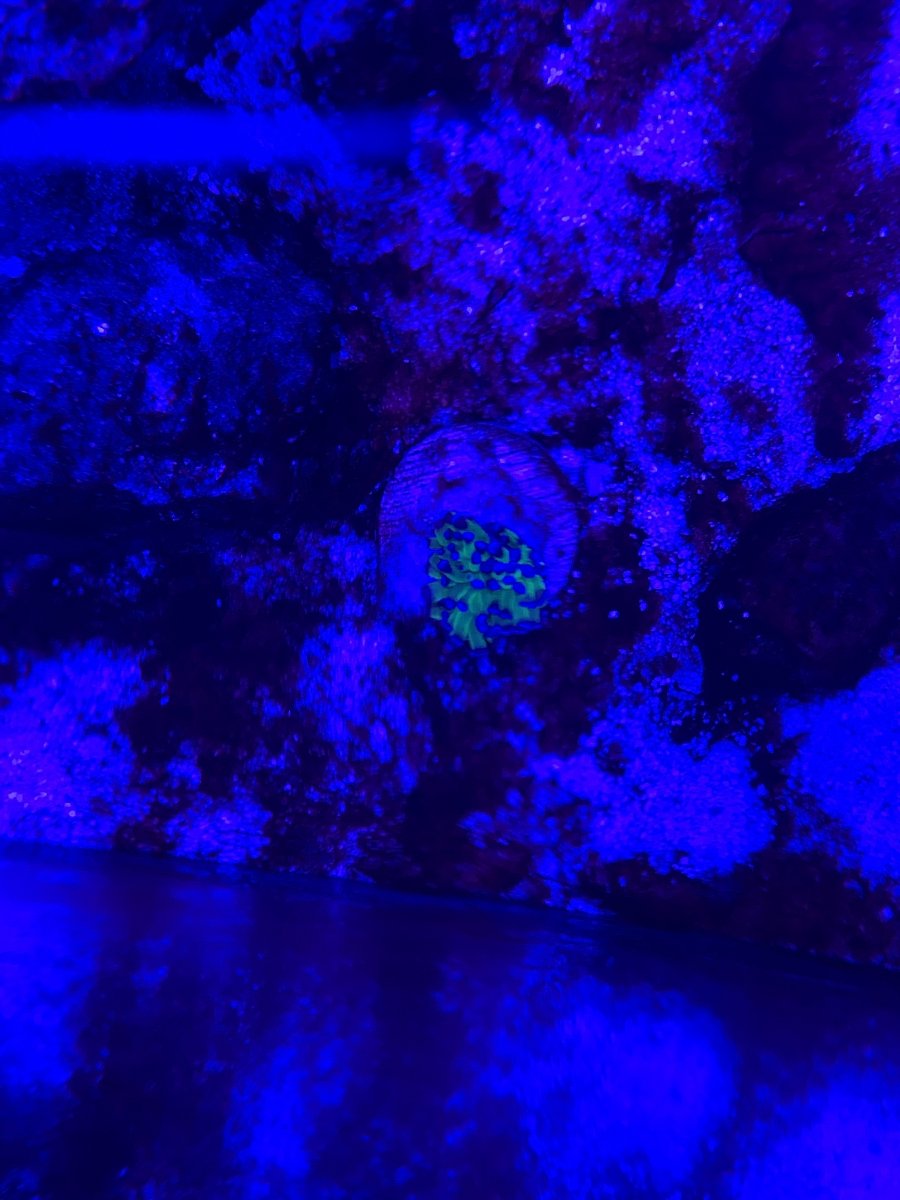 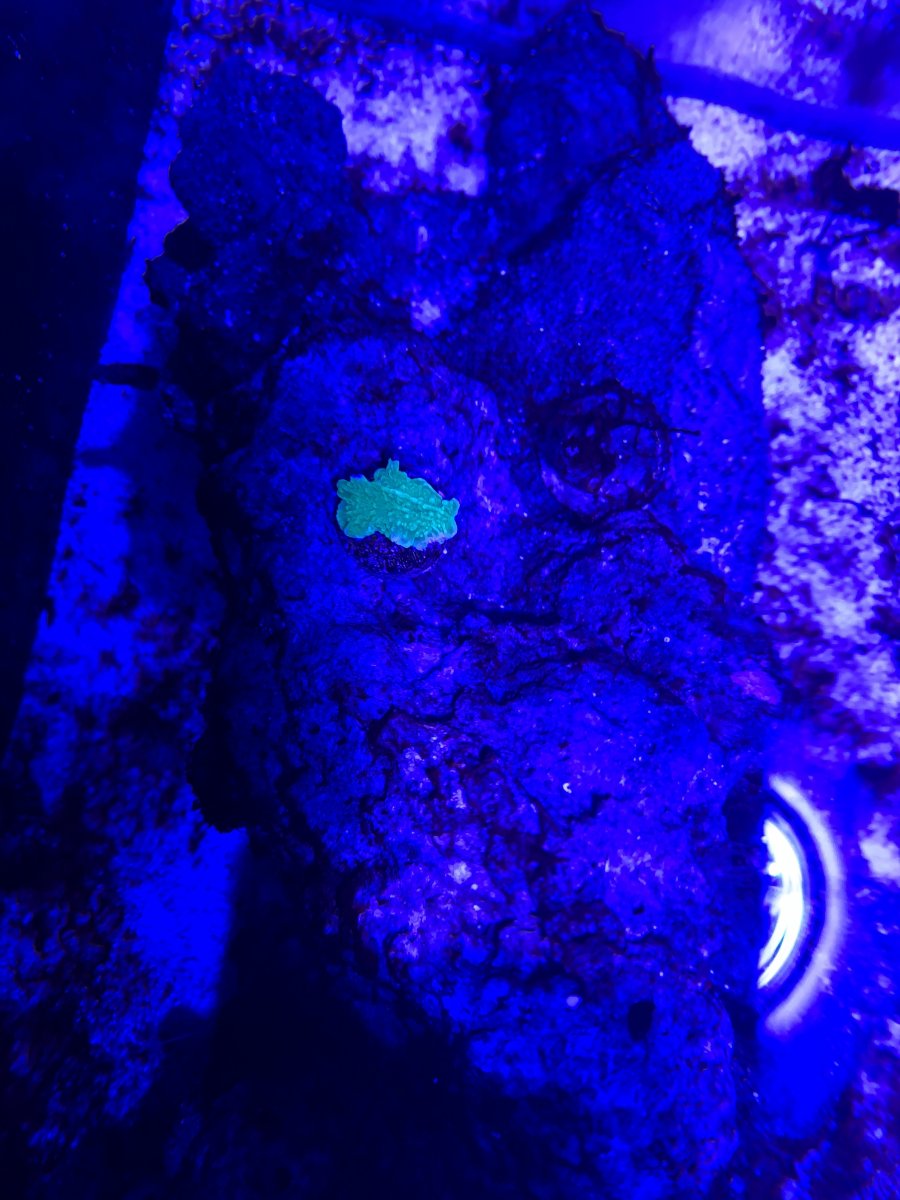 Rating - 0%
0   0   0
Also, while this isn’t quite a true pairing my Naoko fairy actually sleeps with my yasha and they use eachother for protection, when the naoko gets spooked he runs into the yasha’s cave and they both huddle together with the yasha on look out until the “danger” is gone. Managed to get a photo of this happening tonight, the wrasse is in his mucus cocoon and the goby is just next to him. I’ll get a morning photo of it and it really will show how the goby is more of the guard 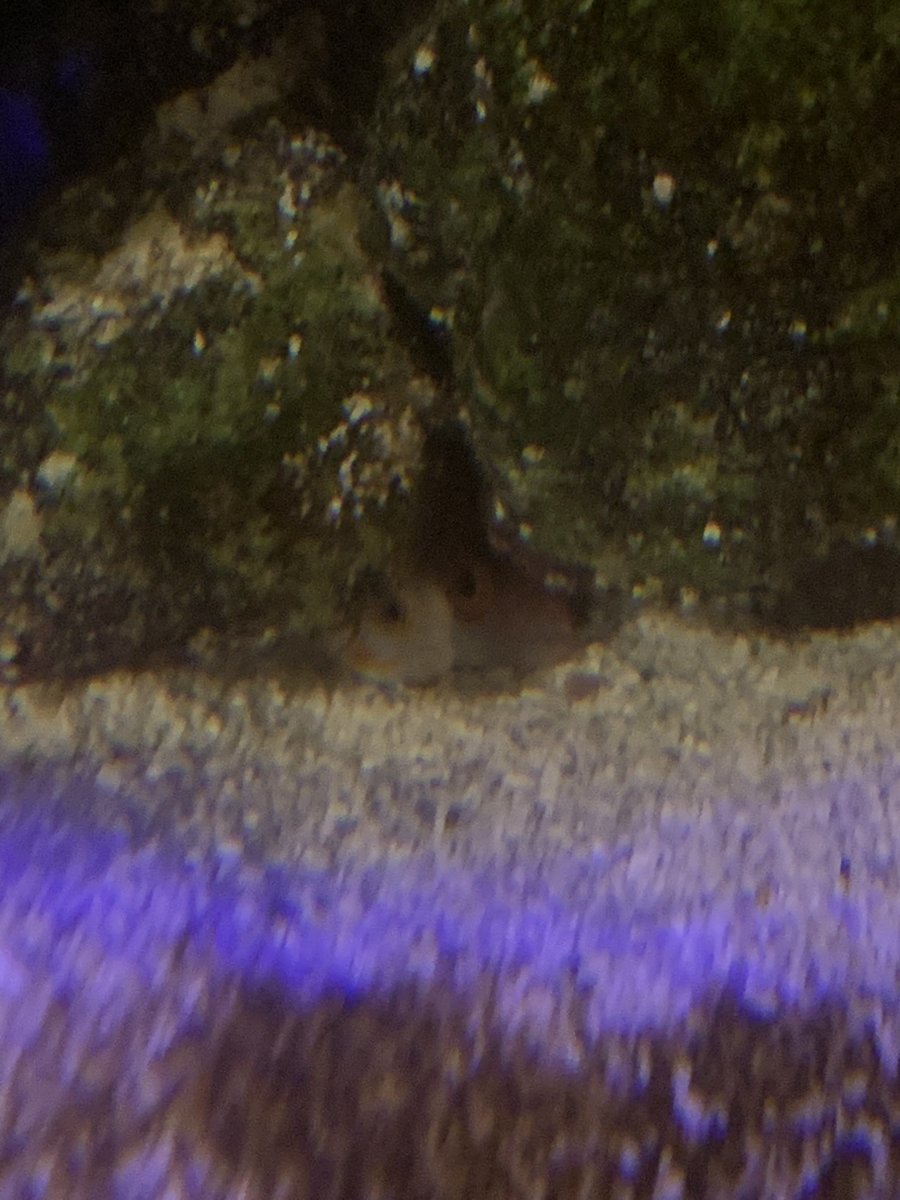 Rating - 0%
0   0   0
This may be the worst scape I have ever done - I had to remove the rocks to get detritus that was collecting and couldn’t remember what it looked like at the start. I ended up trying to mimic a natural reef (The rocks are mainly flat with a ton of caves). All the fish are doing great - None are stressed, unfortunately the yasha night hate me for ruining his cave 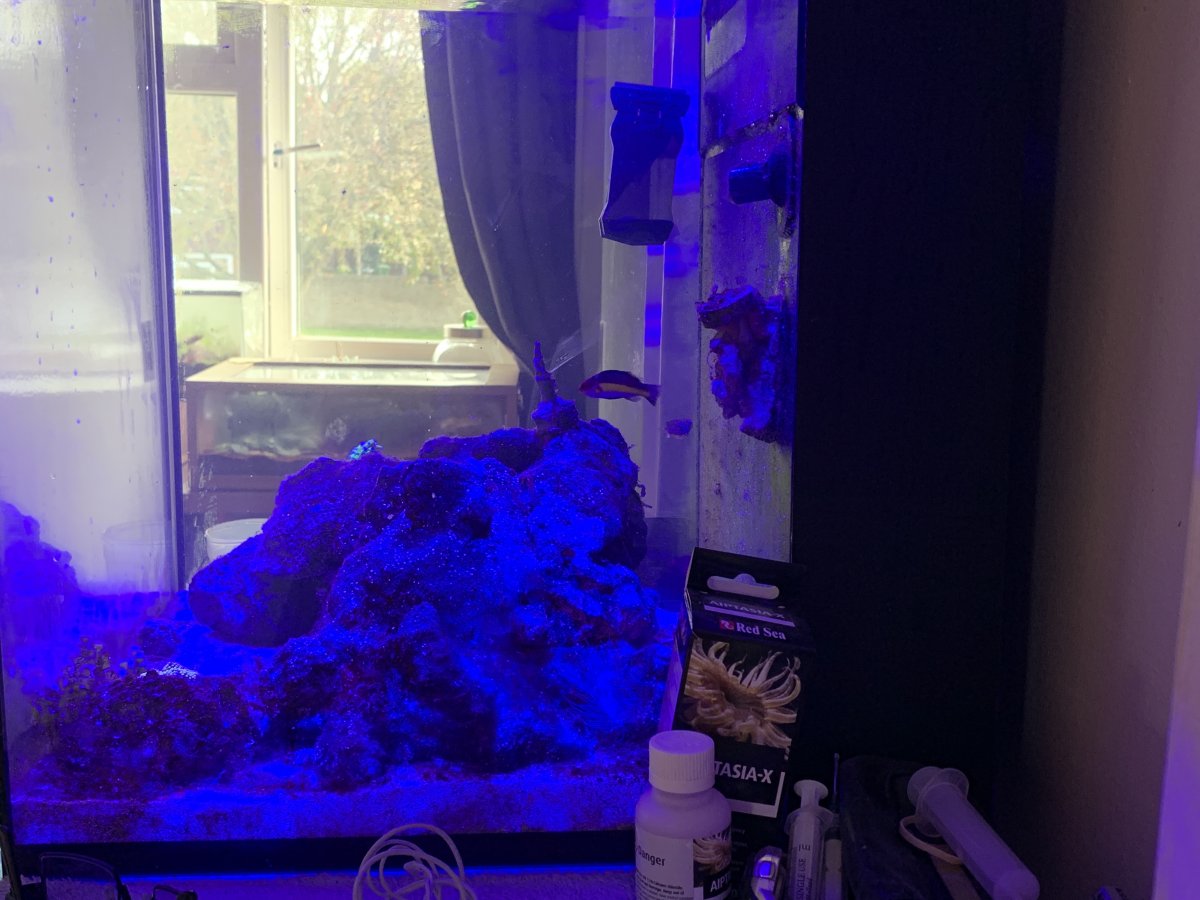 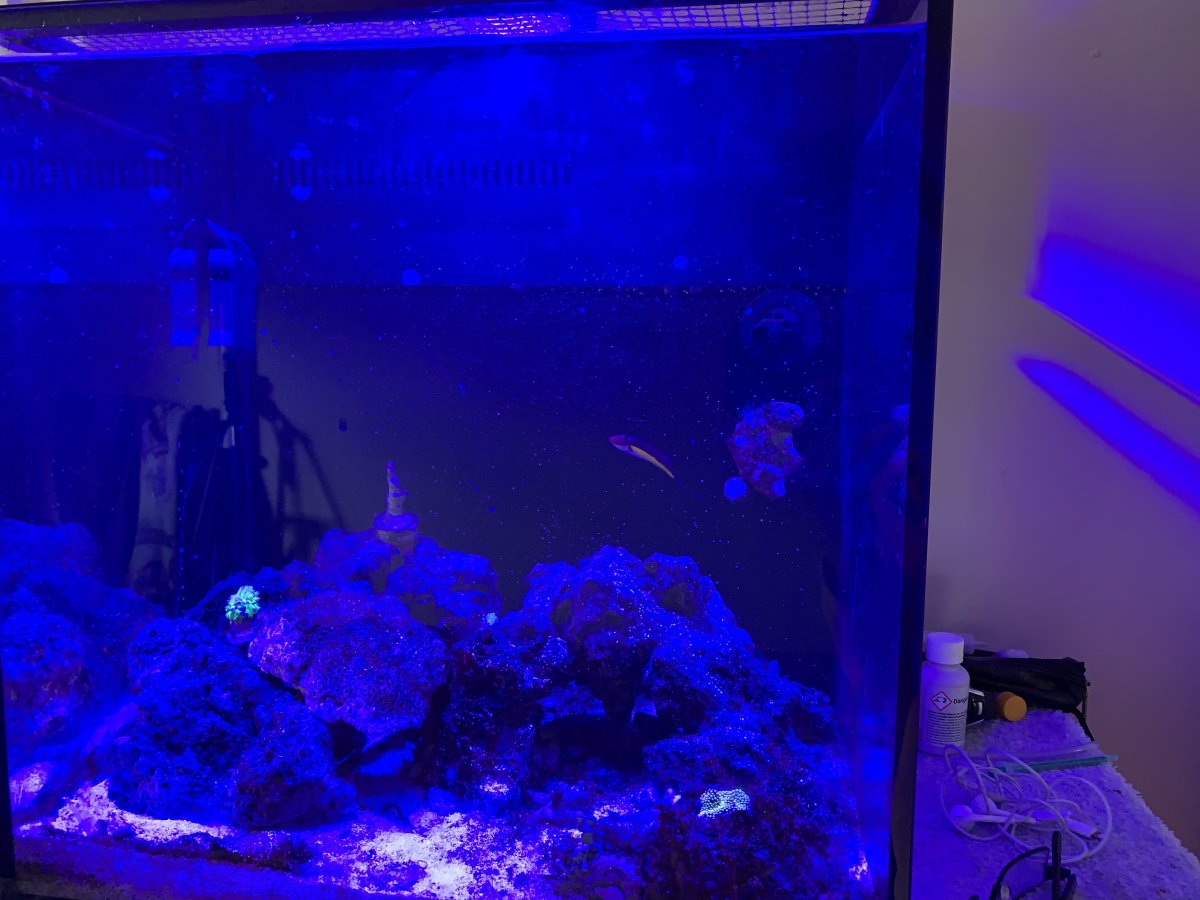 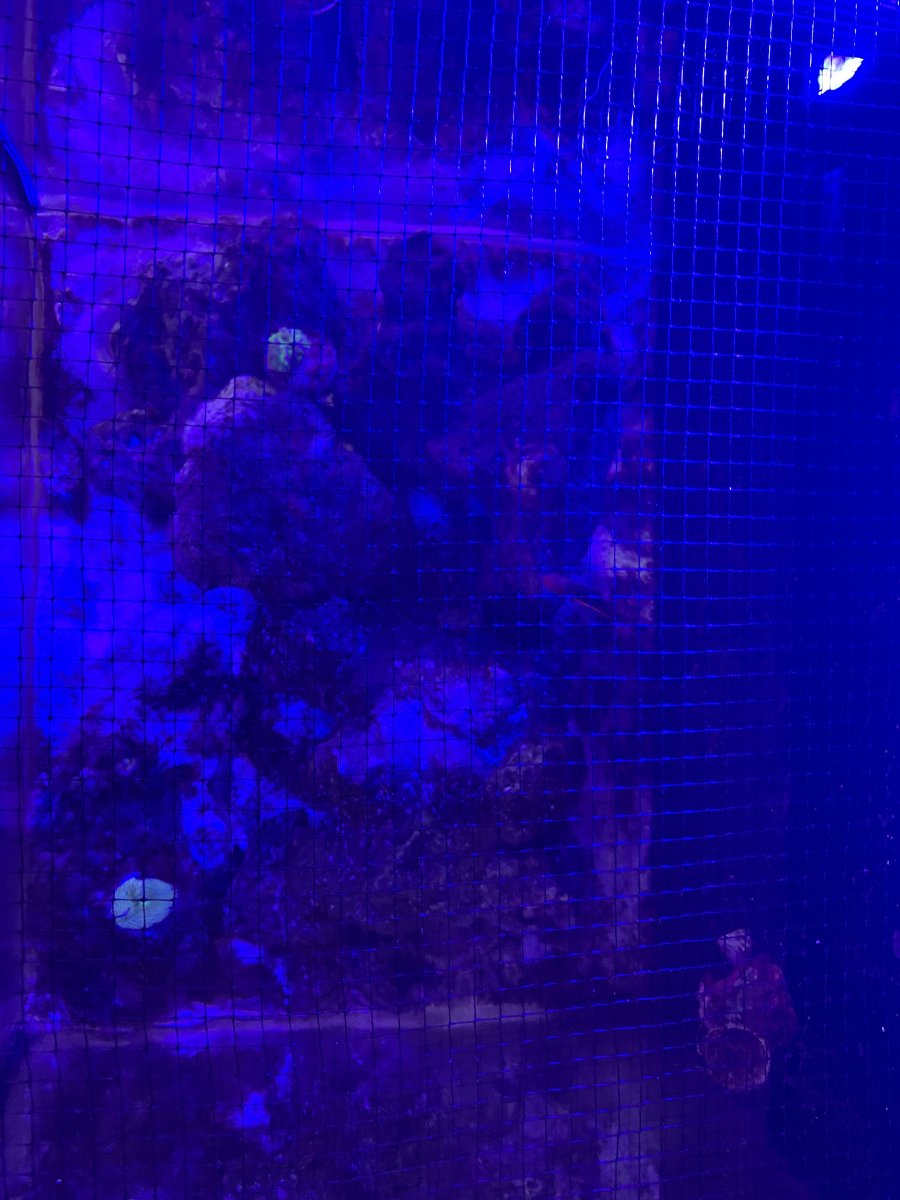