The not so exciting biocube 29 rescue

I have seen some pretty amazing build threads on the forums. Being a new reefer (started my first tank in early April 2018) I didn't figure I would bring anything interesting to the mix with my humble biocube.
I never really introduced myself either. My name is Ryan. I was born in Kansas nowhere near the ocean. My father is a scientist and works in agricultural research. In order to squeeze two growing seasons into a single year they plant winter nurseries in Hawaii. My freshman year of high school I spent winter break on the west side of Molokai. Anyone who has been to Molokai knows that there isn't a lot to do. Oxymoronically it is also named the friendly island... not so much for a skinny white teenager. So after work every day I was pretty much on my own. I became friends with the security guard (Bo Kikukawa always loved his last name) at the condo we stayed in. I have loved fishing as long as I remember and he was an avid fisherman. One Friday night he asked if I could get off work early on Saturday. Since I worked every day during the break my father gave me the day off. Early that morning his Bo picked me up and we drove to the harbor to go fishing. We loaded up in his fathers john boat and set out from the harbor. I had a near drowning when I was 7. I was walking backward on the dock fishing for crappie. They were repairing a section of dock and had it pulled. I didn't realize it and stepped right off the end. This was in December and it was snowing. I had a full snow suit on and boots. I remember it so clearly. I didn't even kick, just looked through the greenish water. Luckily my dad (who swims like a fish) asked me a question and when I didn't answer saw my fishing poled floating in the water. He dove in and managed to pull my to the surface. Now back to Molokai many years later. I still have a fear and respect of water and my knuckles where white as this little john boat jumped the waves. This was my first experience with a reef. We drove out to the drop edge of the reef where it dropped to deeper water and fished with hand lines for papio (Ulua under 10 lbs). We filled the bottom of the boat. That day was one of the greatest in my life, the next day not so much... It was the only time in my life I have been sunburned. From the edge of my shorts to my knees were on fire for the rest of the trip while working in the field. The following year I shipped my fishing pole in advance. After work I would go stand on the rocks and with a piece of squid catch the most beautiful reef fish. I continued these annual trips for many years. My parents were transferred to Kauai and I followed. I met a girl and moved to Maui and spent several years there. Fast forward to 2008. I was working multiple jobs to just scrape by. My parents were transferred to Illinois so I followed them and received a scholarship to Millikin University school of nursing. I planned to move to Seattle upon graduation, but during school I met the most amazing woman in the world and married her. We had our son at the end of my sophomore year. I don't recommend a newborn baby while working night shift in nursing school. In fact if you can get away with it I don't even recommend working through nursing school. That is how I ended up back in the land locked midwest, but this is a build thread right.... well lets get on with it.
Last edited: Sep 17, 2019

Outstanding story! Thanks for sharing. I feel like I know you already. Lived on Maui for 5 years 25 years ago. I can relate.
Yes, let's get on with it... Standing by!
OP

After graduation I started working in the local trauma center. I really wanted to start a reef tank but had always heard how expensive they were. My children have always been my number one priority so it was continually pushed off. One of the paramedics that came into the ER had 2 FOWLR tanks and convinced me they were not as expensive as I thought. At the end of March I found a sale on the biocube 32 led online and pulled the trigger. I have learned many lessons with that tank and minus the little algae bloom I have going now (I just bought reef roids and went a little heavy with it) things are looking great. This threat is not about that tank however. The paramedic I talked fish with rented a house. The land lady decided she wanted to sell the house and he received an eviction notice. He offered his biocube 29 for next to nothing. It has been neglected but I am a nurse and always feel the need to fix things. We drained enough water to load it into my truck and off I went. It is covered in gha and has some cyano. I got it home and the first thing I did was take his hood off and replace it with the led hood from my biocube. I had two extra Koralia nano power heads so I threw them in as well. The sand is nasty. The tank has been running for years and the smell is horrible. I way over bought Arag-Alive Hawaiian black when I started my tank so will be switching to that. I am going to take it slow removing a little at a time. The current sand is super fine so I plan on scooping it out with a cup and sifting the snails hidden inside. I know everyone likes pictures. The only camera I own is a 1979 Minolta XG1 and while it takes great pictures it is not the most practical or cost effective way to post for this forum so... You will have to deal with pictures from my busted up S6 cellphone. Painful I know...

P-Dub said:
Outstanding story! Thanks for sharing. I feel like I know you already. Lived on Maui for 5 years 25 years ago. I can relate.
Yes, let's get on with it... Standing by!
Click to expand...

I lived up country. So beautiful. Some day I plan on taking the wife and sharing it with her.

bsn_rn_cen said:
I lived up country. So beautiful. Some day I plan on taking the wife and sharing it with her.
Click to expand...

Lived in Makawao and Pukalani as well as Kehei, Ulupalukua, & Kaanapali. I got around while I lived there. It certainly was beautiful. Upcountry was my favorite but just too far from the water.
OP

I lived in Pulakani as well. Great little town.
OP

So hear it is my rehab biocube 29 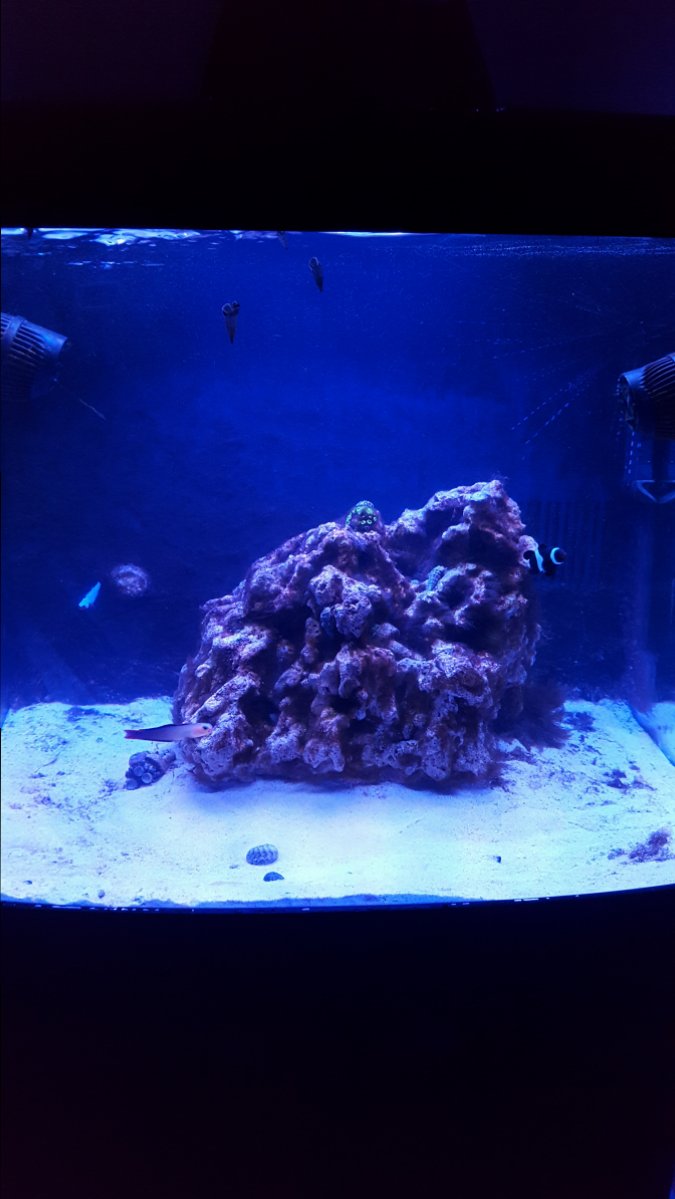 I will keep you updated as I clean and whip this tank in to shape. It is pretty stock. I made dyi media rack and am running BRS 0.8 carbon above purigen. I have considered buying a protein skimmer for it but haven't seen any real benefit with the stock one provided with my biocube 32. My biocube 32 has been upgraded to radion xr15 g4 pro and I love it. Today while cruising the forums I came across the 15% code for Drs Foster and Smiths site and bought one for this project. My main tank is packed full of lps and softies. I want this tank to be different (and well I impulse bought during last weekends live sale) so I am going to dedicate it to anemone.
Last edited: Jan 10, 2019

bsn_rn_cen said:
So hear it is my rehab biocube 29

What do you mean not so exciting? You have a great start!!! It's very exciting!
OP

Katrina71 said:
What do you mean not so exciting? You have a great start!!! It's very exciting!
Click to expand...

Thanks. I hope it turns into something exciting to look at.

bsn_rn_cen said:
Thanks. I hope it turns into something exciting to look at.
Click to expand...

Well it's a Biocube! How can it not? Is yours Oceanic or Coralife?
OP

The 32 I bought is a Coralife. I don't know on the used one. I am not seeing it marked anywhere.

bsn_rn_cen said:
The 32 I bought is a Coralife. I don't know on the used one. I am not seeing it marked anywhere.
Click to expand...

Show me the hood please.
OP

Katrina71 said:
Show me the hood please.
Click to expand... 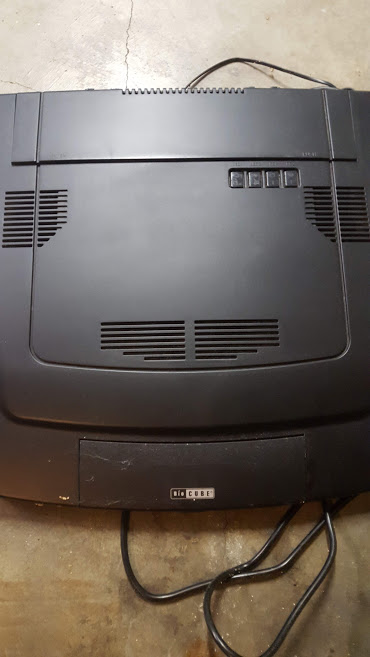 Btw, the 29 and 32 Coralife are interchangeable.

Does that one use compact fluorescent?
OP

Katrina71 said:
Does that one use compact fluorescent?
Click to expand...

Yeah it does. Since I have the xr15 on my other I put the led hood from the 32 on it until my new xr15 arrives next week.

Those cp will grow anything you want.

I'm really excited to see what you do with it!