Time for a Re-Boot

Nice job! i really hope you kept your asfur angel. I love the idea of large angels in reefs.

ndrwater said:
I totally sympathize. I kinda figured there's be some stink going on while waiting for reactor media to become media.. I may blast it with some muriatic acid and go from there.. we'll see.
I did just drop off a staghorn to a friend. I took one branch... Filled a 5 gallon bucket..
Click to expand...

Don't be like me and forget about it. I dumped some citric acid in my initial batch of and failed to set a timer. Couple days later it was mush. Even my frag disks disintegrated.
OP

Lights just coming on... Everything seems to be good.. figured now would be a good time to document a few of the corals I kept 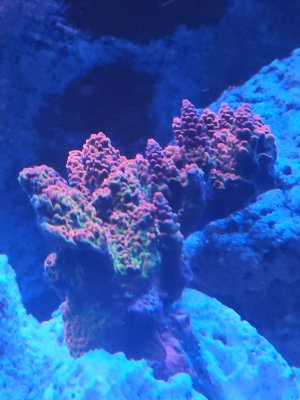 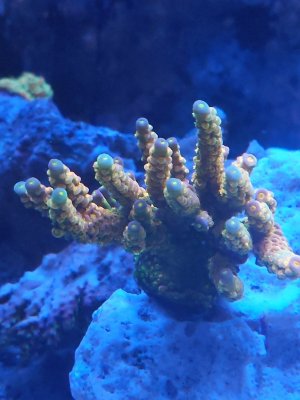 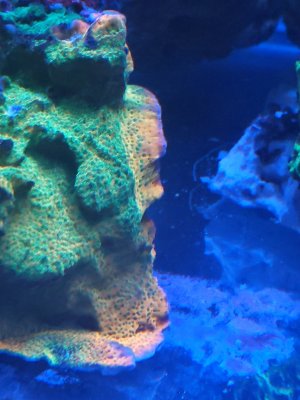 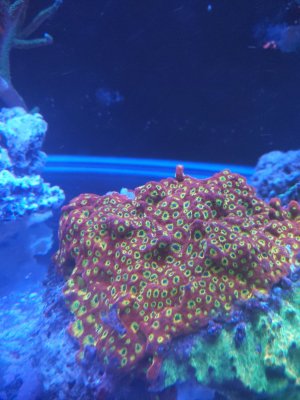 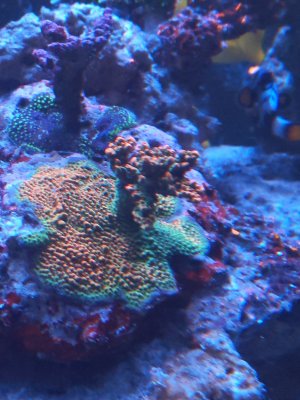 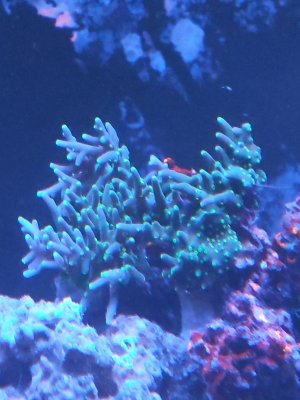 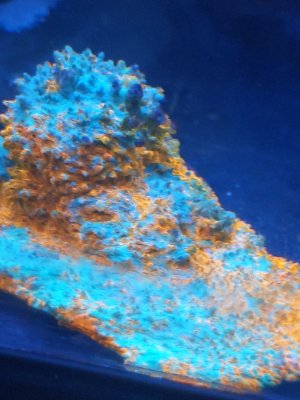 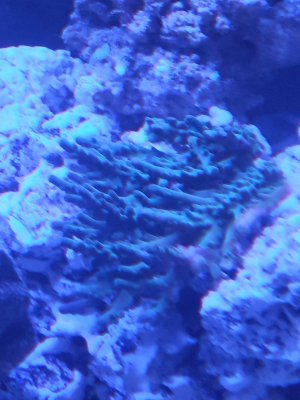 And yes @Firthy13 the Asfur made the cut. As did 4 yellow tangs, Naso, pair of Flame Angels, Flame Hawk, my 5 year old Cooperband butterfly and my equally as old Lawnmower blenny.
I would also be remiss if I didn't also mention the 6 year old lime sized turbo snail... FTS of V2 coming in my next post
OP

Here we have it.. V2...
Still may swap out a coral or two. Obviously things need to grow..
Fish seem to be enjoying the extra swimming space.. 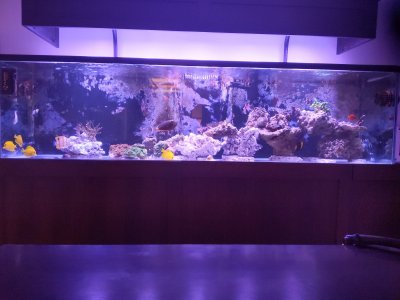 You have done a great job! You definitely know how to grow acros! What is your secret??? Following dor sure!
OP

Cristy17 said:
You have done a great job! You definitely know how to grow acros! What is your secret??? Following dor sure!
Click to expand...

Stability... It's really that simple. Well, that and flow.. lots of flow..
When I was dosing 2 part, I got up to 8 gallons a month.. that was.... Expensive as well as a total PIA as I only had gallon containers at the time. I went to a Geo Calcium Reactor and haven't looked back..
For flow, I run (2) MP60's at about 95% on Anti sync and (3) MP40's at a variable speed programmed via Ecosmart Live..
I can say, that once the tank was truly established, a used Acropower for a while and the corals went bonkers. I think there is something to be said about Aminos. I use it intermittently now with "Reef Snow" as a binder.
IMO using something like Acropower constantly is actually hurting more than helping. Just adds to much nutrients which is why I use it only so often..
OP

Okay... Wild hair time... The 120 is squarely in my cross hairs... And I thought today was going to be boring...
This is my LPS tank... More photos and description as I go.. But this is happening NOW!!!
OP

Blue tarp on the floor again.. gonna get wet . 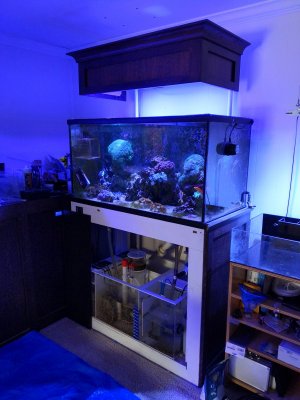 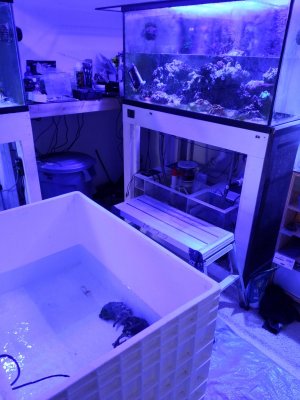 Been here before...
LPS this time though 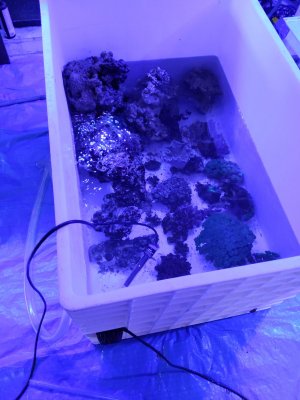 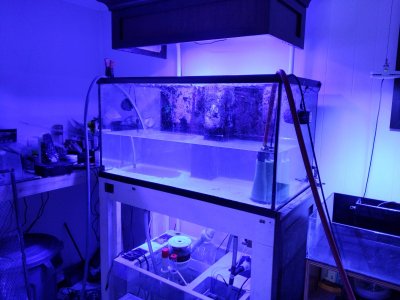 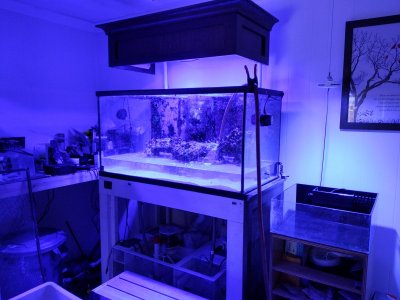 So....
Should probably give a little backstory on this one too.
The 120 is already on V2. It was a custom sized 60 gallon back in the day, but I also had a TERRIBLE Aptasia problem.. so when a LFS was having a blowout sale on tanks, I decided a 120 was better than a 60 and went for the upgrade. This time the chance to start fresh-ish with some live rock I had, but keep the corals and fish to give everything room to grow.
Fast forward a few years.. everything got BIG... Apparently I can grow LPS and fish too. The Blue tang I have in this tank I got when he/she was the size of a quarter. I didn't really how big it had gotten until today when I moved him/her to the 240. Which.... Is really the reason I got all crazy tearing things apart. The blue needed a bigger house and there was no way I was going to be able to catch him with all the corals in the 120. I had also rehomed a Purple tang when I did the 240 and wanted to move my other purple into the 240 figuring he too would be happier in twice the room.
So.. here's the really fun part. When tearing things apart, I decided the plop and drop method would be best for both the blue and purple. Worked a treat. The Blue didn't miss a beat and is now exploring the new 8' digs. The purple.... Apparently thinks he's a yellow tang. Purple has taken to schooling with the 4 Yellows already in the 240. No squabbling, no issues. Just apparently two very happy fish. They both are literally 5 minutes into the new tank.
I have a few other fish that stayed in the 120. A CBB, a Pintail wrasse, Lawnmower blenny and a yellow watchman.. they will probably get some new tank mates at some point in the not to distant future. And the corals... Some will stay, some won't. I have a green and purple Frammer I have had for about 6 years that started as 2 heads and is now 3 separate colonies with over 300 heads on the biggest and about 150+ on the other two. Plan is to keep the big one for now. The other 2 I plan on horse trading with a couple local coral sellers. These deals have tentatively already been made so we should be getting some new corals sooner than later.
I also just happened to get a baby gold torch today. At $25 I couldn't pass it up. The benefits of being in SoCal I guess.. corals are cheaper here... We'll see how that one grows.
Also need a shout out to my wife for all her help today. Couldn't have done it without her.
So.. now I'm sore, tired and glad I got this done.. updates will come shortly..
If you got this far reading my extremely long winded diatribe, .... Thanks..

I feel your pain bro. I have had my tank for 11 years. A few years ago my system crashed and I lost everything. That was a blessing in disguise. My colonies were stupid huge! I now buy the smallest cheapest high end frags I can find as I know a decade from now they will be overgrown in my tank. Being high end, I might be able to get some money back with them.

Great thread! The one thing I’m determined not to do is to buy coral just to buy coral, I want my tank with corals that I personally like not based on name/price/supplier. I have a 120 that’s 3 months in and as someone who wants to grow sps I have a question. What are you using for flow on the 120? I sometimes fear I don’t have enough
OP

arichmond1003 said:
. What are you using for flow on the 120? I sometimes fear I don’t have enough
Click to expand...

Thanks for the compliment!!
So.. for flow in my 120, which is a LPS tank, I have (2) MP40's on opposite sides. There is also the return pump split into two returns on the top back left and right. Seems to work well for the LPS.
Now in my SPS 240, I have (2) MP60's and (3) MP40's running various programs at about 90% PLUS I run an Abyzz A200 for the return. There is a TON of flow in my SPS tank. I am pretty close to 100x turnover within the tank. The flow through the sump is obviously much less. In my opinion, it almost can't have to much flow in an SPS tank..
A

Cool cool. I’ve currently got two icecap 3ks on opposite sides with a split return on the back both left and right.
M

Ben, the 240G looks amazing. Sometimes a reboot is exactly what we need. Can't wait to see what the 120G looks like.
S

I admire your conviction on this reboot. It is very impressive. I am still baby-stepping my reboot and it is annoying me to look at the 1/3rd or half done job. Afraid to go faster as each change destabilizes the system for a bit with nutrients and uptake bouncing around.

On the bright side, I don't have to worry about the shortage of ReBorn reactor media for quite a while. So I got that going for me.