Starting over stinks but it's a good upgrade opportunity.

At about the 8 year mark of this tank running I got a really bad case of dinoflagellates. I thought how can this be? My nitrates and phosphates were zero?! It seemed like the more Phosban I ran the worse it got. It got so bad you couldn't see the rock or the sand. I would almost daily net out as much of the gooey snot as I could, suck out the rest and by the next day it would be back even worse. Got so bad it literally almost filled the entire tank! After it killed all my fish and corals I just left the tank to evaporate out of disgust. It sat there like that for 4 years. We now understand that keeping nitrates and phosphates at or near zero is not a good thing. Great if you're curious about dinoflagellates but I would suggest you don't want to find out.

I finally got the urge (and a nudge here & there from wifey) to get it back up and running. Most of my equipment was newer so I plan on cleaning and re-using most everything and replacing/upgrading what didn't make it or is now defunct. I'm surprised at how much stuff I had stuffed away in the closet. Lots of citric acid, bleach and elbow grease later I'm on the path again.

My tank is a 90 gallon with a 20 gallon short sump controlled by a Reefkeeper Lite, for now. I'm sad to find out DA went out of business. At least it was cheap! Time to start saving for an Apex.

Pictures and equipment list coming up. My phone camera is terrible (cracked lens) so I have to wait for wifey to come home so I can use hers.

It's been a while but I've been busy busy gathering up equipment and a little DIY. I got the tank and everything I'm going to re-use cleaned and in place. The tank and sump are plumbed, leveled and nearing the wet test. Still working on aqua-scape in between.

- Marine Land (?) Max-flow 90 gallon 48"L x 18"W x 24"D.
- 20 gallon long sump with DIY dividers.
- Going to start with a smaller PM Redline 100 skimmer for now and will bump up to an Octox-200 xs later when bioload calls for it. Also considering running the air intake outside.
- Mag Drive 9.5 return pump.
- 2x Next Reef carbon reactors. One for carbon and one spare for whatever later on. Plumbed into the return line with a gate valve and shutoffs.
- Reef Keeper Light controller (for now). Not much for it to do right now though. It will be responsible for ATO, a 2nd temp probe to turn off the heater in case of over or under temp and sound an alarm. Will also turn on & off fans and give a "feed mode" for skimmer.
- * Finnex HC-810M heater controller and 500w titanium heater in sump.
- * 2x Nero 5 power heads, with possibly an assortment of older gen3 Korillia 1150's or nano 400's as needed.
- * 2x Radion XR30 gen5 pros, spaced per BRS recommendations (13" - 22" - 13", 8" above water level) and mounted into the existing hood. I mounted 120mm fans on each end to exhaust the heat and improve air flow through the hood. More on this in the next post.

Lastly I ordered new filters, flow restrictor & membrane and an auto shutoff kit for my old Aquatic Life RoDi system then mounted it under the laundry room sink. It's now connected directly to the water supply with a John Guest adapter with shutoff valve and the waste water runs down and outside. We have a septic system and I don't want to fill it up with RoDi waste. All I need to do now is roll out the water line & turn on the valve. No more lugging buckets!

I'll be using Instant Ocean salt. I had bought a new bucket just before I tore it down so thankfully I didn't have to buy salt.

That's it for now. I'll post some pictures and info on how I modified the included mounting hardware and mounted the XR30's in the hood...
OP

Been a while again. Been really busy getting everything just how I want it. I got tired of taking crappy pics when I know my phone does pretty well but for the cracked glass so I tore it off. Now takes good pics again. As promised I have some pics and will show how I mounted the XR30's in my hood.

First an FTS of the glass box. Also the beginnings of the aquascape. You can see the Reef Keeper installed lower left of the tank. More on that later. 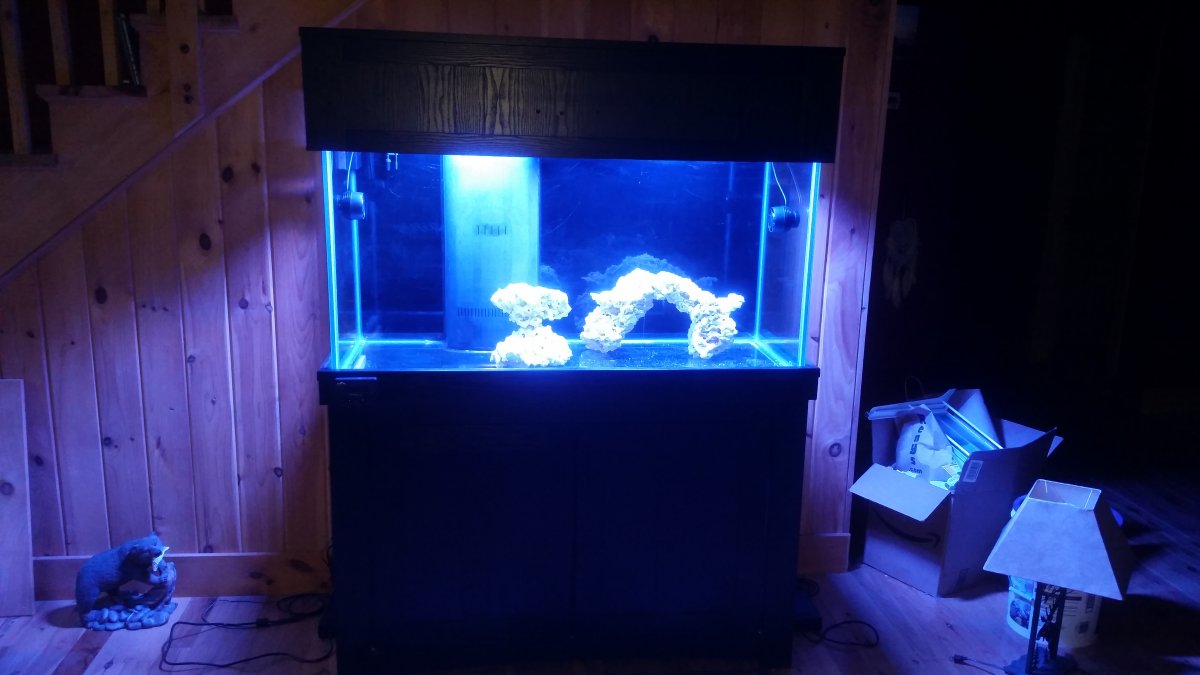 You can see there's not much room in the hood. I'm shooting to put the lights 8" above the water in about 9" of space! They're already in place in this pic but it's the only good one with the hood on.

A shot inside with the hood open with the lights and fans installed. Not much room! By the way, the fans are inaudible running at 6v but they're 120mm fans and they still move quite a bit of air. 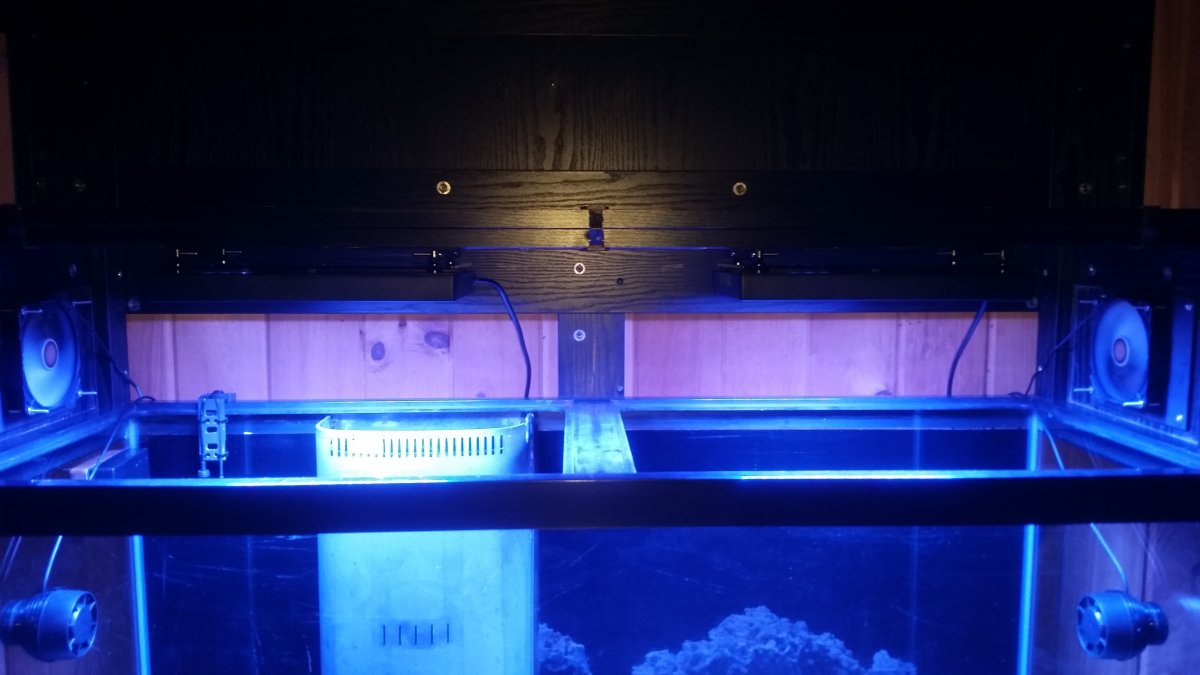 A look at the internals where the business happens. 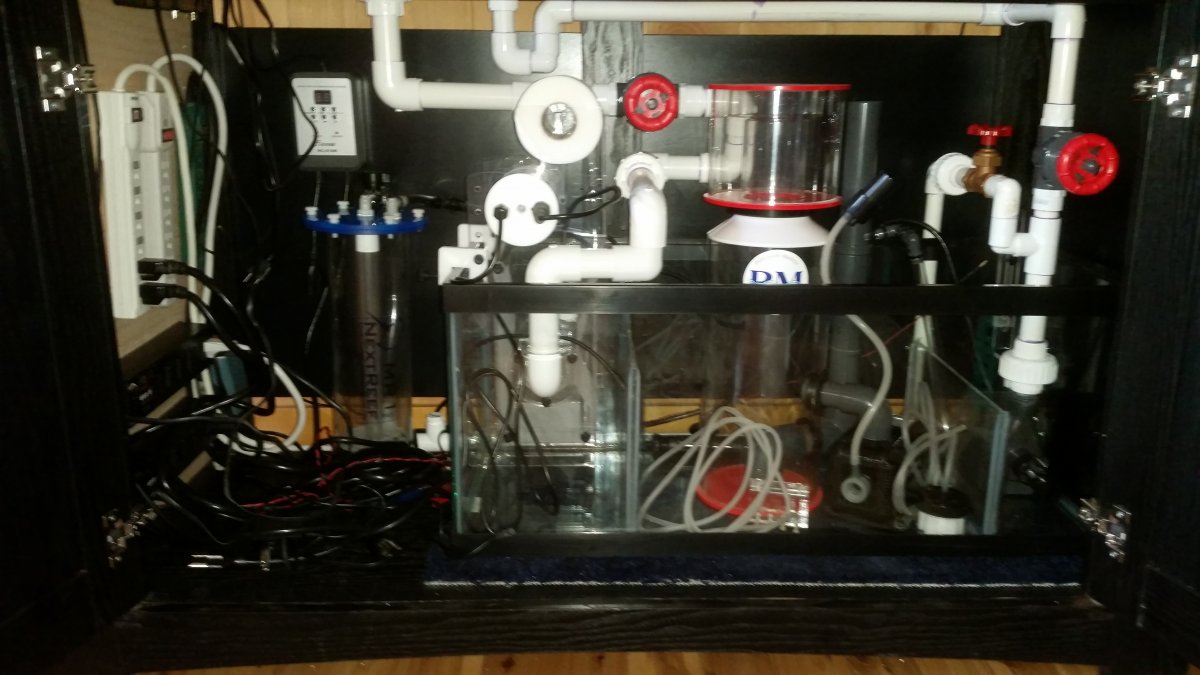 Going to run my small skimmer for now and will up it to this guy when it can't keep up. 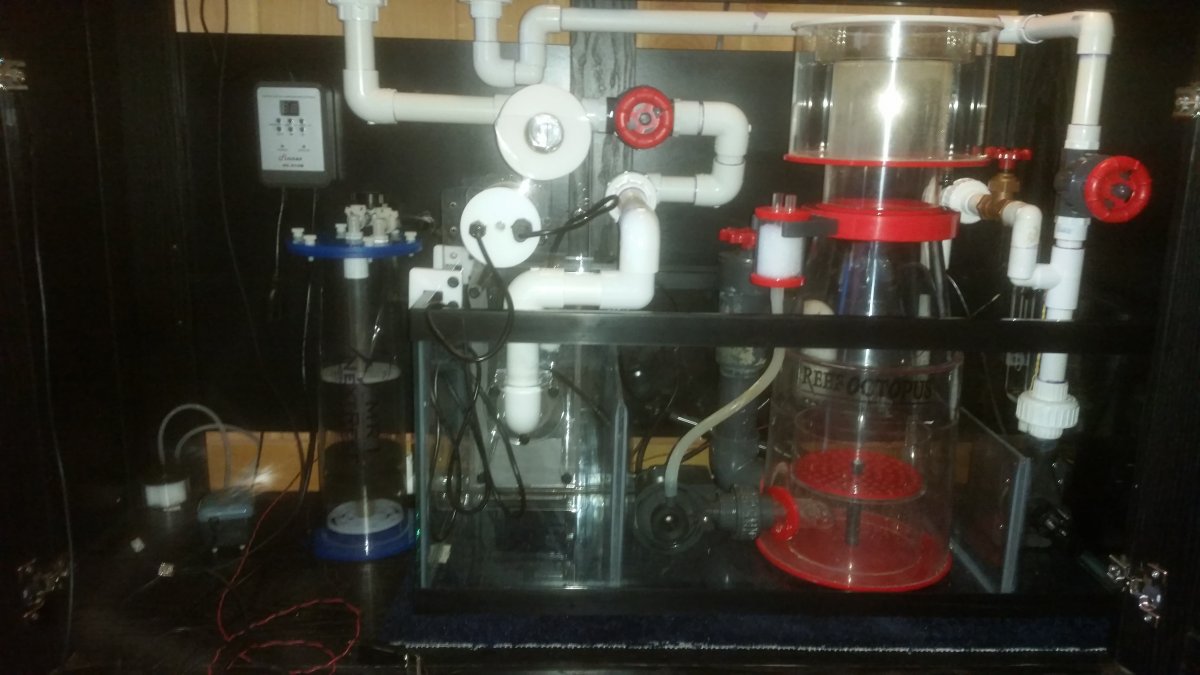 On to the light install...

Following! I have the same tank, didn’t know the brand since I bought it used. Glad to know it’s a marine land.

After a LOT of pondering as to how I was going mount the XR30 Pro Gen 5's as close to the top of the hood as possible I had an apifiny while I was laying in bed. I used the little screw in mounts that came with the lights and some 3/8" x 1/2" aluminum angle iron that held my old DIY LEDs together.

I had a bunch of 80 mm fans in there previously so I left the hole in the top and opened up the side holes for the big fans. Then I hot melt glued some nylon screen to cover the holes to keep anything from falling in accidentally. I cut some 4" holes above the lights so their fans could draw in fresh air and covered them with screen also. 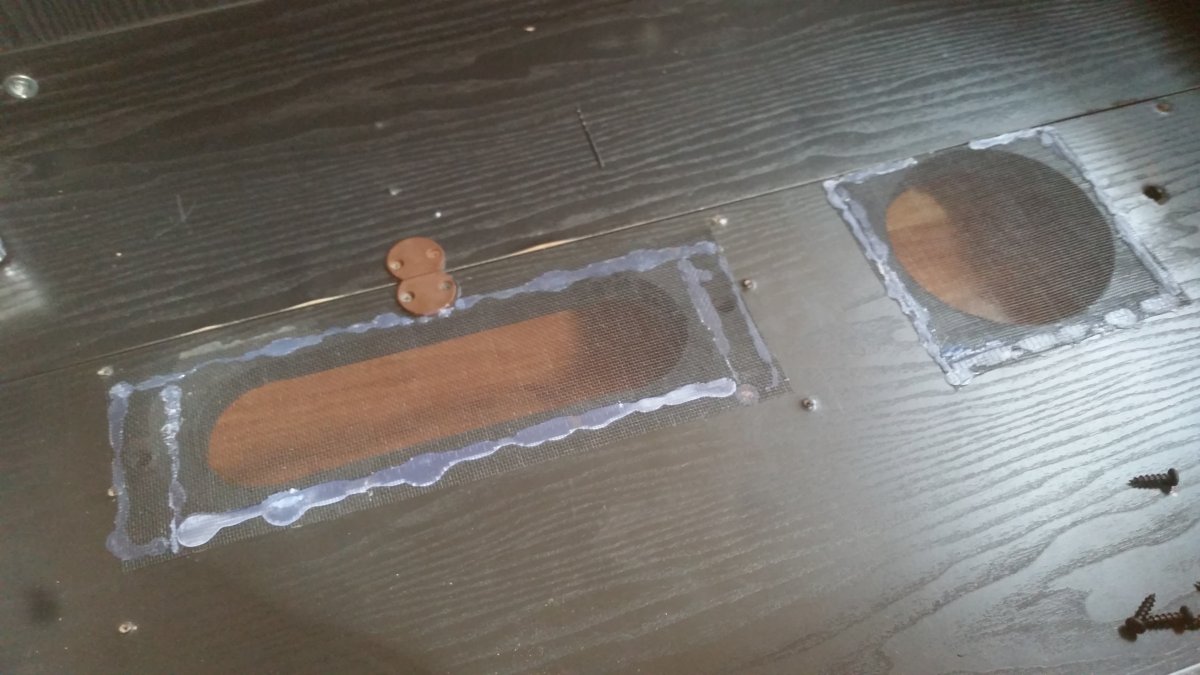 I found the holes in the Radion mounts were just about exactly the same size as an 8-32 screw hole. Sweet! Threaded the holes to accept the screws directly, drilled the brackets as close to the angle as possible and mounted them to the hood. 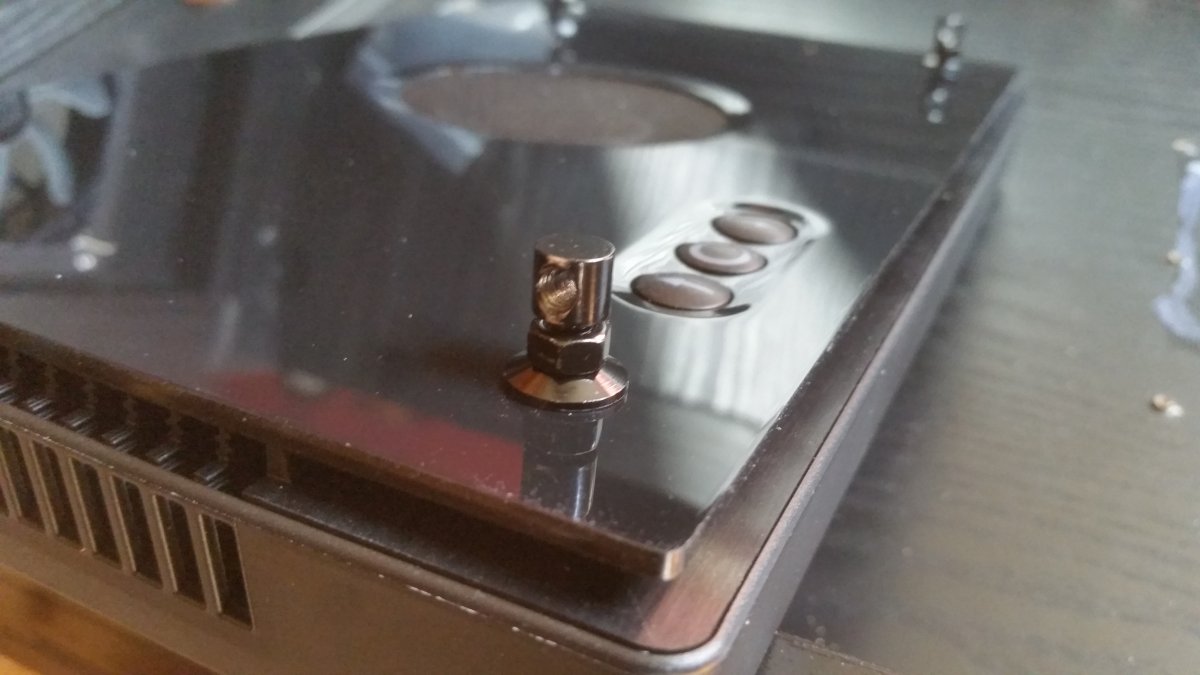 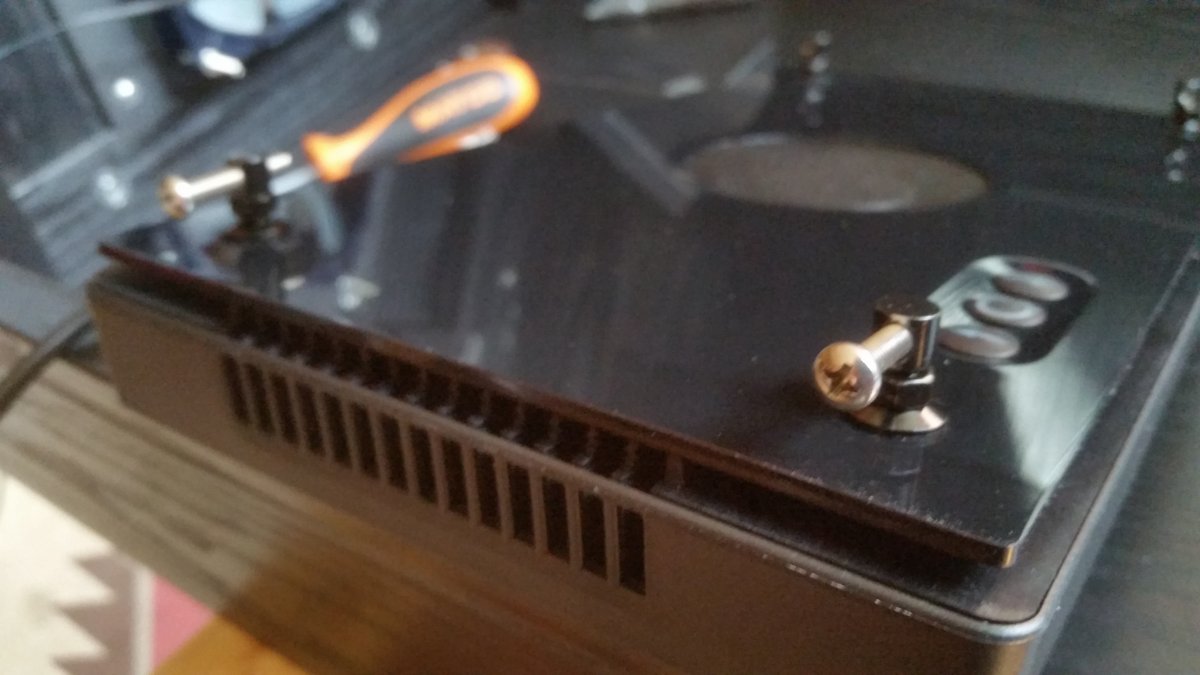 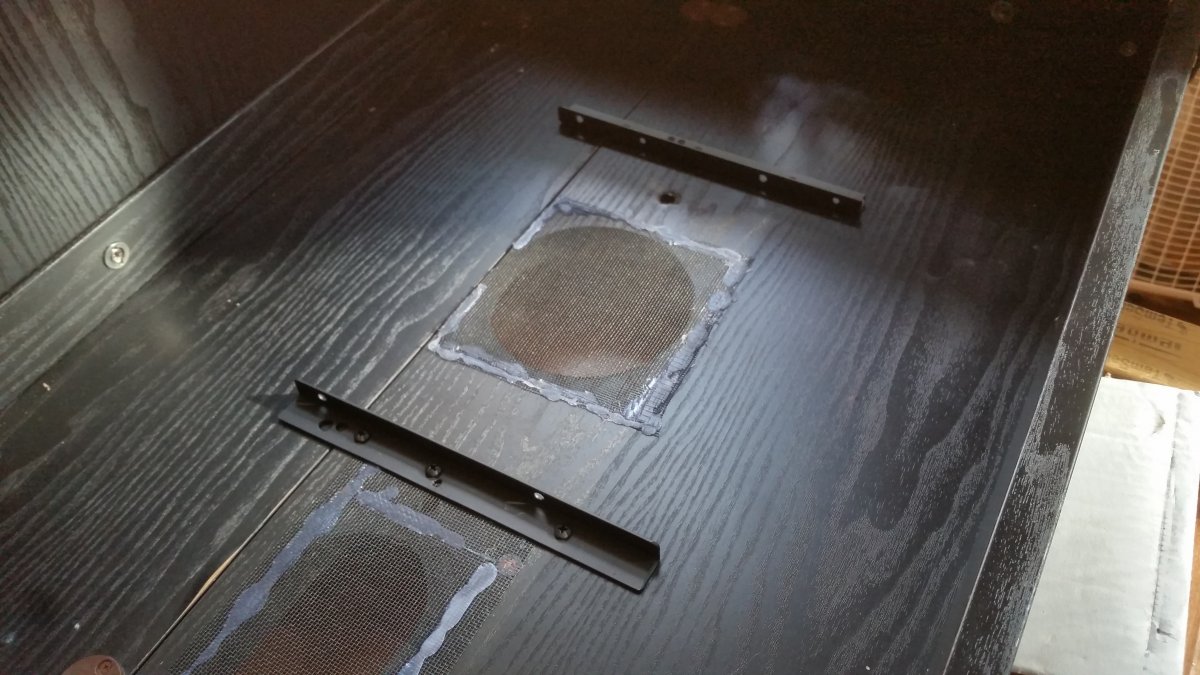 The lights are mounted 13" from the side and 1/2" forward of center. Perfect fit! 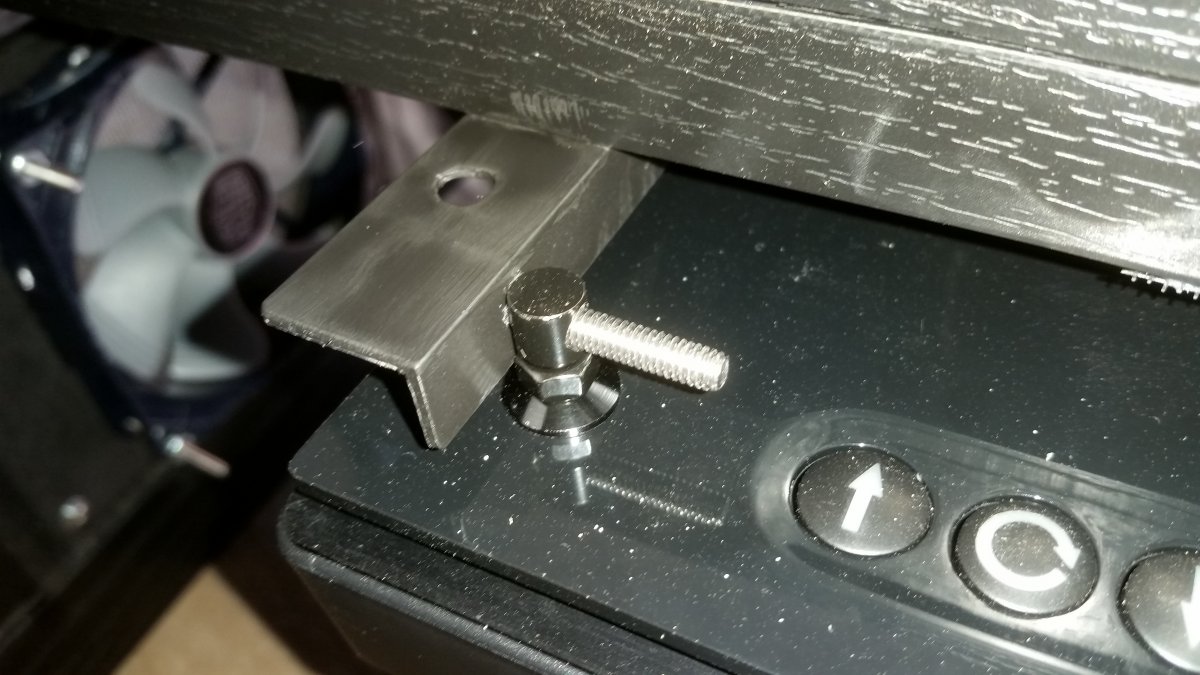 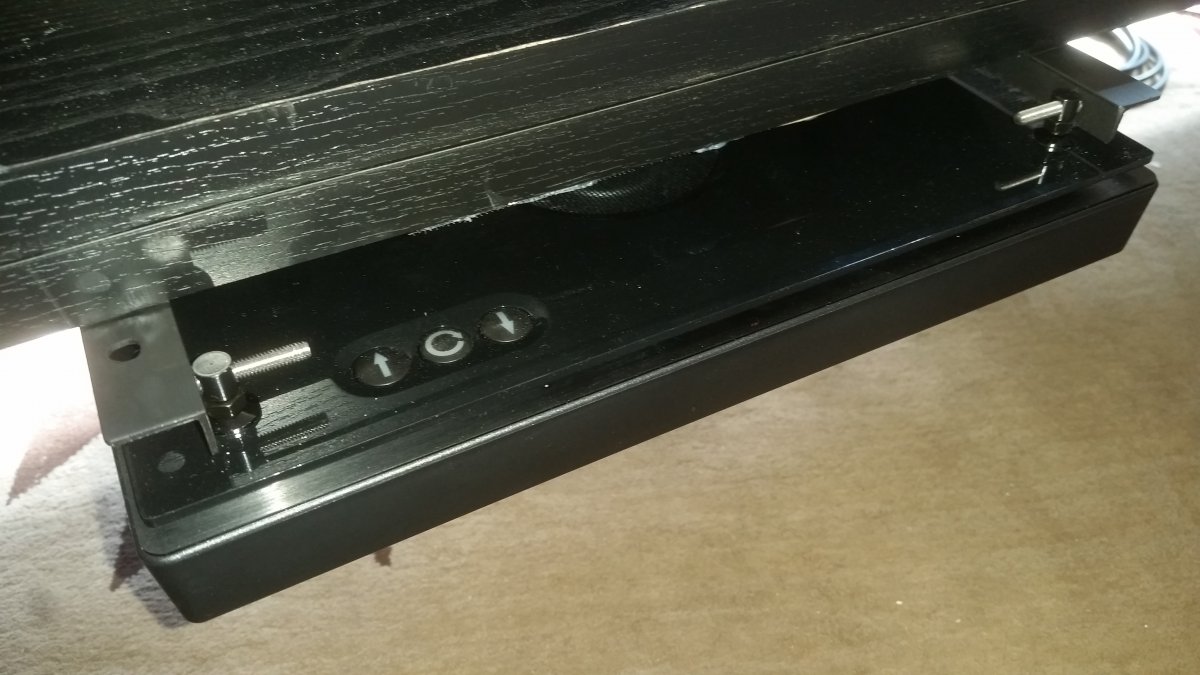 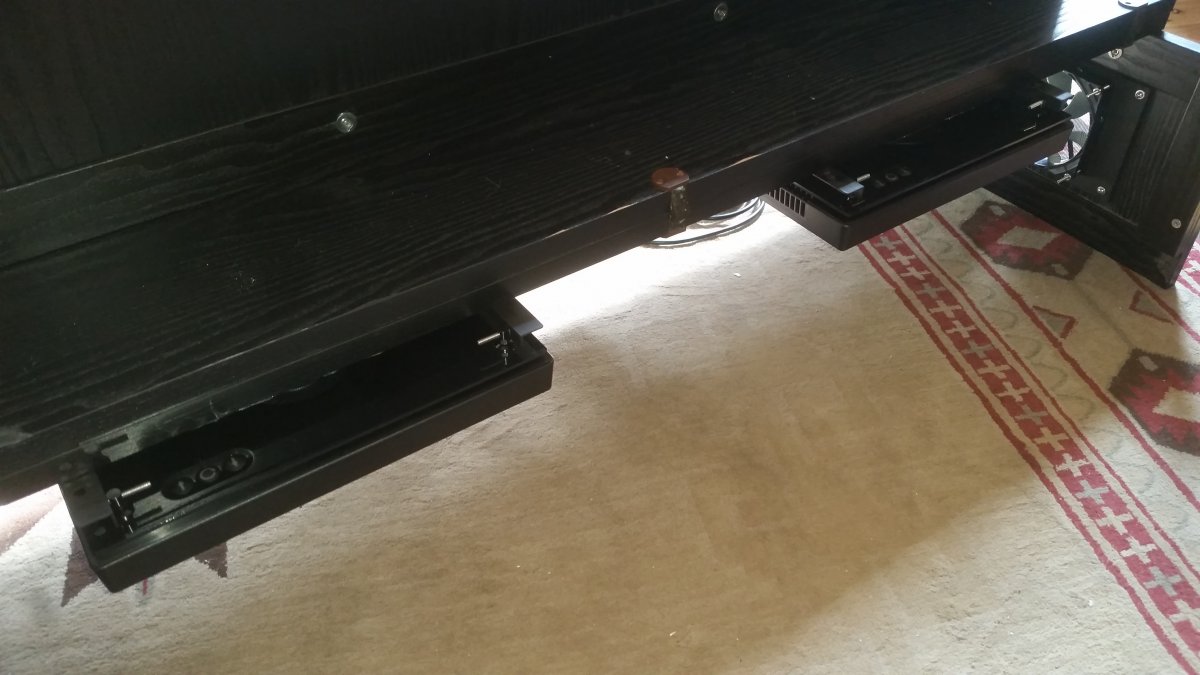 Lastly a quick shot of the side fan mounting. 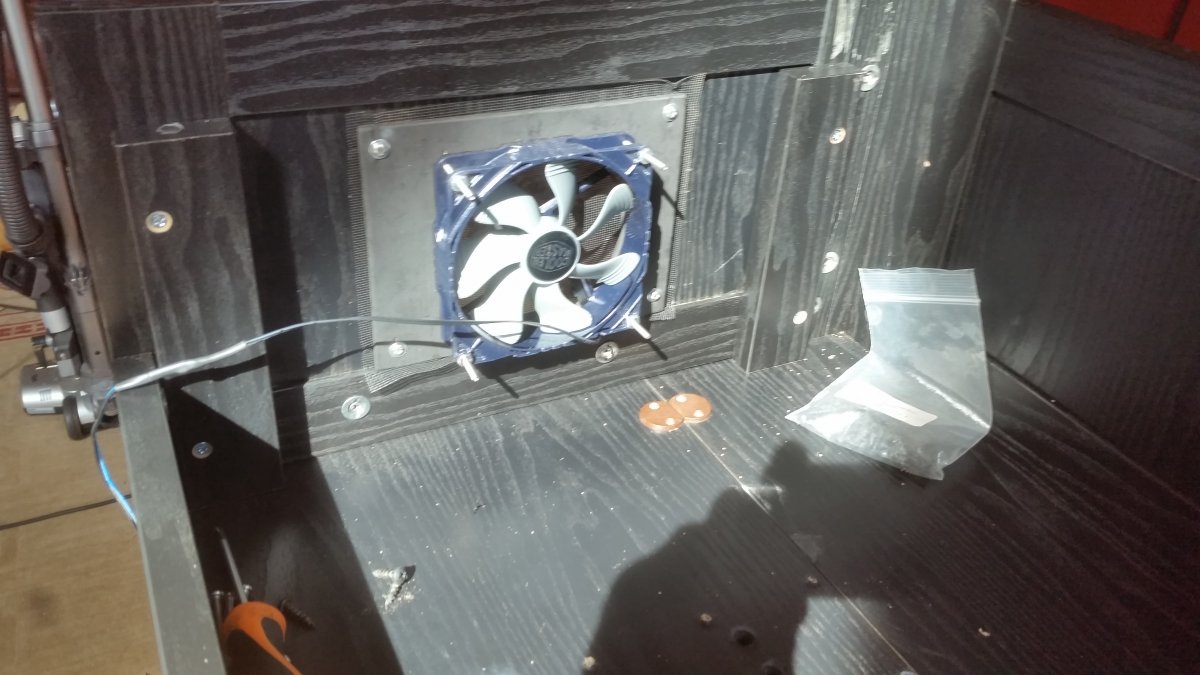 TriggerFinger said:
Following! I have the same tank, didn’t know the brand since I bought it used. Glad to know it’s a marine land.
Click to expand...

My fiance' bought me the tank and stand from the LFS for my birthday the year we moved in once the new house was finished (2008). The tags are all removed now so I had to look back in my reefcentral sig to see what it was. lol It's a Marineland Max Flow 90 gal with Stafire (?) glass. It's super clear. I hate the one big overflow. Would have preferred two corner ones or even better a floating overflow but it's hard to complain. She's too good to me, bless her soul.

takitaj said:
My fiance' bought me the tank and stand from the LFS for my birthday the year we moved in once the new house was finished (2008). The tags are all removed now so I had to look back in my reefcentral sig to see what it was. lol It's a Marineland Max Flow 90 gal with Stafire (?) glass. It's super clear. I hate the one big overflow. Would have preferred two corner ones or even better a floating overflow but it's hard to complain. She's too good to me, bless her soul.

The big overflow is annoying, not sure how they came up with that spot to put it. A corner seems logical to me. Your fiancé is a keeper!
Nice job on the canopy and lights!
OP

On to the aquascape. This is what I'm going with. 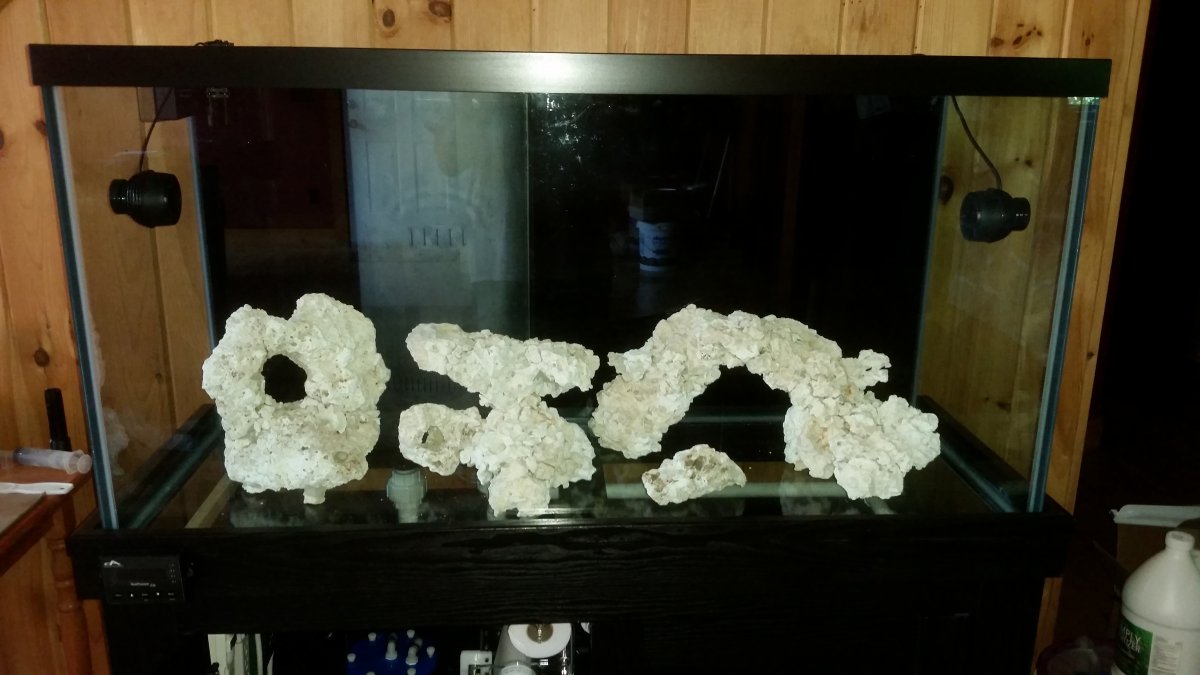 I have a LOT of rock from over the years, maybe 200 lbs. Some old live rock, that's long dead now, and some Reef Saver rock. I set it all into 2 20 gallon totes, threw a gallon of bleach into each and let it soak for 7 days, covered, in the hot 95 degree sun for a week. Then drained it, refilled with clean RoDi water and a bottle of dechlorinator. Let them sit for another few days, drained it and let sit out on a tarp, in the sun, for a week or so until fully dry and no bleach smell. 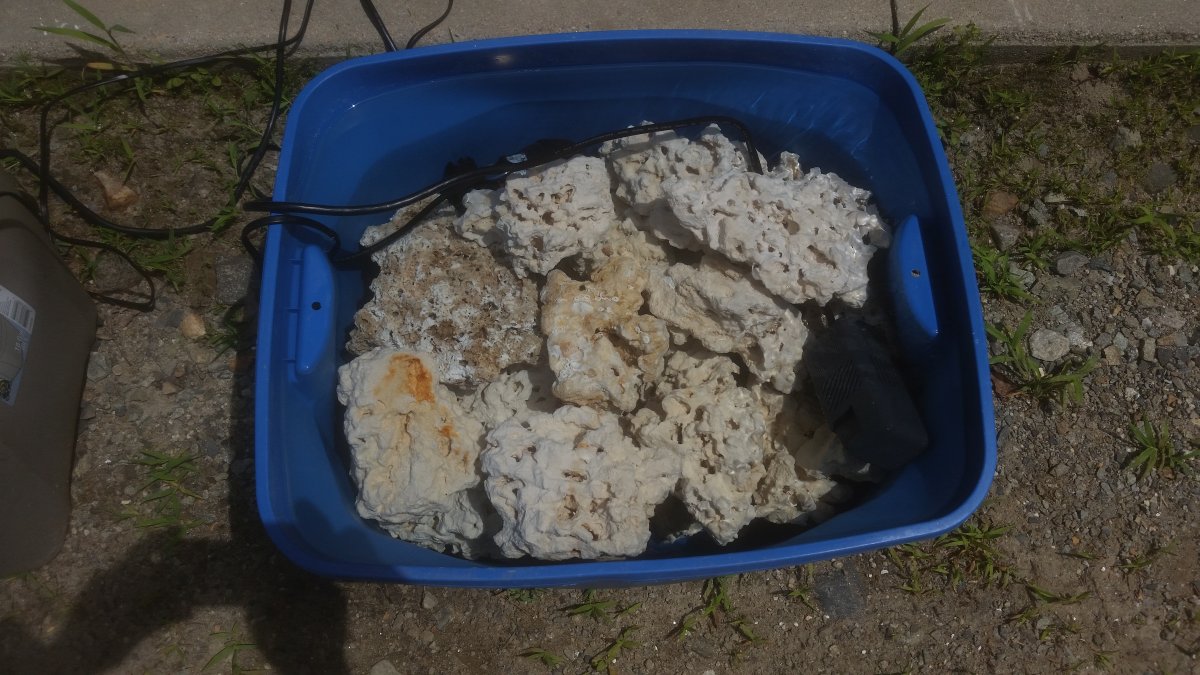 Before adding sand & salt water I filled everything with RoDi water to test for leaks and a final rinse of the tank & rock. I'm glad I did because there was a weird krinkley film on the top probably from building the rockscape. I spent hours skimming it off the top then started up all the pumps, etc. Drained all that & vacuumed it dry.

I added 1 20 lb bag of Caribsea Aragonite live sand and 2 16 lb bags of Natural Reef live sand. That gave me about 3/4" to 1" of sand. Time to FINALLY start filling it with salt water! 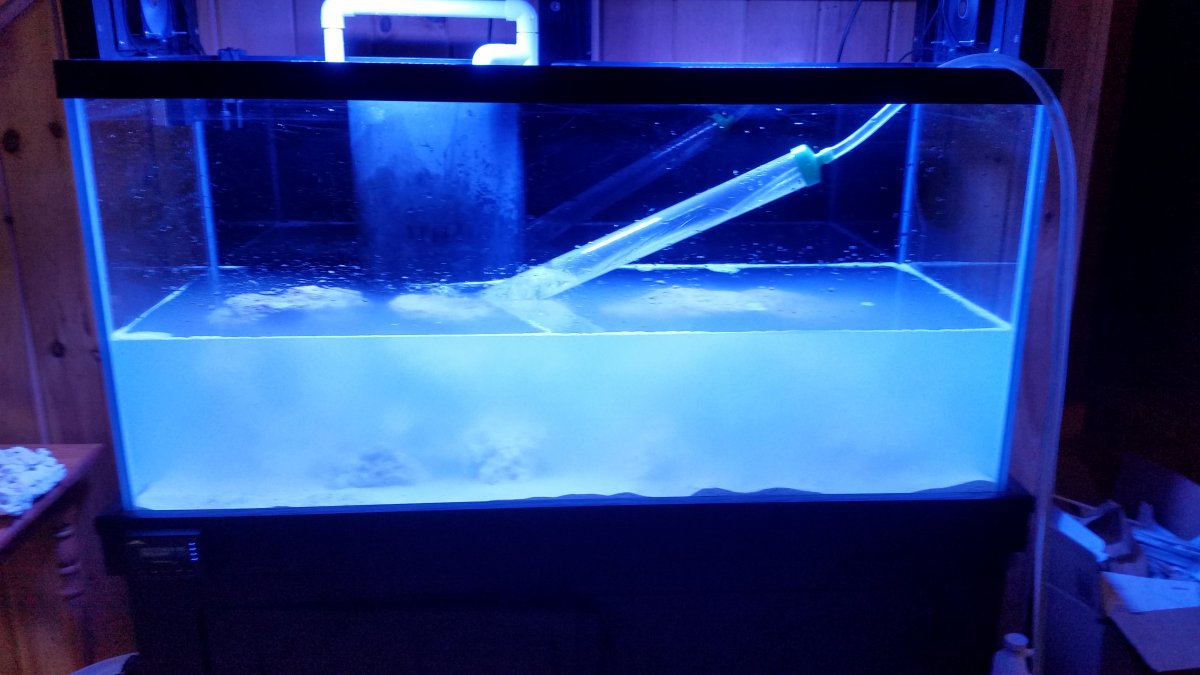 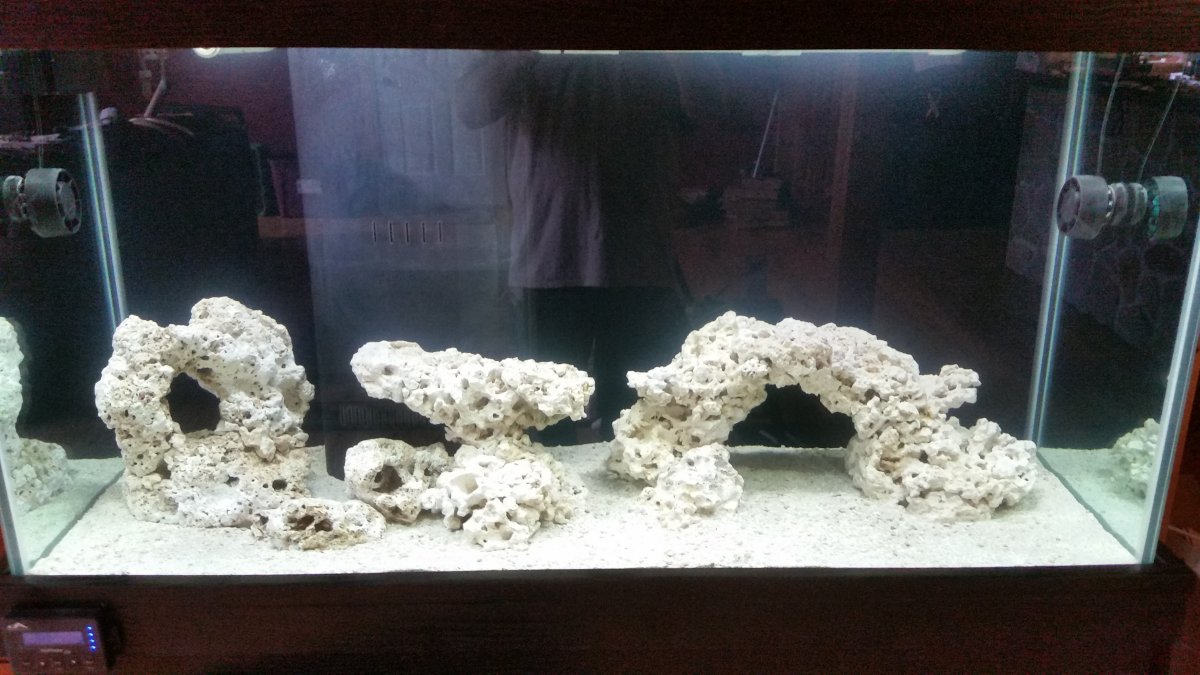 I turned the blues off for the pic otherwise it's just a blue blob. lol

It's been running for a couple days now. I temporarily removed the roller mat and added some rubble rock under where the roller mat sits for some additional filtering and the skimmer will stay off for a bit. I just put some carbon on-line to make sure I get any last bit of chemicals out of it before dosing the bacteria.

I'm going to somewhat follow advice I watched from Dr. Tim on tank cycling (from a MACNA talk). He says to run the salinity at 24-25 ppt (I'm at about 27) and temp about 84 deg F (I'm at about 82). For now I'll count on the small amount of die-off from the live sand to keep the ammonia and nitrites low, until I can measure it. All my test kits are expired. According to him the ammonia bacteria will slow down with high nitrites and the nitrifying bacteria will slow down with high ammonia. He says they both will grow faster in lower salinity and around 84 deg F, also the bacteria will not die from starvation they'll just sit there and wait. We shall see I guess. I'm going to get a Seneye and some test kits to monitor. I'll add ammonium as needed. Eventually I'll bring the temp and salinity up to normal levels after the bacteria have multiplied enough to add fish.

So that's where we are so far. Remember, it's not the destination it's the journey!

TriggerFinger said:
The big overflow is annoying, not sure how they came up with that spot to put it. A corner seems logical to me. Your fiancé is a keeper!
Nice job on the canopy and lights!
Click to expand...

Thank you. Yeah, she's definitely a keeper! 22 years so far.