Oh boy. My newest addition and someone is not happy! 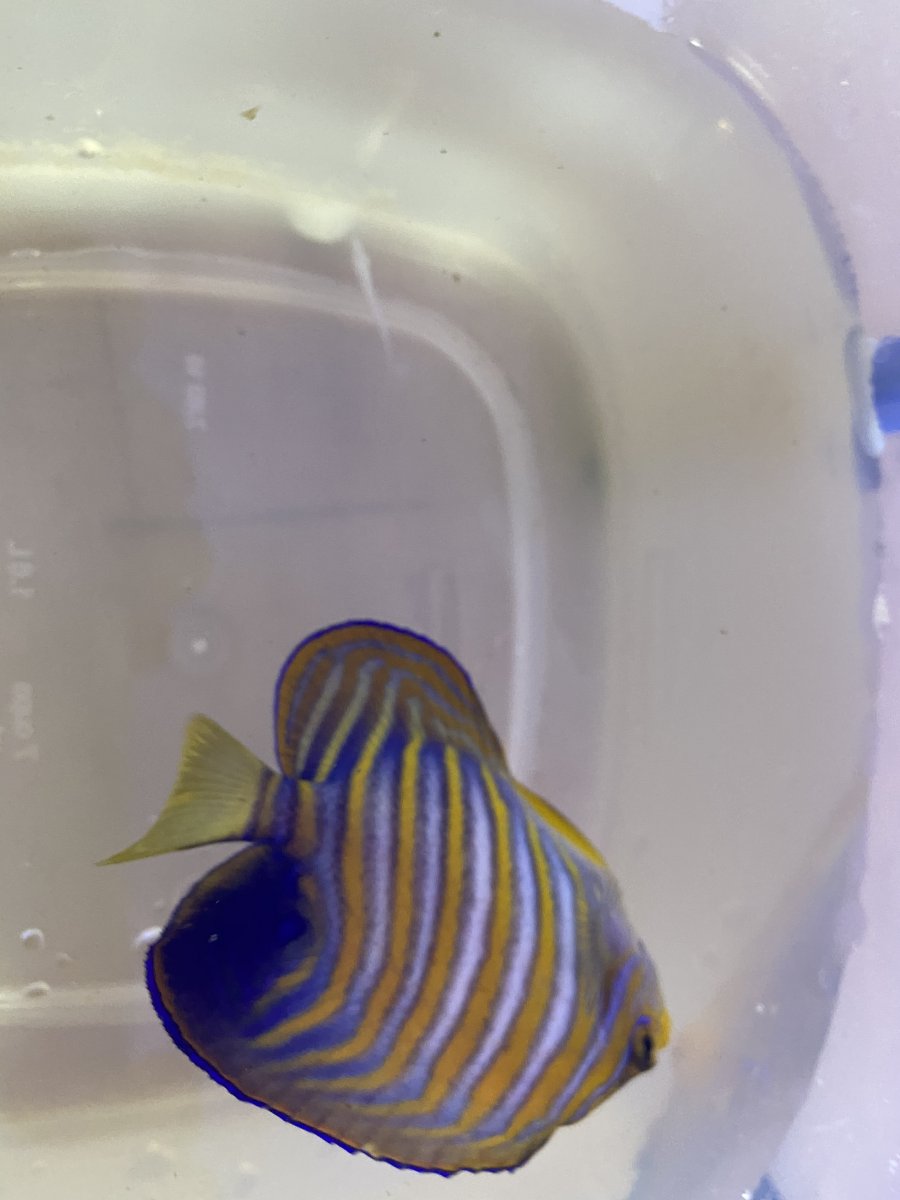 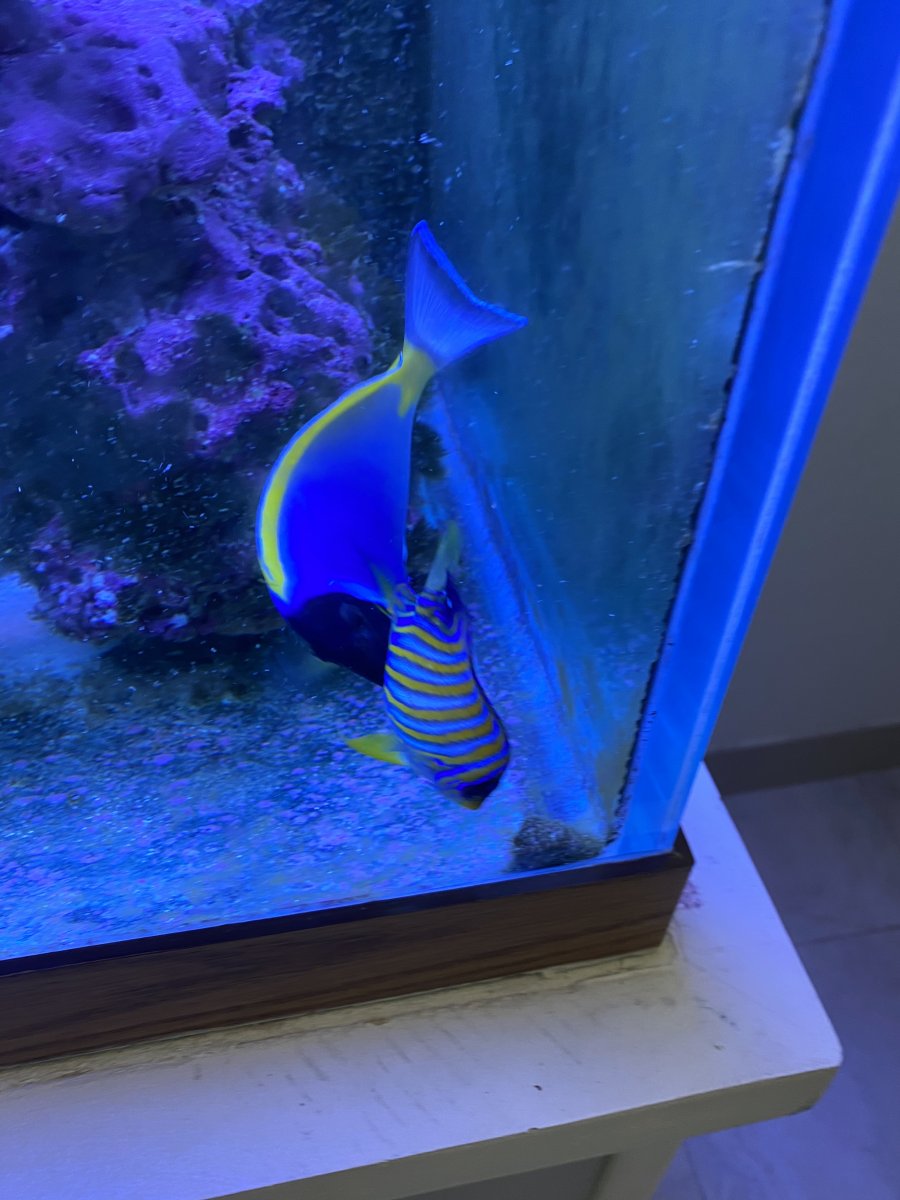 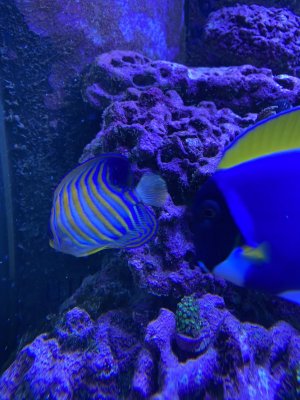 So beautiful...the only angel I would like to have if I ever get a larger tank. This isn’t the one that was just on divers den last night is it??
OP

No got it from my lfs. Came from Bali. The powder blue is beating the hell on it so lights off and it’s hiding. The pbt does it to all largish newcomers, so it’s a an initiation, Lol.

Little guy was eating pellets with gusto at the store so scooped it up and got a good deal.

I hope they can get along. Post more pics when you can!! Maybe try the mirror trick for a couple days?

I had a similar experience yesterday when adding a new butterflyfish. I have some Aptasia and brought home a butterfly that the store claimed would eat them. (We shall see if it serves that purpose, but that is another story).
My purple tang immediately went warzone on the new butterfly, who began looking out of the aquarium at me pathetically asking to take him out. I got out the fish net and chased the purple into a corner a couple of times hoping to get the battle to stop. I stepped away from the tank and instantly the battle was back on.

A little history is needed. Last week I had ventured out from my home quarantine to get frozen fish food and while I was there I had picked up a small copperband butterfly. I observed him happily swimming around the tank when I first added him and walked away unconcerned. The next day my wife asked where he was and I replied that I thought he must be hiding as I didn't see him anywhere. I looked behind and under everything and could not locate the copperband who is still MIA.

The new butterfly is much bigger than the missing copperband but it was clearly a little fish store weak (filmy scales and a few suspect spots, but nothing horrifically out of place). since I am trying to support the LFS's I decided to purchase him hoping that he would not disappear, get healthy and eat Aptasia. I brought him home and fed the fish and then let the new fish go.

It was about 3 hours before lights out when I observed that the purple tank was making full tank rushes directly at the new butterfly and bashing the newcomer with vigor. The tang was clearly hellbent upon kicking the butterfly out of the tank one way or another. The butterfly kept swimming up to the glass and looking at me for help, so I got the fish net out again and began chasing the purple tang into a corner every time it moved. I could see it wasn't getting the message because as quickly as the net came out of the water the tang would immediately flash out from where it had been hiding out and sideswipe the butterfly again at full speed, trying to rip the butterfly a new-one.

As my last-ditch effort to assert authority in the fish tank, I began pushing the net forcefully through the water, not aiming at anything in particular but causing the water to begin sloshing back and forth in the tank. I kept at this for about 30 seconds until the surface of the water was violently pitching around as if a storm had hit. Small wavelets were bursting against the sides of the tank and the water sloshed out from all 4 corners and many other places around the edge of the tank. I told the fish (again) to stop fighting, said a prayer for peace, and walked away hoping that the message would be understood.

I came back 2 hours later and fed the fish a second and third time because they were behaving well enough and the terror between fishes had stopped. I hope your fish will figure out how to have peace in your tank. I always recommend the net, or the hand if you want to encourage the fish to get along. GL

tehmadreefer said:
Just curious, how much was the one on LA? I got mine for $80.
Click to expand...

$80! Did you get arrested for that robbery??

Powder blue will be a jerk for a couple of days.
You can place a mirror by powder blue and it will shift its focus to the other powder blue (THE ONE IN THE MIRROR). Its a mind trick that often works well.
OP

That’s a steal. Best of luck, absolutely my favorite fish but always a heartbreaker. Great news that it was eating pellets, that’s a tremendous step in the right direction.

tehmadreefer said:
Just curious, how much was the one on LA? I got mine for $80.
Click to expand...

dd got $299.99...yours looks like it has better color too. Powder blue needs a time out

I second the mirror trick. It have to be a large mirror that cover a large portion of the tank. None of these 3X3 inches mirror. The PBT will be glue to a 10X15 mirror or one of similar or larger size. The larger the better.
Not only the PBT but all the other aggressive fish will be too. IME, this is an excellent way to stimulate some of your fish. In the wild there will be instants of territorial encroachment. IME, using the mirror routinely will bring the best color out of your fish. I don't put it on for long duration of time, only 30-60 mins several times a week then put it away.
Here is a picture of what I do 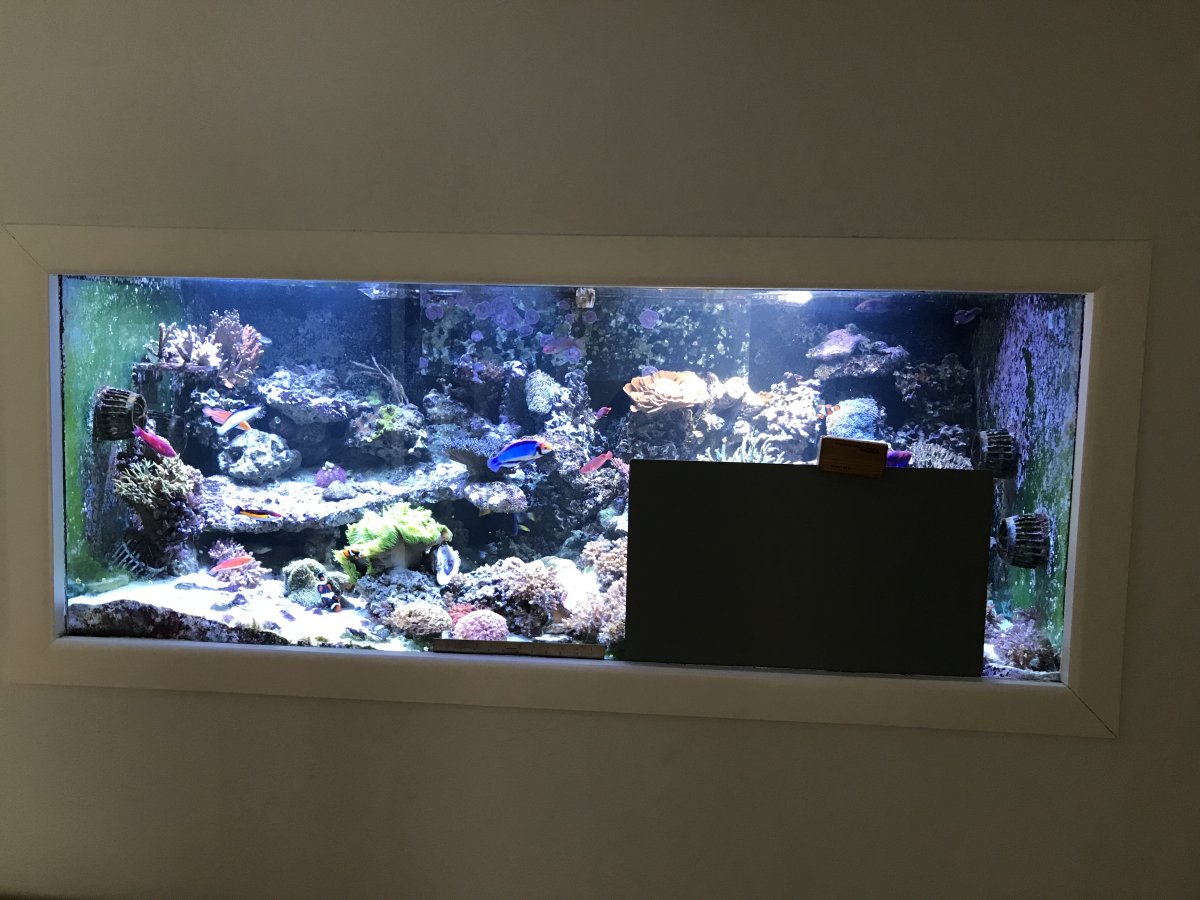 Ya, don’t have a mirror, in the past the other fish just worked it out, fox face, niger trigger and copperband. I am worried about the regal due to already being difficult.ill try the printed pics of pbt and see if that works first.

@tehmadreefer
I would spend a little money and get a mirror. A print picture isn't going to do it. Better safe then sorry. That is a very nice fish to loose. PBT is a terror hell on wheel almost all the time. Not the most aggressive tang we can keep but close to it, certainly in the top 5. Regal angels are difficult to get healthy. IMO, you got to give it the best chance you can. almost all the time, if you want a Regal, they must be added before other tangs and angels.
Good luck.
9 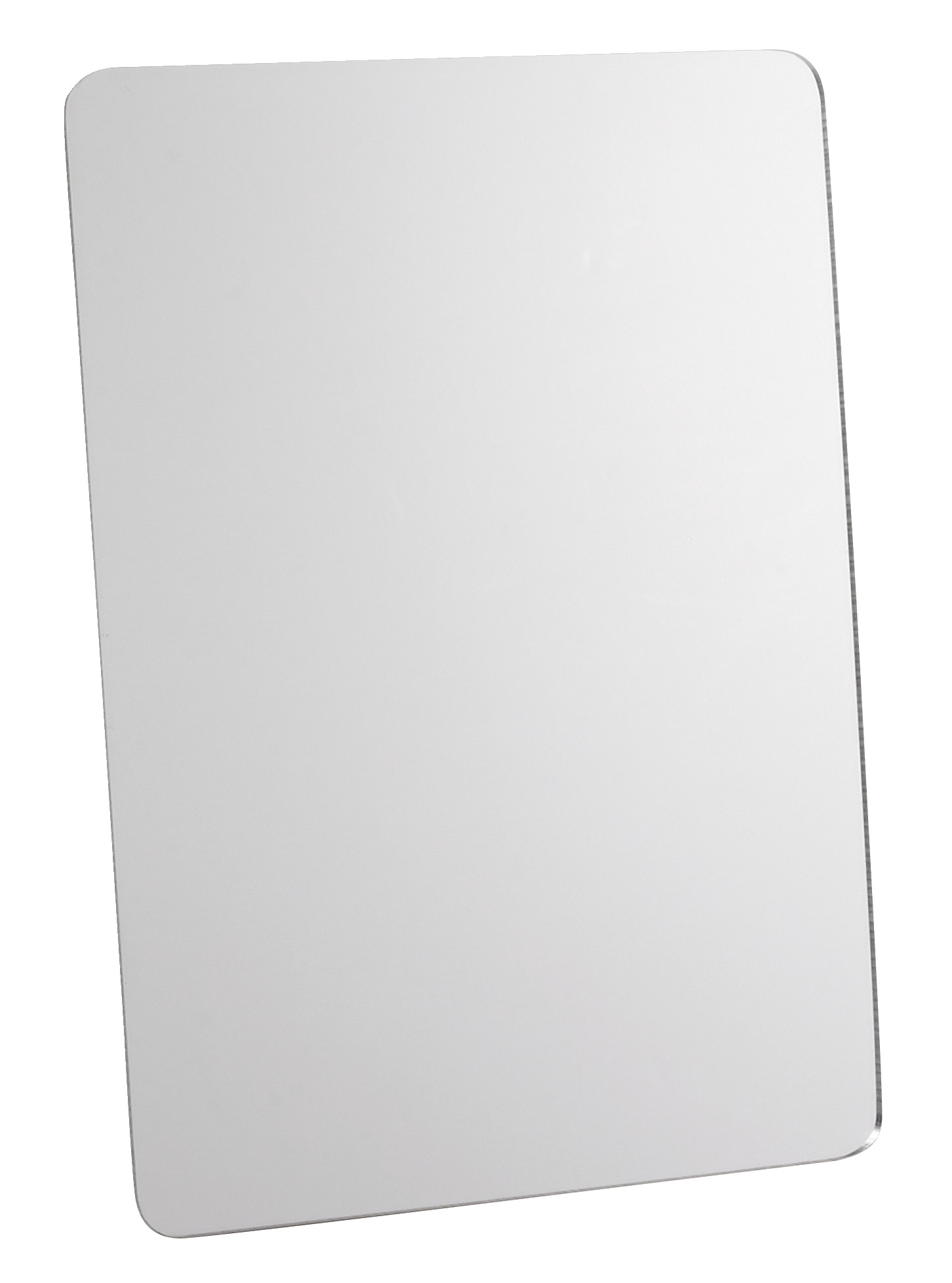 OrionN said:
@tehmadreefer
I would spend a little money and get a mirror. A print picture isn't going to do it. Better safe then sorry. That is a very nice fish to loose. PBT is a terror hell on wheel almost all the time. Not the most aggressive tang we can keep but close to it, certainly in the top 5. Regal angels are difficult to get healthy. IMO, you got to give it the best chance you can. almost all the time, if you want a Regal, they must be added before other tangs and angels.
Good luck.
Click to expand...

Ya the print out are not doing jack. I’ll be going to get a mirror in a few!

Get plastic mirror if you can. Broken glass is dangerous. Secure it. I use my cleaning magnet to keep it from fallen, the plastic glass to boost. I used glass mirror in the past but tape a layer of heavy duty duck tape in the back and the edge of the mirror.
BE SAFE
OP

Tapes a large hand held mirror to the side and it’s working like a charm. In fact all my fish are looking at the mirror now. Regal is flaying flat under it’s hiding rock so hopefully will come out soon, now that the coast is clear.
OP

Well isn’t working pbt still relentlessly chawed the regal. Though the regal does eat pellets and frozen when they come by the cave it’s hiding in.

Can you change up the aquascape at all? Create new surroundings that the pbt isn’t familiar with?