Hey everybody! Long-time forum lurker and planted tank keeper here. Let me give you a little background on this build. Ive been researching reefkeeping for about 10 years with the plans on eventually doing a build and have finally started. This build has taken several different turns during the initial planning stages. Long story short, originally supposed to be a 75 gallon, then a 110 since it is the same footprint of a 75. I then saw an Aqueon 125 at the store so the 110 cherry stand/canopy went to my son's bearded dragon tank. I planned on running the full Triton system so I bought a Trigger Systems Triton 44 sump. One day it dawned on me that I would not be able to remove the sump from the stand if I wanted unless I cut it up since you had to put it in through the top. I definitely wouldn't be able to get another large sump back in it for sure.
Since I was building my dream tank, I wanted it to be perfect, so I reached out to have a custom stand built that would allow me to do everything I wanted. I found a stand builder who was able to do it but the time frame was really long so I started to think. For the price I was going to pay for a custom stand, for an Aqueon mind you, I could pay a little more and really get what I wanted. I just couldn't justify paying that much for stand for an Aqueon. Not to knock their products at all, but the price difference between the stand and tank was a little more than I could justify. So that leads me to where I am now, I sold the Aqueon and bought a Waterbox 220.6

The rock work was just as bipolar. Started off with Pukani arranged in mostly a rock pile. Then I saw the NSA BRS series and decided to go that route. I used E-Marco mortar and BRS thick superglue 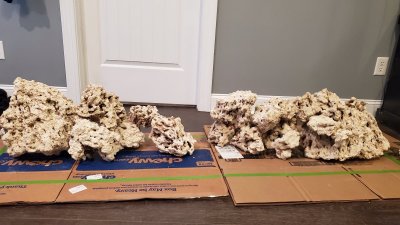 Started adding water Oct 25 and I started the fishless cycle on Oct 31st with Dr Tim's all-in-one. Im following his recommendations from his Macna talk with lower salinity at 1.020 and higher temps at 83-84 initially then adjusting to 1.026 and 78 over the course of several days after cycle is complete. 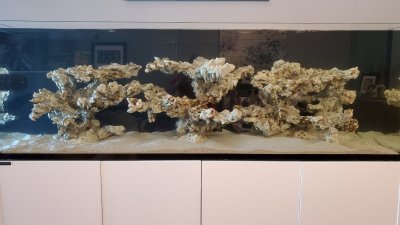 
Side note, the MP40's did NOT like the 3/4in glass at first. Continued to slide down the glass. I realized I didn't have the gasket in place. That solved that issue.
OP

So now we wait for the cycle to complete! 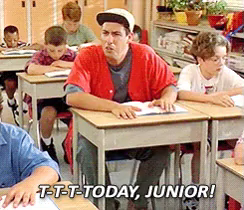 DVal said:
The rock work was just as bipolar. Started off with Pukani arranged in mostly a rock pile. Then I saw the NSA BRS series and decided to go that route. I used E-Marco mortar and BRS thick superglue

Thank you! Use some accelerator when you initially attach it with glue and then go over it with E-Marcos mortar after you complete it. Order way more accelerator and glue than you think you'll need. I used double what I thought I would. Try not to move it for about 24 hours after putting on the mortar. And also mix very very small batches of the mortar at a time. It sets quick and is almost unusable in about 20 minutes.

BRS has a great video going through the steps.

I skipped the last step with adding sand since it will all be covered in coralline andthe same color eventually.
OP

Had a weird situation this morning. Im currently breaking in the skimmer. There were so many that bubbles are getting through the bubble trap to the return section. I came in this morning and found that my Osmolator had dumped about 8-10 gallons into my sump. Luckily no livestock yet. My safety float switch saved the day..in hindsight, it was probably too high. There shouldn't have been any siphoning with the line terminating well above waterline in the sump and ATO reservoir and the fact that the safety switch stopped the flow. There were alot of bubbles on the optic sensor. Im wondering if that may have caused a malfunction? I lowered the safety float switch for the Osmolator in case it happens again. I take it as a fail for the optic sensor but Win for the float switch!
OP

I believe it was the amount of microbubbles on the sensor. Skimmer has finally settled down and it has not happened again. I also installed a Phosban 550 reactor running carbon 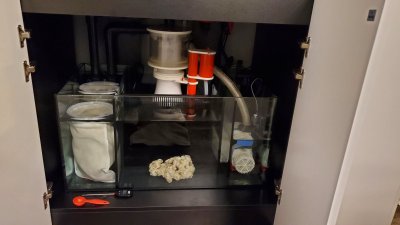 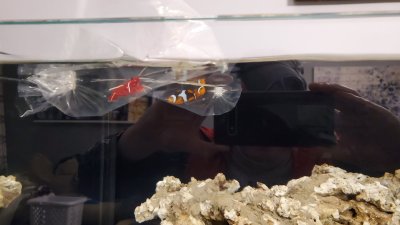 I've got part if the lighting system up with 3 Kessil A369X with the wifi dongle. Will be adding 2-3 more as needed.
OP

New additions added today from New Wave Aquaria (Thanks Jenn!!). They do a great job with a good quarantine process. Added a purple, powder brown, white tail, and yellow tang.

hey hows the tank going long over due on an update.
OP

Devaji said:
hey hows the tank going long over due on an update.
Click to expand...

Hey, thanks for the reminder. It been long over due
OP

So I'm coming up on 1 year and it's been awhile since I've done a tank update. All of the tangs are doing well, but I did have one of the clowns jump. I ended up getting a clearview lid and got my remaining onyx percula an orange storm mate. The tangs get along GREAT. There are the usual spats every now and then, but nothing major. They actually school together the majority of the time. The little purple tang is now the largest. Ive since added a solar wrasse, pistol shrimp,/yasha goby pair, and a couple of peppermint shrimp. I have a Watanabei angel and 2 Helfrichi firefish in QT at the moment. I did have an issue with a CBB and 2 Laboute's wrasses that did not ship well. I plan on trying these again at some point.

For the coral, I've added quite a bit. Started off with zoas and acans. I've recently started adding some acros. I'll put a list soon in a follow up.
I've had the typical problems that most have the first year. I had 2 big hair algae outbreaks and am currently almost cleared from the second. I battled the first with manual removal and it went away no problem. The second one is another story. I have fought this with lettuce nudibranchs, manual removal and increased water changes. Didnt touch it. I had to resort to Vibrant, which has almost cleared it up. Nitrates have been 2-4 and phosphate .02-.05. I'm sure they were actually higher due to the algae.

The second issue I had was dinos. These showed up after using chemiclean for cyano. Fortunately, I was able to beat these relatively easy with removing the filter socks every morning when the dinos entered the water column and dosing Microbacter.

Third issue I had was aptasia. I dip and scrub every frag, but of course, they still get in. I attempted to fight these naturally and added a couple of peppermint shrimp. They only take care of the aptasia directly around their hideout. They never venture out further than a few inches. Not sure if my skunk and fire shrimp scare them or what. I have found my fire shrimp standing in front of their cave staring multiple times...so I don't know. I added that CBB to attempt to combat them, but that didn't last as I previously mentioned. I finally tried F-aptasia. Works like a charm. I'll buy a CBB and quarantine it myself and attempt one of those again to keep the aptasia at bay. Ive been buying all of my fish pre-quarantined and having them shipped in. I've learned that I should probably attempt to quarantine more sensitive fish myself instead of adding additional shipping stress.