Hey guys figured id start a build thread for my new build and get some feedback!

I got into saltwater tanks about a year ago with a rimmed 29 gallon tank. I'm starting the steps to upgrade to a 75 gallon tank. Currently in the process of making the stand for the 75 gallon tank. I went with a structure of 2x4s which I'm cladding with 3/4" birch plywood. for the finish I'm planning on doing two coats of BIN shellac primer and then 2 coats of Sherwin Williams Emerald urethane. When it came to picking color me and my SO chose Oceanside which is a dark blueish green. We thought that was pretty fitting and we are hoping that it will look just as good on the stand as it did on the paint sample. There is always the chance it will clash with everything though.

When it comes to the tank itself we are using a 75 gallon Aqueon rimmed tank from Petco. For the overflow we are using a drilled Fiji Cube 1200 GPH overflow box. I'm hoping the drilling goes well as there seems to be some chance of the Aqueon tank backs being tempered. I've checked it out with polarized glasses and all the other tricks and it seems to not be, but I'm still very nervous that it will end up being tempered. This overflow uses a bean animal design which I wanted for the redundancy and quiet operation aspects. This will be plumbed down into the sump with a couple of unions for easy assembly. Using a Spears gate valve to tune to flow. One question I have if anyone who has used this overflow before is setting up the elbows in the box itself as it looks like it will be a tight fit. Some example photos would be appreciated. For flow I have a Hydor Koralia 1500 GPH powerhead which I'm looking to expand upon. Lighting comes in the form of the black box that i had above my 29. I know this isn't great and will eventually be upgrading to something that can handle corals but this tank is just a fowlr set up right now.

The Sump itself is going to be the old 29 gallon tank to save some money not having to buy a full sump. I'm planning on using the Fiji cube diy sump kit to divide the sections and allow for use of filter socks. I'm planning on making the protein skimmer area as small as possible since i will be using a reef octopus classic 90 HOB which I'm bringing over from my 29 gallon tank. Eventually I hope to move this to a frag tank or quarantine tank, but for now this will give me more room for a larger refugium. On that note I'm looking for cost effective refugium lighting options if anyone has some suggestions! I'm also looking for suggestions on the return pump/pumps. Ideally id like to have two pumps for redundancy but i think to start out with I will just have one and leave a union plus valve to separate the two return bulkheads later down the line. My leading option right now is one of the Jebao mct-6000s but I'm nervous about longevity/quality. I cant deny I like the price a lot more than some of the other options.

I'm hoping to have some photos of the stand this weekend as it gets closer to completion and then pictures of the tank plumbing and other prep.
Hope you guys enjoy and id love to hear your thoughts!

Finally getting around to posting some pictures of the stand. Getting close to paint and hanging the doors. Then it's lots and lots of plumbing. 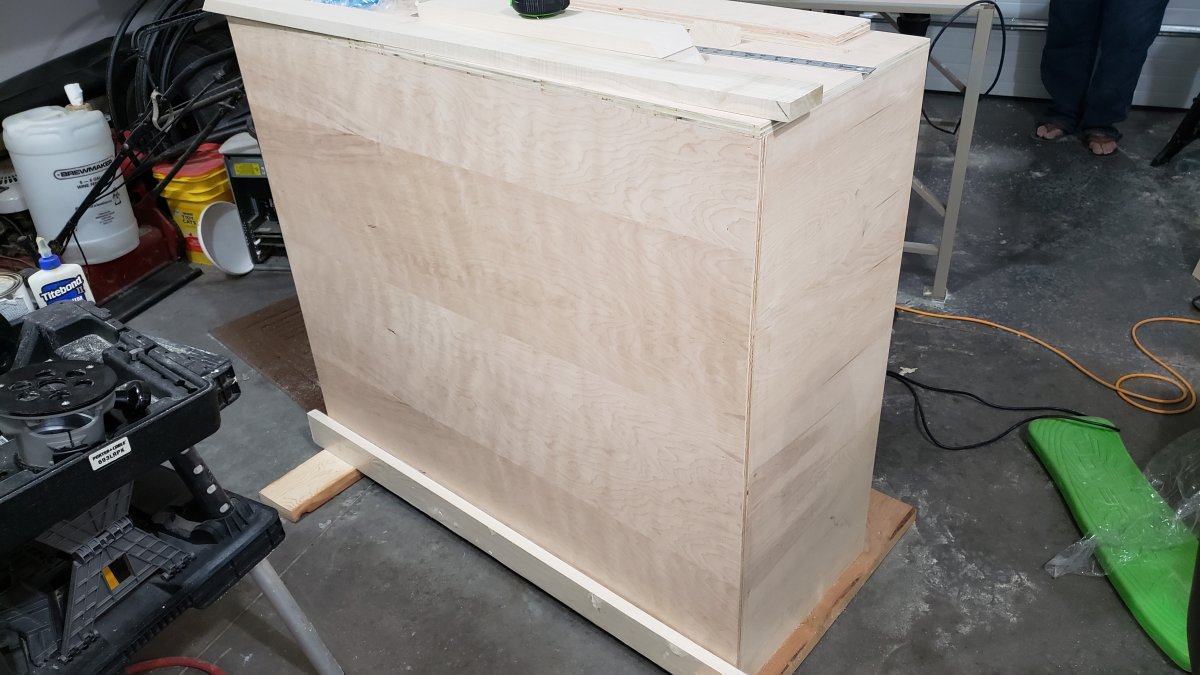 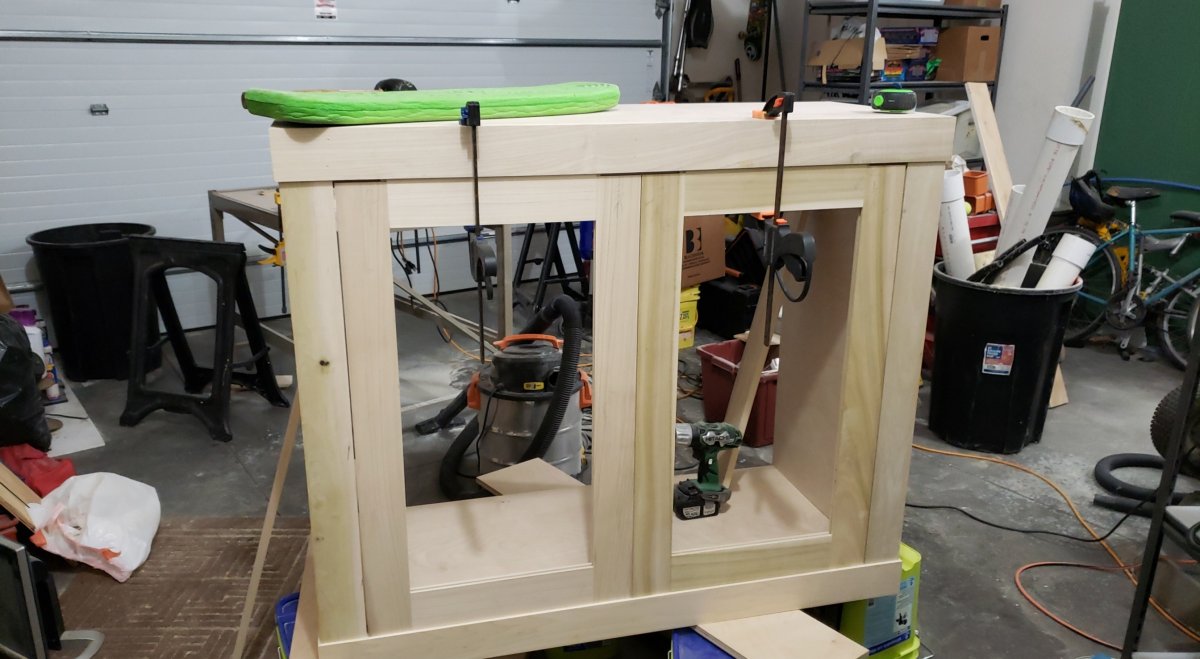 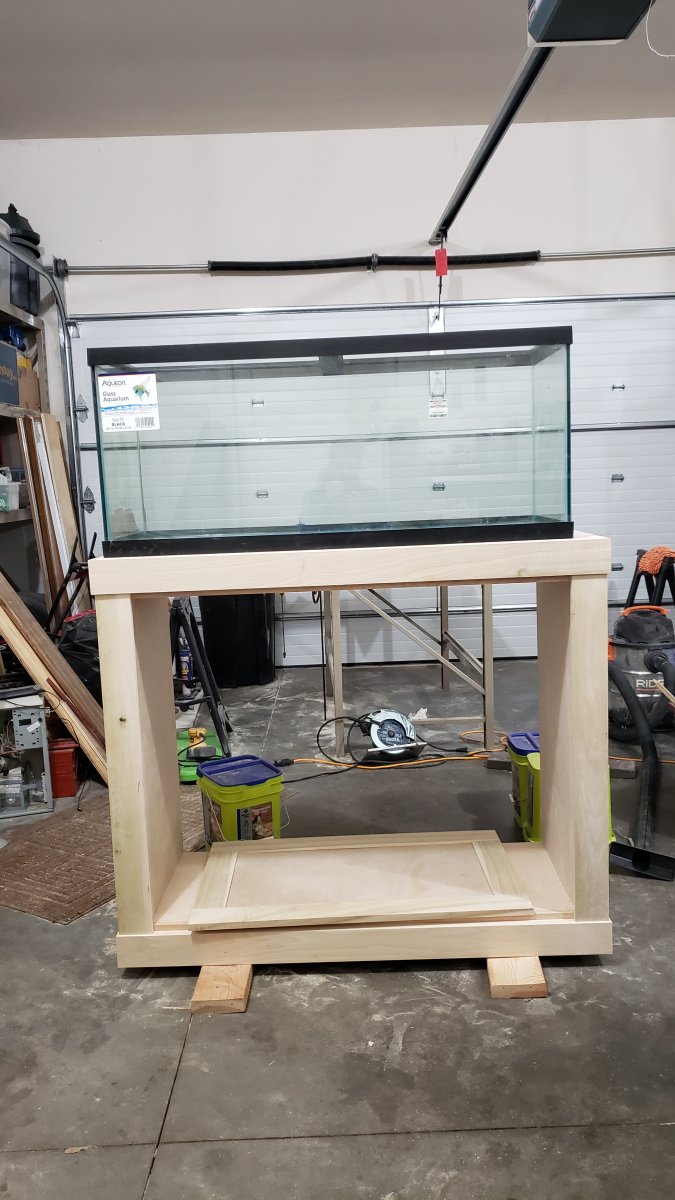 Drilled the holes for the return bulkheads, I think it could have gone better but as long as it holds water il be happy. The inside chipped a little bit. Any ideas on how to get a cleaner hole? I used a wood jig to keep the drill bit straight and taped the inside to stop the plug from falling. 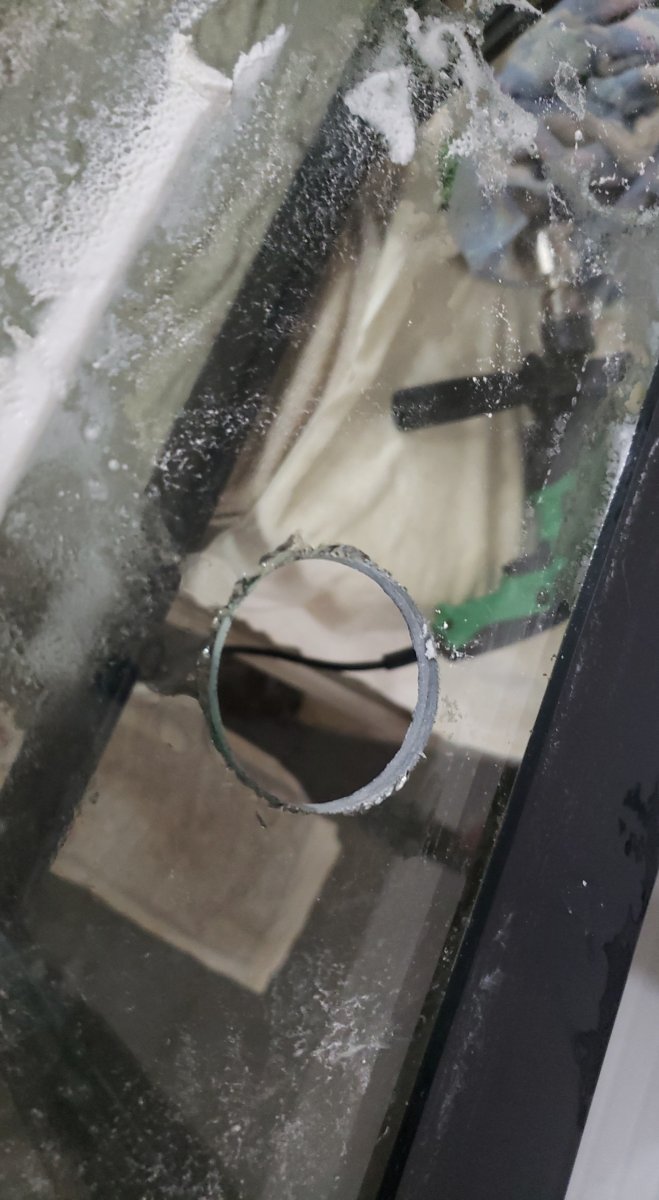 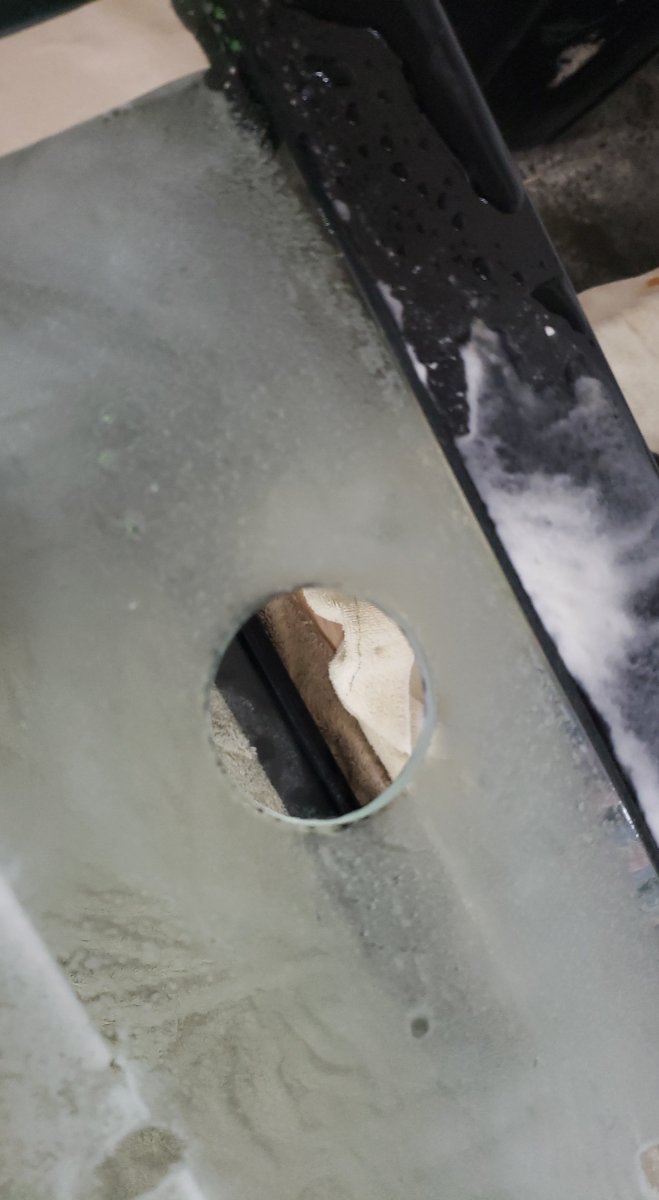 looks good, can only suggest more water and less pressure when drilling

mpl000 said:
Drilled the holes for the return bulkheads, I think it could have gone better but as long as it holds water il be happy. The inside chipped a little bit. Any ideas on how to get a cleaner hole? I used a wood jig to keep the drill bit straight and taped the inside to stop the plug from falling.

Update on tank progress since it has been awhile.

Progress has been slow as I have had a lot of things going on and not a lot of time to work on tank. But here are some things I have managed to get done!

-Door hinges and doors have been attached
-All the plumbing for the tank is complete which I then leak checked. I also totally forgot to take pictures as I was super stressed about making sure it wasn't leaking. 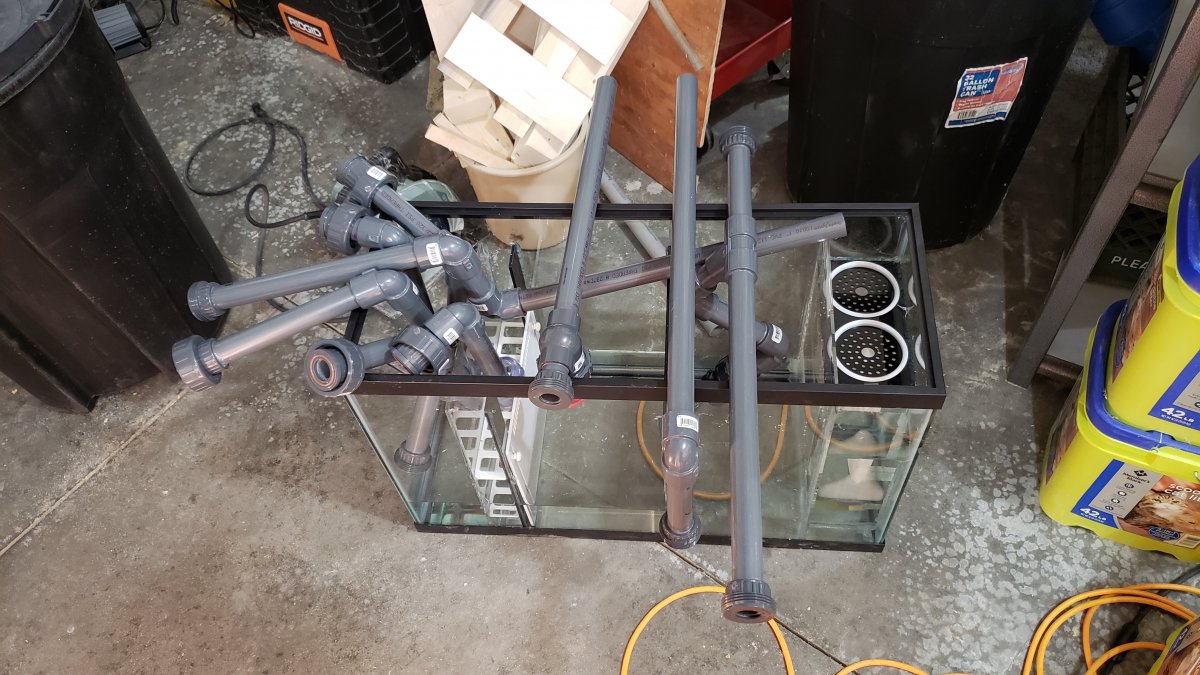 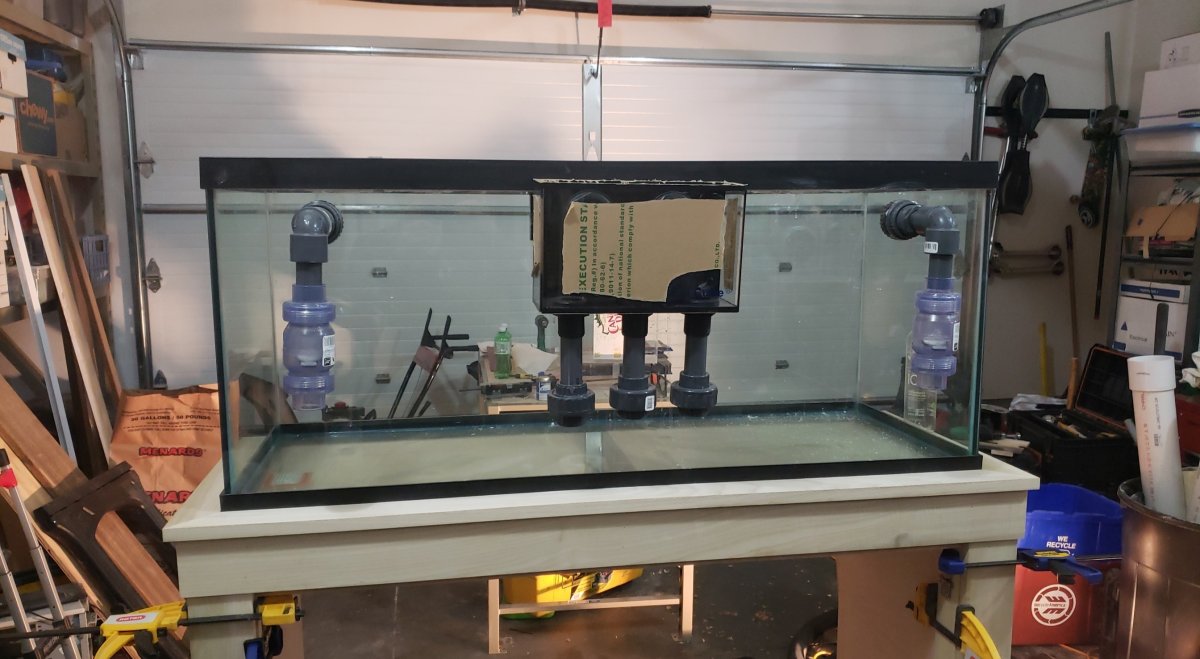 -Got the sump baffles installed into the 29 Gallon tank 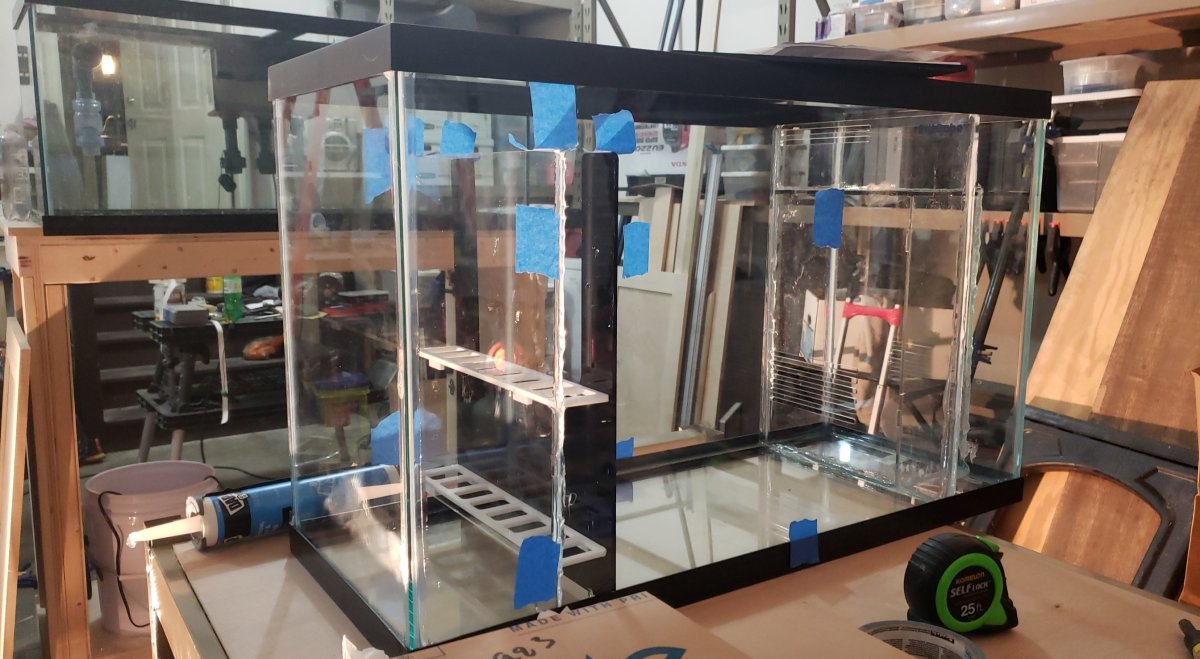 -Top trim has been added
-Stand is primed for paint 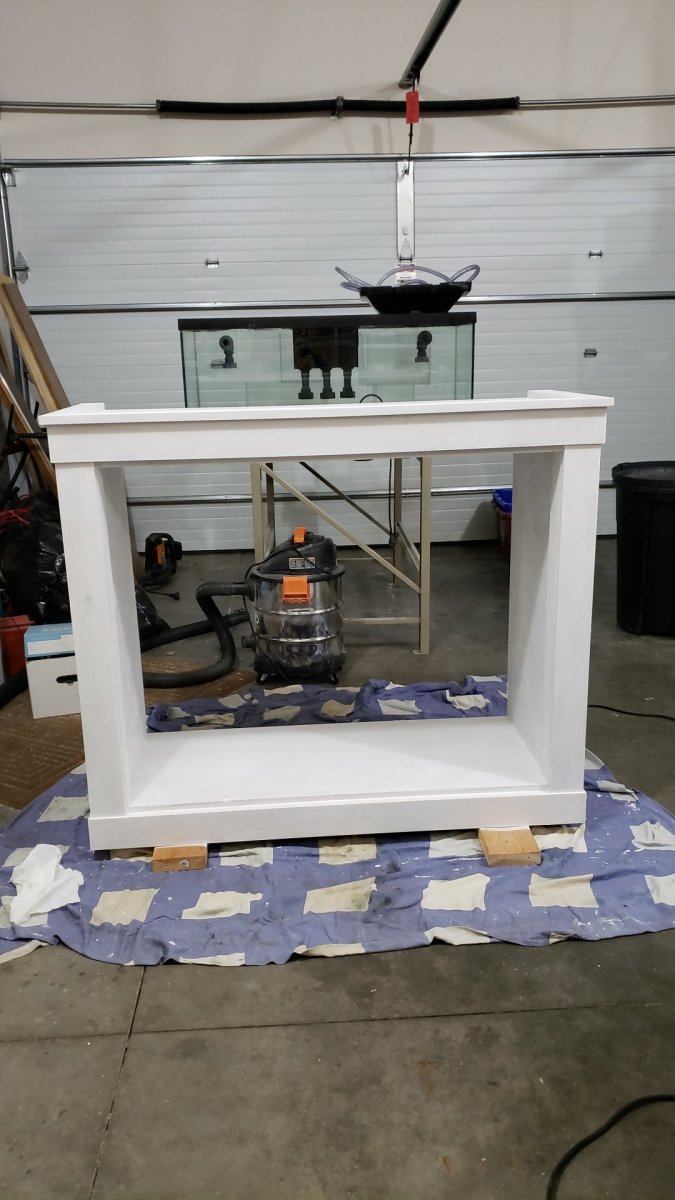 should have the stand painted by the end of the weekend and then have to transport everything to its final location.
Finally seeing the end of the tunnel on this project!