A few months ago I decided I wanted to get into saltwater, and specifically keeping a reef! I’ve had a few freshwater tanks running over the last year, and grew up with a sizable pond at home. Keeping fish wasn’t new, but saltwater certainly is!

I was watching a lot of BRS. That was what turned my fear of the complexities involved with keeping a reef, into something I felt I could manage.

While learning more and more, I watched for local deals and starting getting equipment. I found:

At this point, a tank that had been running for two years came up for sale for a price I couldn’t pass.

He and his wife had gotten the tank setup together, about a year ago they divorced, and he was getting a notice that his lease was up and neither of them wanted to take care of the tank any longer. Some time during their care, they had a die off, where they lost some fish and corals, he couldn’t really give any solid details as to what went on, but there are signs of old drag plugs, and epoxy on the rocks

I set up the tank in a temporary spot while I made sure the 40 breeder was ready to transfer as much as I could move.

I bought and installed a Jaxracks 40 breeder AIO kit in the back of the tank. Filled it with saltwater, got the tunze skimmer in the chamber after the filter socks and used the 307 as a return pump for the moment.

I brought over some of the rocks that were in the tank, and a bit of the sand. I left the rock that was developing a cyano bloom, and a couple of the other large ones that were less attractive. The picture is as the tank sits now. The zoas have opened up rather quickly after this move. The Duncan has not yet. I suspect the location of the Nero 3 is a little too strong for the coral. The second Nero 3 had issues when I got it, and is currently in the mail on its way back to AI to see if it can be repaired.

I did read that the magnet for the Nero 3 is not designed to be submerged. So I need to move it. The Duncan is on a big frag plug that I need to pick a spot for, and adhere to a rock.

I got half a dozen bumble bee snails last weekend to cut down on the vermitid snails. I have a plan to pickup an arrow crab this Saturday to work on the bristle worm population. I may be moving too quickly with livestock. I’m gonna let it sit for a while while I let the tank parameters stabilize.

The only other change I’m going to make in the short term, is add some chaeto to the refugium chamber to help nutrient control.

I know I have some more pests that need dealt with, but my knowledge is still limited. I’m hoping to have a relatively low maintenance system. Something that can sustain with small regular water changes, Has livestock to control pest populations, and nice colors for viewing.

Please feel free to make suggestions, and ask questions! I’ll continue to post updates and likely ask questions as things progress. I’m very excited about how it’s come together so far, and can’t wait to see how it progresses 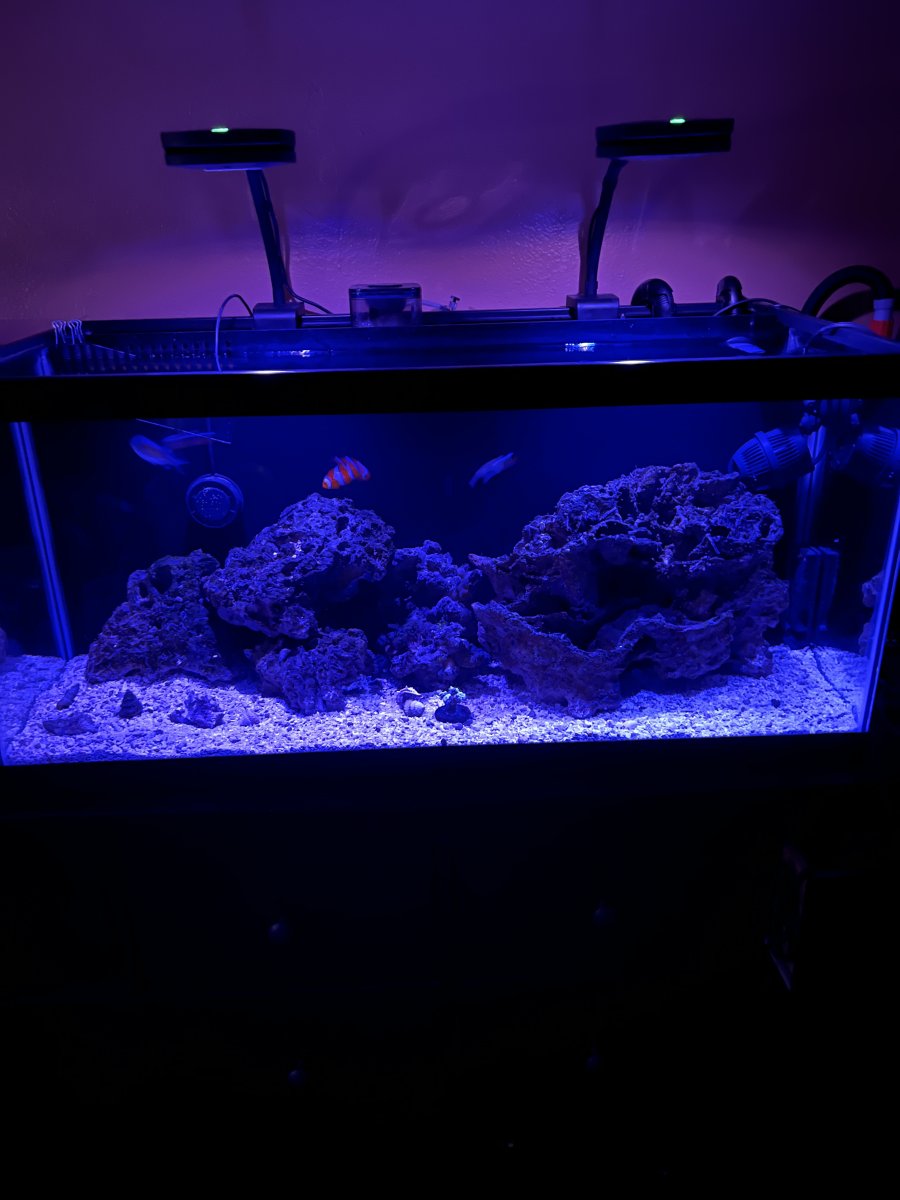 Rating - 0%
0   0   0
The arrow crab hasn’t panned out yet. My usual local shops haven’t had one on hand.
I did pick up an emerald crab to work on the little bits of bubble algae in the tank.
I also got a handful of chaeto to get in the fuge chamber and have it on a 3 hour light cycle to let it acclimate. I’ll be adding 1 hour per week, until I get to 8 hour photo cycle and see how things stabilize after that.
I’ve moved the Duncan to a spot with a little less flow and it seems happier. I also was relying on a floating thermometer style hydrometer, and couldn’t figure out why the inverts all seemed to be acting lethargic. I compared the reading to one of those hand held plastic dial Hydrometers and saw the level was up to almost 38ppt!
I removed my floating hydrometer and did a partial water change to get my SG down to 1.025.

Everyone seems happy at the moment. I do have one hermit that hasn’t been moving from a front corner of the tank since finding my salt issue.