I've been in and out of the hobby for 30 years and my most recent entry was a second hand Res Sea Nano that I enjoyed, but I found that I missed having more room and a sump, so I've decided to upgrade to a 60 cube. As with most upgrades my plan is to try and save where I can by using existing equipment from the RS nano.

60 Cube (24x24x24) - it's a framed tank that I've drilled and fitted with a Modular Marine 1200 overflow. I built a 50" wide stand (photo below) so the tank can sit on the right side and I can have an open face controller cabinet on the left side in back. I'm considering mounting a pair of the small BRS media reactors in the bottom of the upper cabinet so I don't have to crawl around to change out carbon and gfo. I framed out the doors of the tank with pale blue acrylic and have led lighting mounted high in the cabinet so I can see when doing maintenance plus I thought it might be cool to be able to see the sump and plumbing. I made the mistake of (over)building this stand in the basement and then had to rent a motorized stair climbing dolly to get it up to the first floor.

20 long sump using a Fiji Cube kit that I'd highly recommend for anyone wanting to DIY and save a couple bucks.

Skimmer is a Bubble Magus 7. MD had a special on it and the reviews seemed positive so I'm hoping it performs well.

5 gal Innovative Marine reservoir - I love the slide out drawer for easy filling and the stand/doors configuration just works if I angle the reservoir in the door frame.

ATO is the Innovative Marine Hydrofill and matching pump. I'm always surprised when I see ATO threads and nobody is using this. It's been super reliable for me

Return flow is via a Reef Octopus Varios 4. Plumbing is almost complete using 3/4" which was the overflow bulkhead size. I splurged a bit and bought some orange pipe and the grey schedule 80 fittings. I have to admit it looked sharp when I was dry fitting today.

In tank circulation for the moment will be a pair of MP10's connected to an Apexel using the wxm module. I know that I'll need more flow for sps and am considering one or two Icecap 2k's or perhaps a pair of Tunze or Octo Pulse. Since the tank is only 24" wide I have concerns about how a pair of Gyres might be visually imposing. I like the idea of having flow controlled via the Apexel but that would mean buying the vdm module if I go with 0-10v pumps. Once you start looking at things like the Hydros wave engine the price starts to snowball so it's very likely that the MP10's will be on the Apex and the other pumps will run some other interface independently. The only real inconvenience I can see with this is killing flow when feeding.

Dosing of 2 part will be via a DOS.

Lighting for the moment will be four t5's and an Apex 160we which I already have. I've not built the hood yet but plan on leaving enough space for another pair of t5's by utilizing some angled mounts so I can eventually end up with six t5's and a pair of 160we's. I want to see what the par looks like with the four t5's and single 160we before deciding what else to add but my goal is to keep that Kessil shimmer if possible and I do already have the spectral controller.

This will be my first bare bottom tank so I did pick up a black abs panel for the bottom and will be building the structure using a mix of Liferock (shapes and branch) and perhaps a couple of old pieces of Marco Rock that I have laying around. I'm looking forward to seeing what I can build using the eMarco mortar which I've never used before. 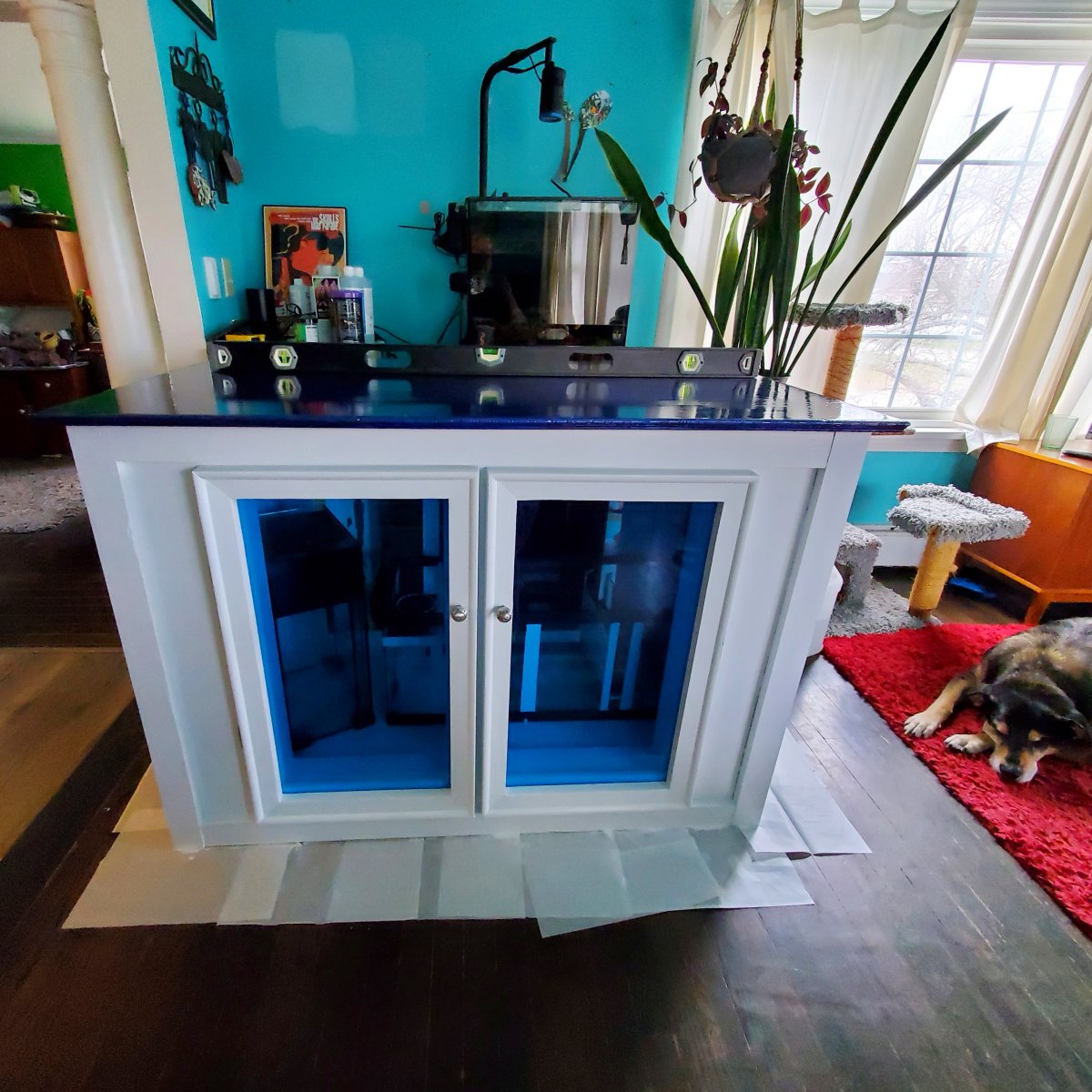 ps. Anyone want an old stinky hound? He's not that bright, but handsome.

I'm setting up a 60 cube as well. Your stand looks great! I wish I had your skills.
OP
J

Thanks @501Reefer I think in car terms the stand would be considered a "5 footer" because when you really get up close and look at the joints there is not a high level of craftsmanship.

I was really pleased with the doors which I made from heavy duty frame rails from the art store. I had originally used a forstner bit to drill some pockets in which to sink some magnets for attaching to the stand but in the end I found it difficult to make the panels line up straight so I ended up hinging them and the magnets just act as a lock of sorts.

Overall, I'm pleased with how it turned out and I learned bit too.
OP
J

My build has been stalled for a while but I'm getting back to it now.

I'm trying to stick with the Hydros direct drive compatible pumps and feel pretty certain that if I go the route of 3 gyres that I'll be running them at 40% max.

Curious if any cube owners are running 3 gyres and what anyoption of my 2 options might be.
OP
J 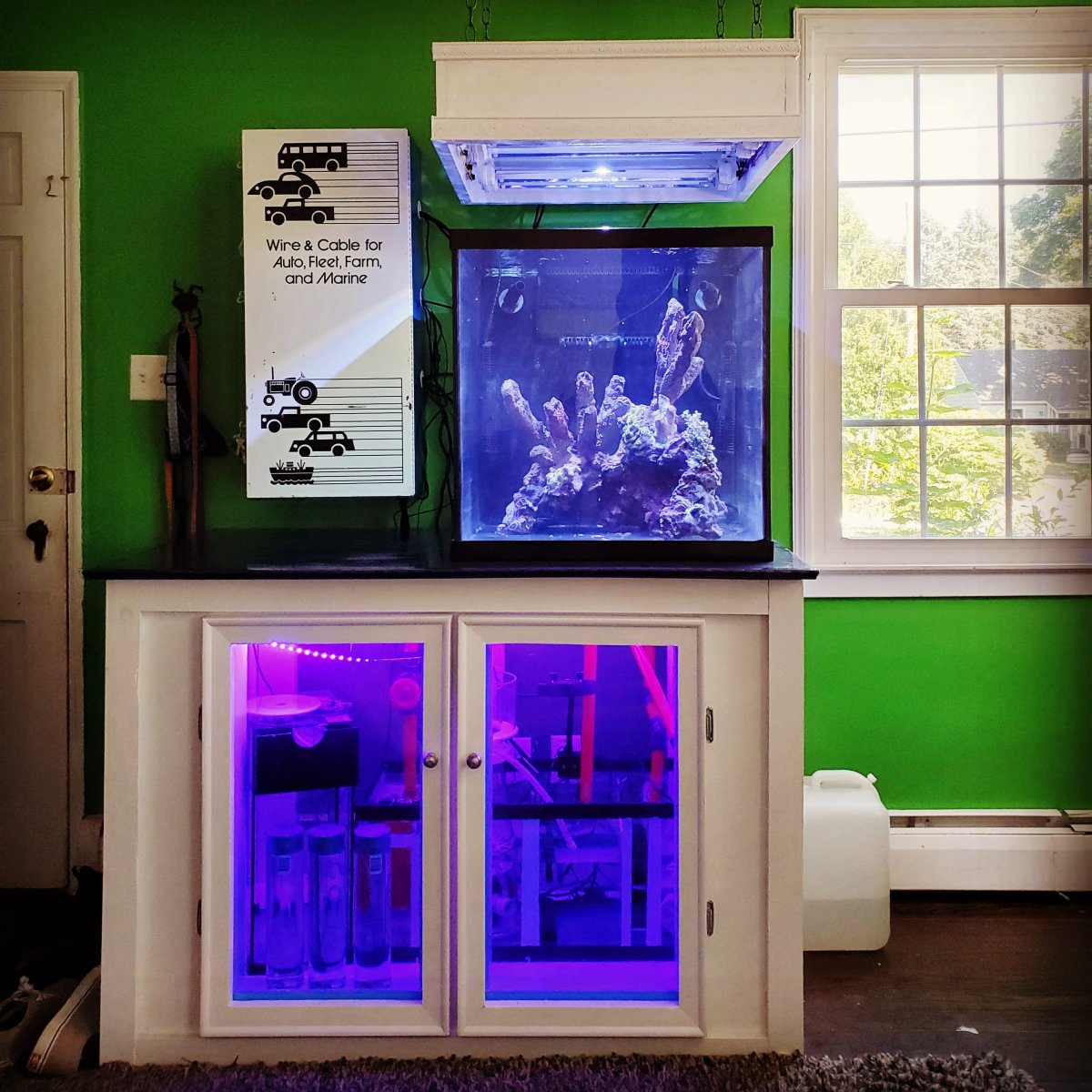 So here's the final inventory that it took to get this far. A fair amount of equipment was carried over from a 20 cube that's just housing a pair of clowns and will be phased out once the cycle takes place.

60 gal Seapora cube with rim because I feel like I've been burned by rimless too many times over the years. I have a 12" Modular Marine overflow set up as a bean animal that drains into 3 different sump chambers via orange pvc and schedle 80 fittings from BRS.

Homemade 36" tall stand (overbuilt - I had to rent an electric stair climber dolly to get it out of the basement). The doors are made from nice chunky picture frames from the local art store and some pale blue acrylic I ordered online. An inexpensive LED string light set with a remote lets me work with some light in the sump or get funky with some colors.

DIY 20l sump using a Fijicube kit that was very easy to use. The sump holds a Bubble Magus Curve 7, Finnex titanium heater, probe holder and Varios-4 return pump. There's also a Kessil h80 over the chamber with the heater so I can export some nutrients at some point.

Lighting: I built a hood to match the stand in inside the hood are 4 T5's (2 actinic and 2 coral plus) and a Kessil 160 tuna blue. I'll likely upgrade the 160 to a 360 at some point but the hood is prepped for it already so the swap should be easy.
Brains: That cool looking metal 70's cable and wire cabinet that was once in some repair shop now houses most of the electronics. I have an Apex EL for monitoring PH and controlling the temp. The lighting schedules are also running on the Apex but I'm just using it for basic on/off functionality. While I have the older spectral controller I did not bring it forward to this build since I never felt like I got much value out of it. I could always use an apex module to control the Kessil but with the T5's split into 2 banks it's easy to just fire a pair, and then the second pair, and then the Kessil before reversing the schedule.

Circulation: This is an area where I really went back and forth trying to decide what to do. In the end I decided to purchase the Hydros Wave Engine and run it with 3 direct drive gyres (a pair of xf330's and a single Icecap 2k). It was nice to shed 3 power bricks because as you can see there are already a lot of wires that I need to tidy up. The Wave Engine is pretty slick and the support that the Coralvue people offer on R2R is top notch. It's taken a lot of work to make it this far and out of everything the Wave Engine seems like the coolest part to me. The 3 gyres can really move some water around and I think there will be some time spent fine tuning things once I start adding corals.

Aquascape: I pieced together a "C" shaped ringlike shape using one box each of Caribsea Shapes and Branch rock. I used all of the shapes and only 3 of the 6 branch pieces. I put it all together with eMarco pink/purple mortar along with a couple of smaller dead coral skeletons that I had from previous tanks. The eMarco mortar is good stuff but as others have noted, there is a short window when it is workable so mix small batches to minimize waste. This is my first bare bottom tank and I'm not sure how feel about it. I keep expecting to see sand instead of the black plastic I put down on the bottom. I'm going to see how it looks once filled in and will then decide whether I want to slowly start adding some sand.

Sorry, this process was not better documented along the way. I'm just relieved to have reached the point where I started the cycle so hopefully in 4-6 weeks I'll be able to move the clowns over and start placing some corals.

I told myself that I was going to not work on it while it cycles but part of me wants to set up an AWC station in the basement and hook up a DOS so I won't have to lug any jugs Nobody's going to try and talk me out of that right?