Droopy hammer and not fully opening

I recently got my tank cycled and set up since since the start of July (cycled with live rock, Brightwell bacteria, and live sand) and only recently added some corals into the tank (mostly LPS and soft corals). For about two weeks, the corals seemed pretty happy and would be opened for most of the day. I recently just added a hammer coral and as a beginner I'm not quite sure if this is normal 'hammer' behaviour or if I'm missing something important here. The hammer coral definitely is not as big as it was when I first purchased it at my LFS a week or so ago (I also dipped it in coral dip prior to putting it into the tank)

I also moved my hammer today from being on top of my rockwork where it was closer to the wavemaker because I mistakenly thought that hammers needed as much flow as torches. While moving it some of its polyps kind of just came off with some white stringy stuff so I'm not sure if that's an underlying issue I'm missing or whether it's because I annoyed it too much. I'm going to try to get a calcium test kit and buy additives in the next few days or so.

For context, here are my parameters tested as of today in my 20g with an AI Prime 16 with a preset schedule

Magnesium:
1080
^ I also dosed 5ml of magnesium today and am planning to dose every two days to maybe raise these levels

I'm also not sure if this would be related in any way, but I'm also going through the 'ugly stage' of reefing and I've noticed that my Xenias have stopped pulsing but are still semi open (maybe an indicator of dinos?) or maybe it's just diatoms, but I'll leave that to another thread

In the picture attached it's mostly the left side where it seems that the polyps are just drooping down and not really holding up. 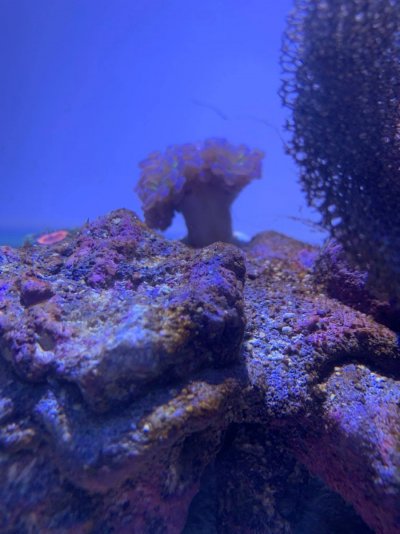 Probably just acclimating, might be flow and it's fully extending.
L

is it a wall hammer? wall hammer is not as easy as branch hammer.
OP
D

lxxnp1234 said:
is it a wall hammer? wall hammer is not as easy as branch hammer.
Click to expand...

I believe it's a branch hammer
OP
D

I would leave it in a median-low flow area for a few days.