After a year of owning a 55 gal freshwater stocked with freshwater angels, some red eyes tetras, celebese rainbowfish, and a pleco, I found myself longing for something more interesting. So I decided to jump into the world of saltwater! I really wanted a tank that I could enjoy from multiple angles, so I went with a peninsula setup!

I setup the tank, added my sand, rock (some from LFS and the rest from a local), water, and turned on the heater and marineland 360 canister filter! Welcome to my first learning: I should have setup a 20 gal long sump before filling the tank. Unless I tear down the system completely, remove the top of the stand, one won’t fit. No worries, though! I have plans to build a DIY sump out of two drilled 10 gallon 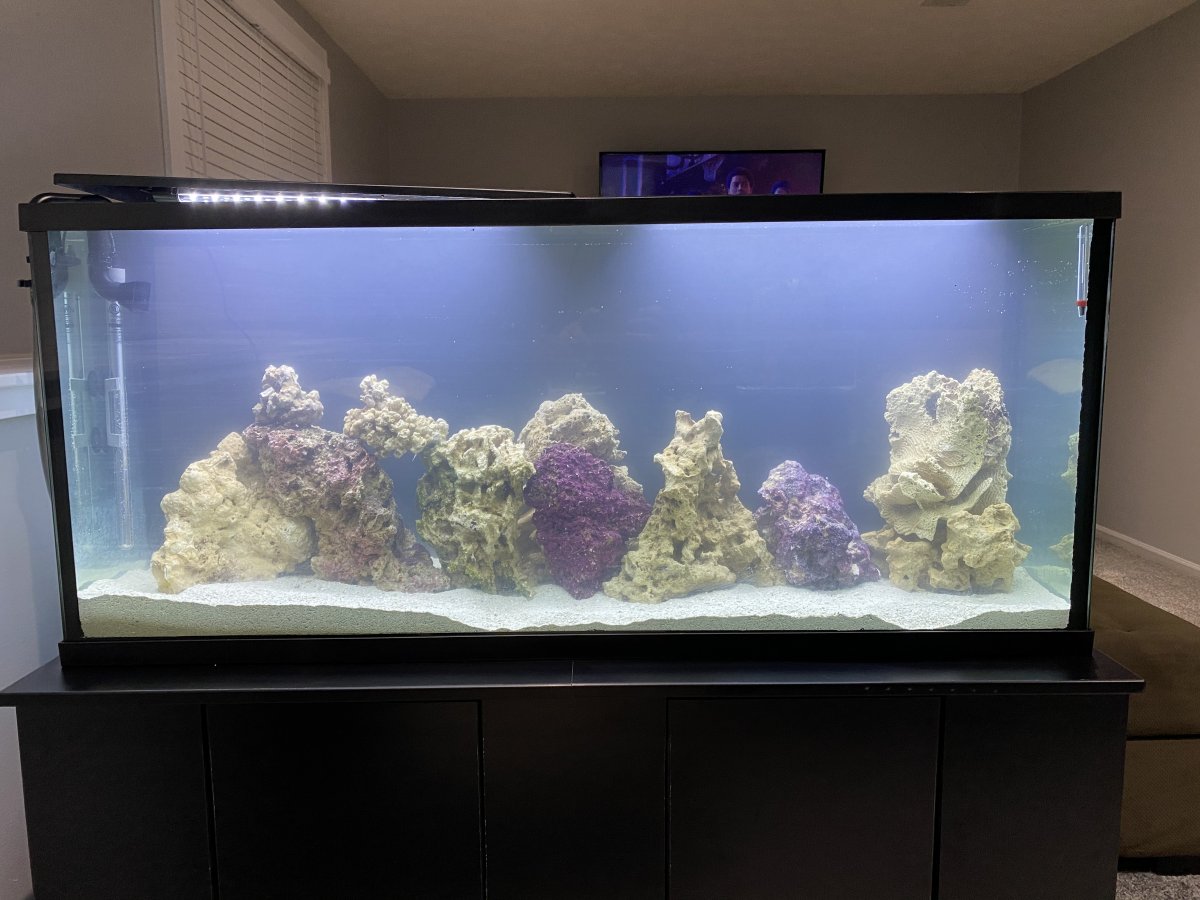 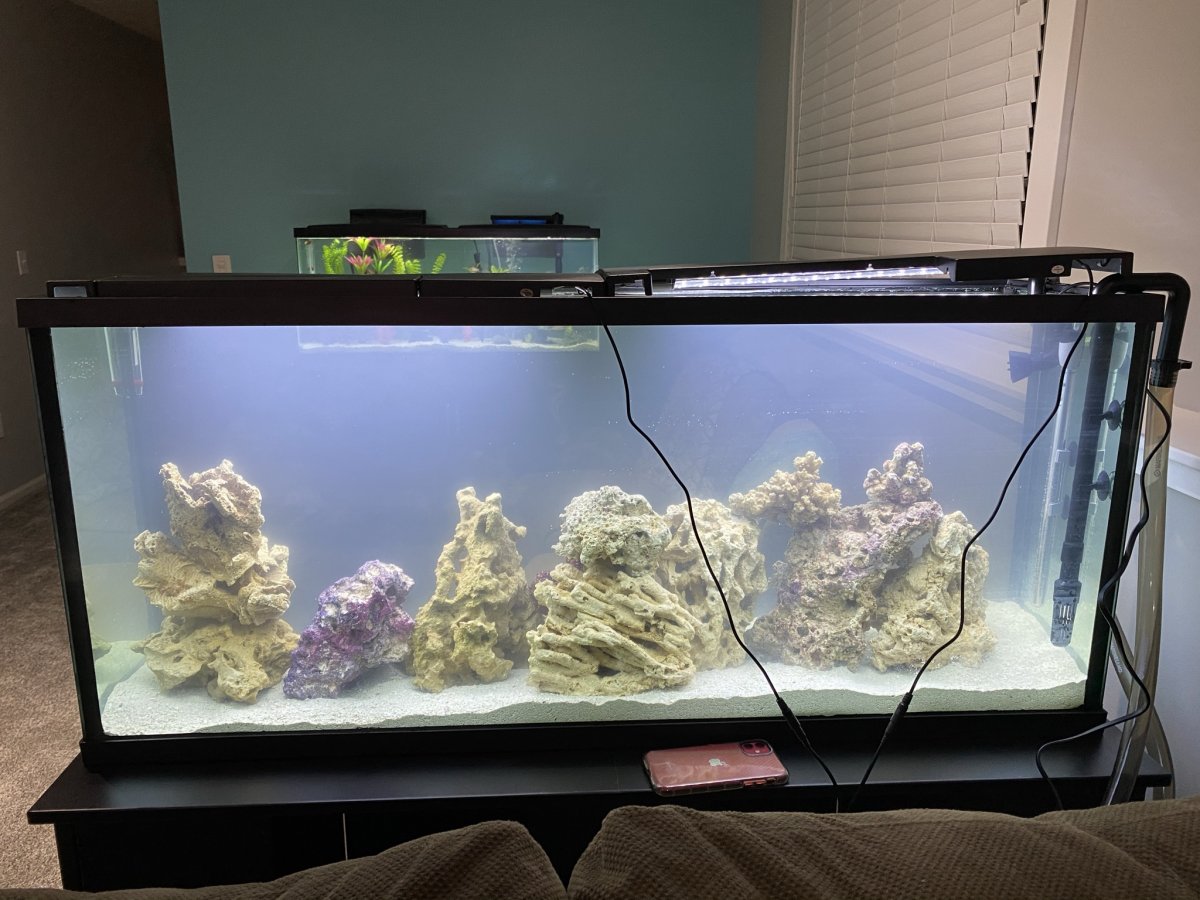 After a day or two, my water cleared up and I added two ai prime 16 had lights (ignore the light on the right in this picture, my LFS only had one at the time and I wanted to see my new tank all lit so I used a light I had from the 5 gal you see behind this! ) I’ve been running the Saxby presets and I’ve enjoyed the results so far! ince I didn’t go with a sump out of the gate, I added a HO protein skimmer. Finally, for flow I added two 6045 tunze power heads. 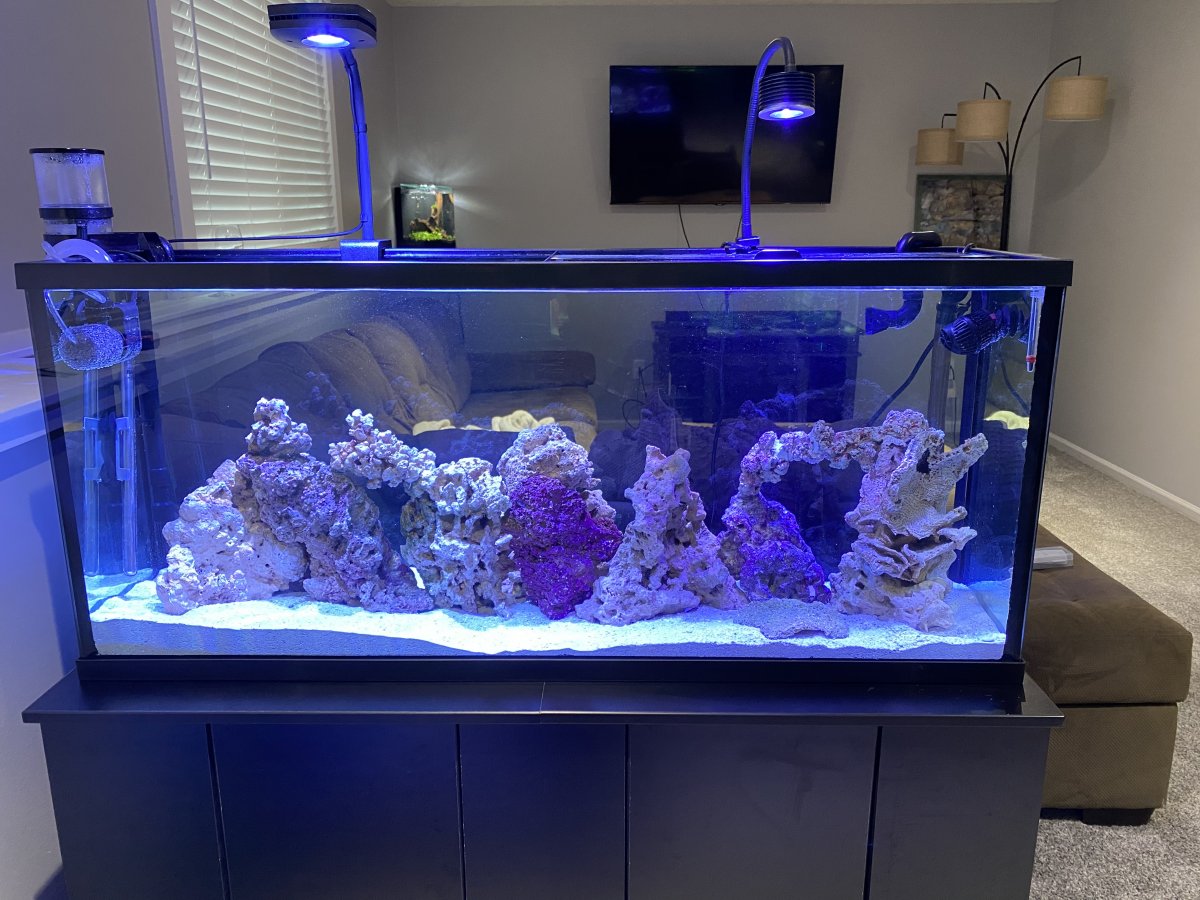 Now, I only cycled for 3 weeks. After seeing my ammonia and nitrites consistently at 0, learning the ins and outs of basic saltwater chemistry, I decided to jump in with two snow onyx clownfish and a hammer frag. I’m not the most patient man! A couple days after that, I added a Duncan frag, as well, since I have such little patience. 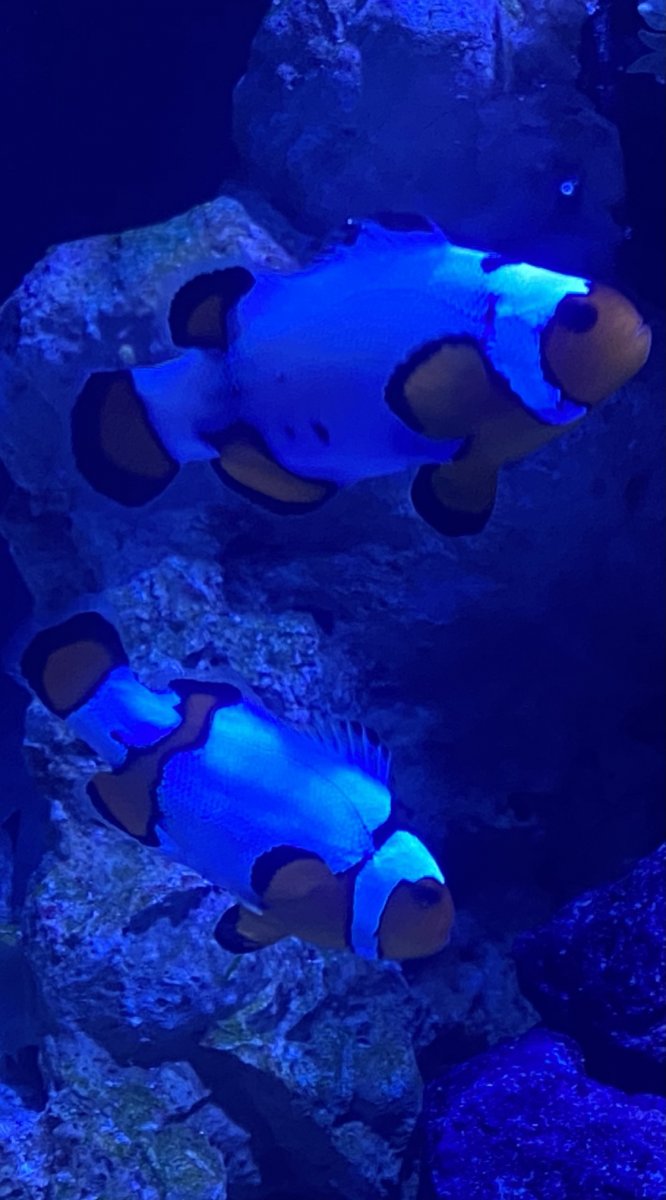 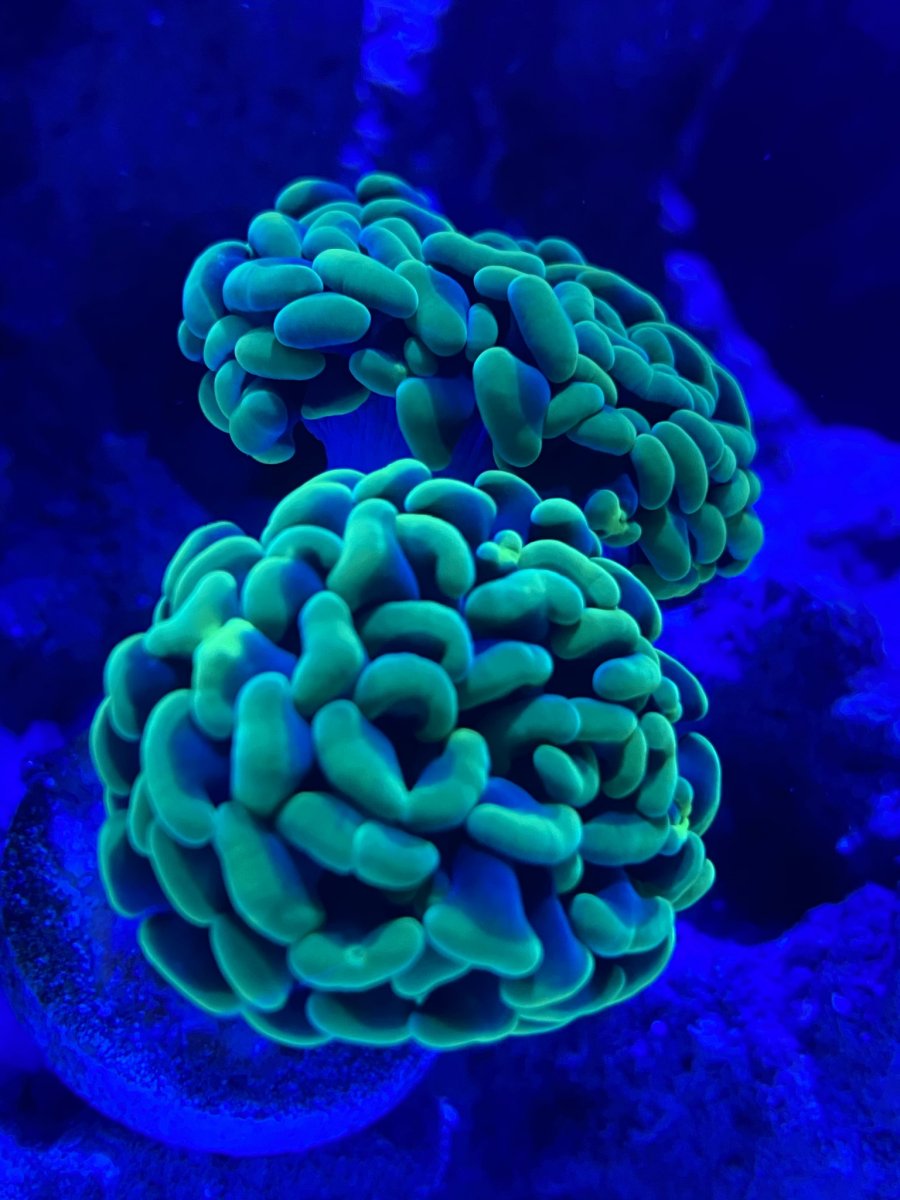 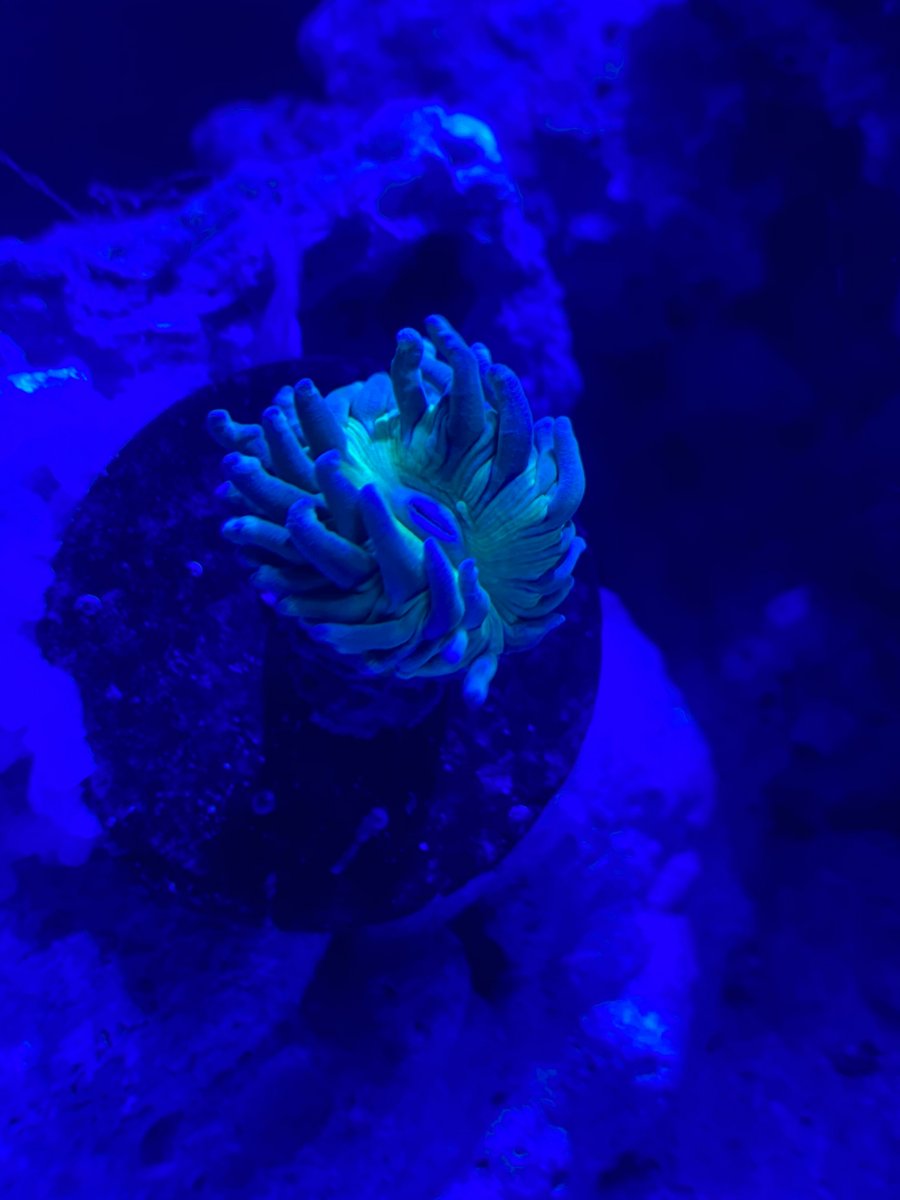 Two weeks later, I find my tank booming with bright green algae, suggested by fellow reefers to be the healthy start to coralline algae and pleasant symptoms of stability! 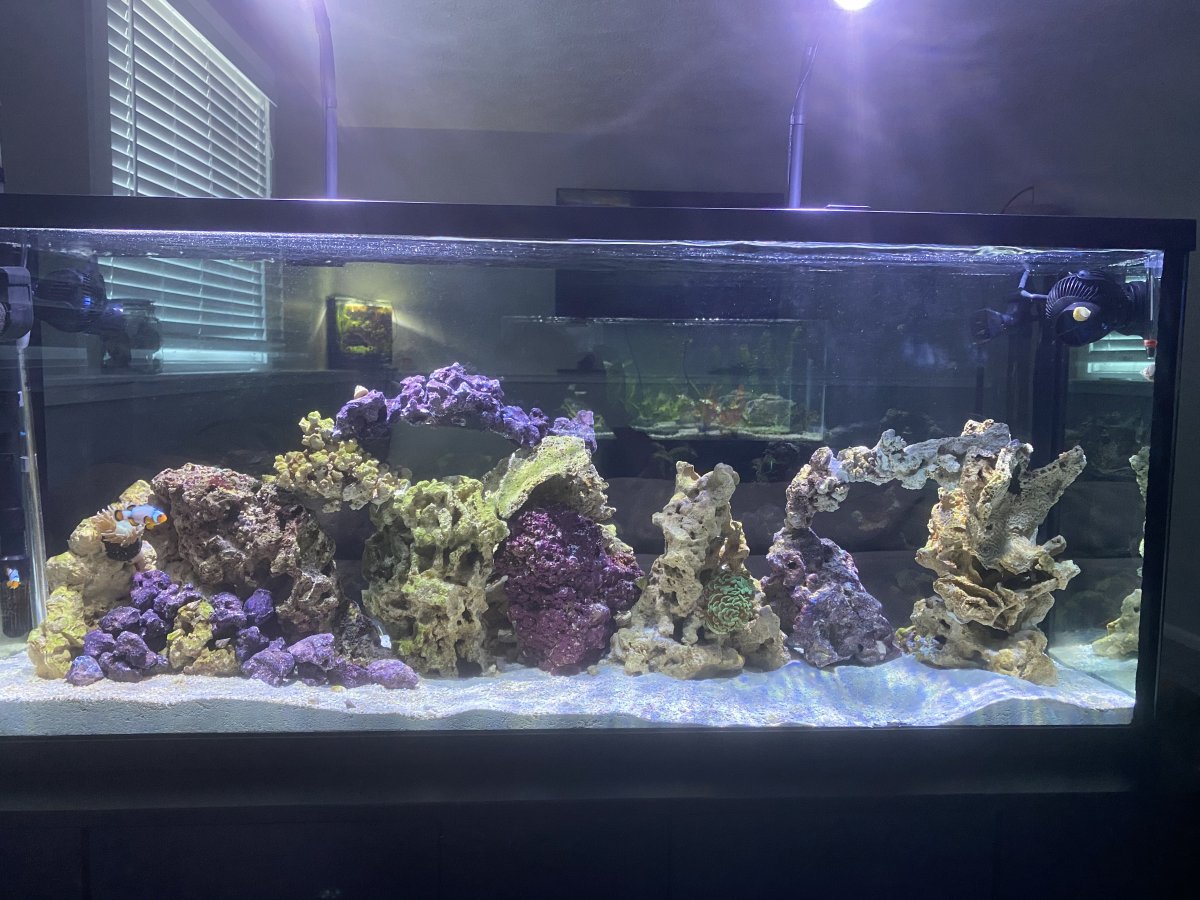 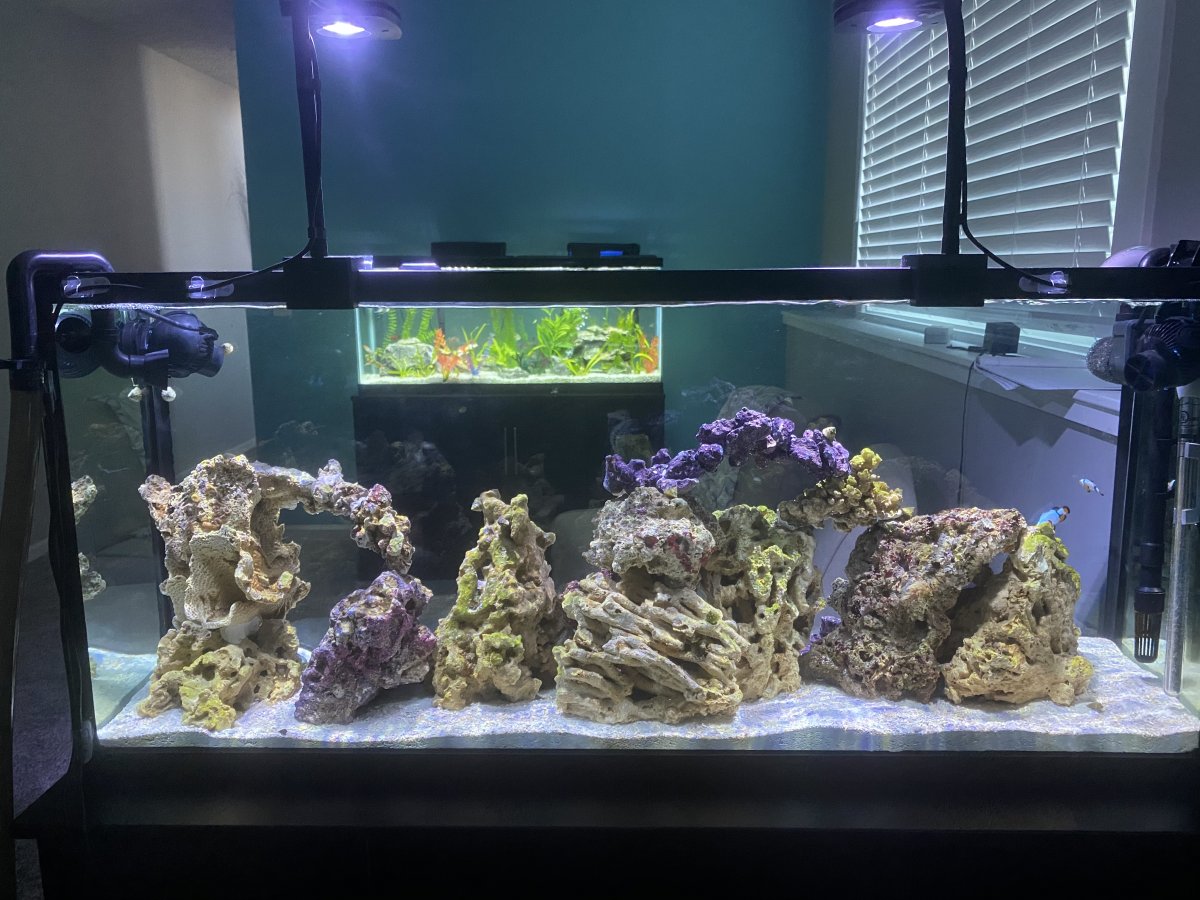 I quickly found myself tiring of having to run to my LFS for water, so my amazing husband setup a RODI system for me!Still working out some details, but here’s a glimpse so far! There’s a powerhead and heater in the storage tanks hence the cords. I plan to move to an external pump for keeping the water moving, and I’ll be adding an ATO soon so I can remove the heater as well. More on that coming soon! 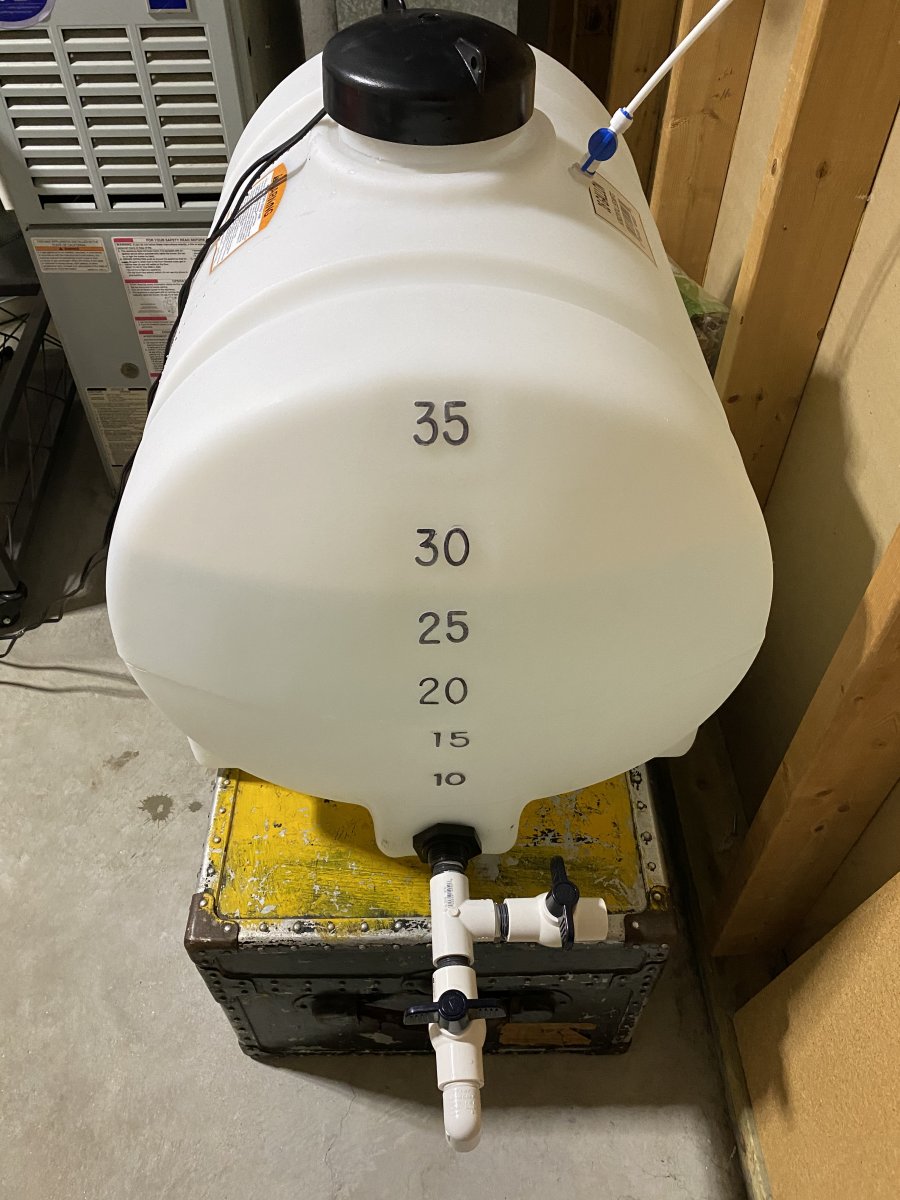 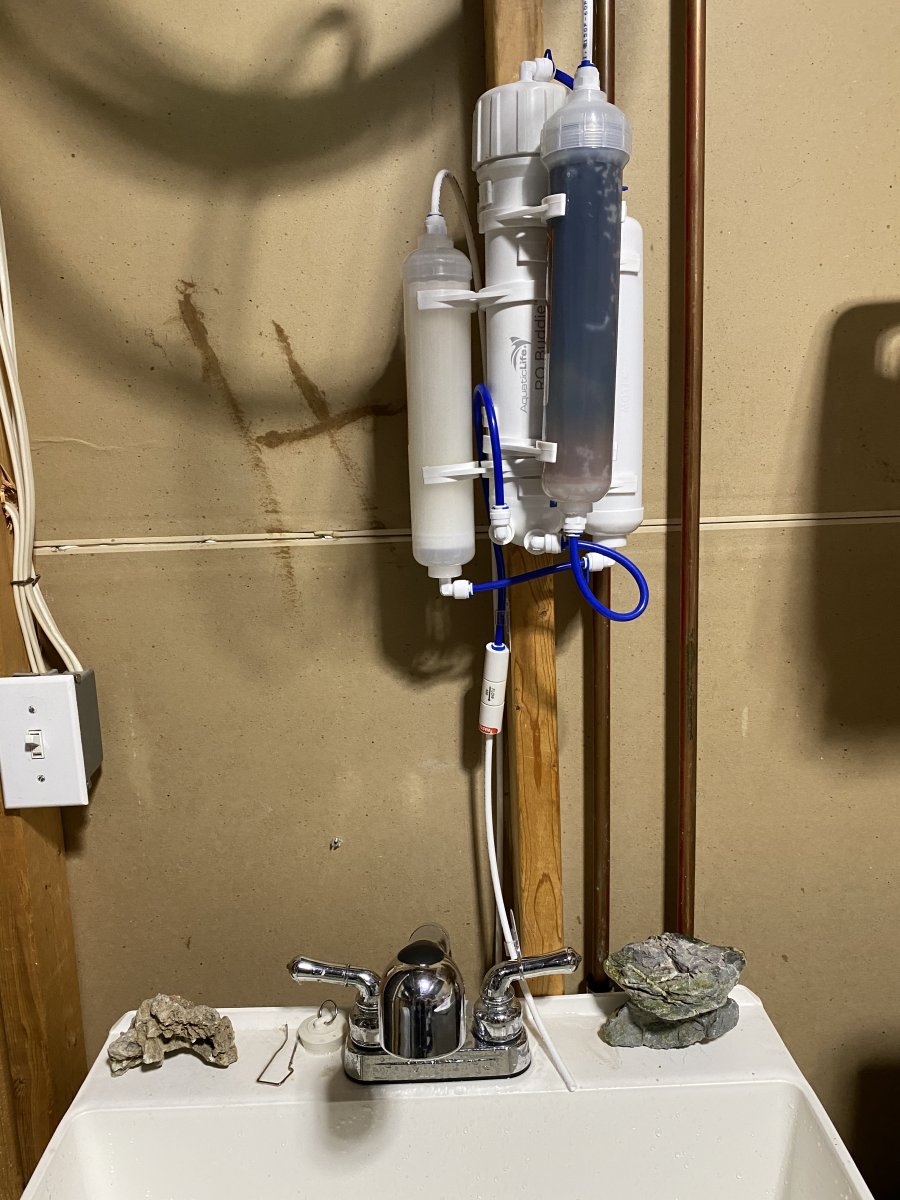 Last but not least! This weekend was my birthday, SO I decided to treat myself to one more coral frag.. which quickly turned to two. I added an anacropora and a stylophora frag! My anacropora broke during transit, but I just consider it a bonus! The anacropora had just been placed, so it’s polyps hadn’t extended yet. Updated pictures of all the happy corals to come! My hammer I have counted has at least 5 new (and very small) heads sprouting and my Duncan has 2! My husband, being supportive of my crazy hobby, bought me a 125g setup for my birthday as well! So I cannot wait to get to planning that build! 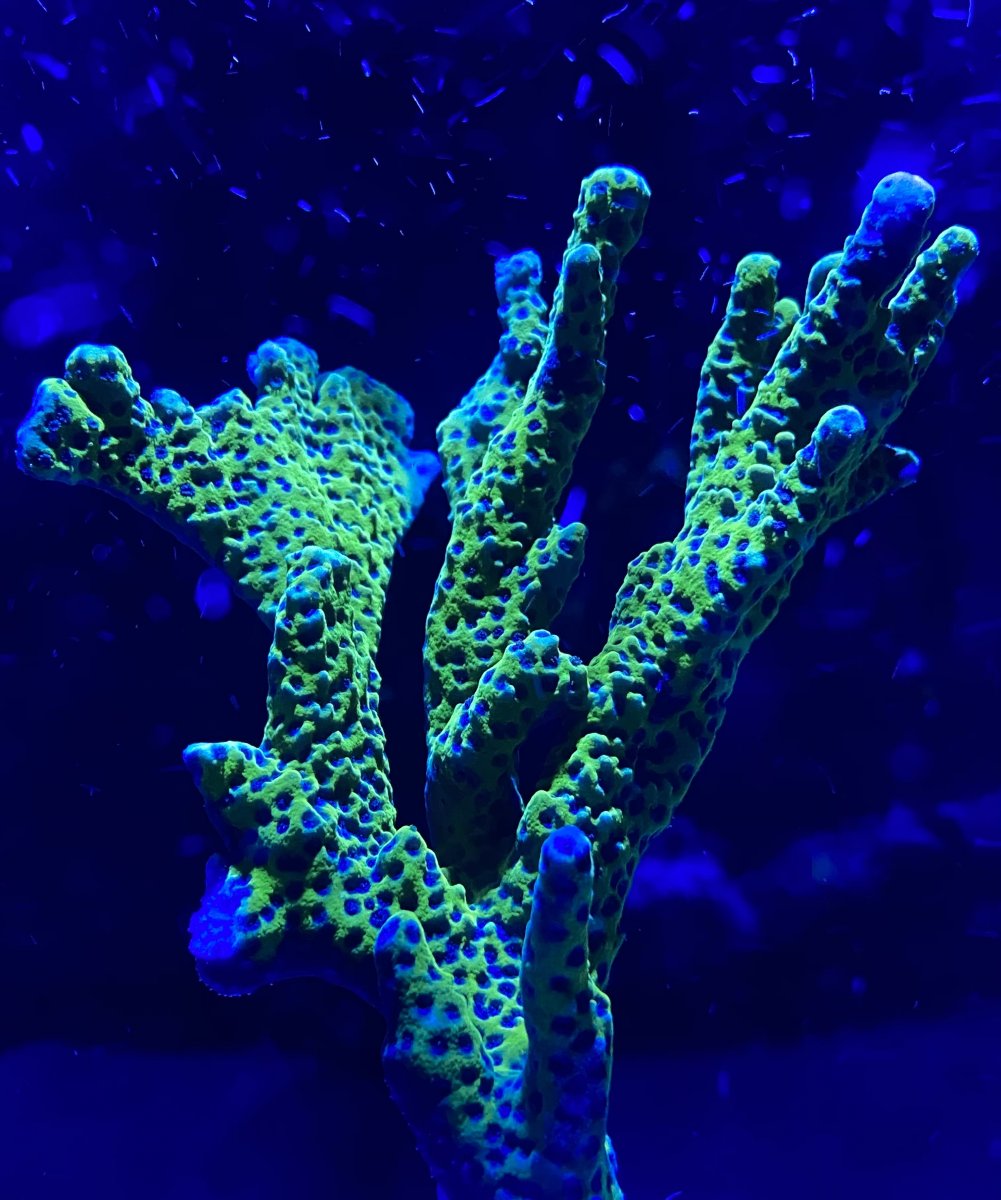 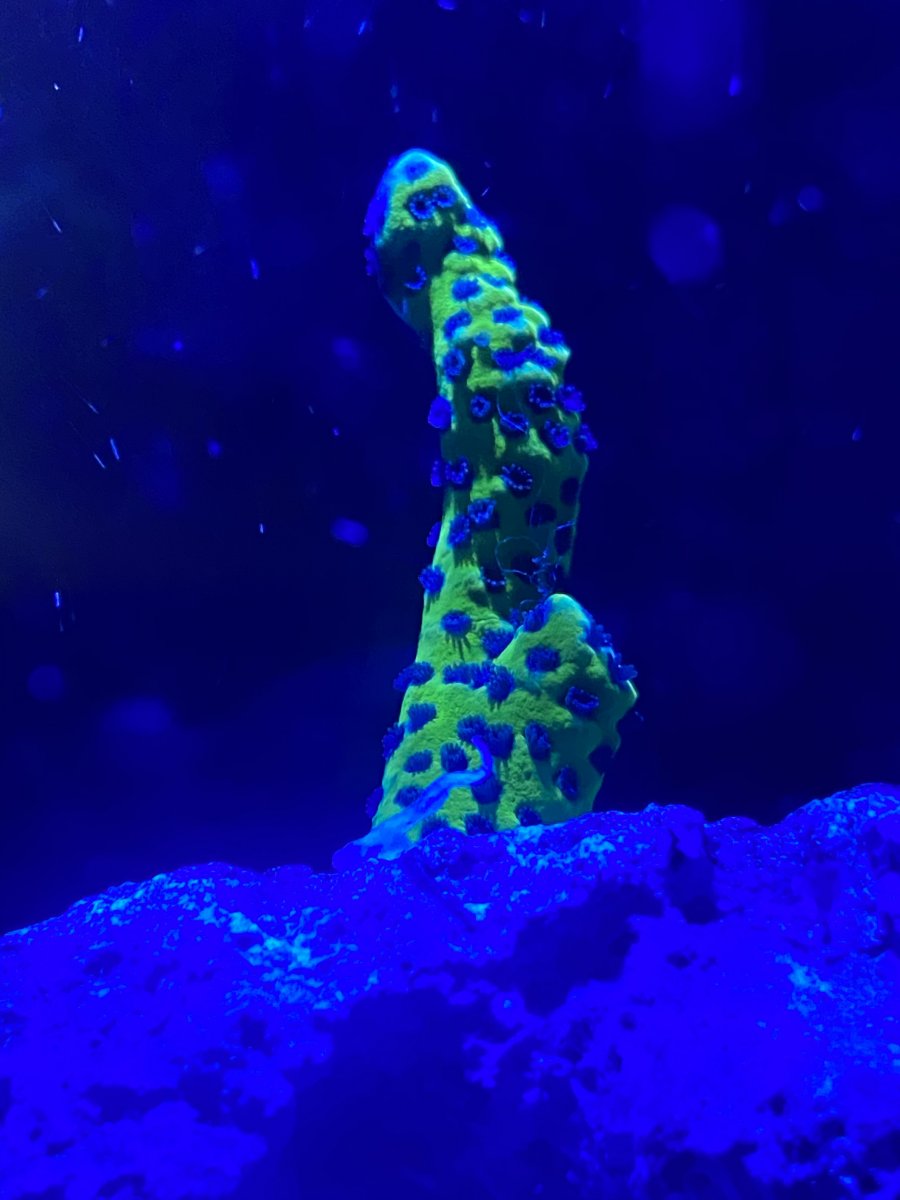 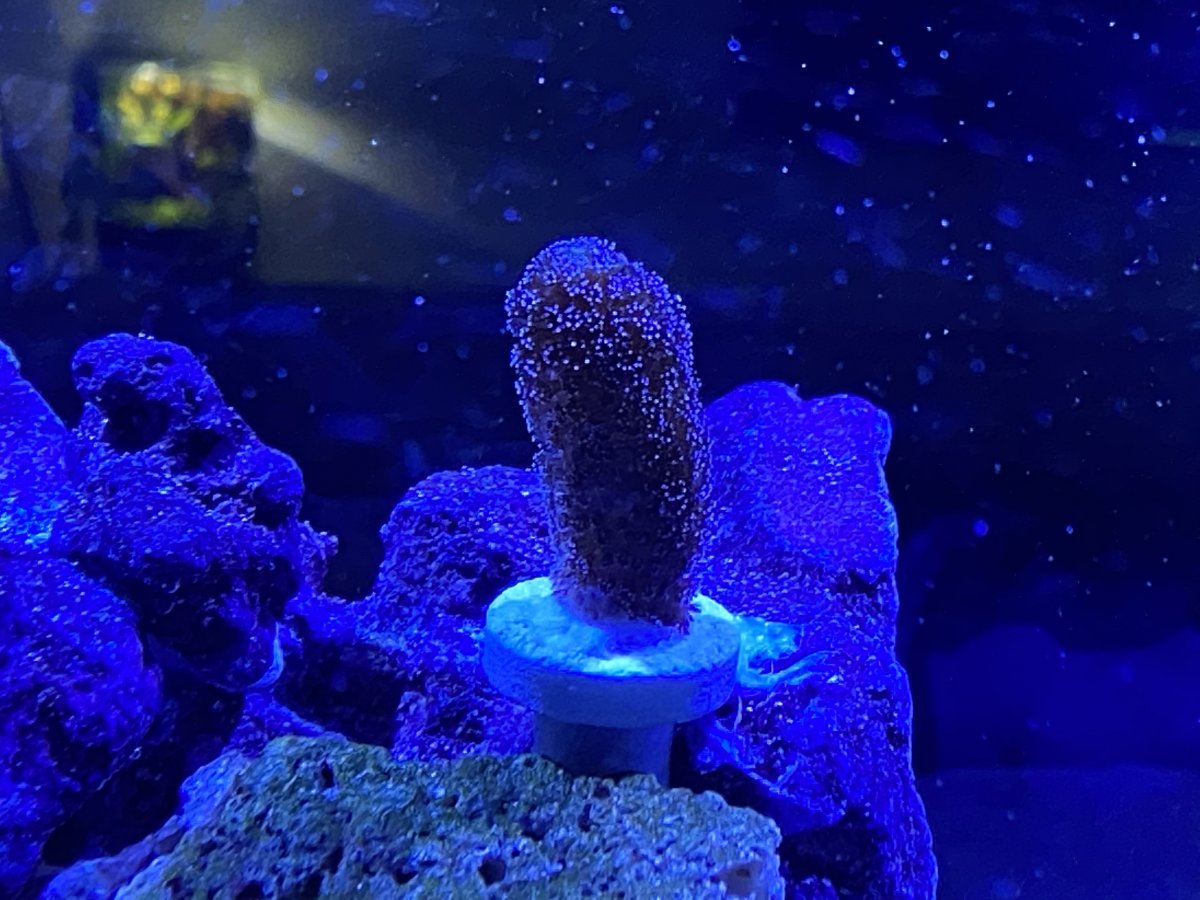 Thanks for checking me out and for all the amazing advice so far! Stay tuned for more as my first build continues and I start in on my 125g! 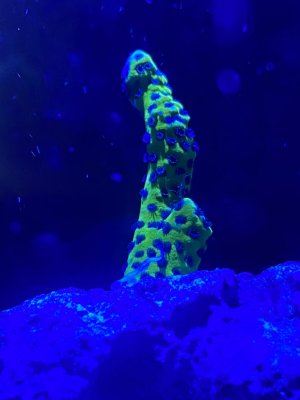 everything seems to be going very well! I had some minor dinos but nothing that couldn’t be manually removed. The system is just over two months old and I have coralline algae growth, not a single major swing in parameters, and I’ve gotten some really great growth on my corals! Added a few this weekend, finger and toadstool leathers and Kenya tree! I’ve also added an orange spotted goby and banggai cardinal, and some other corals and creatures. My 125 system is plumbed and cycling, more to come on that soon! All in all, I’m loving my time in the salty side of the hobby! 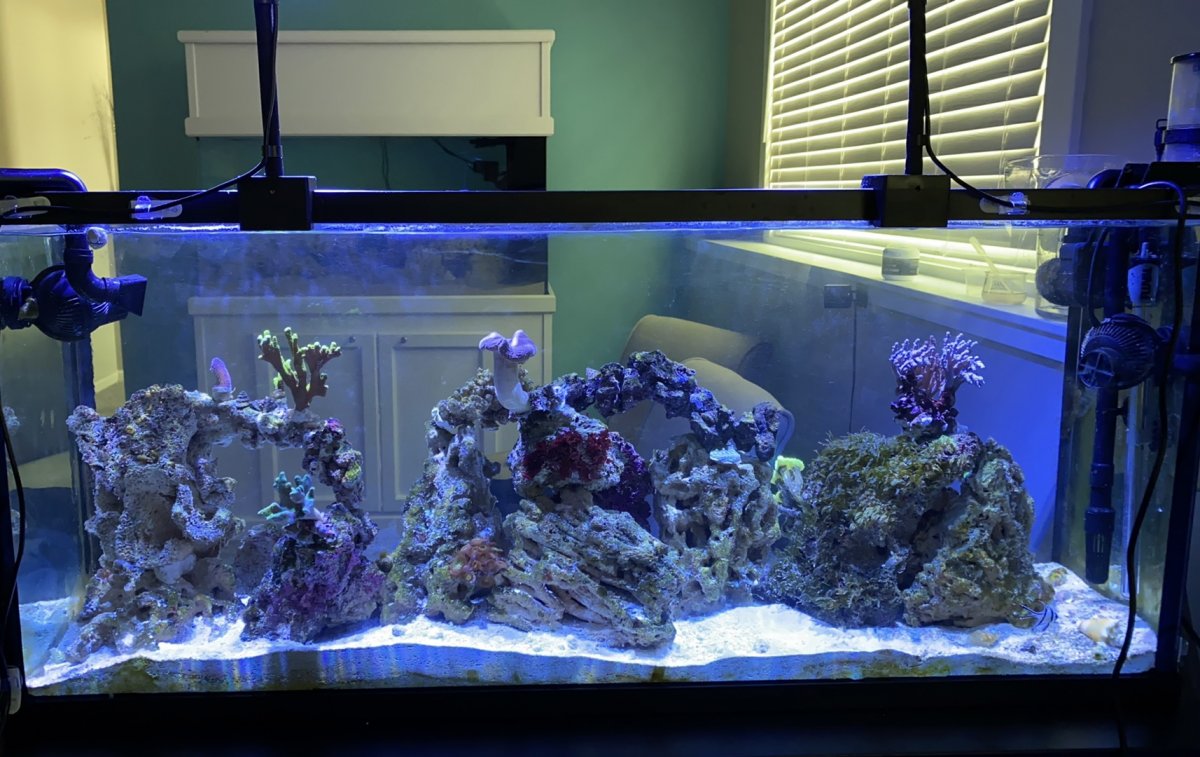 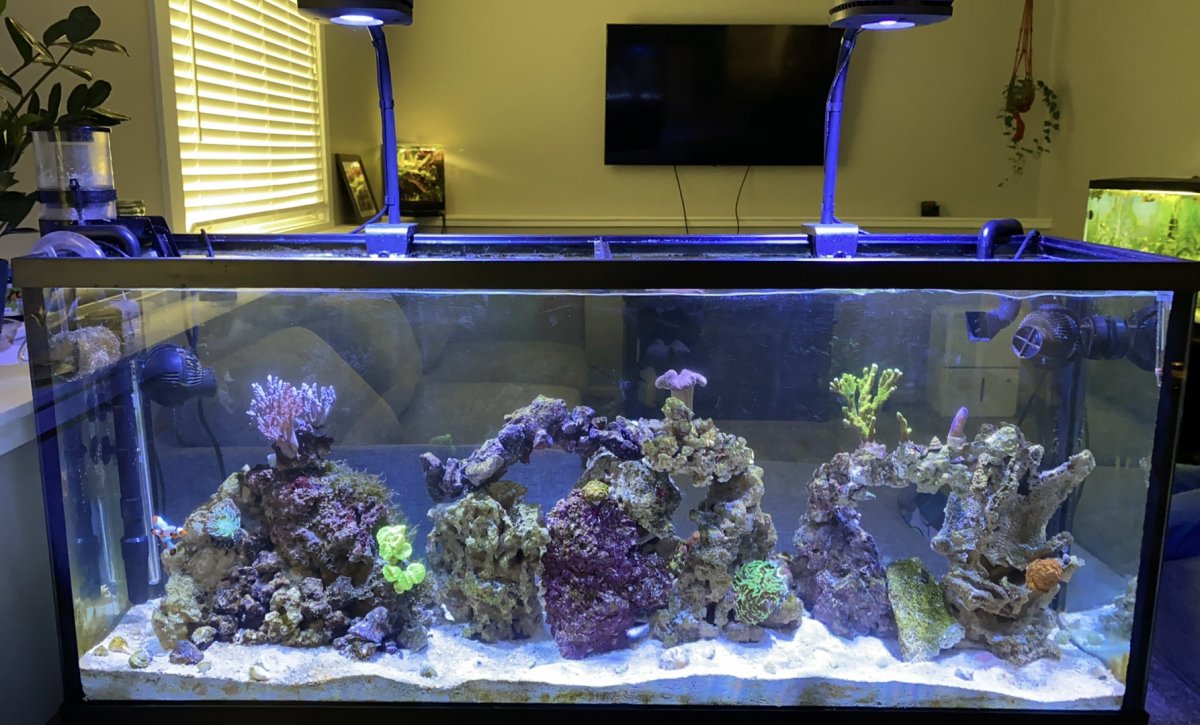 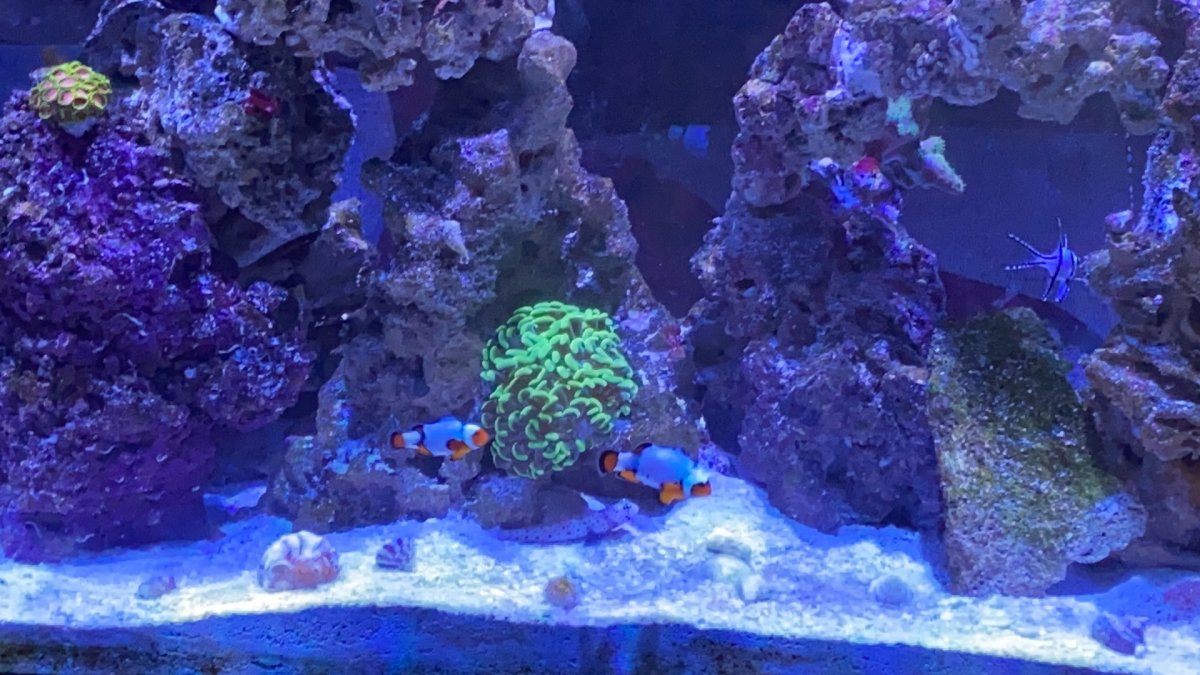 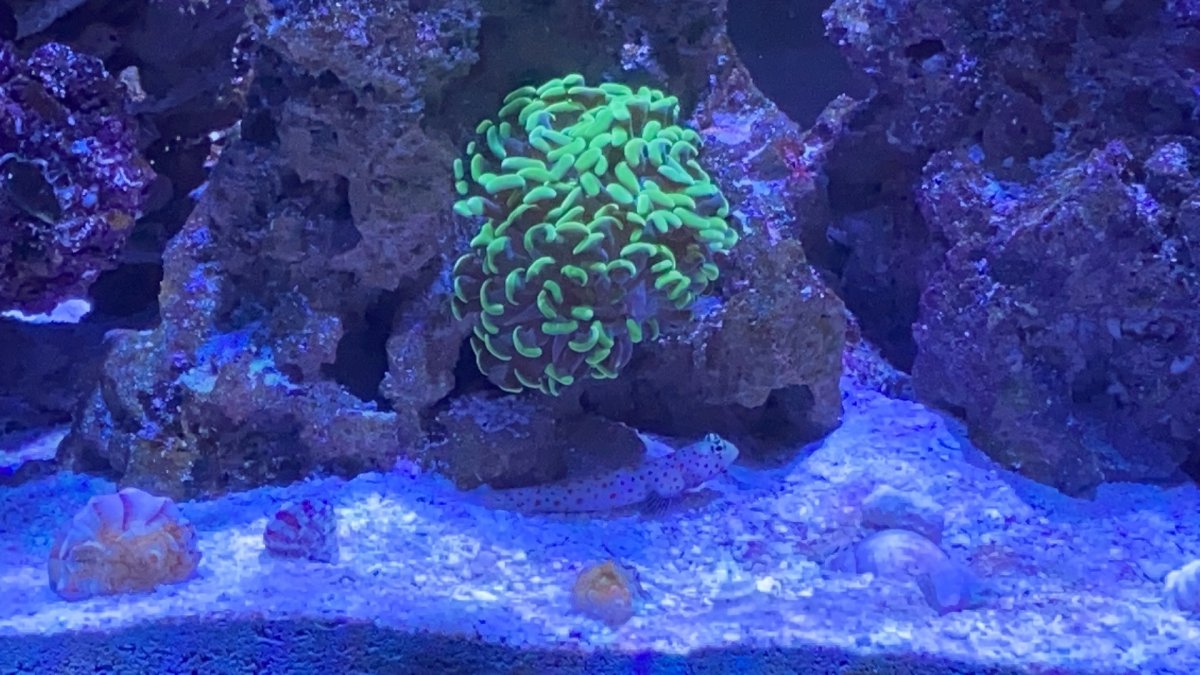 Keep on keepin on

Very nice, well on your way to your happy place