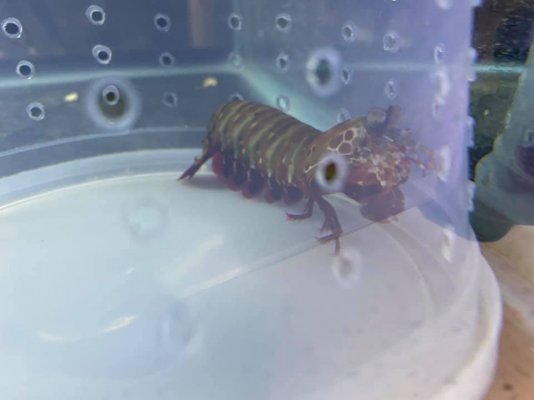 Nice! I've seen videos of feeding by hand, but I don't. I feed halved clams or uncooked shrimp with tongs. It's been a while since it popped them but it's happened. It popped me one time when I got too close. It was small and didn't hurt. It just surprised me. I chose to feed by hand since I have coral and need my clean up crew. Just needs a good dark place to hide.
S

From all my research the breaking of glass can happen but is often under special circumstances. Caldwell mentioned several specific situations, the most common being a burrowing mantis encountering glass and striking it attempting to enlarge the burrow, causing small chips and leaks.

He also discussed one particular O. scyllarus male who continually struck the same spot of glass in his tanks several times a day, and that particular male ended up breaking two different tanks in one year due to wearing down the glass. From the pictures he posted of the broken glass it appeared to be 1/4" thick, which matched the description that it was a 20g tank. Since you appear to have a good sized O. scyllarus I'd probably opt for 1/4" - 3/8" glass and monitor it to make sure it doesn't exhibit the same behavior if you don't have acrylic.

But this brings me to tank size. I don't think a 5 gallon tank is going to be a suitable long term habitat for that mantis. Something like a 2" N. curacaoensis that spends 90% of its time inside of a rock sure, but even my 3" N. wennerae is always running around and exploring his 15g tank. A medium or large O. scyllarus (5"+) I wouldn't put in anything less than a 30g tank and I'd ensure it has ample live rock, sand, and rubble.

That is a peacock mantis and I would say they need 20-30g tank. They grow large and have a decent size bioload. They are prone to shell rot and bad water quality will increase the chances of that happening. A good filtration system or skimmer will help.

They are also very active when settled and keeping one in a 5g would not only be more boring for you but also not nice to this intelligent animal. They want space to build caves and explore.

The tank doesn’t need to be acrylic but cutting a thin acrylic sheet and putting it inside the tank on the bottom and then placing sand over it will prevent them from punching the glass directly when they are digging tunnels.

So what I have learned from watching him/her is that they are really really shy and would rather swim away(super fast) then bash with their smasher arms.
OP

Also I will be going to a elongated 30 gallon tank after next year's tax return. Odd that I only spend them on pets, so I will be using it to give him more space. I can convert the 5 gallon tank to a clown tank or micro anemone tank for rock anemones later on.

They will be shy for several days. Also if they are small, this is more so the case. It took my peacock about 2-3 days before she was comfortable being out in the open but she was fully grown when I picked her up.

The elongated 30 will do just fine. The glass-breaking thing is overblown as mentioned above unless you have a peacock, G. chiragra, O japonicus, or other large smasher in a small tank. It isn't the sides of the tank you should be concerned with but the bottom panel. They will hit the bottom repeatedly when constructing a burrow as they think it is just more rock to smash through. Some put a piece of acrylic on the bottom if they are super worried. 5 gallon with a full sized peacock is not a good idea though.

How to setup a peacock mantis shrimp tank