Hey R2R, happy Friday and hope everybody is staying safe out there.

Long story short I moved a few months ago and the subsequent rebuilding of my tank has rejuvenated my passion for the hobby, so I've decided to try my hand at something I'd wanted to do from the beginning- build a Mantis Shrimp Tank! I haven't picked a resident out yet but seems like O. Scyllarus, N. Wennerae, and G. Smithii are the preferred options, frankly I'd be fine with any of them but also open to suggestions. In terms of sourcing the two LFS near me seem to be able to get them relatively easily which seems safer than shipping, but also open to suggestions there. Hoping some of you knowledgeable Stomatopod-enthusiasts can offer thoughts/critiques while I'm still in the set-up phase, thanks in advance! 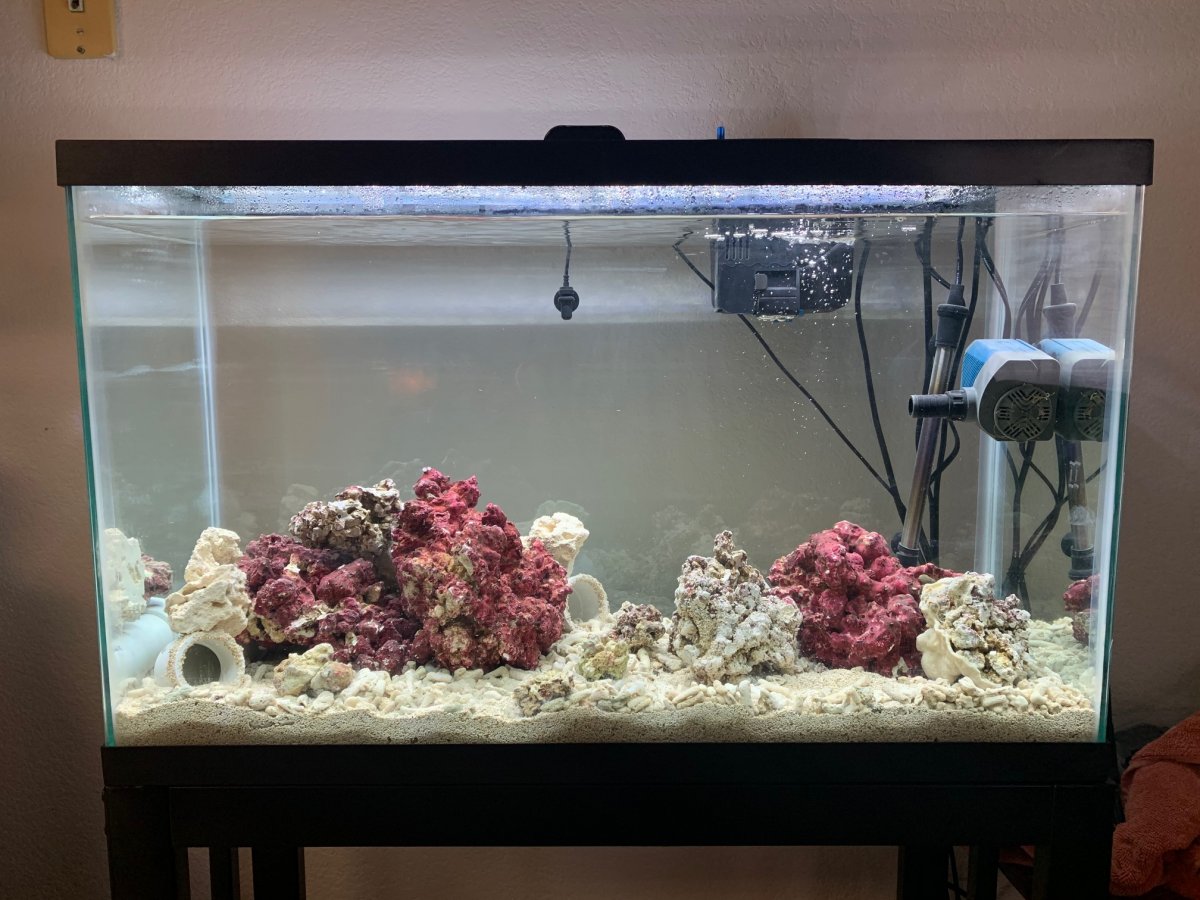 Tank:
I picked up a 29gal Aqueon tank from Petco during their $1/gal sale as that seemed to be an acceptable size for most species (30"x12"x20"). After having a minor panic attack reading reviews of people who sustained house-crippling damage from broken panes I've already considered upgrading to something more "sturdy" in which case a size change is also an option, but with how many tanks they sell I'm hoping that's a very small chance. It's been full a few days now and so far so good, bought some WiFi leak detectors just in case and keeping my fingers crossed/knocking on all the wood I can find! In terms of location it is in our Kitchen/Living Room combo where we spend much of our time, I'm a little concerned about sensitivity to sound/light from the TV etc. but I have been told that it shouldn't be an issue- hopefully that's true?

Rock/Substrate:
I put together a 1.5" PVC "lair" that I'm hoping will eliminate the need for a DSB and hopefully avoid any potential "dig-punching" of the bottom pane. It is roughly 14"x10" which I'm hoping is big enough without being too large? Beyond that there's 1.5" or so of sand and then a layer of crushed coral/shells on top of that and some smaller pieces of rock for "doors". There's about 20lbs of real rock in there, 13lbs of which are 3 larger "live" pieces from my LFS. The other few lbs are some left over rocks from moving my existing tank that I cured and then let sit in the sump for a few days, and then some extra "frag mounts" to fill in gaps as needed. So far so good on cycling, I really have no idea how best to aquascape for one of these guys though so any tips are appreciated! 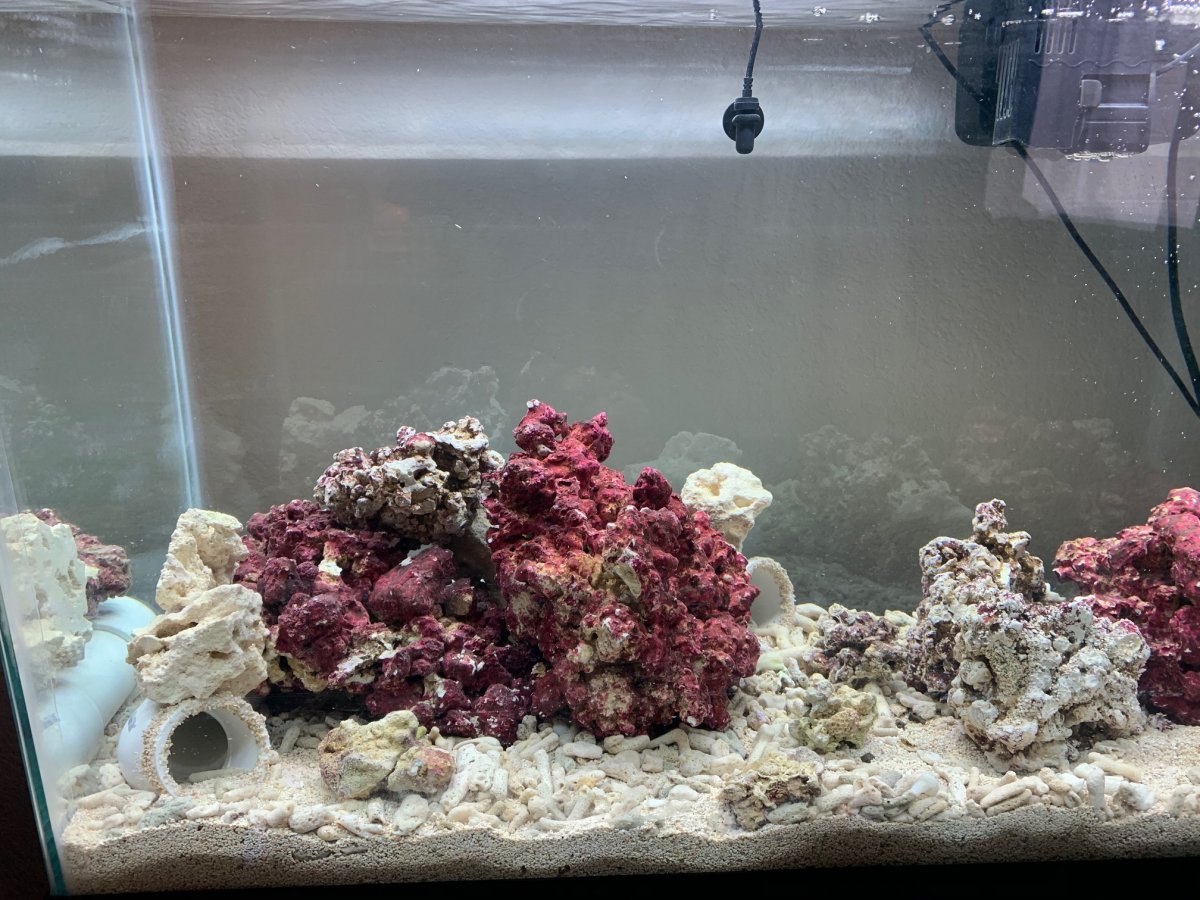 Lighting:
My understanding is light is basically aesthetic and too much can be damaging so I just went with an Aqueon OptiBright Plus 34" LED that puts out something like 15 PAR @ 12" and has RGB options. It fits and lights the the tank up well enough, the color cycles are fun while it's emtpy... shrug.

Flow:
I have a Voyager Sicce Nano 530 GPH arriving today to provide flow, again my understanding is it's not particularly relevant to the Mantis itself and I have no plans to put coral in there but I generally believe in good flow for keeping things "healthy". That said if it's too much I can drop down into the 200-300 GPH range and use it as a mixing pump (my current mixing pump is in there now). 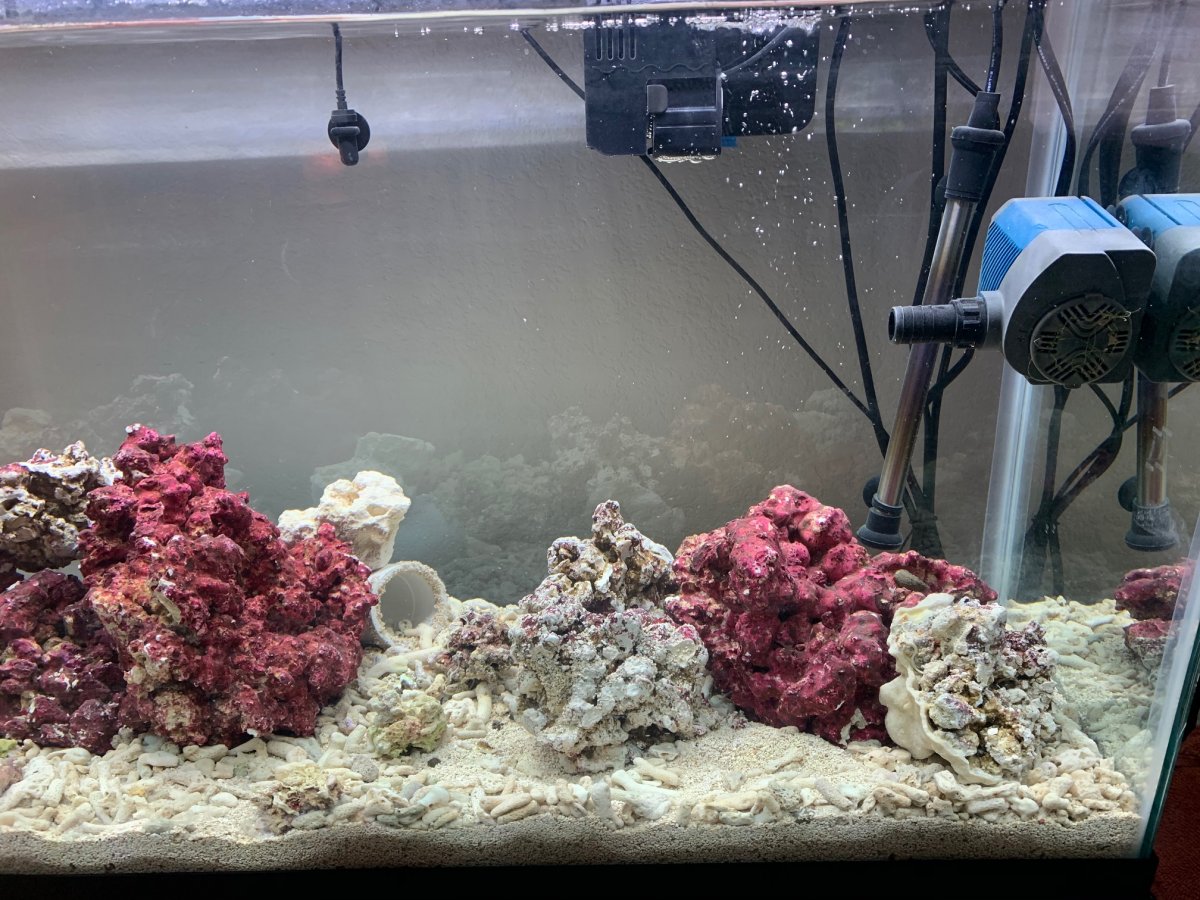 Filtration:
I went with a Tidal 35 for no particular reason, I have no experience with HOB's. I do weekly water changes on my main tank already so those can be done weekly or bi-weekly as needed. I would definitely be open to keeping some kind of lower-light Macro in there too, originally I wanted to include a couple red mangroves but it sounds like they generally need more light than this tank would probably provide them (I also currently have a glass lid to reduce evaporation and any potential escape attempts).

Heating:
I went with a 75W Eheim JAGER Heater arriving today, again for no particular reason. Hoping that will be enough as I prefer the size vs. the 100w, I have my 200w "mixing" heater in there now from the initial fill and it's definitely too much. 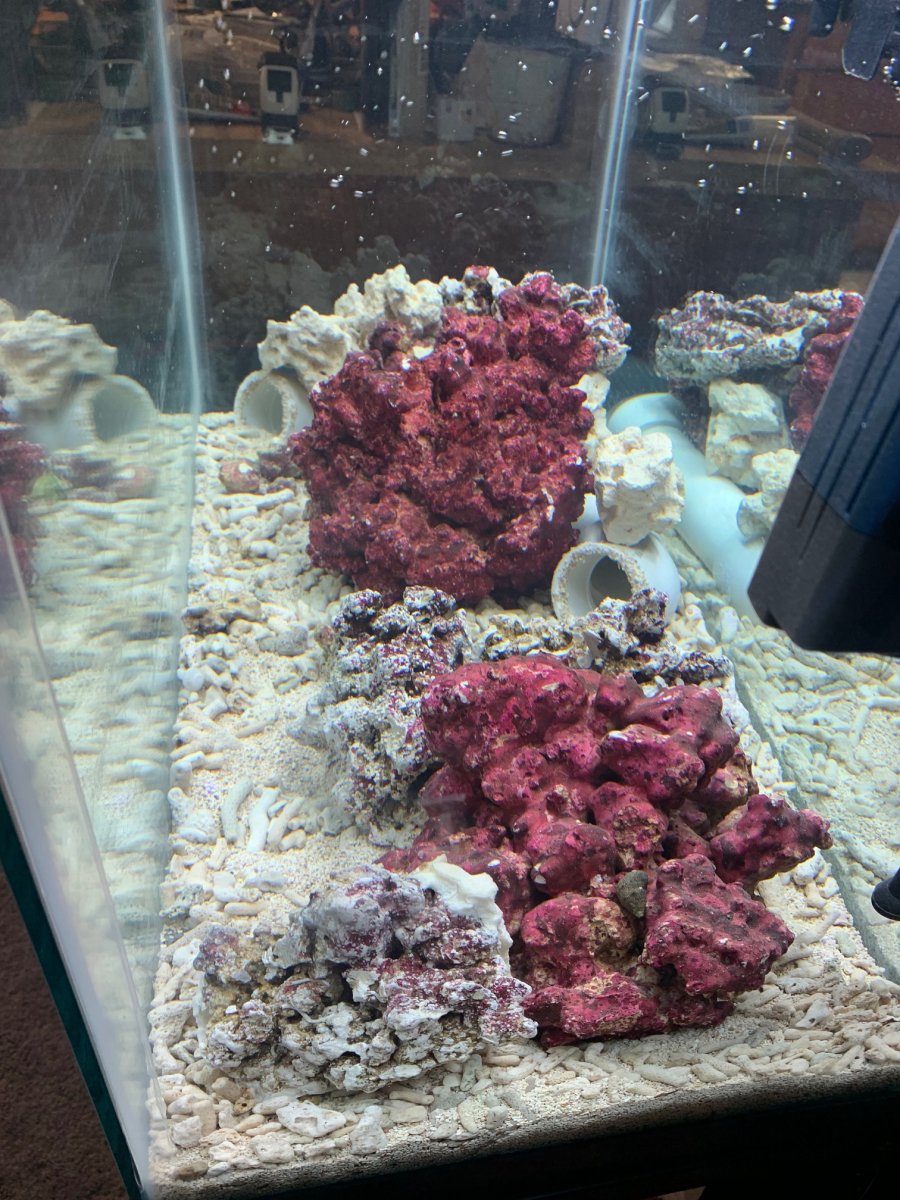 So there's the set-up so far, any comments/critiques greatly appreciated! As I said I'm open to changing pretty much anything as needed. Main thing I'm currently regretting is not laying down a bottom pane of acrylic and may still do that, especially if the PVC lair isn't much of a guarantee there won't be any dig-punching. Otherwise the plan is to let it chill for a bit and confirm it's stable - both physically and chemically - and then begin the search for a resident!

Thanks as always and take care!
-DT

We used to have one and were told to keep it in an acrylic tank as they are capable of shattering glass? When we first got it, it would hammer the tank, maybe a reflection?
OP

Daddy-o said:
We used to have one and were told to keep it in an acrylic tank as they are capable of shattering glass? When we first got it, it would hammer the tank, maybe a reflection?
Click to expand...

Thanks for your response! Curious how large the mantis you had was compared to the tank it was in? Acrylic definitely seems the safest route overall, but in researching it sounds like glass should be ok if: the tank is large enough, they don't have to punch-dig a burrow, and/or they aren't both large and repeatedly aggressive with the same area of glass as you describe. I'm hoping 30" is big enough for one not to feel cramped and the pvc is to hopefully avoid any need to burrow. If I got one that was aggressive towards the glass anyway I have acrylic I can put over a certain area to avoid chipping, but would probably just return it to the LFS. If I got second that did the same then I'd move on to housing something else in this one I suppose.
S

Hello. Love to see a mantis build. I'll address a few of your points to the best of my ability with my experience (only a few months so far) and what I've found in research.

1) Glass vs Acrylic and cracking. You and I appear to have read a lot of the same material by Caldwell where he discusses bottom panes being chipped due to a burrow mantis trying to dig through it. I also dug up an old post of his where he shows two broken tanks causes by a 5" Peacock over a one year timeframe. This Peacock apparently would strike the same spot in the glass dozens of times per day, every day. The tanks were 20g and appeared to be 1/4" glass, for what that's worth. Now with my wennerae I have yet to see him burrow down to the bottom glass (I can look from bottom up) however I have watched him get bored one day and smack the glass probably 30 times in the same spot. It only really happened that one day but he did it, everything is fine still so who knows? I have 1/4" glass on a 15g.

2) Sand, rock, aquascaping, and burrows. I don't use a PVC tube with my wennerae, that's just me, you're mileage may vary. He just built a burrow in some section of LR where two pieces meet. I think he has an entrance underneath one piece that goes through the sand into another piece. My sandbed is a mix of grain sizes from a very fine aragonite to basically crushed coral size. The mantis absolutely loves wandering around grabbing pebbles and bits all day to bring back to the burrow. There's some rubble chunks in there as well ranging in size from 1/2" - 2". Your sandbed shows plenty of rubble and bits so that looks good.

3) Lighting. High intensity lighting is really only an issue with the Peacock. Smithii and wennerae don't struggle with shell rot. So your species choice will dictate the lighting options.

4) Flow and filtration. Yours sounds fine. It's not a big deal unless keeping a peacock and you need very good water quality to help prevent shell rot.

5) Heater. I went with titanium. Caldwell described a lot of heater breaks he witnessed over the years. I decided I didn't want to take the chance as heaters are thin glass. Your mileage may vary.

Overall I think you're well on your way to having a cool mantis friend. I'm excited to see what you go with. I hope this helps.
OP

Steve Erekson said:
Hello. Love to see a mantis build. I'll address a few of your points to the best of my ability with my experience (only a few months so far) and what I've found in research.
Click to expand...

Thanks very much Steve, definitely read your thread while putting this together and appreciate the input- and the mysterious clicker still has me intrigued!

It does seem like Peacocks tend to be the ones that have issues in general which is too bad. My goal was to be able to have one if I came across a looker that wasn't huge but a wennerae or smithii sounds more "beginner-friendly". Couple questions if you don't mind:

Ever end up trying those mangroves or did you stick with keeping half of the tank "open", and if so does it use that area much? I figured some rock to break up sight lines and add temporary shelter if frightened would encourage "constitutionals" around the whole space.

What do you use to control temp on your Ti heater? I have several "dumb" ones since my main tank is on Apex so could definitely swap one if needed. My LFS uses these eheims on everything and probably put too much faith in the "unbreakable lab glass" claim lol. It does tuck nicely in the corner and the "red light" is pretty out of the way so hoping it wouldn't be a target. 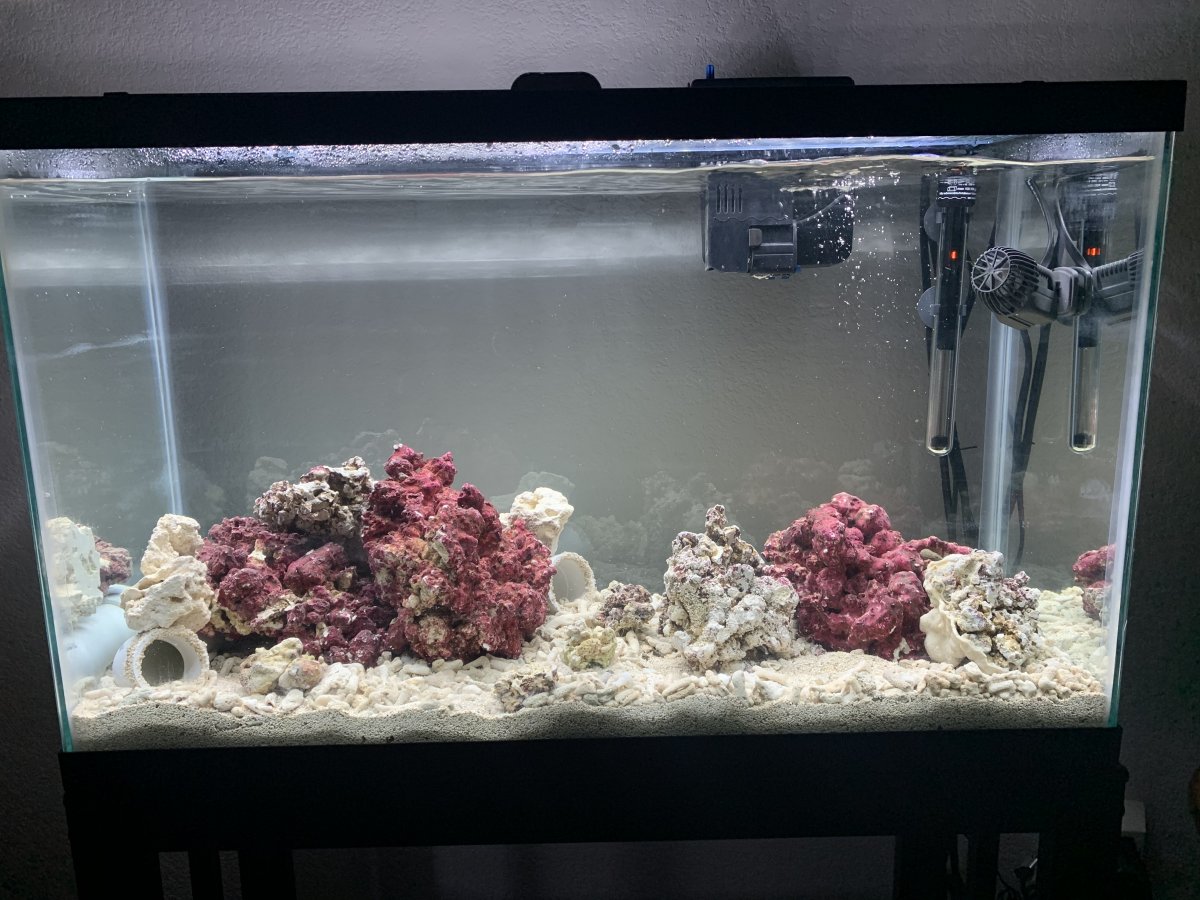 Thanks again for your help!

No mangroves yet. No anything yet really. And nah the rock is way more spread out now so there isn't a whole lot of open space. That's probably for the best as the mantis does appear to like to hug the rock when it moves around so I'd encourage more LR surface area, so to speak.

For the heater I'm using a Finnex which has an analog controller built in. If you have the titanium type without the controller I suppose an Inkbird or a Ranco would be good options. I use a Ranco ETC on my 20g mixed reef.
OP

Steve Erekson said:
No mangroves yet. No anything yet really. And nah the rock is way more spread out now so there isn't a whole lot of open space. That's probably for the best as the mantis does appear to like to hug the rock when it moves around so I'd encourage more LR surface area, so to speak.

For the heater I'm using a Finnex which has an analog controller built in. If you have the titanium type without the controller I suppose an Inkbird or a Ranco would be good options. I use a Ranco ETC on my 20g mixed reef.
Click to expand...

Awesome, thanks again for the input! Cycle seems to be stable already so hopefully I'll have a resident and some findings of my own soon

Ended up swapping the white 1.5" PVC for 2" black, from research sounds like it should be big enough for a Peacock but opinions appreciated! 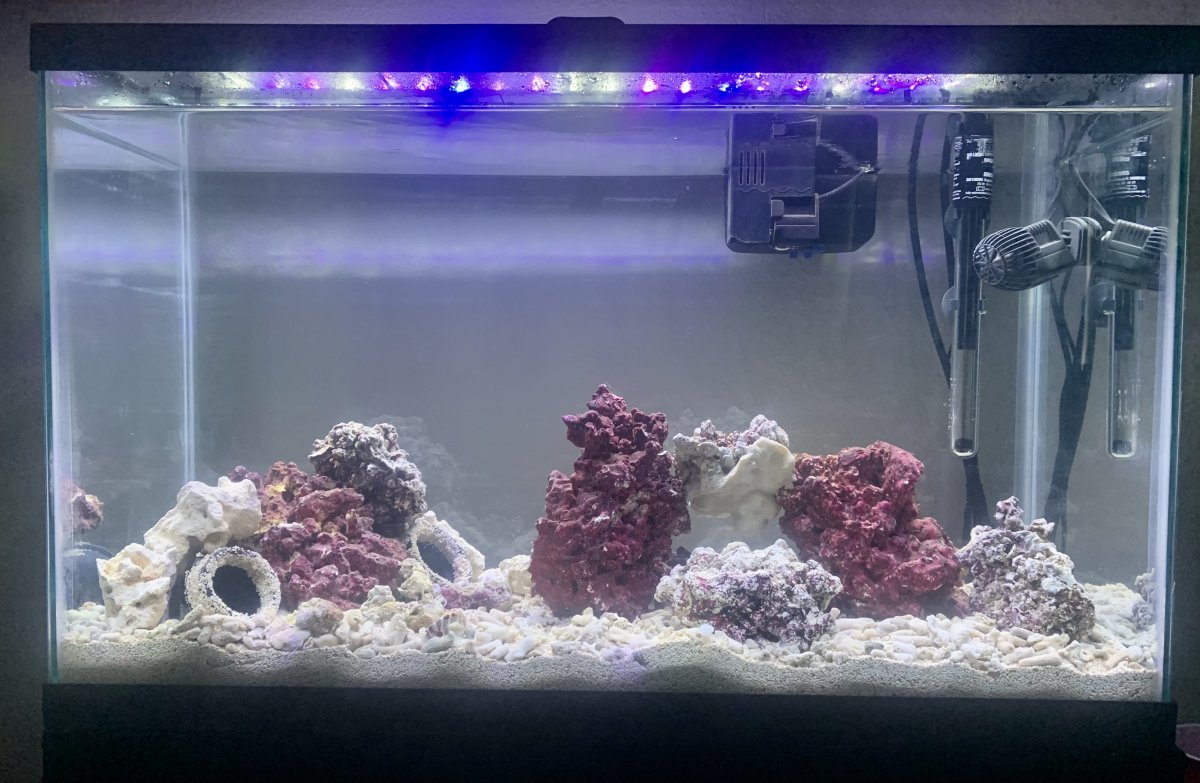 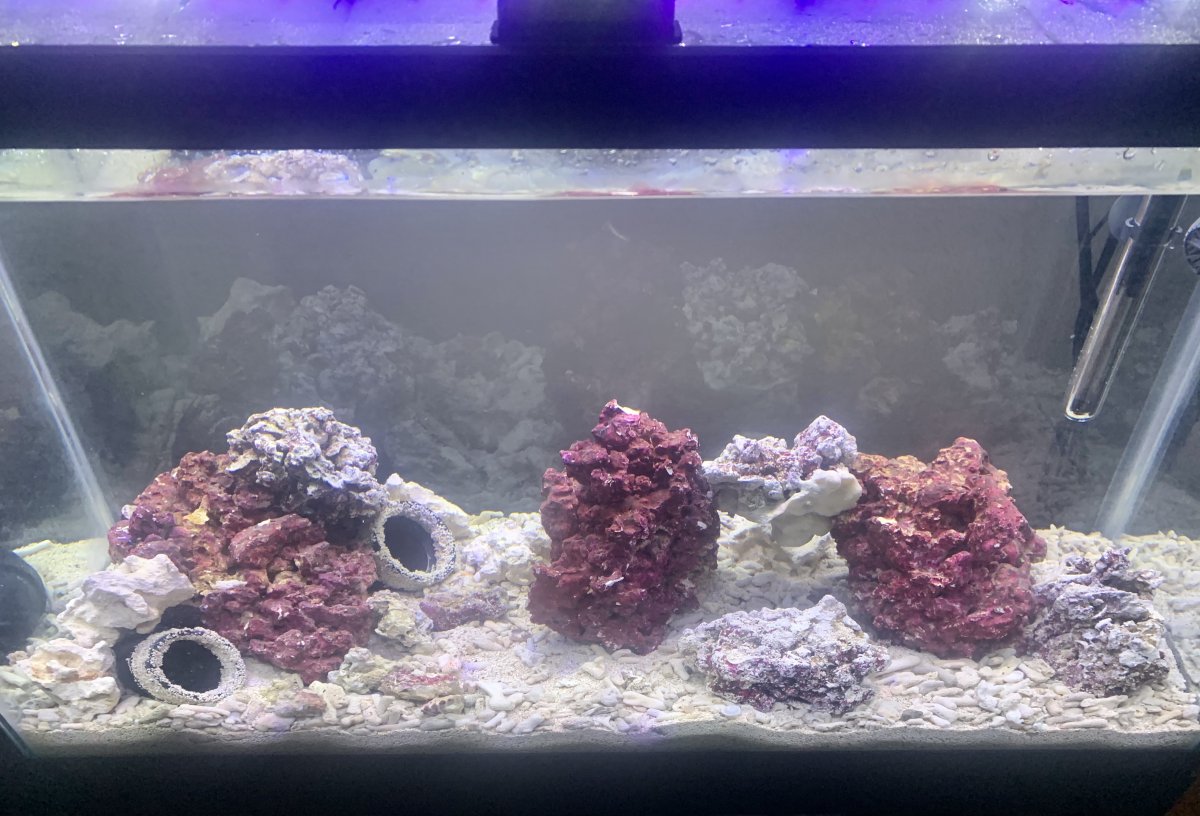 How to setup a peacock mantis shrimp tank

My smithi has been in a blocked off cave for a month is this normal?