Okay, I may have freaked out, but I've had a leaky dishwasher before and I don't want to go through another water loss... they're awful and I would not wait that upo anyone (okay, maybe I can think of a few I would...)

There wasn't much water under the tank and I'm thinking maybe what I found was spillage from filling the tank that found some low/uneven spots on the top of my stand and made it's way under the rim. The stand isn't perfectly level but it's very close and I think I was just finding the water at the lowest corner.

After doing some research I probably was only losing water to evaporation. It was more than I expected, but seems I was expecting to lose less than I should have expected..

After draining the tank and cleaning up around it I put some water in and have been looking for a leak and I havent found a drop outside the tank! Gonna let it sit overnight and see if anything develops. If nothing, I guess I'll be able to fill it back up and make sure I'm more careful so nothing spills and I dont have to wonder if its leaking.

I'm not going with glass canopies, just a screen top. What sort of daily / weekly evaporation do other people see with a 75 gallon display and 40 sump?

May I ask about how many lengths of 2x4 (8 ft lengths) are needed for the aquarium stand you made. Thx

good news... at 79-80 approx 1 gallon day,with canopy fans "summer"1 1/2 gal a day depending on humidity in house
glad to see back in saddle againnow i feel a little better sayin' happy reefing
OP

msjboy said:
May I ask about how many lengths of 2x4 (8 ft lengths) are needed for the aquarium stand you made. Thx
Click to expand...

It came out to just under 52 ft (616 inches to be exact) of 2x4 that I used. If I were to do it again I would probably make it 6 inches taller to have more room in the sump area which would add another 6 feet of board length
Last edited: Jul 3, 2020

Vote for me for senator

Tanks looking great. A good idea whenever I do any new plumbing is to lay paper towels around. I check them from time to time to see if there are any water spots. Most likely the water was lost to evaporation like fishguy said, or you lost a lot more than you think when starting up all you pumps and plumbing. Water fills the pipes and hoses, skimmers, drains etc.

I‘m sure @fishguy242 will drive at least 5 states over if you need help. He’s the bomb.

So it's been filled up again since Friday night and I'm not seeing anything water outside the tank! I guess I was just a bit messy the first time... oops!

I wish the standpipe in the eshoppes overflow box was just a quarter inch taller, otherwise I think I've got it as quiet as I can get it. The water hovers near the top of it and occasionally I get a few drips down the emergency pipe. 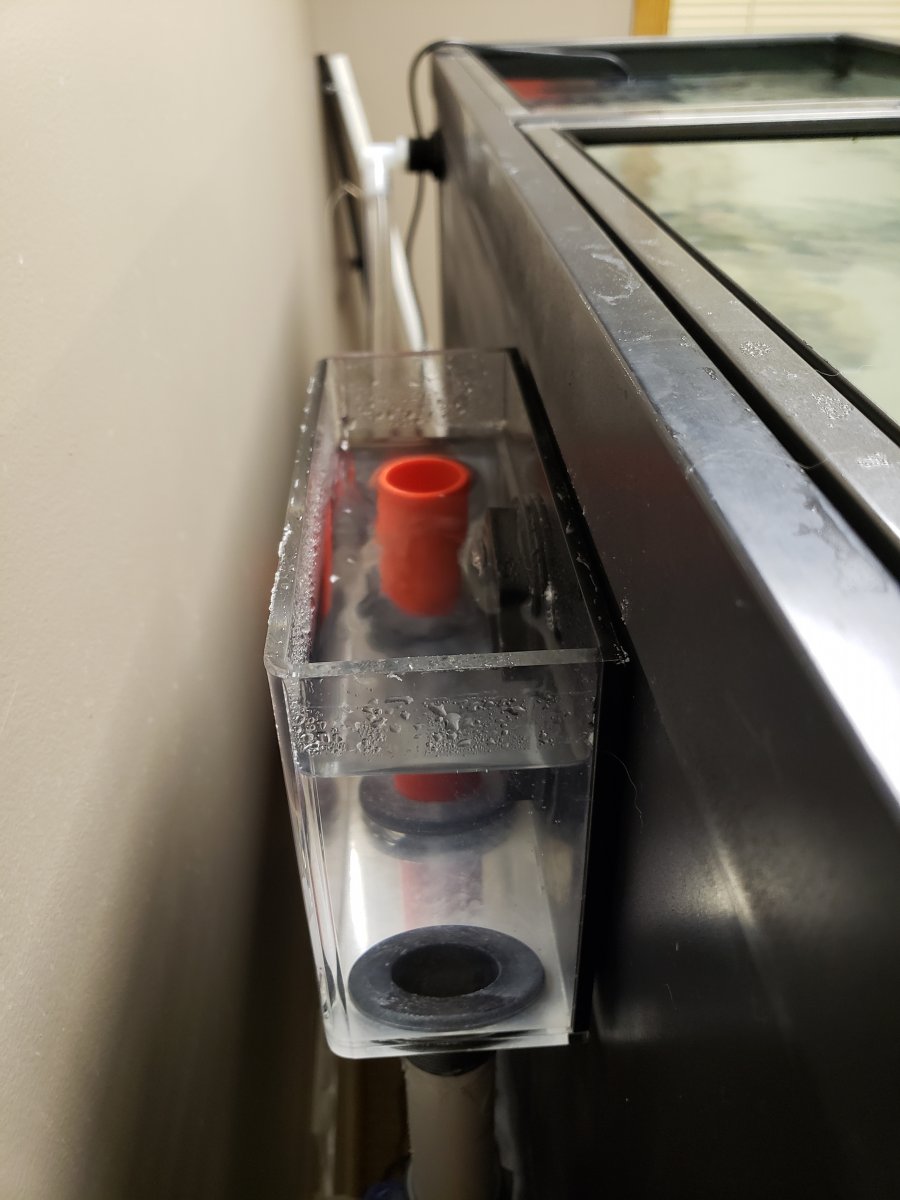 I also got my lights put up today! 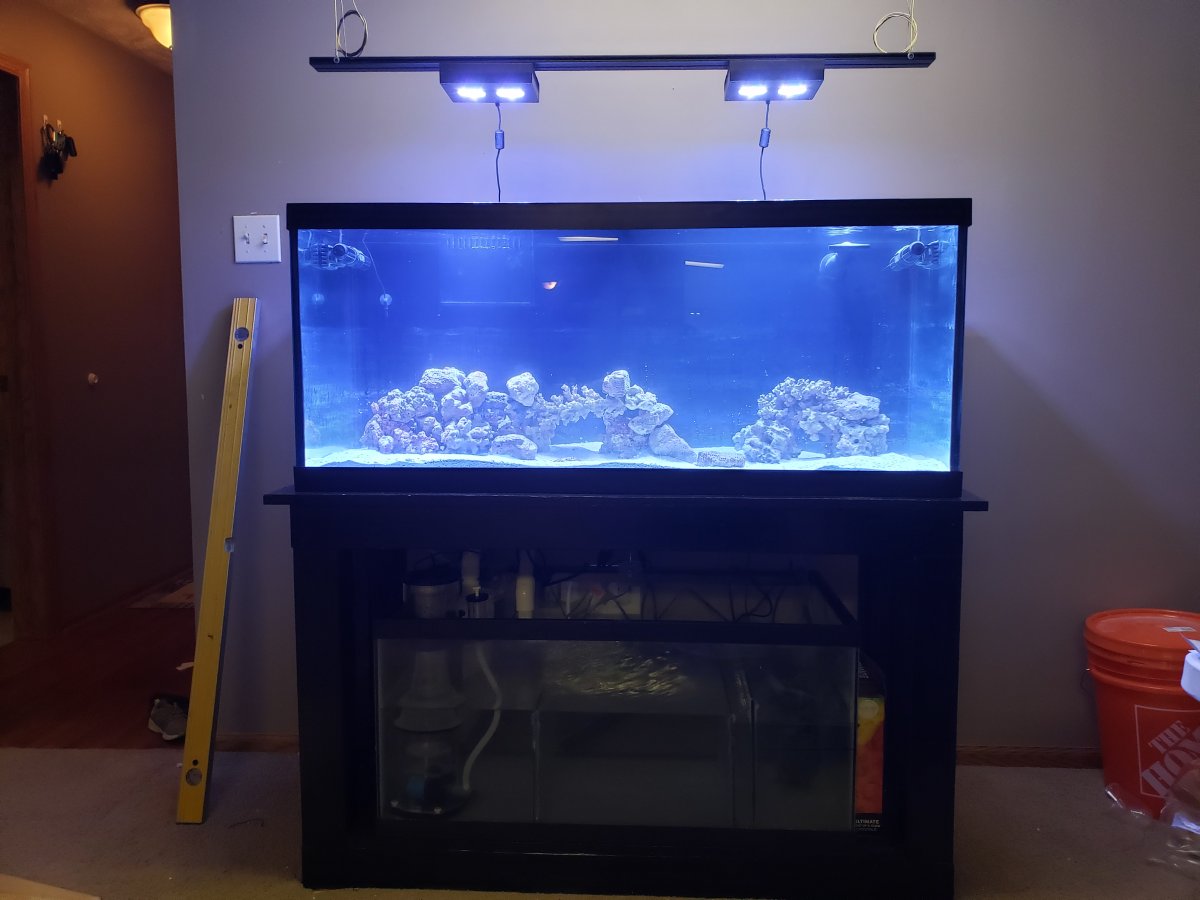 Next I wanna get some more rock, think it's looking a little more empty than I'd like

maybe dial back return pump a bit ,glad to see back up and running
OP

fishguy242 said:
maybe dial back return pump a bit ,glad to see back up and running
Click to expand...

I'm actually very happy where it is, barely have a trickling sound, only time I hear anything down the emergency pipe is when the gyre pump speeds up. Return pump is set to the lowest setting already
OP

What should I do to get the pH up around 8.4? Do I need to get it up higher? I got the water pre-mixed from my LFS (not sure what salt they use).

that is not bad ,check ph at same time of day ,every time you check

Take your time. Add some liquid bacteria every 48 hours and now to think about occasional water testing and create wish list for stocking and establishing heater settings, and other tweaking while you await cycling progress
OP

vetteguy53081 said:
Take your time. Add some liquid bacteria every 48 hours and now to think about occasional water testing and create wish list for stocking and establishing heater settings, and other tweaking while you await cycling progress
Click to expand...

I havent bought any liquid bacteria yet. Any recommendations on brand?

Meltdown1313 said:
I havent bought any liquid bacteria yet. Any recommendations on brand?
Click to expand...

Been doing microbacter 7 for a few days now. Decided I wanted a bit more rock so when I went to the LFS to get some more RO/DI (evaporating about a gallon a day) I picked up a couple cured live rocks. 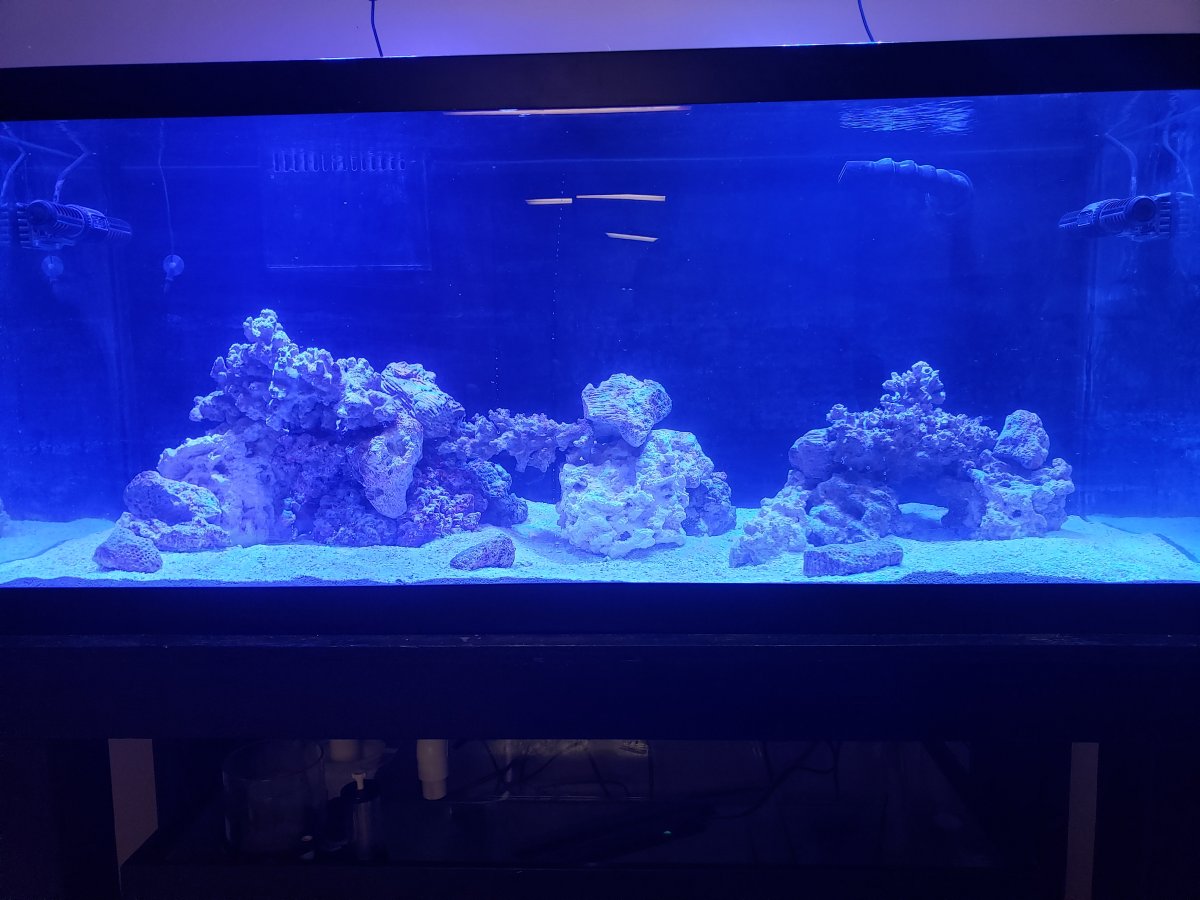 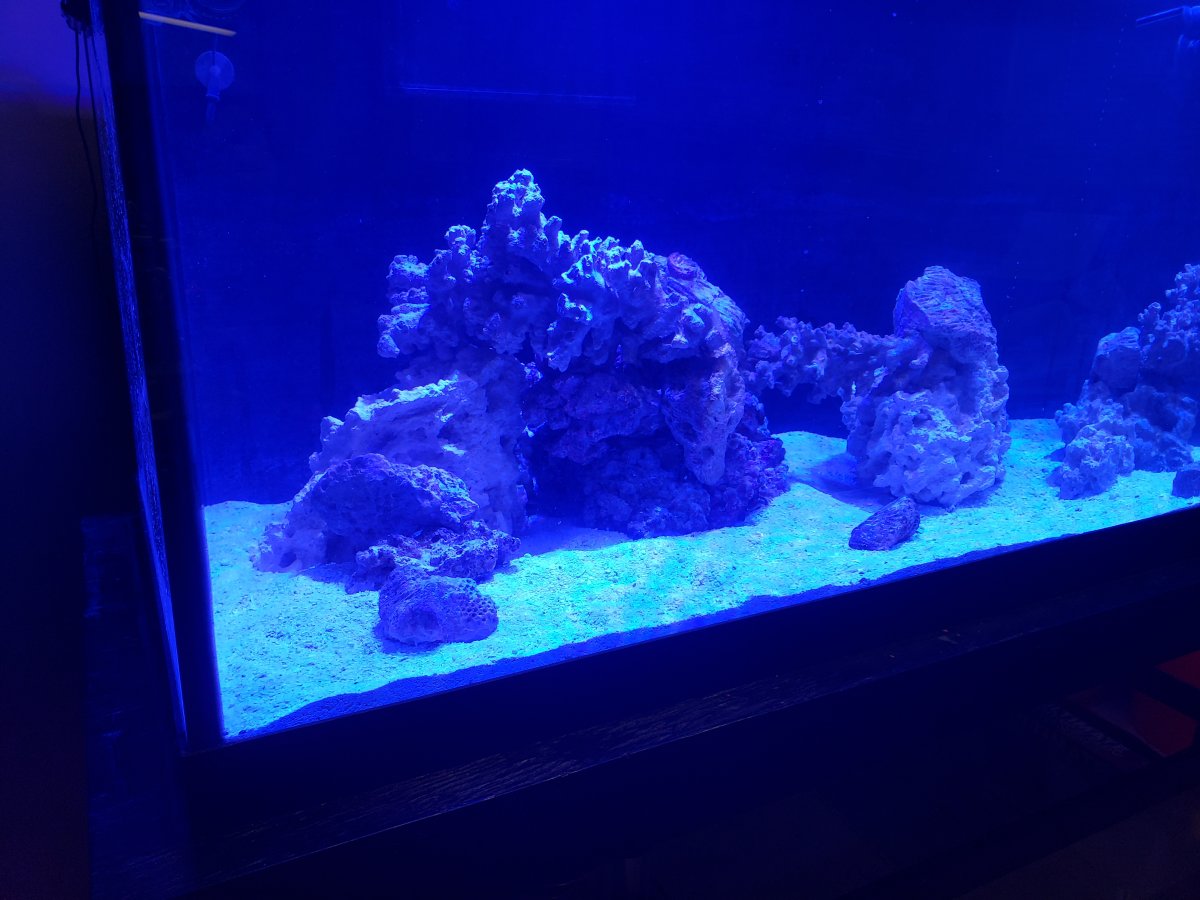 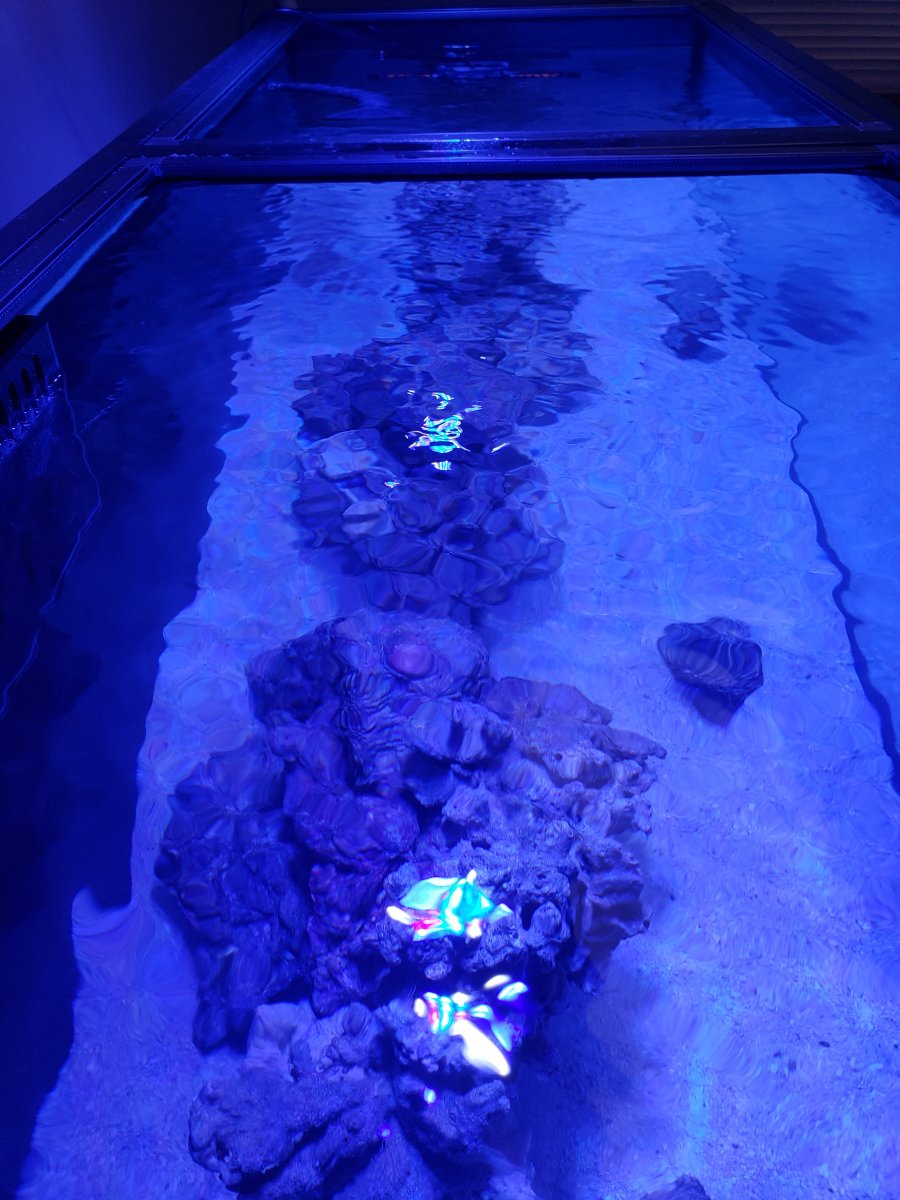 Wish this cycle would finish so we can get some fish already!

Sweet start and can't wait to see it filled up!

So I haven't been testing my water lately, just adding microbacter 7 every day, mostly because the kids must've lost the color card for my test kit and I finally decided to go grab a new test kit to check the levels.

The ammonia looks like it's at 0 as do nitrites and nitrates. But I noticed a bunch of hair algae on the rocks that definitely wasnt there the other day..

I also noticed this on the glass 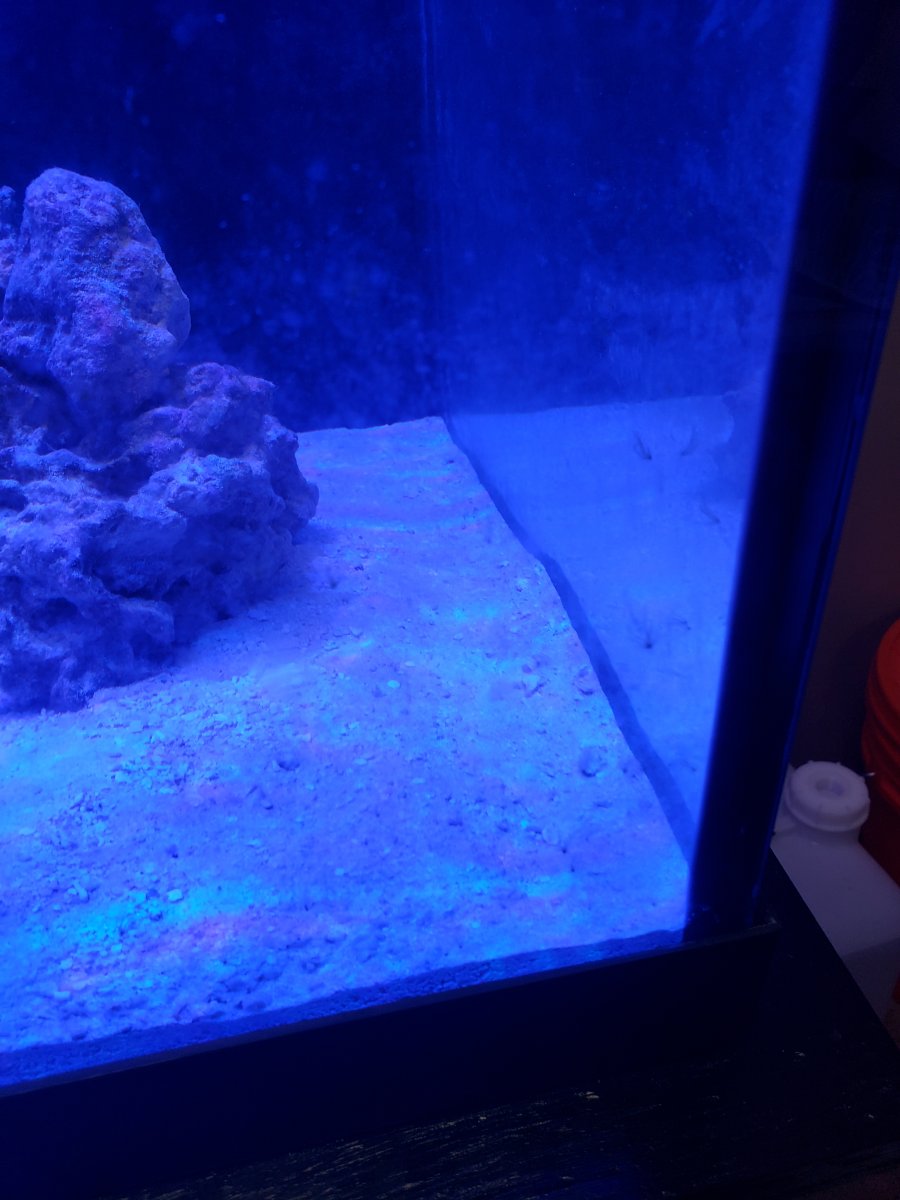 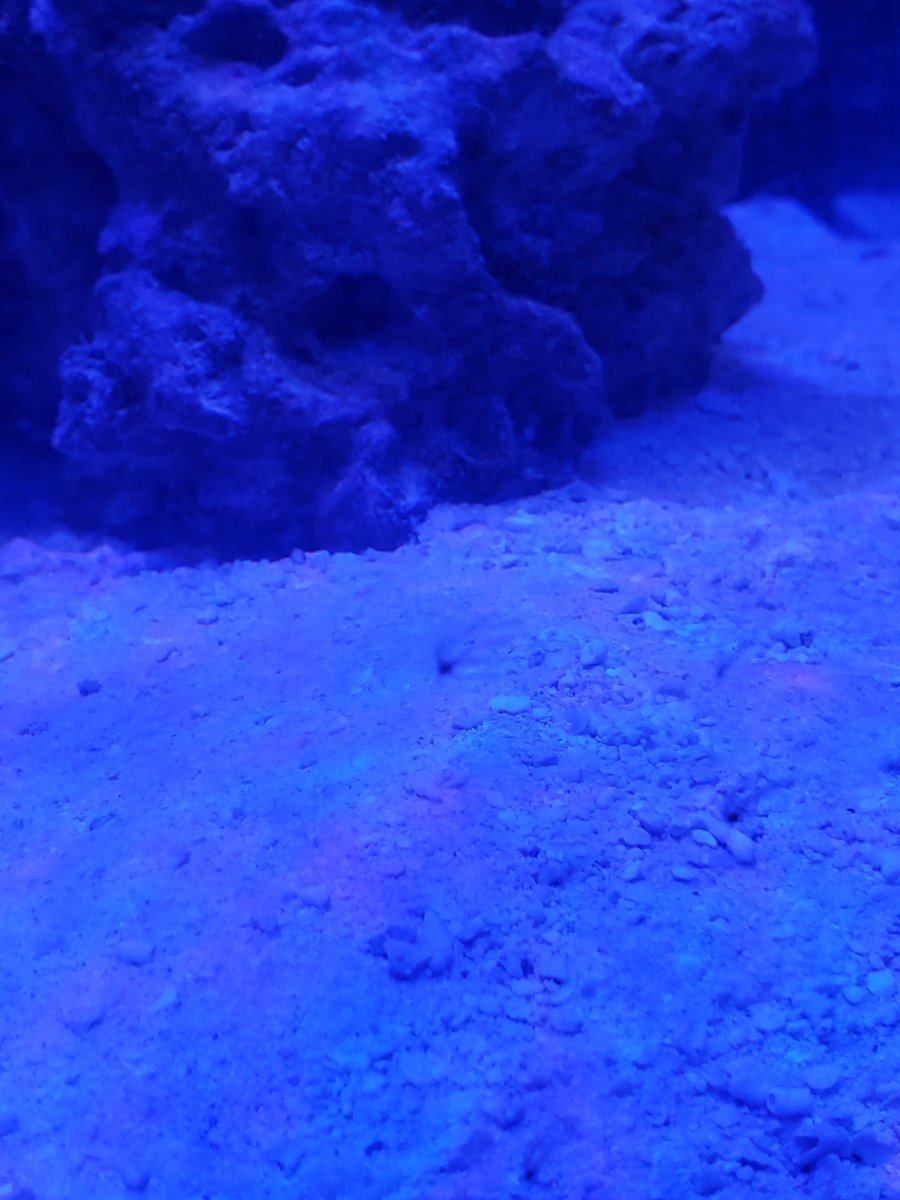 They're kind of hard to see with the phone camera but there are quite a few on the glass. Is that just algae?

I'll get the good camera out tomorrow. Phosphates aren't getting a reading.. but API test kit goes from 0 to .25 on the chart
OP

So after not getting any readings for phosphate or nitrites/nitrates for a week and seeing the hair algae explode on the rocks, we decided to go out and grab some new friends for the tank!

My wife and the oldest really wanted to get a pair of clownfish. The ones they had that they liked were being very aggressive and they talked us out of getting them first since he said they were jerks and worse if you put them in first. I knew they could be aggressive but apparently they can be much meaner than I thought. We ended up with 2 cleaner shrimp, a yellow tang and a sea hare.

My wife fell in love with the sea hare after she saw it crawling through one of the frag tanks. I had no idea how good these guys were at clearing out algae when we brought him home. There is almost nothing left on the rocks now! 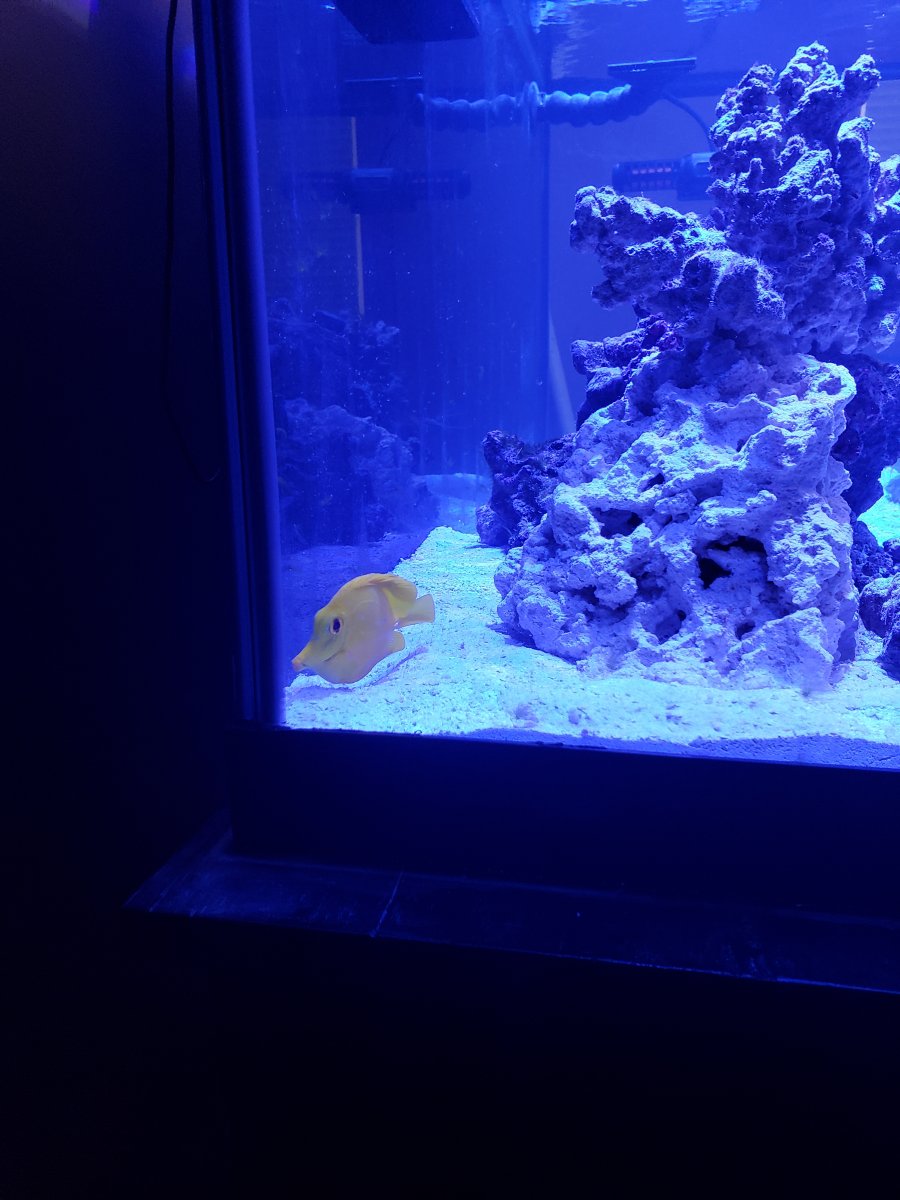 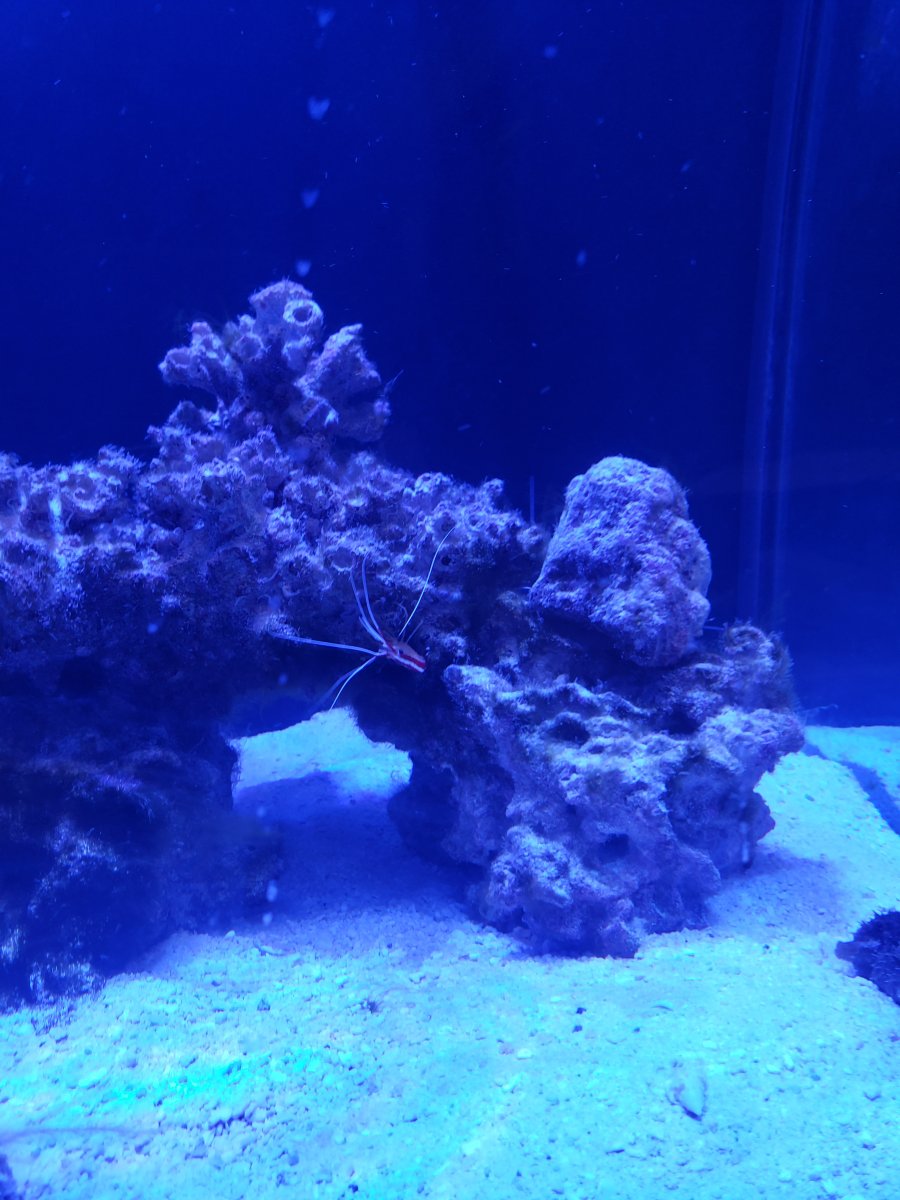 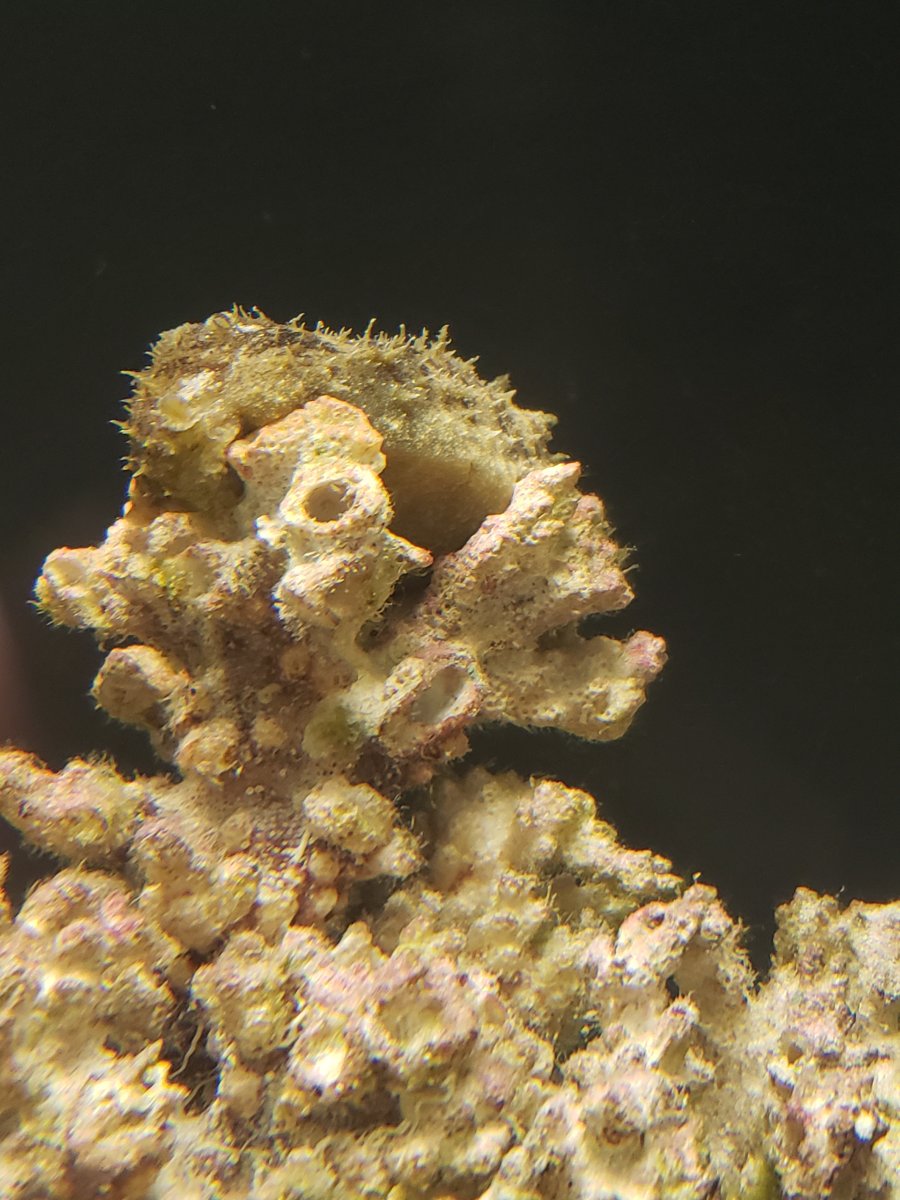 He loves climbing all over the rocks

I went down to test the water a little bit ago, lift the lid and saw this tonight 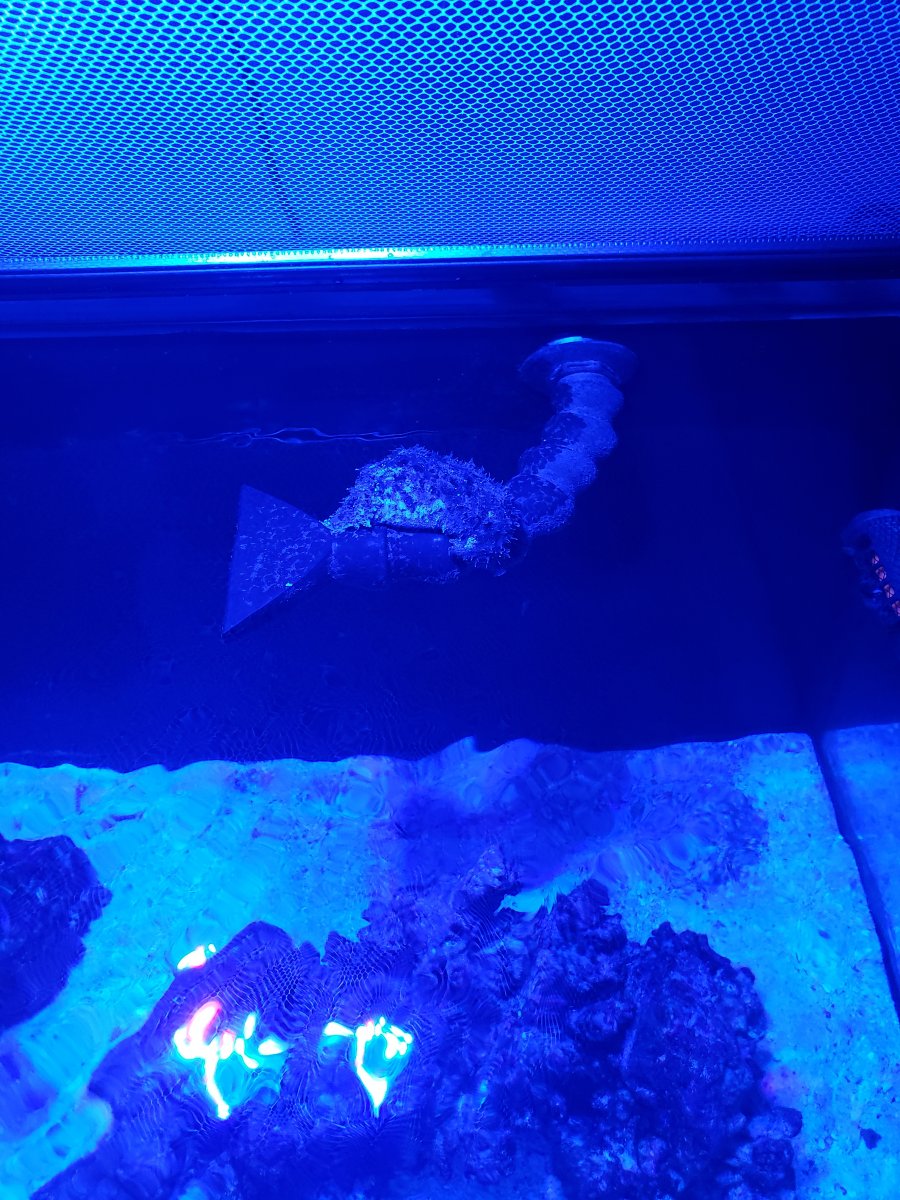