I’m starting my first tank in 6+ years and my 3rd ever reef tank.

The goal with this one is to build a streamline (hence the AIO), attractive nano reef in the condo I share with my fiancée who has never been involved with a reef tank (or fish tank of any sort). She doesn’t care what I do, so long as it’s pretty and there’s no clutter/mess.

I picked this tank up as-is from a local reef club member. As you can see it’s been slightly modified. It’s topless, but I have a Kraken lid coming soon. It’s also running the Current USA Led and Wavemaker on the Loop system. Stock
Pump in chamber 1 (may upgrade), heater in chamber 2 (may move to chamber 1 and create a refugium in chamber 2), and media basket insert in chamber 3 which contains fiber on top, carbon in the middle, and Fluval bio media on the bottom).

As you can see, there’s no rock in it yet. I’m picking up some established rock this weekend from different members of the local reef club - all of which has coralline and some hardy sponges, mushrooms and polyps. The live rock will drive the cycle along with natural sea water I’ve pulled from nearby Winthrop, MA (not treating it… only bringing to temperature and pulling out macro items like seaweed). I know there are risks, but almost every post from someone who has used NSW seems to be positive.

Once I start reading Nitrates and the Ammonia level drops, I’ll add a small CUC. Once parameters are stable, I’ll add a few hardy softies and probably a tail spot blenny and a pair of black ice clowns.

Eventually, I plan on upgrading the light and growing some SPS. But… baby steps. 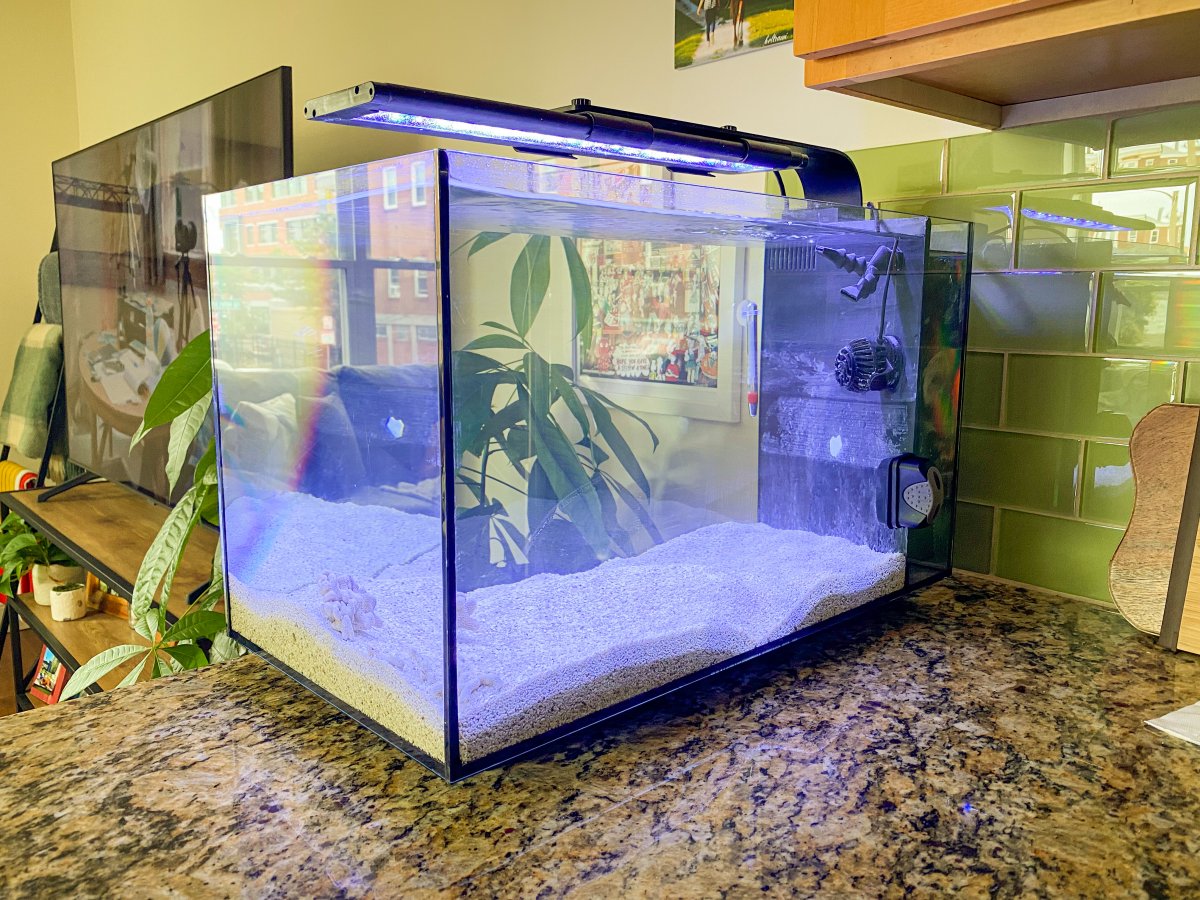 Man I don't know what it is but I love where you have the tank. Perfect place to make waffles, watch the game, and the tank! Can wait to see the updates

Saltysocks said:
Man I don't know what it is but I love where you have the tank. Perfect place to make waffles, watch the game, and the tank! Can wait to see the updates
Click to expand...

Thanks! Our condo has an open kitchen/living room setup and this is right on the edge of the peninsula counter with our stools. So it's a great spot to watch while you eat or glance over at while you watch TV.


Saltysocks said:
Also make sure you copy and paste the internet link to your account so you can get the build thread badge
Click to expand...

I’m only adding fully cured live rock to this tank. I’m not trying to rush anything, but I dont want to be seeding dry rock through this startup. I added my first two pieces of established live rock on Wednesday thanks to a local reefer. Adding a few more tomorrow from another local reefer.

As you can see from the close-ups there’s a ton of life on these rocks (including some Zoas). I’m monitoring ammonia/nitrite/nitrate/ph as part of the startup, but I’m hoping that using only cured rock will enable my new setup to process any ammonia jumps pretty quickly and limit any significant die off on these rocks. 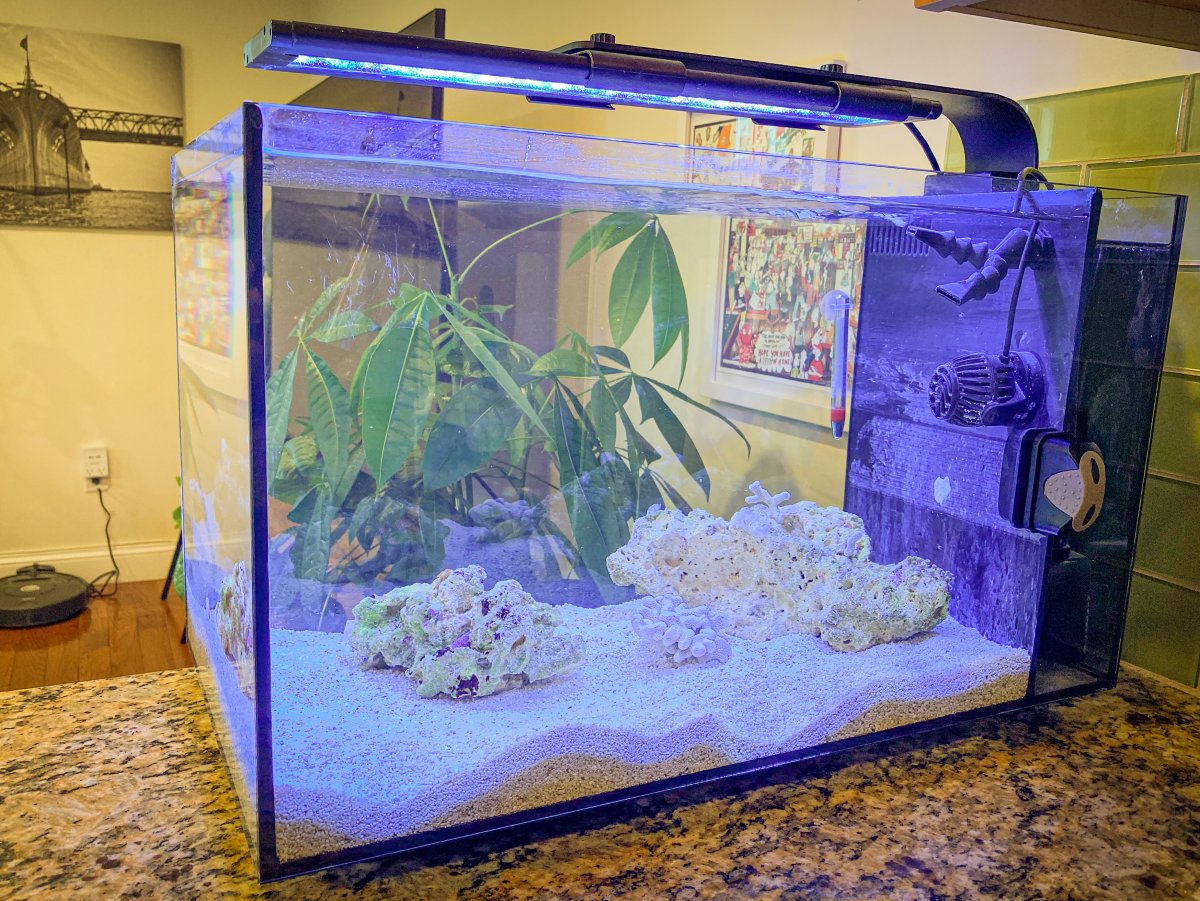 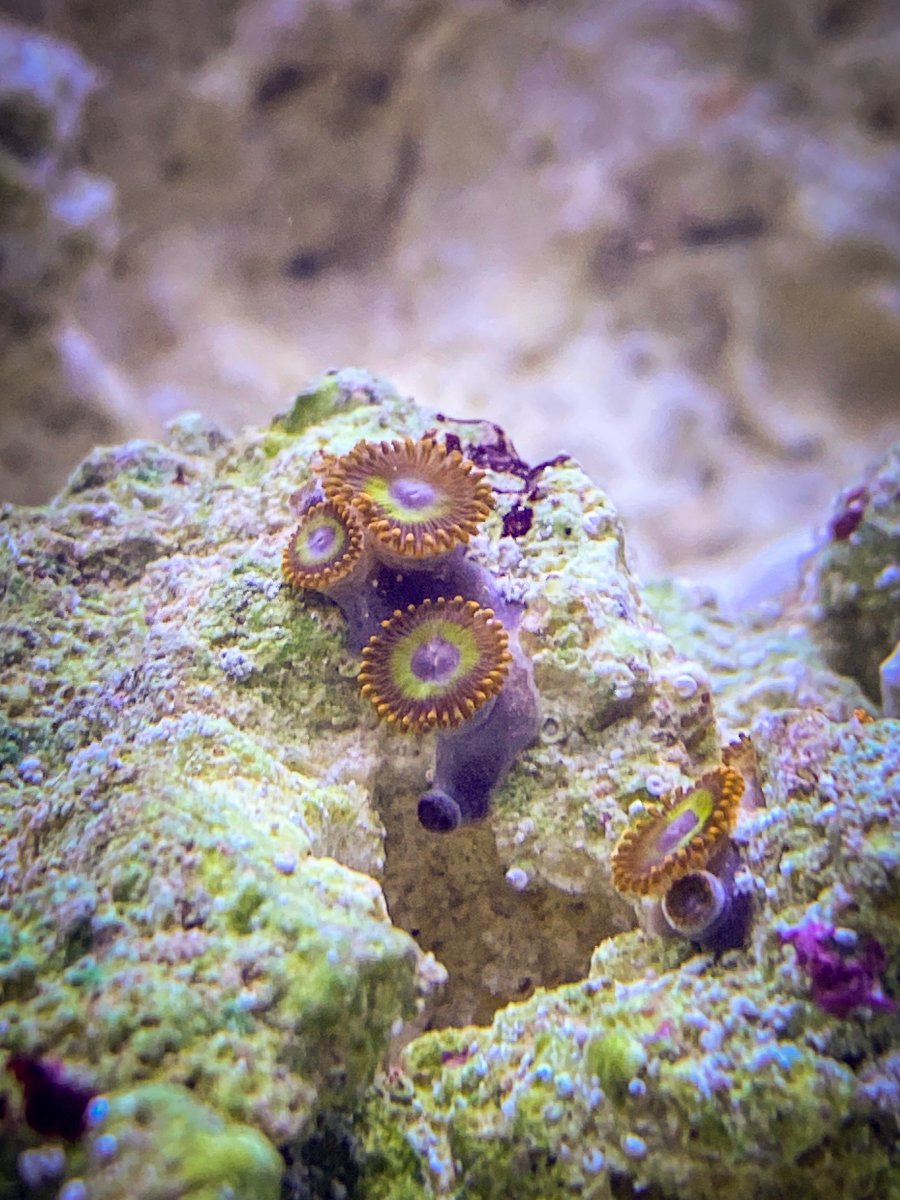 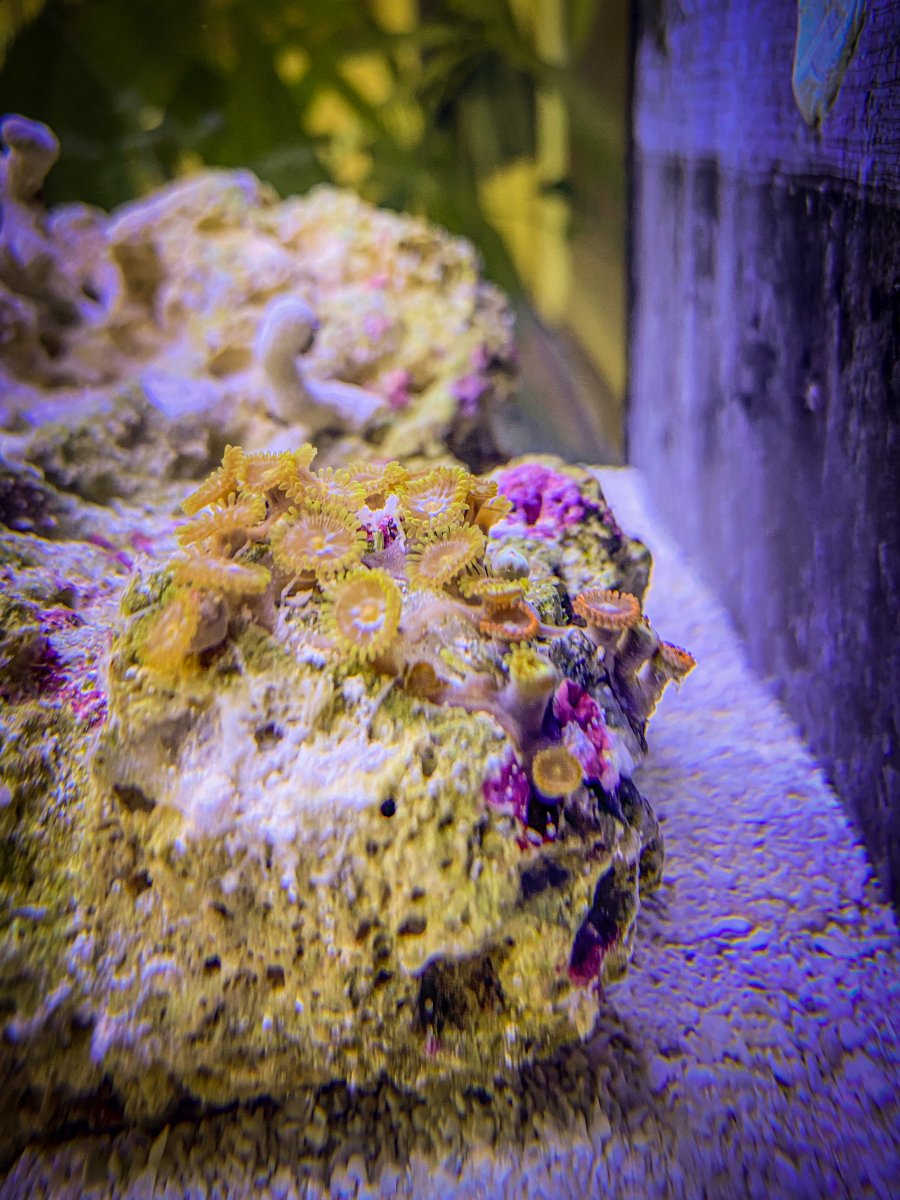 Newest rock thanks to another local reefer - absolutely covered in frilly mushrooms and a handful of clove polyps. 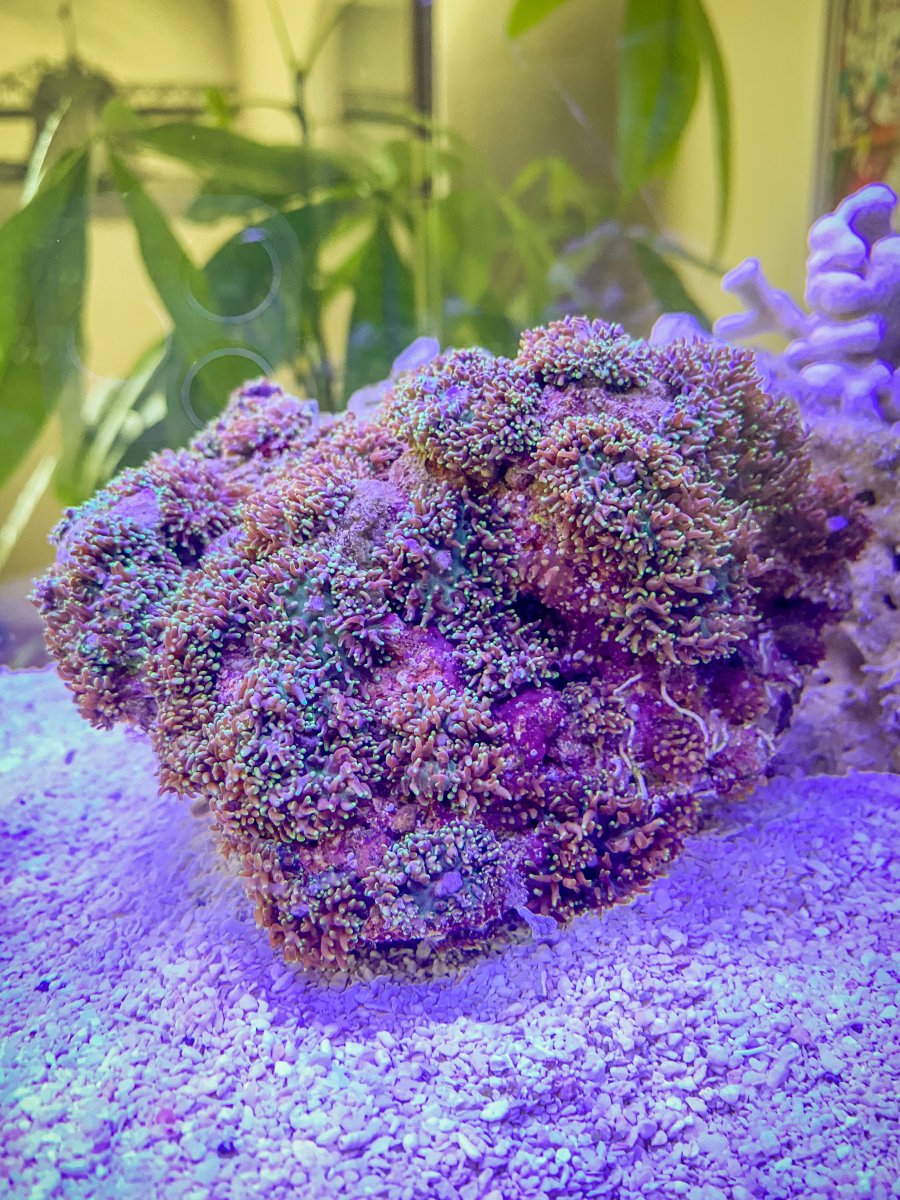 the tank is about a week old at this point and I’m still getting no ammonia/nitrites/nitrates. I’m kind of surprised. While this rock is local, I expected at least some die off to trigger a bit of a cycle or spike. I’ll watch for another week or so and then maybe try to add something organic (a few fish flakes most likely) to see if the established rock already has a bit of a bio filter or if it triggers a spike/cycle. I’m guessing there’s already a good filter in place considering how established this rock is and the likelihood that any die off should have spiked ammonia a bit, but I’ll give it another week or so of observation to see for sure.
OP

I got the Kraken lid (and slightly modified it to fit the cord for the powerhead). Turns out a LFS nearby stocks them so I didn’t have to order and wait. Love this thing! 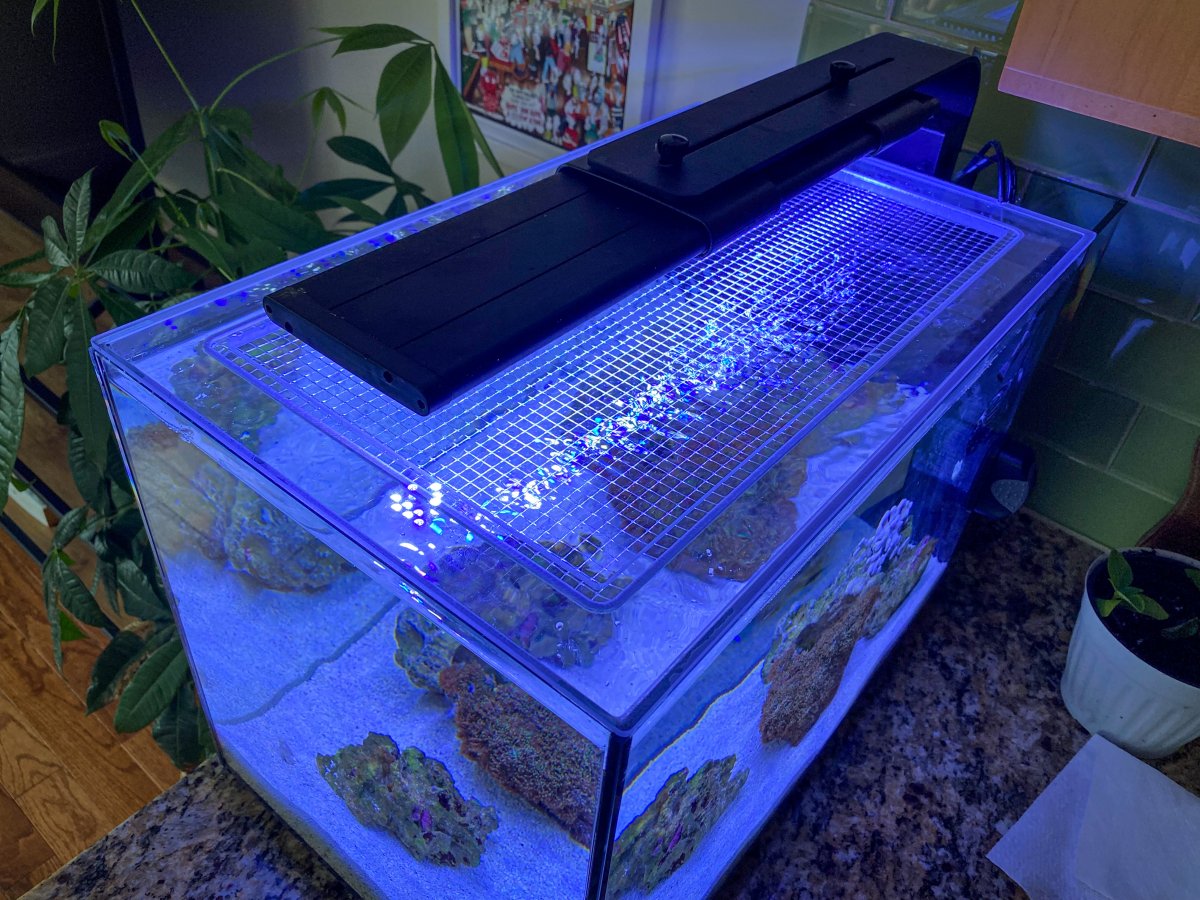 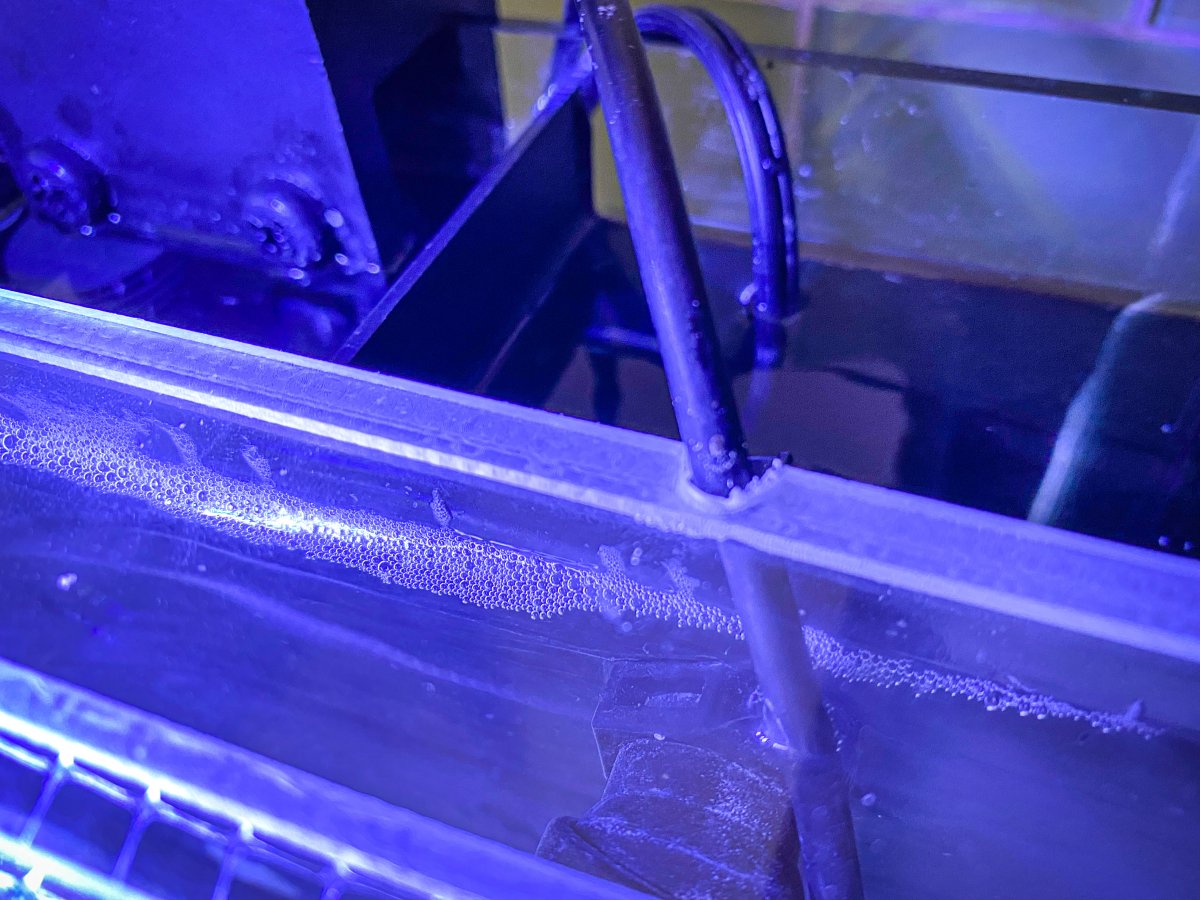 Ohhhh we are getting some uglies already… 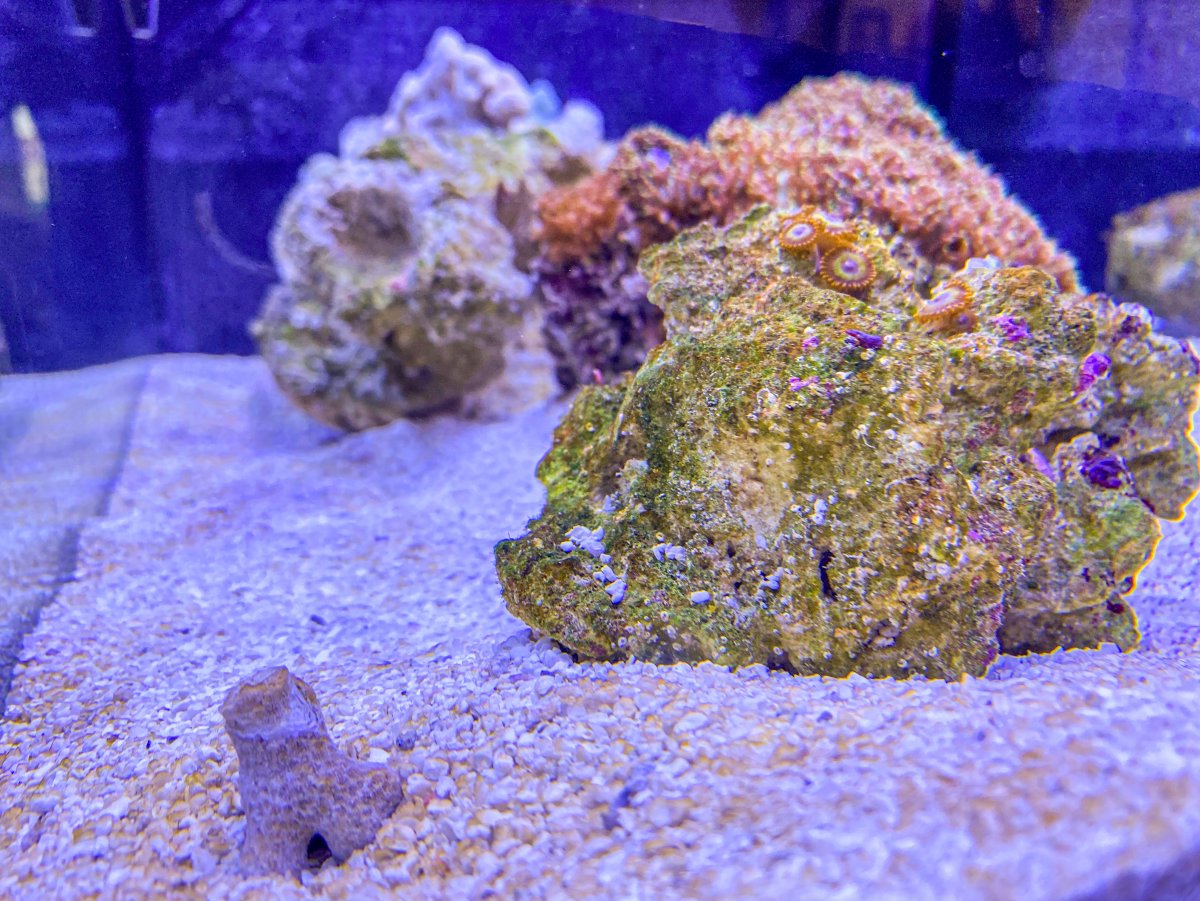 I hate the uglies, but it’s generally a sign that things are proceeding as they should be. I’ll ride this out without tweaking anything. If parameters remain stable (currently - ammonia: 0; nitrite: 0, nitrate: 1), I may add the beginnings of a CUC in about 7-10 days.

Using only cured, mature live rock has so far prevented a major spike in any of the parameters, and I’m certain there’s already some bio filter capacity, but it’s so new that I’m going to wait a bit before adding even a few little CUC. I don’t want to risk a big spike. Slow and steady.
OP

In the past week, I’ve had enough algae and diatom growth to add a small CUC. 4 hermits, 3 trochus, and one nassarius. They’ve been in the tank for 5 days and seem to be doing well. I love the nassarius - it’s buried all day, but comes busting out of the sand bed when I ghost feed and mops up whatever flake or pellet happens to be in front of him. Never had one before, but it’s super cool.

parameters remain steady and I’m just about ready for fish - the upside of starting with cured live rock. But I’ve got a little bubble algae cropping up on one rock - the downside of starting with live rock. I’ll scrape and siphon during tomorrow’s water change (the first since I started this thing). I have the ocean water (collected today) warming up to temp/circulating as we speak.

if tests look good the rest of the week, I’ll add my first fish (tailspot blenny) and maybe a frag or two this weekend.

some pics (diatoms stabilizing a bit) from today: 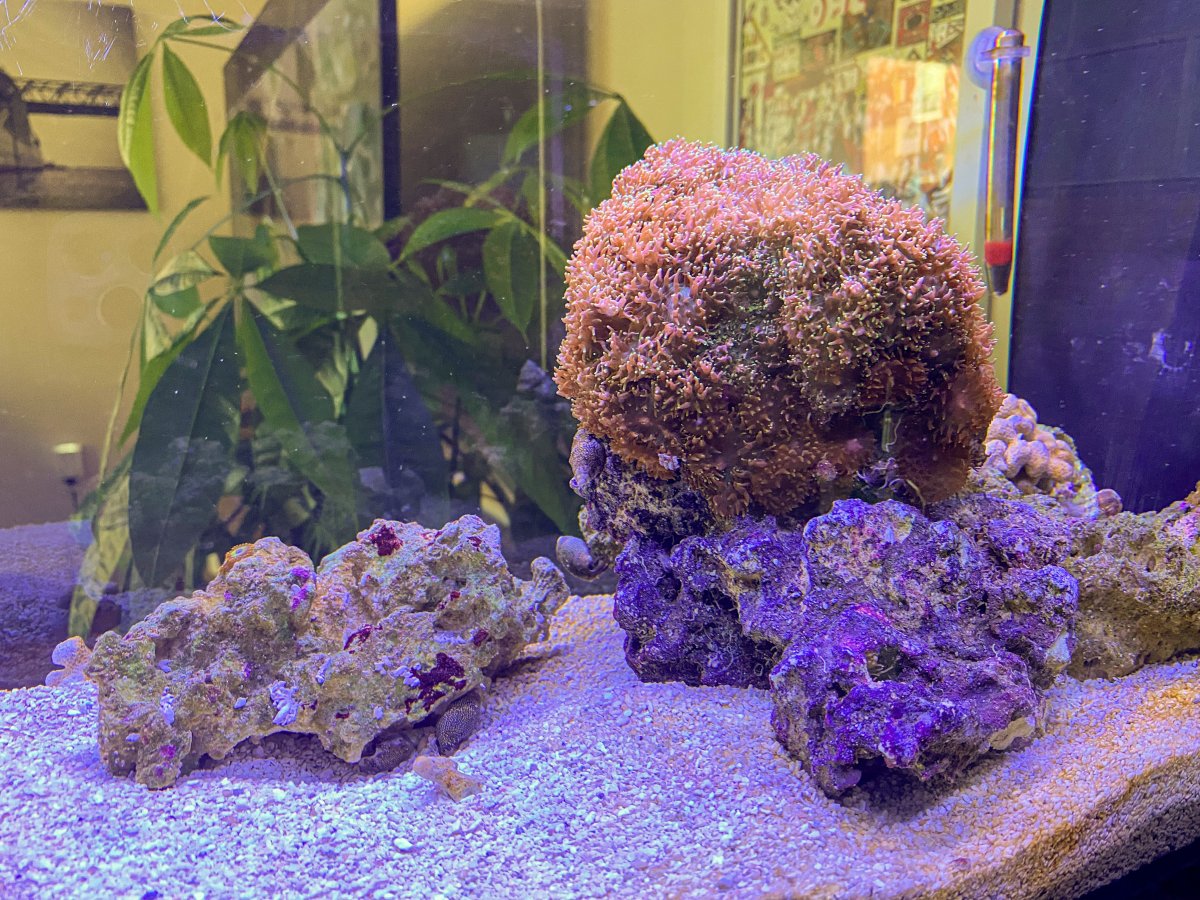 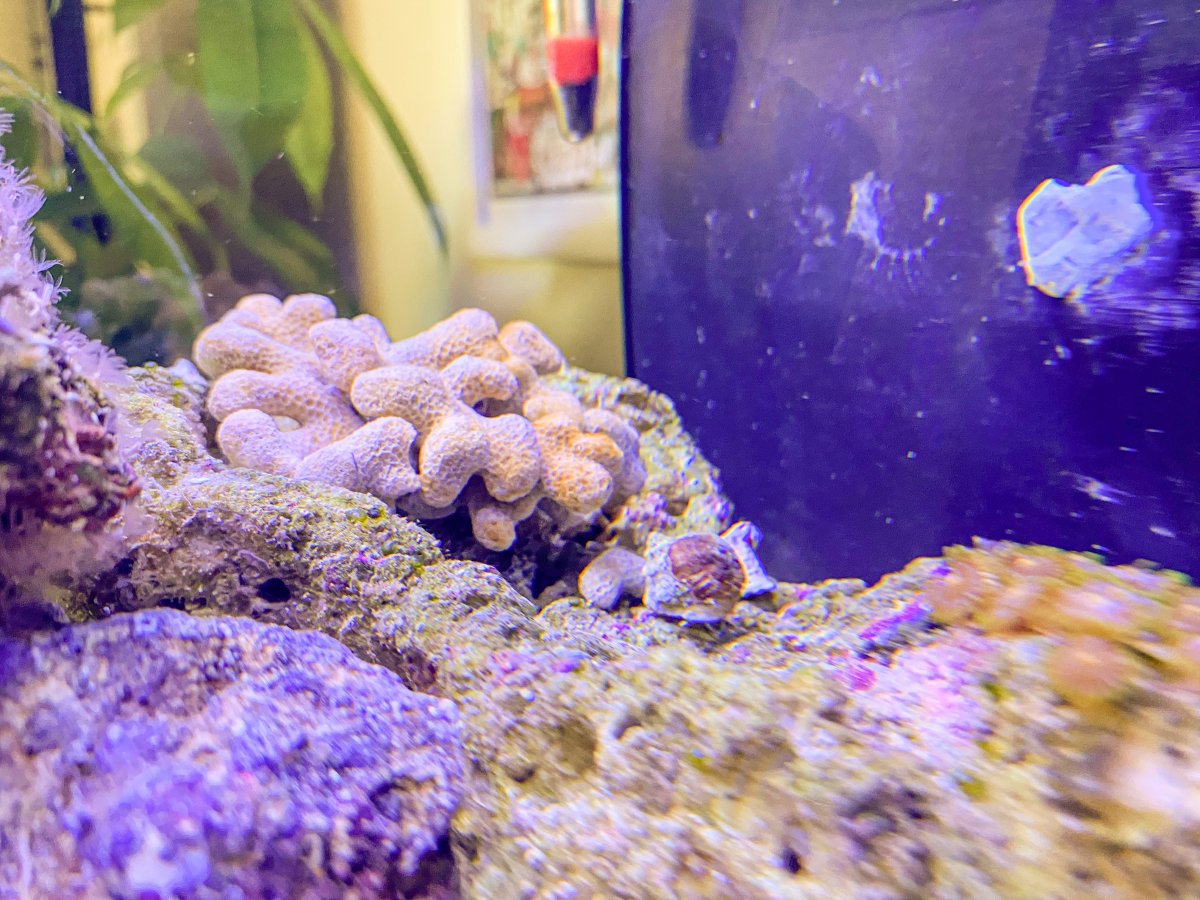 Collected for my water change today. This is my spot - collected from a jetty just before high tide. 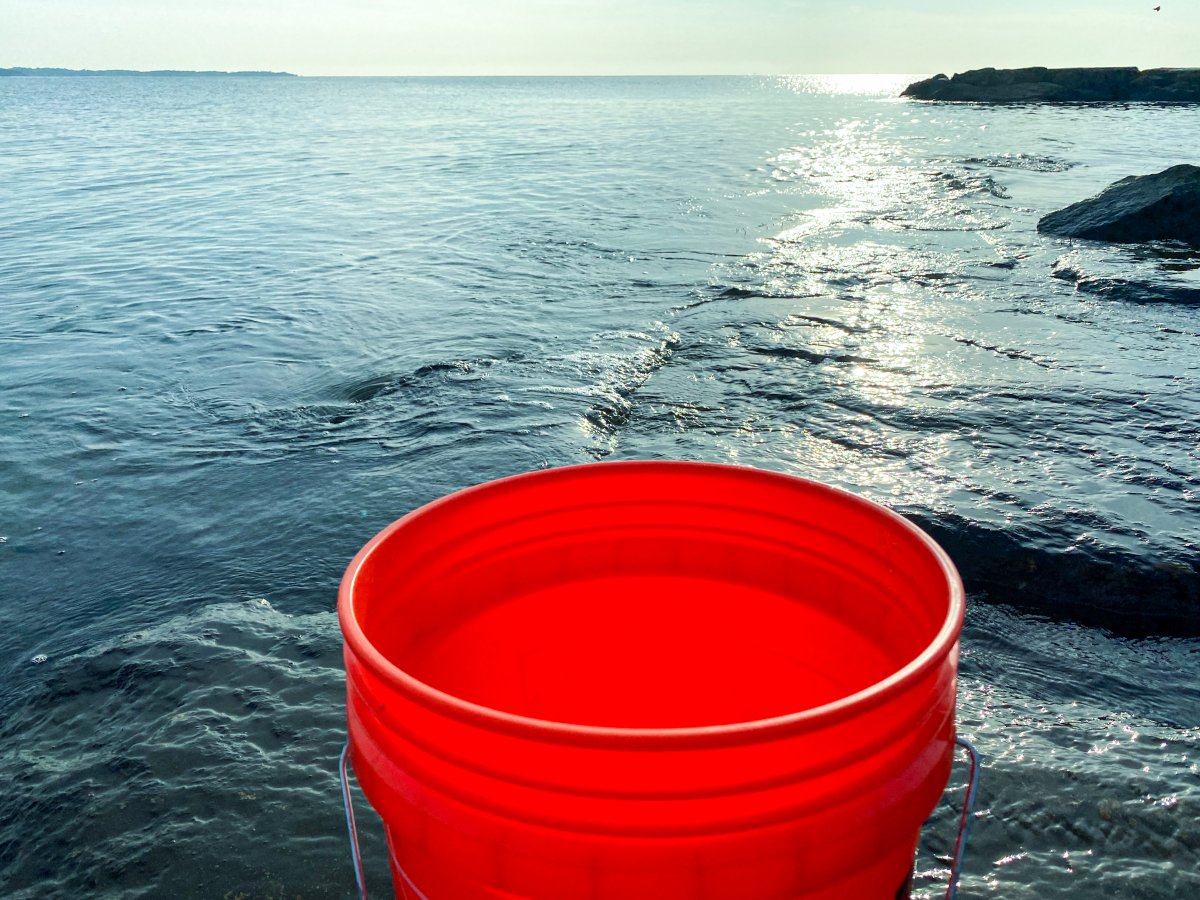 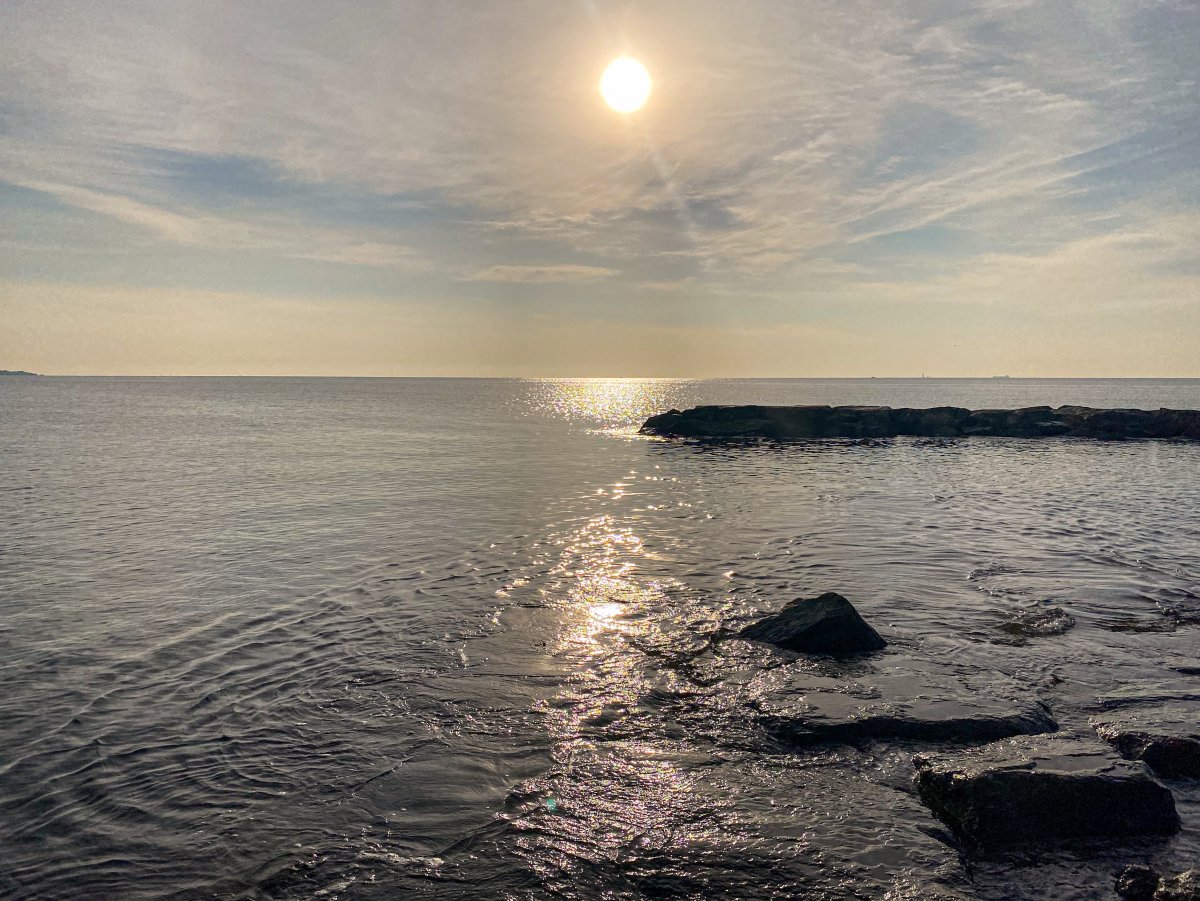 I added my first fish on Wednesday. Tailspot Blennies have ALWAYS been among my favorites. They’re a blast to watch, they don’t bother anyone, and they’re pretty and subtly colorful. The first day it hid under the frilly mushrooms. On day 2, it came out for some frozen brine shrimp, but hid the rest of it. Days three and 4, it seems it’s comfortable. It is perching on the mushrooms, picking algae off rocks, and eating brine and flakes like a pig (though it still looks like it could gain a little weight). No more tiger stripes of fear. 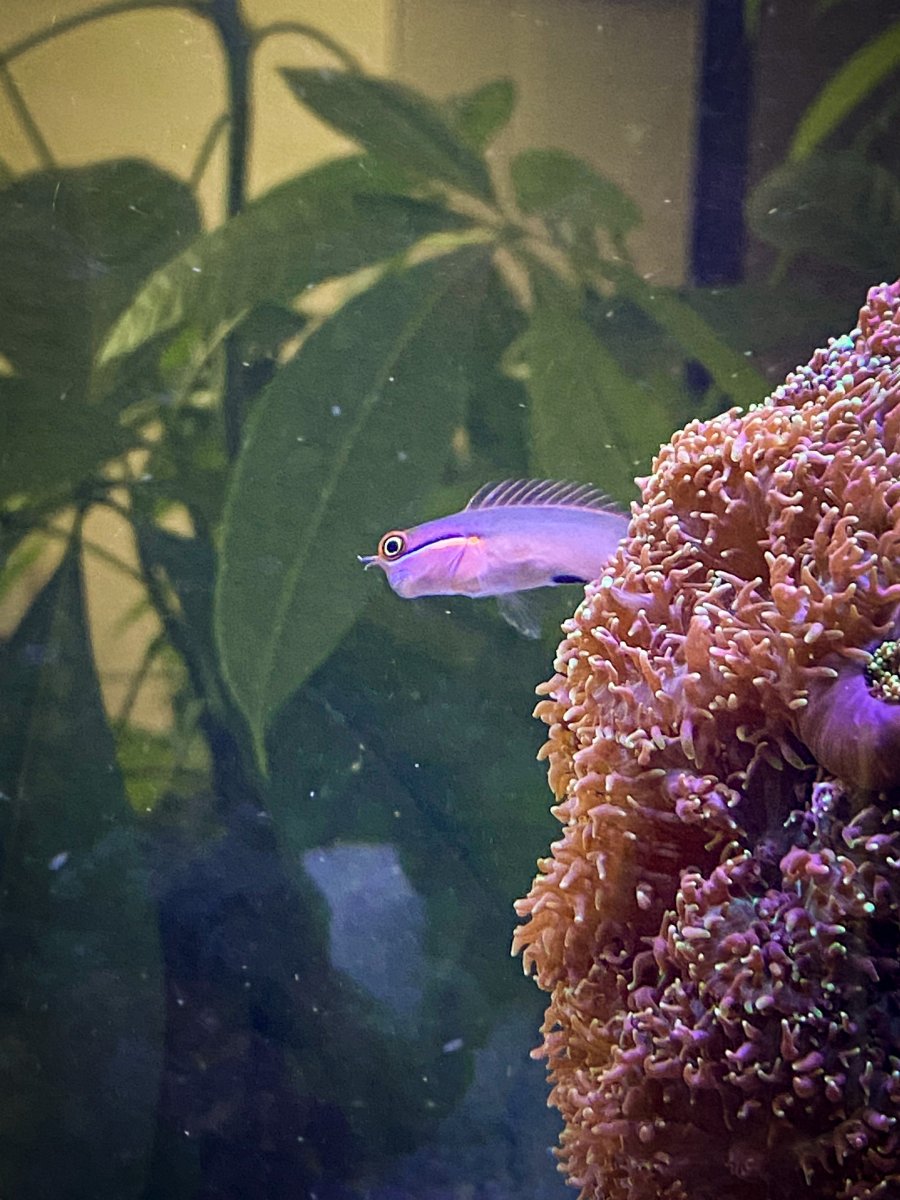 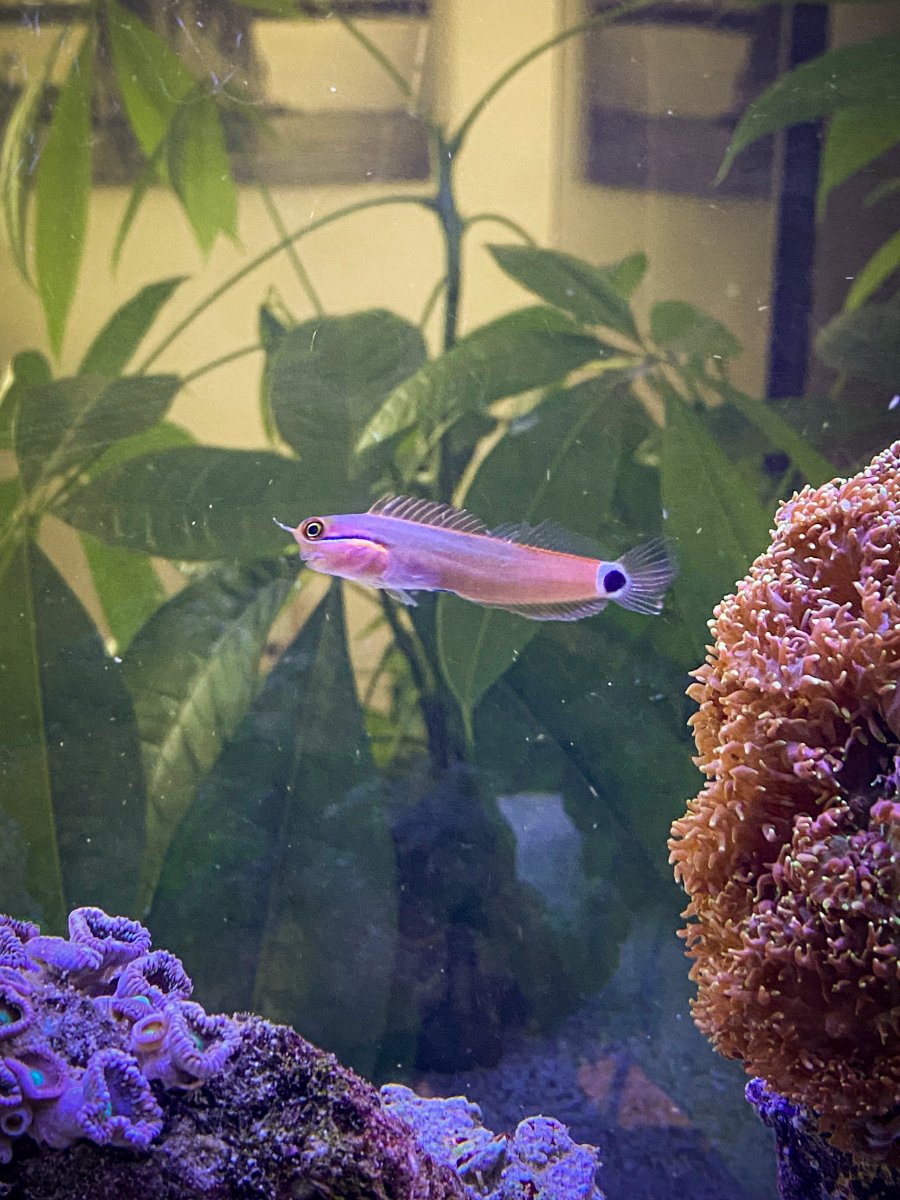 This fish is loving the frilly mushrooms. I imagine it’ll be an issue in a few weeks when we add a pair of clowns. They’ll probably go for this spot too. 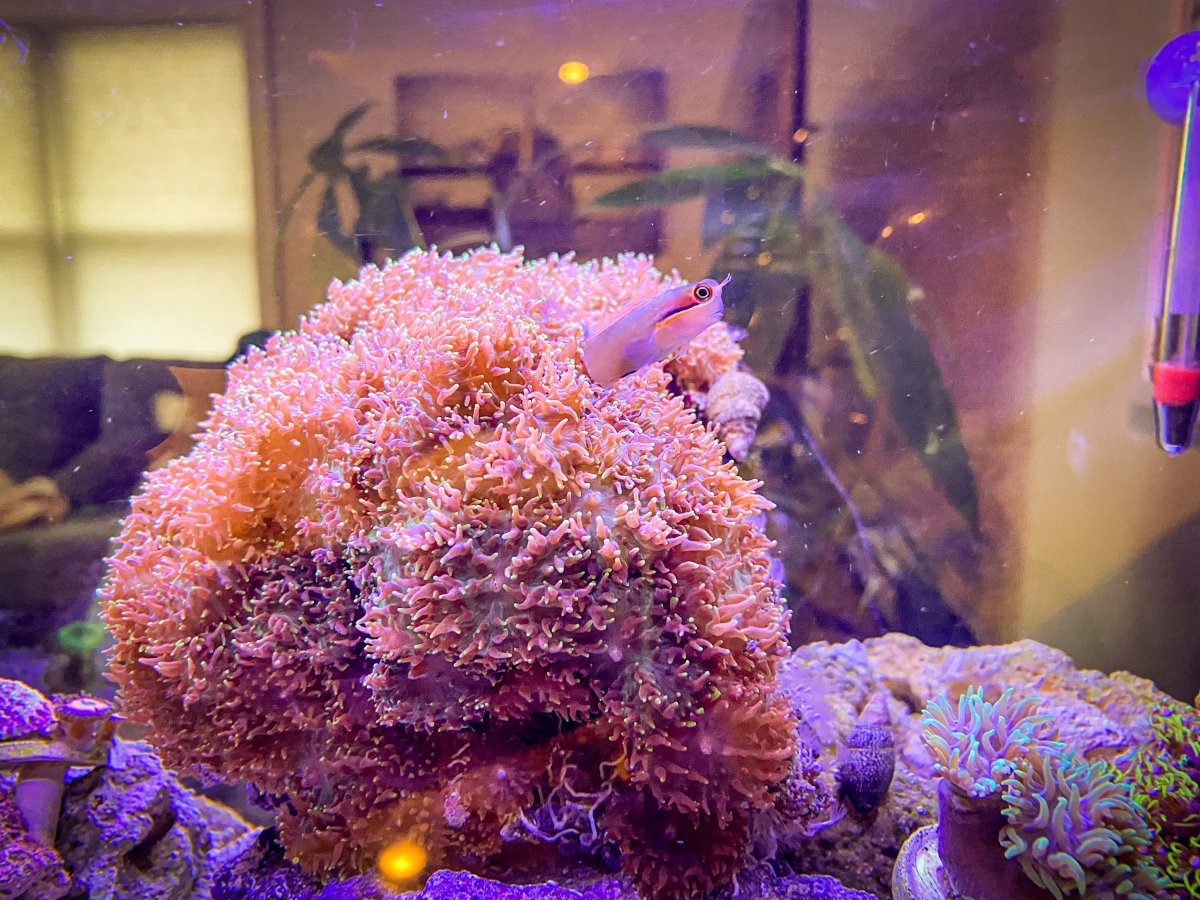 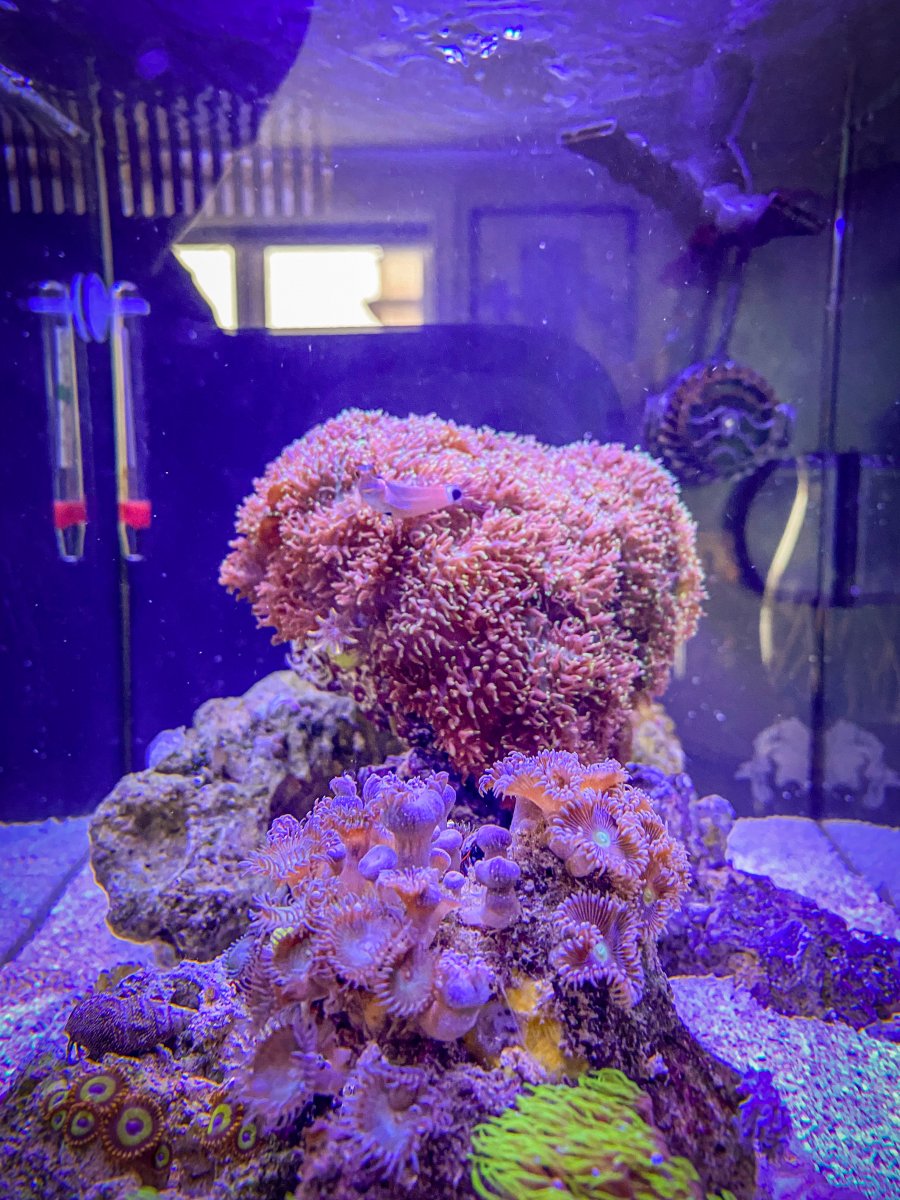 I know a lot of people have this tank - do any of you not feel the need to upgrade the pump?

When I started this tank, I just assumed I'd be upgrading the pump pretty quickly. But now I really don't think I'm going to. The stock pump/nano wavemaker combo is more than enough. In fact, I'd argue that flow is too strong in some spots with the current setup. Who knows, maybe i'll feel differently when everything grows in, but I'm definitely all set for right now.
OP

Just a few more shots of the setup now. Candy Cane is splitting after a week and I have several new Zoa heads. I’m not going to do much else apart from watch and water changes over the next few weeks, but in early September I’m likely going to upgrade to the AI Prime 16HD. We are also in the market for a pair of clowns, but they’re at least a month away. 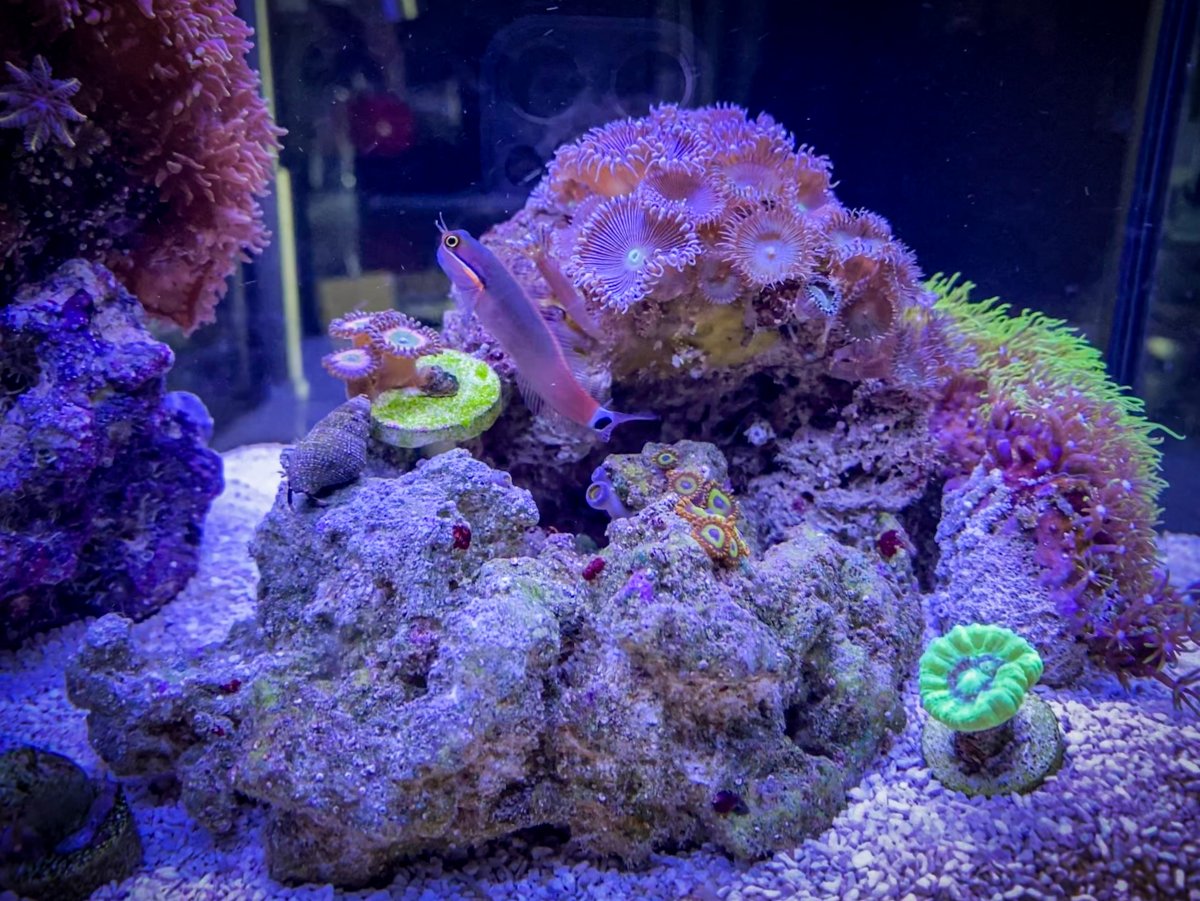 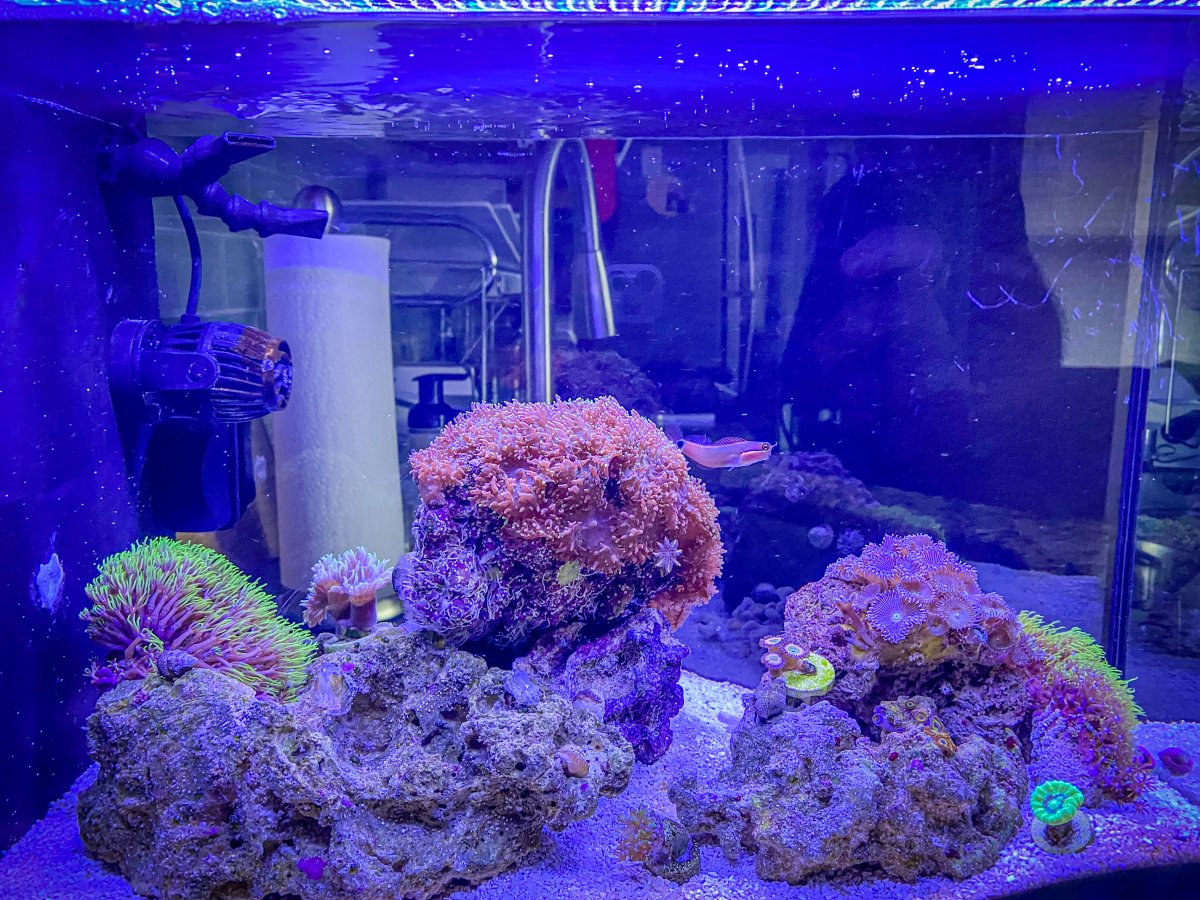 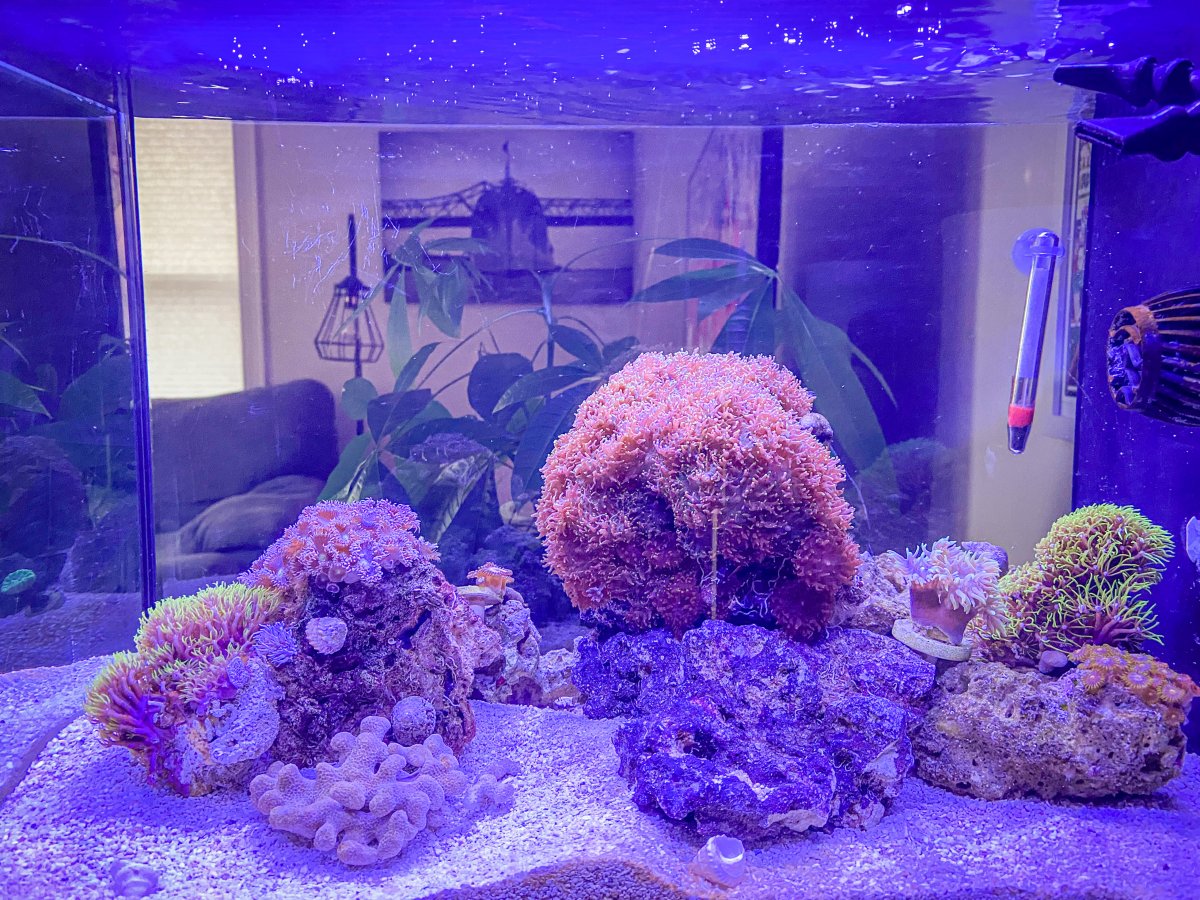 I really love this @Kraken Reef lid. It’s going to look even better when my AI Prime 16HD gets here in a few weeks. The diatoms? Well, I like them less. But hopefully between some tweaking of the flow and tank maturation, they’ll go away. The trochus are doing great work on most surfaces. It’s just the sand bed that’s messy. 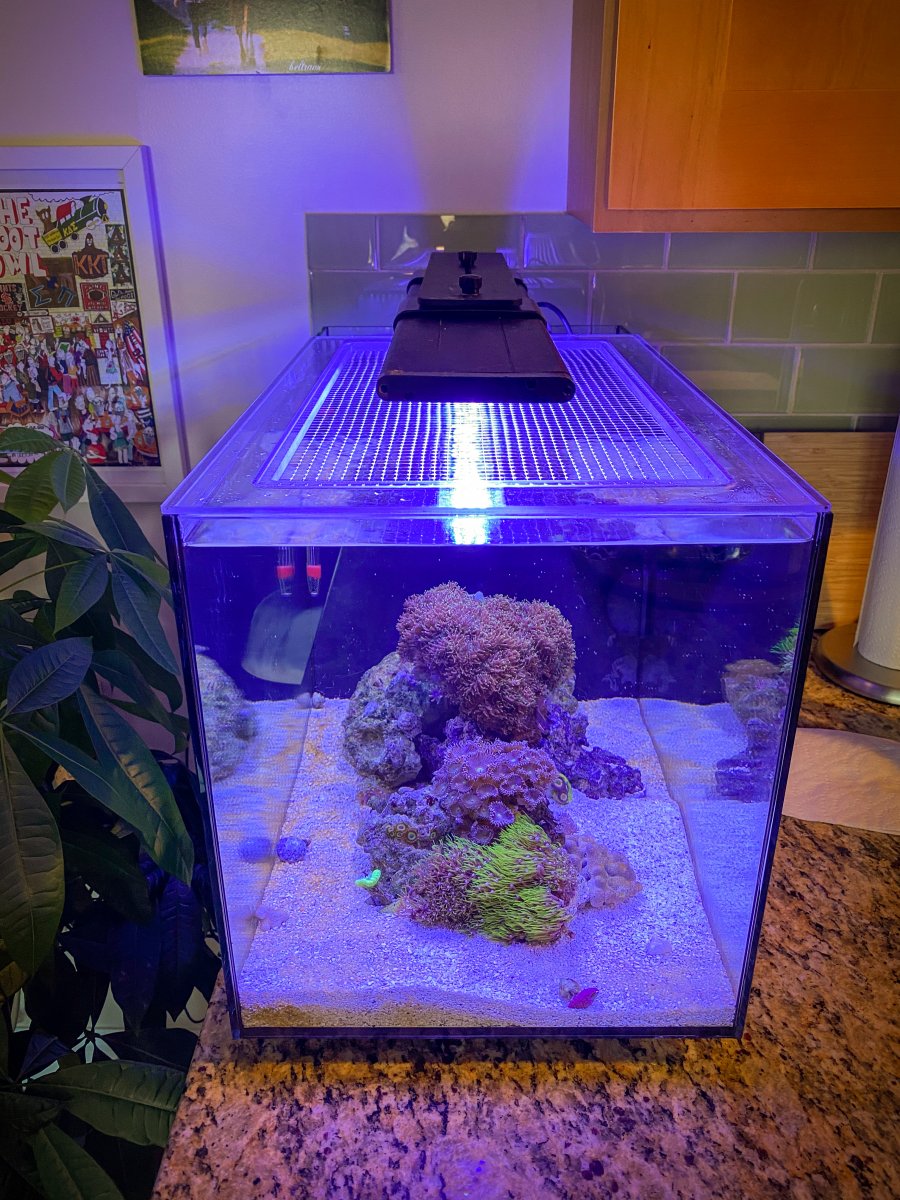 Love this, get a strawberry / red lip conch for the sand.
I upgraded to an Eheim 600 return and then added a 2000 lph powerhead, I like flow.
Following.
OP

najer said:
Love this, get a strawberry / red lip conch for the sand.
I upgraded to an Eheim 600 return and then added a 2000 lph powerhead, I like flow.
Following.
Click to expand...

Thanks! Still feeling this out a bit, so I'm not ruling out any upgrades to the flow just yet.

I'll look into the conch. I have a single nassarius snail which is pretty cool and does alright, but he could use some help.

jfoahs04 said:
I know a lot of people have this tank - do any of you not feel the need to upgrade the pump?

When I started this tank, I just assumed I'd be upgrading the pump pretty quickly. But now I really don't think I'm going to. The stock pump/nano wavemaker combo is more than enough. In fact, I'd argue that flow is too strong in some spots with the current setup. Who knows, maybe i'll feel differently when everything grows in, but I'm definitely all set for right now.
Click to expand...

I've had my Evo running since 2018 with the standard pump. I've not once felt a need to upgrade it, however I did remove the internal sponge from it which got nasty too quickly. Obviously there's a risk in running it without the sponge but I have floss in the prior chamber. I did add a powerhead for more flow in general, but obviously that does not increase flow through the filter which might be some people's motivation to upgrade.