Have I gone overboard with current flow

Hey guys just after some advice. I’m worried my clown fish are struggling with the water flow around my tank. I’ll post of photo of the layout but it’s a 2ft tank so roughly 20g/80 something lites.
I have a Tidal 55 which is rated to 1000Lph, and a Sicce 2000 which is 2000 Lph.
Which equals 3000 Lph, I was under the assumption it’s best to have around 30x the volume of flow which would be best for some corals.
I currently have 1 torch 1 hammer 1 bubble, also two hard corals I totally forgot the name of

Do you think I have over done the water flow ? Or will they adjust and be ok ? (Only has them in the tank for a few hours and they seem happy but constantly swimming against the glass and not in the rock formation)

Thanks in advance still new to this but loving it already 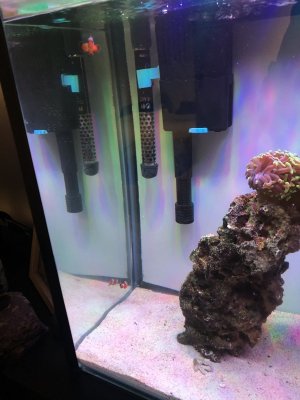 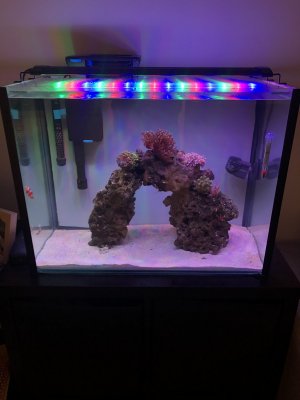 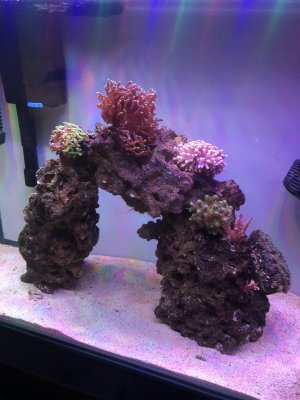 If there is one thing you should know about clowns it is definitely that these guys are real *****. You will provide them with nice rocks and anemones, however they will prefer one of the small spots where you don’t want them to be. Even evolution gave up on them as these ocean creatures swim like underwater bellydancers.

In other words: They are probabely fine with that flow. They will find a spot they like so don’t worry. The higher flow will be benificial once you have some corals growing like weed.

The clowns are new give them time. Some people have clowns for weeks that stay in corners of the tank. Luckily my two clowns found a spot in the rock in 2 days. Also I believe my clowns love higher flow my male will swim right into the powerhead and then stop and go for a ride across the tank sometimes.

Thankyou guys, I’ll stick with it and see how they go !

Aquaclear causing too much flow