I had a Fluval Flex 9g tank that I converted to saltwater on our kitchen counter for a year. I just had a few fish, zoas and mushrooms in it and it ran pretty much on autopilot. About 6 months ago my wife decided that she wanted me to make it a freshwater planted tank, so I moved everything into my Nuvo 30L and turned the Flex into a bonsai freshwater tank.

Now my wife is mad that I won't put an anemone in the 30L (too many expensive coral to risk it ) so, guess what... the countertop tank is to become an anemone tank! So says my wife!

Now, I also have a nephew that absolutely Loves my tanks. He has decided that he's ready for a small freshwater community tank of his own, so I jumped at the opportunity to "upgrade" my Flex 9g to a "real" tank and give him the Flex 9.

I'm a big fan of the IM AiO tanks, so I found a gently used Nuvo 10g for this build. Here's what I've got so far:

Stocking plans include a BTA of some sort, a few Rock Flowers, a pair of clowns, a hi-fin banded goby/candy stripe pistol pair, a few sexy shrimp and a CuC. That's it.

Since I planned to do a NSA type aquascape, I made special provisions for the shrimp/goby by building a tunnel under the rockwork with front and rear doors. If you look at the front view of the aquascape, you'll see the opening of the tunnel at the very bottom. Once I have the sand in the tank, it should be a perfect home for a tiny shrimp/goby pair. This will also ensure that I'll be able to see them on the regular, because the front and back are both visible.

Anyway. Enough talk. Here's what I've got so far... 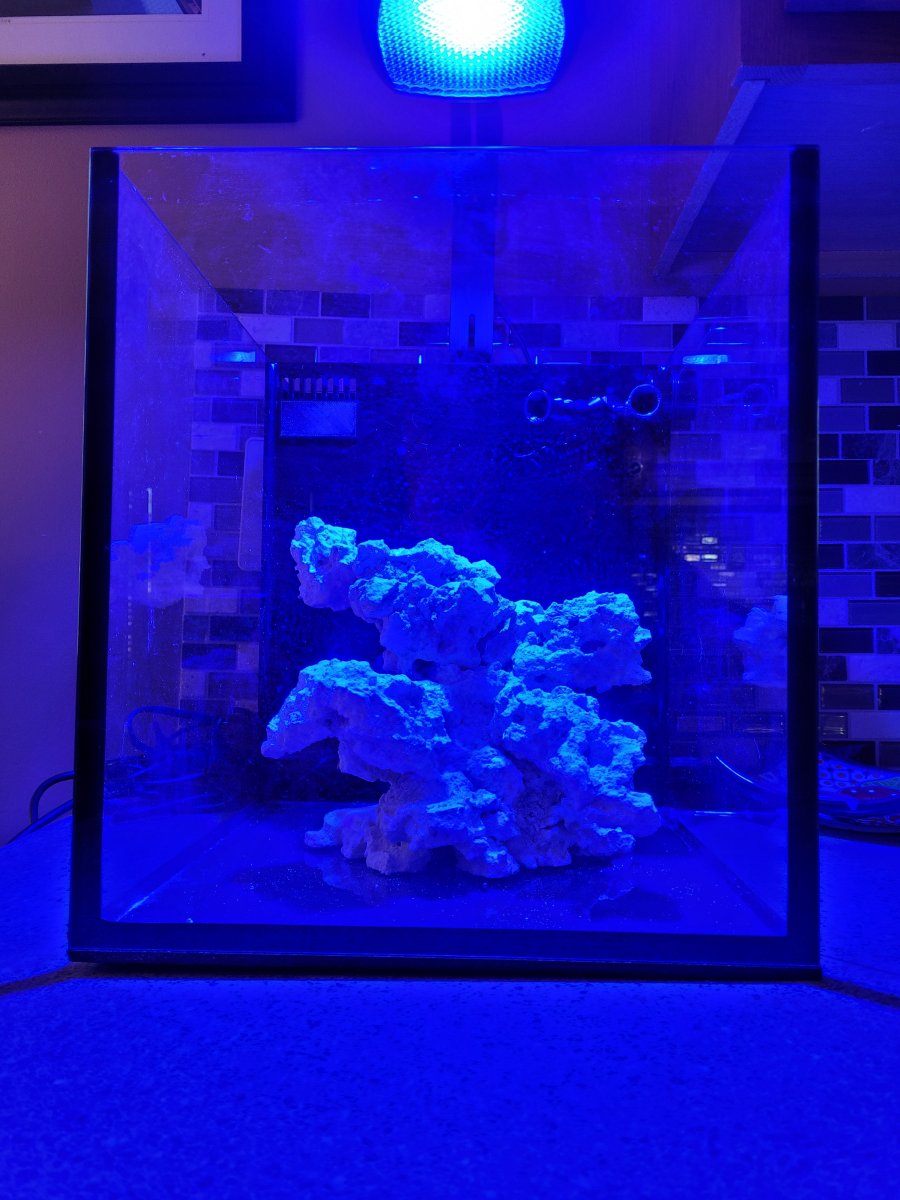 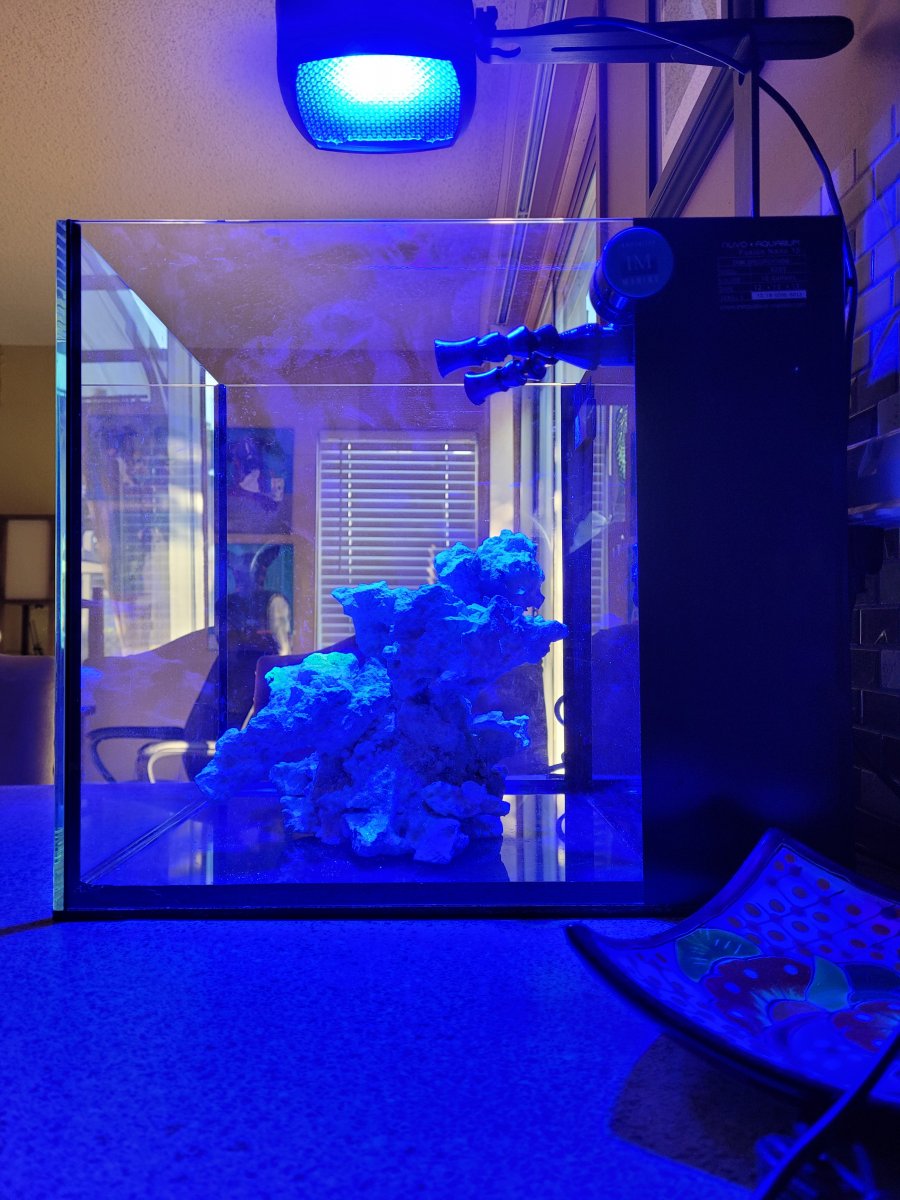 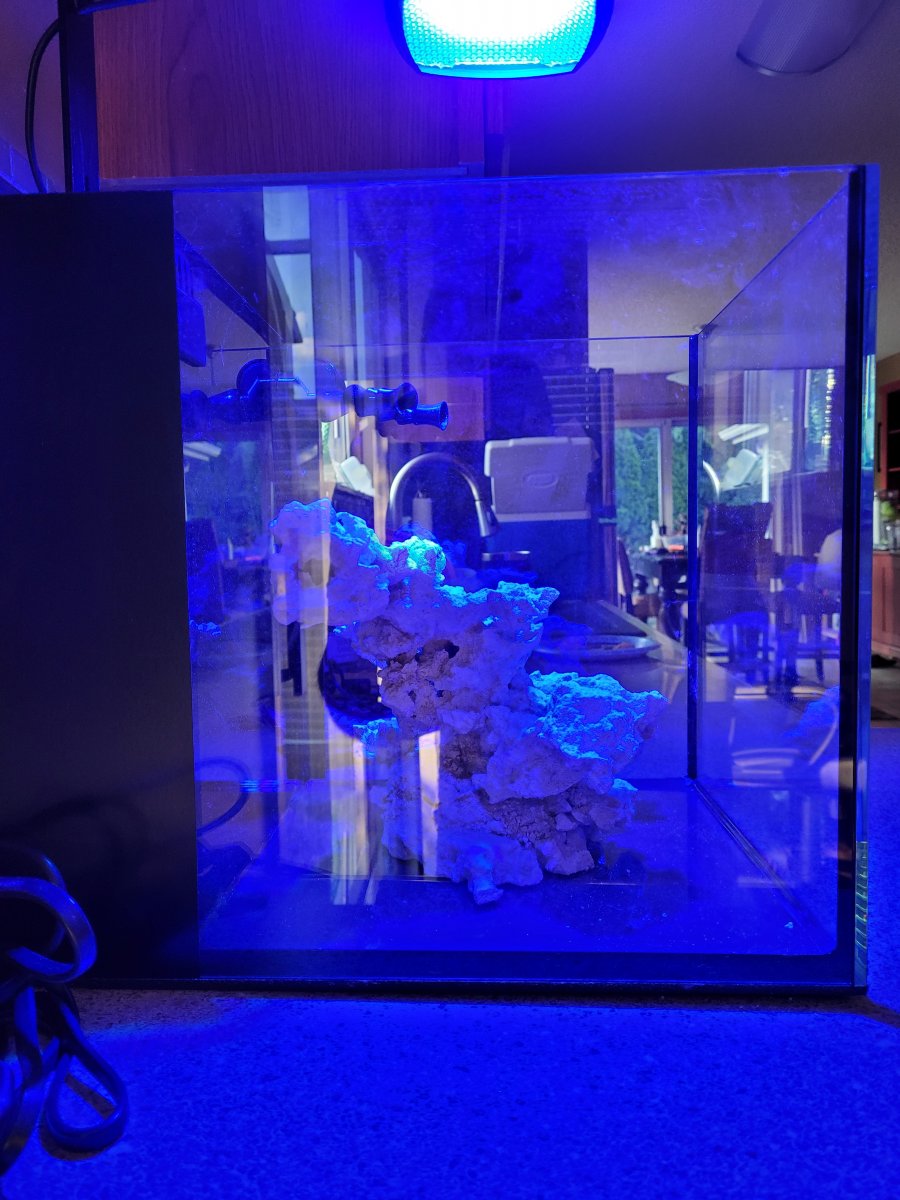 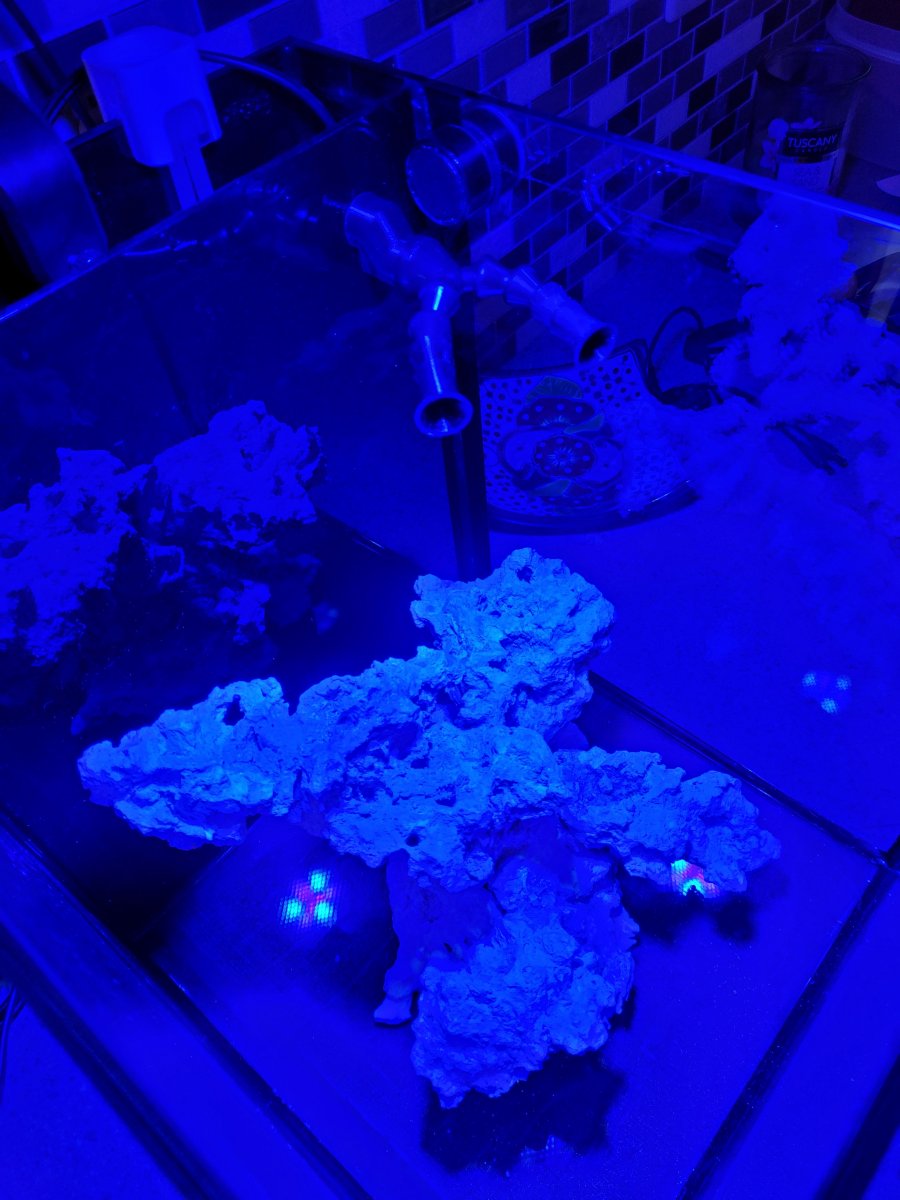 Since the tank sits on a peninsula/bar in the kitchen, I wanted nice views from all three sides. In addition to the shrimp/goby accommodation, I wanted plenty of high/low range on the rockwork for an anemone to find a happy spot in the light and flow. I think I accomplished those goals pretty well. I'm pretty happy with how the rockwork turned out.

I still have a few things to do to get ready for water, but I'm hoping the tank is wet this weekend! I'll update more then.

ETA: I plan on starting right off with the pair of tiny clowns as soon as the water is up to temp and salinity checks out. I've got some MarinePure biomedia that's been in the back compartment of my well established mixed reef for almost a year that I'll be adding to this tank to "short circuit" the cycle. I'll supplement with MicroBacter7 for the first week or two, but I don't anticipate even seeing a spike in ammonia or nitrite.

I'll also be cycling with the lights on so that I can get the ugly stage out of the way early, and have something for my CuC to eat since I'll be adding them pretty early on.
Last edited: Aug 4, 2021

Looks solid so far! I have always liked the idea of a small reef. I might consider a lagoon style nano and just take a rock from my main and job done

Looks good. I love the multiple ledges. A nem will be able to choose a very nice spot with those options.

Poof No Eyebrows said:
Looks good. I love the multiple ledges. A nem will be able to choose a very nice spot with those options.
Click to expand...

It's a shame, really. I'm an LPS/zoa guy, and I can already envision how I could pack that with some killer torches, hammers and zoas!

I'm really pretty stoked about how the rock turned out, though.
OP 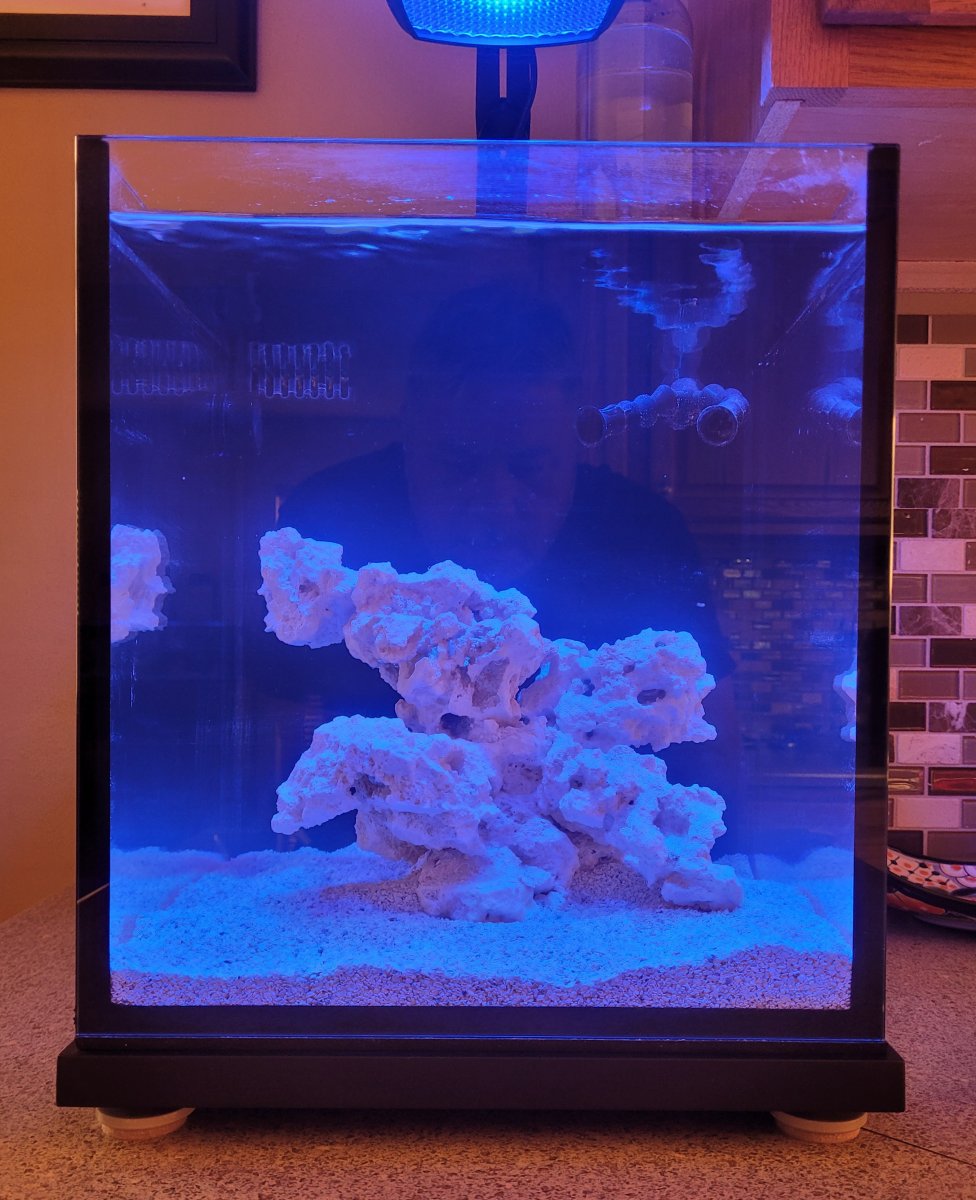 I dig the scape.

Doing well so far! My clowns and CuC are all fat and happy. No cycle to speak of and the diatom bloom came and went.

After a month, my parameters are steady with weekly 1g water changes, so I just added my first, small RBTA. It's currently walking around finding a happy place, so I'll update with a pic when it's settled.

I like your rockwork. I always wanted an anemone only tank but I am worried nutrient export. I cant wait to see your build.

I know everyones said this already, but that's an awesome scape!
J

Just bought a waterbox 10 cube yesterday. Come monday the nem tank will be in full swing! I kinda got the wild hair to buy the tank because of wwc instagram post yesterday of their waterbox 10g anemone tank
J 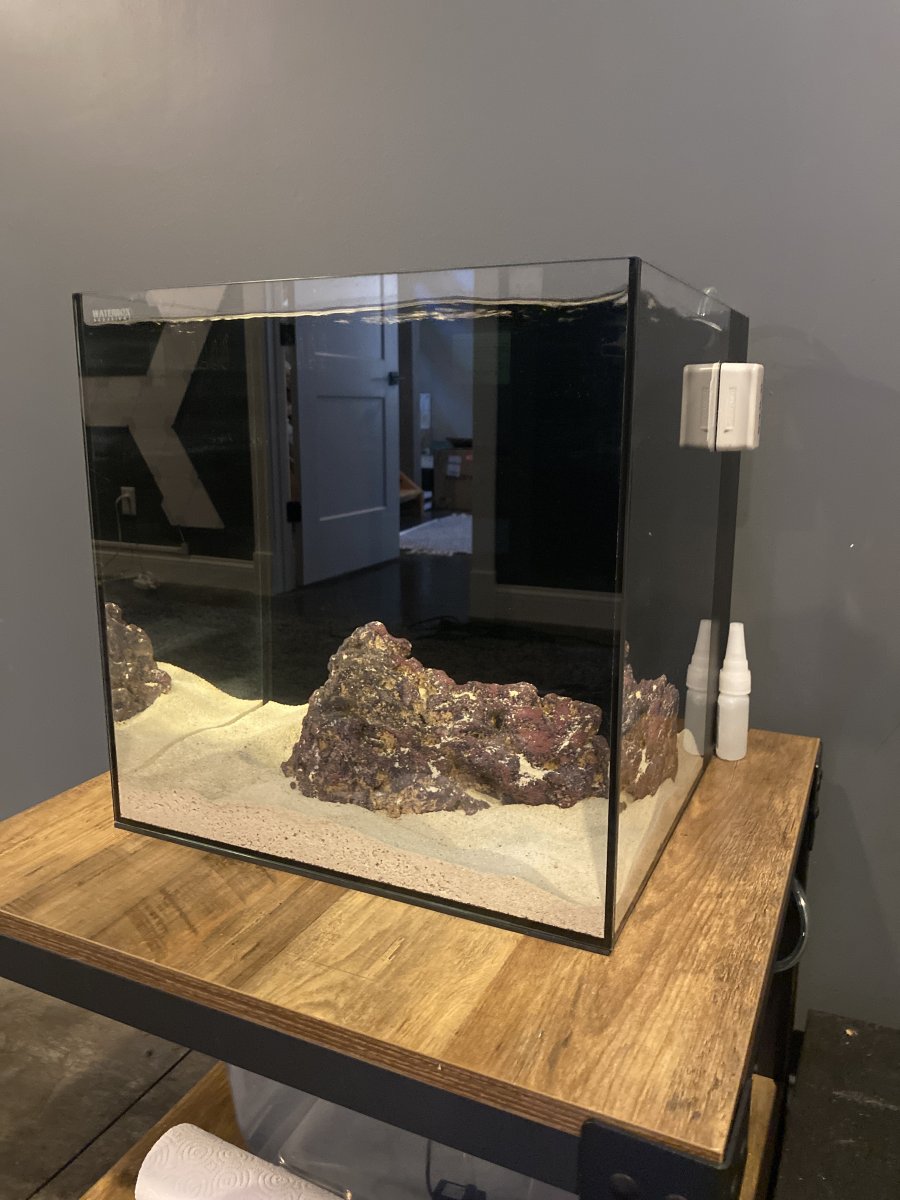 Whats up guys got my waterbox 10 all setup! ATO-xpaqua duetto,50w heater, and eventually gonna get a ai prime 16hd. Currently letting it cycle even though i put about 4 gallons of my established tank water in. I put some beneficial bacteria and seeded it with ammonia so now we wait! Cant wait to get some nems in this thing. Thinking about rainbow BTA.(sorry im not trying to hijack this thread just pretty stoked)

Just a little update on the tank progress...

My anemone ended up melting on me out of nowhere. I got a little too cocky, I think. I wasn't testing my water, I was just doing weekly water changes and I think the tank was actually too clean (No nitrate or phosphate).

Obviously, when the anemone went, the tank went to h*ll too. A tank this small can get sideways quickly, especially with an "event" like this. I didn't lose any fish or inverts, but a large water change led to a cyano outbreak that is just now starting to clear up. It's been 15 years since I last kept an anemone, and I guess I needed to relearn a few lessons.

Now I'm purposely NOT doing water changes in an effort to get my nutrients up to acceptable (detectable) levels. Once that happens, I'll reinstate my WC schedule and let things settle for several weeks before trying again.

Not a great update but, hey, that's why these threads are here, right? To let others know that sometimes, crap happens and it's not just you.
OP

Chris4reef said:
I like your rockwork. I always wanted an anemone only tank but I am worried nutrient export. I cant wait to see your build.
Click to expand...

That's the one nice thing about nano tanks... This thing only holds 7g of actual water. You can do BIG water changes and still use a 5g bucket!

Stuff can get sideways pretty quickly, but most things are only a water change away from "back to normal". My issue was that I was doing all the water changes, but I wasn't checking to make sure I actually needed to. Anemones (like coral) need SOME nitrates and phosphates to thrive. I didn't have any.
OP

So after not changing any water for a few weeks and STILL not having any detectable nitrate or phosphate, I started dosing a couple days ago. I'm using NeoNitro and NeoPhos, trying to get my numbers up to about 10ppm and .05ppm.

This is crazy. I've kept saltwater tanks since 1992 (with a 12 year break in there), and I would never, ever have thought I'd have to dose nitrates and phosphates. But, here I am!

So it looks like its been wet for about 3 months now, what is your plan as far as when you plan to stock the tank? Do you plan to follow the "6 month rule" (more of a suggestion in my opinion) that everyone always talks about or just waiting for parameters to settle out and become stable?
OP

I still have my pair of small Snowflake Clowns in there, and my CuC is doing fine. Evidently I don't feed them enough to make an acceptable level of nutrients for a weekly waterchange schedule. So, I'm slowing down the water changes to get my nutrients up. Once they're where I want them, then it's anemone time!

I started the tank with media from my other tank that has been running over a year. I cycled and maintain that tank with Microbacter7, so the little tank never really had to cycle, and everything has been "stable" pretty much since the day I set it up. I just got cocky and was doing my water changes without testing much of anything. My nitrates and phosphates were basically 0 for the last 2 months... Which caused a bunch of OTHER issues.

But, I'm coming out the other side now that I'm paying closer attention. There is a local reef swap this weekend. Who knows, maybe I'll find a nice anemone there.