Yeah I have my vendor for the power cords looking into longer ones for the L8/16 because the width is more and power supplies cord is shorter (the Meanwell LPV). I can send you a set of ~3' extensions for each power supply

Do you know what kind of flow you are able to push through the L8? I have trouble running more than 250 GPH through mine.

Do you have an update on when new side pieces and screen bar for my L8 might be available, +1 on the short power cables on the L8.

While I am thinking about it the cords from the Led units to the connector could be longer on the L8 so you can have the actual connection sitting away from the unit and additional 12" would have been great.
OP

@Jonty what pump are you using? I can send you cord extensions as well

Something doesn't seem right....at 250 GPH you should hardly be coating the whole screen with water.

FYI I've flow tested the L2 at >900 GPH (measured) so it's not a flow restriction issue, unless you are using small tubing. Are you using anything smaller than 3/4" ID hose?

I am using 3/4" flex, one of the club members with the L4 you delivered the same weekend is having the same flow issues as well. he is also using a flow meter to confirm actual throughput.

The other thing I noticed is that the unit goes to the emergency drain even with just over 250GPH?

Jonty said:
The other thing I noticed is that the unit goes to the emergency drain even with just over 250GPH?
Click to expand...

What sensor size? and does the apex have the sensor size detected correctly? I have a feeling you are getting more then 250gph through that. Is your main drain closed off?

I'm using a cheap AquaTop swp-2600 740gph with 7' head max that I picked up from my LFS Friday. It definitely seems like more flow then my smaller rio 1700 640gph 8' head. I'm trying to get a 1" flow sensor in to hook up. But my main drain is fully open and nothing at all is coming close to going to the emergency overflow.
OP

@Jonty the drain system is designed to be a tuned siphon. That's what the couple with the flap and thumbscrews is for - do you have that installed? Also you have to plumb the drain so that the pipe terminates below the water surface.

This combination allows the drain to operate as a siphon, and that pulls a lot more flow than an open drain. Without that, you will get air occlusion into the drain and it will typically either get partially airlocked (which would cause water to flow into the emergency drain) or it would start to siphon and flush.

You might get a trickle of water into the emergency drain, but it shouldn't be more than ~10% when you have the center drain tuned and running ~400 GPH

Thanks for the point to the TCMAS thread, I posted there too

I haven't tested this pump in particular, but what I do know is that not all pumps are the same. The flow curve on that one seems to say it should be fine...really odd. I might expect a 50% overall flow reduction (which would bring that down to about 600 GPH but 350....something's not right...hmmmm...maybe hook it up to your car that's an inside joke. Let's just say when I met up with him, there was no mistaking that it was him pulling up

That is exactly how I have my drain setup but even fully closed it produced tons of micro bubbles, how far below the water should the drain be?
OP

You're going to get microbubbles for at least a couple of weeks after starting it up, these will start to wane over time. A new screen will tend to "churn" up the water as it falls over it, infusing air into it very easily. As algae grows and fills in, the flow will become more "smooth". Also, the box itself will build up a coating over time that will smoothen the flow. This is kind of the same effect that you see sometimes with brand new PVC piping on a new system - the pipes have to "slime up" a bit, and until then, you get microbubbles. But, for the scrubber, that is what the filter sock is for.

If you scroll to the bottom of this post https://www.reef2reef.com/threads/introducing-the-new-turbo-algae-scrubber-rev-4.212728/page-11#post-2758422 you can see how I recommend that this is installed - the pipe should terminate about 0.5-1" below the surface of the water. Then you place the coupler (flap/blocker) over the end of the pipe and tighten it down. This should result in the top of that coupler being pretty close to the surface of the water. Now you slip the filter bag/sock over the thumbscrews and cinch it down just enough so that it doesn't fall off. This should also be right below or near the surface of the water. This way, the water can flow out of the bag - the purpose of the bag is just to trap the microbubbles, not to filter anything.

Here are some videos, to be honest I thought your valve was a joke and have just dismissed it I tried as recommended and deeper and it did not work also pics of the screen with the 275 gph flow.

Also this tells me that maybe you are trying to close the valve to reduce the bubbles - and that might be what is causing the excess flow in the side drain. You want to adjust the valve such that the water inside the box is at a relatively constant level all across. What I mean is this: The waterfall off the screen will pool up on top of the false bottom and then go across it both directions, then the flow will wrap underneath it.

Adjust the flap/valve such that the water level at the ends of the Growth Chamber is at about the same level as the water falling off the end of the False Bottom. All you need to do is remove one of the end cover plates (the one that is opposite the side drain, so you can easily see the flow) and then open the valve until it drops too far (causing air to get sucked under the False Bottom) and then gradually close it so the water level rises up and matches the level on the False Bottom (which should be about 1/4" to 1/2" above it). That's it, this should result in nearly zero flow out the side drain.

You will start to get flow out the side drain when you build up a mass of algae that goes into the 3D growth stage, but that's a ways off

Thanks for the call!, fitted a ball valve to the outlet and trimmed to zero bubbles now
OP

Glad I could help! Now, to test out that Sicce pump for myself. Something is amiss when a 1300 GPH pump reads 350 GPH on a flow meter....

Yeah, it should be pushing over 500gph

Slapped together a new mount for the L8 with light stoppers. My sump is pretty high and it's hard for me to see in if the LEDs are lined up right as at least on the L8 there's a vertical cross brace that's designed to go between the led clusters.


Emergancy drain is right close to the edge so the cross brace is set back for that one. 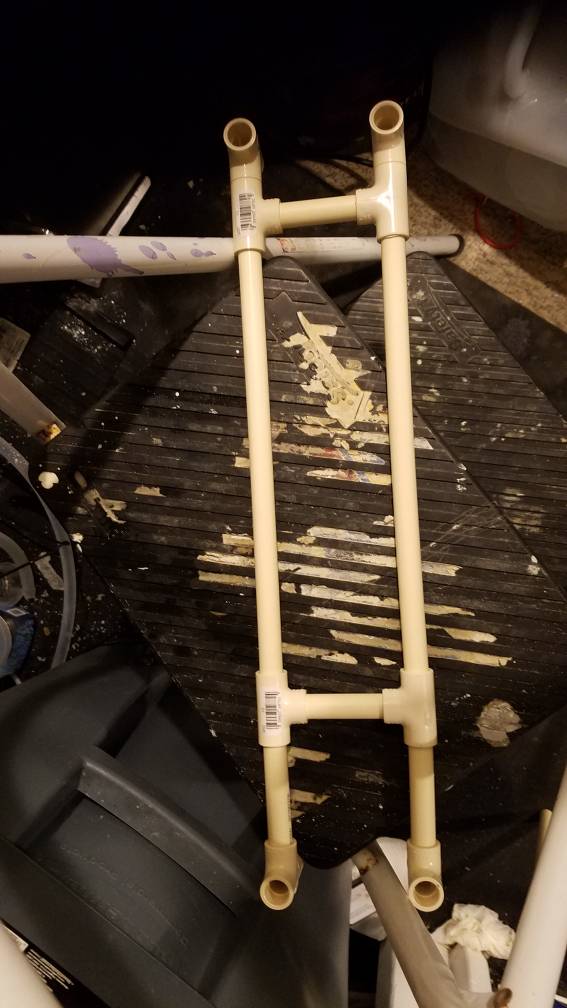 Led stops so I know they are lined up and I can still take off and on that side plate. 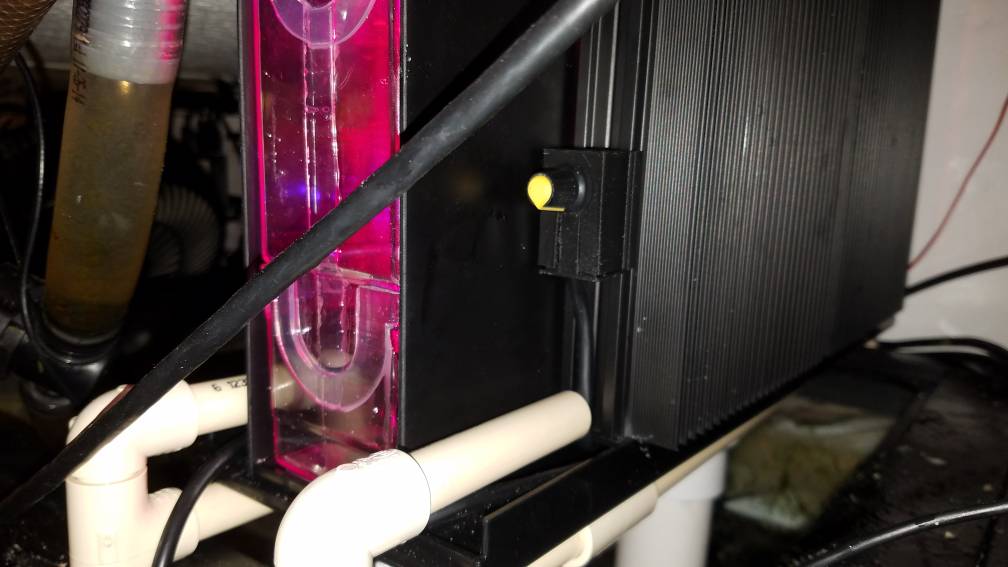