Here are a few pics of what my screens look like post-harvest, hopefully this helps you see what I mean by removing the brown gunk/mulm 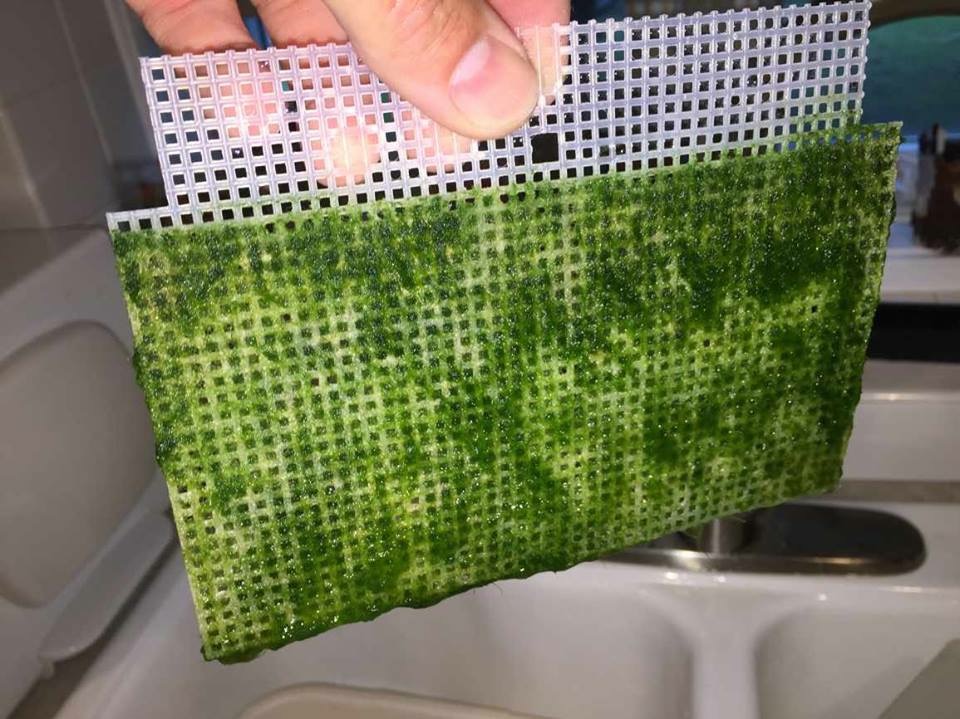 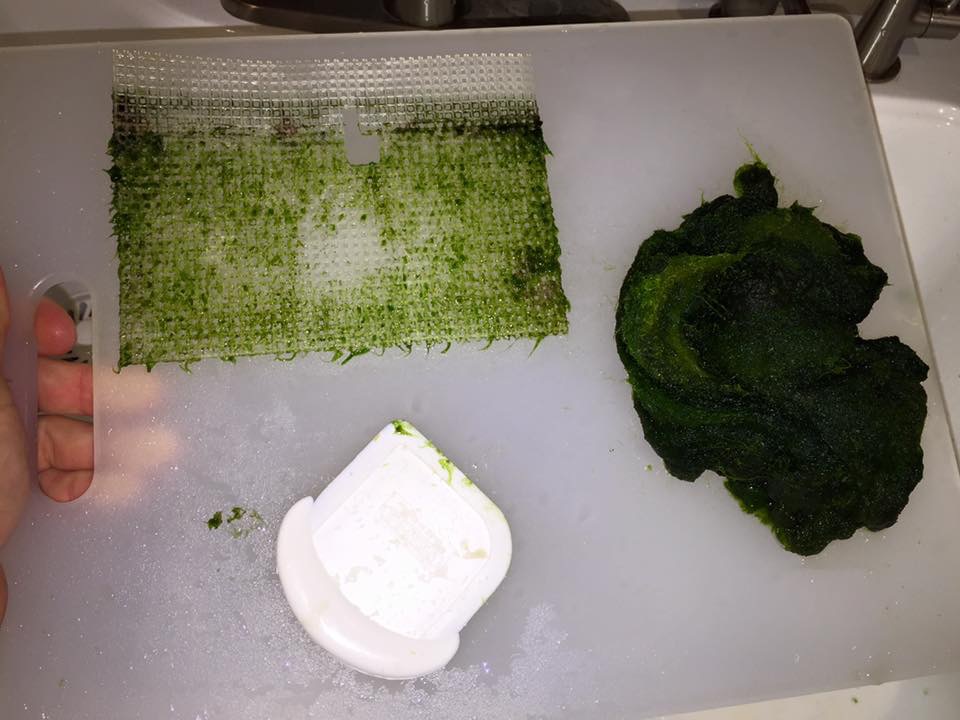 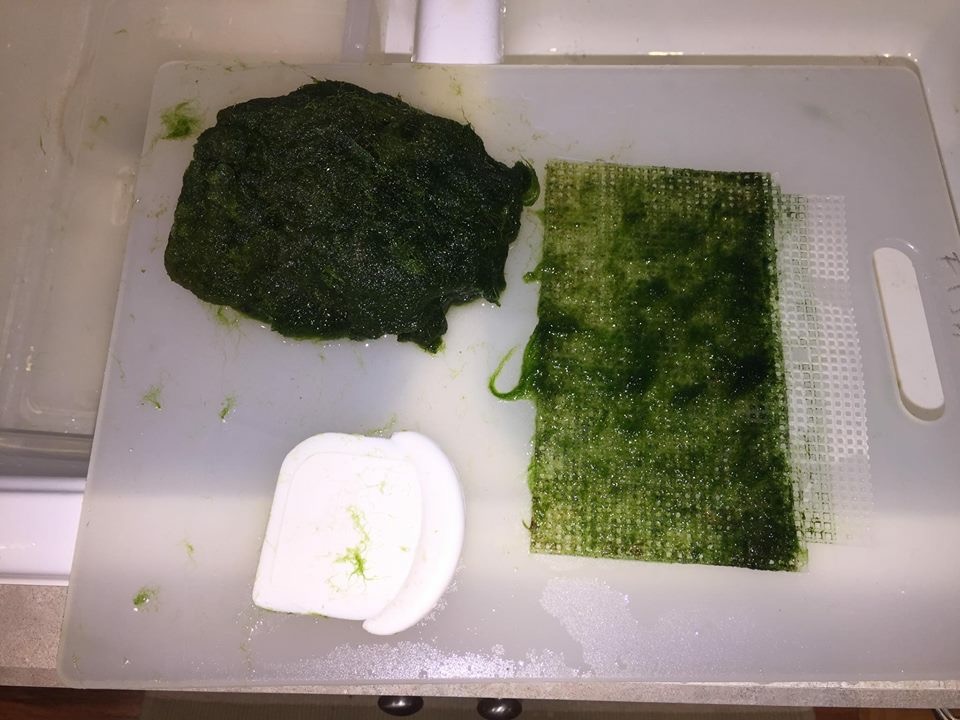 The point it, if you can see some of the white/plastic clearly exposed, this is not necessarily a bad thing. You just don’t want to intentionally scrub it so that it all looks like that

Let’s say you haven’t ever rinsed the screen - you might end up with a layer of this brown growth that is actually somewhat firmly attached, and refuses to come off with a simple rub/rinse type of cleaning. In this case you may actually have to use a brush. But not the stiff bristled one, only use that in the top edge (where the screen was not roughed up or coated with mortar)

Use the soft-bristled denture toothbrush and lightly swipe it across the screen (in a dragging motion vs a back & forth scrubbing motion) while rinsing under room temp tap water. Start with very little pressure, make a pass across half of one side of the screen then compare before/after. It should look like more of a mixture of white & green, similar to the pics above, but that might take a few growth cycles to get it looking closer to that.

makes sense....but to be clear...I'm going to give the screen a cleaning today, with the goal being to get rid of the brownish stuff as much as a i can at all costs? so if it doesn't wash off under a rinse, should i use the cleaning brush to really get it all off?

also, with regards to flow, right now i have my pump on a valve which is limiting its full power. i'm getting flow across the entire screen, but should i increase the power ? can an ATS have "too much" flow?
D

sorry, i didn't see you additional post last night, that answers my questions on the cleaning, thank you! i'll post a pic of my screen after i clean it today.
OP

As long as you have flow across the entire screen, you’re good. Yes, you can have too much flow. I’ve backed off on recommending flow higher than what it takes to get full coverage (which is typically less than the 35 GPH/in guideline)

35 GPH/in is likely the max for most cases.
D

heres post cleaning. i tried to scrub out any brown areas. LMK if you think i did too much/ not enough or just right? 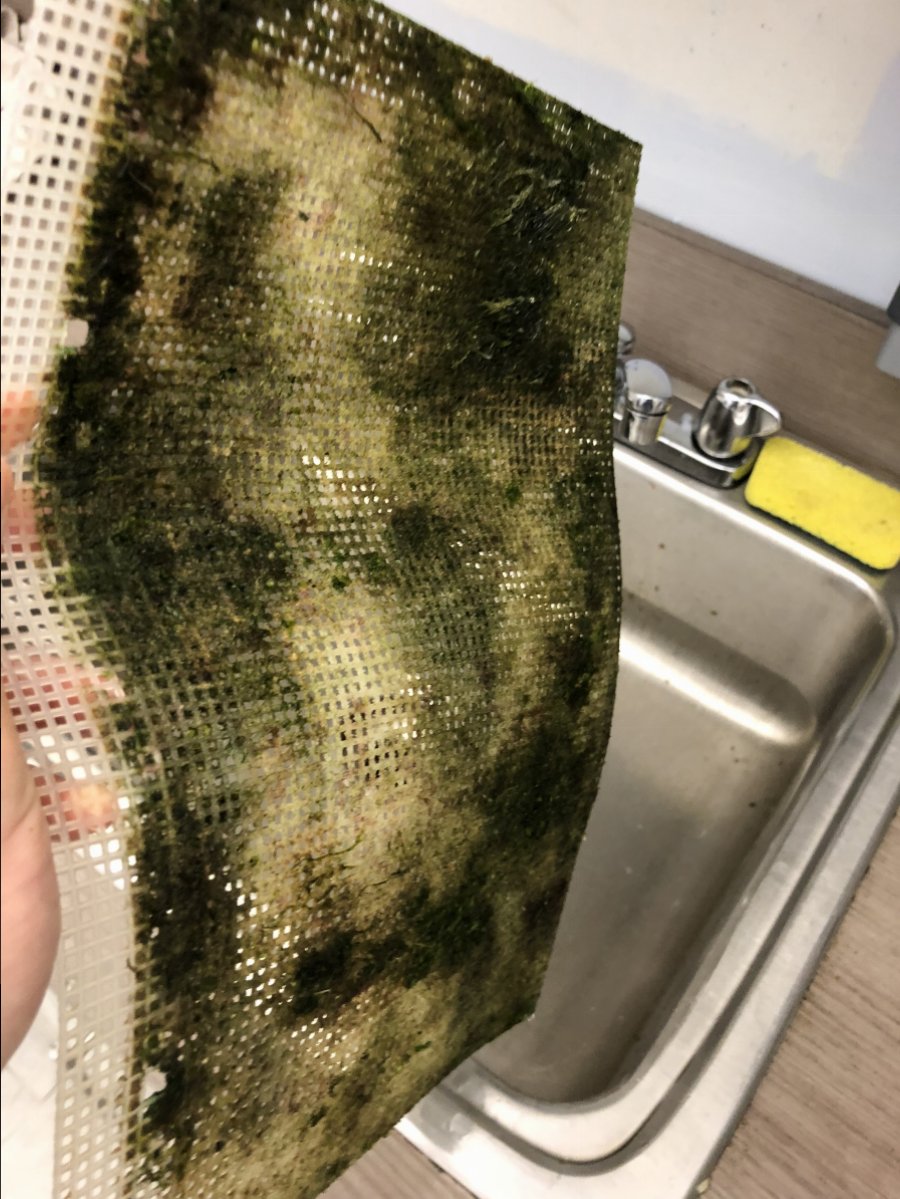 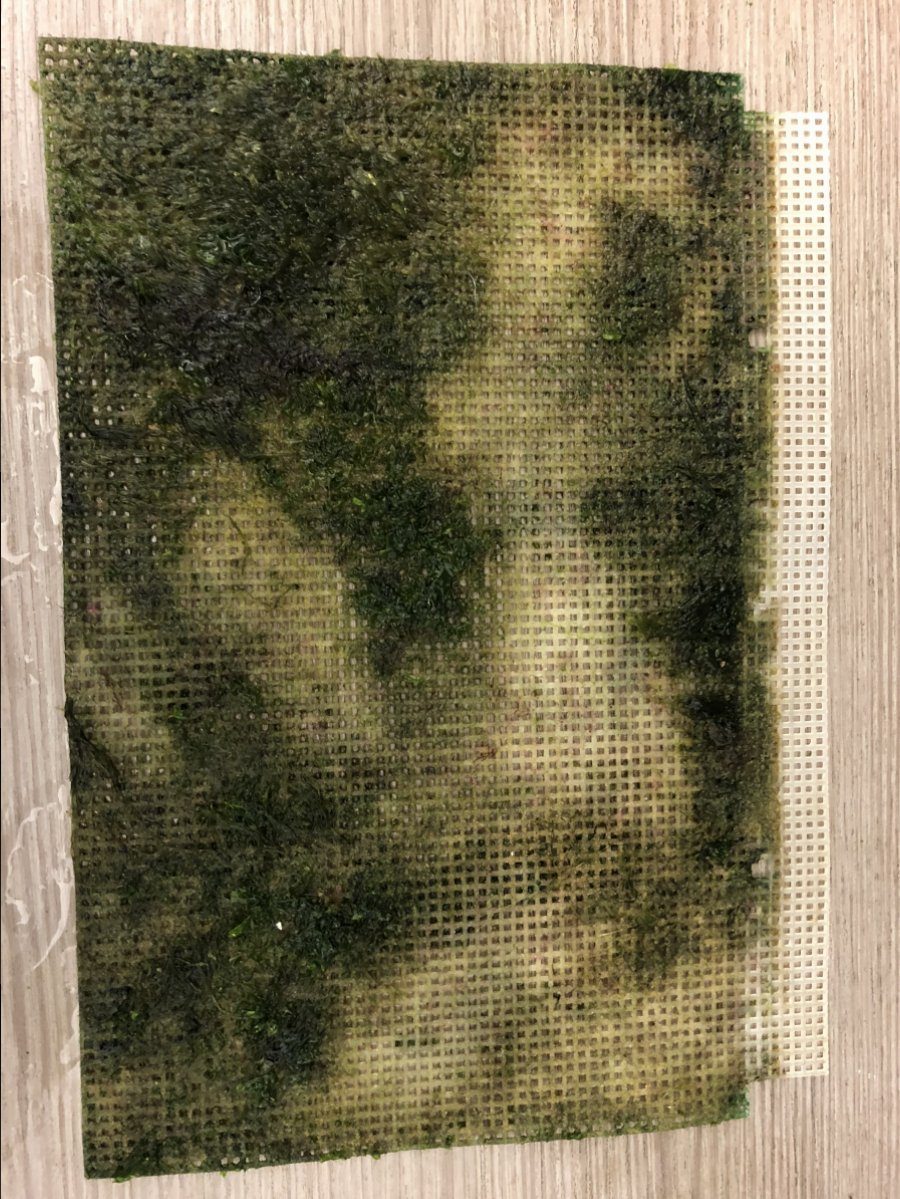 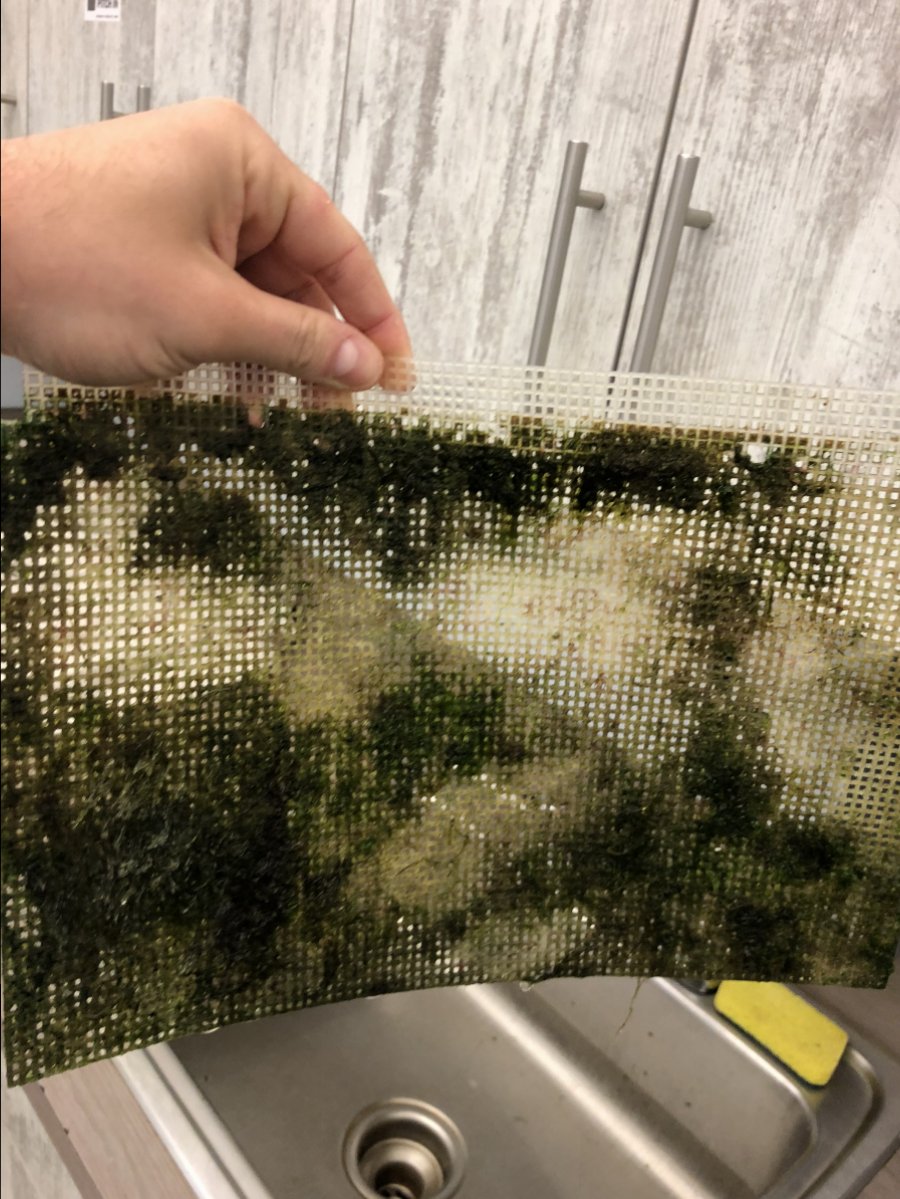 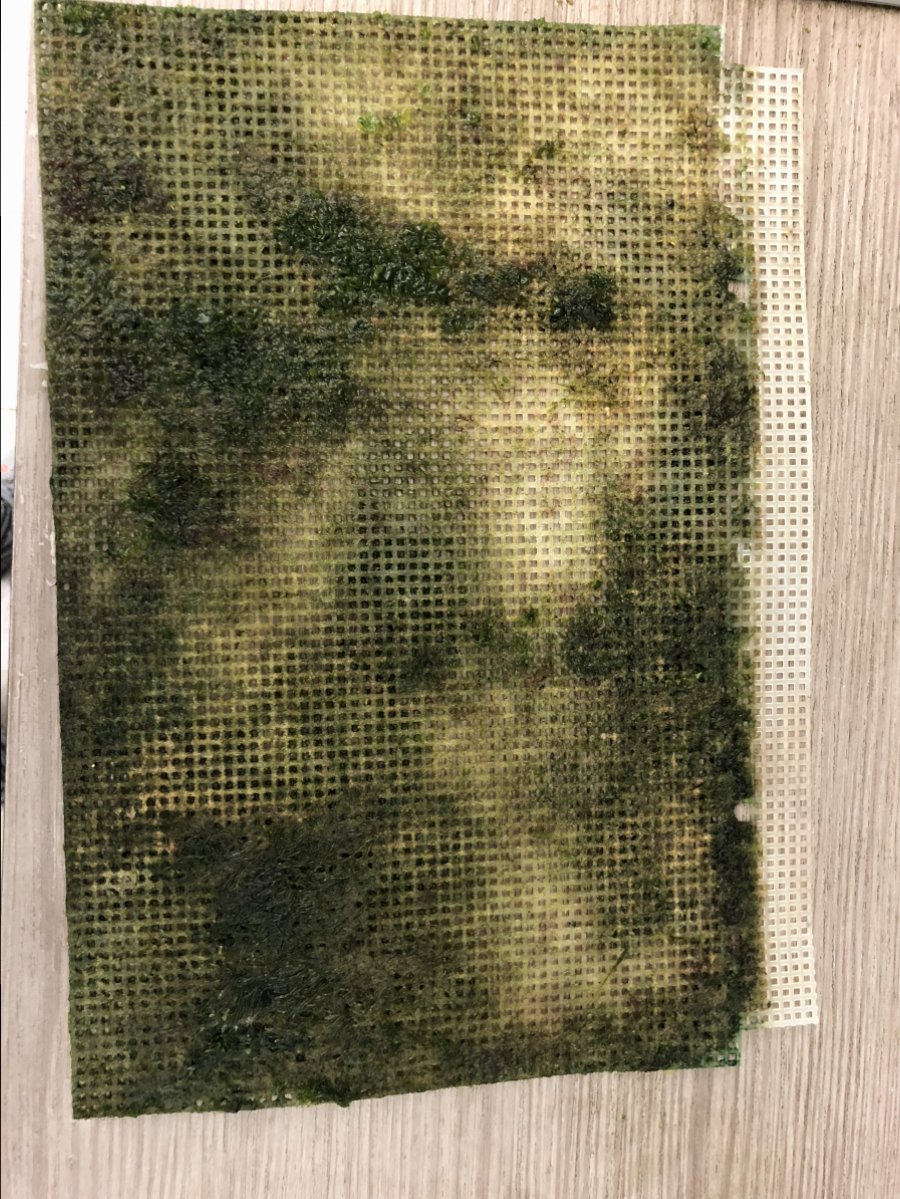 also, not sure if theres a good answer for this, but why is mine a dark dark green vs the nice bright green your getting
OP

That's just about right at this point, you did it right!

dannyt said:
why is mine a dark dark green vs the nice bright green
Click to expand...

I get a mixture of different colors, and over time I have seen shifts in things like the colors, density, type, etc...growth depends on the system so it's very difficult to make a comparison between systems and draw a conclusion from it - at least, if the only thing you're comparing is a few pictures.

The growth on my scrubber was pretty dark green and dense for a good couple of months, and there was a layer of brownish-reddish slime over the top also (that rinsed away easily). Then over the course of maybe a month, it shifted to a thicker lighter growth and the slime layer disappeared.

Although I don't have any direct lab evidence that it happens, it appears that a tank that has never had a scrubber on it before goes through a "conditioning" phase or sorts, and the scrubber will go through a few different stages of growth. If you start a new scrubber (or a new screen) on a tank that already has had a scrubber running on it, you don't see these stages - the scrubber "matures" faster.

Here is my L3 after 20days. I try to clean it on the 15th/1st but with the holidays I got behind. 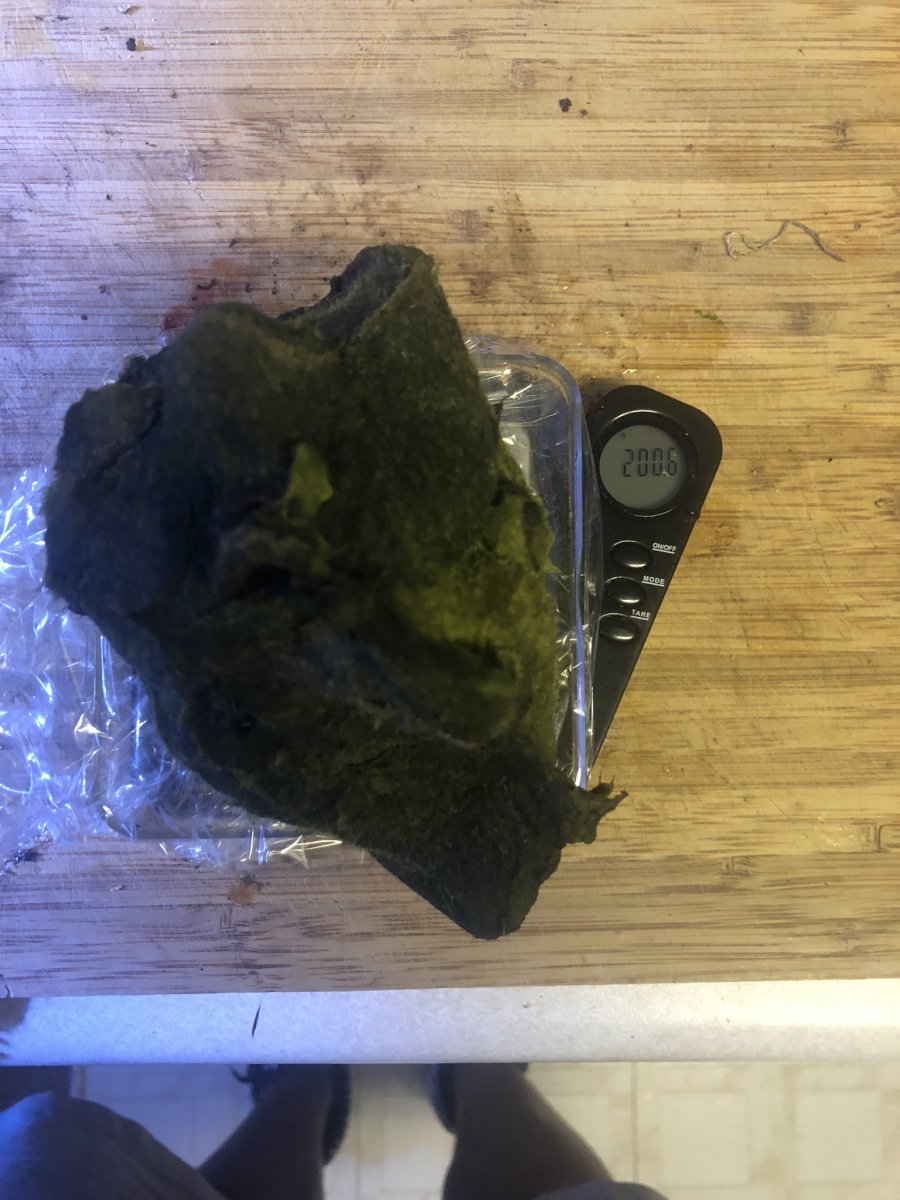 Yes!!!!
The thing is awesome

Hey Bud, whats your current turn around time with the ramp up?
OP

Sorry @Mattiejay6 I seemed to have missed your message, I'm still sort of shifting gears, taking over my engineering firm and becoming the only full-time employee, purging old stuff (five, yes, five 20 yard dumpsters...), moving, and getting situated took up the majority of June, so I barely got through my paid backog before leaving for my annual week off over Independence Day. I haven't had time since getting back to take a new batch of orders, but now that the business move part is over, I am prepping to take the next batch of orders starting next week. I would get a support ticket in and get on the list!