Luck be a Lady

Today. Still a lovely diatom bloom in the reef. I did notice a new polyp on my paly though I am now up to 13! My crypts are getting pummeled In the 29 I’ll have to fix that when I don’t feel like I’ve been beaten. If they melt they’ll come back eventually. Main worry is today my female
Palli is flashing and has knocked some scales loose. She’s clearly not happy and I suspect velvet. My heater is also failing on this system, it’s a little chilled. So I’ll probably pull the Sunsun heater from the hermit and switch em out for the time being. 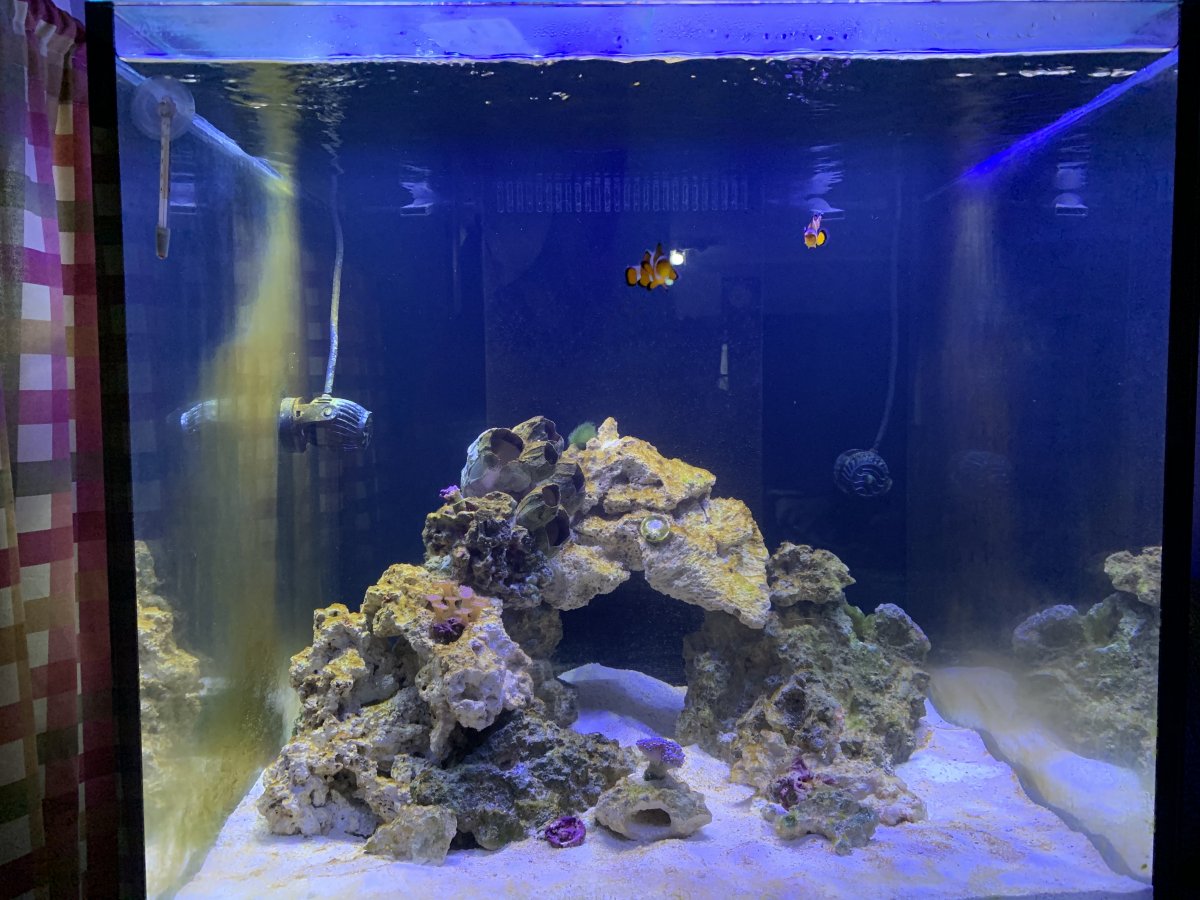 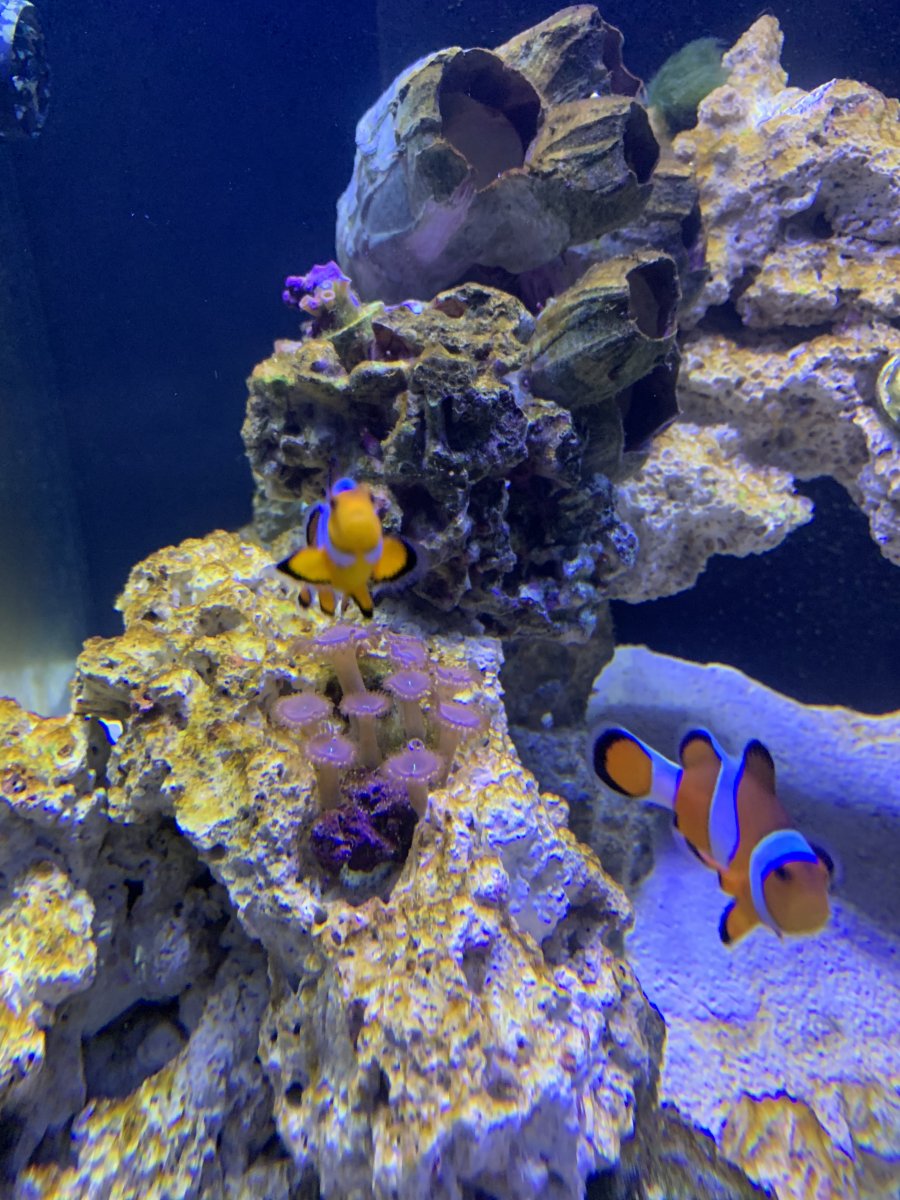 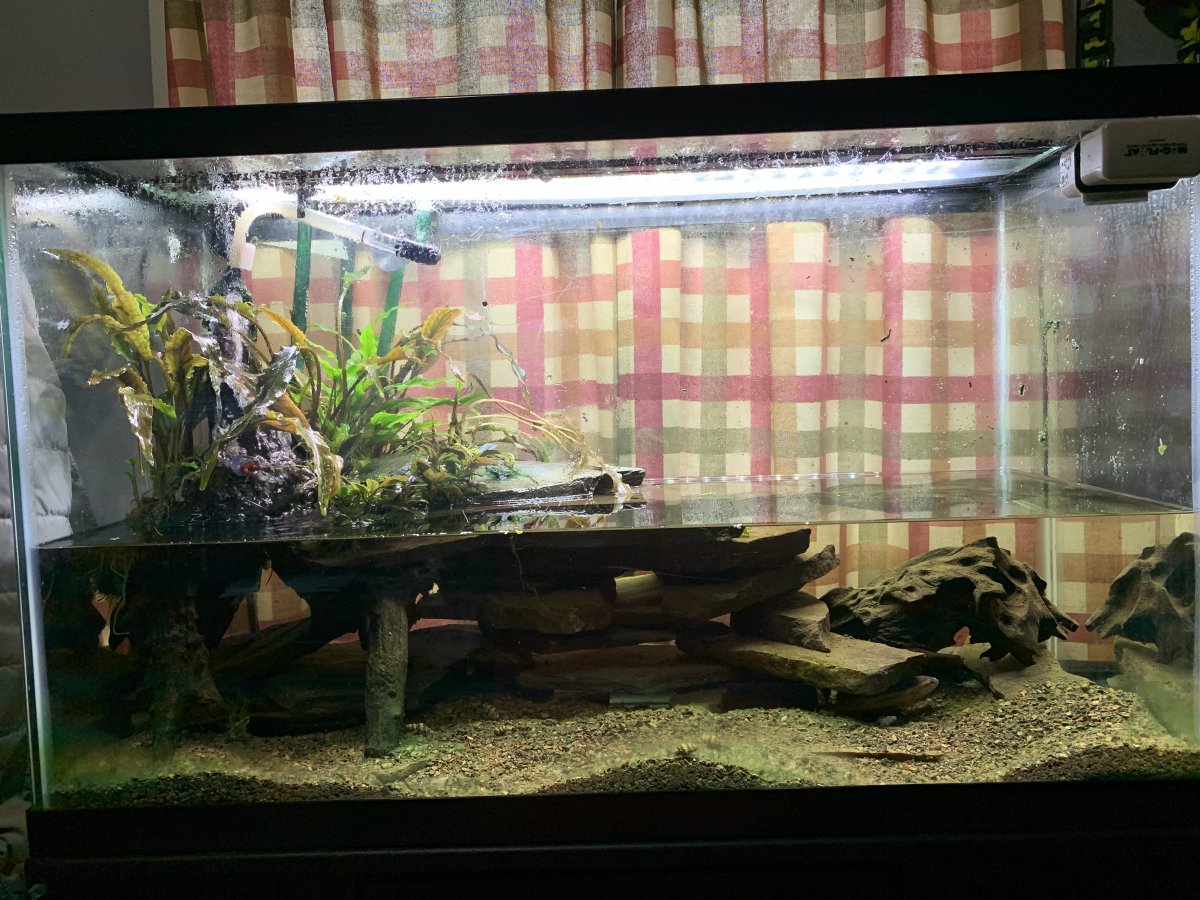 The Brady’s called. They want their curtains back
OP

NY_Caveman said:
The Brady’s called. They want their curtains back
Click to expand...

Don’t be jealous of my awesome curtains.

I really do love them, ya know.
OP

I have short windows, and all the curtains I could find were either the kitchen curtains with the valance or 80” long ones. Floor to ceiling isn’t even 80” lol. So when I saw they had four sets of these at the dollar store I had to get them. I love the colors, and at the time they matched the furniture decently. They do brighten up the joint for sure. Plus the bettas seem to like them

LadyMac said:
I have short windows, and all the curtains I could find were either the kitchen curtains with the valance or 80” long ones. Floor to ceiling isn’t even 80” lol. So when I saw they had four sets of these at the dollar store I had to get them. I love the colors, and at the time they matched the furniture decently. They do brighten up the joint for sure. Plus the bettas seem to like them
Click to expand...

I like your priorities! Spend the money on the fish tanks and pick curtains that make the fish happy!!!
OP

Peace River said:
I like your priorities! Spend the money on the fish tanks and pick curtains that make the fish happy!!!
Click to expand...

I love my grumpy fish. How could you not want to make that face happy? 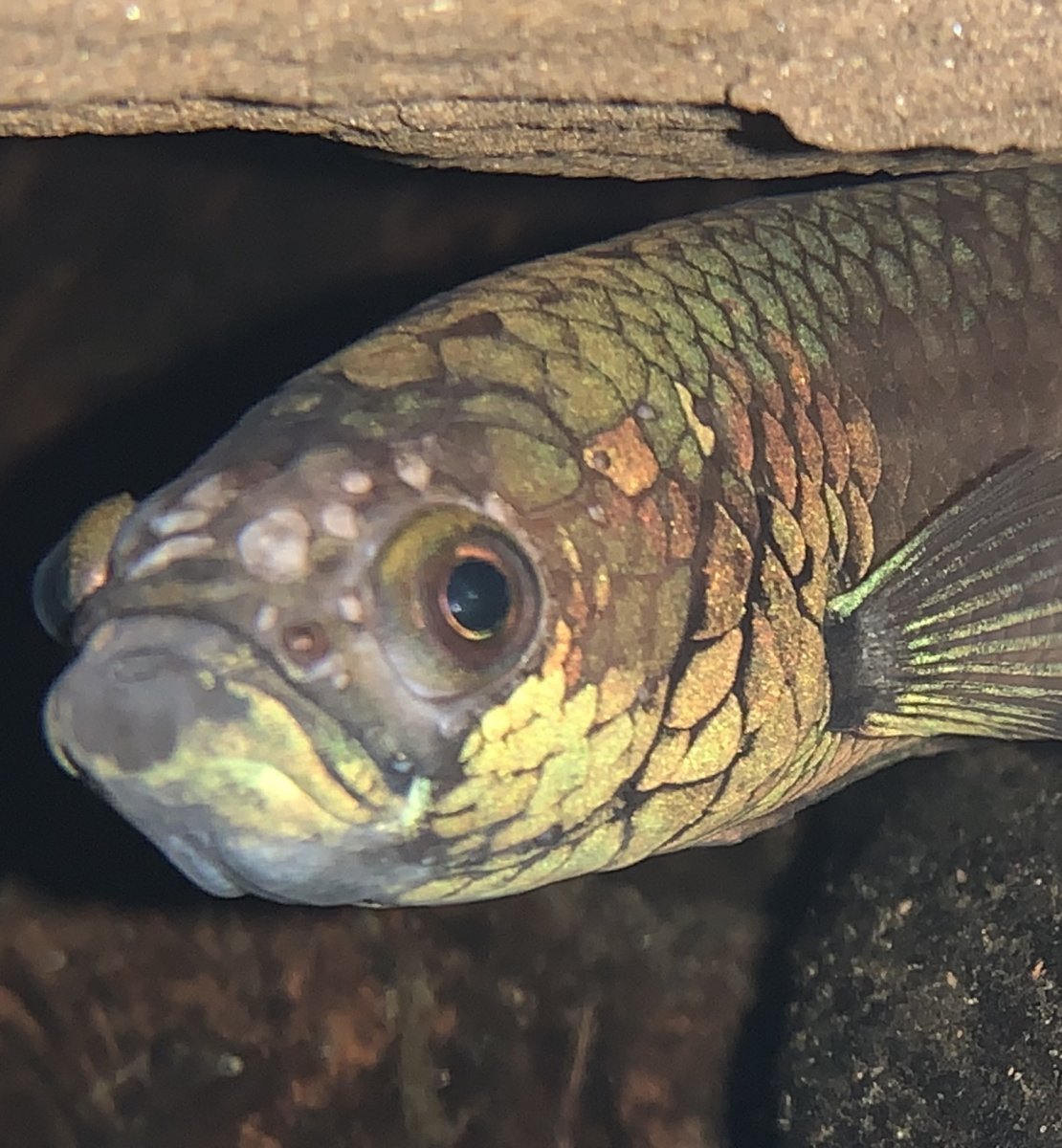 My small update of the day:

I’ve had a piece of plexi over the rank and two pieces of glass. Who knew that the original ebi tanks had glass backs that, when out side by side were the perfect length for this tank. I’m going to see if mom will take me up to bargain hunt. They had a 24” canopy up there a couple weeks ago. If I recall it was ~5 bucks. I’m going to see if it’s still there. If so, depending on the cost I think I can use it with the two glass pieces I have to make a lid for the tank. My main issue will be getting it to not slide. That’s something I’ll have to figure out later. I know people frown on glass as opposed to screen but everything seems ok.

On the freshwater front, yesterday my pallifina didn’t eat. I’m not certain if it’s age as I have no clue their life expectancy(and for some reason when I asked I had at least 70 people like/love the post and not a single answer :/ ) or if she’s upset with the flow or if she’s not well. As a precaution I dosed some methylene blue. Will see if she eats today. That spot on her caudal is getting larger. I’ve looked as well as I could and don’t see anything in or around it so I really feel it’s a tumor. It goes all the way through both sides. Her boyfriend is always in good spirits. I got a decent photo of him yesterday. Look closely, you can see teef 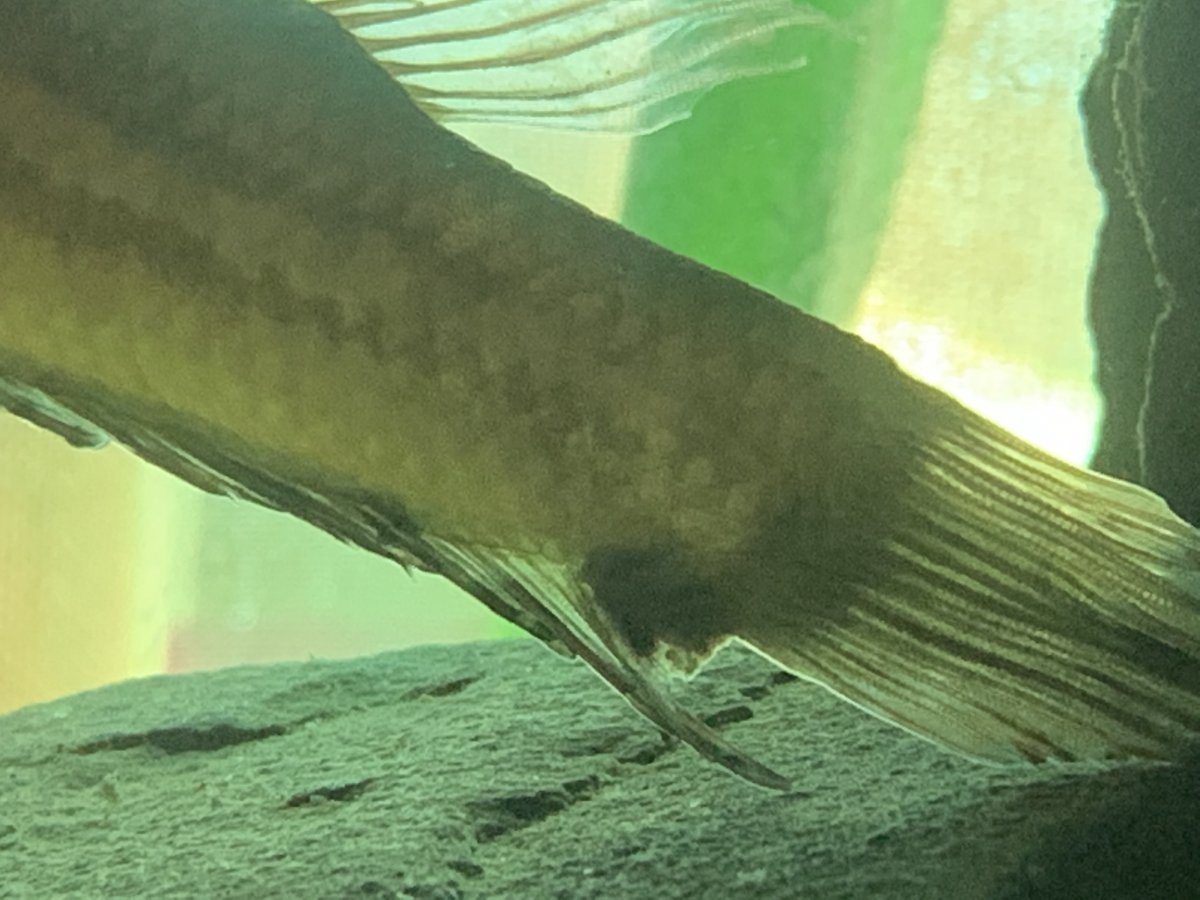 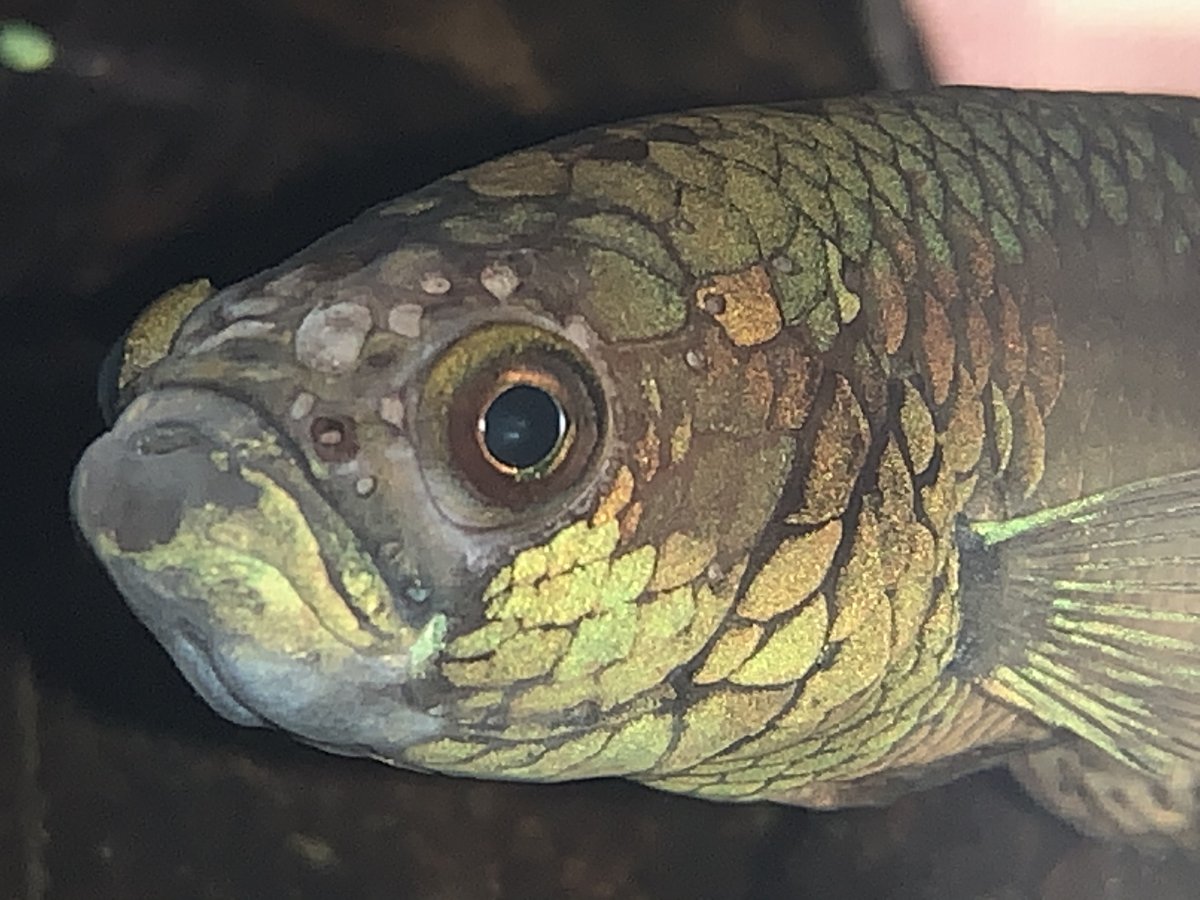 Ah that wonderful yellow hue lol. I’ve neglected to baste off the rocks the past few days, and the barnacle is just as shocked about it as most of you will be too XD. 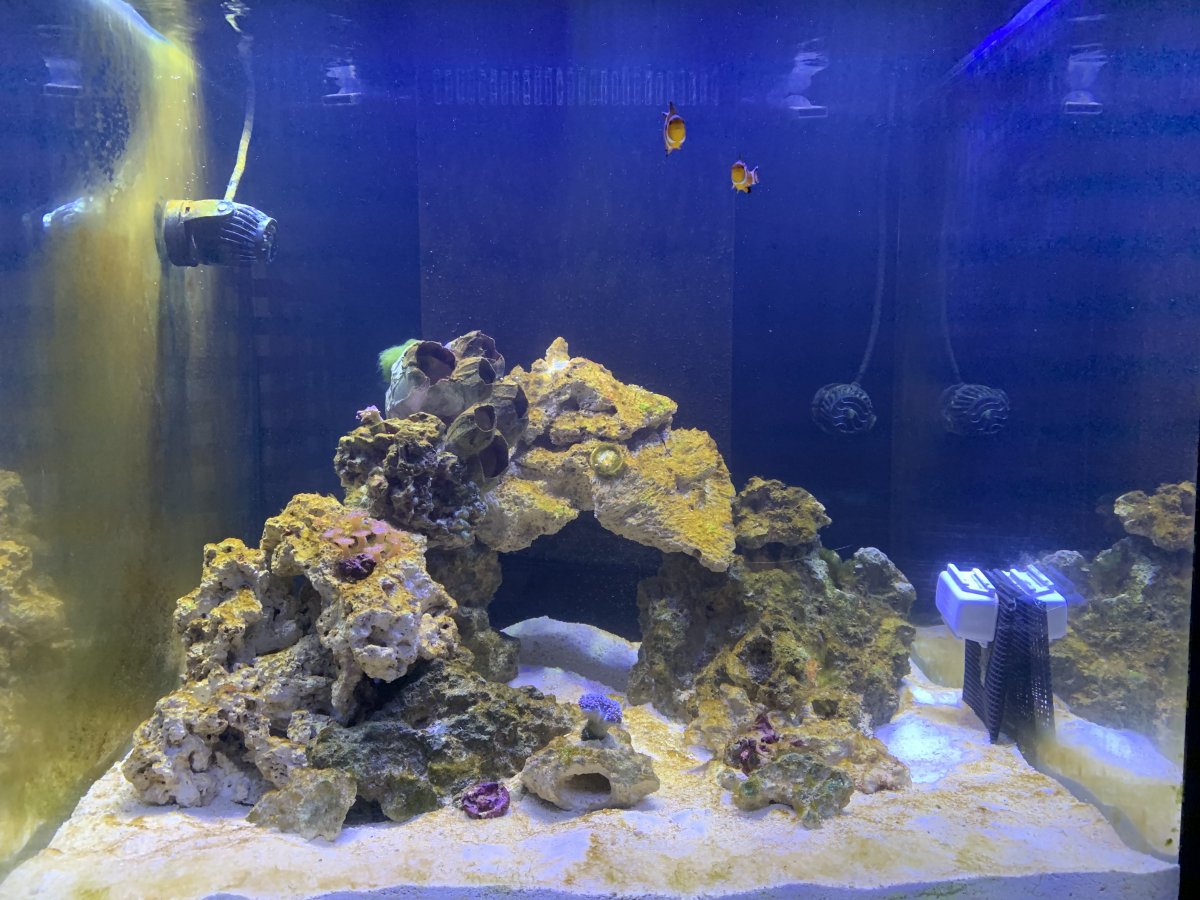 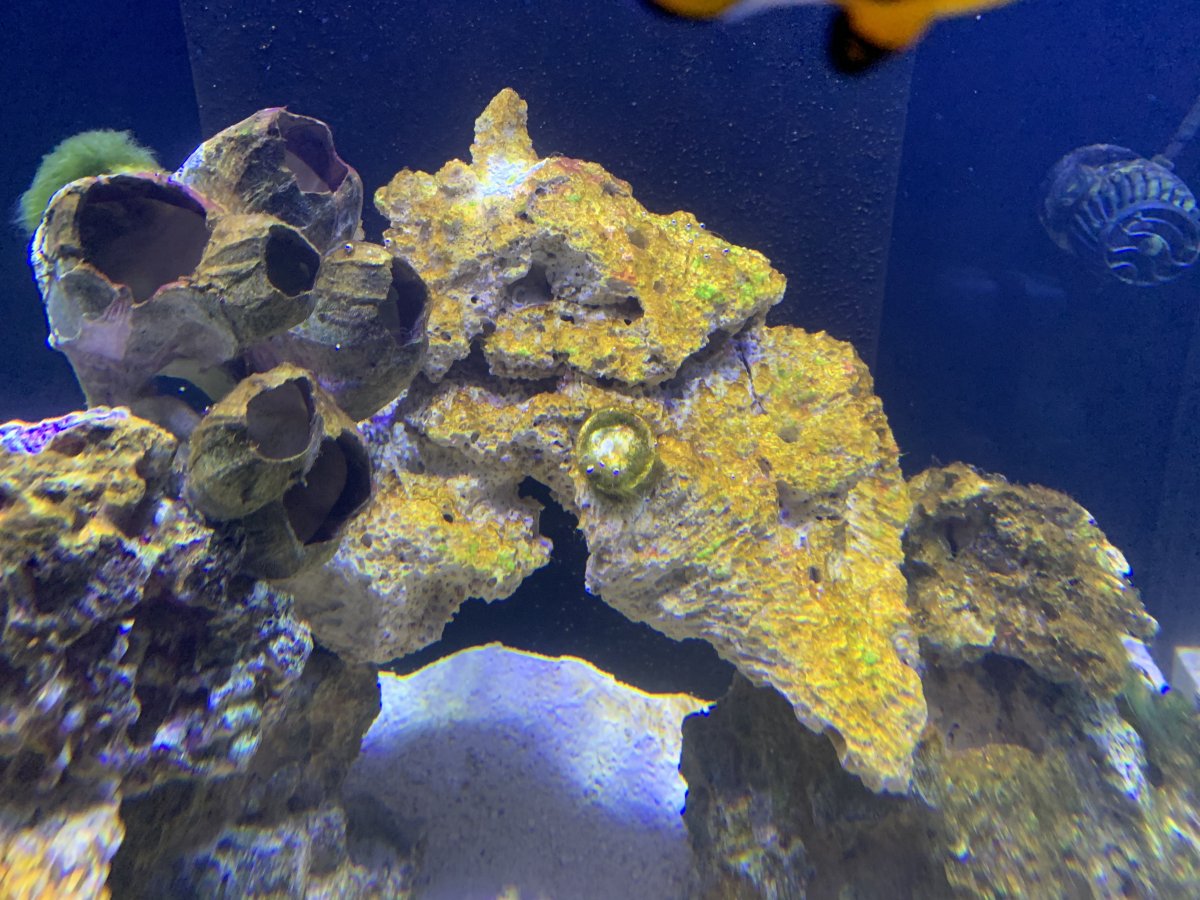 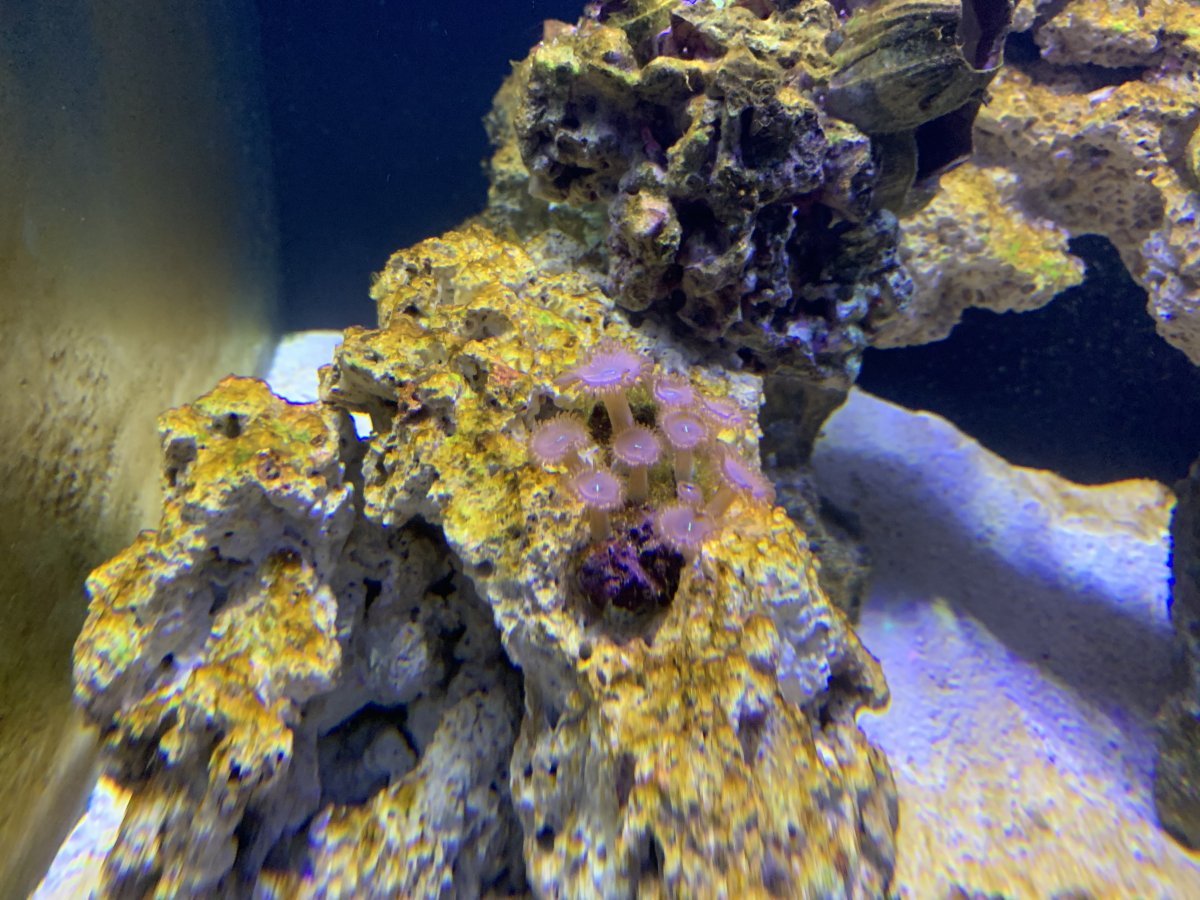 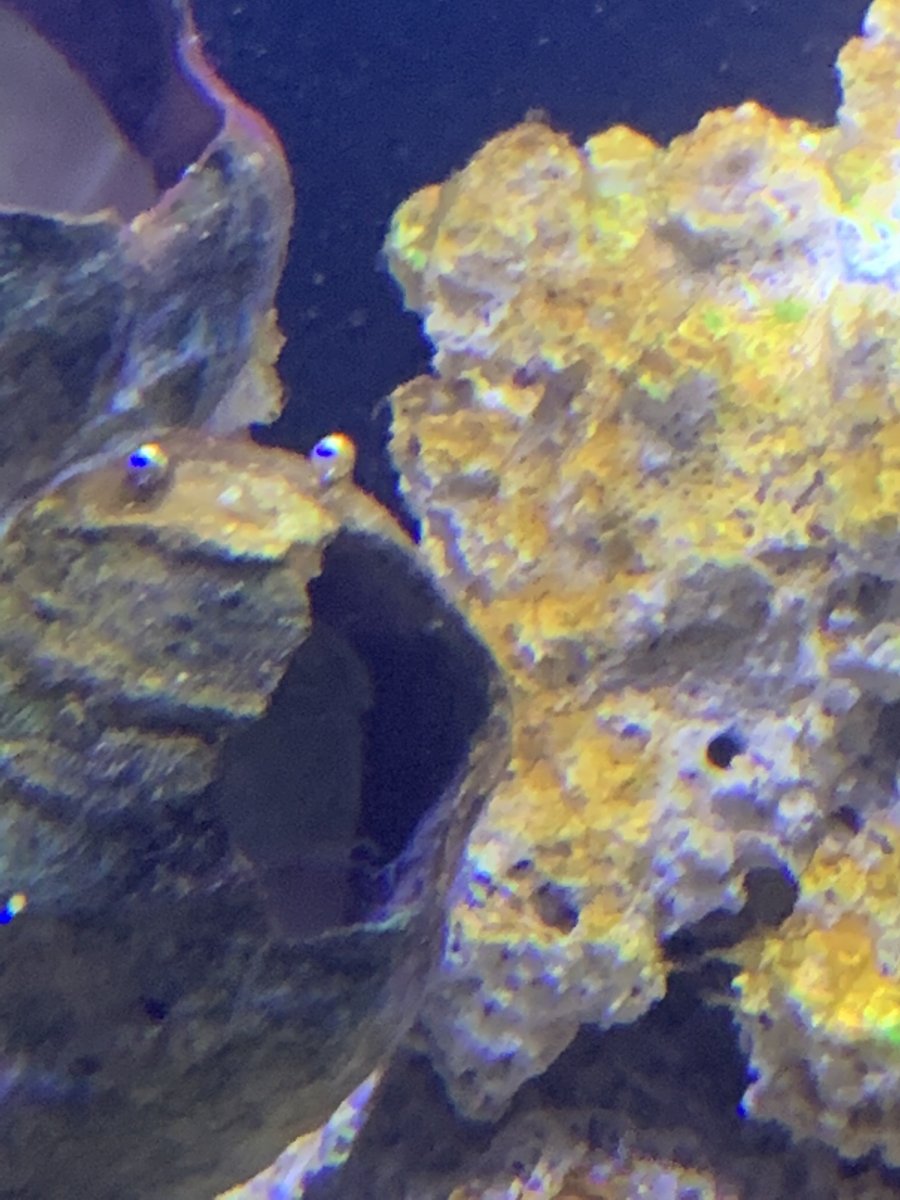 on the fresh side, the pallis are flirting, awe. Seems the malachite green has gotten the lady to feeling some better. Hoping for a spawn in a day or so, and hoping the male holds. I’ll have to pull more assassin snails since they really enjoy caviar. 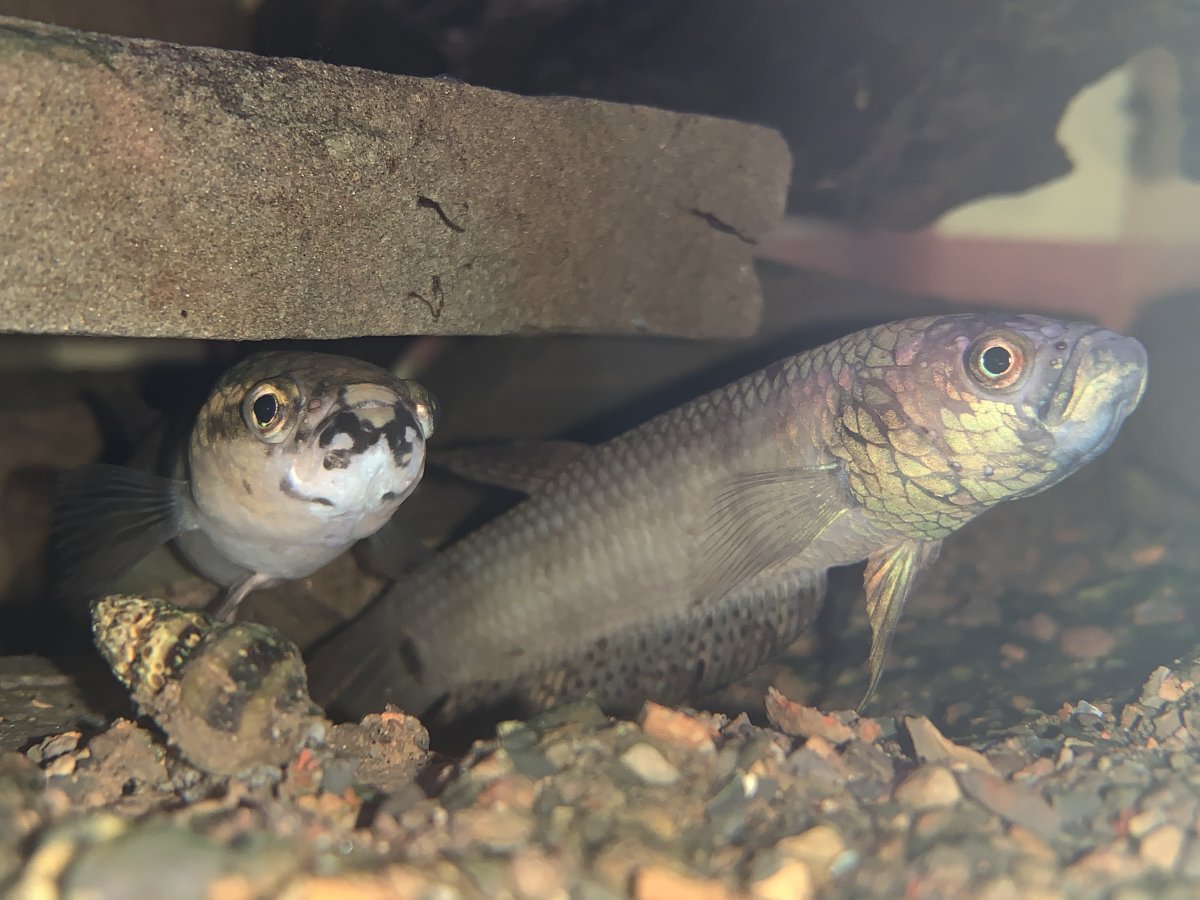 LadyMac said:
and the barnacle is just as shocked about it as most of you will be too XD.

Dying laughing. What a capture!

small update today.
First off, thank you to whomever gifted me a refractometer and the calibration fluid! Over the past couple days I had noticed that the frammer wasn’t too happy. I had upped the white light some, and moved the powerhead, but I’m not sure that was the entire issue. Upon advice here, and thanks to @Katrina71 I ordered some Reef roids, and also some Red Sea a+b. Since it’ll be a few days before either arrive, and noticing that today it looked a little more mad I decided to knock the white down to 30%. I also moved it back under the arch way so it’s shaded some. It’s slowly opening up more. It’s getting good flow but not being beaten. Hopefully it’ll hang on and wait for the new goodies. I also noticed that I had some floating debris in the tank so I put the felt sock in to polish it some. Rinsed the foam pad really well, and smooshed it down some in the sump. Getting less micro bubbles from the skimmer now. I also rinsed out the mesh sock. I checked the salinity yesterday and it was a little low, at 30. Topped off yesterday a couple times with saltwater and today and now it’s up to 35. Skimmer is pulling out some nice green brown icky stuff.

I guess it’s a bigger update than I thought lol. Anyhow, a couple pics

Yesterday pic on top, today below it on the euphilia. 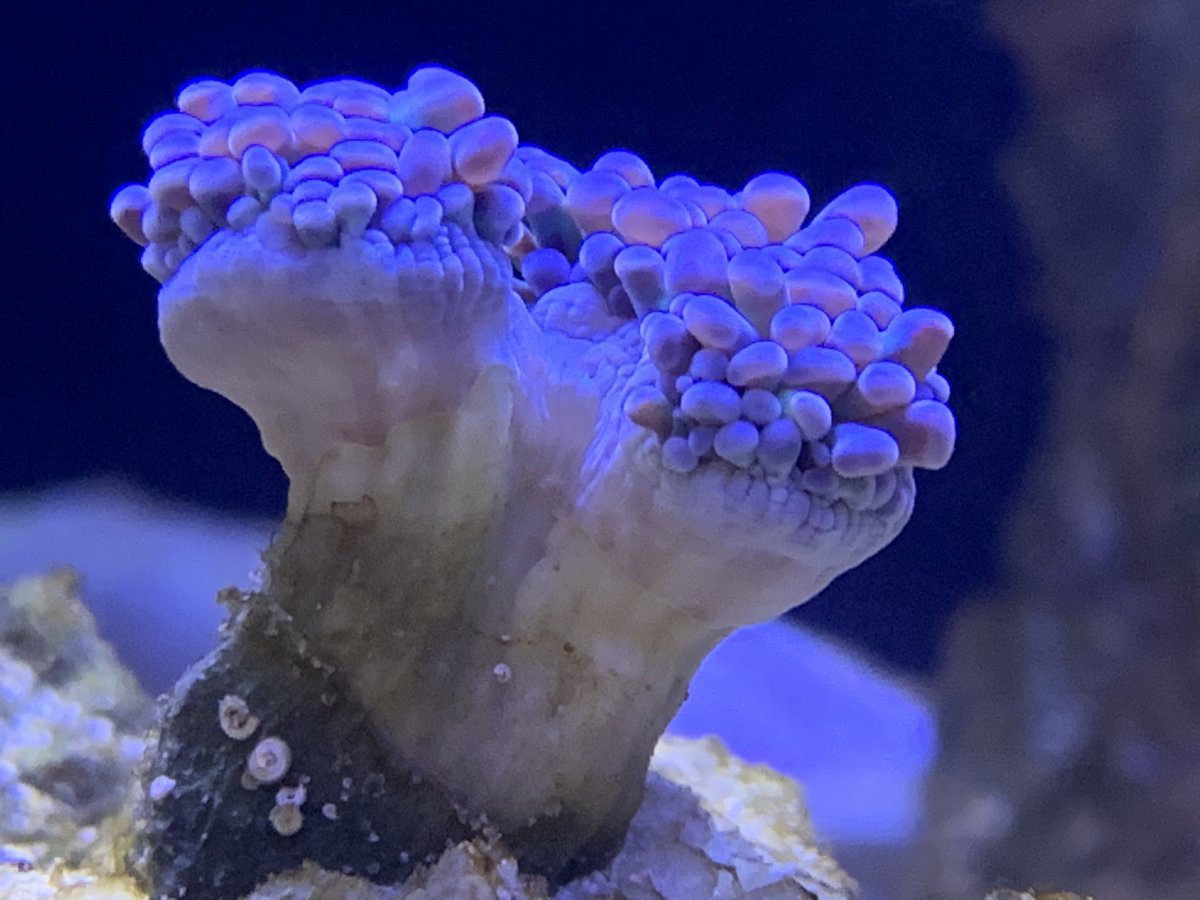 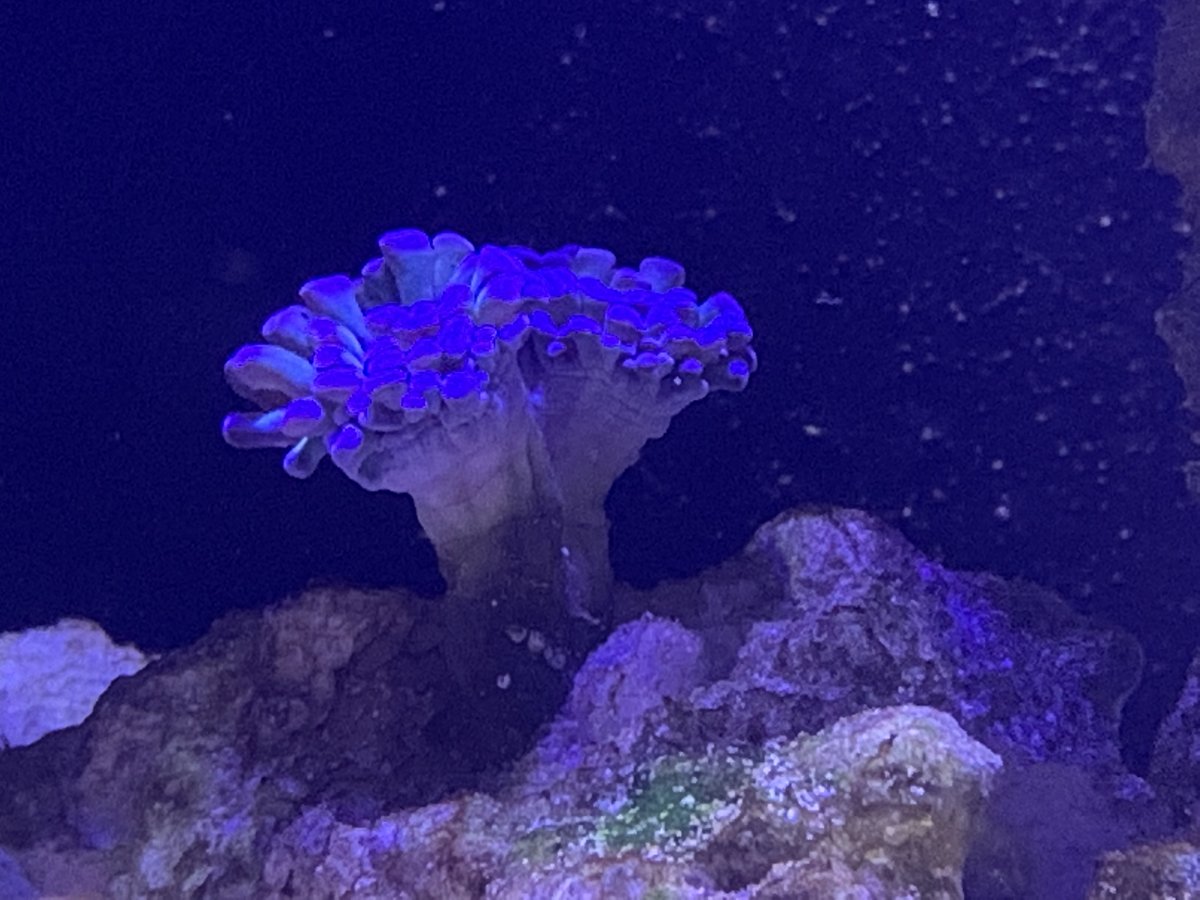 Obligatory paly shot. Thanks, dad for this lovely coral. It’s as tough as you were. 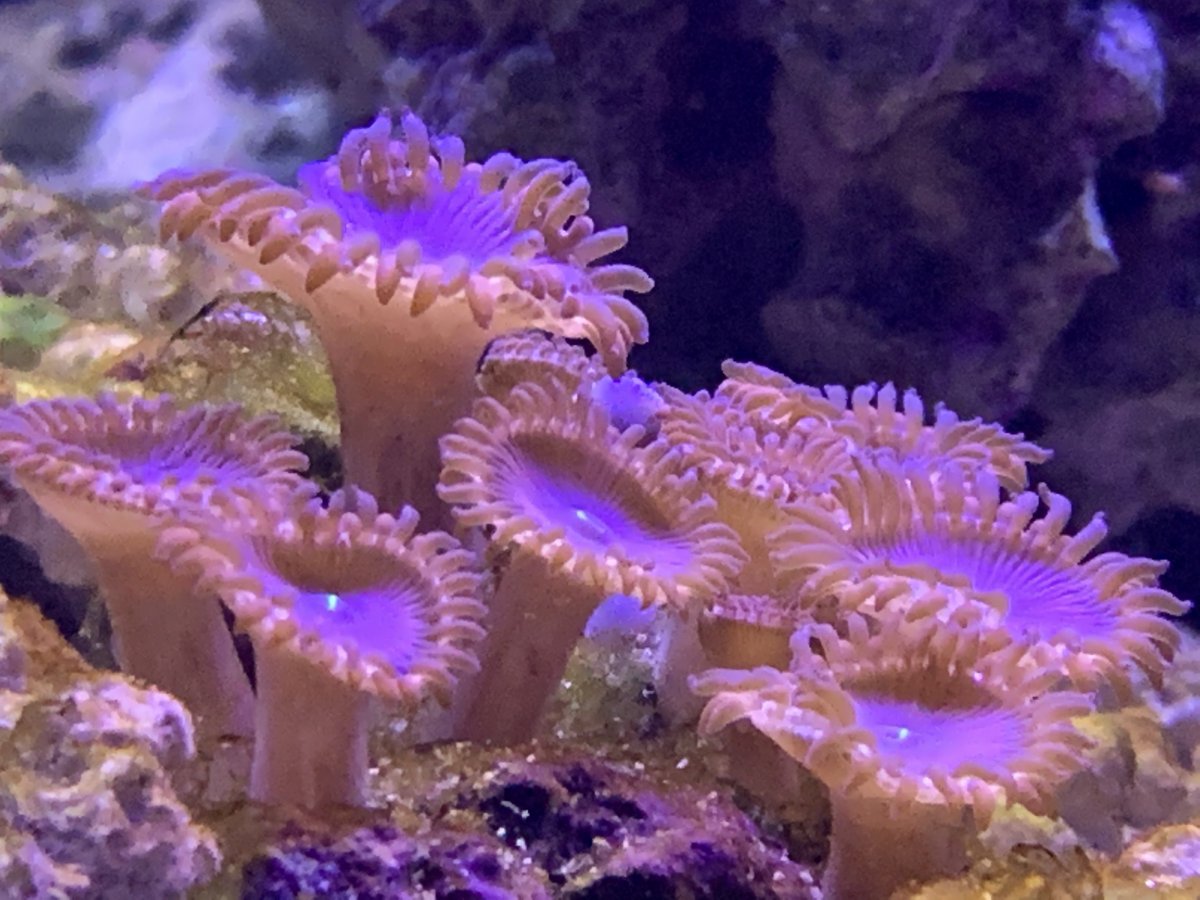 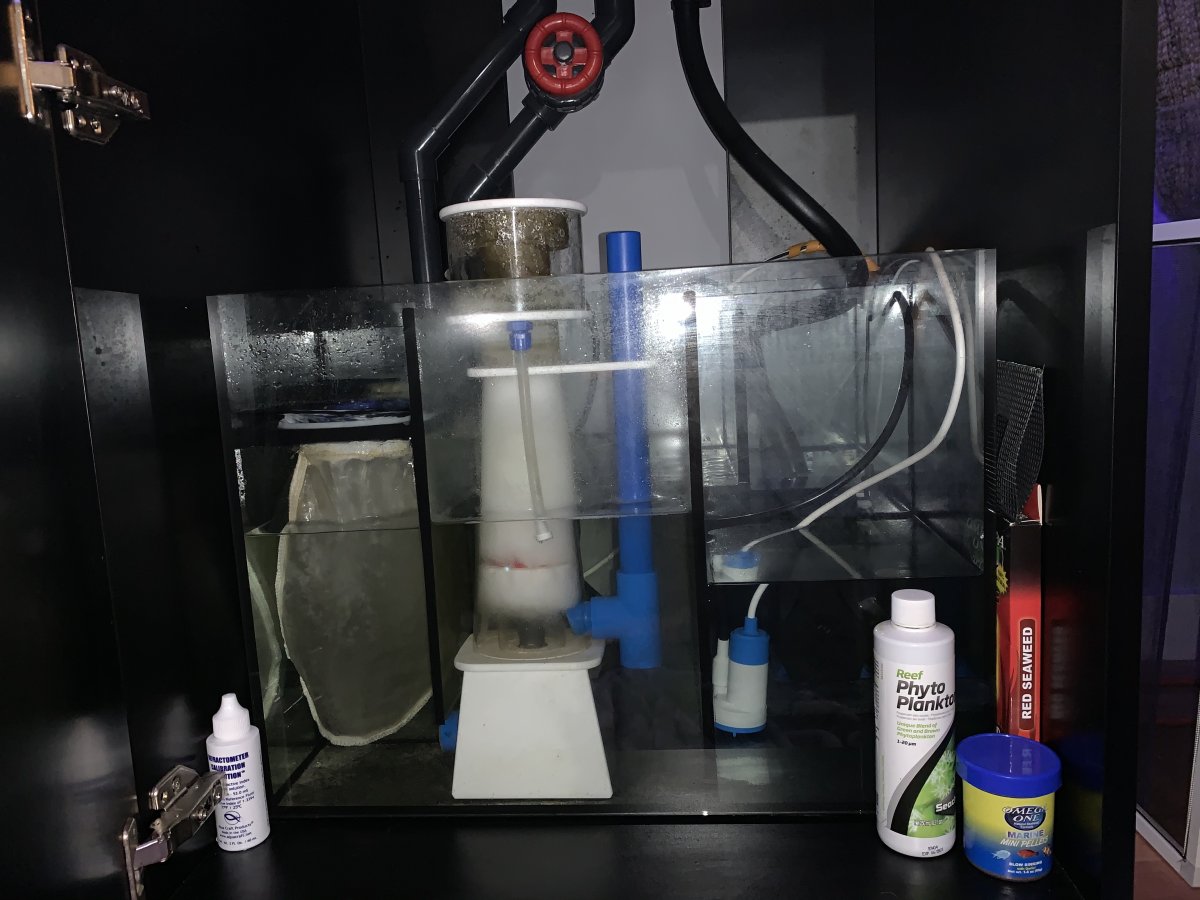 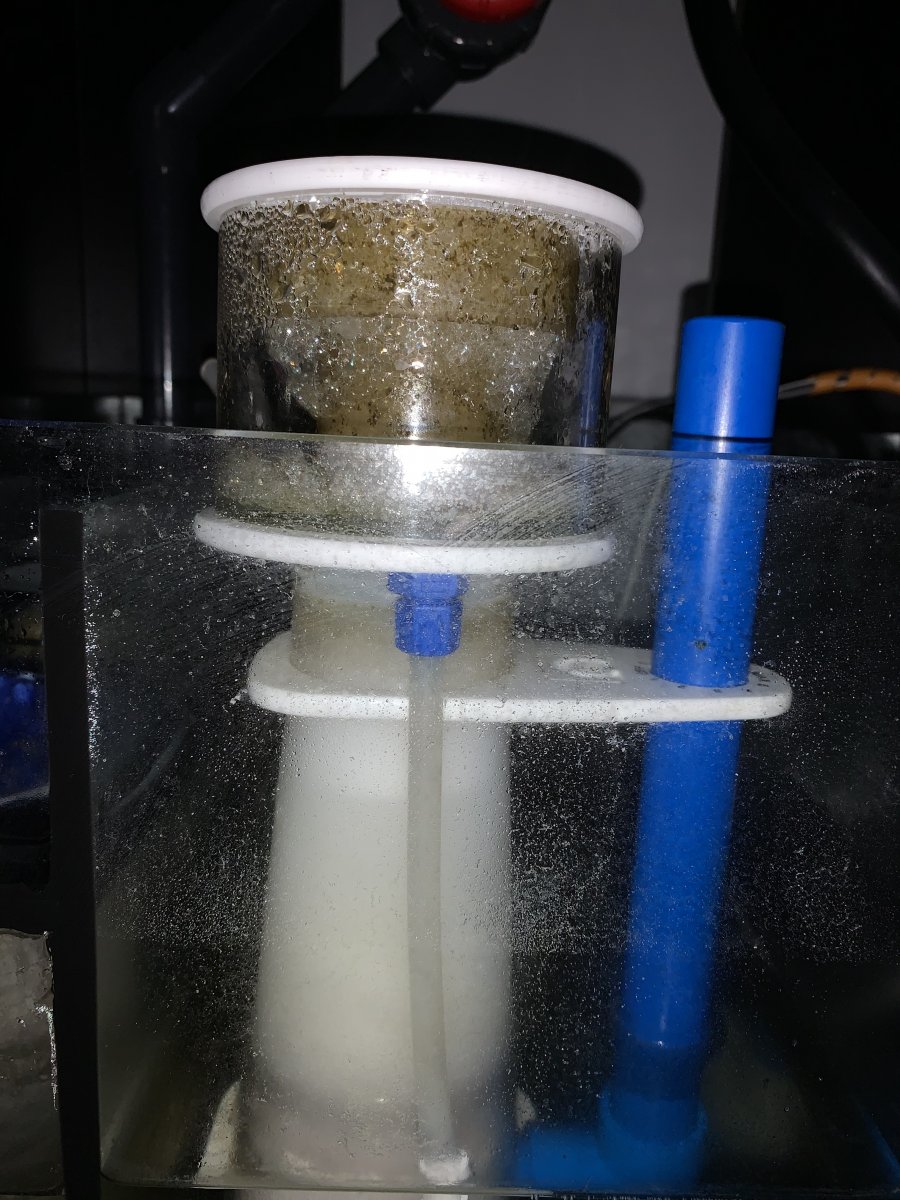 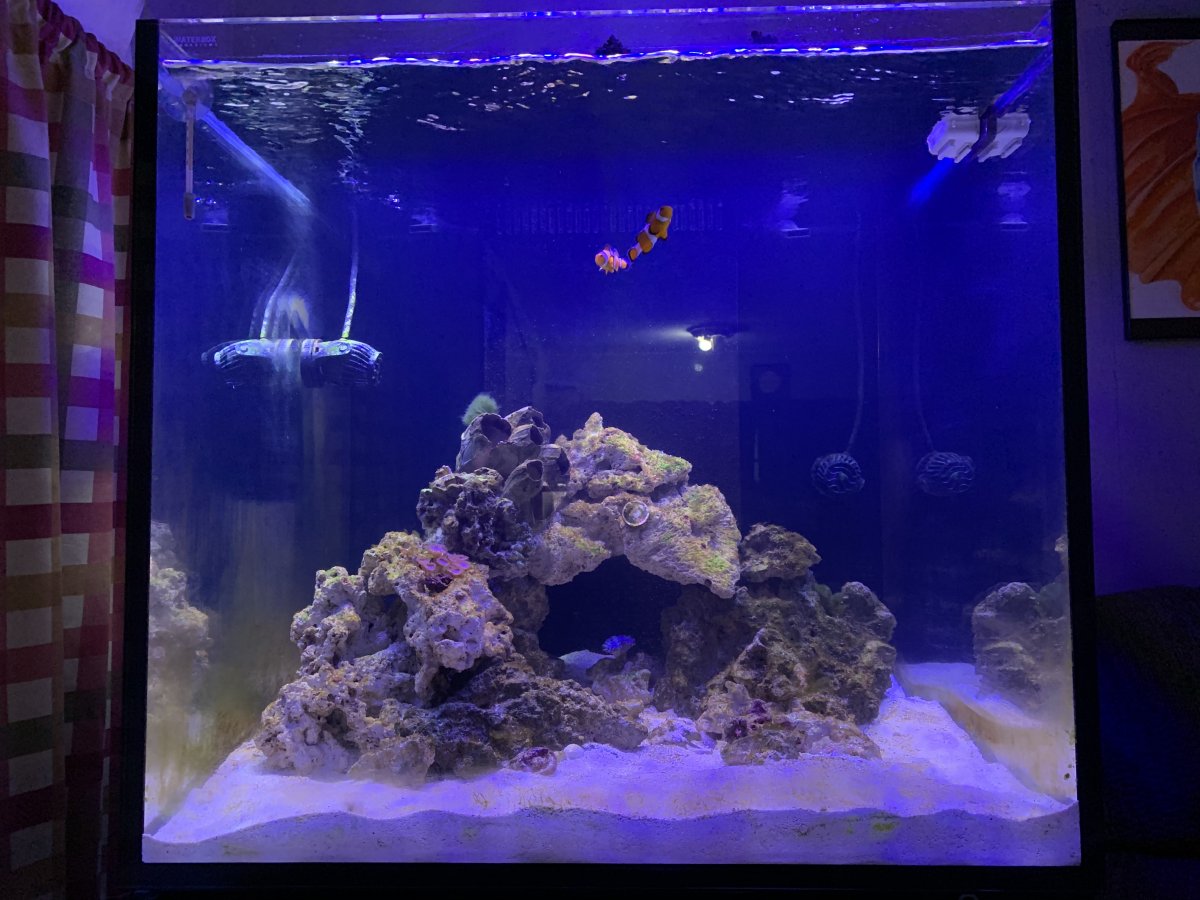 You're more than welcome!
OP

i put the old orbit marine on the rank today with the IC Loops. I need to contact current. I need extenders and another set of brackets for this light, but I’m happy with how it looks. Of course it won’t be on the same schedule with the loops but that’s fine with me. I believe I set it for coral acclimation so the whites will be in for about four hours. Then the blues for awhile. 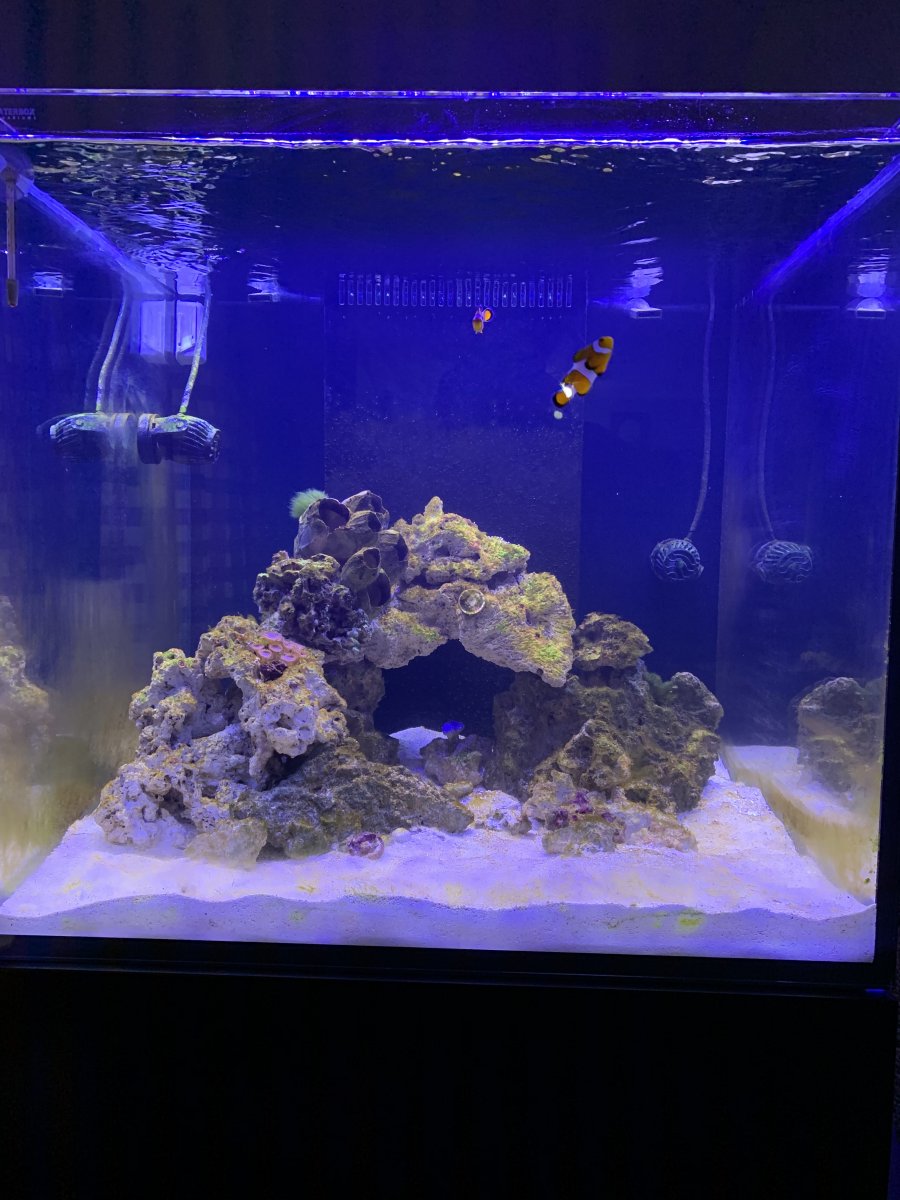 I think my blenny is gone She has been in the barnacle since yesterday, no movement. I can’t see too well in the chamber she chooses. So on this lovely day I get to unplug the ato, move a rock and pull the barnacle. If she’s gone I’ll bury her in the yard. Also my frammer is closed tightly still. I fed the tank some reef roids uestwrday, spot fed it and the others then added a little to the column. The only coral doing well is dads paly so I’m happy with that. Sucks on all the others. Sigh.

On the fresh tank I haven’t switched the filters yet, I’ve been in too much pain to do it. I did pull cyano yesterday and for some reason the little guy who was alone was so unbearably unhappy he started bouncing off the lid. So I put him back with the pair. They are sparring but he’s not in total hiding. I think a rescape will help with that. I just have to feel up to it. My tank is in shambles anyhow. I’ll get there. Today may be the day. It’s also hubbs birthday, so I’m not sure how much time I’ll have for fish related things anyhow.
OP

Ok so she’s alive. I’m thinking more along the lines of bullying, because I did have the clown that was on her butt when she was out, and at the time I didn’t think it was bullying but it’s probably what it was. So I sumped her and a couple rocks. Now I have to find a light and a plug for said light. I may pull the orbit and put it in there for now. Also have to figure out how to keep her away from the skimmer but people are hungry and I got rushed out of the house.

I’m not sure what fish I could put with these clowns if they are going to be aggressive to a blenny that stays in the rocks :/

I’m not sure what fish I could put with these clowns if they are going to be aggressive to a blenny that stays in the rocks :/
Click to expand...

I’m sorry for your loss.
OP

Thank you. She was the coolest Little thing. I feel so bad that I let this happen.

We all do our best. Clearly you have proved yourself a good Momma.