Obsession: Your reef is better because you quit doing this?

1. What is something that you QUIT doing that caused your reef tank to do and be better?

2. What do you obsess over when it comes to your tank?

A reef to inspire you via @TUSI 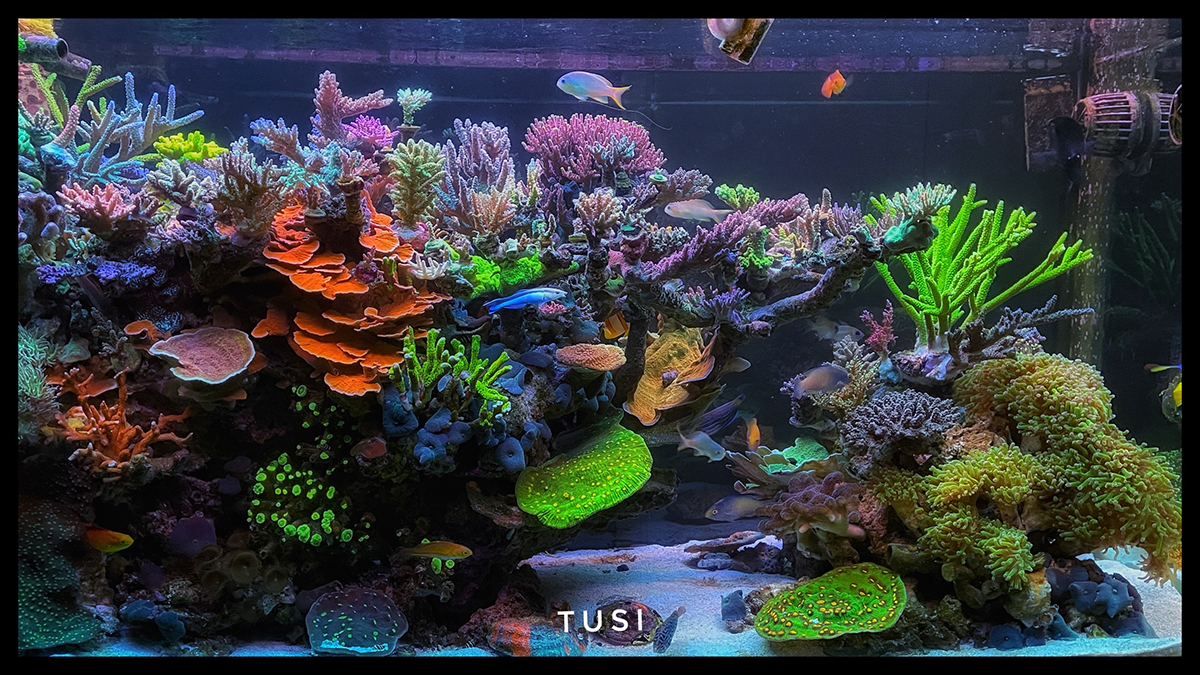 I have stopped relying on chemical media for quick fix solutions to an issue. I have tried to go with a more natural focus with only a bag of carbon in my sump and my skimmer. Controlling other things with proper feeding habits and tank husbandry as needed.

I quit putting Kalkwasser in the ATO reservoir. In my system (everyone's is different) the kalk caused ATO sensor failures that caused massive pH swings and other imbalances in the aquarium. Now I am dosing AFR in small doses throughout the day. It's only been a week but I'm already starting to see improvement.

I quite running gfo a few years ago. The coral seem more fluffy and enlarged.
OP

This is already good stuff!

Stopped worrying about the little stuff go with the flow if ain't broke don't fix it, if things are looking good leave them alone.

stopped over reacting to issues

Chemical treatments. In the best cases, they don't address the root of the issue. In the worst cases, they cause other larger problems.

I am also certain that my tanks would be at their best if I'd leave the scape alone, stop relocating coral, etc. But that's probably not going to happen.

Stopped chasing numbers. Stability is much more important than chasing after those perfect parameters.

Stopped taking advice from videos by people trying to sell me a $900 light.

.......Quit making impulse purchases. Every headache I have had is from being trigger happy and wanting more. Excuse me while I go pluck out a few of these flatworms off the glass.

The key to a successful reef is to never leave

I quit putting my hands in my tank (as much).

Dont take advice from an untrustworthy lfs. Recommended me tons of things i dont need

Water changes. As a beginner I'd read a lot about how bad nutrients were for a reef tanks, but didn't realise what would happen if you have no nutrients. A serious attack of the gunge put me on the right track, and I now dose AFR and only change enough water to keep nutrients at the right levels.

I grew up within miles of the Gulf of Mexico. I have been through major hurricanes, strong summer showers. I have an obsession with recreating extreme turbulent waters that disturb the whole tank. I had to throw out my 3 pump that I used to simulate the strong surges. Every time I would see the weather get bad outside, I would stick the extra pump in and just leave it causing all sorts of chaos. My philosophy is "It is natural". I stopped doing it around June, and I have had the biggest issue with detritus build up in my tank. I'm sure I have some other compulsion with my tank I don't even notice yet. I'm not OCD per say, I just like to sets something in motion within a ruleset and watch it progress over time.

Stopped testing everyday trying to get perfect numbers - caused stress and too much tinkering now I just dose kalk via top off and essential elements weekly. The corals will tell you if something is up!

What did I quit doing? I guess this qualifies -- I quit using Coral Pro salt and switched to the blue bucket. I started my tank w/the Coral Pro b/c it was recommended to me and I thought it would be better for corals. Cal and Mag precipitated like crazy and I was dosing a lot daily -- separately on top of AFR -- just to keep up. My life is so much easier since I switched from that salt. Now I only dose AFR daily in my nano and everything is effortlessly stable.

Obsessions? Buying, buying, and more buying corals and other stuff to add to the tank. I always say it's like decorating your home -- when you have ideas about what you want where and how you want it to look, it can be hard to pace yourself.

I’ve stopped chasing numbers, I let my tank tell me we’re he wants to be regarding parameters.

I answered "maybe" because I'm not sure if the pH/alk issue I'm having is due to my meddling or to something else that I've failed to identify. I've been having a problem for some time where pH is low but alk is through the roof. I had been tinkering with different doses of calcium (from the Reef Fusion 2-part system) and Kent Superbuffer for months without resolving the issue. I also tried some non-additive interventions to "naturally" raise pH, such as pointing the powerhead toward the surface of the water and opening the window for an hour a day, with little success. I hit a busy patch at work recently and just left everything alone for a couple of weeks. When I went back and tested, the levels of calc, pH and alk were all a bit low, but no longer seemed out of whack in relation to each other. I added a small amount of Superbuffer in the a.m., and later in the day added some calcium, so we'll see what happens now!

QUESTION OF THE DAY One thing you did that NOTICEABLY IMPROVED your reef tank?
8 9 10 11 12

QUESTION OF THE DAY How long should your saltwater aquarium fish stay alive?
2 3 4

QUESTION OF THE DAY Keep THESE TWO THINGS out of your tank for a better reef? True or False?
2 3 4 5 6